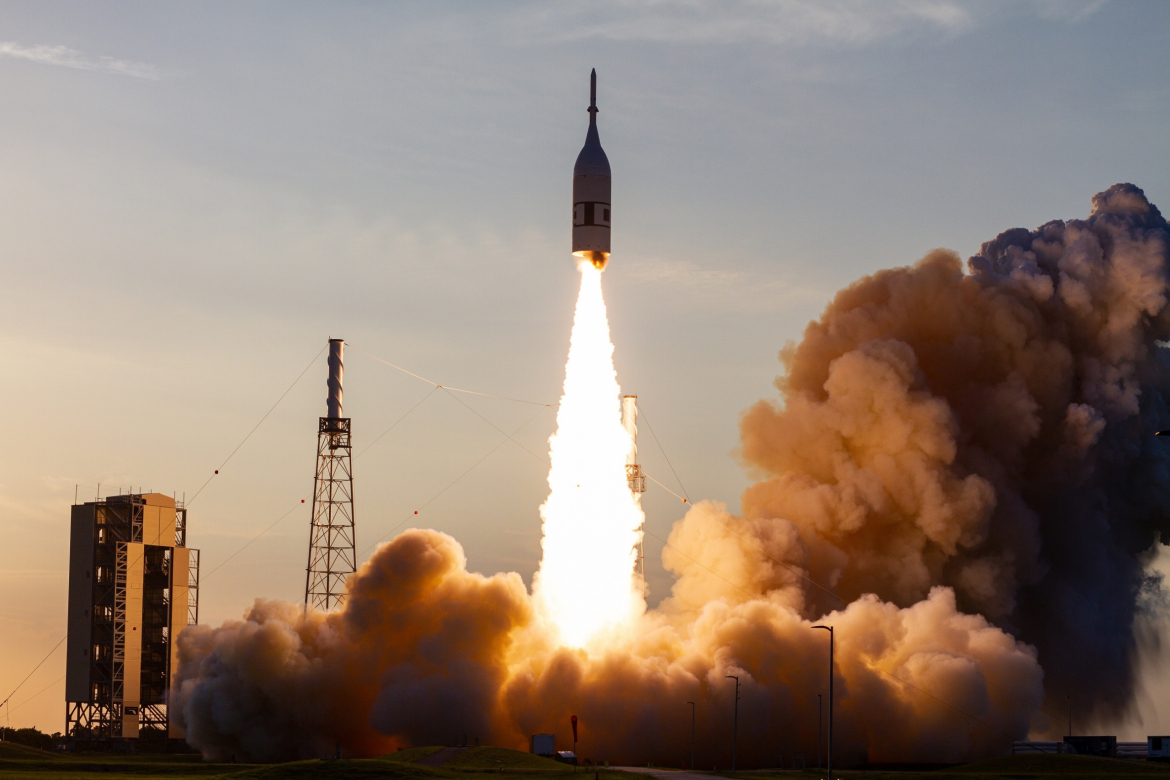 Following the successful July Ascent Abort-2 (AA-2) test of the Launch Abort System (LAS) for NASA’s Orion crewed spacecraft, the space agency is reviewing the data collected with its contractors. The supersonic, low-altitude test carried about three dozen flight test objectives, and engineers are going through all the data collected in the short test to verify those objectives were met.

The triggering conditions for the LAS abort in the test were chosen to provide another stressing case for the abort system, to go along with a pad abort test conducted in 2010.  The flight test data allows engineering reviews to systematically verify that the LAS did its job under those conditions, as well as providing feedback for predictions made by analytical models of in-flight performance and environments.

Analysis of the test data so far is showing that the LAS has better structural margins than the estimates going into the test. The knowledge gained from the test is being factored into assembly of the remaining LAS components for the first Orion crewed launch on the Artemis 2 mission.

The Ascent Abort-2 test used a ballistic missile to accelerate a production-design LAS with a Crew Module shaped, highly-instrumented test lab to carefully picked flight condition where a full LAS abort sequence was executed. “The Launch Abort System (LAS) for AA-2 functioned precisely as designed and predicted, the team saw no anomalies,” Robert Decoursey, NASA Manager of the Launch Abort System for the Orion Program, said in a recent interview.

The LAS has three different motors that fire at different points in the test, the abort motor, the attitude control motor (ACM), and the jettison motor. When the abort off the Abort Test Booster (ATB) was initiated, the abort motor generated close to 400,000 pounds of thrust at ignition to get away, while the ACM also fired to control the flight of the vehicle.

Both built by Northrop Grumman, the abort motor fires for about five seconds while the ACM fires for longer to steer. The ACM then reoriented the whole test article with the blunt end of the Crew Module flying forward, followed by firing of the Aerojet Rocketdyne jettison motor to separate the LAS from the Crew Module simulator. 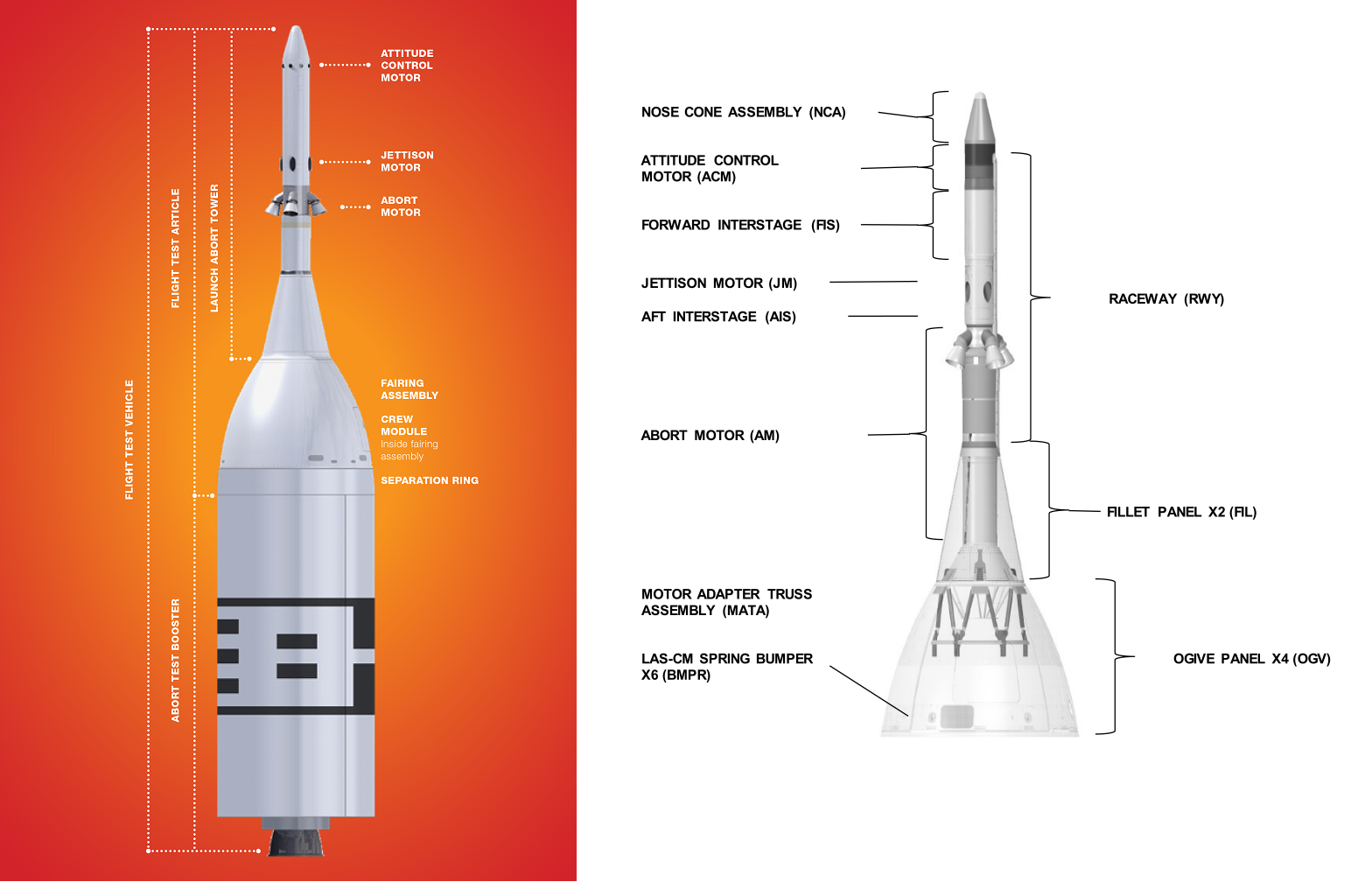 Overall test preparations were slowed down by a five-week long partial government shutdown from Christmastime through most of January, but the full vehicle for the flight test was mated at Cape Canaveral Air Force Station’s (CCAFS) Space Launch Complex 46 in late May and the test was rescheduled for July 2.

Once the Orion flight test article and the ATB were physically mated, all the other connections were completed and checked out during a stormy month of June. “That was surprising that [in] May we had no delays because of lightning but June was like the total opposite,” Don Reed, NASA AA-2 Project Manager, noted.

“We had factored in margin for the weather because we knew that we were more likely to get thunderstorms in June just from historical data and so we actually planned in about a week of weather margin and thank goodness we did. As it turned out we did have enough schedule margin to account for the delays due to all the thunderstorms.”

Prior to the test, the test team ran through a set of simulations. “We actually had two ‘green card’ sessions that were a week apart and then about a week later a last nominal Mission Dress Rehearsal,” Reed explained. “The first one was I was glad when it was over because they were throwing a lot of stuff at the team, a lot of what we call green cards, anomalies, and so the team learned a lot.”

“It was really good because the team really learned how to work together and how to handle the different anomalies.” 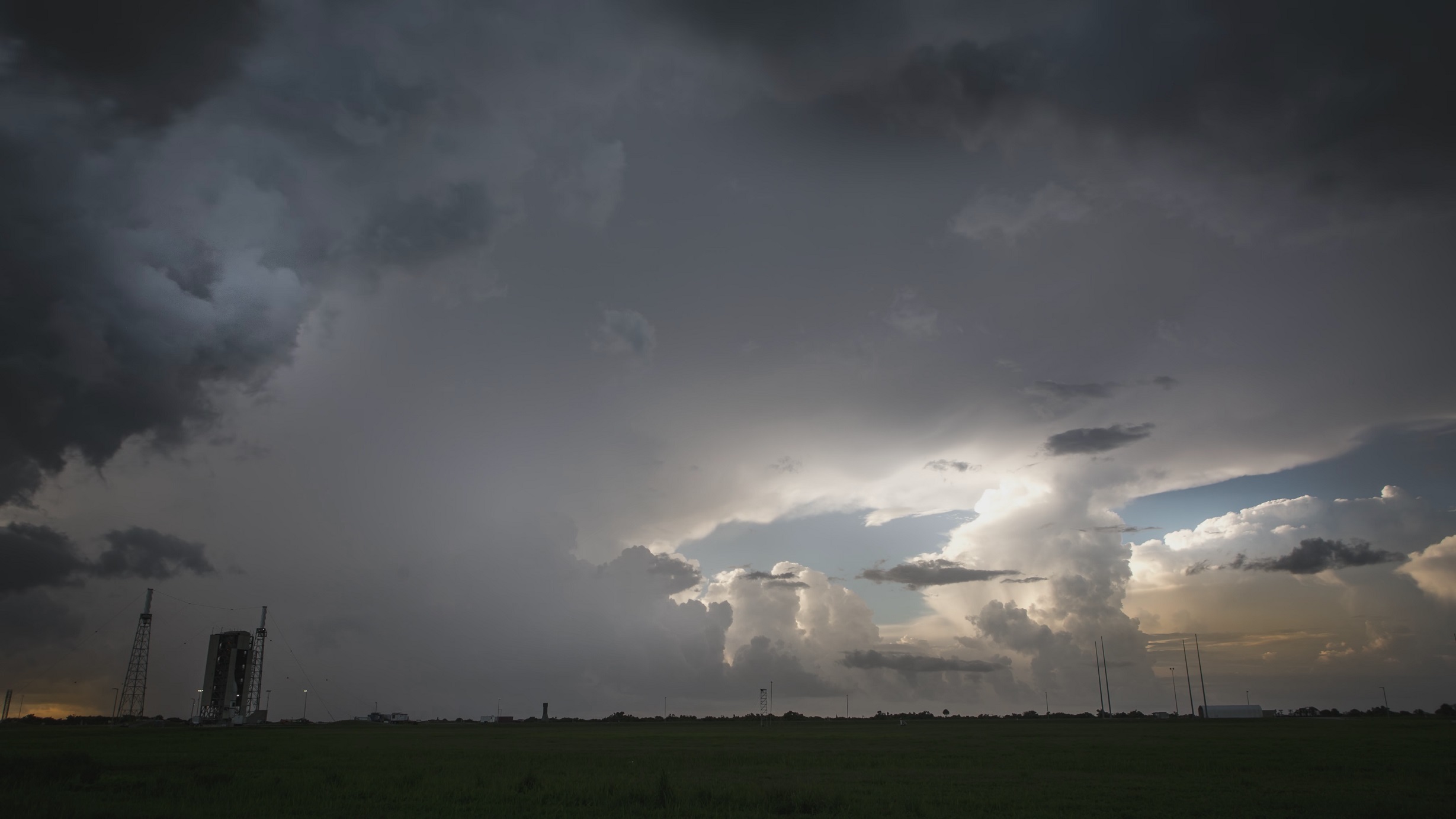 (Photo Caption: Seasonal weather in the Space Coast area in June, as seen from Space Launch Complex 46 at Cape Canaveral Air Force Station. Additional contingency time was built into the schedule for final launch preparations to account for periods when lightning warnings would suspend operations.)

The test focused specifically on the launch abort capabilities that the LAS provides for Orion. When the booster for the test reached the chosen conditions, the flying boilerplate running Orion GNC software sent the abort command to the LAS.

“We spent quite a bit of time trying to come up with a test condition that would be the most useful and stressful without exceeding obviously the capability of the system,” Griffin Corpening, NASA AA-2 Systems Engineering and Integration (SE&I) Team Manager, explained. “And so the test conditions that we chose we did meet almost on the dot, ATB delivered us to right where we wanted to be in the sky dynamic-pressure wise and Mach number-wise, just a little past Mach 1 and dynamic pressure of around 620 psf (pounds per square foot).”

The ATB performance was a little ‘hot,’ reaching the abort condition a few seconds earlier than pre-flight predictions. “We conditioned the motor to within the range that we analyzed,” Reed noted. “It’s just that the motor performance varies.”

“Any given motor will have a variance in terms of the thrust and so this one was on the high end of the thrust curve, the nominal, dispersed thrust curve if you would and so that’s why we call it a hot motor. But the Guidance Navigation Control was designed to be able to handle the full dispersions on the motor thrust. They actually did a good job here accounting for that on this one.”

In addition to the real-time performance of the LAS and the spacecraft’s abort GNC software, the deliverable from the test was a large data set. Along with video recorded from several ground tracking cameras, onboard test data was collected at high-frequency from nine-hundred sensors measuring temperatures, pressures, accelerations, and acoustics.

The data was recorded through telemetry transmitted to the ground from the boilerplate and onboard data storage devices that were ejected from it on its ballistic arc before impact with the water destroyed the test article. 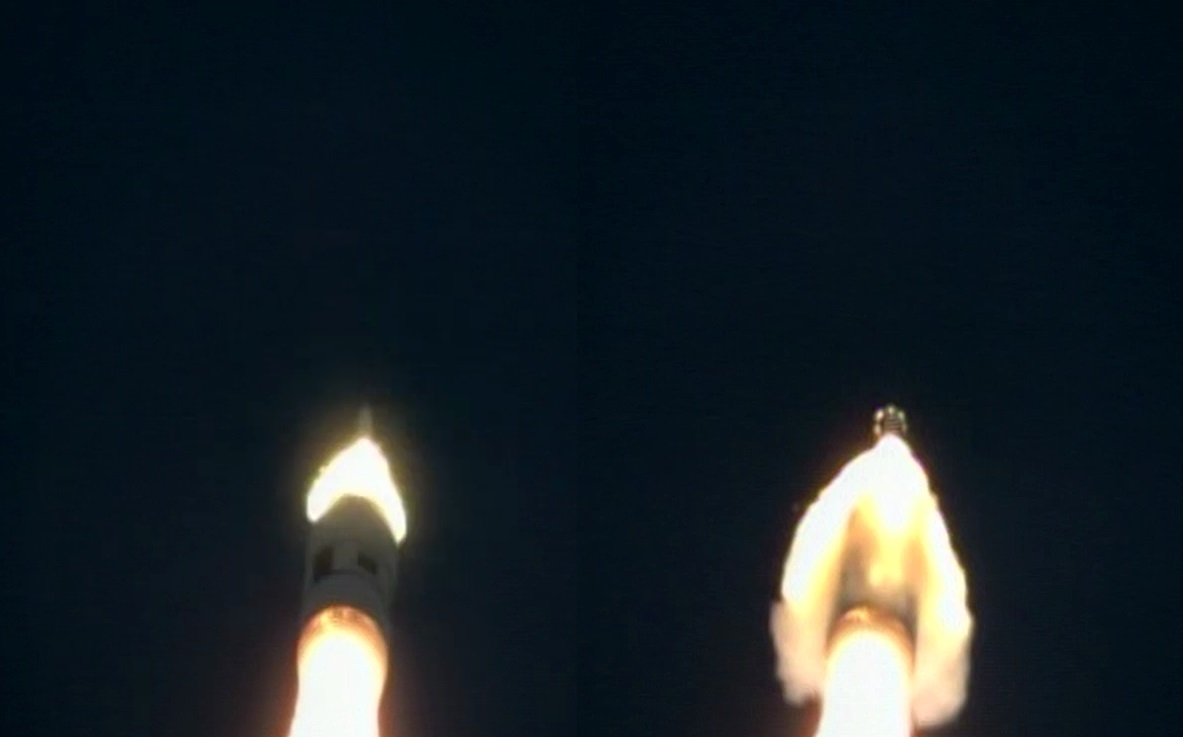 (Photo Caption: Initiation of the LAS abort sequence during the AA-2 test as seen from one of the Eastern Test Range tracking cameras. On the left, ignition of the abort motor; on the right, ignition of the attitude control motor. In addition to firing the two motors, pyrotechnic devices were also fired in the same time-frame to separate the combined LAS-Crew Module test article stack from the Abort Test Booster and Separation Ring test article.)

One dozen data recorders were ejected in pairs from the test article before its water impact. The ejectable data recorders (EDR) were designed to float and had beacons to expedite locating them for recovery; all twelve were quickly recovered from the water within a few hours after the test.

Telemetry from the sensors was also transmitted in real-time from the test article to ground stations during flight; however, with recovery of all the onboard storage devices, the last ones to leave the test article provided the best data coverage of the test from the flight test article.

“The way we set up our telemetry (TM) off the launch abort vehicle was to buffer data [from] a little bit before separation through LAS jettison and then rebroadcast that critical data,” Corpening explained. “Whereas the ejectable data recorders are recording the data real-time right up until they are ejected.”

“So what we did is we took the final ejectable data recorder data, which contained the most complete data set, without any dropouts of course because it was recorded on board and that’s the data that we actually used to do the post-flight processing. Now obviously had we not recovered those recorders then we would have relied on the TM data, but as it turned out we had pristine data for a long duration coming off the ejectable data recorders.”

“We didn’t have ejectable data recorders on the Abort Test Booster data, which did have some dropouts periodically but the critical data right before separation was in good shape from TM down and we were able to get very high-quality separation video footage as well as the data coming off the ATB right before the separation event which is what we were most interested in,” Corpening added. “So from TM and a data acquisition point of view, we got everything we wanted.”

Post-test data analysis and reviews are continuing into the Fall following the July 2 test. “On the Abort Test Booster side, they’ve delivered their final data report, so that’s completed but the subject matter experts are still digging through the details of the data,” Corpening noted.

“We have three major reviews set up, we call them engineering review boards (ERB) and we’ve completed two of the three. The third one is scheduled in November and that will be a final technical review of the data and then the post-flight report will follow that.” 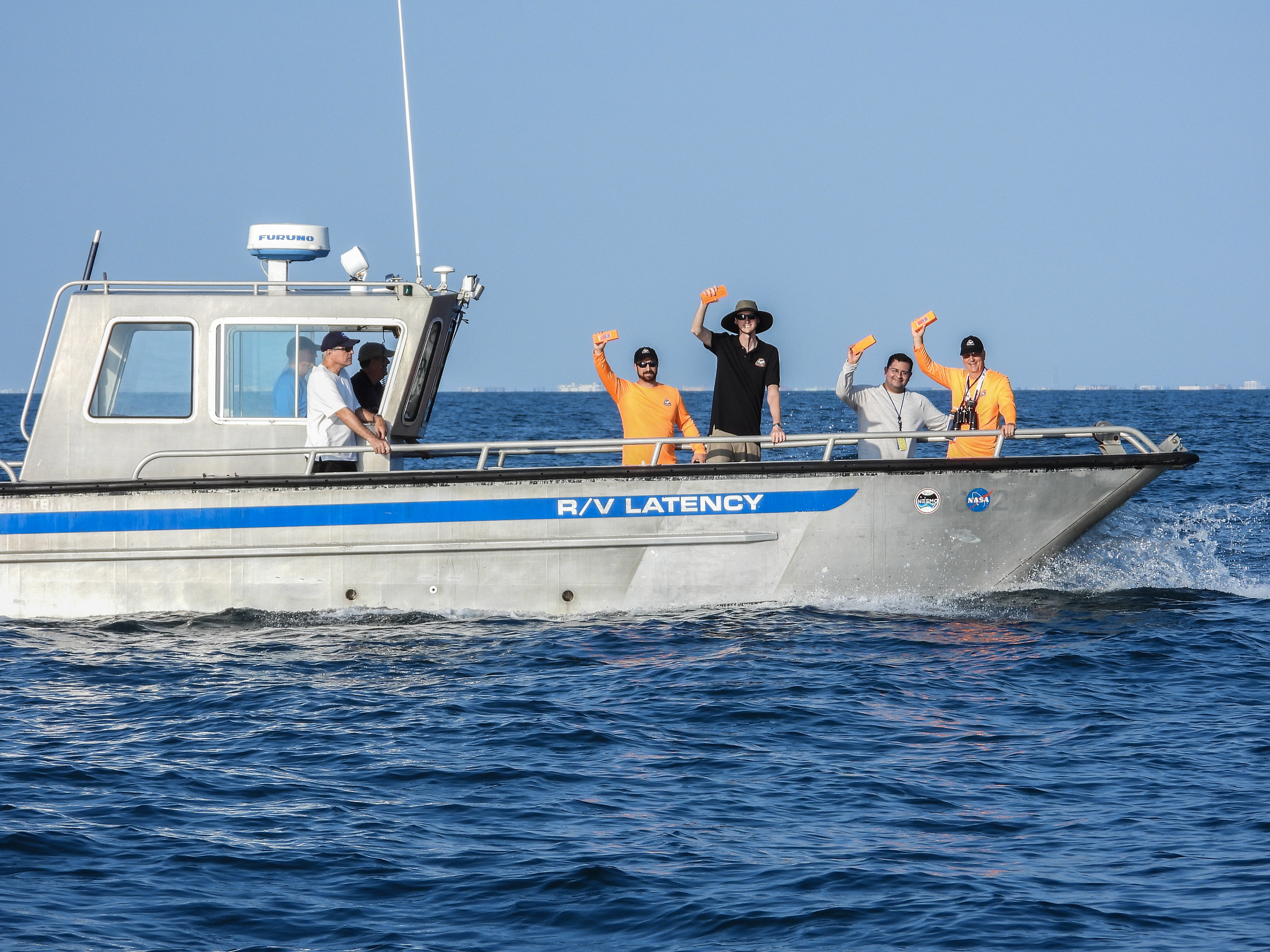 (Photo Caption: The NASA Ejectable Data Recorder Recovery Team hold recovered ejectable data recorders floating in the Atlantic Ocean after the AA-2 test. The EDRs were equipped with beacons to speed recovery and all twelve were recovered within approximately an hour after the test.)

Corpening noted the test objectives were divided into different areas and engineers are working through the process of analyzing the data to determine whether the objectives were met in the test. “The Guidance Navigation and Control (GNC) system, a lot of the performance that’s where it all kind of comes together, so those guys they’re integrating the aerodynamic drag, the abort motor thrust, the various structural bending modes, and all that,” he said.

“Loads and dynamics is another big area. The abort motor creates a tremendous amount of thrust in a very short period of time and the loads are significant but they are coming in within predictions.”

“And then we did have a couple of objectives from a thermal point of view and those looked positive as well.” 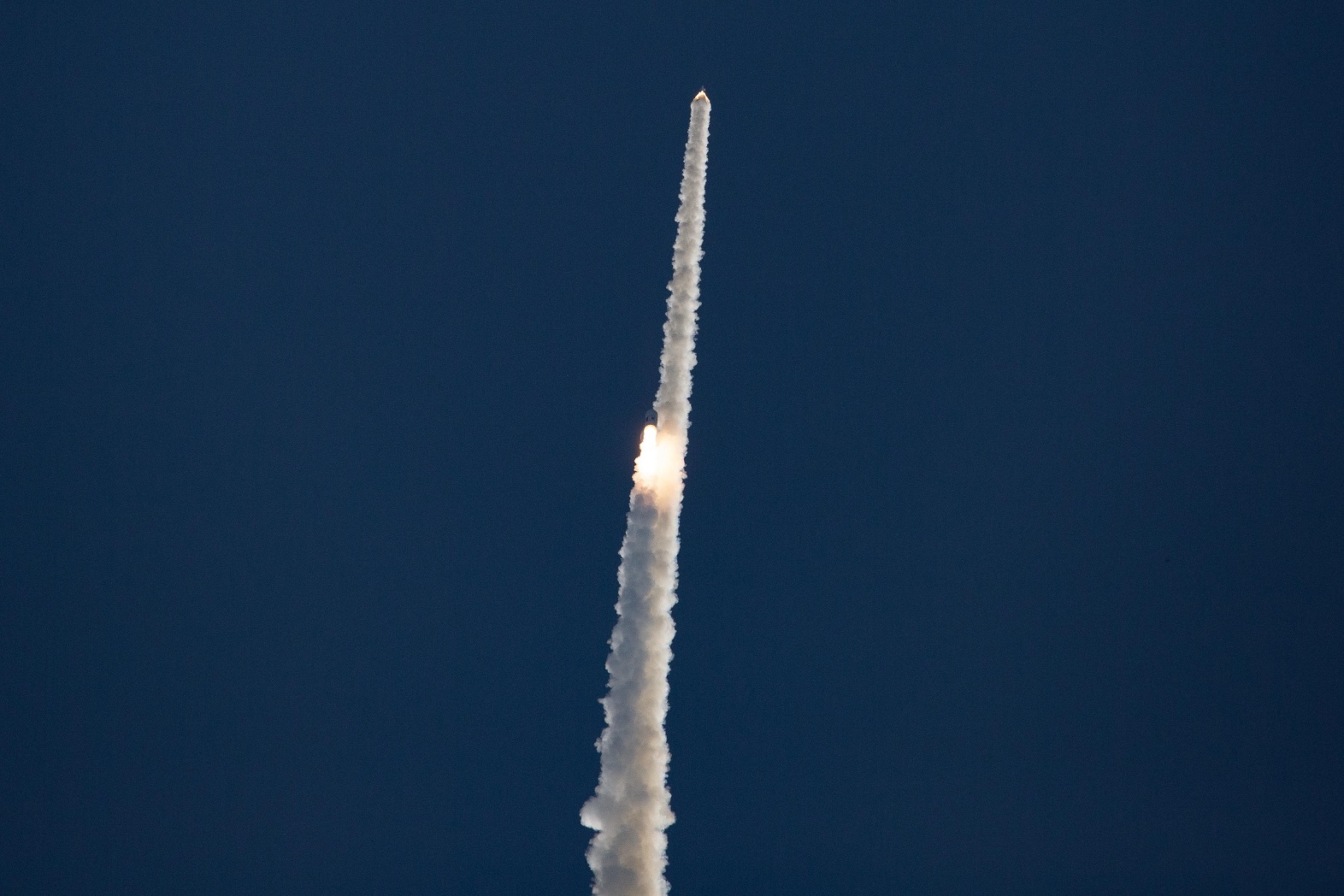 (Photo Caption: The LAS abort motor pulls the Launch Abort Vehicle away from the still-firing test booster as the attitude control motor steers.)

So far, the ongoing analysis is showing that the test measurements are staying within ranges predicted by the analytical models. “There were six critical data items identified along those lines and in all those cases, the AA-2 flight data was either enveloped by the predictions or was lower than [the predictions] such that they are reassessing those predictions,” Corpening noted.

“To the best of my knowledge we never exceeded any of the predictions, we were enveloped by them and/or lower than such that they are reassessing the predictions based on the flight test data, so that was good news across the board.”

Two flight tests of the Orion LAS were conducted, the Pad Abort-1 test in 2010 and AA-2. “Virtual” testing of the remainder of the LAS abort flight envelope is left to the analytical models.

The flight test data also helps to refine the modeling to more accurately predict performance of the system that no one wants to use except in these development era tests.