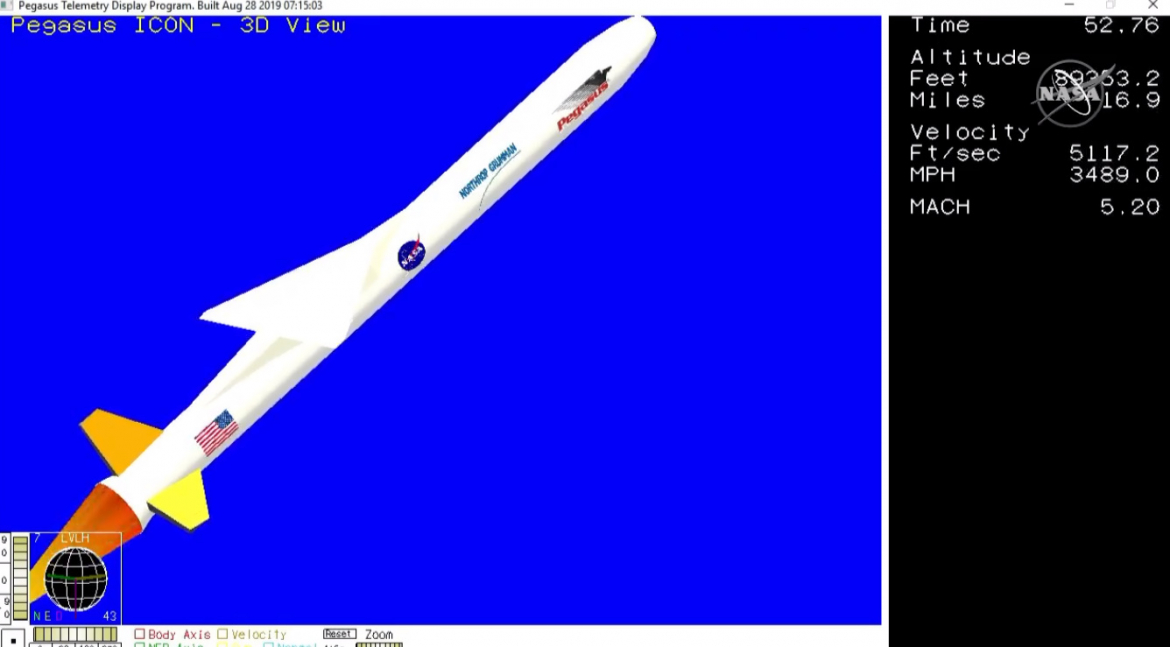 Northrop Grumman has launched NASA’s ICON mission aboard its Pegasus XL rocket on Thursday following a lengthy standdown that began during the initial attempt last November when an electrical short scrubbed the mission. The air-drop launch of Pegasus XL from underneath the L-1011 Stargazer aircraft occurred at 22:00 EDT (0200 UTC), 50-100 miles east of Daytona Beach, Florida.

The road to launch:

The launch attempt off Central Florida’s east coast came after Northrop Grumman Innovation Systems (NGIS) conducted an extensive investigation and analysis of the Pegasus XL rocket to gather data following a continued, persistent issue with the launcher’s actuator position in 2018.

The October/November 2018 issues followed directly behind the original identification of an actuator position error that forced a launch delay back in June 2018 after Stargazer, Pegasus XL, and ICON had already left the United States for the Kwajalein Atoll in the South Pacific for launch.

A complete overview of the previous issue from June 2018 – including exclusive content from NGIS officials to NASASpaceflight – can be found here.

After the seeming resolution of the June 2018 actuator issue, NGIS engineers and flight crew ferried Pegasus XL – with ICON safely inside its payload fairing and Pegasus XL itself securely mounted under Stargazer – to Cape Canaveral Air Force Station, Florida, and the skid strip runway in October 2018.

“Once we [got to the Cape], the guys [performed] the safing operations, [got] all the equipment in place, [got] the ground support equipment, air conditioners, those kind of things ready to go,” said Bryan Baldwin, Pegasus Program Manager, Northrop Grumman Innovation Systems in an interview with NASASpaceflight’s Chris Gebhardt.

During this series of tests, a new issue was discovered within the Stargazer/Pegasus XL/ICON system.  Initial notes to L2 after the issue first presented to NGIS engineers revealed that another delay would occur to ICON’s launch – with an exact target launch date initially unavailable as the teams assessed the issue.

After working the issue for a few days, NGIS, in conjunction with NASA, agreed that a captive carry test of Pegasus XL under Stargazer was prudent to gather data on the issue.

.@NASA and @northropgrumman are continuing preparations for the ICON launch. There is range availability Nov. 3-8, and a launch date will be determined after review of data from Sunday's test flight is complete. Details: https://t.co/2RL9zPICKM pic.twitter.com/cKtR44fQ41

The captive carry occurred from Cape Canaveral over the Atlantic Ocean east of Daytona Beach on Sunday, 28 October 2018.

More than a week of analysis and work on the issue was required before NASA and NGIS convened the Flight Readiness Review on Tuesday, 6 November 2018 and formally cleared the ICON mission for launch.

However, the electrical gremlins, as portrayed, returned during the trip to the drop zone for launch, forcing a scrub.

Realization that the issue would take a while to fix resulted in Stargazer, Pegasus, and ICON, heading back to California.

The NGIS team took a year to thoroughly track down the hard to identify issue.  After correcting it, the team verified the fix via computer analysis and captive-carry flight tests out west.

The exhaustive effort on the part of NGIS paved the way for the ICON launch.

Launch day for ICON began for the NGIS launch control team when the teams went “on console” 4 hours 15 minutes prior to the targeted “drop time”. 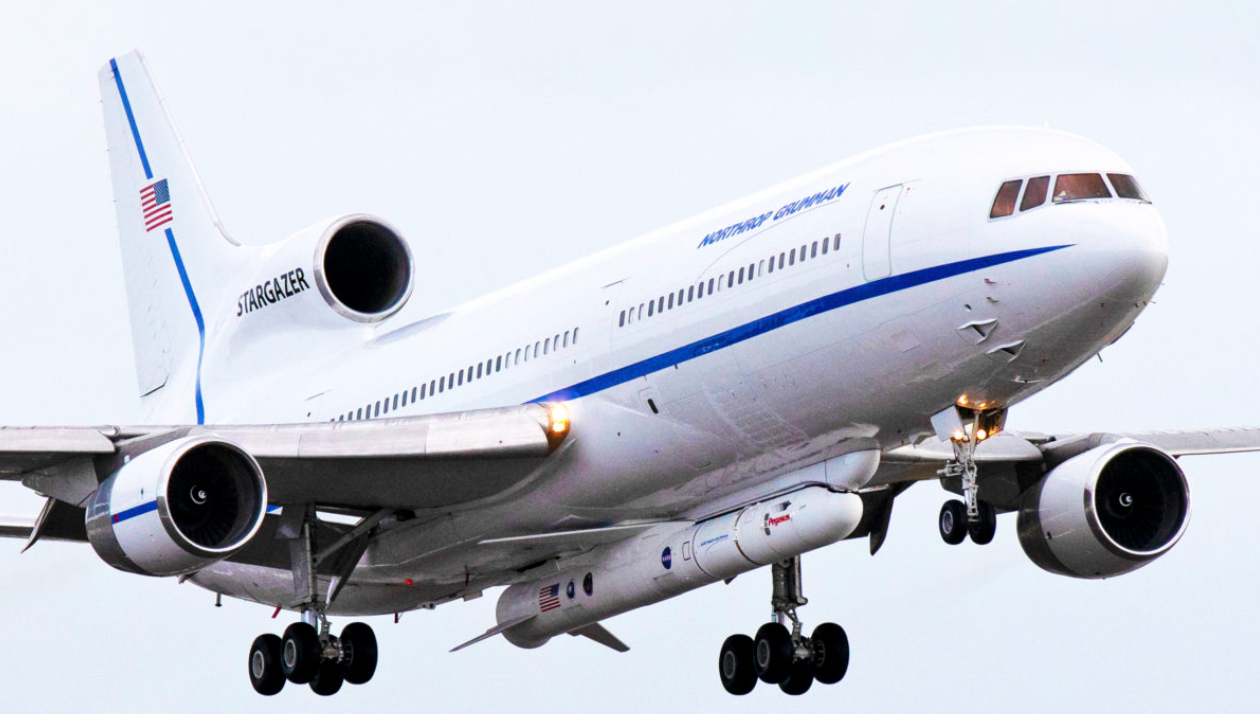 “So the first step [was] the Range facility setup,” said Mr. Baldwin to NASASpaceflight’s Chris Gebhardt in their one-on-one interview.  “And then once that [was completed], we [did] what’s called Pegasus Power Up. And we just [powered] up the vehicle and we [sat] there for some time, 45 minutes, letting the engineers review their systems, [making] sure things look as expected.

“We then [got] into a powered systems test, where [we transferred] power from external power supplies to our internal batteries, [made] sure those [were] functioning the way they [were] supposed to and operating nominally.”

After this, a Flight Termination System open-loop test with the Eastern Range was performed before the teams moved into pre-engine start checklist.

Stargazer then started pre-taxi operations 2 hours 15 minutes prior to Pegasus XL launch before taxiing along the runway at the Skid Strip at Cape Canaveral Air Force Station roughly 1 hour 15 minutes prior to drop, after which pre-takeoff checks were performed.

Those checks took about 10 minutes, after which Stargazer powered down the skid strip runway and took off for the drop zone 58 minutes prior to Pegasus XL launch.

While the first launch attempt was aborted due to a communication issue, a recycle around the racetrack saw the rocket drop occur 30 minutes after the aborted attempt.

Pegasus XL rocket’s first stage solid motor ignited 5 seconds after the rocket dropped from Stargazer, with the entire rocket system then delivering ICON to its 575 km (357 mi) orbit inclined 27° to the equator.

NASA’s Ionospheric Connection Explorer (ICON) satellite is designed to study changes to Earth’s Ionosphere – the ionized part of the upper atmosphere from 60 km to 1,000 km (37 miles to 620 miles) – and interaction between Earth’s weather systems and space weather created by the Sun.

During the course of its mission, ICON will return data to allow scientists to better understand these weather system interactions and how they drive turbulence in the upper atmosphere.

Better understanding this turbulence will allow for improved GPS (Global Positioning System) signals for everyday navigation, improved communications, and an improvement on the technology we rely on every day.

To this end, ICON is part of NASA’s Explorers Program – which traces its roots back to the United States’ very first satellite, Explorer 1, launched on 31 January 1958.

ICON was formally accepted by NASA on 12 April 2013 and will be operated by the University of California, Berkeley’s Space Sciences Laboratory.

The ICON mission is slated to last two years – during which it will use four instruments to analyze the ionosphere.

1️⃣ gigabit of data per day

Together, ICON's instruments produce and downlink 1 gigabit (or about 125 megabytes) of data every day. #NASAICON pic.twitter.com/e6E4S2dz0b

The Ion Velocity Meter (IVM), an ion drift meter, will measure the motion of charged particles in the ionosphere.  It was built but the University of Texas, Dallas, and will collect in situ data about ions in the local environment at ICON’s orbital altitude.

MIGHTI will gather its velocity data via doppler shifts in the red and green lines of atomic oxygen and is capable of detecting wind speeds as low as 16 kph (10 mph).

ICON is built around a LEOStar-2 buss from NGIS, formerly Orbital ATK, and will be powered by solar panels producing 780 watts – well more than the 209-265 watts consumed by the craft when in full science mode.