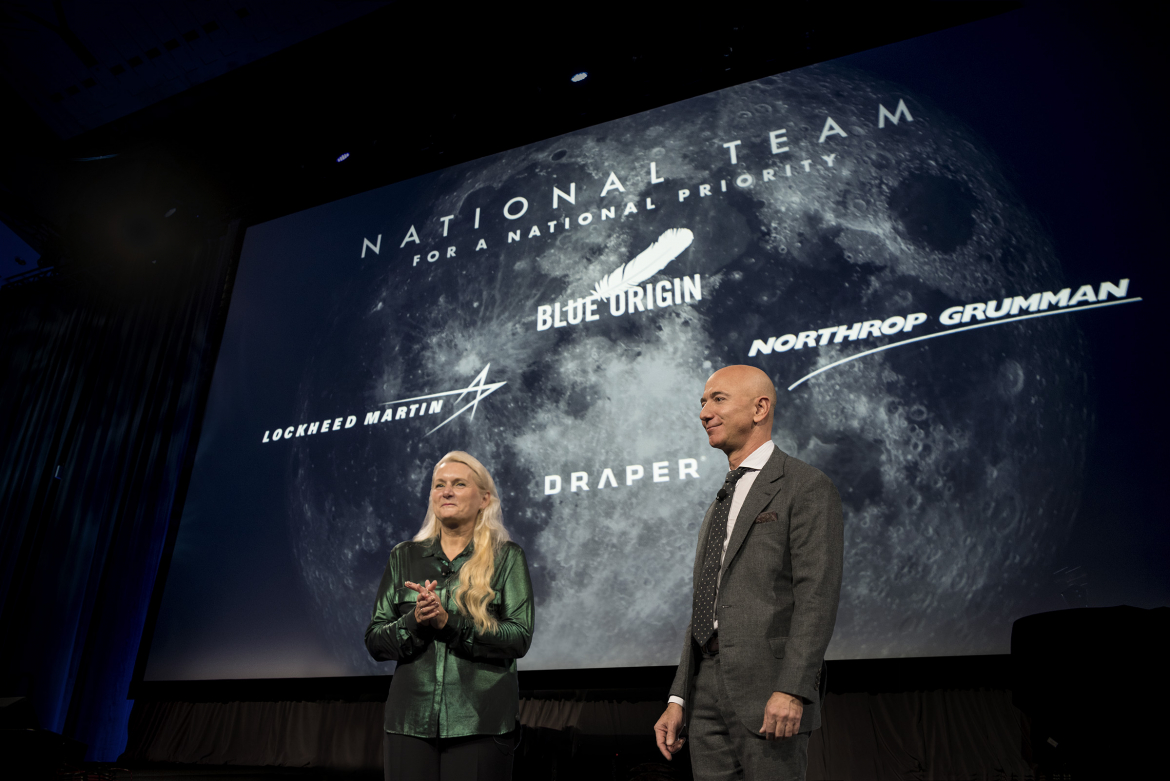 Private industry is partnering with NASA to develop technologies and vehicles for crewed missions to the Moon and Mars. The space agency has now released the final Request for Proposals for human-rated lunar landers. The latest solicitation is a culmination of development partnerships and calls for feedback from commercial offerors on draft solicitations.

Today, at the International Astronautical Congress in Washington, DC, Blue Origin announced its strategy for answering the call. Blue Origin will partner with Lockheed Martin, Northrop Grumman, and Draper to develop a complete Human Landing System (HLS) for the Artemis program.

Blue Origin will act as prime contractor and develop the descent element of the HLS based on its Blue Moon lander and BE-7 engine. “National challenges call for a national response,” said Bob Smith, CEO of Blue Origin. “Combining our partners’ heritage with our advance work on the Blue Moon lunar lander and its BE-7 engine, our team is looking forward to working with NASA in support of the Artemis program.” 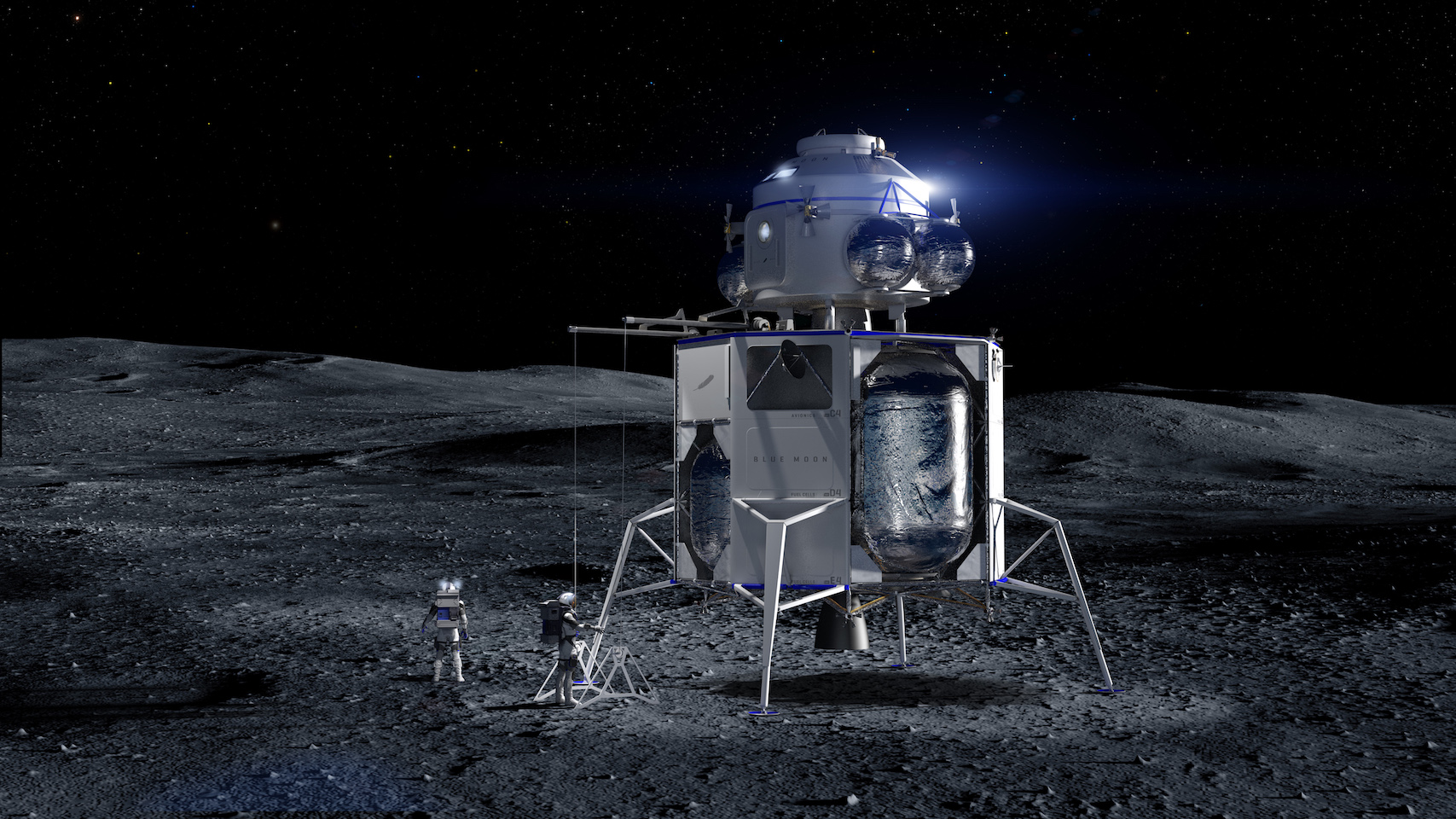 Lockheed Martin will develop a reusable Ascent Element to take crews from the lunar surface back to the lunar Gateway. “We value Blue Origin’s thoughtful approach to developing human-rated flight systems, and are thrilled to be part of a national team with this mix of innovation and experience,” said Rick Ambrose, executive vice president of Lockheed Martin Space.

Northrop Grumman will contribute the Transfer Element used for the lander’s initial descent from the Gateway to the surface. Draper will be responsible for the vehicle’s guidance and avionics.

Speaking of the announcement, Frank DeMauro, VP and GM, Space Systems Division of Northrop Grumman said, “We are one step closer to meeting NASA’s goal to get the first American woman and the next American man to the surface of the moon by 2024. This team brings the best technical and program talent together in the industry to deliver on NASA’s ambitious timeline.”

Developing Technologies for the Moon and Mars

Draper is also partnering with Blue Origin under NASA’s Flight Opportunities program, in order to test their navigation system aboard the suborbital New Shepard rocket. The system is designed to achieve pinpoint landings, while avoiding boulders, slopes, and uneven surfaces. The system has previously been tested on Masten Space Systems’ Xombie and Xodiac Vertical Takeoff Vertical Landing (VTVL) vehicles.

NASA also awarded Blue Origin a $10 Million partnership to mature a fuel production system. The partnership calls for a ground demonstration of hydrogen and oxygen liquefaction and storage. This development could inform propellant production plans for the lunar surface, in order to eventually develop a reusable descent element of the HLS, or enable more payload to return in the ascent element.

The vehicle is planned to have nozzles at the aft end of the spacecraft in order to transfer fuel from one Starship to another, in order to utilize the vehicle’s full payload capacity. NASA hopes this development will aid the sustained exploration of the Moon and Mars.

Proposals for HLS designs are due to NASA by November 1, after which multiple awards will be made to develop and demonstrate the lander. Following demonstration missions, the HLS will be used to land the Artemis 3 crew in 2024, with a second landing during the Artemis 4 mission in 2025.

Prior to releasing the final HLS request, NASA received over 1,150 comments from private industry on drafts of the solicitation. Companies expressed concerns over the number of reports NASA required, which could hinder development timelines, as well as the requirement for the HLS’s design evolution to be refuelable by 2028. As a result, NASA decreased the number of deliverables required from 116 to 37, and removed the refueling requirement.

NASA has also made its engineering workforce available for collaboration, and all proposals are required to include a collaboration plan.

When tasked with the 2024 landing date, NASA responded that they would meet the challenge “by any means necessary,” and this is stressed throughout the HLS solicitation documents. To that end, NASA wants to explore all options, and remains open to innovative approaches. However, there are still a fair number of requirements for how the HLS architecture must operate. 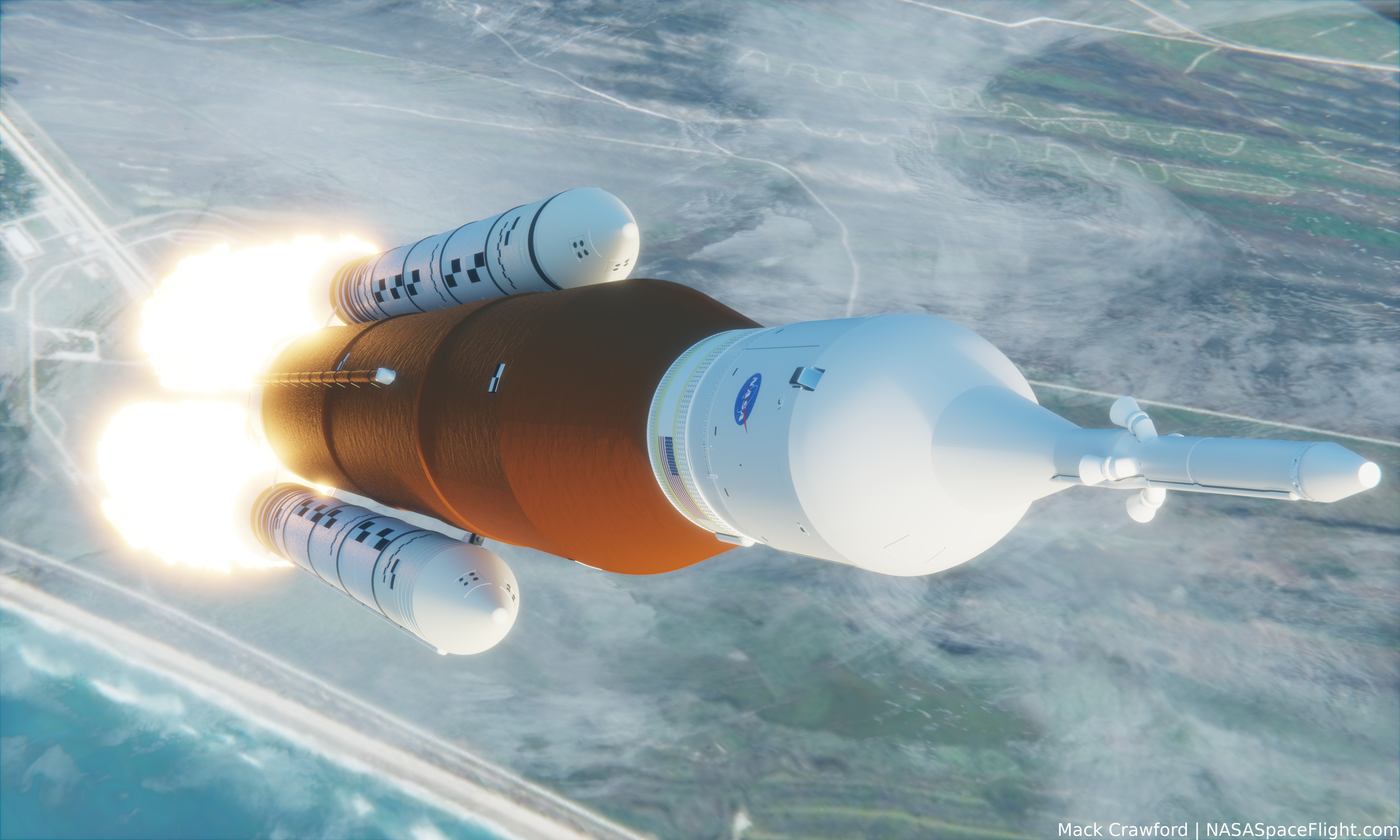 NASA’s preferred approach is for crew to launch in the Orion spacecraft aboard the Space Launch System (SLS). The HLS would launch separately, aboard a commercial launch vehicle, and dock to the Gateway. While the Gateway is not required to be utilized for the 2024 landing, the HLS design must be evolvable to utilize the Gateway by 2026.

HLS designs not docking to the Gateway would instead dock directly to the Orion spacecraft. The Gateway would still be available for other uses, such as communications relays, for the 2024 landing.

Another change from previous solicitation documents is the availability of SLS for HLS launch services. While previous drafts offered SLS as an option to launch HLS elements as Orion co-passengers, the latest draft specifies that the HLS offeror is responsible for delivery to lunar orbit using a commercial launch vehicle. This implies SLS’s only role in Artemis will be to launch Orion to the lunar Gateway.

The time from Orion’s launch aboard SLS, to a lunar landing, and then back to splashdown on Earth is expected to be within 25 to 34 days.

Alongside the reveal of NASA’s Exploration Extravehicular Mobility Unit (xEMU), the HLS solicitation details the procedures for preparing for lunar surface EVAs. The crew will wear the xEMU suits for descent and ascent to and from the lunar surface, with the suits connected via umbilicals to the HLS’s life support systems.

The crew will begin their EVA pre-breathe operations prior to departing the Gateway, with 36 hours of pre-breathe required before the first EVA. This begins with the Gateway and HLS reducing the combined cabin pressure to 10.2 psi, prior to the crew ingress into the HLS. Then, after the HLS hatch is closed, the HLS pressure is reduced further to 8.2 psi. The time between crew ingress and touchdown on the lunar surface is expected to be more than 24 hours.

The HLS is required to include either an isolated airlock, or support full cabin depressurization for the crew to exit the lander for surface EVAs. The EVAs will last at least 4 hours, and be supported using the HLS.

Like previous drafts of the HLS request, NASA envisions two phases of Artemis operations. An initial phase will achieve the first landings, followed by a sustainable phase that will reduce cost and support more advanced missions. 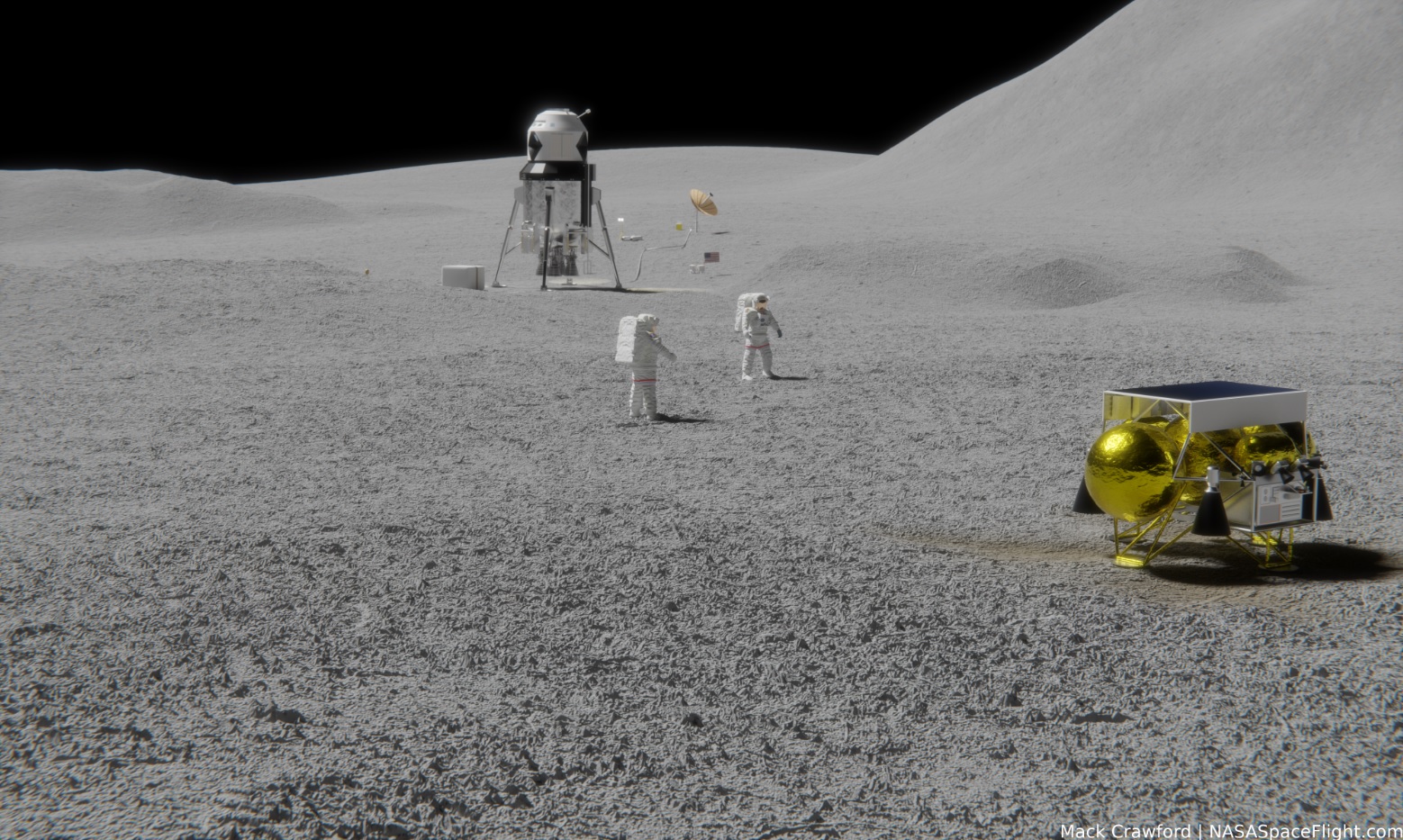 The HLS is required to provide a habitat for the crew for 8 Earth days, including 6.5 Earth days on the lunar surface. In this initial phase, the HLS will target landings between 84 and 90 degrees south latitude on the moon, the lunar south pole. The sustainable phase is planned to expand landing sites to include the entire lunar surface.

All of these performance requirements apply to a vehicle that must utilize automation. Unlike the Apollo lunar lander, which was hand-flown by the crew, the HLS must rendezvous and dock with the Gateway, as well as descend and ascend to and from the lunar surface, completely autonomously.

These capabilities will be developed and informed by recent and upcoming technology partnerships between NASA and commercial offerors.