One on one ESA Director General Johann-Dietrich Wörner 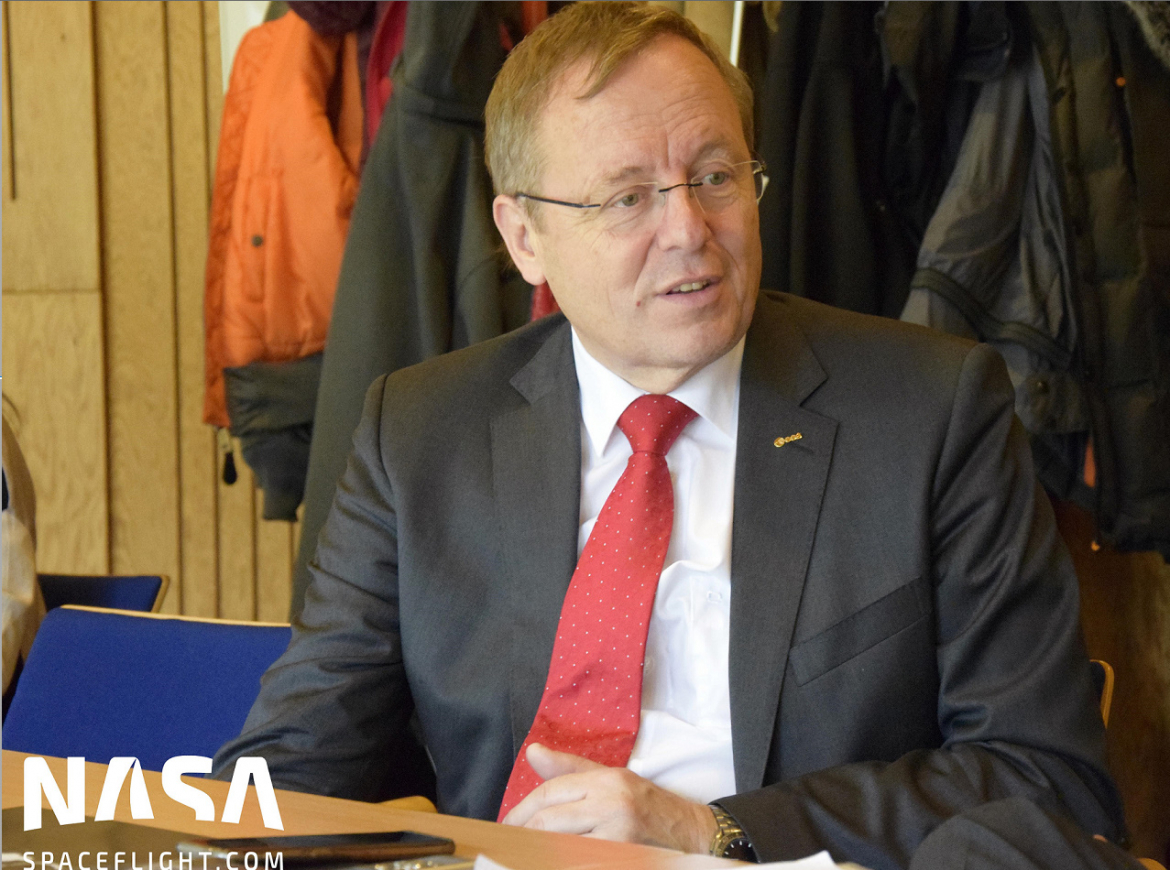 Last Sunday (October 6th) the annual ESA-ESTEC open house day was held on the grounds of Europe’s largest Space facility, ESTEC in the Netherlands. This open day is part of world space week – and the week of science. This year’s theme of the open day was “Europe to the Moon”. Among the special guests was ESA Director General Johann-Dietrich Wörner.

Mr. Wörner, who has led ESA since July 1, 2015, took time out of his busy schedule to talk to NasaSpaceFlight.com.

Question: What are the Space Station plans for and after 2024, pending the potential redirection of support from the Americans?

Johan Wörner:  No that is a bit simplified. The Americans say they will hand it over, more or less, to commercial companies – which does not mean they are not financing it.

If you look at the private activities right now with SpaceX and others, they are financed by public money, but it is a commercial activity. This is how I understand the Americans, concerning the Space Station, that they would like to hand over more activities to commercial partners, but they will still be financing it.

Johan Wörner: This will not be decided today and not at the upcoming ministerial (council meeting), but I believe if the Station is there, we will use it because it is a great opportunity to do microgravity research with astronauts and therefore I believe we will continue to stay in. It was the original plan to stop (using) the Station. The Americans said they will use it further on, the Russians say even (as far as) 2030. So, therefore, we would have to have a discussion with our European ministers (about) what we will do, but so far, I believe we will go on. 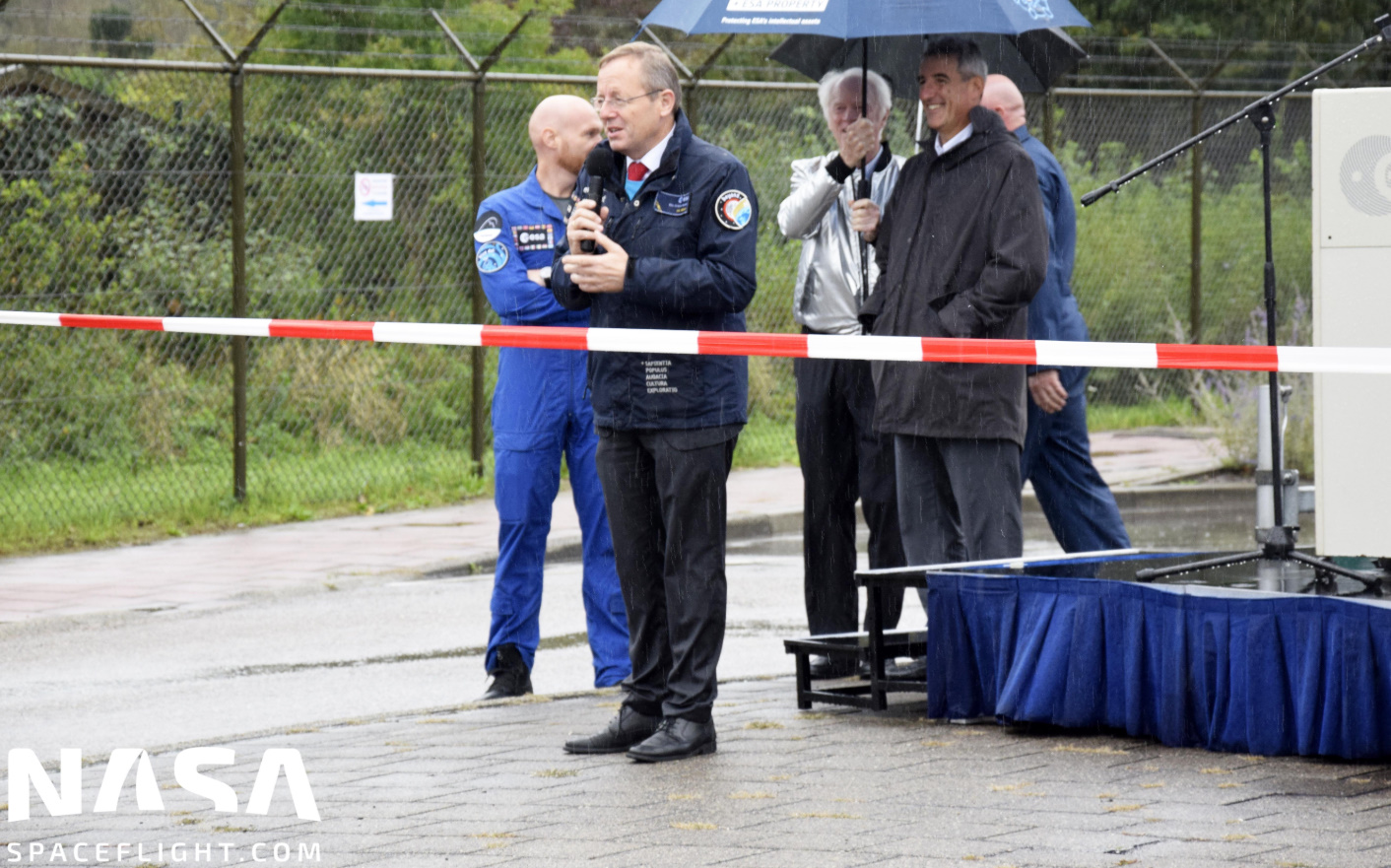 But it is interesting to know that the use of the Station is not a decision of ESA, it is an intergovernmental agreement and therefore the governments have to decide, and the governments who signed the IGA of the ISS. So, it’s not ESA as such, it is as national countries, the USA, Canada, Russia, Japan and several European member states – those are part of ESA. They ask us (ESA) to do the work for them, per the yearly use of the Station.

Q: Corporation with China, is it a possibility that ESA astronauts will go to the Chinese space station in the future?

Johan Wörner: I was always fighting (for the argument) that there should not be several stations. Yes, in the movie Gravity it was helpful, (but) I was always saying let’s have one station globally together. This was not acceptable for some of the partners, so there was a Chinese space station. We’ve had some discussions with our Chinese colleagues, some training of European astronauts together with the Chinese, but there is no decision so far.

Q: This decision won’t be in the upcoming ministerial meeting?

Johan Wörner: No. Well maybe discussed, but not a concrete proposal. Personally, I believe it is good that space is breaching Earthly crises, and therefore we should cooperate on a global scale with each and every country we can. Not to cooperate is not the right way. So, therefore, ESA tries to cooperate with as many states worldwide as possible.

Q: ESA astronaut flight status, I believe Thomas Pesquet is next up, and also Matthias Maurer is close to an assignment?

Johan Wörner: There is a principal and general decision – and that was that all astronauts of the 2009 class should fly, if possible, twice.

So, we have Alexander Gerst (twice). Luca Parmitano (twice), so we are looking for the others to also fly for a second time. And also, we had a further astronaut selection out of the 2009 class that was Matthias Maurer. The next planned flight after Luca is Thomas. And then at this point, we don’t know right now, we will propose Matthias Maurer. But this means proposed, it is not a decision of ESA but also NASA.

I think he (Maurer) should also have a chance to fly because he was selected and it is logical he has some priority because he hasn’t flown so far. But again, we are also discussing the second flight of the other astronauts, this is on the agenda.

Q: Will there be an ESA astronaut on the first Orion flight because of the service module?

Johan Wörner: We will try to have it, but I think it will be an all-American crew. But anyhow, it will be a good (future) opportunity for us. This Orion system, with the ESM (European Service Module) – to also have European astronauts to fly on SLS and also to the Moon. 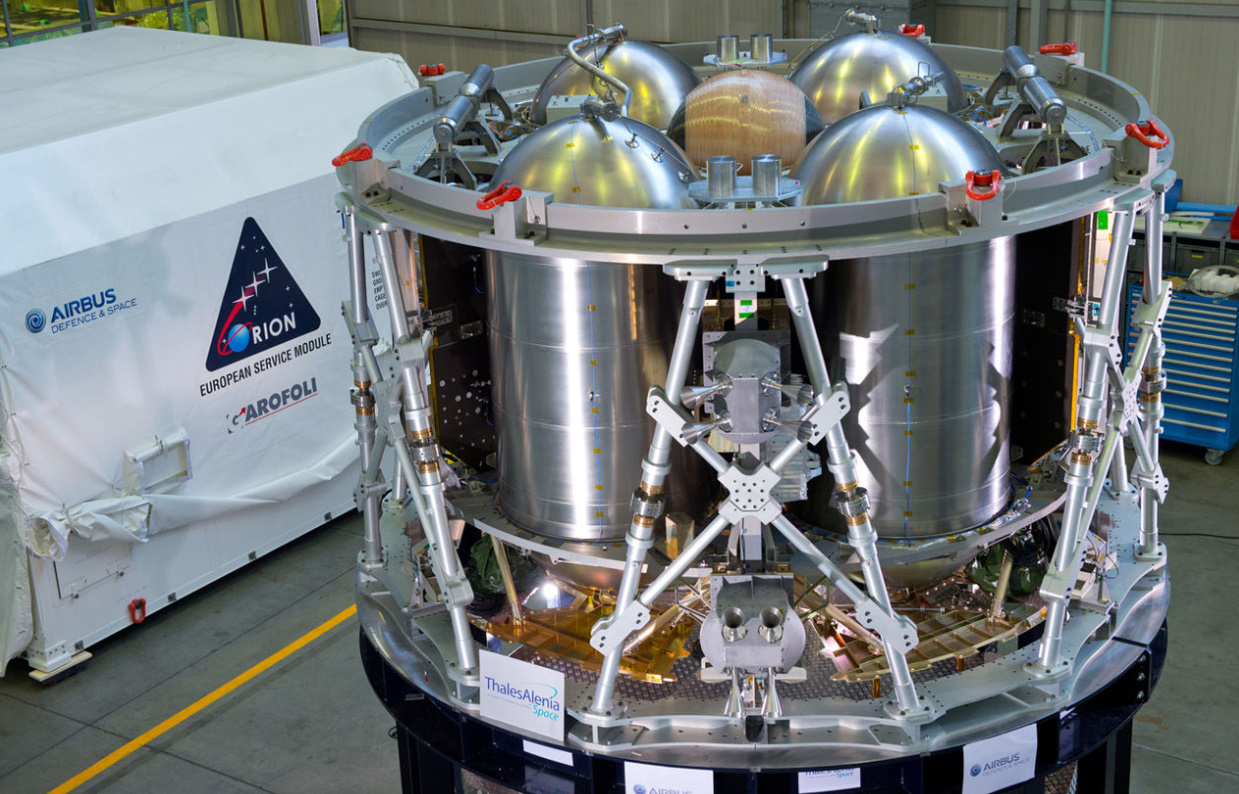 Q: Status for the third Orion ESM and further production?

Johan Wörner: We are now discussing with Airbus about the third. And the Americans have now decided to fly 6 to 12 Orion missions. So, we are discussing how we can do this in Europe. This is, for sure, a very interesting aspect, but we will have to see.

Q: ESA moon plans – the Lunar gateway, what can you tell about that?

Johan Wörner: What is important is we’ve had several discussions with people that were saying, ‘ha, the Americans would like us to provide ESM but not something for the gateway‘. But they have to make it very clear that this is not right.

It is very clear for the Americans they need us for SLS, they need the ESM because we are on the critical path, without ESM the SLS can not fly. So that is very clear. And at the same time, they are also very much in favour that we are part of the gateway, especially for ESPRIT. 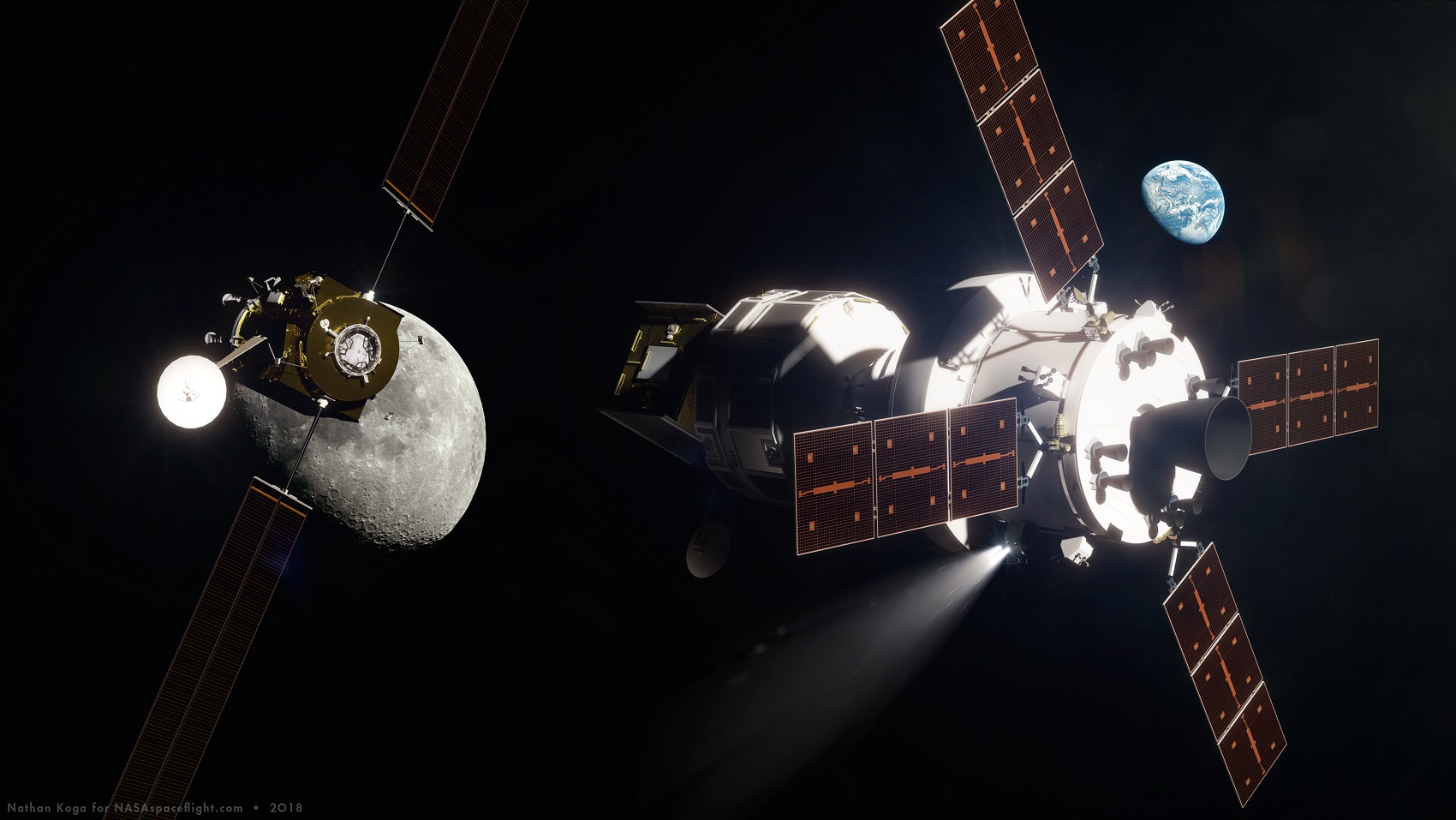 Orion and crew with the ESPRIT and Utilization modules attached approach the PPE in lunar orbit on EM-3. As with the ISS, the space station will be the passive vehicle for rendezvous and docking and the visiting vehicle (Orion) will be active. Credit: Nathan Koga for NSF/L2.

We are now discussing and selecting possible partners in Europe. And we are also looking to work together with Japan. So yes it is in the process of going forward. This will be a good opportunity and it will be a part of the upcoming proposal to the ministerial (council).

Q: Can you talk a little bit about Space Rider?

Johan Wörner: Space Rider is a small shuttle to be launched by Vega-C. Space Rider has a big opportunity to deliver several things. First of all, microgravity research, but it can also be used for observation – and it could also be used for debris removal in the future. So, therefore, I would personally like to get this financed. This is also part of the proposal, up to the first maiden flight it is part of the proposal for the ministerial (council). 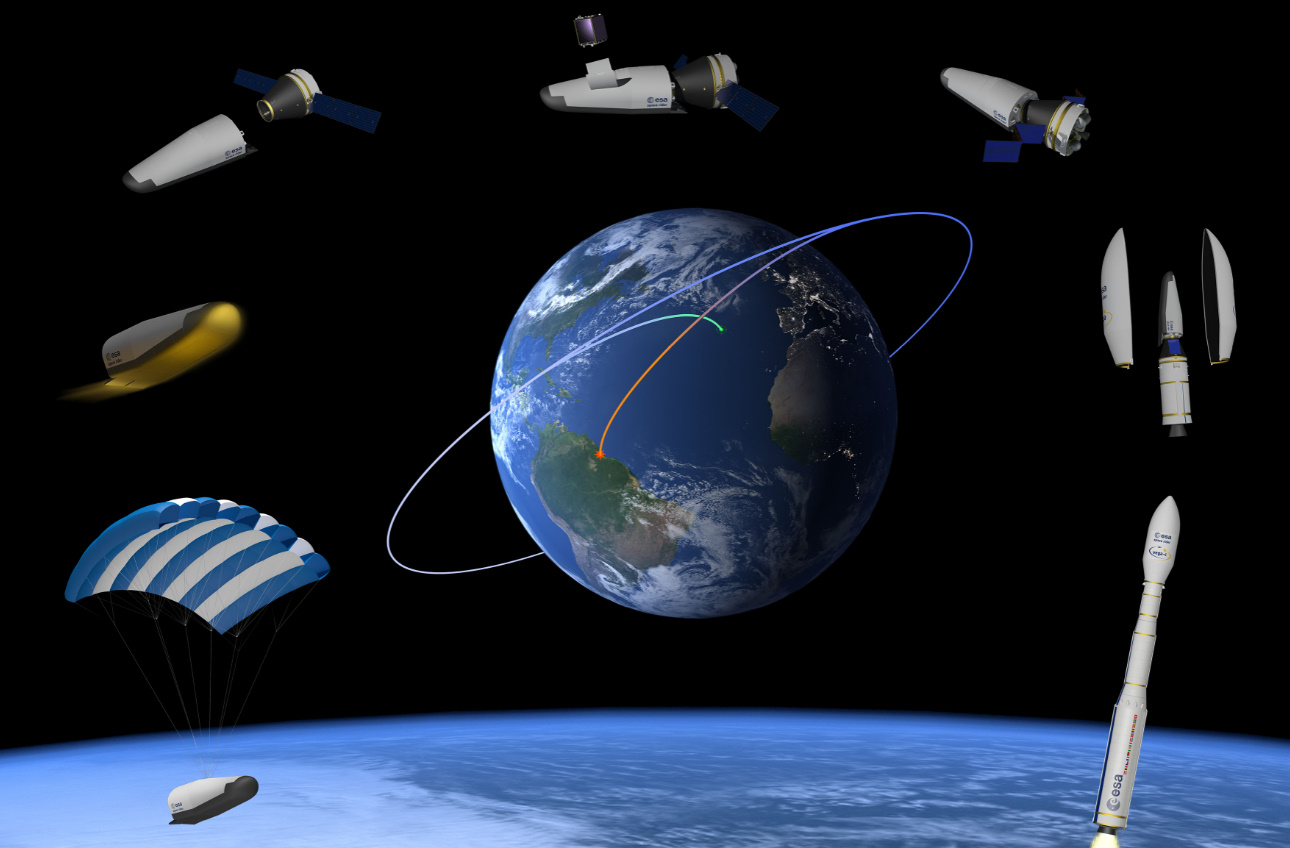 Q: So, ESA is not yet committed to Space Rider?

Johan Wörner: No, No, we have been working for years developing everything, but we need some more money. And therefore, the member states have the final say as always. The member states are our stakeholders.

Q: What is the Progress of Ariane 6 and Vega-C, what was the impact of the recent Vega failure?

Johan Wörner: The recent mishap of Vega, of course, had to be investigated. We had a very intensive investigation and we now believe we found the root cause, but we are still working on it to avoid it (happening again. We are looking at an early 2020 return to flight with Vega.

So far, the Vega-C is not affected by it, maybe a small delay but nothing significant. And Ariane 6 should have its maiden flight at the end of 2020. That is the plan right now.

Final Question: How do you see ESA’s future?

Johan Wörner: ESA’s future depends 100 percent on its member states. And I, as the ESA director general, have to convince member states that the idea of ESA is also something very fruitful for the future. So, therefore, I see a bright future for ESA as an intergovernmental agency in Europe bringing together different member states with different ideas, with different industries and working for a united Europe in space.