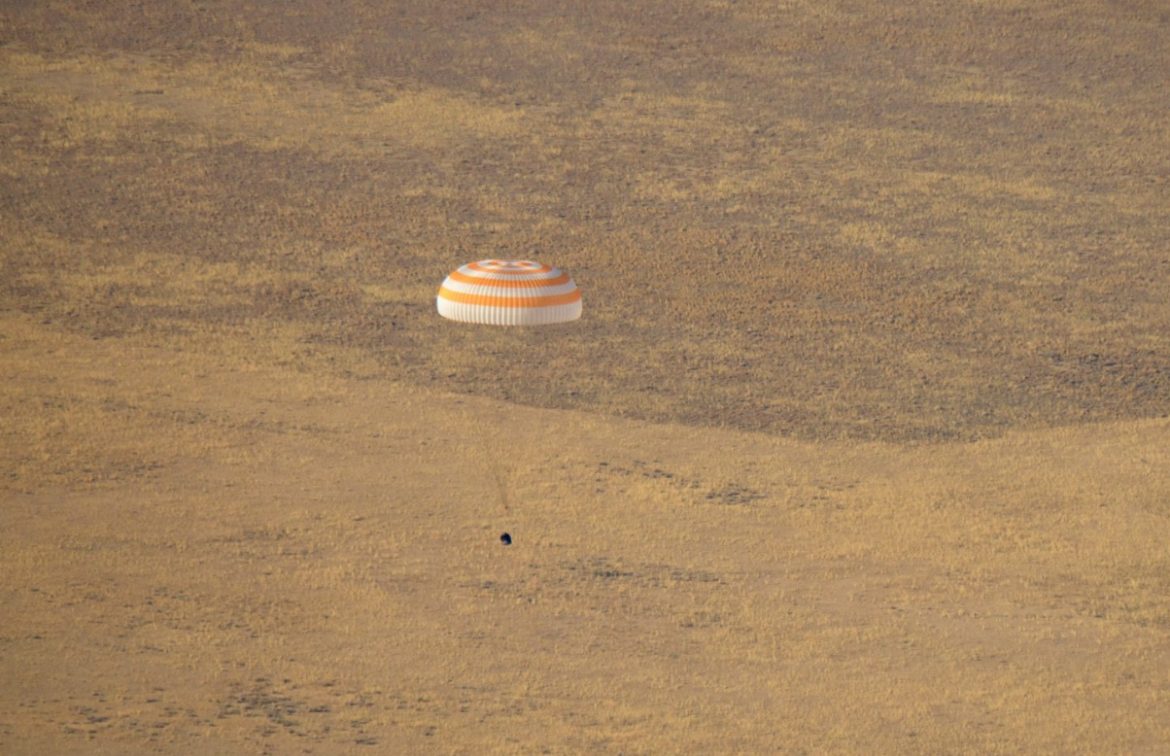 Following a brief period as a nine-member crew onboard the International Space Station (ISS), three of its orbital outpost explorers returned home in the early hours of Thursday. Riding onboard Soyuz MS-12 was Alexey Ovchinin and Nick Hague, joined by short-stay spaceflight participant Hazzaa Ali Almansoori.

Hague completed his second flight in space totaling 203 days, while Ovchinin logged 375 days in space on his third flight at the time of landing.

Alexey and I got back in our Sokol suits today to perform leak checks and prepare for our return to Earth…last Friday on @Space_Station! #FridayFeeling pic.twitter.com/K3Q4br0cB4

However, this was the first actual trip to the ISS for Hague, after he and Ovchinin first flew together on an abbreviated mission in October 2018, cut short by one of the four boosters failing to separate properly and striking the vehicle triggering an ascent abort minutes after launch. Both landed safely during the abort and were quickly reassigned to the mission they are now completing.

The first order of business was the space station change of command ceremony, during which Ovchinin handed over command to ESA (European Space Agency) astronaut Luca Parmitano.

Following a farewell and Soyuz hatch closure, the crew then strapped themselves into their seats and conducted leak checks before the undocking procedures.

They are being transported home under the command of Ovchinin, who is commanding Soyuz MS-15 for its End Of Mission events.

Undocking occurred at 3:36 am Eastern time.

All the departure events were nominal as the two crews bid farewell to each other over the communication loops.

The deorbit burn occurred at 6:06 am Eastern, reducing the Soyuz’s velocity just enough for it to begin the plunge back to Earth via a 4 min, 40 second retrograde firing.

The Soyuz then entered the critical part of its mission as the spacecraft has no other option but to re-enter.

The first milestone was module separation as the three major elements of the Soyuz spacecraft – the OM, DM and Instrumentation/Propulsion Module (IPM) – are pushed apart via the use of pyrotechnics. 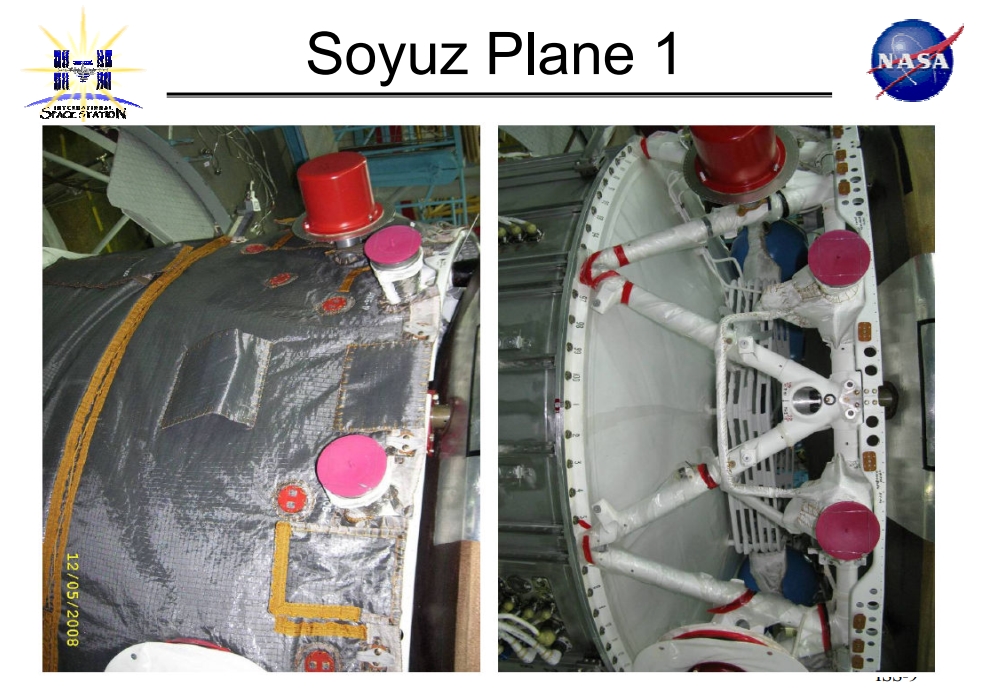 One of the separation planes on the Soyuz spacecraft, via Shuttle era FRR documentation – L2

Two “off-nominal” re-entries occurred in 2007 and 2008 and were the cause of separation failures on the modules, thus initiating a very stressful return for their three-person crews.

Known as “ballistic entry” – the crew has to endure much higher G-forces and land at an alternative site. 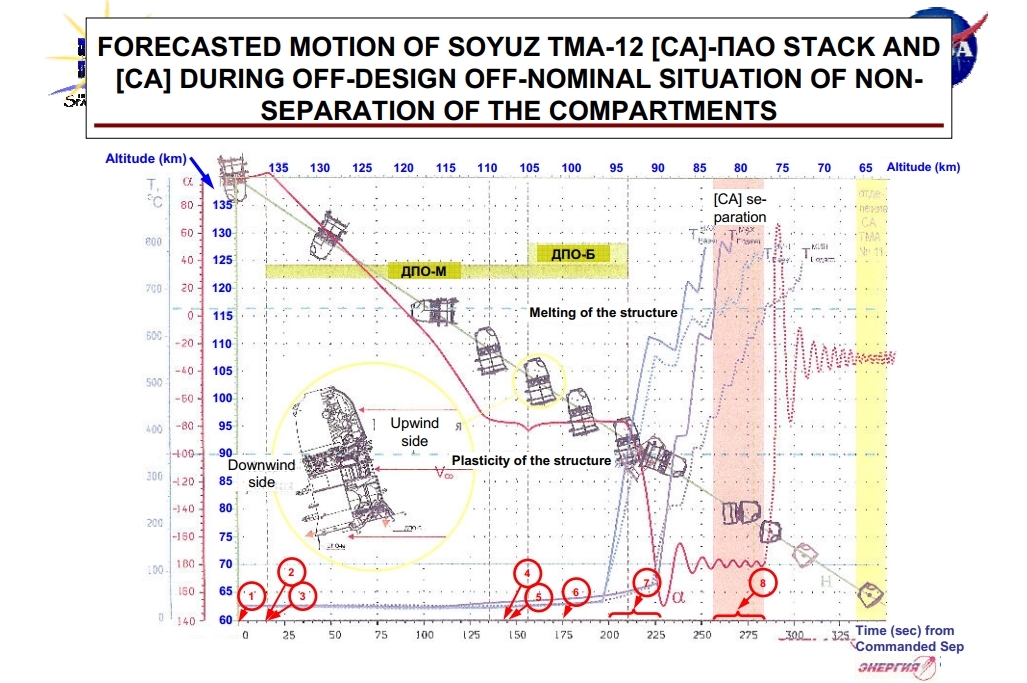 An overview of the investigation into the ballistic return via STS-119 Shuttle Flight Readiness Review (FRR) documentation, L2

Clipped from the ESA video:https://t.co/nh5uXkJCVY

Returning in a Soyuz. It's rather dynamic! pic.twitter.com/Ih6qzouMTX

The Soyuz craft then completes the return to terra firma, landing on the steppes of Kazakhstan, which is scheduled for 7 am Eastern. 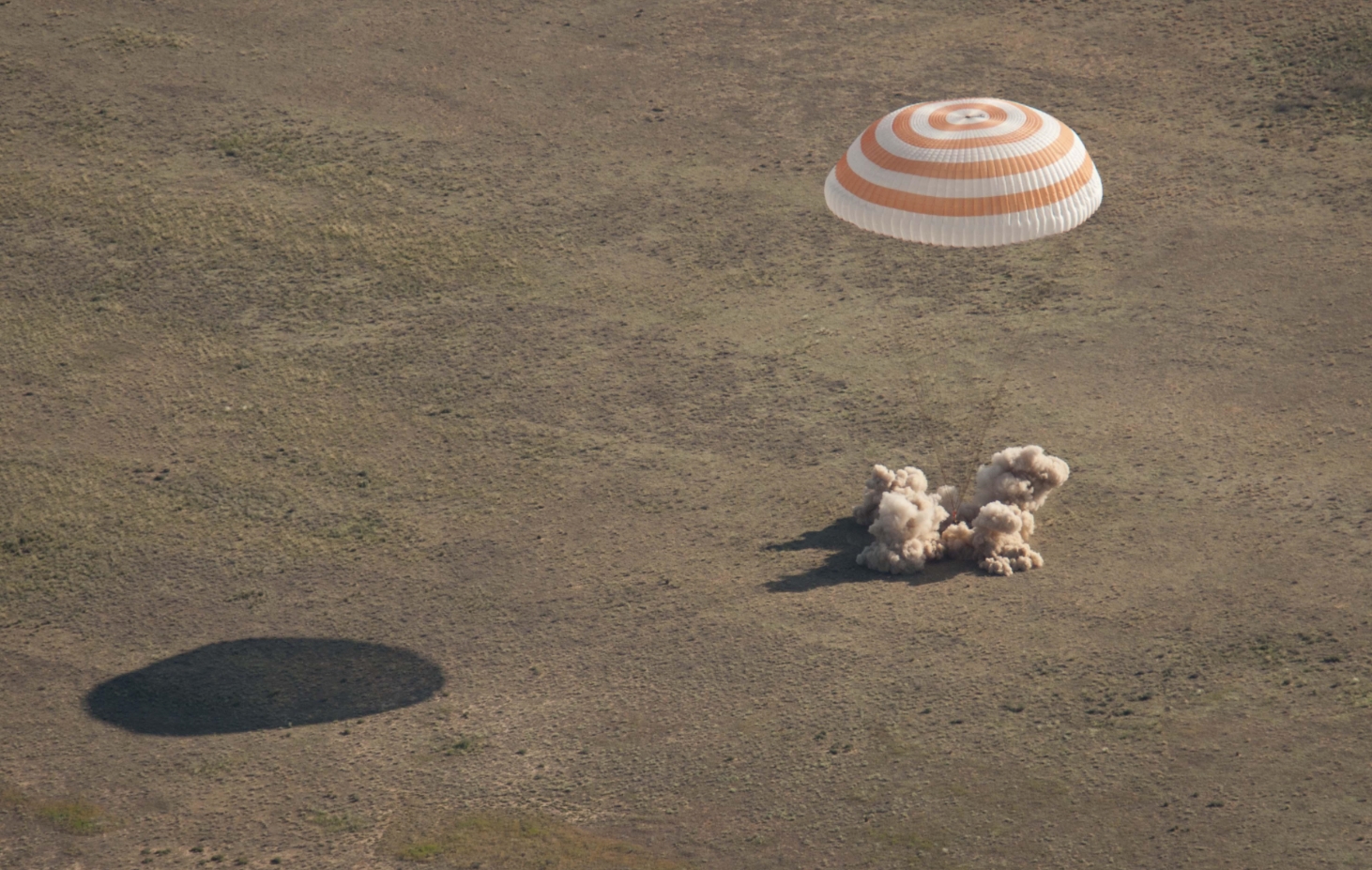 A Soyuz landing – picture from ESA

The exact timing of touchdown, under a “soft” thruster engine firing, is always dependent on several factors – such as the impact of winds on the Soyuz chutes – and can vary by several minutes.

With the Soyuz safely back on Earth, ground and aircrews converge on the Soyuz to extract the crew from the SA.

The crew will undergo immediate and preliminary health checks once outside their Soyuz spacecraft. All three will then transferred to a medical tent and then prepared for transit away from the landing site.

After landing, the crew will return by helicopter to the recovery staging area in Karaganda, Kazakhstan. Hague will board a NASA plane for the return to Houston, and Ovchinin and Almansoori will return to their training base in Star City, Russia.