Starship Mk1 arrives at launch site ahead of flight test 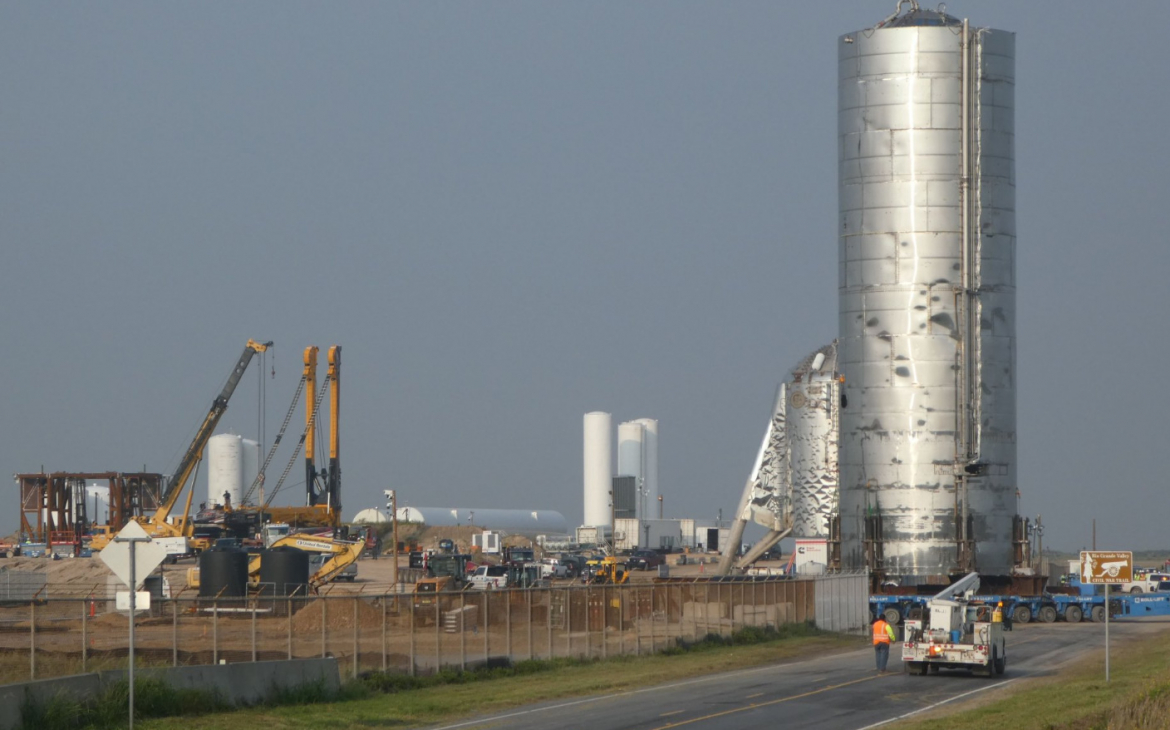 SpaceX’s Mk1 Starship enjoyed a short road trip to its Boca Chica launch site on Wednesday, a key milestone ahead of its upcoming test flight. Soon to be joined by its fairing, Starship will undergo several weeks of preparations for the test flight to 20 KM that will include an ambitious landing attempt.

The Boca Chica facility has grown in notoriety since SpaceX started to construct what was initially thought to be a water tower. This became a running joke, with Elon Musk celebrating the milestones of the Starhopper test vehicle by tweeting “Water Towers Can Fly”.

Starhopper successfully conducted numerous achievements, not least the 150 meter hop and landing back in August.

That was its only launch as SpaceX opted to “retire” the test vehicle into the role of becoming a vertical test stand for Raptor engines.

Eventually, SpaceX will have four Raptor test stands, with the two horizontal stands already in operation at the company’s McGregor test site soon to be joined by the conversion of the Tripod Stand into a vertical test facility along with Starhopper’s new role in Boca Chica.

Starhopper is still at the launch site in Boca Chica, albeit moved to the side of the perimeter to make way for modifications to take place in the area – such as the installation of additional commodity tanks for the thirstier Starship.

A launch mount has also been constructed for the Mk1 vehicle.

This work took place while Starship was undergoing an interesting series of modifications surrounding its star role at Elon Musk’s update presentation.

For the September event, Mk1 performed the role of a mock-up, with the stacking of the fairing, fins, canards and the installation of three Raptor engines – although these were not the three engines that will fly with the vehicle during the test flight.

Following the event, Starship underwent partial disassembly processing, with the engines, fins, canards and nose cap removed before the fairing half was destacked. That, in turn, led to engineers spending most of October hard at work installing additional hardware that will play a part in Mk1’s actual test flight.

The most notable addition has been the installation of the six landing leg mounts that will have a key role during Starship’s first landing attempt. Unlike SpaceX’s Falcon rockets, the legs will deploy vertically from the mounts.

This week saw the arrival of the Roll-Lift vehicle, pre-empting Mk1’s move down the road to the launch site. With the aid of the “Big Yellow” crane, the aft section was lifted on to the Roll-Lift for its road trip, which began early on Wednesday.

With “Big Yellow” already transferred to the launch site, the aft section was lifted off the Roll-Lift, carefully “driven” down the road and installed on to the launch mount.

The Roll-Lift has since departed the launch site and will next deliver the fairing section, allowing for a near-repeat of the processing tasks seen during the mock-up stacking ahead of Elon Musk’s presentation.

The timing of the pre-launch processing flow milestones is unknown. However, numerous roadblock notices – which are usually published ahead of “pad clear-level” events – have been filed for November.

While Mk1’s test launch won’t take place next month, with numerous tasks to complete – not least the mating and installation of the three Raptor engines – the next major milestone will be the tanking of Starship for pressurization testing, which will be the first time this vehicle will be filled with liquid oxygen and liquid methane.

It is expected Starship’s launch site flow will pick up at pace during November, with the arrival and installation of its three Raptors, followed by an igniter hot fire and spin prime tests, mirroring the testing that occurred with Starhopper. If all goes well, a static fire will then follow shortly thereafter.

Mk1’s testing will also feed into the processing towards the launch of its sister ship in Florida.

Mk2 is also in an advanced state of production ahead of also undergoing a journey – albeit a much longer journey – from its Cocoa construction site to the Kennedy Space Center. 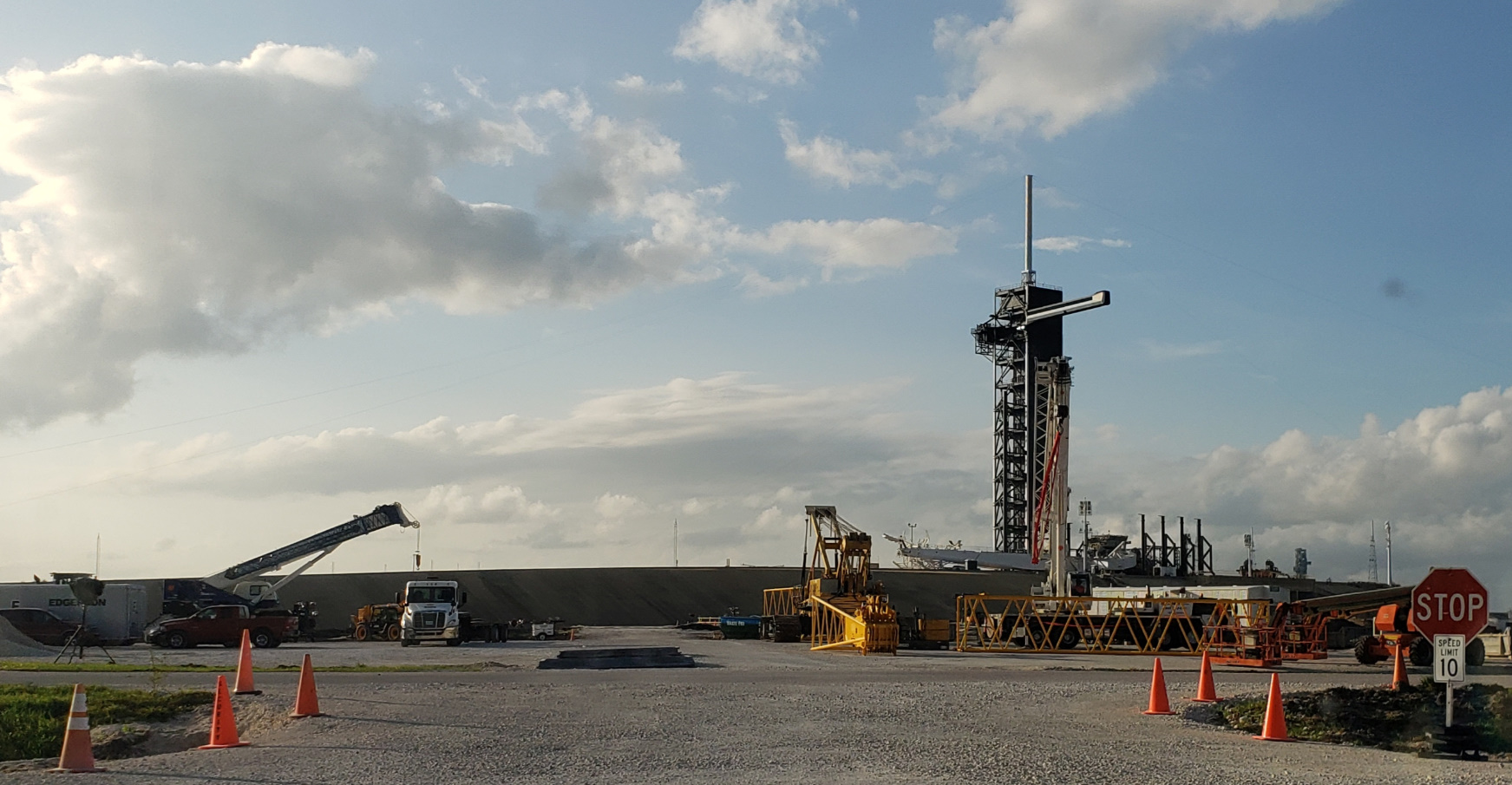 The launch of Mk2 will take place from a new launch and landing facility being built within the perimeter of Pad 39A. While a landing pad has already been constructed, engineers need to install Starship’s launch mount and commodity tanks.

As such, most of the attention remains in Texas as Mk1 prepares for the hugely anticipated test flight to 20 KM and, probably more so, the first landing of a Starship prototype that sees it return like a skydiver before swinging its aft towards the pad for a landing.