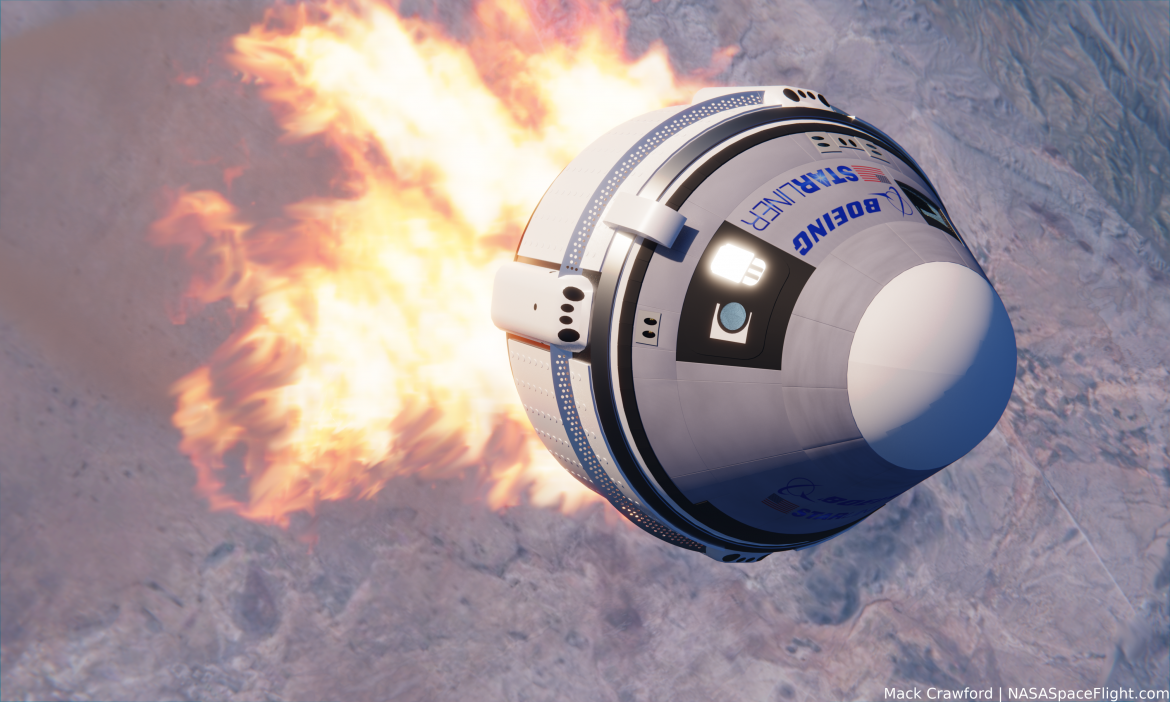 At the White Sands Missile Range proving grounds in New Mexico, Boeing has conducted a critical test of their Starliner vehicle on a Pad Abort Test.

The test occurred 15 minutes into the window 09:15 EST (14:15 UTC), with Boeing testing the Launch Abort Engines and Orbital Maneuvering and Attitude Control thrusters aboard Starliner that would be used to pull the vehicle and crew away from a failing Atlas V rocket either on the launch pad or during flight.

The test appears to have, overall, been a success in that all eight objectives were visually met.

However, a potential significant issue was the failure of one of Starliner’s three main parachutes.

Video of the test appeared to show all three chutes deploy, but only two remained attached to Starliner – a significant issue that will have to be investigated and evaluated.

Parachute issues have plagued the Commercial Crew Program, and Boeing’s chute issues do not appear to be behind them.

Two out of three chutes deployed. Redundancy allowed the capsule to land OK. SM fire was expected (when it hit the ground. Would be in water during a real PAT). pic.twitter.com/hnbUd3Yzke

While the abort engines and systems themselves are not needed for the upcoming Orbital Flight Test (a detailed explanation of why is below in the article), the parachute issue observed today will feed into NASA’s readiness for OFT and could result in a new delay for that mission – which is currently tracking to No Earlier Than 17 December 2019.

NASA Statement (partial, parachute-related): Boeing’s CST-100 Starliner spacecraft completed a critical safety milestone on Monday in an end-to-end test of its abort system.  Although designed with three parachutes, two opening successfully is acceptable for the test perimeters and crew safety. After one minute, the heat shield was released and airbags inflated, and the Starliner eased to the ground beneath its parachutes.

Boeing statement (full): Today’s pad abort test was a milestone achievement for our CST-100 Starliner team, for NASA, and for American human spaceflight. We will review the data to determine how all of the systems performed, including the parachute deployment sequence. We did have a deployment anomaly, not a parachute failure. It’s too early to determine why all three main parachutes did not deploy, however, having two of three deploy successfully is acceptable for the test parameters and crew safety. At this time we don’t expect any impact to our scheduled Dec. 17 Orbital Flight Test. Going forward we will do everything needed to ensure safe orbital flights with crew.

The system of 48 Orbital Maneuvering and Attitude Control (OMACS) thrusters and four Launch Abort Engines (LAEs) was successfully test-fired earlier this year following a redesign mandated after a failure of the abort system last year.

“The Pad Abort Test is one of Starliner’s last major milestones ahead of crew flight, and it is also the program’s first test flight,” noted Boeing.

“The mission is a crucial part of collecting data for crew flight certification, and the main goal of this test flight is to demonstrate the end-to-end functionality of Starliner’s integrated launch abort system.”

Each of the four LAE engines produce 40,000 lbf thrust and will be the main propulsive element for any needed Starliner aboard on the launch pad or during low altitude flight atop the Atlas V.

For today’s test, the Starliner Crew Module and Service Module were in their launch configuration as they will be when they are mated atop the Atlas V N22 rocket on SLC-41 at the Cape Canaveral Air Force Station.

This configuration was complete with the new aeroskirt that extends downward from the Service Module to provide aerodynamic protection and streamlining for the Atlas V rocket due to the fact that it will not fly with a payload fairing with Starliner.

For this Pad Abort Test, Boeing activated the abort system LAEs that fired and separated the Service Module and Crew Module from the test stand, propelling them upward rapidly and quickly.

The four main LAE’s fired for just 5.1 seconds, yanking Starliner away from a simulated failing Atlas V and upward on its arcing trajectory away from the abort test stand.

The 48 OMAC thrusters then fired five seconds after the abort began to perform a roll maneuver that lasted less than 4 seconds.

This roll maneuver put Starliner and its simulated crew into the correct orientation to fly safely away from the simulated failing rocket. 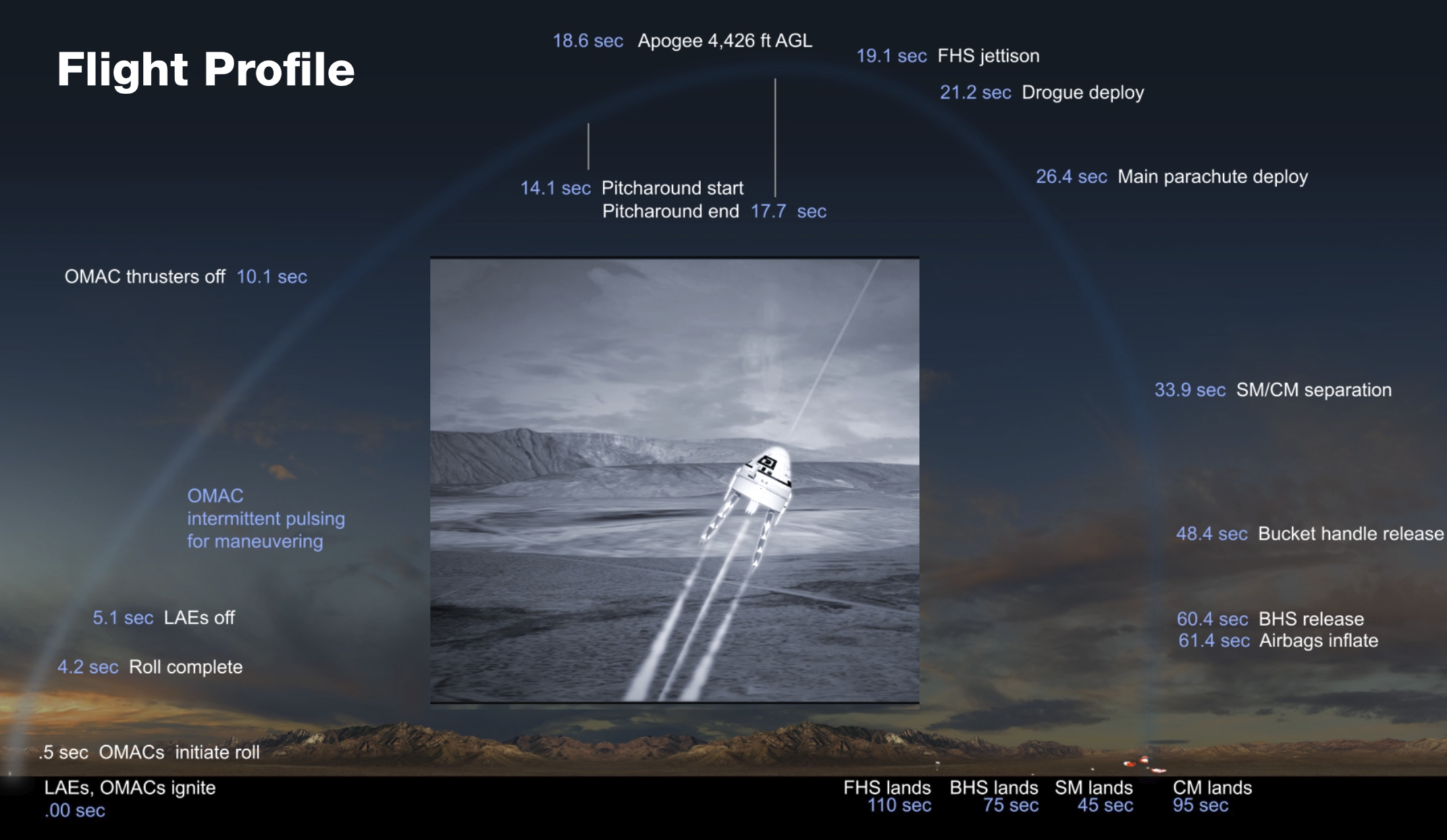 All engines shut down 10.1 seconds after the abort is triggered, after which Starliner coasted for four seconds before performing a pitcharound maneuver beginning 14 seconds into flight.

The pitcharound maneuver completed at 17.7 seconds right after Starliner reached its apogee (highest altitude in the abort) of 1.3 km (4,426 ft) 16.6 seconds after the abort is initiated.

After that, and in quick succession, the forward heat shield jettisoned and the drogue parachute deployed at 21 seconds.

Main parachute deployment followed at 26 seconds – at which time the parachute anomaly was observed.  This was followed at 34 seconds by Service Module separation from the Crew Module.

The base heat shield then fell away one minute after the abort was triggered, with the landing airbags inflating one second later. 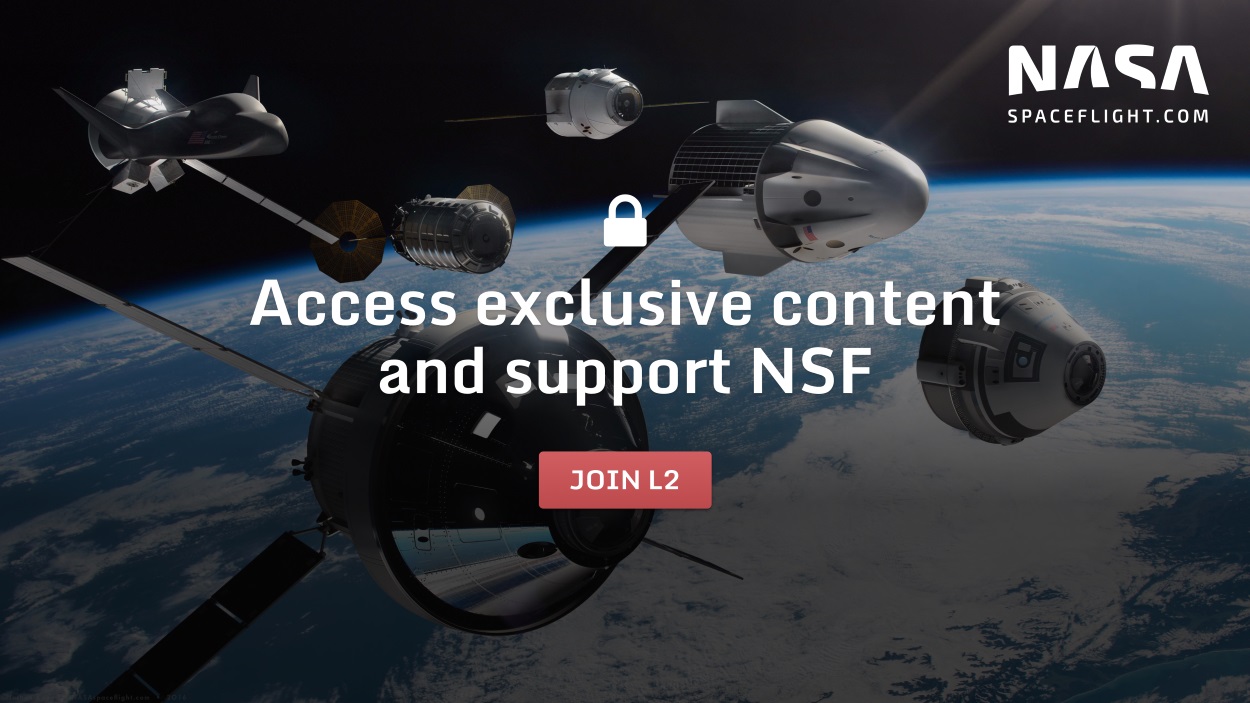 Overall, there were eight tests objectives for the Pad Abort Test, including:

This test is a critical step for the Commercial Crew Program and Starliner towards its ultimate certification to carry people on its Crew Test Flight (CFT) – currently tracking to readiness in early 2020 – as well as to “routinely” ferry astronauts to the International Space Station starting next year.

As stated by NASA’s Commercial Crew Program manager, Kathy Lueders, at last week’s Human Exploration and Operations (HEO) committee meeting of the NASA Advisory Council (NAC), today’s Pad Abort Test is not a mandatory test ahead of the uncrewed Orbital Flight Test (OFT) of Starliner currently slated for no earlier than 17 December 2019.

The reason for this is twofold.

The new Emergency Detection System on the Atlas V is specifically designed for Starliner to provide enhanced monitoring of the rocket’s systems and any issues that might develop in-flight.

If an issue were to occur, the Emergency Detection System would send a signal to Starliner that a problem had arisen, and Starliner would activate its launch aboard system to pull its crew away from the rocket to safety.

Because the system is being tested with Starliner in-flight for the first time on OFT, the abort systems on Starliner will be disabled and only capable of monitoring the signals and telemetry coming from the Emergency Detection System.

This is being done because should there be a communication problem or an erroneous detection of an issue by the Emergency Detection System on OFT, Boeing, NASA, and ULA do not wish to have that result in an early termination of the flight of Starliner with an in-flight abort.

The flip side of that is that should an actual issue occur with the Atlas V during OFT’s launch, it could result in the loss of the rocket and the Starliner capsule if the issue is serious enough.

In that manner, OFT will partly serve to validate the Emergency Detection System and its communication pathways and logic with Starliner’s abort systems.

Thus, an active abort system is not required for OFT, but is certainly required for the Crew Flight Test and subsequent crew ferry flights to the International Space Station. 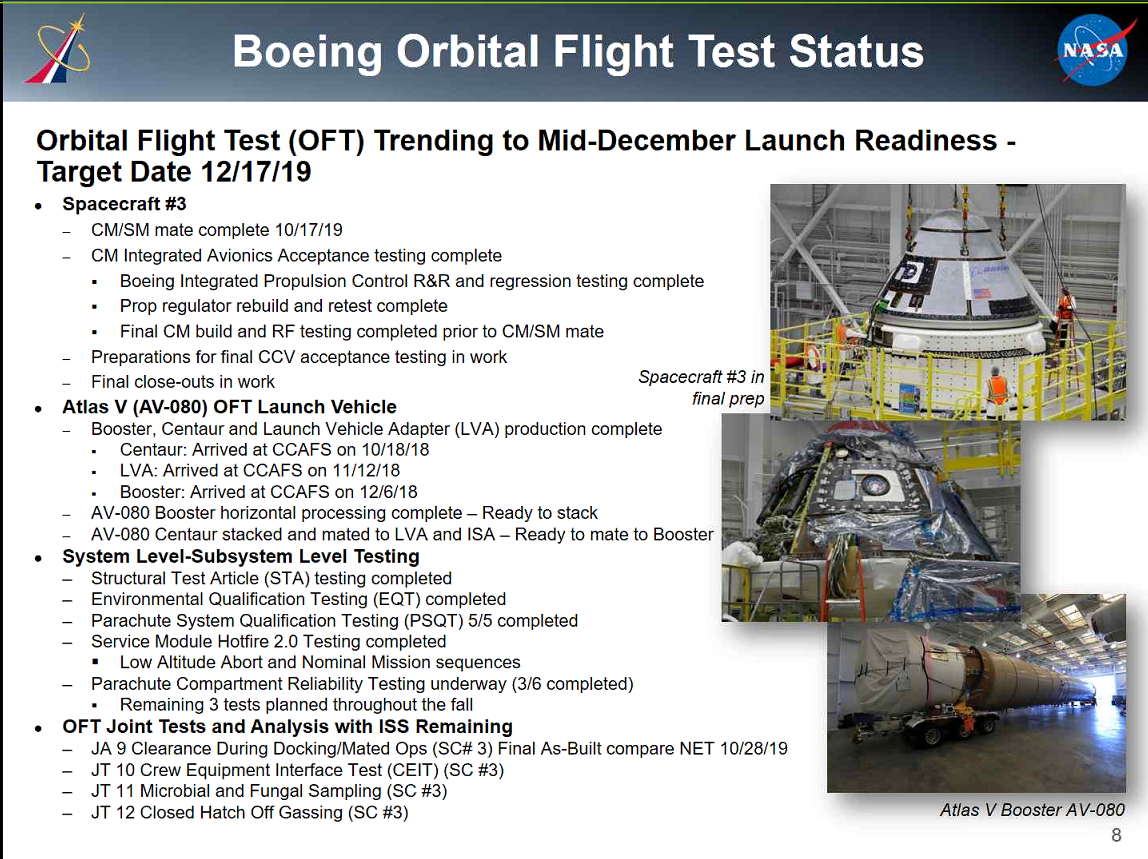 Speaking to the HEO committee of the NAC, Kathy Leuders said, “We’re headed into this major period of final, big integrated tests along with tons of certification work.  It’s not just paper; its all the data showing the designs are qualified and that we have the vehicles at the correct risk level to be ready to fly.”

Specifically to the Pad Abort test, Ms. Leuders said to the HEO NAC committee, “This is a huge test for us and Boeing.  Obviously, it is important for us to understand how the separation system works between the Crew Module and Service Module, checking out the chutes, and making sure our predictions are lined up right.”

Ms. Lueders continued, noting that while this abort test is not mandatory for OFT, it will play into NASA and Boeing’s decision on whether they are ready to roll the OFT vehicle from the Commercial Crew and Cargo Processing Facility (C3PF) near the Vehicle Assembly Building to the Vertical Integration Facility at SLC-41 to stack with the Atlas V later this month.

“So there is a risk for this test to OFT.  OFT does not have the abort system on it. But obviously the way the system separates and everything else will reflect on our OFT progress.  So it is critical for us to get this abort done and understand it all prior to doing rollout of the spacecraft for OFT.”

A specific date for Starliner’s move to the launch pad for the OFT mission has not yet been publicly released, with NASA only noting a “mid-November” target.

At her 30 October presentation to the HEO NAC, Ms. Lueders presented a slide on the status of OFT, on which it was revealed that the Atlas V rocket for this mission had not yet begun stacking.