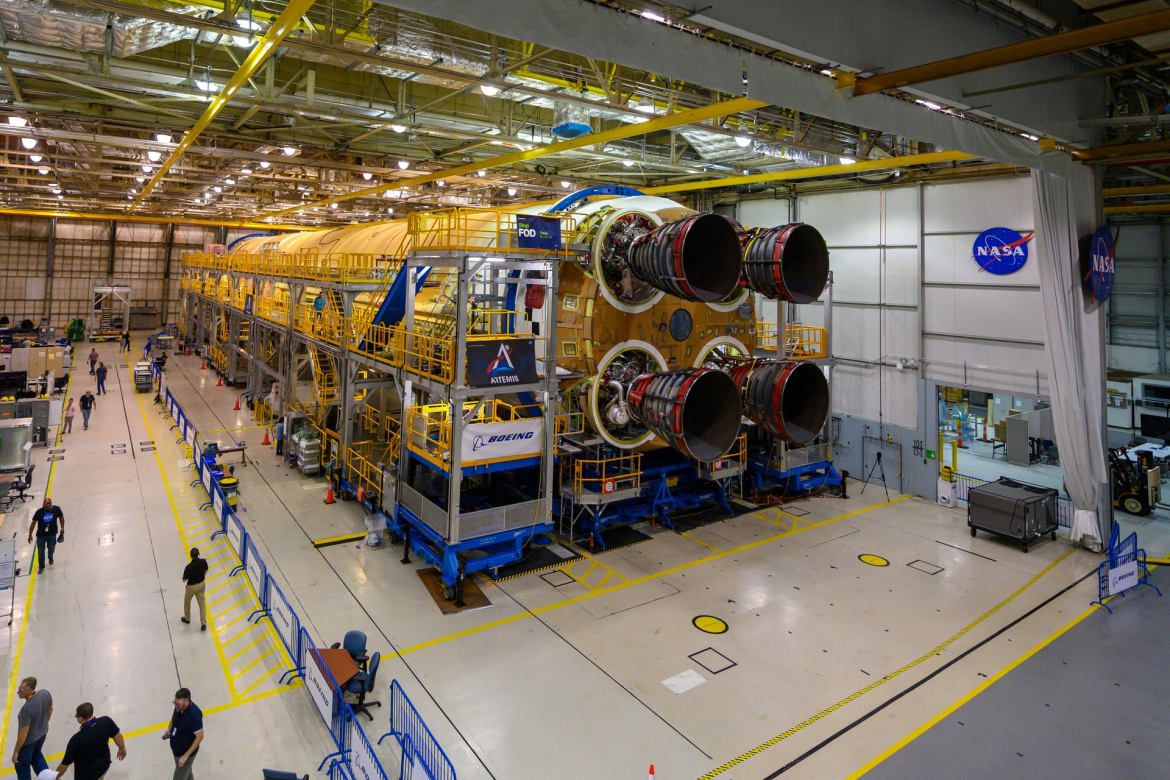 NASA and prime contractor Boeing are working to finish assembly and checkout of the first Space Launch System (SLS) Core Stage next month and send it on its way to a rocket test facility by Christmas. Aerojet Rocketdyne and Boeing attached the last of four RS-25 engines on the stage in early November at NASA’s Michoud Assembly Facility (MAF) in New Orleans.

With the re-named Space Shuttle Main Engines (SSME) attached and almost all the other working equipment installed in Core Stage-1, Boeing was starting an estimated month’s worth of integrated testing on Saturday. Simultaneously, NASA has started a series of official documentation audits and pre-shipment reviews at Michoud ahead of the completion of assembly.

When completed, Boeing will turn over the stage to NASA for transportation by barge from MAF to the Stennis Space Center in Mississippi for several months of “Green Run” acceptance testing of this first flight article in the B-2 Test Stand there. The Final Integrated Functional Testing (FIFT) will help verify the stage is ready to leave MAF for Stennis, which NASA and Boeing are hoping can happen by the end of the year.

“Testing, FIFT, will start Saturday,” Craig Williams, Boeing’s Core Stage Integrated Product Team Director, said on Thursday, November 14. “We’ll power up the systems tunnel and start testing and then run that test campaign through completion, and there’s fourteen total test cases that we have to run throughout the various systems.”

“The engines will complete what we call their hard mate tomorrow (November 15) first shift, enabling them to be ready for testing,” he said. While Aerojet Rocketdyne technicians and engineers worked with their Boeing counterparts to mate the engines to the aft end of the stage in October and November, Boeing was working to finish outfitting the working components on the rest of the stage.

“The feedlines are done, all the joints are completed and mated and passed leak test, so both the one-hundred eighty and zero-degree feedlines are done,” Williams noted. “The press lines have one bellows and two press line segments left to install and six leak tests associated with those installs and then they’ll be done.” 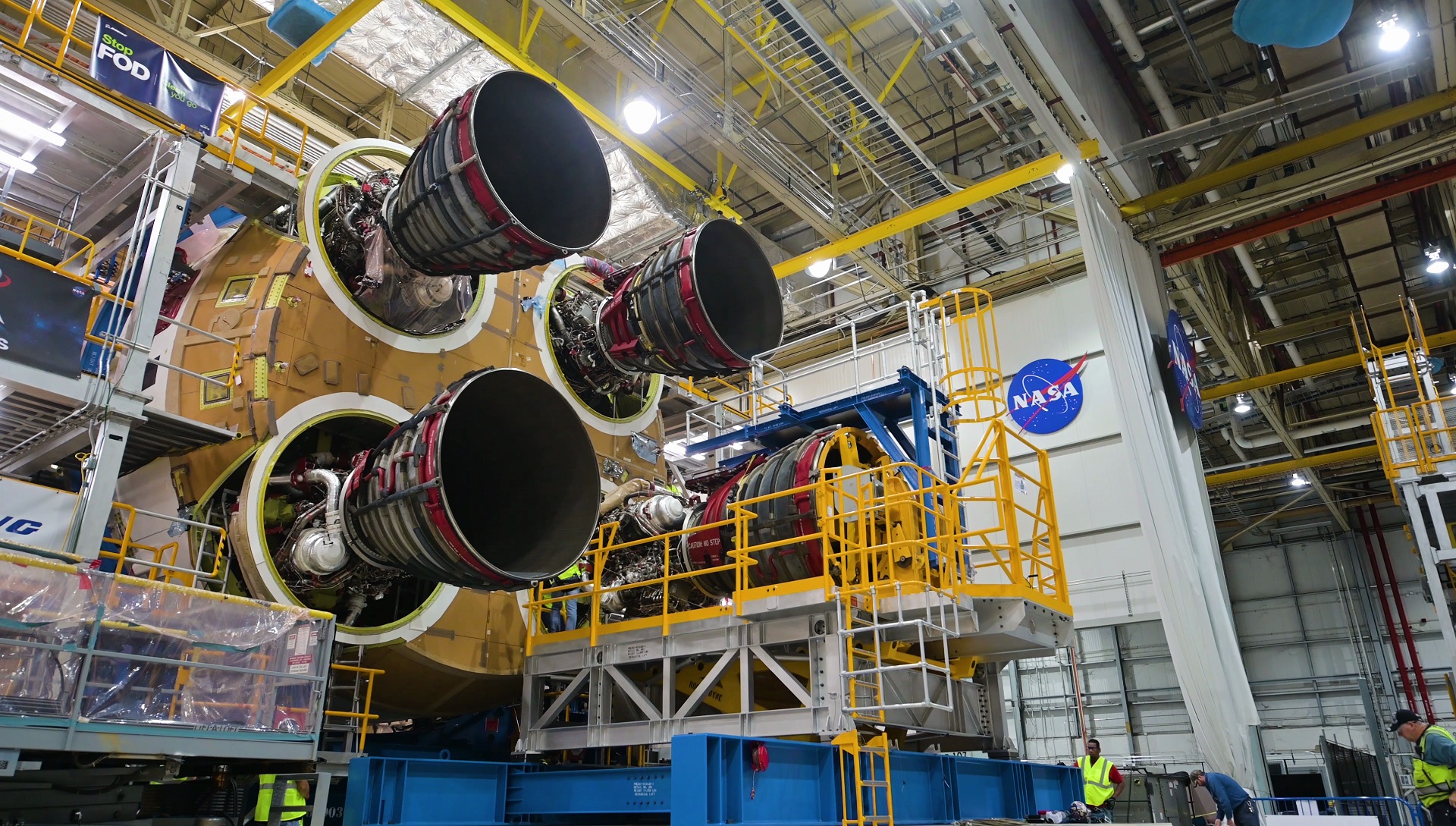 (Photo Caption: Engine 2060 is lined up with the Main Propulsion System elements of the number four engine position in Core Stage-1 in early November. As in the Shuttle Orbiter boattail, the engines are clocked in different orientations for a better layout of all the equipment inside the engine section to service the engines.)

“The systems tunnel is wrapping up to support testing tomorrow (November 15). We have a few straggling wire harnesses that we’re finishing up ‘WEETECH-ing‘ on, then from a testing position systems tunnel will be ready so from a structural outfitting position we’re virtually done when the press lines will be done next week.”

The liquid oxygen (LOX) feed system in the engine section is connected to the LOX tank at the top of the stage by two large feedlines, also called downcomers, that run in large part on opposite sides of the stage’s exterior. The press lines route gaseous hydrogen and oxygen tapped off from the running RS-25 engines to repressurize both propellant tanks as they empty.

The pressurization gas runs up to the top of both propellant tanks to keep a sufficient amount of ullage pressure in them for structural integrity.

After FIFT, Williams said: “What that will leave is external closeout work. Fairings, blankets, access doors, TPS (Thermal Protection System), cork, taping, that kind of work activity and we’ll have a series of days where we’ll have final outfitting that readies the vehicle for shipment.”

“We’re getting really, really close so we’re pretty excited, holding to a December plan, and just getting ready to get this thing to Stennis,” Williams said.

Installation of the fourth and final Shuttle main engine in the back of the stage on November 6 was a major visible milestone. “We started with engine two top-left, then we did engine one,” Andrew Rostron, RS-25 engine installation field engineer with Aerojet Rocketdyne, said. 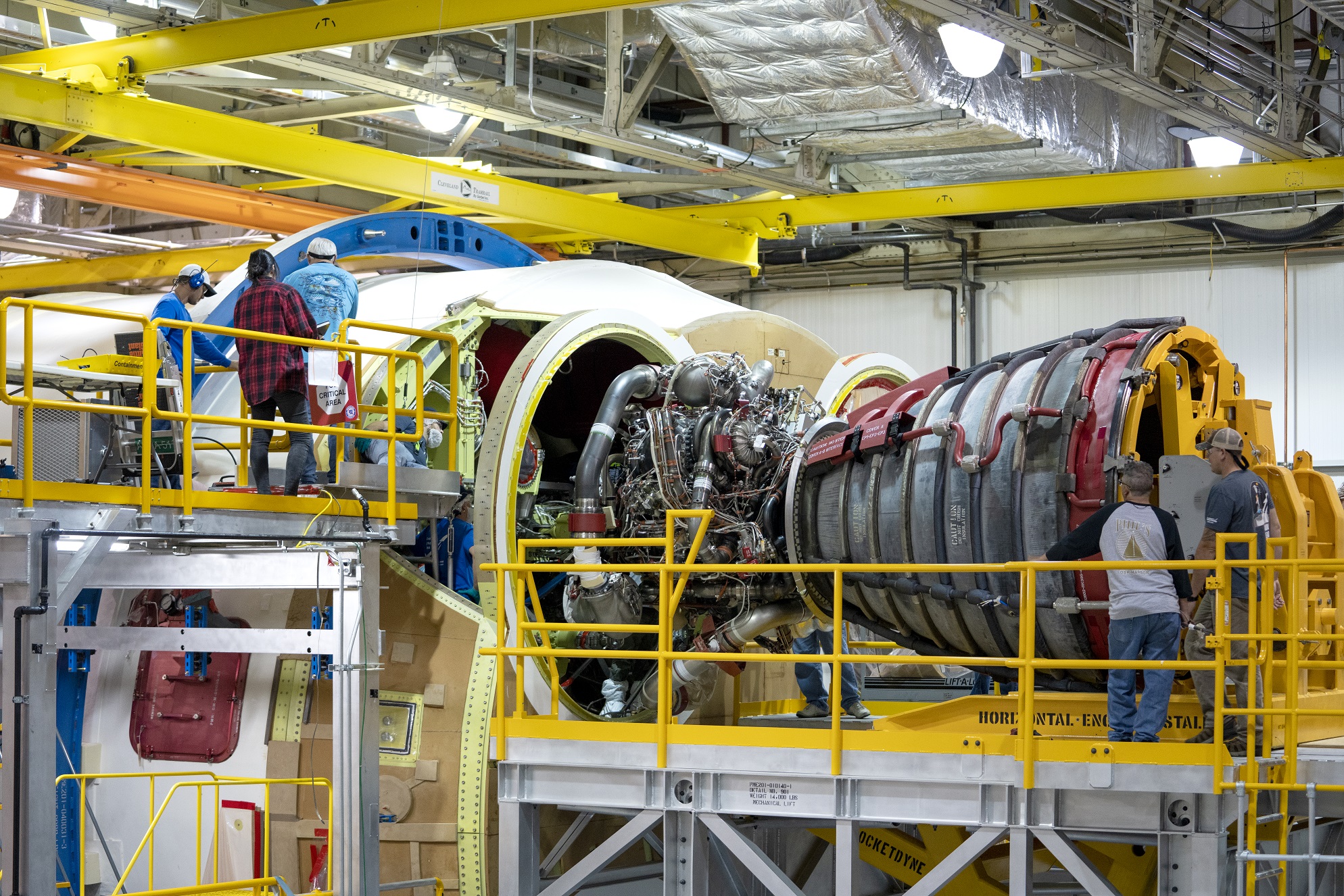 (Photo Caption: Engine 2056 is maneuvered into the number two engine position on October 19. Core Stage-1 is the first working stage article, which made this the first Core Stage engine install of the SLS program. During installation, Aerojet Rocketdyne and Boeing technicians have to make sure the large low-pressure ducts that ring the front of the engine clear the opening in the boattail.)

“We use stiff arms to secure the weight of the engine, so that kind of temporarily holds the engines and properly keeps them in a safe configuration as a soft install.”

Engine 2056 was the first engine installed in the number two position on October 19, top-left in the current stage orientation. Engine 2045 was attached on October 29 in the top-right, number one position, followed by engine 2058 in the bottom-left/number three position, and engine 2060 in the bottom-right/number four position.

“We actually got engine three and four installed in a matter of three days, so we knocked those two out and now we’re in the process of securing the engines,” Rostron noted in the interview on November 11. “That’s part of hard install.”

“It’s all a flow process that’s based on the access to the vehicle. We use a lot of modeling to figure out a proper way to remove our ground support equipment and properly secure the engines.”

“We use a lot of the folks that are my leads with that [experience] on Space Shuttle and their knowledge and we use a lot of model-based [analysis] to figure out the best way to get our folks inside the vehicle and get access and then we work through the flow process of properly securing the engine,” Rostron added. 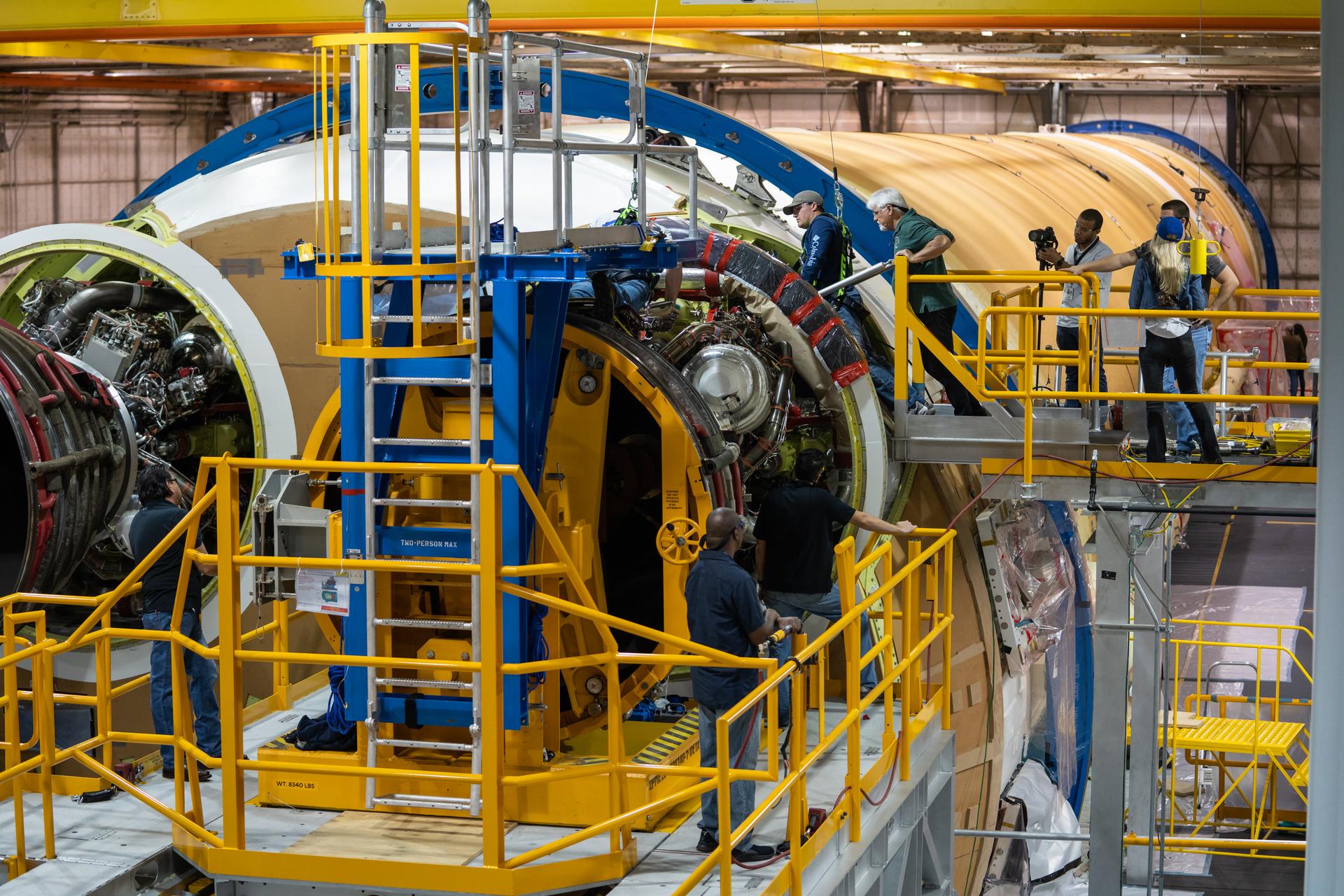 (Photo Caption: Engine 2045 is moved into the number one engine position during installation activities on October 28 with two-hundred feet of stage extending into the background. The two blue roll rings are pinned to the front of the forward skirt and the structural ring in the engine section where the SLS Solid Rocket Boosters attach at their aft end. In the lower right, ground-side umbilical plates are attached to the vehicle’s Tail Service Mast umbilicals. Two more ground-side plates are attached to the other stage umbilicals on the opposite side of the intertank and forward skirt.)

“We are limited on our platforms, so what we try to do is we secure two engines at one time. So we focused on the lower ones first, engines three and four, then we moved up to engines one and two and that’s what we’ve been working on.”

With all the working parts of the stage connected, the FIFT will verify that NASA and Boeing have an operating rocket stage that they can get ready at Stennis to load with propellants for the first time next year and then test-fire. In addition to propellant tanks and rocket engines and helium tanks and hydraulic pumps, the Core Stage houses the flight computers and dozens of avionics boxes to make everything work as programmed.

“Much of the FIFT is around sensor channelization, meaning you send a command and it does what it’s supposed to do,” Williams explained. “That’s a vast majority of it and there’s connectivity and talk between the top of the rocket down, from all the avionics boxes in the various volumes in the forward skirt and the intertank and they talk to the engine section components that they need to communicate with, elements like that.”

“Let me read you some highlights of what we do,” he said. “So we’ll have the power and application, health and status testing, so that’s communication between all the systems. Then we’ll have some specific avionics boxes where we’ll do power, applications, health, and status.” 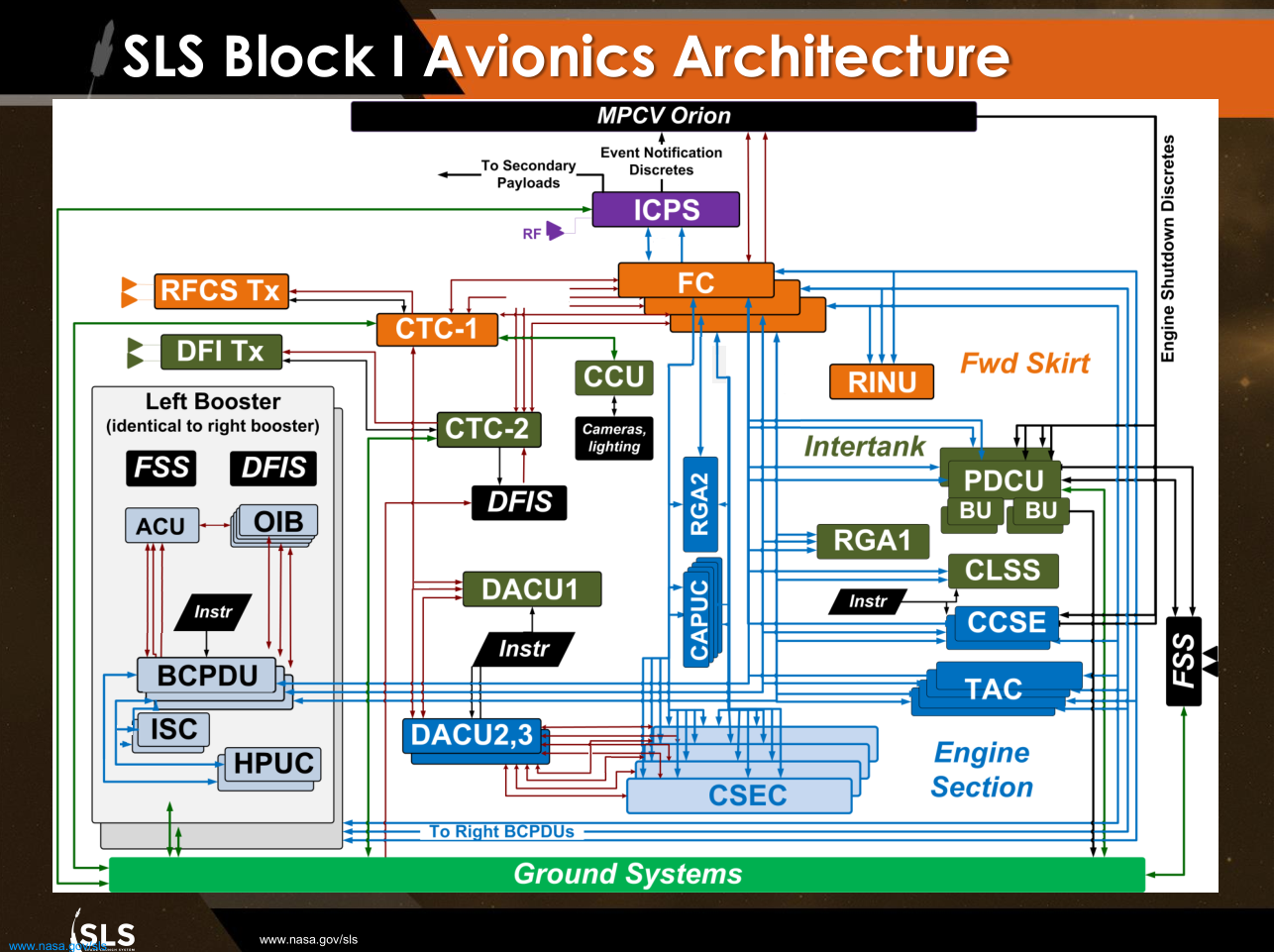 (Photo Caption: A schematic diagram of the different avionics boxes distributed throughout the SLS Block 1 vehicle, much of which is located in the Core Stage. The flight software runs on the three flight computers (FC) in the forward skirt of the Core Stage. During final integrated functional testing (FIFT), electrical ground support equipment (EGSE) will run the flight computers through a series of checkout test cases to verify the vehicle is connected and functioning properly.)

“We’ll do some discrete engine shutoff testing [and] we’ll do the engine leak test,” Williams added. “We’ll do all the electrical interface testing to the engines. We’ll have both LOX and LH2 testing, so we’ll test those subsystems out.”

“We’ll do some flight controller inhibit testing, we’ve got battery health and power testing, we test the imagery system, the S-band/RF system, and then, of course, we have what we call the vehicle functional system, that’s kind of the whole vehicle talking to each other.” 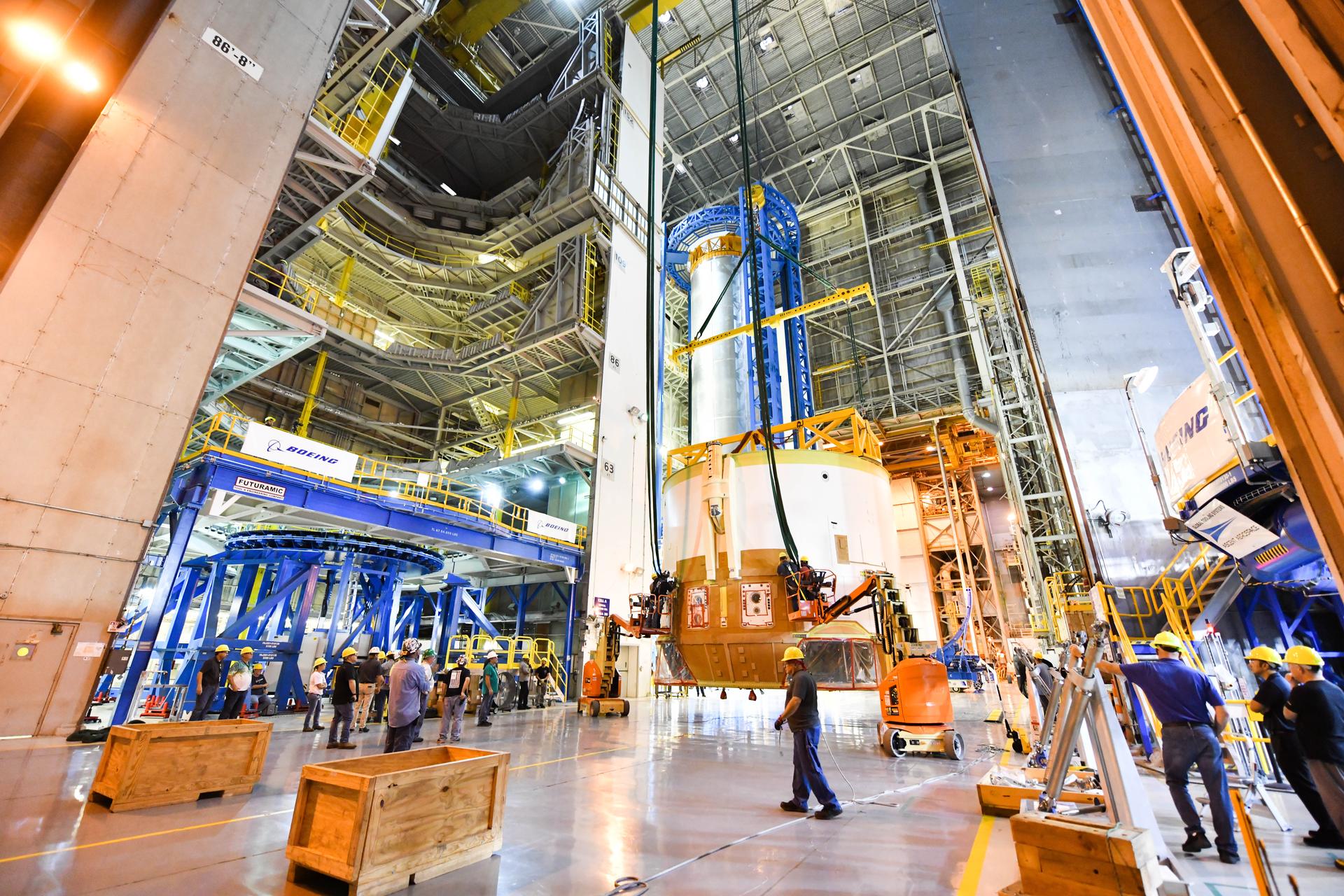 (Photo Caption: The Core Stage-1 engine section and boattail hang from one of the heavy cranes in the Building 110 aisle while attached to a special breakover truss structure during breakover prep activities on September 12. Technicians are attaching the second crane to the +Z side of the engine section to enable the two cranes to rotate the element from vertical to horizontal.)

The FIFT is the last major checkout to complete before final work to close out the stage to ship. “We have somewhere in the neighborhood of twenty-two, twenty-three days to thirty days of test campaign to do,” Williams said. “We’re obviously trying to work that back to the left.”

“We’ve done a lot of risk mitigation testing with our systems tunnel in terms of individually wringing out and ‘WEETECH-ing’ those cable runs, so we know those connections are good and we expect to have higher first-time yields in this testing campaign than we had earlier on, so we have a bit more confidence and are seeing little bit less risk than we have in the past testing campaigns.”

The systems tunnel houses all the power and data cabling to connect the stage’s computer and other electrical equipment. It spans much of the length of the stage on the -Z side, allowing the flight computers at the top of the rocket to monitor the health of the vehicle in flight and before liftoff via inputs from avionics and instrumentation all over the stage, from the inertial navigation unit to liquid level sensors in the propellant tanks to command and telemetry processors, rate gyros, and data acquisition boxes.

It also provides the command path for the flight computers to control and manage propulsion, mechanical, and other vehicle systems and fly the launch vehicle to its intended delivery targets at Main Engine Cut-Off (MECO). 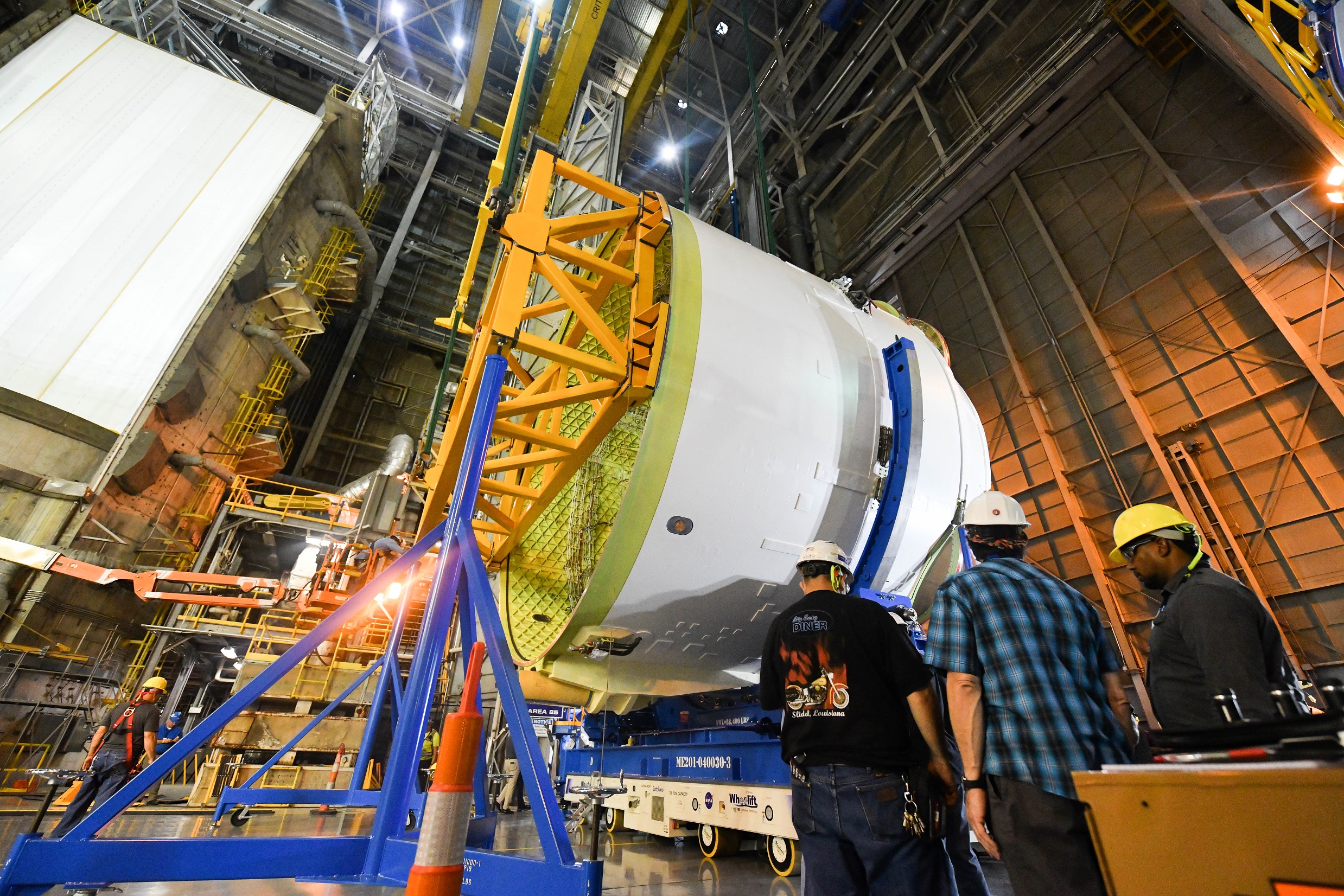 (Photo Caption: The engine section and boattail sit partially secured to a Rotational Assembly and Transportation Tool (RATT) after being rotated to horizontal on September 12. The two tripod jack stands shown being connected to the breakover fixture supported its multi-ton weight until it could be disconnected from the top of the engine section barrel.)

Although work to finish the gaseous oxygen and gaseous hydrogen (re)pressurization lines isn’t quite complete, Boeing found a way to start the integrated functional testing in parallel. “We’ve identified testing we could start in a sequence that didn’t require press line completion to obviously enable us to continue concurrent assembly and testing operations,” Williams explained.

“So the press lines will be the lagger of the external outfitting and like I said, there’s not much work there but it’ll go into next week.”

With the FIFT underway this week, Boeing is still aiming to handover the stage to NASA next month for transportation to Stennis. “We’re certainly shooting for December,” Williams said. “The team goal would be to be home for Christmas, that’s absolutely the goal, but we’re certainly committed to December.”

December 23 is a current forecast for the rollout of the stage at MAF when NASA would roll the stage on its transportation system about one mile from the industrial area at Michoud to the dock where the agency’s Pegasus barge is waiting to carry the rocket to Stennis.