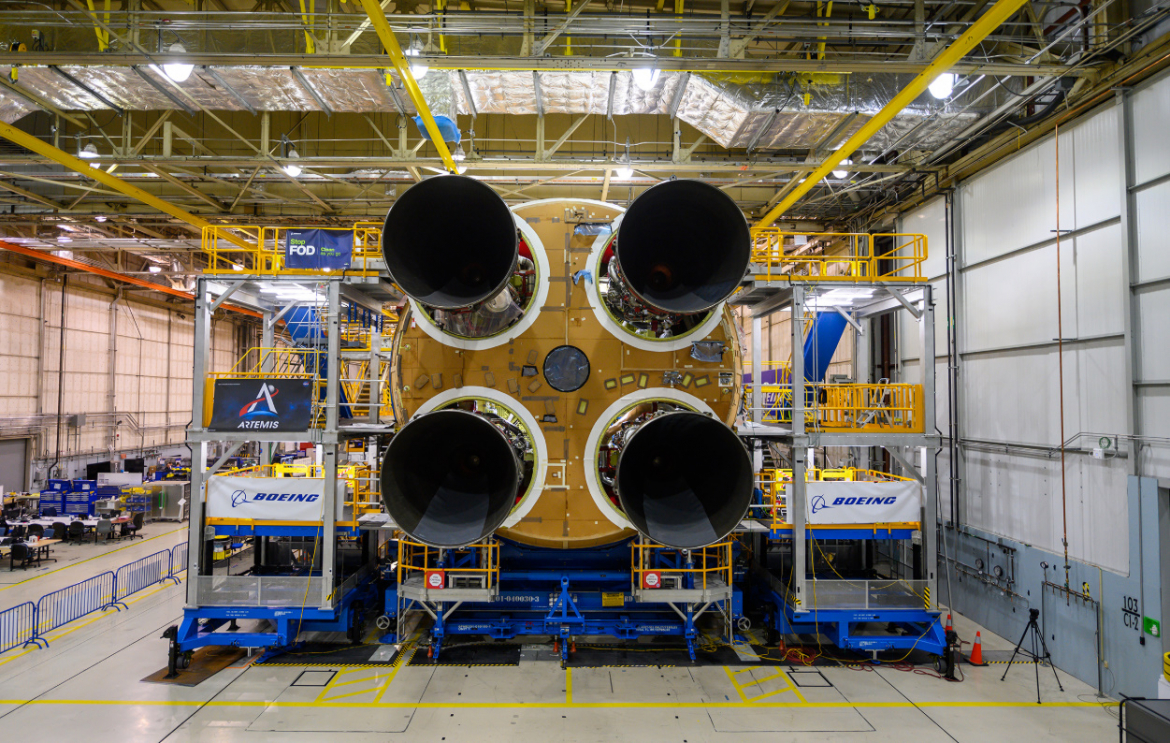 In a major milestone for NASA’s Space Launch System (SLS), all four RS-25 engines – veterans of the Space Shuttle Program (SSP) – have been installed into the core stage of the rocket that will conduct the maiden flight of NASA’s new monster rocket on the Artemis-1 mission.

SLS will use the full inventory of flight-proven Space Shuttle Main Engine (SSMEs), or RS-25Ds, before exhausting the stock and moving to the RS-25E.

The RS-25E – already contracted by NASA to Aerojet Rocketdyne – will be cheaper to build as the new engines will be specifically built as expendable units, as opposed to the built-in reusability of the RS-25D.

While many space fans are unhappy about the famous RS-25Ds being prepared for what will ultimately be a watery grave, SLS will benefit from the flight-proven experience of the engines for the opening missions.

Now prepared in sets of four, as opposed to flight sets of three during Shuttle, RS-25 installation tasks had to wait until the engine section was mated to the core section during processing at the Michoud Assembly Facility (MAF).

Once that milestone was achieved, engine installation began in mid-October with Engine 2056.

The first of four RS-25 engines has been attached to the #NASASLS core stage that will help power #Artemis I to the Moon. 🌙 @NASA_SLS, @BoeingSpace and @AerojetRdyne will now integrate the propulsion and electrical systems. DETAILS >> https://t.co/6BbXSepr9u pic.twitter.com/ujiBu6EsSy

As a Block II engine, E2056 last rode two missions with Shuttle Discovery, famously with STS-114 as the program returned the United States to human spaceflight after the loss of Columbia.

It also remained with Discovery during the vehicle’s turnaround and launched on the follow-up mission, STS-121, before being placed into storage as a flight spare.

The second engine to be installed was E2045, a hugely experienced engine that has ridden with the Shuttle as a Block II since STS-110 with Atlantis in 2002.

Having also flown on STS-113, it then joined E2056 for the STS-121 flight on Discovery, meaning the two engines will once again launch together on the Artemis-1 mission.

E2056 also launched on the final Shuttle mission, helping Atlantis close out the program with the STS-135 mission in 2011.

The third engine to be installed into the SLS core stage was E2058, one of the newer engines – built as a Block II and debuting with STS-116, which saw Discovery launch to the ISS in 2006.

NASA tweeted a picture of the third engine being bolted into the core stage, although it was later revealed the fourth engine was already in the process of being attached at the time NASA published the photos.

Progress Update! 🚨 The third RS-25 engine is attached to the SLS rocket's core stage for #Artemis I. @NASA, @BoeingSpace and @AerojetRdyne will now integrate the propulsion and electrical systems within the structure to complete the installation. MORE >> https://t.co/haFGDeHj8T pic.twitter.com/9AQ60YWzuY

That pointed to a decreasing gap between each engine installation as engineers worked through the processing flow, potentially refining an installation roadmap during this first-time operation.

That final engine to be installed was E2060.

This unit has the least experience out of the four Artemis-1 engines having only flown three times, starting with its first launch powering Endeavour into orbit during STS-127. It then joined Discovery during the STS-133 mission before also closing out the Shuttle Program with the STS-135 launch involving Atlantis.

Per L2 information, all of the Block II RS-25Ds can now be accounted for, along with a few additions.

For Artemis-2, the first crewed mission of Orion, two first time flyers will be involved, namely E2062 and E2063.

E2063 was acceptance tested in October 2017, as a part of hot-fire testing in support of initial SLS certification – a program conducted at the Stennis Space Center. Both E2062 and E2063 are assigned to the second SLS launch and will serve as spares for the first launch campaign. 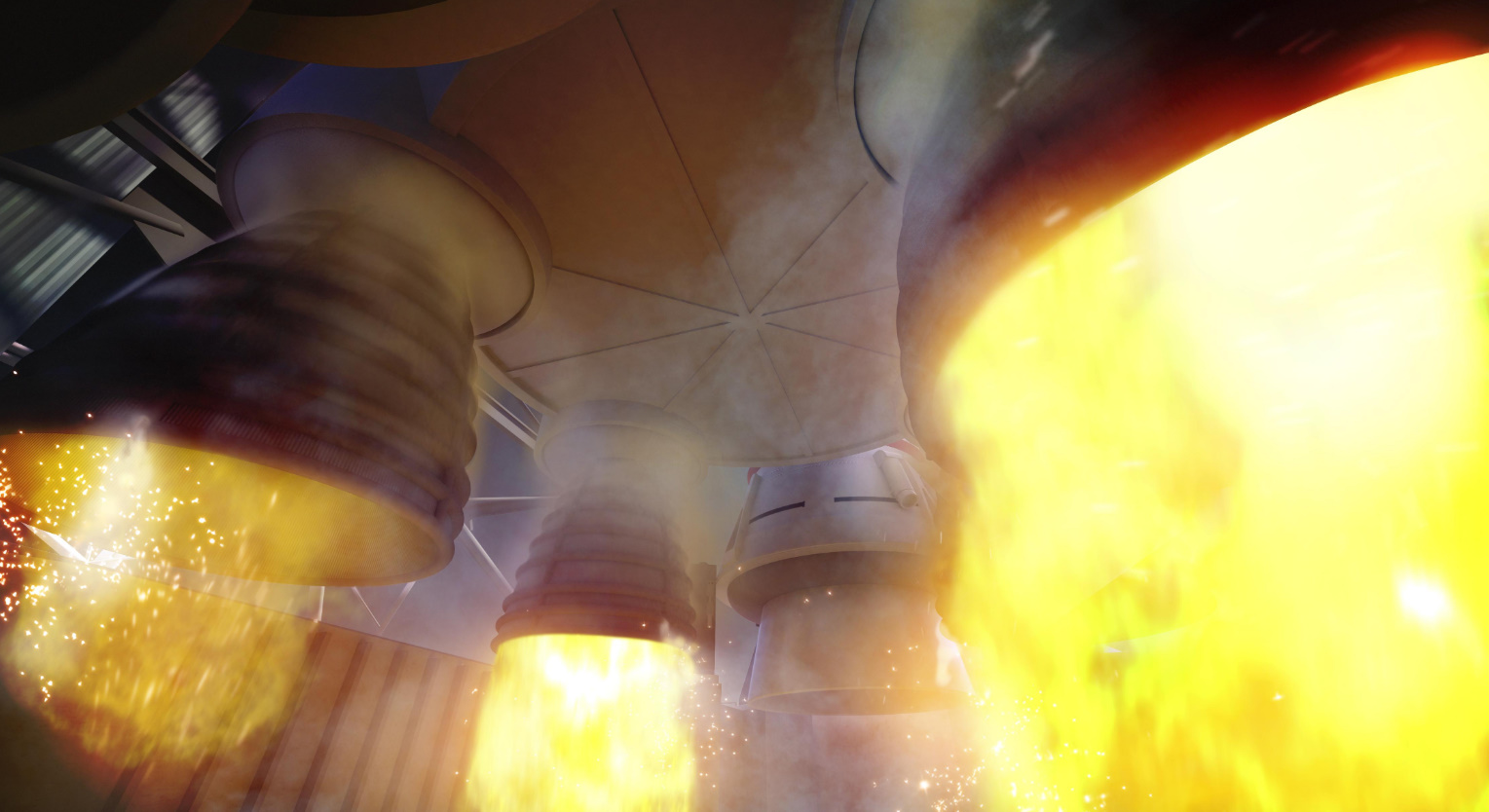 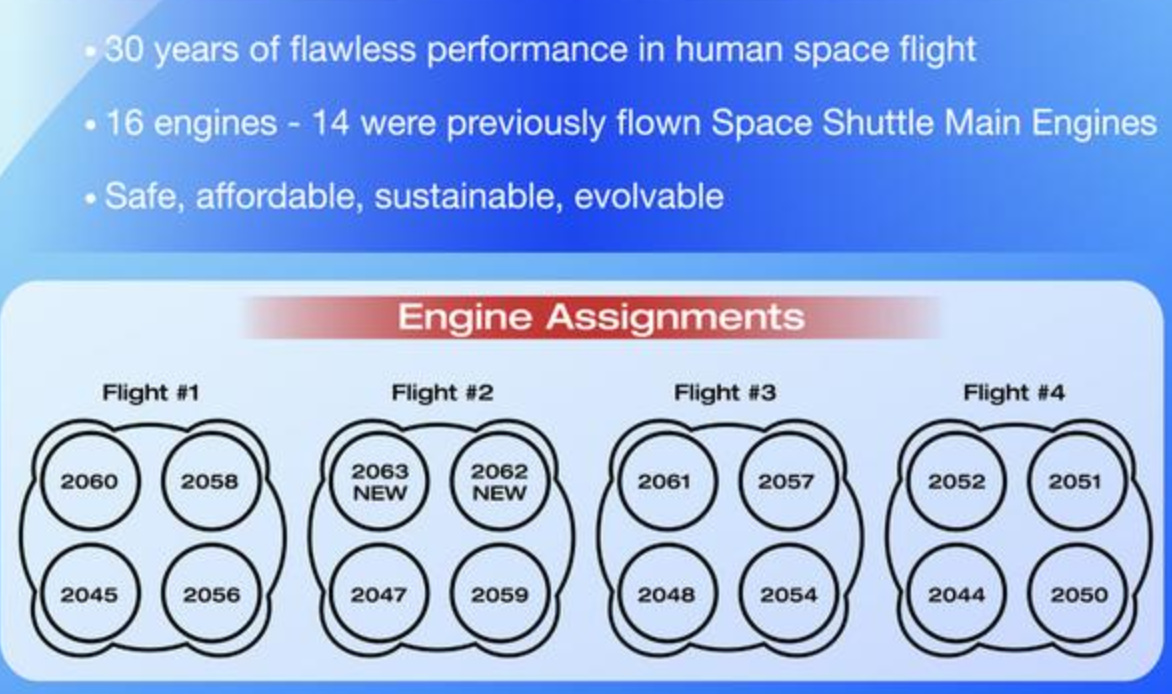 Other notable engines from the Shuttle era are E2043 – which was a flown Block IIA engine/RS25C but was never flown in a full Block II configuration. E2049, 2053 and 2055 were lost with Columbia during the STS-107 disaster.

With four engines now installed into the core stage for the Artemis-1 mission, major milestones still lay ahead.

Next up will be the First Integrated Functional Test (FIFT) to check out the integrated core stage before preparations are made for the trip to Stennis on the Pegasus Barge.

It is hoped that this shipping milestone will occur in December, allowing for preparations early in 2020 for the huge event of the four RS-25s all firing up together during the Green Run test.

Should all proceed without major issues, the Core Stage can finally look forward to a trip to the launch site at the Kennedy Space Center. It will be put through an integration processing flow, where it will be lifted and stacked on to the Mobile Launcher (ML-1) inside the Vehicle Assembly Building (VAB).

Transportation and lift operations were recently practiced with the Pathfinder.

The ML will already be hosting the two five-segment Solid Rocket Boosters (SRBs) on its deck by the time the Core Stage is lowered into place, following a path seen during the Space Shuttle Program where the External Tank was lowered into place between the two boosters.

Once the Core Stage is in place, the Upper Stage and Orion will arrive to be mated on top of the Core. The integrated Stack will then rollout of the VAB to Pad 39B in preparation for the maiden launch of the Space Launch System.

The actual launch date for Artemis-1 continues to be officially publicized as occurring in late 2020, although it is all-but-certain to move into 2021.