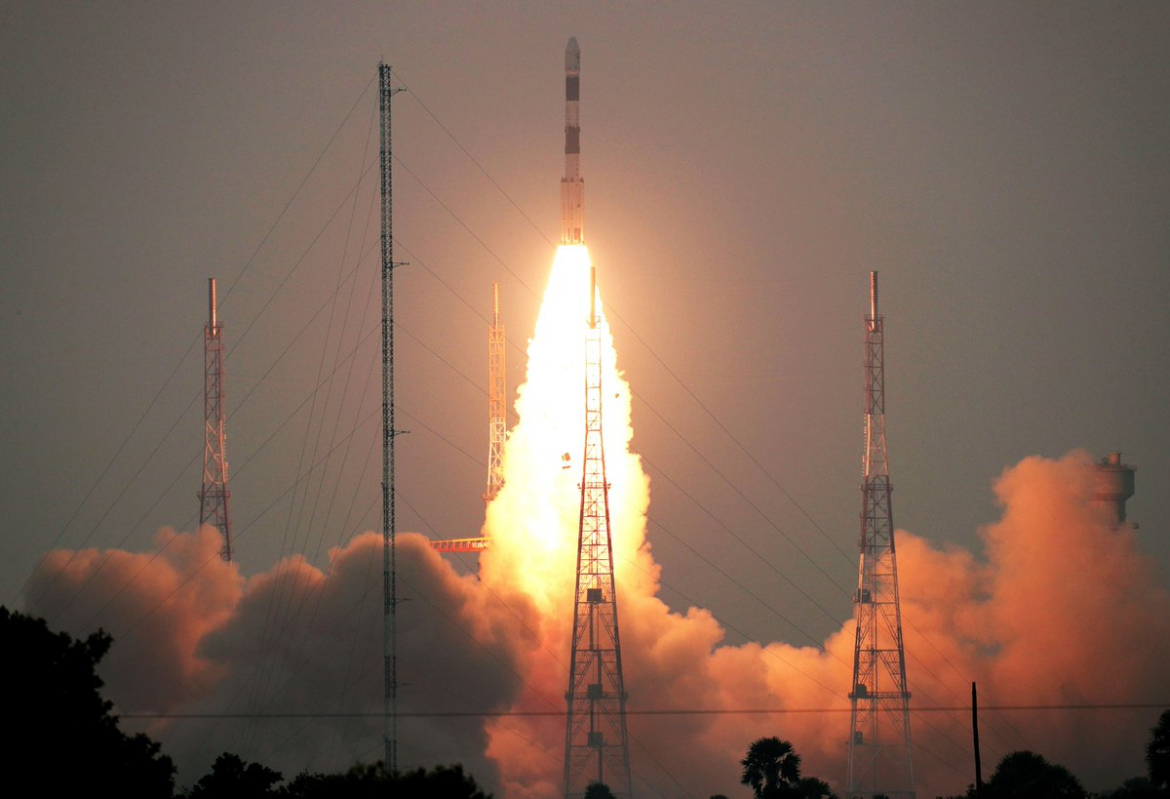 India deployed the first in a new generation of remote sensing satellites Wednesday, via its PSLV rocket. The Cartosat-3 satellite lifted off at 09:28 local time (03:58 UTC), with the PSLV taking just under eighteen minutes to place it into orbit. Thirteen nanosatellites were also deployed by Wednesday’s launch.

The Cartosat-3 spacecraft is the latest in a series of Earth observation satellites that India has launched over the past fifteen years. Following on from the successful Cartosat-2 series, it will provide images with higher resolution than its predecessors. Further Cartosat-3 satellites are expected to be launched in the coming years to upgrade India’s imaging capabilities for both civilian and military applications.

The satellite’s mid-range infrared (MWIR) imager has a resolution of five meters (16.4 meters). It will operate in a near-circular sun-synchronous polar orbit, about 509 kilometers (316 miles, 275 nautical miles) above the Earth at an inclination of 97.5 degrees. 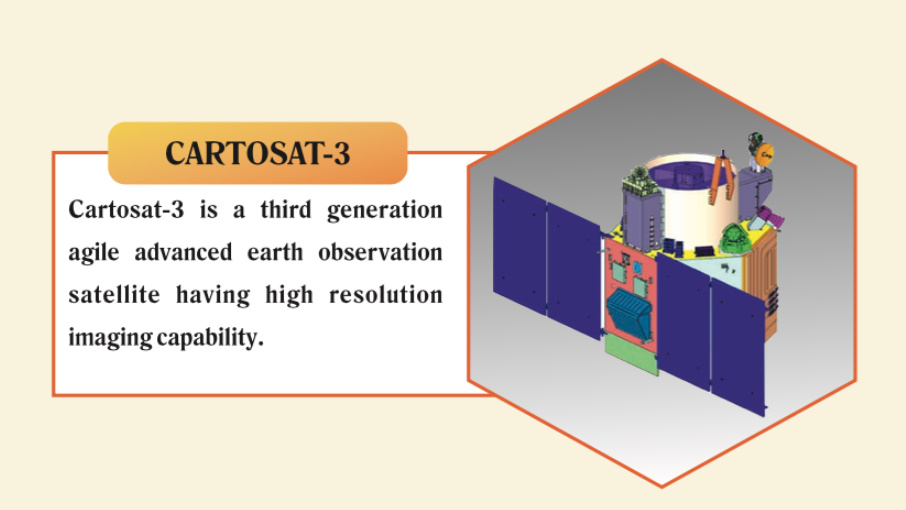 Cartosat-3 will be operated by the Indian Space Research Organisation (ISRO), who was also responsible for its construction. It is powered by two deployable solar arrays, generating two kilowatts of electricity, and is designed to operate for at least five years.

Cartosat grew out of the earlier Indian Remote Sensing satellite program, whose first satellite was launched aboard a Soviet Vostok-2M rocket in 1988. In the late 1990s, the Oceansat, Resourcesat and Cartosat series were spun off from IRS, with the IRS-P5 satellite launching on 5 May 2005 as Cartosat-1. This satellite’s panchromatic imaging payload had a resolution of 2.5 meters (8.2 feet).

With January 2007’s launch of Cartosat-2, the imaging resolution was increased to one meter (3.3 feet). Cartosat-2 was followed by six more spacecraft designated Cartosat-2A to 2F, which are believed to be primarily used for military reconnaissance. The 2A and 2B satellites were deployed in April 2008 and July 2010, with the final four satellites launching between 2016 and 2018 to replace them and increase the size of the constellation.

The first two satellites were near-identical copies of Cartosat-2, with later satellites adding a multispectral capability. ISRO has described the follow-up satellites as “Cartosat-2 series satellites” rather than identifying them by individual names.

Like Cartosat-2, Cartosat-3 will be followed by additional satellites of the same design. Two more satellites, Cartosat-3A and 3B are due to launch next year.

For its journey into orbit on Wednesday, Cartosat-3 was joined by thirteen nanosatellites. Twelve of these make up the Flock-4p payload for American company Planet Labs. Thee fourth-generation spacecraft will join the largest constellation of satellites ever deployed, upgrading Planet Labs’ imaging capabilities.

Each of the Planet Labs satellites, known individually as Doves, is built to the three-unit CubeSat standard measuring 30 by 10 by 10 centimeters (11.8 by 3.9 by 3.9 inches). The satellites can produce images at resolutions of up to three meters (9.8 feet), with their large constellation of low-cost, short-lived satellites allowing Planet Labs to provide customers near-real-time coverage with multiple images of the same location each day. 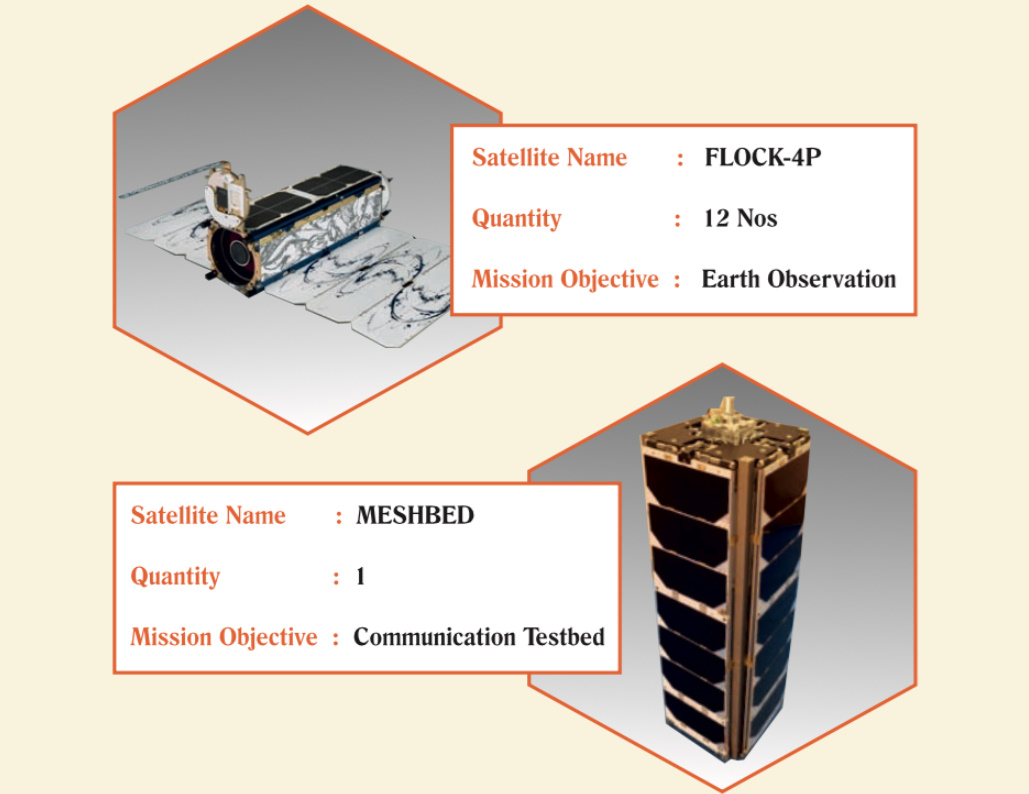 Flock 4p is the second group of SuperDove generation satellites to launch, following Flock-4a whose twenty satellites flew aboard another PSLV launch at the end of March. Over 300 Dove CubeSats have launched to date, with the initial prototypes flying in 2013 and the first operational satellites reaching orbit the following year.

The fourteenth satellite aboard Wednesday’s launch was Meshbed. Like the Doves, this is a three-unit CubeSat for American operators, in this case, Analytical Space Incorporated and MITRE Corporation.

The satellite will serve as a demonstrator for a communications system, the Frequency-Scaled Ultrawide Spectrum Element (FUSE), which has been patented by MITRE and is expected to deliver increased bandwidth over existing similar antennae, and therefore allowing faster downlink or increased relay capacity. The Meshbed satellite features three deployable solar arrays which will provide power to the spacecraft while it is tested on orbit.

Wednesday’s launch was the forty-ninth flight of India’s Polar Satellite Launch Vehicle (PSLV), which flew in its most powerful PSLV-XL configuration. First flown in 1993, PSLV is the workhorse of India’s space program. 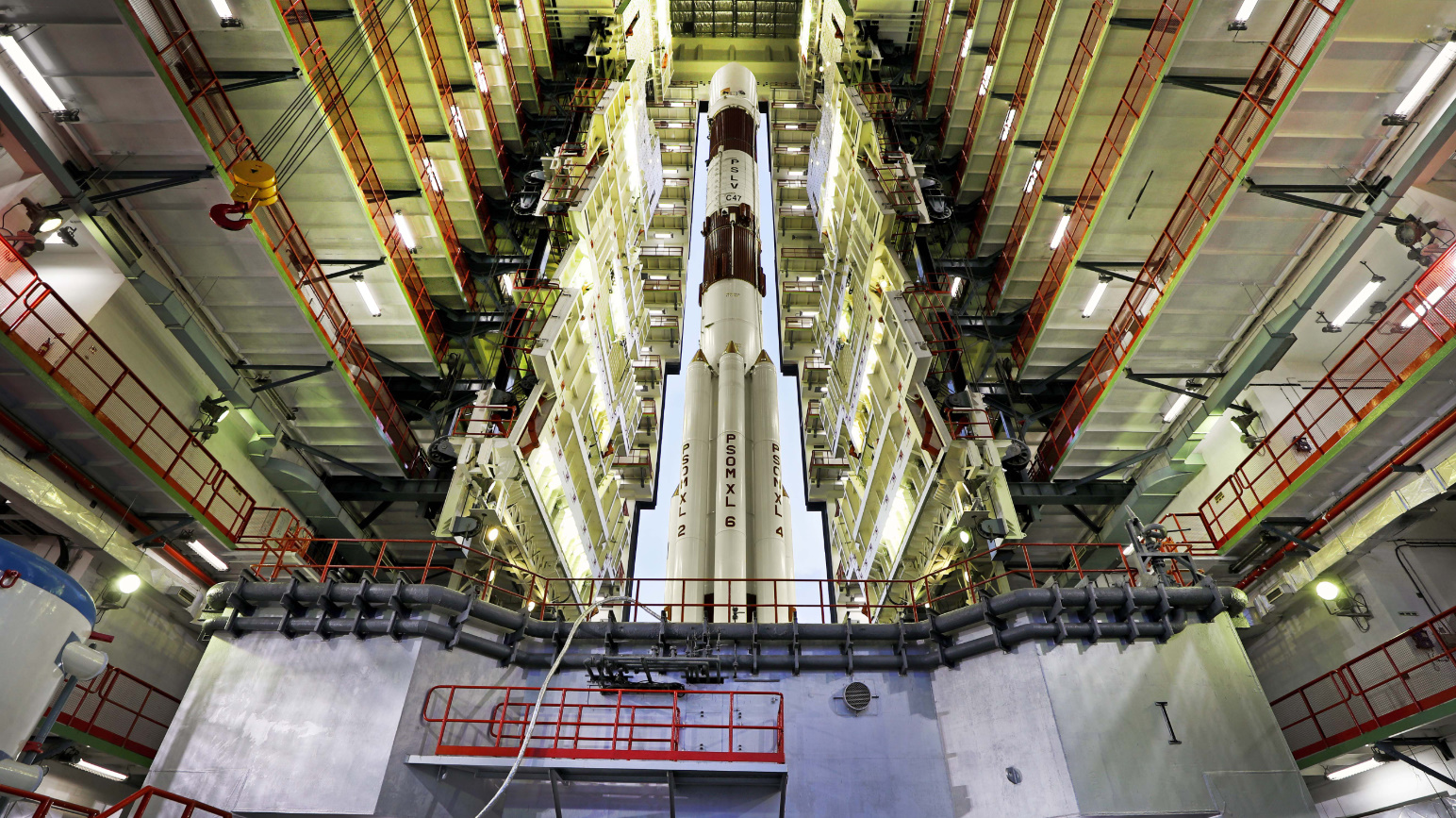 The four-stage rocket uses a mixture of solid and liquid propulsion and while it is optimized for launching satellites into low orbits passing over the Earth’s polar regions it has also been used to deploy spacecraft bound for higher orbits, including geosynchronous transfer trajectories and missions bound for the Moon and Mars. For Wednesday’s flight it was making a more routine trip into low Earth orbit.

In the forty-eight launches before Wednesday’s, PSLV has achieved forty-five successes with two failures and one partial failure. The failures came on the rocket’s maiden flight, which went out of control due to a software error, and on an August 2017 mission where the rocket’s payload fairing failed to separate. PSLV has since got back into its stride, completing seven missions successfully since the 2017 failure.

The rocket that launched Cartosat-3 was numbered PSLV C47. It flew from the Second Launch Pad (SLP) at the Satish Dhawan Space Centre on Sriharikota island in the Bay of Bengal. SLP was built in the early 2000s as India sought to increase its launch rate.

PSLV launches take place from both it and the nearby First Launch Pad, while SLP also serves the larger Geosynchronous Satellite Launch Vehicle (GSLV) in both its Mk.II and Mk.III forms. 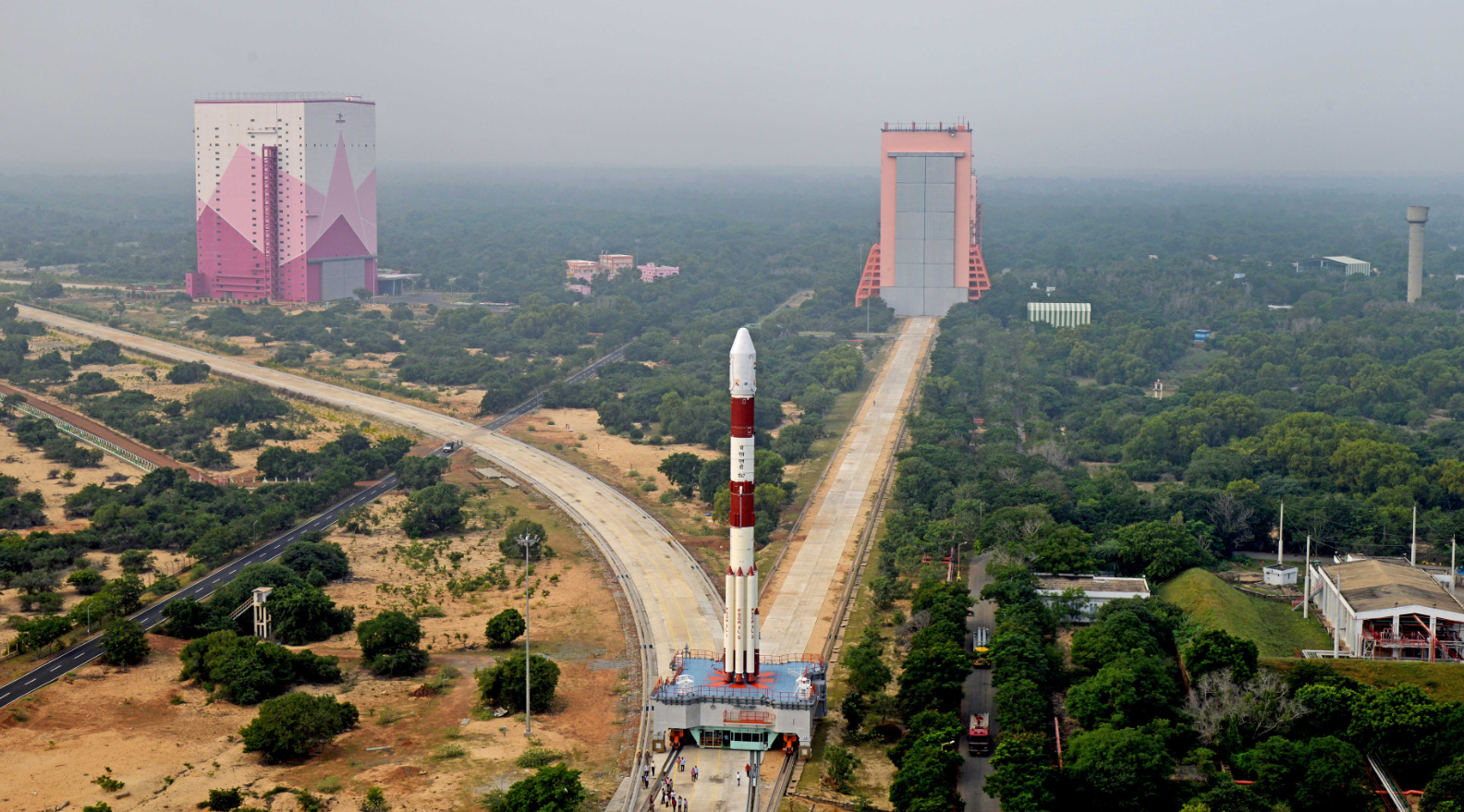 When launching from the Second Launch Pad, PSLV rockets are put together vertically atop a mobile launch platform in a Vehicle Assembly Building away from the launch pad, before being moved into position ahead of launch. PSLV C47 made the 950-meter (3,100-foot) journey to the launch pad on Monday, with the 26-hour countdown beginning at 07:28 local time (01:58 UTC) on Tuesday.

During the early stages of the countdown, propellant was loaded into PSLV’s fourth stage, with second-stage propellant loading also taking place on the day before liftoff.

When Wednesday’s countdown reached the T-0 mark, PSLV C47’s mission began with the ignition of the S-138 solid rocket motor which powers the PS1 first stage. During the early stages of flight, this is augmented by six smaller S-12 solid rocket motors in the form of PS0M-XL boosters. The first two boosters are started 0.42 seconds after first stage ignition, with a second pair igniting two-tenths of a second later. The remaining pair of boosters are air-started, igniting twenty-five seconds into flight.

After lifting off, the PSLV maneuvered onto an azimuth of 140 degrees, flying to the southeast of Sriharikota. The first pair of ground-lit boosters burned out and separated from the rocket 69.9 seconds after launch, with the second pair being jettisoned two-tenths of a second later. Separation of the air-lit motors took place 92 seconds after liftoff.

Once the last boosters had fallen away from the vehicle, PSLV’s first stage continued to burn on its own for just over 21 seconds before it burned out and separated. Second stage ignition occurred two-tenths of a second after first stage separation. PSLV’s second stage, known as the PS2 or L-40, has a single Vikas engine burning liquid propellant. Its fuel is UH25, a mixture of three parts unsymmetrical dimethylhydrazine and one part hydrazine hydrate, oxidized by dinitrogen tetroxide. Vikas is an Indian license-built derivative of the French Viking engine, used on earlier members of the Ariane family of rockets.

About 42.9 seconds into the second stage burn, PSLV’s payload fairing separated. Designated a “heat shield” by ISRO, the fairing serves to protect the upper stage and payload as PSLV ascends through Earth’s atmosphere. At the point of separation, PSLV was in space, about 115 kilometers (71 miles, 62 nautical miles) above the Earth’s surface. The fairing was no longer needed outside of the atmosphere and is discarded to reduce the rocket’s weight.

The second stage’s burn lasted just over two and a half minutes. Once it completed, the stage separated and PSLV’s third stage took over, igniting about a second later for a 70-second burn. The third stage, or HPS3, uses an S-7 solid-propellant motor. After the third stage burn, Wednesday’s mission entered a short coast phase as the rocket climbed towards the apogee – or highest point – of its trajectory. The spent third stage separated from the fourth at eight minutes and 13.2 seconds mission elapsed time. 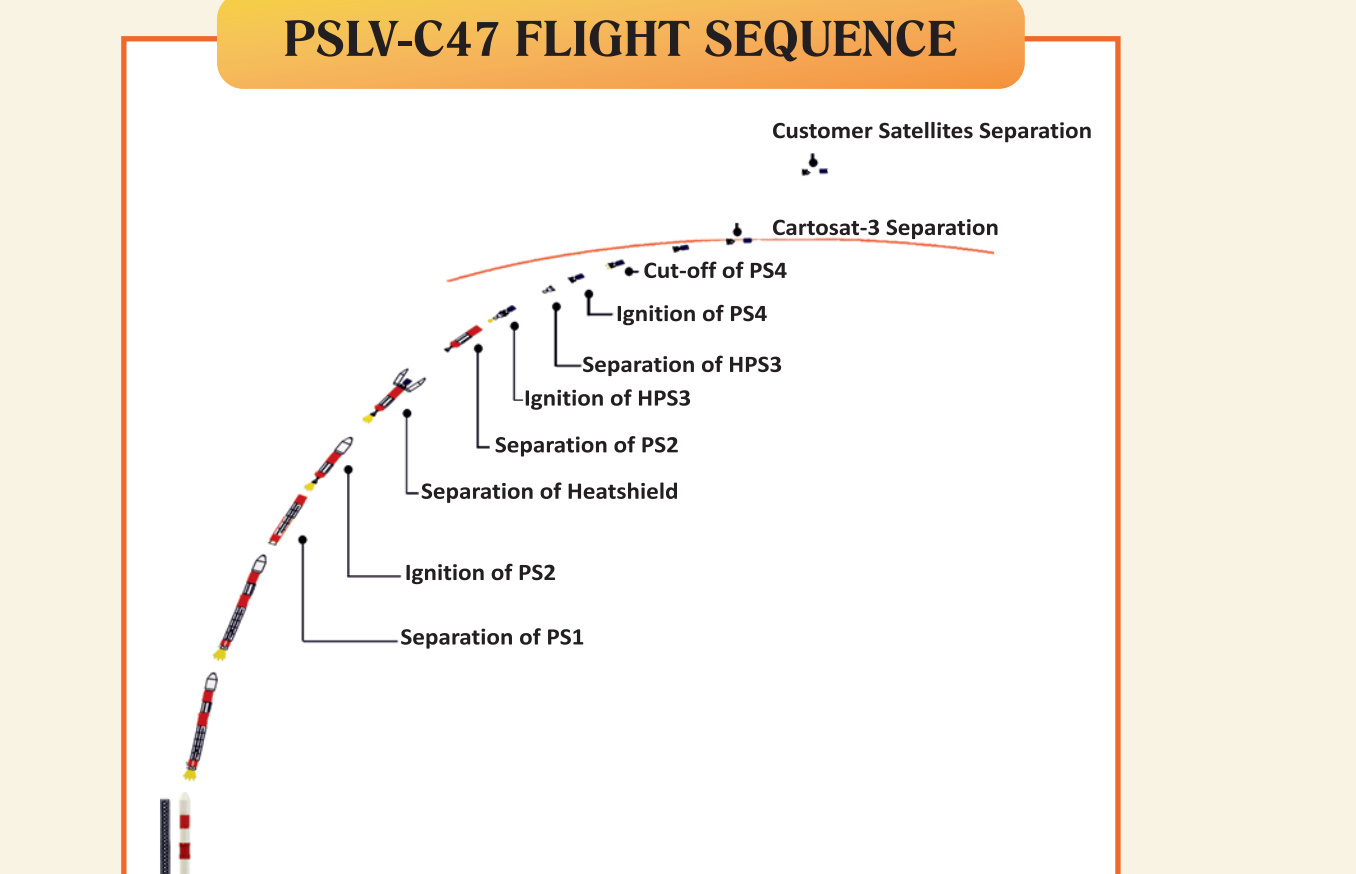 About ten and a half seconds after third stage separation, PSLV’s fourth stage ignited for its only planned burn prior to spacecraft separation. The restartable liquid-fuelled PS4 stage, also known as L-2.5, burns monomethylhydrazine and mixed oxides of nitrogen. It burned for eight minutes and 31.4 seconds, placing Cartosat-3 into a near-circular sun-synchronous orbit. Forty-seven seconds after the burn concludes, at 17 minutes and 42 seconds after liftoff, Cartosat-3 separated from the PS4.

With its primary payload deployed, the PS4 released its secondary payloads. The first CubeSat released forty seconds after Cartosat, with deployments continuing for just under eight and a half minutes – the final spacecraft separate at 26 minutes and 50 seconds mission elapsed time.

Wednesday’s launch was India’s fifth of the year. Four of these launches have used PSLV rockets – including the debut launches of new intermediate PSLV-DL and PSLV-QL configurations offering payload capacities in between those of the previously-existing PSLV-CA and PSLV-XL versions.

The fifth launch was July’s GSLV Mk.III mission which successfully deployed Chandraayan-2 on its mission to attempt a landing on the Moon. Although the landing attempt was ultimately unsuccessful the mission has given ISRO valuable data and experience, with a follow-up now planned to launch next year.

Prior to the Cartosat-3 launch ISRO has two more launches potentially scheduled for December with RISAT-2B radar-imaging satellites, however, hints about possible scheduling of Indian launches are often optimistic, and the upcoming schedule should be clearer once PSLV C47 has completed its mission.