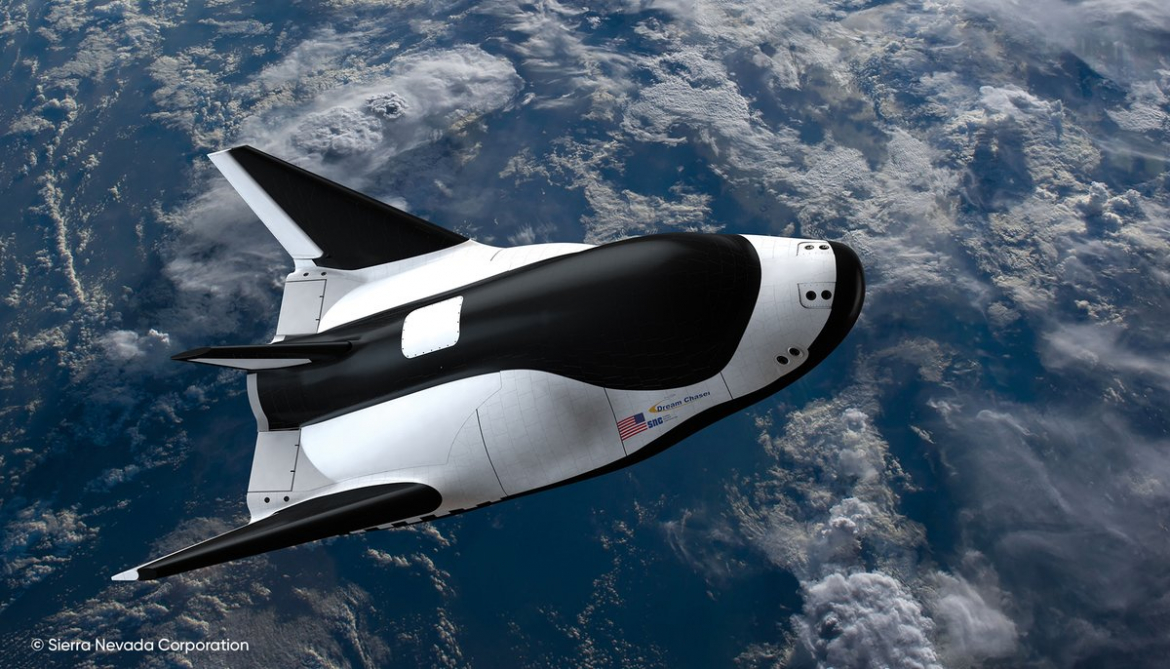 At the Kennedy Space Center’s Space Station Processing Facility, Sierra Nevada Corporation unveiled the name for Dream Chaser’s cargo module element as well as provided an update on the status of the cargo craft as it prepares for its first flight in 2021.

Also discussed at the event were potential other applications for Dream Chaser, including but not limited to a Gateway logistics cargo vehicle, a standalone space station, and a crew transportation vehicle.

The first Dream Chaser flight vehicle is currently undergoing build and outfitting in preparation for its voyage, which will begin with a launch atop a Vulcan-Centaur rocket procured from United Launch Alliance (ULA).

According to Mr. Lindsey, “About a month-and-a-half ago we took delivery of the primary structure of Dream Chaser, the lifting body.  It’s in Colorado right now in our manufacturing facility. And we’re actually in full-blown assembly and integration.

“Once we’re done, we’re going to take this and our first production cargo module, which is in San Diego, up to Plum Brook at the Glenn Research Center and do a full thermal-vac testing.

“We’re going to test the entire stack together to put it through a flight much like it will go through in space and those environments.  Then we’ll ship the whole thing down here a few months before launch.”

Once at the Kennedy Space Center, the flight worthy Dream Chaser will undergo a final round of testing at the Shuttle Landing Facility, SLF, before being taken to the Space Station Processing Facility where it will be loaded with cargo.

After cargo load is complete, the spacecraft will be buttoned up and transferred to Astrotech in Titusville where it will be fueled for launch before being taken to SLC-41 and mated atop the Vulcan-Centaur rocket.

As with the first Dragon and Cygnus test flights, if all on-orbit testing and approach and rendezvous maneuvers go according to plan, including a demonstration of Dream Chaser’s ability to abort its rendezvous to the Station should an issue occur, Dream Chaser will be permitted to approach the ISS for grapple by Canadarm2 and berthing to the Station’s U.S. segment.

As part of Dream Chaser’s overall design, the vehicle itself does not contain the berthing port or solar arrays needed for it to perform its mission.

Instead, those elements are mounted on what had been, before today, referred to as the cargo module – an element of Dream Chaser that now has a dedicated name: Shooting Star.

The name is a nod to the fact that it is the only part of Dream Chaser that is disposable and will burn up in the atmosphere as a streaking ball of fire – just like a shooting star. 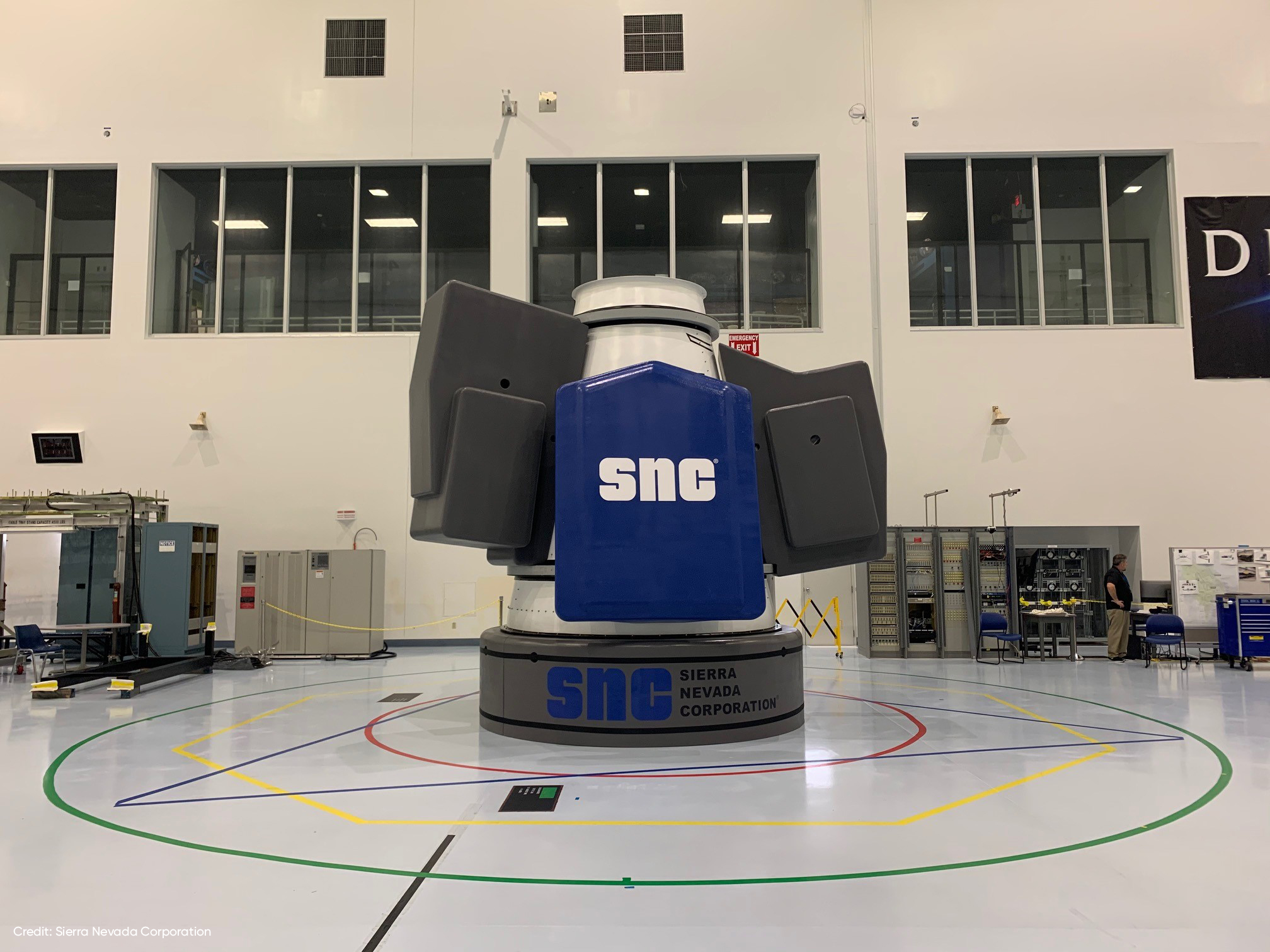 The Shooting Star cargo module of Dream Chaser. The blue panel is where one solar array is mounted. The gray boxes are the maximum volume constraints for external payloads. (Credit: Sierra Nevada)

The module itself, while containing the solar arrays and main propulsion elements for orbital maneuvering, will also be capable of transporting a large amount of internal cargo to the Station.

It is also the part of Dream Chaser on which external cargo can be mounted for delivery and disposal of external elements that are no longer needed for the orbital outpost.

Because the cargo module mounted on the back of Dream Chaser contains the berthing port, Dream Chaser will be the only Station resupply vehicle to berth to the Station aft first.

Once its mission is complete, the Canadarm2 will unberth the vehicle and release it on its way.

Dream Chaser will then re-enter the atmosphere in a nose up, high degree angle of attack to the atmosphere and perform a reentry sequence much like the Space Shuttle did, with large cross range capability and lift to allow it to land as an unpowered glider back at the Kennedy Space Center’s Shuttle Landing Facility.

Upon approach to the runway, Dream Chaser will deploy its aft landing gear and wheels as well as the skid strip, which takes the place of the nose landing gear.

Dream Chaser will first touchdown on its rear wheels before the skid contacts the pavement at the SLF. 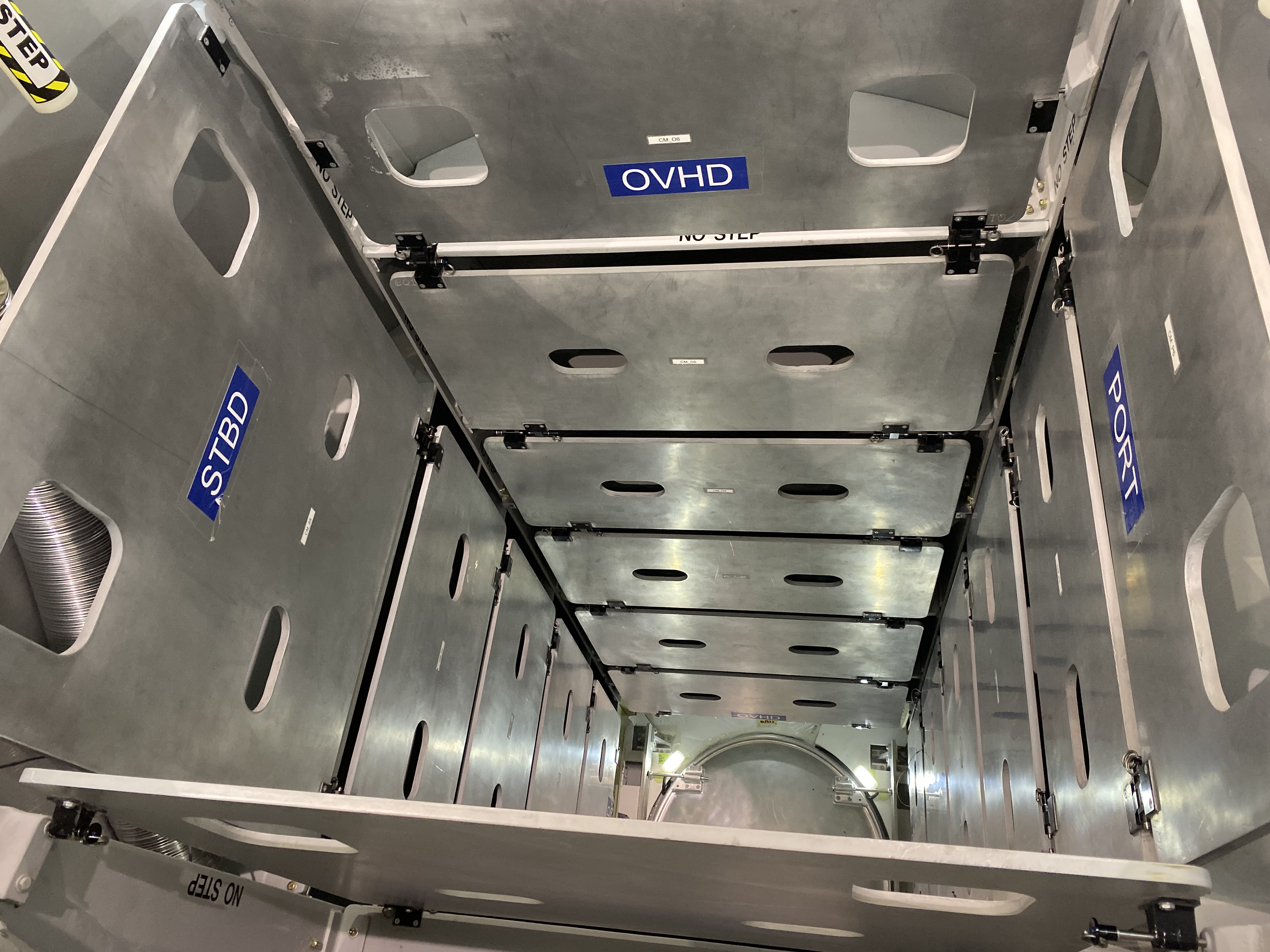 A look inside the Shooting Star test article at the Kennedy Space Center. (Credit: Chris Gebhardt for NSF/L2)

“The skid itself is reusable,” noted Mr. Lindsey.  “It’s made of a very tough material. But the only piece of this skid that isn’t reusable [is the Thermal Protection System tiles].”

As part of Dream Chaser’s design, the bottom of the skid is covered with thermal protection tiles that form the final thermal reentry seal once the craft is all buttoned up for launch.

The tiles are attached to the bottom of the skid, “so when the skid deploys, that bottom part with the TPS hits the runway and shreds the tiles,” related Mr. Lindsey.

At present, NASA has only turned on or activated one of Dream Chaser’s six guaranteed cargo runs to the International Space Station as part of the Commercial Resupply Services 2 contract which runs through 2024.

As Mr. Lindsey related, “We’re anticipating getting turned on for additional missions very quickly.  But frankly the team is focused on the first mission. It’s the most critical for us.”

Other updates on Dream Chaser:

In addition to the updates for Dream Chaser’s role as part of NASA’s commercial cargo transportation services for the International Space Station, Mr. Lindsay also provided updates on the craft’s other potential uses.

While some – like its ability to be a satellite servicing platform, a free-flying space station with an inflatable module docked to its aft, and its ability to carry crew – were not delved into, two elements of Dream Chaser’s potential future were discussed: a servicing vehicle for NASA’s Lunar Gateway and the proposed United Nations scientific research mission. 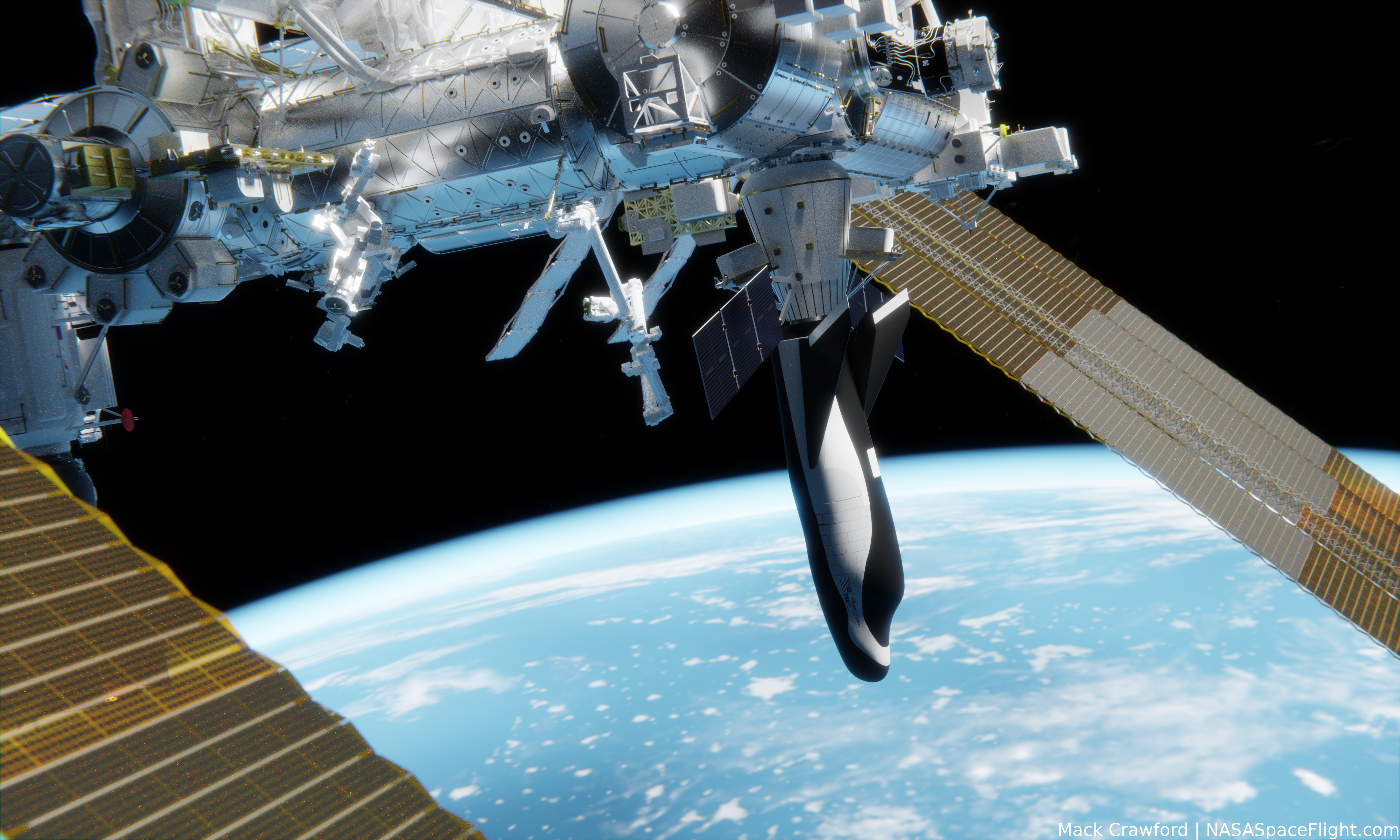 Per the Gateway, Mr. Lindsey noted that the Shooting Star module – while designed for ISS cargo runs – meets all of the requirements for pressurized and unpressurized volumes that NASA is seeking as part of its commercial lunar services transportation contracts.

In that way, the entirety of Dream Chaser is well-designed and suited for cislunar space activities as well as Low Earth Orbit (LEO) initiatives.

For its various LEO opportunities, one of the primary elements of Dream Chaser’s career will likely be with the United Nations.

As previously reported, the United Nations entered into an agreement with Sierra Nevada to potentially use Dream Chaser to give UN member nations that lack access to space the ability to fly experiments aboard the winged space plane.

“For the UN Mission, the idea is that there are a number of nations that don’t have the opportunity to fly in space,” said Mr. Lindsey.

“The Space Station has a certain number of nations involved, but it’s not complete.  So the idea is to provide the opportunity for a nation that’s never been to space to design a payload in cooperation with a nation that has done it before and then fly that payload [on Dream Chaser].”

All told, Dream Chaser can accommodate between 30 and 35 scientific experiments and return to land at any commercial runway long enough to accept a Boeing 737.

This means that the UN Mission would not be required to land in the United States, but could land in South America, Australia, Europe, etc.

Mr. Lindsey noted that at the beginning of the UN initiative no one was certain how many responses would be received or how much of an interest would be present from non-spacefaring UN member nations.

In the end, 150 scientific proposals from 65 or 70 UN member nations were received.

As part of the offering for the United Nations mission, Dream Chaser is not only capable of landing on any commercial runway long enough to accept a Boeing 737, but is also capable of launching on a multitude of international rockets, not just the Vulcan-Centaur from United Launch Alliance.

In this manner, the UN Dream Chaser mission could launch on a Russian Soyuz or an Arianespace/European Space Agency Ariane 5/6 rocket or a Japanese lifter.