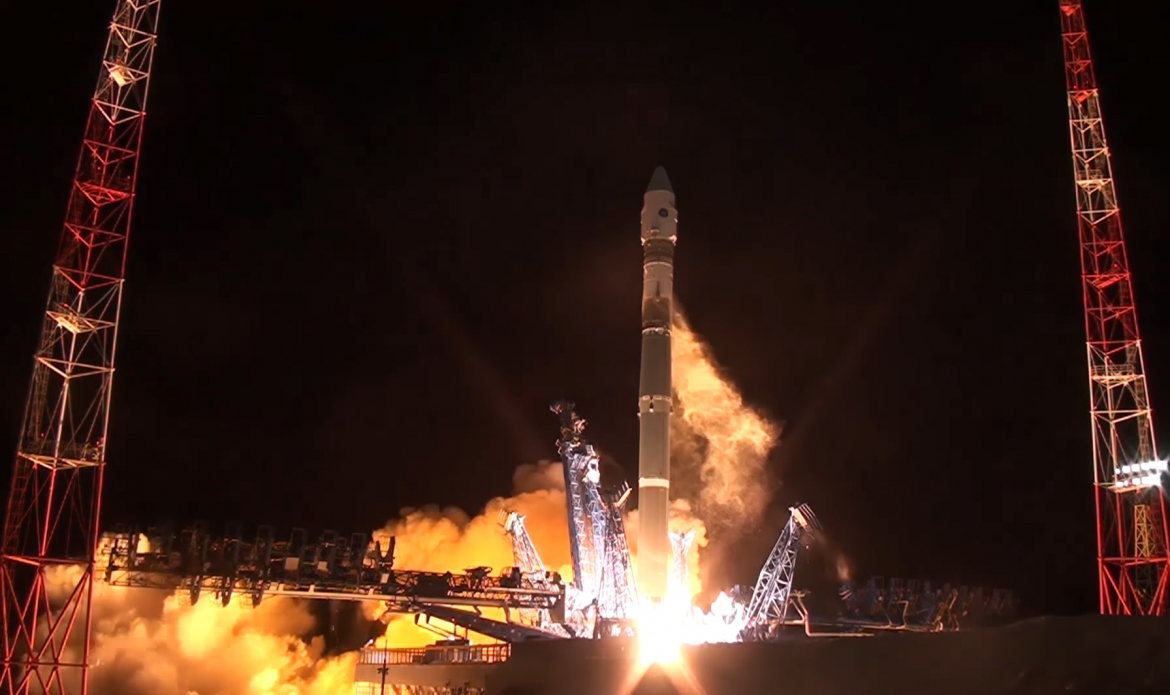 Russia’s Soyuz-2.1v rocket launched from the Plesetsk Cosmodrome in the north of the country on Monday. However, the payload involved is currently a mystery. The military launch lofted off at 17:52 UTC and – per usual mission profiles for this class of rocket – it took around four hours until deployment, at which time Russian officials didn’t provide details on the satellite in question.

It is not unusual for Russia to keep the identity of its military payloads a secret, with this latest mission no exception.

Upon launch confirmation, the only official line was that the mission involved a “spacecraft designed in the interests of the Russian Defense Ministry”.

Speculation points to this launch involving NPO Lavochkin’s 14F150 nr. 2, which is the same class of payload as Kosmos-2519, which was launched on the third flight of the Soyuz 2-1v/Volga.

Should Monday’s launch involve 14F150 no. 2, it may be carrying additional sub-sats along for the ride, as has been the case with previous launches.

How many details Russian officials will disseminate will first depend on a successful mission. However, following the declaration of success, no additional details were provided.

The launch is using a Soyuz-2-1v rocket with a Volga upper stage. This is a three-stage vehicle derived from the workhorse Soyuz family of rockets but optimized to carry smaller payloads. Soyuz-2-1v is based on the larger Soyuz-2-1b, but without the four boosters that make up the first stage of the classic Soyuz design.

The Soyuz-2-1b’s first stage is, therefore, the heavily modified version of Soyuz-2-1b’s second stage with its RD-108A engine replaced with a higher-thrust NK-33. The second stage is a Blok-I, the third of the Soyuz-2-1b, while the optional Volga third stage is used to ensure precise delivery of the rocket’s payload into its target orbit, or several different orbits if required.

The Soyuz 2-1b and 2-1v, along with the Soyuz-2-1a, make up the latest generation of a family of rockets that have served Russia, and formerly the Soviet Union, since the dawn of the space age. Soyuz traces its lineage back to Sergei Korolev’s R-7 missile, which in 1957 became the first intercontinental ballistic missile (ICBM) to fly. R-7 had a brief career as a missile, its liquid propellants and the resulting need to fuel the rocket immediately before launch quickly rendering it obsolete as new storable-propellant missiles were developed, however it found its niche delivering satellites to orbit. 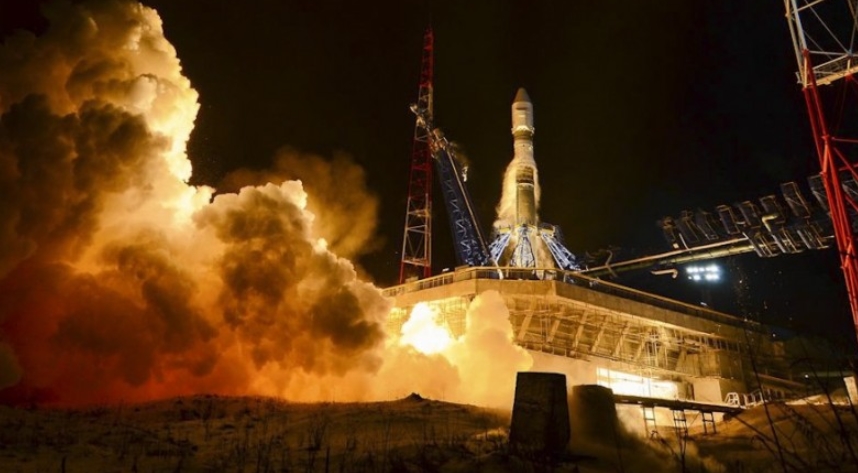 Soyuz 2-1v on a previous launch

A modified version of the R-7 had been used in October 1957 to launch Sputnik, the world’s first satellite, followed by Sputnik 2 with the dog Laika the following month. Later derivatives, with names including Vostok, Voskhod and Molniya launched the first humans into space, carried early probes to the Moon and deployed early scientific, reconnaissance and communications satellites.

Soyuz was an evolution of the Voskhod rocket, which had to be upgraded to accommodate the new Soyuz spacecraft which was designed to carry three cosmonauts to space stations in low Earth orbit. Its first flight came on 28 November 1966.

Initial Soyuz launches were dedicated to the Soviet human spaceflight program, with a few modified versions used to deploy a small number of reconnaissance satellites. The introduction of the Soyuz-U in 1973 changed this: the new rocket was intended as a replacement for the earlier Soyuz and also Voskhod, which at that time was still carrying out most military launches. Soyuz-U took over both crewed and uncrewed launches, and by its retirement in 2017 it had flown over 750 times, a record for any orbital carrier rocket.

The Soyuz-2 updated the Soyuz design for the twenty-first century, with digital flight control systems and upgraded engines among the enhancements. Soyuz-2-1a, the least-changed version, made its debut in 2004 with a suborbital test flight, before conducting its first orbital launch in October 2006.

Two months later the Soyuz-2-1b first flew, incorporating further modifications to the rocket’s third stage, with a new RD-0124 engine in place of the earlier RD-0110. Soyuz-2-1v was introduced in 2013 to carry smaller payloads, replacing earlier rockets in this role such as the Tsyklon, Dnepr and Kosmos-3M that were being phased out.

Wednesday’s launch was the sixth flight of the Soyuz-2-1v, and the fifth time it has flown with the Volga upper stage. The launch began at Site 43/4 of the Plesetsk Cosmodrome, which is shared by Soyuz-2-1v and its larger brethren. Site 43/4 is the same launch pad that has been used for all of the Soyuz-2-1v’s previous missions.

Both the first and second stages of Soyuz-2-1v burn RG-1 propellant, Russian rocket-grade kerosene, which is oxidized by liquid oxygen. The first stage’s NK-33 engine is one of a number originally built for the Soviet lunar program in the late 1960s and put into storage after that project’s cancellation. NK-33 was to have powered the second stage of N-1F, an operational version of the N-1 rocket which was tested between 1969 and 1972. N-1 was abandoned after the Soviets failed to get to the moon before the United States, having failed during first-stage flight on all four unmanned test missions.

Several projects were proposed to use the stockpile of leftover engines, with two – Soyuz-2-1v and the US Antares rocket – making it to the launch pad, although Antares has since switched to RD-181 engines. Russia intends to re-engine Soyuz-2-1v with the RD-193 when the stock of refurbished NK-33s has been expended. 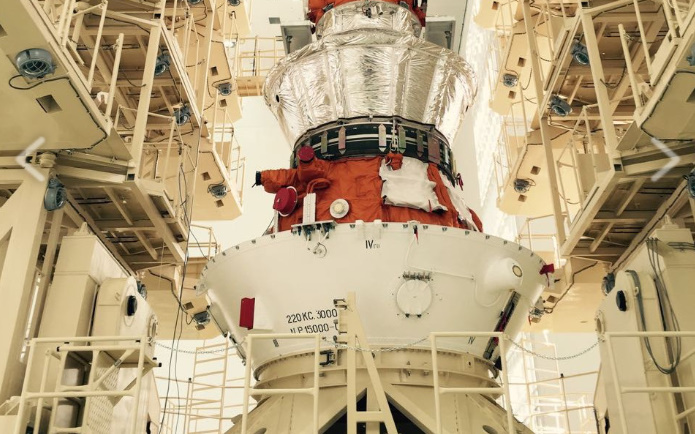 Once the second stage had consumed its propellant and shut down, Volga separated to begin its role in the mission. Developed from the propulsion module of the Soviet-era Yantar reconnaissance satellites, Volga was powered by an 17D64 engine, which burned unsymmetrical dimethylhydrazine and dinitrogen tetroxide. Designed to be restarted multiple times, Volga would have made several burns during Wednesday’s mission before deploying the four payloads into their pre-planned orbits. 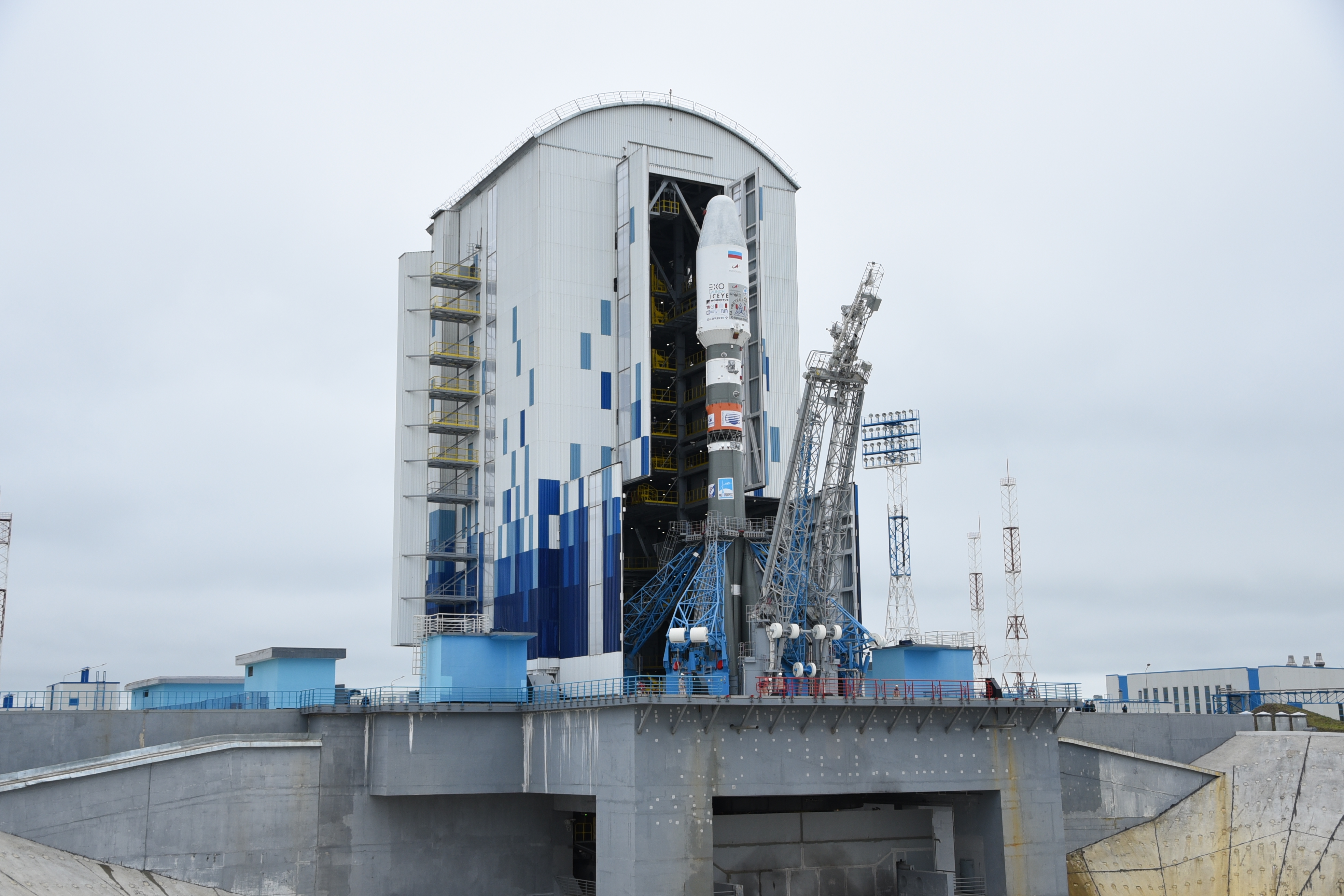 Soyuz 2-1B waits for its upcoming launch – via Roscosmos

Russia’s next launch is expected to be the launch of the Progress MS-13 cargo resupply mission to the ISS, although that has been delayed from December 1 to December 6 due to a cable issue found during pre-launch preparations.