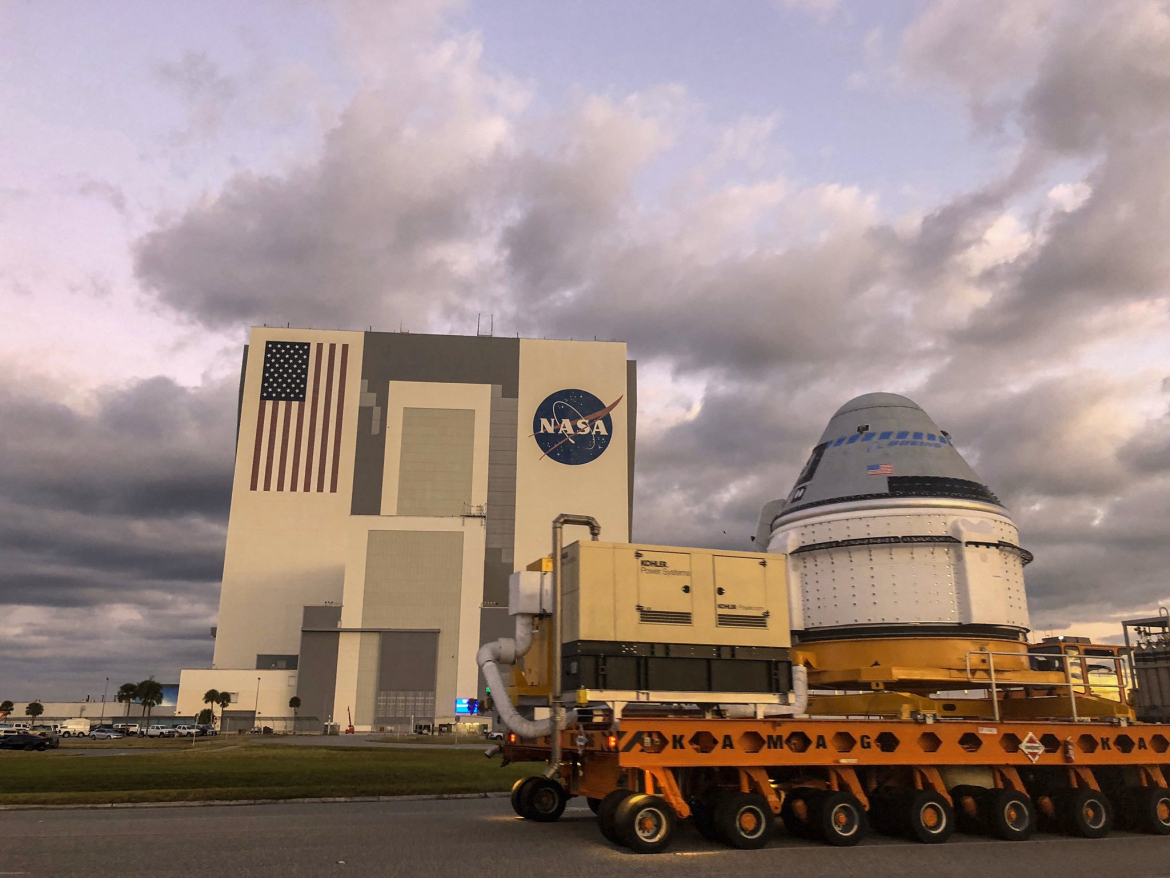 The first Starliner crew vehicle from Boeing has arrived at SLC-41 at the Cape Canaveral Air Force Station for stacking operations with its Atlas V rocket.  Starliner rolled out of the Commercial Crew and Cargo Processing Facility (C3PF) at the Kennedy Space Center earlier this morning for the multi-mile trip to the pad.

The event marks a significant milestone for Starliner ahead of its inaugural flight No Earlier Than (NET) 17 December 2019; however, much testing still remains for the vehicle and its launcher as well as a series of critical Flight Readiness Reviews with NASA before the vehicle will be cleared to launch to the International Space Station.

The rollout of Starliner ostensibly caps an extremely busy three week period for the Boeing Starliner teams that not only saw them complete the Pad Abort Test in New Mexico but also perform Starliner fueling operations for flight for the very first time inside the C3PF.

The fueling process provided the teams with valuable “first time” knowledge that will be applied to future missions.

According to Boeing, from a technical standpoint, the teams can still meet that NET 17 December launch date.

#Starliner has arrived at the Vertical Integration Facility where #AtlasV stands ready to receive its precious cargo this morning. The rocket and spacecraft are scheduled to launch Dec. 17 to the @Space_Station. pic.twitter.com/dxjxLc1Qdn

While this particular Starliner will not carry crew on its Orbital Flight Test (OFT), the mission will perform an uncrewed test to the International Space Station to verify all of the Atlas V and Starliner systems in a flight that will provide NASA with critical data to allow the agency to certify the Boeing spacecraft and the ULA rocket to carry crew beginning as early as next year.

Exactly when that first crewed flight of Starliner will take place is currently unknown.

At the October NASA Advisory Council meetings, Commercial Crew Program Manager Kathy Lueders noted that Boeing was on track from a technical readiness standpoint for the Crewed Test Flight in “early 2020.”

However, an Office of the Inspector General (OIG) report last week noted there is still a large amount of work to be completed by the Commercial Crew Program and that crewed flights of both Starliner and Dragon were more realistically NET mid-2020.

It should be noted that both NASA and Boeing expressed severe disagreement with numerous facets of that OIG report.

Nevertheless, today’s major milestone for Starliner marks the end of one busy period and the commencement of the next.

Starliner will now be lifted and mated to the top of the Atlas V rocket, the first step in a now-long series of integration and checkout campaigns between the rocket and the spacecraft.

Not only is this Starliner’s first mission, but this is also the first time the Atlas V rocket will be used to launch something other than a payload enclosed within a payload fairing. 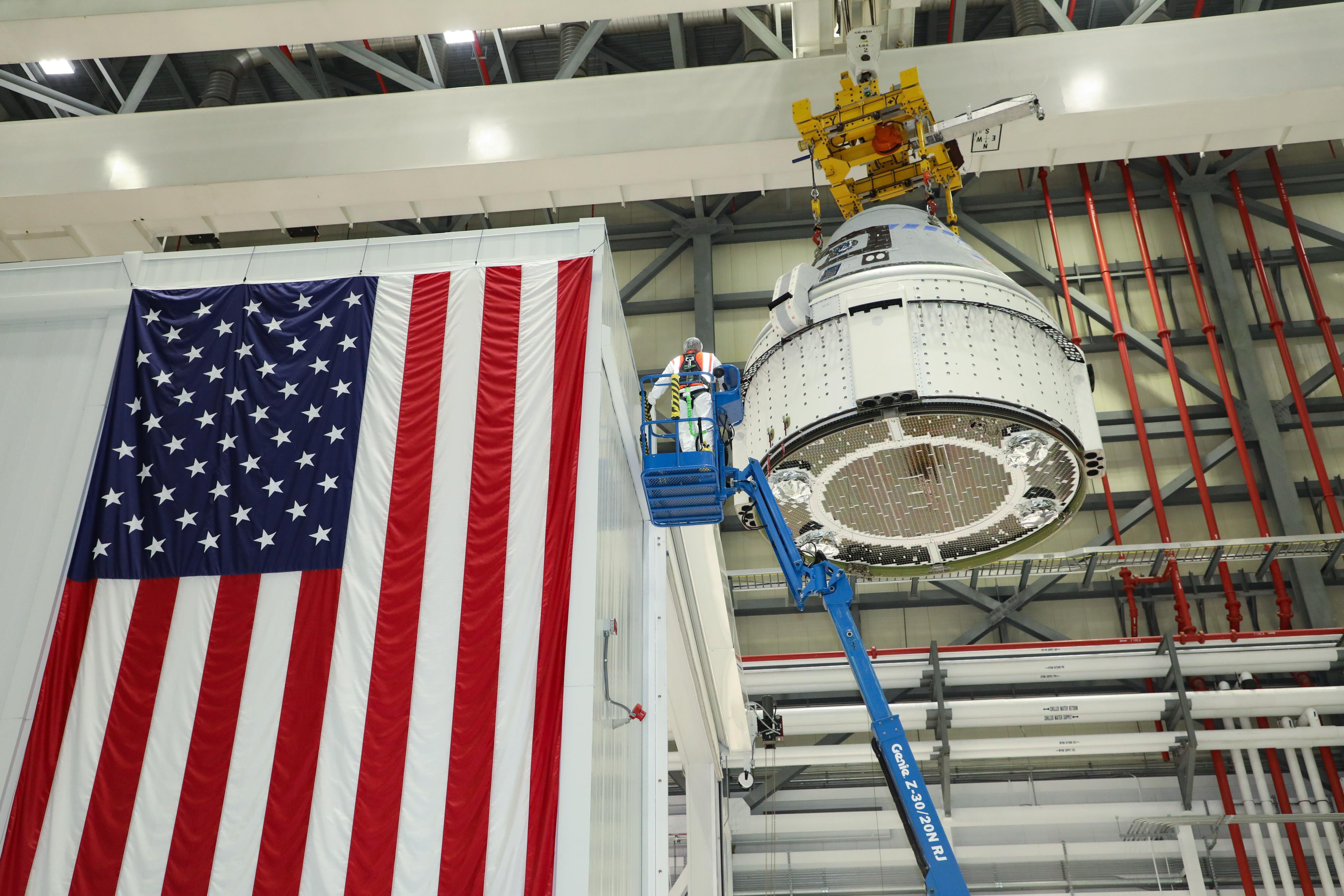 The OFT Starliner is lifted off its test stand in the C3PF and moved to its ground transportation truck for the trip to the launch pad. (Credit: Boeing).

Unlike traditional missions, the Atlas V rocket for Starliner will fly without a payload fairing.  It will also be augmented by two side-mounted solid rocket motors and will be equipped with a Dual Engine Centaur upper stage.

The unique Atlas V configuration is known as the N22 and will also see the rocket fly for the first time with the addition of an aeroskirt that will be mounted below Starliner’s Service Module.

The aeroskirt is necessary due to Starliner’s overall size being greater in diameter than the diameter of the Centaur upper stage.

This size differential would have created unstable aerodynamic flow across the Atlas V rocket during launch.  The addition of an aeroskirt mitigates the problem.

Despite statements to the contrary, this is not the first time the Dual Engine Centaur (DEC) upper stage will fly.

What’s more, while this is the first flight of a DEC in its Common Centaur configuration, the Common Centaur has flown 80 times already in a single engine model.

None of the primary systems – including the engines or the pressurization tanks – are different from the single engine to the dual engine Common Centaur model.

This means that the necessary flight data to certify the Common Centaur to carry humans has already been obtained and reviewed by both NASA and United Launch Alliance from the 80 single engine configuration flights.

When Starliner does liftoff, the Atlas V rocket and DEC upper stage will deliver it into an initial sub-orbital trajectory with an orbital apogee of 181 km and a perigee inside Earth’s atmosphere.

This launch profile is very similar to that utilized by the Space Shuttle fleet over the course of its 30-year career.

Just like the Space Shuttle, the Starliner itself will finish the orbital insertion part of its launch phase using its OMAC (Orbital Maneuvering and Attitude Control) thrusters once it separates from the top of the Centaur.

The delivery of Starliner into a sub-orbital trajectory comes largely from the fact that the Atlas V booster has to throttle down significantly during first stage flight to maintain 3g acceleration limits for the crew that will ride aboard the capsule.

This reduces the overall performance capability of the Atlas V in terms of the amount of mass it can deliver to Low Earth Orbit.

Additionally, the Atlas V and Centaur must also fly a trajectory during the launch phase that enables Starliner to safely abort from the top of the rocket at any phase of flight.

These two safety considerations combined result in an optimal launch insertion of Starliner into a sub-orbital trajectory by the ULA launcher.

What largely remains to be seen is – if NASA decides to delay the 17 December launch for more discussion/analysis – how long the launch could slip before Starliner and Atlas V would need to be destacked for ULA’s next mission in February.

That mission is a flagship European Space Agency/NASA flight of the Solar Orbiter that must launch within a 19-day Venus interplanetary launch window that opens on 5 February.

If Solar Orbiter misses this window, it would have to be delayed nearly 10 months into Fall 2020.

Given the ULA processes for Atlas V stacking, Wet Dress and/or Mission Dress Rehearsal for such critical interplanetary missions, it is likely that Starliner’s window for OFT is quite short – with ULA needing to start stacking the Solar Orbiter Atlas V rocket in early-January.