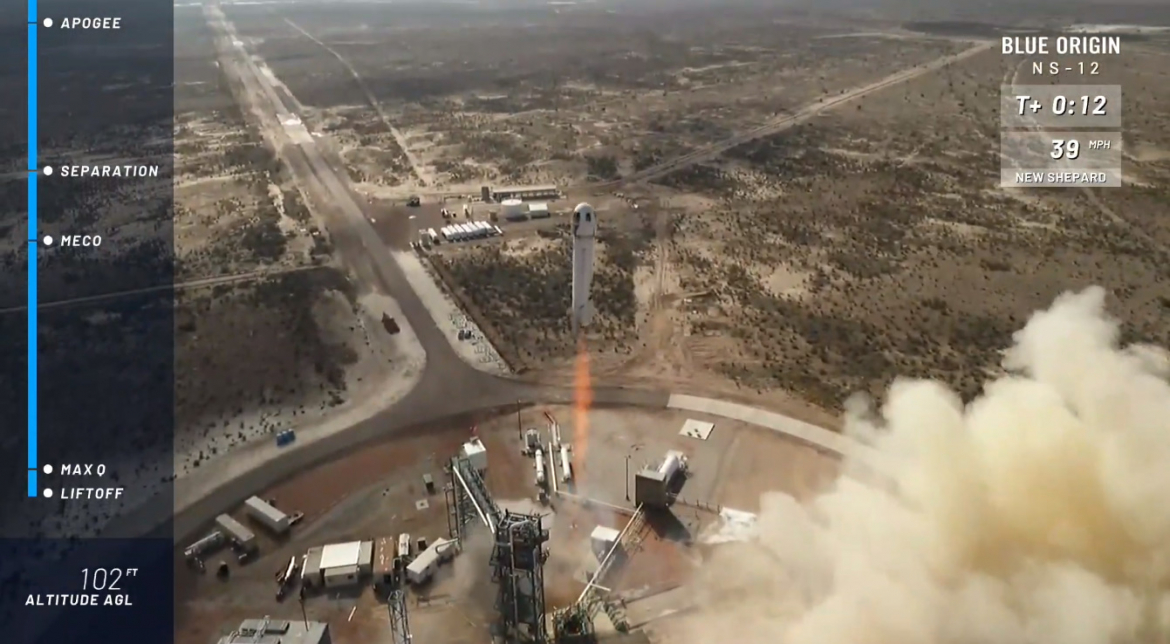 Blue Origin launched its suborbital New Shepard rocket and crew capsule on an uncrewed test flight from the company’s launch and landing facility in West Texas. The launch, with multiple scientific payloads serving as the passengers for the mission, moved to Wednesday, following poor weather forecasts for the opening launch attempt on Tuesday. The flight was successful.

This was the 12th total test flight of the New Shepard launch system, and the 3rd such flight in the year 2019.

New Shepard is the first in a line of vehicles that Blue Origin will potentially operate. The booster and capsule were built to serve the suborbital space tourism market, which allows paying customers to experience a few minutes of zero-G flight before safely returning to Earth via a parachute-assisted landing.

The New Shepard test program is meant to ensure the reliability and safety of the vehicle, with multiple flights being conducted on the three New Shepard rockets that have flown so far.

The first New Shepard flight took place in April 2015, with a successful launch to an altitude of 307,000 feet (93.5 kilometers) – just below the Kármán line, which is the internationally recognized point where space begins – and a safe return of the Crew Module to the surface.

However, the first New Shepard booster, powered by a Blue Origin-produced BE-3 engine and designed to be reusable, was not recovered due to a loss of pressure event in the rocket’s hydraulic system.

The second test flight took place seven months after the first, with the second New Shepard booster lofting its Crew Module to an altitude of 329,839 feet (100.5 kilometers) before touching down in the West Texas desert via a retropropulsive landing – marking the first time that a suborbital rocket successfully landed after conducting such a flight. 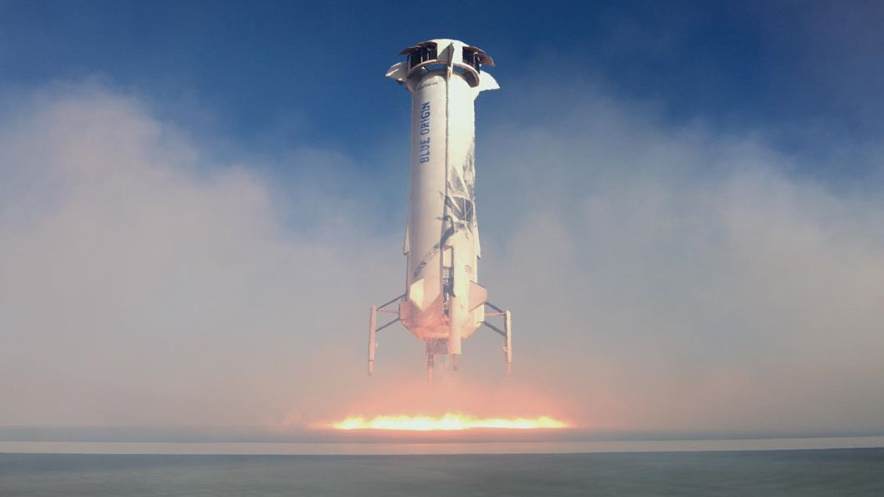 NS-11 touching down after its launch earlier this year – photo: Blue Origin

That particular booster (New Shepard-2 or NS-2) would be reused and reflown four more times, culminating in a successful in-flight abort test of the Crew Module and the unexpected survival and landing of the booster in October 2016.

Following the retirement of New Shepard-2, a new rocket and Crew Module (christened Crew Capsule 2.0) was built in order to closely resemble the spacecraft that will launch human passengers. This booster and capsule had successfully flown five times before this launch since its first launch in December 2017, with numerous commercial and NASA payloads flying onboard for each mission.

This mission marked the 6th flight for the New Shepard-3 vehicle, and the 9th commercial payload mission launched by Blue Origin.

New Shepard’s payloads were secured inside the Crew Module, where they are exposed to both the stresses of launch and about two minutes of microgravity before the capsule falls back toward the surface of Earth.

This mission carried several payloads along for the ride to the Kármán line, with two of them being procured from NASA’s Flight Opportunities program.

We can grow plants in space, but scientists are still learning how they adapt in order to thrive there, & what that could mean for other organisms—like humans! Dec 10, a NASA-supported experiment will launch on a @BlueOrigin rocket to uncover more clues.
https://t.co/GMms1y3DBR pic.twitter.com/WXcwI9YRug

One of these payloads comes from the University of Florida in Gainesville, Florida, with the intention of imaging and analyzing Arabidopsis thaliana plants and studying possible changes in their genes during their travel to space and back.

This experiment will assist researchers in understanding the impact of space travel on humans and other organisms, what biological processes plants undergo in microgravity, and what allows these plants to adapt to spaceflight.

Another such NASA-procured payload is the Orbital Syngas Commodity Augmentation Reactor (OSCAR), having been developed by researchers at the Kennedy Space Center in Florida.

The project aims to help manage waste in space – such as food packaging, human waste, and old clothing – and transform it using oxidation and steam reforming into useful resources, such as water and gases including hydrogen, carbon monoxide, and methane.

OSCAR’s launch on New Shepard will enable scientists to add to data acquired from previous lab tests and evaluate the performance of the instrument’s reactor. Waste stimulants will be used for this suborbital flight.

Also on the vehicle are several student art experiments as part of a collaboration with the rock band OK Go, along with thousands of postcards from students around the world. According to Blue Origin, this mission will help inspire future generations of children to pursue careers in STEM and help visualize the future of space travel.

This mission is expected to be one of the last uncrewed flights scheduled to occur before Blue Origin gets ready to fly human passengers on the New Shepard vehicle, with the first crewed launch most likely occurring sometime next year.

Booster touchdown! Got to love how this one lands. pic.twitter.com/PC3r7tcleK

While Blue Origin has not begun selling any tickets for seats on these first crewed flights, the company is set to charge in the hundreds of thousands of dollars for these initial tickets, per unconfirmed media reports over recent years.

Meanwhile, Blue Origin has also ramped up work on their orbital New Glenn rocket facilities at Launch Complexes 36 and 11 in Cape Canaveral, Florida, which will host launches and tests of rocket components.

The water tower and horizontal integration facility at the #BlueOrigin launch pad is really coming together. pic.twitter.com/I86xugRuln

Observers in and around the Cape area have noted the progress on construction of the Horizontal Integration Facility (HIF) that will house New Glenn rockets before flight, along with the launch pad and water tower.

Construction work has also been ongoing at Blue Origin’s New Glenn factory at Exploration Park, where the first and second stages of the large rocket – along with the 7-meter diameter payload fairings – will be produced.

Oooh, lots of footage of New Glenn, BE-4 and HQ facilities. pic.twitter.com/reM9C9799s

Currently, the maiden flight of the New Glenn launcher is scheduled to occur no earlier than 2021.

For Mars colonization, new water map may hold key of where to land