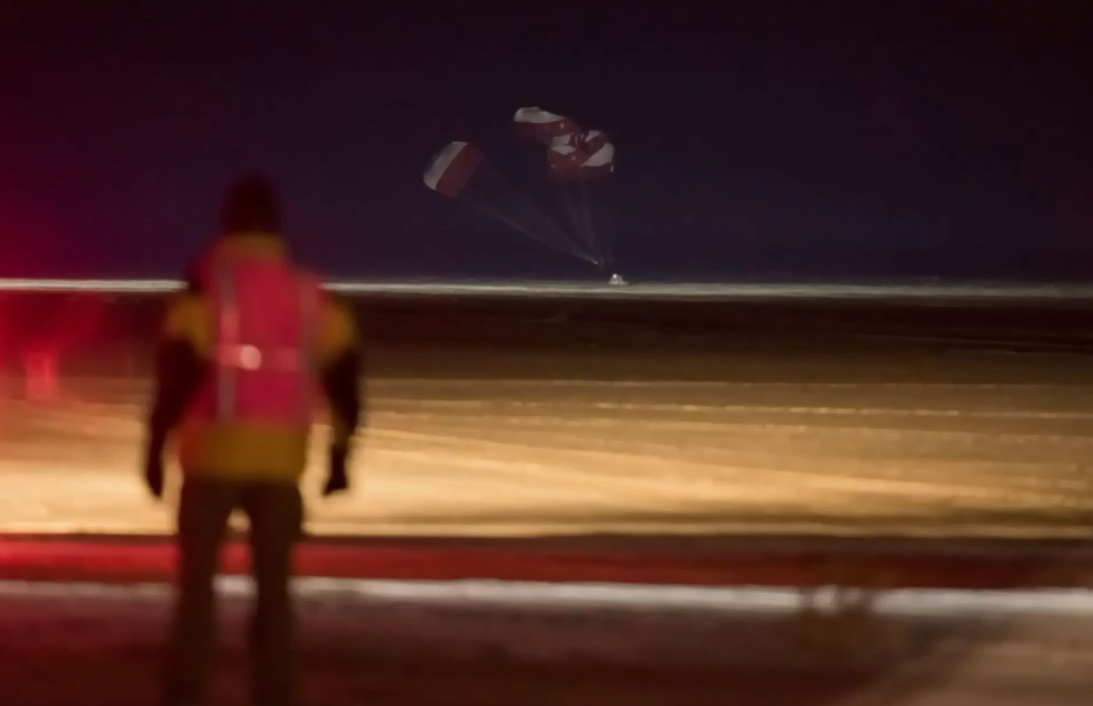 After a maiden flight that was shortened by an off-nominal orbit insertion, Boeing’s CST-100 Starliner conducted its first landing from orbit. Touchdown at the White Sands Missile Range in New Mexico occurred at 5:58 AM MST (12:58 UTC) on December 22.

The spacecraft approached from the southwest, overflying the Pacific Ocean and Baja California.

If, at any point leading up to the deorbit burn, NASA or Boeing teams felt the need to reevaluate landing options, there was a backup landing opportunity at 1:48 PM MST (20:48 UTC). Had this backup attempt is utilized, the spacecraft would have approached from the northwest. However, the first opportunity was taken.

After nominally separating from the rocket, Starliner’s MET indicated that the spacecraft was at a point in the mission profile different than its actual location. This disagreement resulted in the orbit insertion (OI) burn, which moves Starliner into a stable orbit, not occurring on time.

Additionally, Starliner and its antennae were not oriented properly, again due to the MET error. This created a challenge for ground controllers attempting to command the OI burn, as establishing a data link between NASA’s Tracking and Data Relay Satellites (TDRS) and Starliner was delayed.

Once a positive command link was established, ground controllers commanded the spacecraft to conduct two burns in order to reach a circular 250 kilometer orbit.

While this orbit was stable, it was lower than the International Space Station’s altitude. After reaching a stable orbit, NASA and Boeing evaluated the possibility of maneuvering to the station, but concluded that an insufficient amount of fuel remained on board Starliner to conduct an approach. Starliner burned a significant amount of propellant while maneuvering to a stable orbit and maintaining the incorrect orientation after launch.

Recovery teams were deployed to White Sands immediately after this decision was made, in order to prepare the site for an early landing.

Starliner’s early return meant that a major set of test objectives remained incomplete at the conclusion of the OFT mission, as the vehicle never conducted a rendezvous, docking, and undocking from the space station. NASA and Boeing have, however, worked to accomplish as many objectives as possible.

Another major milestone was testing of Starliner’s Guidance, Navigation, and Control (GNC) systems. This included successfully using the VESTA star tracking system for navigation. Also successfully established was a command link from ground controllers through the International Space Station to the Starliner spacecraft.

While Starliner did not execute a rendezvous and docking as planned due to depleted propellant levels, the spacecraft’s docking system was successfully extended and retracted in orbit.

Starliner maintained good propellant margins for deorbit and reentry, and controllers resolved the MET issue to ensure that all following mission events occur on schedule.

The Entry, Descent, and Landing (EDL) sequence began at 5:20 AM MST (12:20 UTC) when Starliner’s RCS and orbital maneuvering thrusters conducted the deorbit burn. This is followed five minutes later by the separation of the service module from the crew module ahead of reentry.

Starliner’s heat shield expected to experience very similar temperatures and forces as a normal reentry from the ISS. Controllers chose Starliner’s orbit largely to preserve the option to return to White Sands using a similar approach profile to the original landing plan.

White Sands is one of four facilities that can support Starliner landings, the others being Dugway Proving Ground in Utah, Wilcox Playa in Arizona, and Edwards Air Force Base in California.

Recovery crew tour! @StarCommJosh with a really cool overview of the vehicles. It's like a mini-Shuttle recovery convoy!

After reentry, Starliner deployed three main parachutes to slow its descent. The crew module’s heat shield was jettisoned to allow six airbags to deploy and cushion the capsule’s landing. The capsule touched down in the desert of White Sands Missile Range for recovery and preparation for its next mission.

Prior to the MET anomaly, the capsule was planned to fly again on the first post-certification mission for Starliner. Neither NASA nor Boeing has yet indicated any change of plans in this regard.

With NASA and Boeing continuing to investigate the root cause of the MET anomaly, a decision on whether a second uncrewed test flight will be necessary is also pending.

Conducting an uncrewed rendezvous and docking prior to flying crew is not a requirement for NASA’s Commercial Crew program.