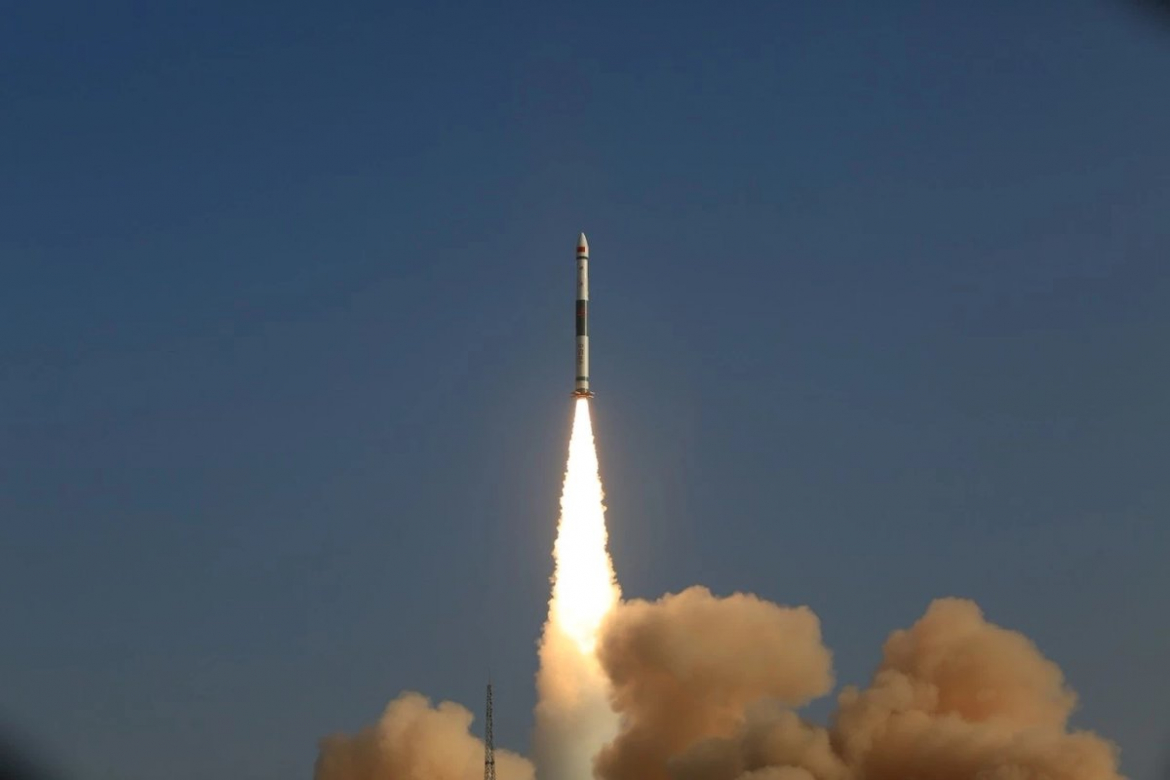 Also designated GS-SparkSat-03, the 227 kg Yinhe-1 satellite will be operated by GalaxySpace, a Beijing-based communications satellite producer. This Chinese company was founded in 2016 with the aim to mass produce low-cost, high-performance small satellite through agile and fast-iterative development mode, and to build the world’s leading LEO broadband satellite constellation with a global coverage with 5G communication network. The satellite provides a communication bandwidth of 10Gbps. 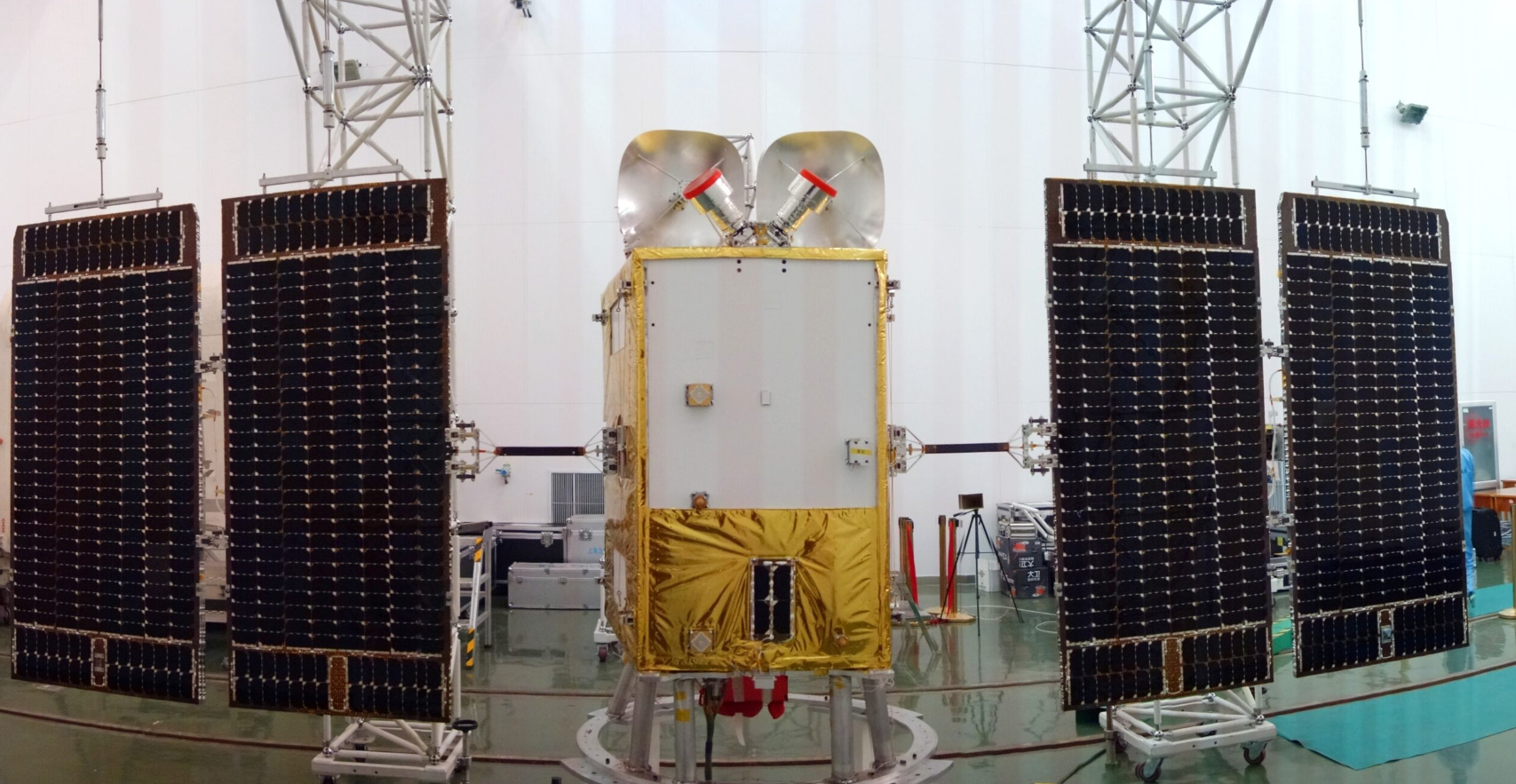 The mission is to improve the network connection condition of all regions and individuals, and to provide cost-effective, efficient and convenient broadband networks and services, while providing more accessible knowledge, more equal and extensive information, simpler and convenient communication and more development opportunities for everyone.

The company’s core team consists of senior experts from the Internet, aerospace industry and scientific research institutions. With the strength of satellite technology research and development capabilities as the basis, and combining with Internet Thinking, GalaxySpace can provide users with quality Internet service and experience.

The low-cost and high-performance small communication satellites developed by Galaxy Space, have the characteristics of modular components, lighter weight structure, and intelligent and mass manufacturing. When the Galaxy constellation satellite approaches the end of its service time, the satellite will automatically perform maneuvers and then burn out in the atmosphere.

The constellation will consist of up to 1,000 communication satellites deployed on 500 km-1000 km Low Earth Orbits, seamlessly expanding the terrestrial communication networks, covering all regions of lands, oceans and sky. Aligning with 5G standards, the constellation will allow users to access 5G networks with high speed and flexibility, using small, intelligent, low-cost satellite user terminals that are suitable for use in schools, homes, automobiles, aircrafts and many other scenarios.

The small, intelligent, and low-cost satellite user terminal, working with the satellite communication system, provides an economical, practical, stable and convenient network, allowing users to access the Internet at high speed efficiently. The user terminal is easy to install and use, and can be customized and equipped with solar self-powered expansion modules and AI voice control optionally.

The services provided by GalaxySpace will help in infrastructure construction in remote rural areas of both developed countries and developing countries. Due to dispersed population distribution, some working, living, educational or medical establishments have no or unstable access to terrestrial network. Quick and convenient access to satellite network solves those problems effectively, which brings more opportunities and security.

The service is based on a stable, safe and fast dedicated satellite communication network for the sites which have no access to terrestrial communication networks, including business outlets, R&D bases, production sites, institutions, checkpoints, observatories, and other facilities with massive data-uploading demand. It will provide satellite constellation and overall dedicated satellite network solutions to enterprise and government customers all over the world.

The new Galaxy satellite constellation will provide swift and timely network deployment or long-term access solutions to cope with regional disasters and temporary communications needs. It will help telecom operators to connect their terrestrial base stations in isolated or remote areas and the satellite user terminal can satisfy network access demand in scientific investigation, exploration and other activities in extreme and severe environments.

Via Galaxy satellite constellation, status and information of global scale IoT networks can be accessed, monitored, transmitted and shared in a real-time, seamless and secure way.

Like previous Kuaizhou-1A launches, the orbiting of YInhe-1 was managed by Expace. Expace Technology Co., Ltd., a subsidiary of China Aerospace Science & Industry Corp, it is specialized in R&D, manufacturing and marketing of the Kuaizhou series launch vehicle to provide cost-effective, reliable and accurate commercial launch service for customers all over the world. 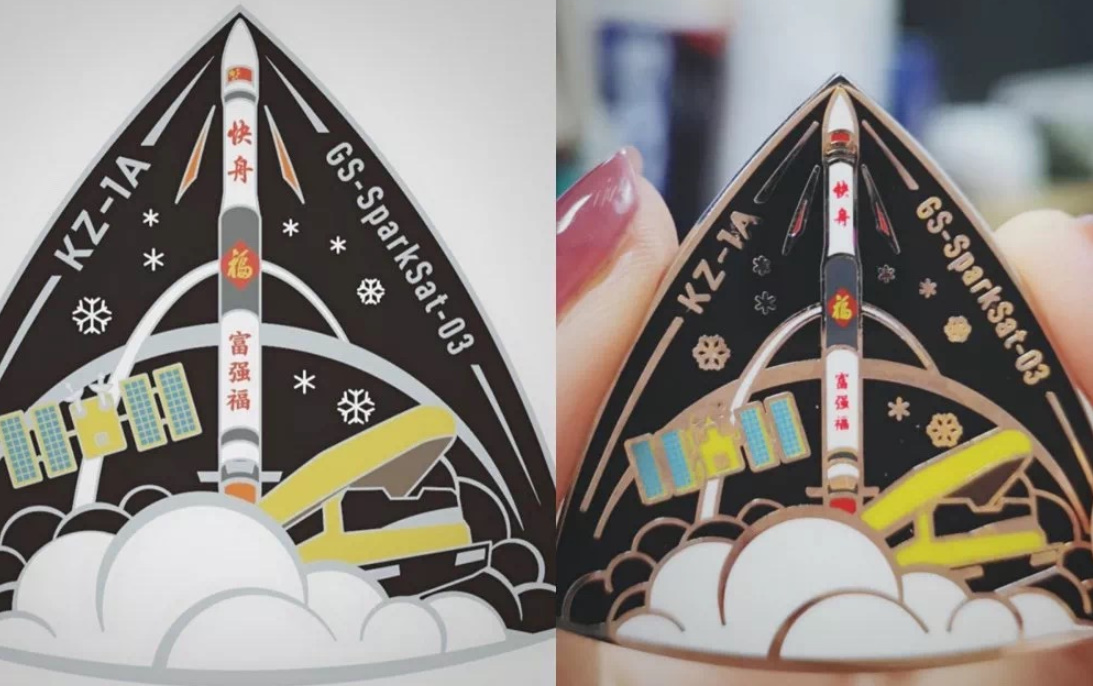 The launch vehicle can send a 200kg payload into a 700km sun-synchronous orbit. It mainly offers the service of sending a small satellite into Low Earth Orbit (LEO) to domestic and international customers.

The vehicle is possible based on the road-mobile DF-21 missile adding two additional upper stages. There are no apparent differences between the KZ-1A (previous commercially available as the FT-1 Feitian-1) and the KZ-1 launch vehicle. 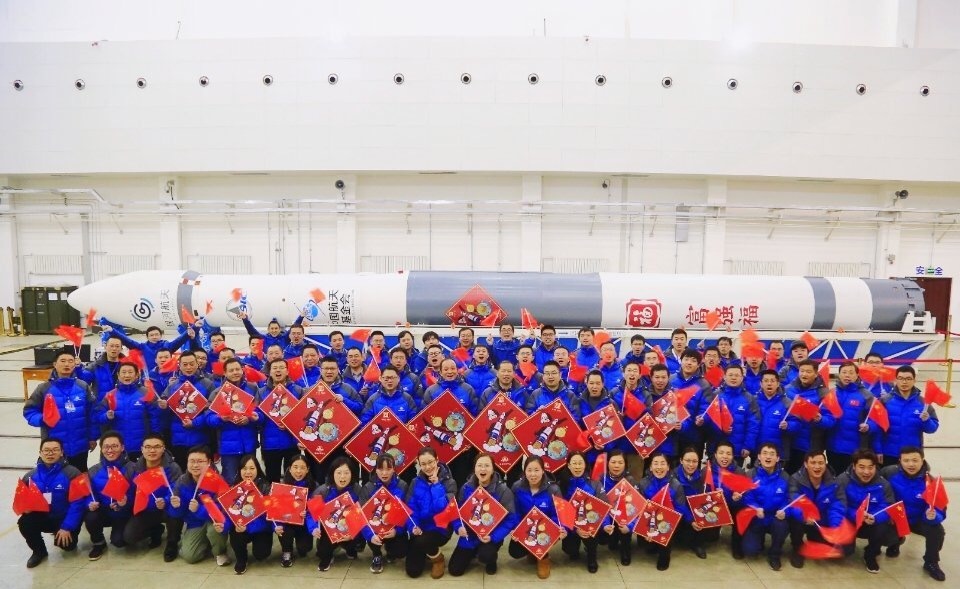 KZ-1A launch vehicle is 20 meters long with a lift-off mass of 30 tons, and its maximum diameter is 1.4 meters. The vehicle’s power is provided by three solid motors and one liquid motor.

The solid propulsion system consists of three solid vehicle motors to provide power during first stage flight, second stage flight and third stage flight. All of the three solid motors use a single fixed nozzle and do not shut off until the propellant is exhausted.

The MLP transfers the vehicle from technological area to launching area, also providing temperature and environment control of payload, vehicle test and launching by using power supply equipment, test and fire control equipment, aiming equipment, temperature control devices, which are integrated into the platform. The transport and launch vehicle employs a semi-trailer which is usually used for transporting containers. 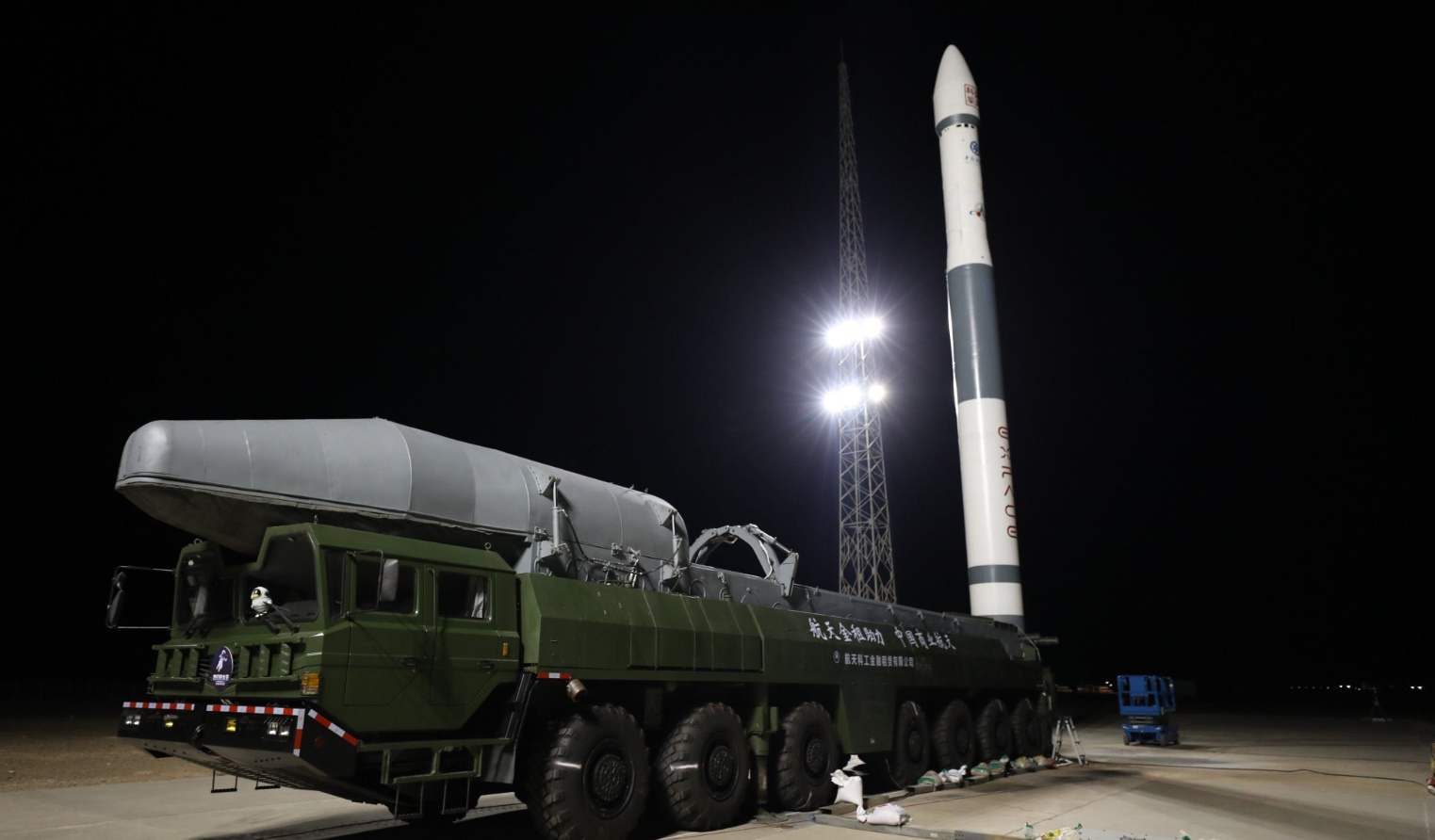 The first launch of the Kuaizhou-1A launch vehicle orbited the Jilin Linye-1 forestry satellite and two small CubeSats-2U: the Xingyun Shiyan-1 and the Kaidun-1 ‘Caton-1’. Launch took place on January 9, 2017, from the Jiuquan Satellite Launch Center. 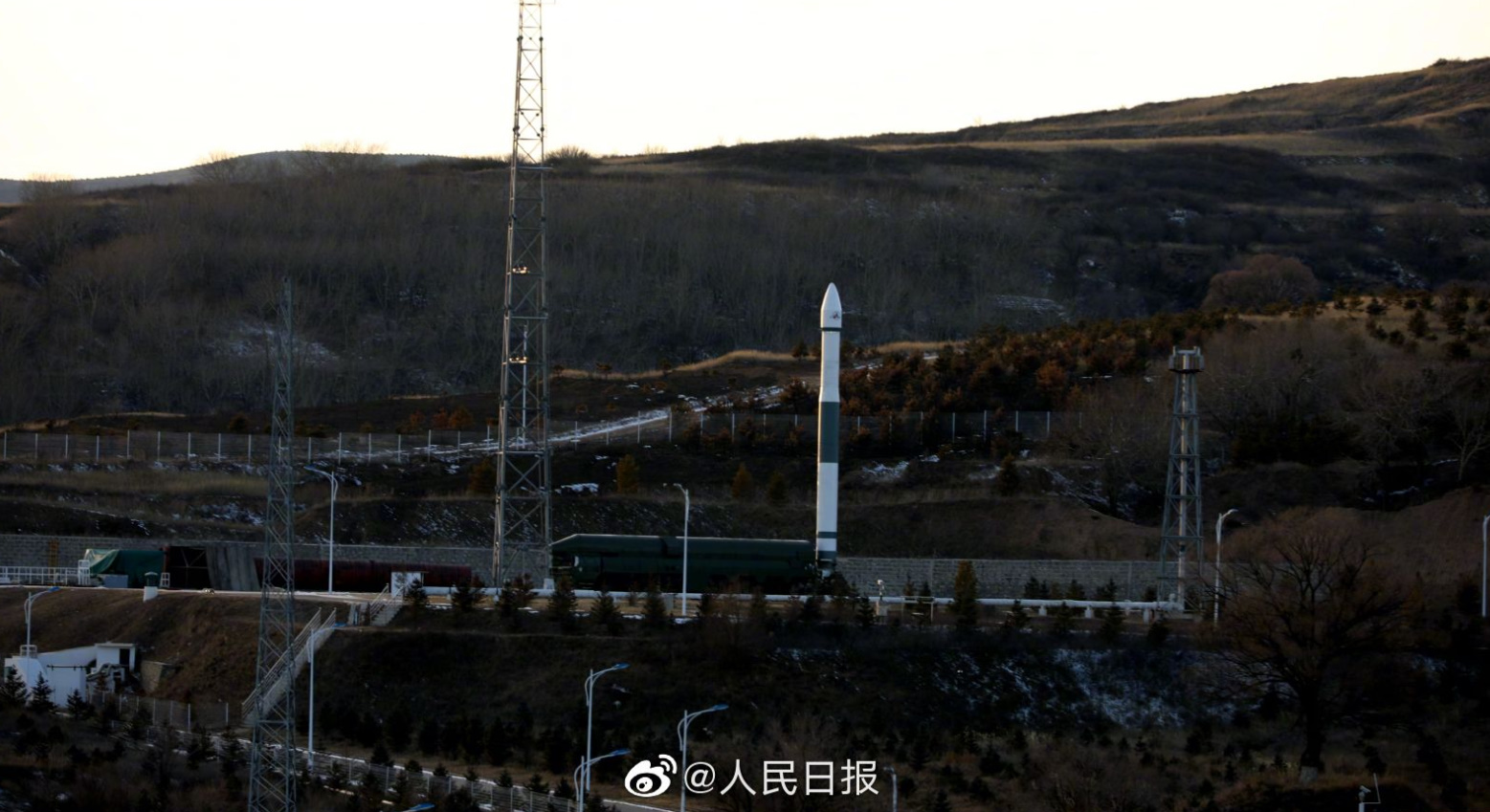 Other launch zones at the launch site are used for launching the Kuaizhou, the CZ-11 Chang Zheng-11 and other solid propellant commercial / private launch vehicles.