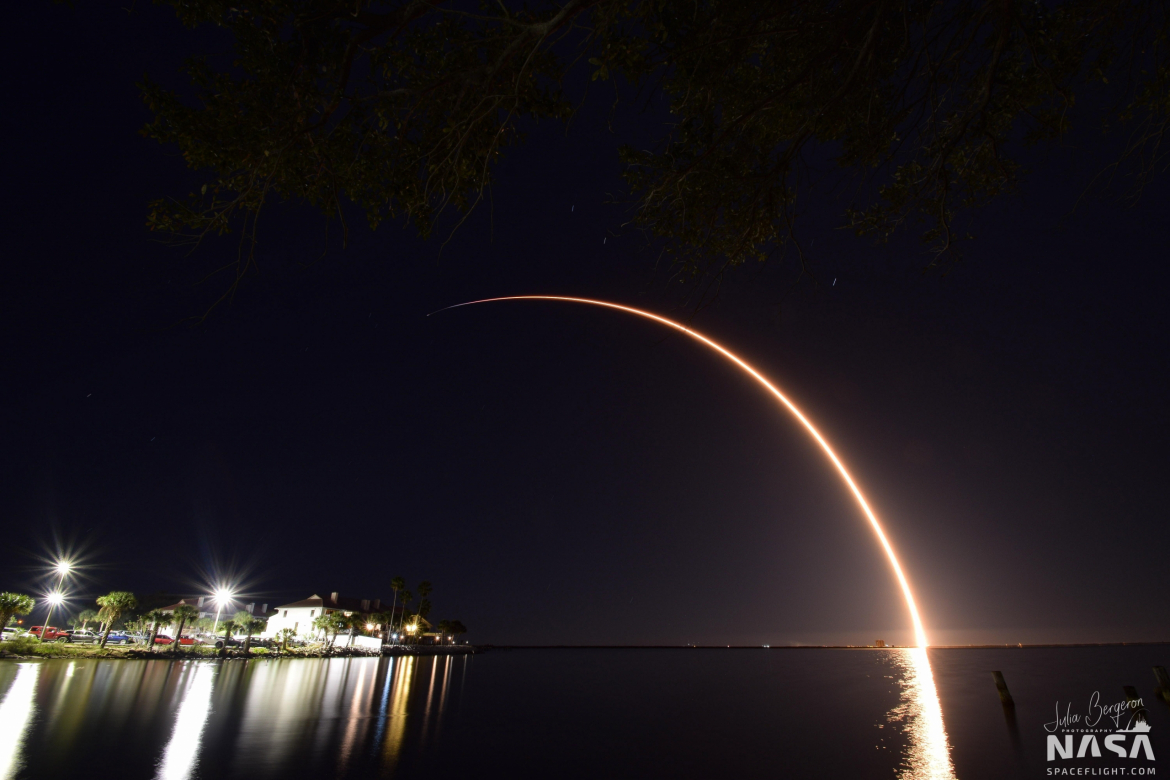 The first rocket flight of the 2020s was conducted by SpaceX, using its Falcon 9 to deliver the newest batch of 60 operational Starlink satellites into orbit.

The mission not only represents the start of a busy year for SpaceX but also for the Eastern Range in Florida, which expects 48 launches this year from the Florida Spaceport.

In keeping with previous Starlink launches, the mission utilized an already-flown Falcon 9 first stage, in this case Core B1049.4. 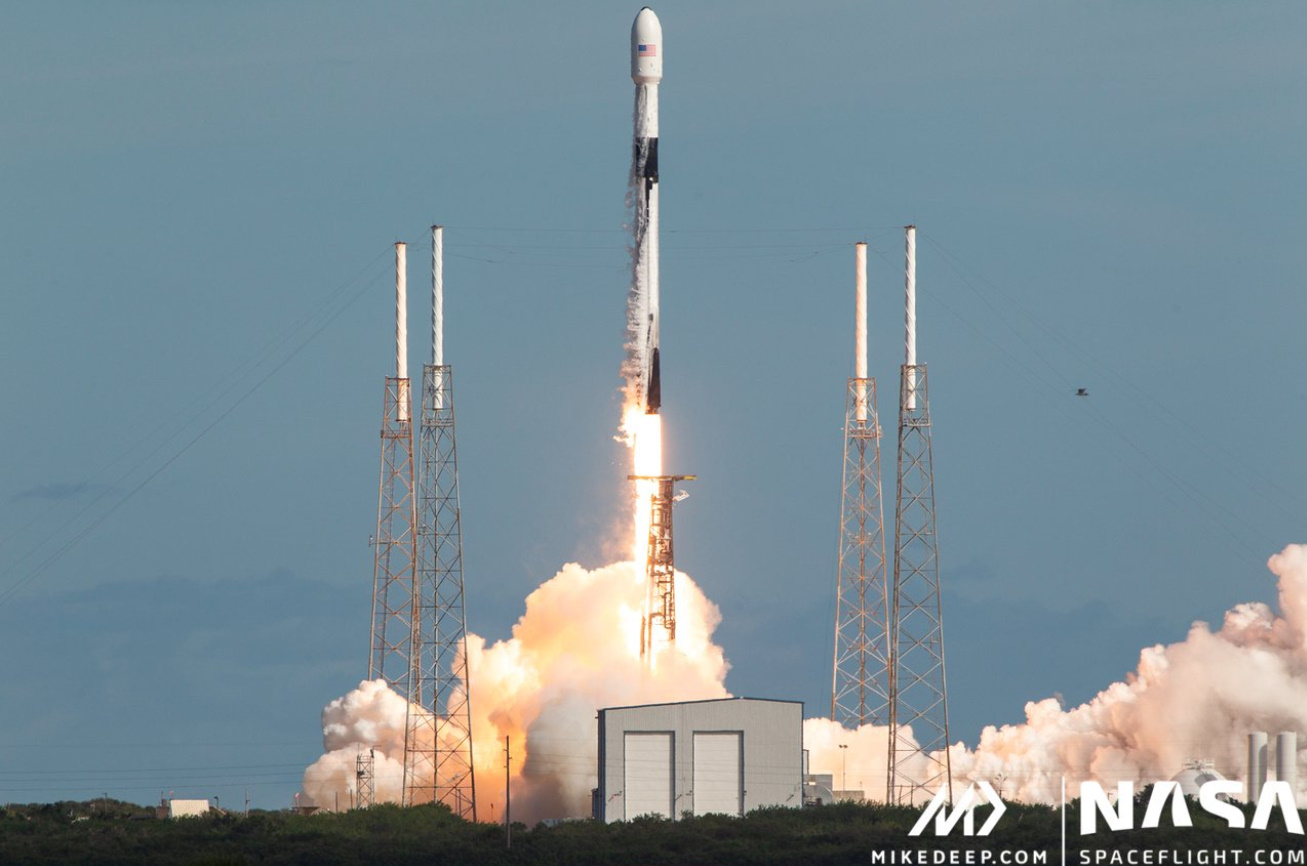 Falcon 9 ascends from SLC-40 with the first batch of operational Starlink satellites in November 2019. (Credit: Mike Deep for NSF/L2)

This booster previously launched the Telstar 18 VANTAGE mission from Florida in September 2018, the Iridium-8 flight in January 2019 from Vandenberg Air Force Base, California, and the Starlink 1 flight in May 2019.

SpaceX recovered the first stage with a landing on the Autonomous Spaceport Drone Ship Of Course I Still Love You stationed approximately 630 km northeast of the launch site in the Atlantic Ocean and approximately 250 km off the coast of South Carolina.

GO Ms. Tree will be stationed even farther downrange, 730 km, and will attempt to catch a payload fairing half as it descends under parafoil (parachute).

The payload fairing half GO Ms. Tree does not attempt to catch will splash down safely in the Atlantic for recovery.

After the initial climb to orbit is complete, the Falcon 9 entered a 36 minute 21 second coast before reigniting its second stage Merlin Vac engine for a quick 2-second burn to finalize a circular 290 km deployment orbit.

All 60 Starlinks separated simultaneously 1 hour 1 minute 30 seconds into the flight.

After that, the process will unfold exactly as it did on the previous operational Starlink mission, with all 60 Starlinks deploying their single solar array and firing up their Hall thrusters to begin spreading out and raising their orbits from 290 km to 350 km.

While in this check out orbit, activations and verifications will occur before SpaceX controllers begin raising satellites independently up to their 550 km operational orbit.

What’s different about this mission from the previous operational Starlink flight is that the deployment orbit is approximately 10 km higher and that one of the Starlink satellites will test a new “experimental darkening treatment” to reduce its visibility from the ground.

This is in direct response to the astronomical community’s desire to see SpaceX address visibility concerns the Starlink constellation has for ground-based astronomy.

While this is an important conversation, it should be noted that the Starlinks are brightest after their initial deployment and during checkout when they are in a special low-drag orientation that aims their brighter side toward the surface of Earth.

Once the satellites are undergoing checkout operations and raise themselves to their operational orbits and orientations, they become far less visible.

SpaceX is responding to the astronomical community’s concerns by testing a new darkening treatment on one of these satellites.

If successful, SpaceX could employ the darkening feature on future Starlinks.

Moreover, SpaceX will begin providing astronomy groups with what are known as predictive two-line elements (TLEs), orbit and ground pass predictions generated at least once per day, so astronomers and stellar observatories can “better coordinate their observations” around the satellite passes.

Overall, the weather forecast for the mission was incredibly favorable, with a less than 10% chance of Cape Canaveral Air Force Station weather prohibiting liftoff of the Falcon 9 tonight.

The only potential concern for tonight was the extremely small textbook chance of a cumulus cloud forming near Falcon 9’s launch path. An area of high pressure was blanketing Central Florida and bringing mainly dry and cool weather along the space coast.

Upper level winds were within launch limits, with winds out of the west at 80 knots at 45,000 feet. 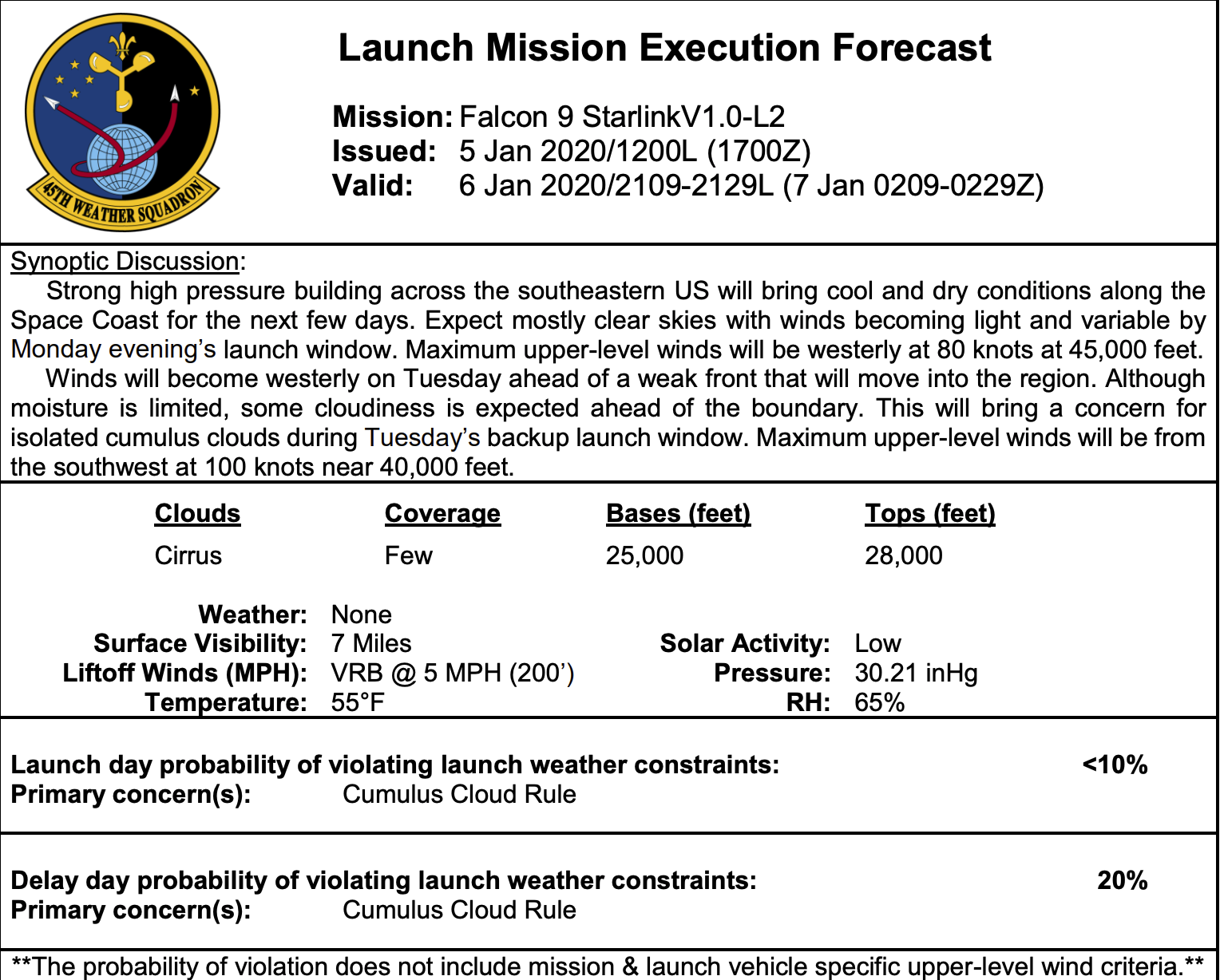 While the primary consideration with the upper level wind speed is the shear it creates as the Falcon 9 ascends through the dense lower atmosphere, historically Falcon 9 missions encountering upper level winds in the low-90 knot range or below have been fine while the mid-90 knot range provides concern yet wiggle room.

Upper-90 knot and above speeds for the upper level winds almost always result in a scrub and recycle for Falcon 9 flights.

Just some of the things that make upper level winds incredibly mission-specific include the payload mass, Falcon 9 trajectory, the angle at which the winds intersect the vehicle during ascent, whether or not the Falcon 9 is flying a payload fairing, at what time in the flight the greatest shear from the upper level winds will be encountered, etc.

All of that makes it quite difficult for the upper level winds to be included in the percent of violation forecast issued by the 45th Weather Squadron.

Instead, the Squadron provides day-of upper level wind data from weather balloons to the SpaceX launch team, which in turn makes the decision as to whether or not the winds are acceptable for flight.

In the end, this wasn’t a problem for this launch.