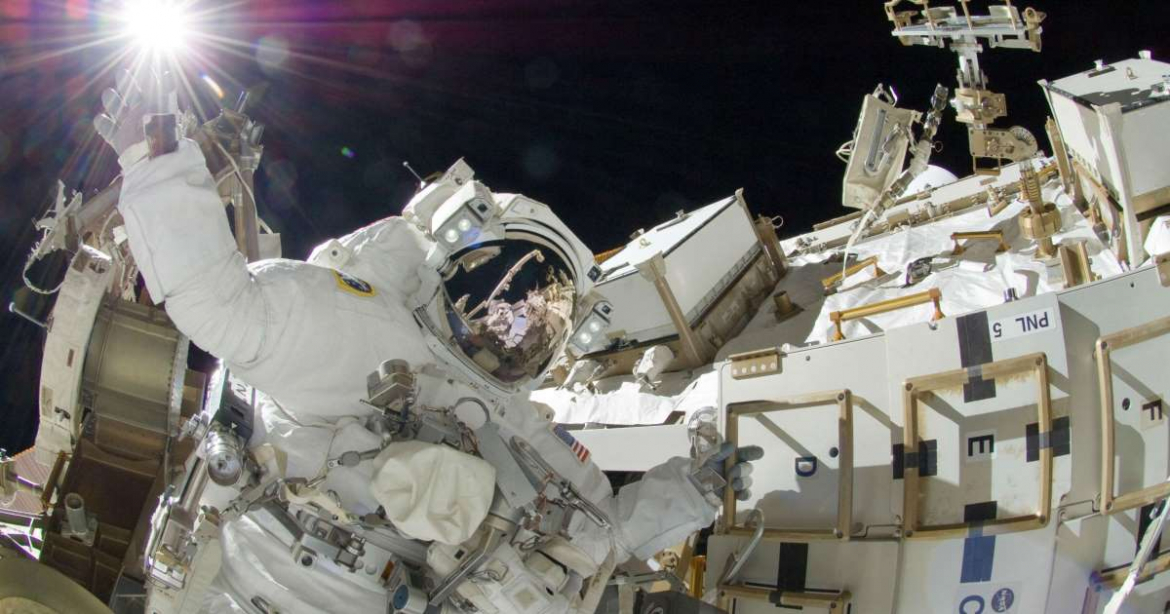 As has been the process since 2017, the U.S. segment crew aboard the International Space Station worked through a marathon series of five spacewalks to change out another subset of batteries aboard the Station’s Integrated Truss Structure. The first spacewalk (EVA-56) kick-started the series, although a third EVA was delayed until January 15 after the additional requirement of a Battery Charge/Discharge Unit (BCDU) replacement spacewalk – both of which were successful.

The five battery replacement spacewalks was completed on January 20 through to the end of January 20, replacing the 12 nickel-hydrogen batteries on the P6 truss of the Station with six brand new and more efficient Lithium-ion batteries.

Why replace the Station’s batteries?

The International Space Station’s first elements have been on orbit since 1998 with the launches of Zarya and Unity from Russia and the United States, respectively, forming the core construction of the Station’s assembly sequence.

Given the Station’s longevity, the batteries need to be replaced as their age curtails operational effectiveness.

When the plan to replace all the batteries on Station was put into place, NASA and the international partners opted to swap the aging nickel-hydrogen batteries with far more efficient Lithium-ion batteries.

The new Lithium-ion batteries have all been launched aboard JAXA (Japan Aerospace Exploration Agency) HTV crafts as they are the only resupply vehicles for the Station capable of carrying the large External Pallets needed to launch the batteries six at a time.

To date, the S4 and P4 truss elements have both had their nickel-hydrogen batteries replaced with new Lithium-ion batteries, and work will now begin to replace the batteries in the P6 truss.

The S6 truss’s battery replacement will occur next year following the planned May 2020 launch of the HTV-9 vehicle with a final set of six new batteries.

Each new Lithium-ion battery will replace two nickel-hydrogen batteries and will provide greater storage and power efficiency for the Station’s myriad systems and experiments for the years to come.

How to swap out the batteries on the remote, P6 truss location:

The P6 truss is the farthest component of the Integrated Truss Structure from the Station’s core modules on the port side of the outpost, and its battery replacement effort will be far more hands-on for the spacewalking crews than the previous battery swaps have been. 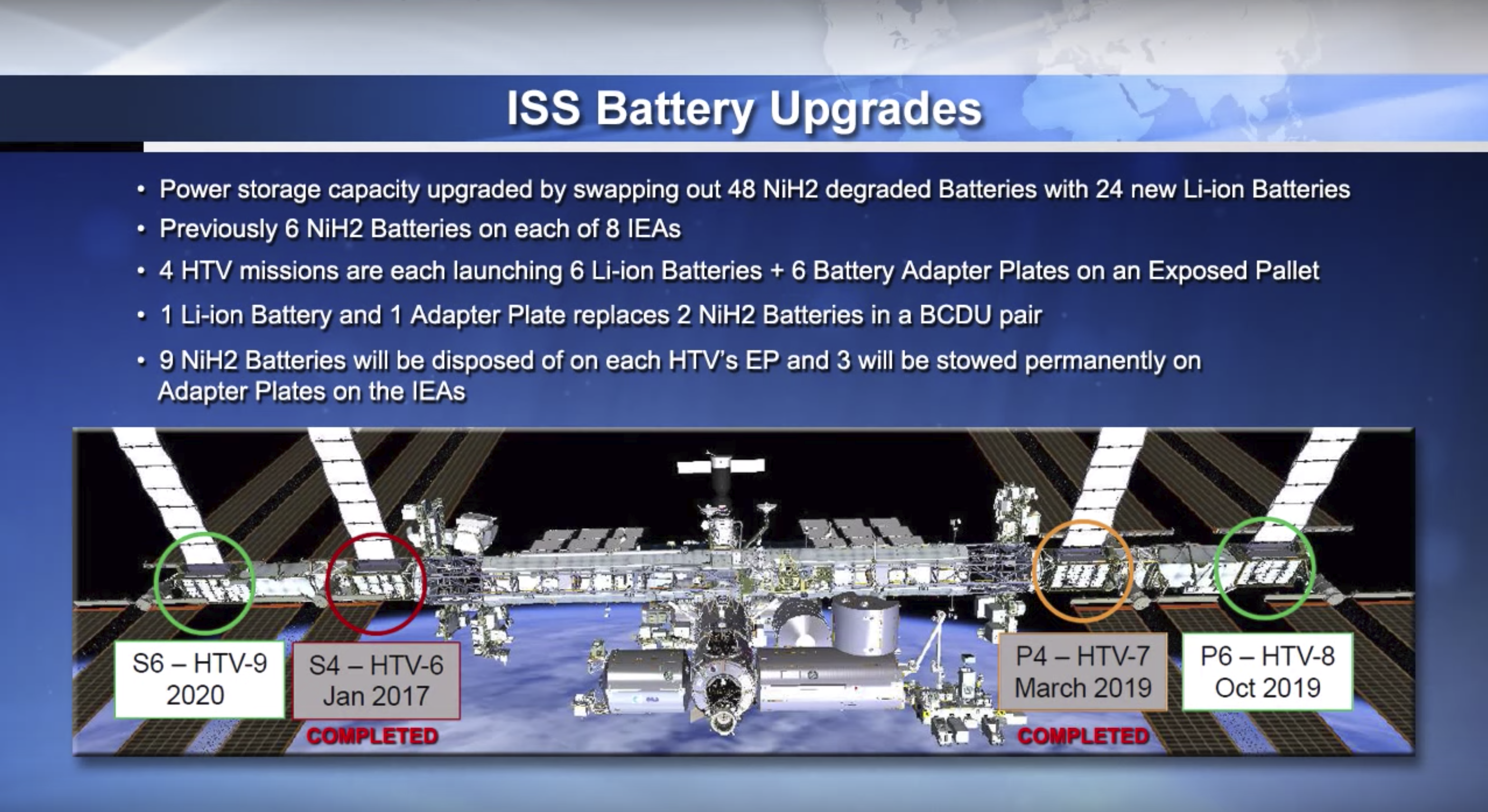 Prior swap outs on the S4 and P4 truss elements were done in large part by robotic operations, with crews going out – as T.J. Creamer, Spacewalk Flight Director, and Keith Johnson, Lead Spacewalk Officer, noted at the NASA press conference detailing the current spacewalk plan – to make final electrical channel connections after the Station’s robot arm completed the battery removal and replacements (R&Rs).

The Canadarm2 and Dextre battery R&R was possible because the S4 and P4 truss elements are closer to the Station’s core, are accessible by the robotic arm and have locations where the Exposed Pallet carrying the new batteries and on which some of the old batteries were stored could be anchored to the Station.

The P6 truss is located much farther out and is not reachable by the Station’s Canadarm2.

To this end, the R&R work of the P6 batteries will have to be done by hand by pairs of two spacewalking astronauts throughout five spacewalks, or Extravehicular Activities (EVAs).

Canadarm2 must keep hold of the Exposed Pallet because there is no anchoring point that far out on the Station’s truss on which to mount it.

Thus, the Station arm cannot make use of the Orbiter Boom Sensor System – a post-Columbia Shuttle arm used to inspect the nose and wing RCC (Reinforced Carbon-Carbon panels for damage after launch and again before reentry – left behind by the Space Shuttle Endeavour on STS-134 to extend its reach to P6.

Endeavour’s sensor system boom was left on the International Space Station specifically to extend the Canadarm2’s reach to the more extreme portions of the Station for certain types of astronaut related work.

But using the boom for that purpose requires mounting one end of Canadarm2 to the Station and using its other end to grapple the sensor system arm, leaving no grappling fixture for it to keep hold of the Exposed Pallet with the new batteries.

In preparation for the EVAs, Canadarm2 removed the Exposed Pallet from HTV-8 during the last weekend in September.  Before moving the Pallet into position for the spacewalks, the arm-mounted it to the Station’s exterior and then performed get ahead tasks such as breaking the torque on the bolts that attach the new batteries securely to the pallet for launch.

Breaking the torque on these bolts provides a good margin for the crew, eliminating one step in their EVA and allowing them to move more directly into the replacement activities.

For the first spacewalk, known as US 56, NASA astronaut Christina Koch, who has been aboard the Station since March 2019 and participated in the previous series of battery replacement EVAs, was the lead spacewalker.

She was joined by fellow NASA astronaut Dr. Drew Morgan.

The overall goal of the five EVA sequence will be to systematically remove the 12 nickel-hydrogen batteries from the P6 truss’s Integrated Electronics Assembly and replace them with 6 Lithium-ion batteries.

Because two batteries are being swapped out for one, an Adaptor Plate must be installed into the slot where the second nickel-hydrogen battery is removed from, thus completing the electrical circuit as originally designed.

Nine of the old nickel-hydrogen batteries will then be installed onto the Exposed Pallet for eventual disposal into Earth’s atmosphere at the end of an HTV mission.

Since all 12 nickel-hydrogen batteries cannot be disposed of at the same time (as all 12 will not fit on the Exposed Pallet), the remaining three will be installed on top of a new Adaptor Plate, placing them in storage where they can be used as backups in the event of a Lithium-ion battery failure.

This backup role was seen earlier this year on the P4 truss when a Lithium-ion battery returned suspect readings after installation and activation.  It was subsequently swapped out for two nickel-hydrogen batteries while NASA investigated the reason for the hiccup in battery performance.

In terms of physically moving the new batteries from the Exposed Pallet and installing them on the Integrated Electronics Assembly of the P6 truss, T.J. Creamer said, “You have to use fine motor skills and go very very slowly.  Moving large objects and massive objects are very doable in space, you just have to be careful and go slowly.

“The bigger issue is visibility.  If I’m going to hand you a small refrigerator-sized object, it’s going to take up most of my visual field.  So there’s a lot of verbal communication to make sure we’re going to have positive handoff between the crewmembers.”

The worksite configuration, with Canadarm2 holding the Exposed Pallet out for the crew to take new batteries off and install old batteries onto it. (Credit: NASA)

Keith Johnson added, “We really have to protect how we handle the batteries and how we put the batteries in because there are connections that have to go into the Integrated Electronics Assembly, and they can’t be damaged or dented.

There were numerous elements involved in determining which crewmembers perform which spacewalks.

In this case, a wonderful benefit is that all four U.S. segment crew members are trained in these types of skills-based EVAs.

In this particular case, skills-based EVAs are those that require astronauts to have formal training in basic spacewalk procedures but not to have trained for the specific spacewalk on the ground in the Neutral Buoyancy Laboratory before launch.

With all four U.S. segment crewmembers capable of performing the battery R&R EVA series, all four will participate.

As all four of them had not performed the EVA series on the ground in training, the needed materials and procedures have been uploaded to them, and study time has been provided as well as consultations with EVA planners and operators on the ground about the specific tasks they will have to perform.

While Christina Koch and Dr. Morgan performed the first spacewalk outside, inside the Station, Luca Parmitano was the suit and IVA (Intervehicular Activity) coordinator while Dr. Jessica Meir controls the Canadarm2 – which is moved and rotated to different orientations throughout the EVA for crew access to the new batteries and storing the old ones.

On the ground, NASA astronaut Stephanie Wilson – a veteran of three Space Shuttle assembly missions to the Station and lead robotics officer on all of her flights – served as the ground coordination officer, responsible for talking the crew inside and outside the Station through the procedures and tasks.

The first EVA was way ahead of its timeline, allowing for some work dedicated to EVA-57 to be completed ahead of schedule.

The second EVA, including Morgan and Koch, was just as productive, completing all of the designated tasks and finding time to work get-ahead tasks for EVA-58.

The third EVA was postponed due to an issue with a Battery Charge/Discharge Unit (BCDU) which required a standalone EVA to replace – which was successful late last year.

The BCDU failed to activate following the Oct. 11 installation of new lithium-ion batteries on the space station’s truss. https://t.co/kt6O6OUxmE

With the battery work restarting on January 15, Meir and Koch once again went about replacement three battery sets, completing all their tasks without issue. Given the change of spacewalk order, this was classed as EVA-62.

Jessica and Christina have knocked this EVA-62 out of the park. All primary tasks complete. Into get-ahead tasks.https://t.co/rj9Q7Ewt75

Good summary of this EVA from the NASA PAO just now:#LotsOfBatteries pic.twitter.com/zIykX0hNLz

The next spacewalk – EVA-62 – was conducted on January 20. Moving the final new battery into place and ensuring the used batteries were stowed ahead of their eventual disposal on a future HTV when it heads to its own destructive re-entry.

This closed out the series of spacewalks and completed the ISS upgrade for its battery power systems.