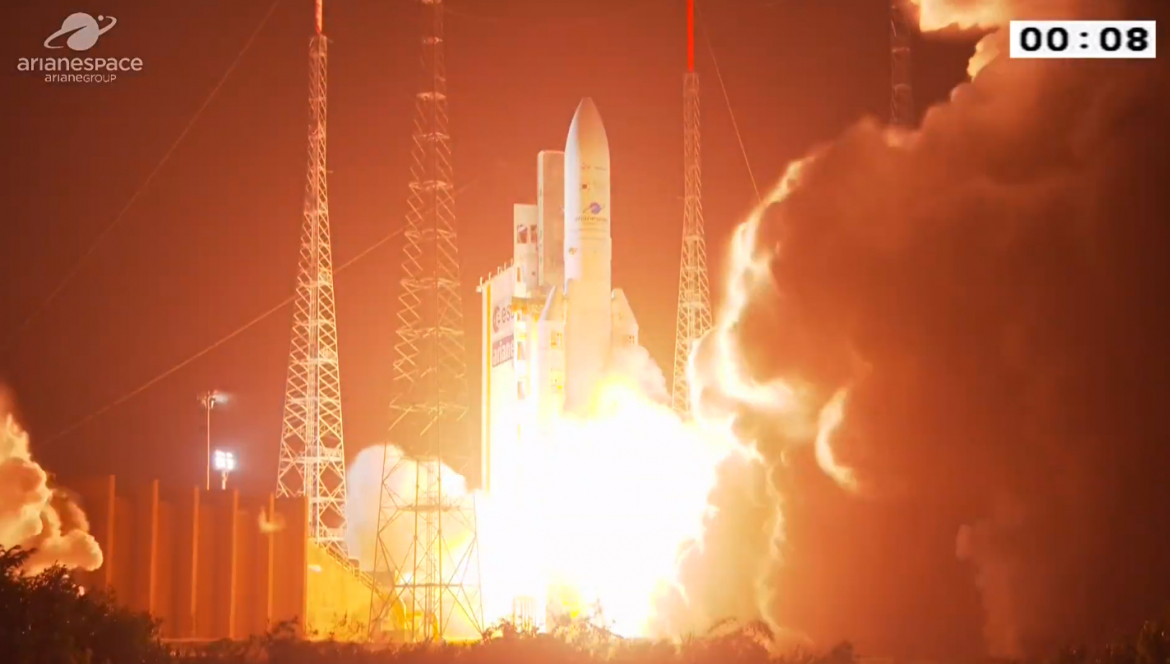 The second Ariane 5 mission of the year lifted off from the Guiana Space Centre in Kourou, French Guiana, in South America on a rideshare mission that launched the GEO-KOMPSAT-2B and JCSAT-17 satellites for South Korea and Japan, respectively.

The launch occurred at the opening of a 62 minute launch window at 22:18 UTC.

The heavy lift champion of the European rocket family, Ariane 5 is the current iteration of the Ariane rocket and has been flying since 1996 with 106 missions (not counting this one) to its credit.

Unique among the rocket world, Ariane 5’s launch countdown actually reaches zero before its liquid fueled core stage engine, Vulcain 2, is ignited on the pad for 6.3 seconds of time to ramp up to full thrust and undergo health checkouts.

Once the on-board flight computers confirm the health of the Vulcain 2 engine, the commands are sent to light the two massive solid rocket boosters flanking the core stage, permitting liftoff underneath 13,000 kN (2,922,516 lbf) of thrust from the boosters and Vulcain 2 engine. 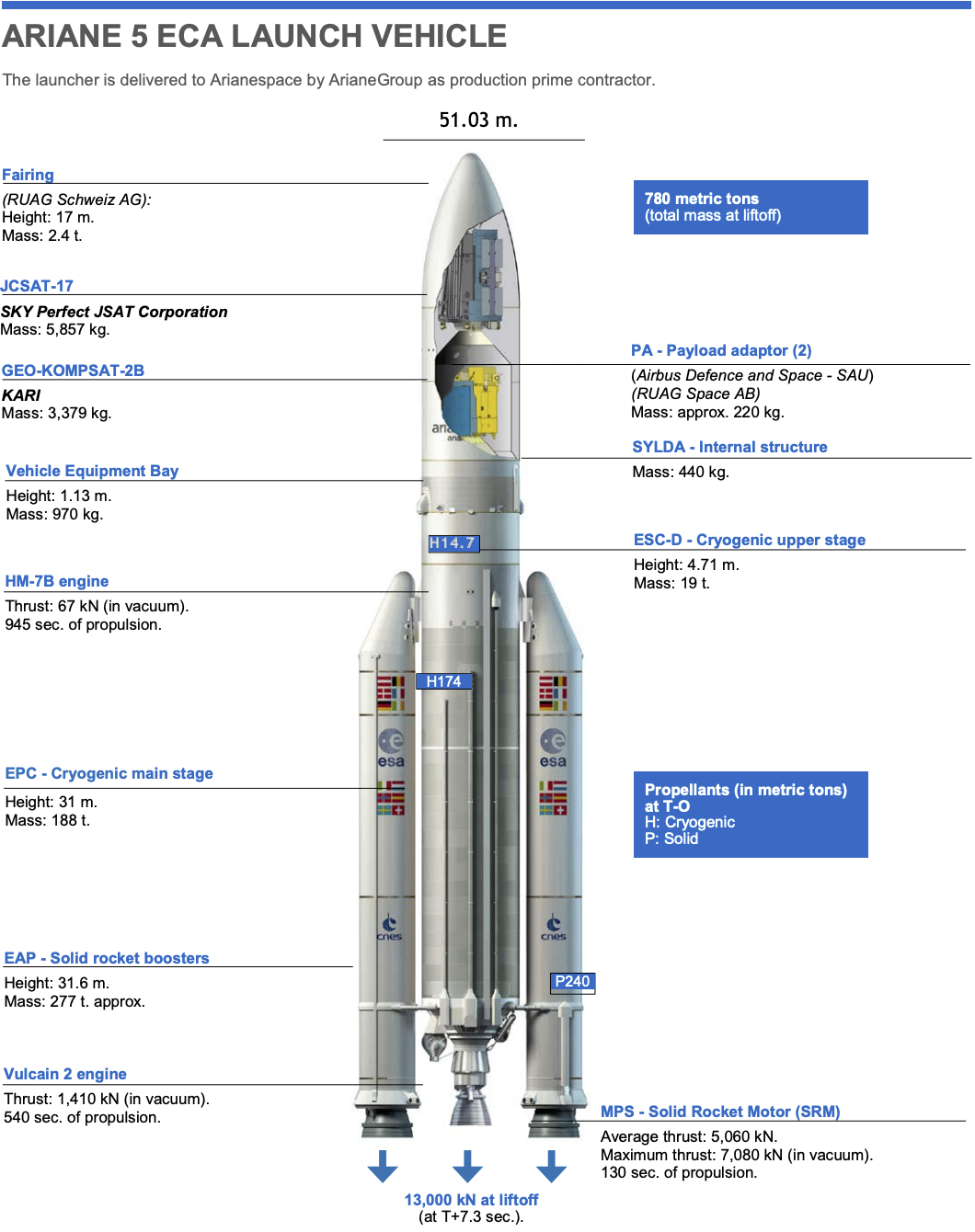 The Ariane 5 configuration for this mission. (Credit: Arianespace)

After clearing the lightning protection towers, Ariane 5 will perform a pitch in a roll manoeuvre to place itself onto the correct azimuth — or trajectory — for a flight to Geostationary Transfer Orbit (GTO) inclined 6° to the equator.

Ariane 5 is quite suited to these rideshare missions to GTO, with a launch site positioned within 3° of the equator allowing the rocket to maximise its own performance while utilising the most launch help given by Earth’s rotation due to the close proximity of the Guiana Space Center to the equator.

The solid rockets propelled Ariane 5 through the dense lower atmosphere before the rocket’s flight systems began to pitch the vehicle over in an effort to gain much more horizontal acceleration than vertical acceleration — exactly what was needed to obtain orbit.

After 2 minutes 21 seconds, the solid rockets burned out and jettisoned, leaving the core stage’s single Vulcain 2 to engine to continue taking the stack onward toward its orbital insertion point.

In total, the Vulcain 2 engine burned for 8 minutes 39 seconds before depleting its liquid hydrogen and liquid oxygen fuel reserves and shutting down. 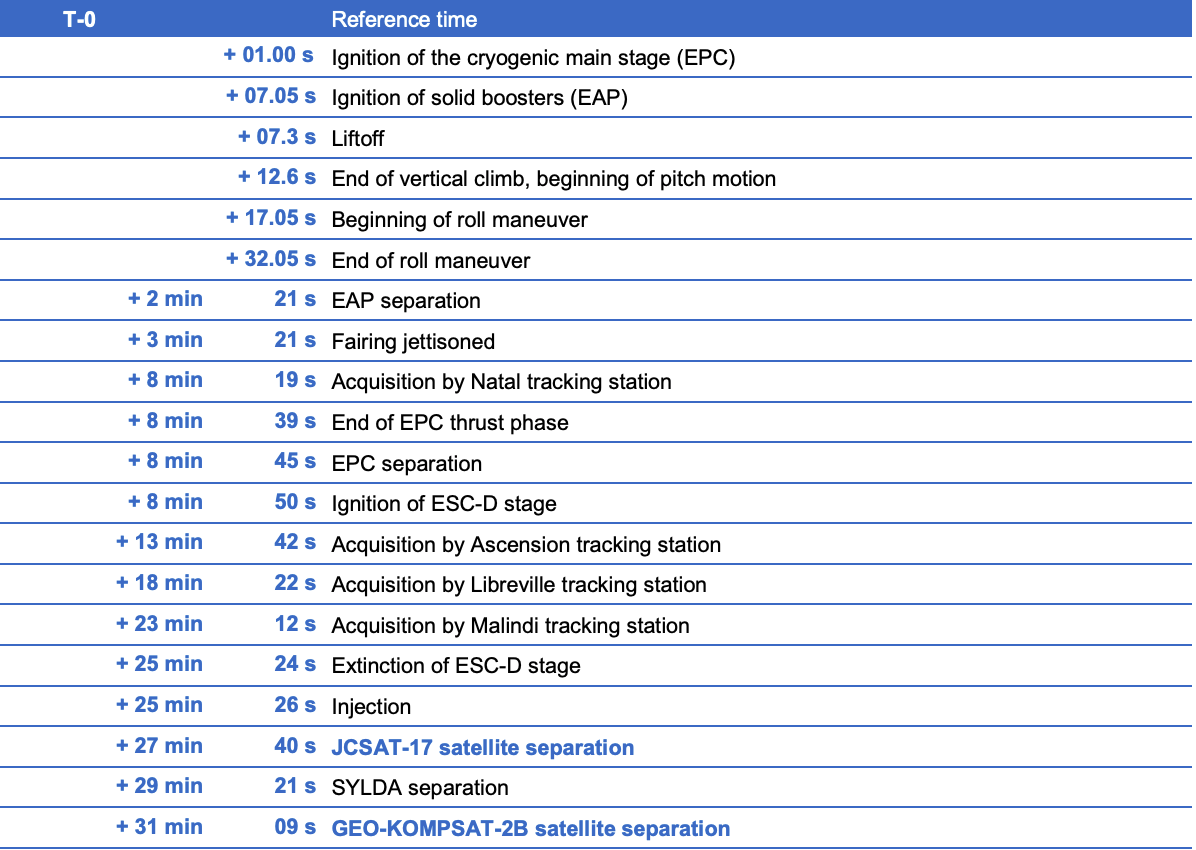 The mission timeline from T0 to GEO-KOMPSAT-2B deployment. (Credit: Arianespace)

This upper stage burned continuously for nearly 16 minutes 26 seconds, resulting in a total near-continuous burn time of the Ariane 5 rocket for 25 minutes 24 seconds to insert its two passengers into GTO.

This 25 minute burn is also unique among launchers going to GTO, differing in the major way that almost every other rocket burns first into a parking orbit and then coasts before initiating its upper stage engine again for the injection to GTO.

Ariane 5 does it all in a single upper stage burn.

The first passenger to separate was JCSAT-17 from SKY Perfect JCSAT Corporation of Japan.

Riding in the upper passenger position on this launch, JCSAT-17 is the latest in a series of telecommunication satellites for SKY Perfect JCSAT Corporation.

Built by Lockheed Martin Space, the telecommunications satellite will be placed in the 136° East Geostationary orbit location, permitting full visibility and coverage range across the Japanese archipelago.

With a launch mass of 5,857 kg, the satellite is a liquid bipropellant vehicle capable of communicating in the S-, C-, and Ku- band ranges of the communication spectrum.

The Ku-band spectrum is most commonly known in everyday life as the frequencies used by police agencies in radar-gun speed detectors.  It was also used by NASA for primary communications channels with the Space Shuttle fleet while in orbit.

JCSAT-17 carries a 15 year operational life, with communication coverage across the entire Japanese archipelago as well as the Asia-Pacific region.

Despite its numerical designation as JCSAT-17, this was actually the 21st satellite from SKY Perfect JCSAT to be launched by Arianespace and of the 32nd satellite launched by the company for the nation of Japan. 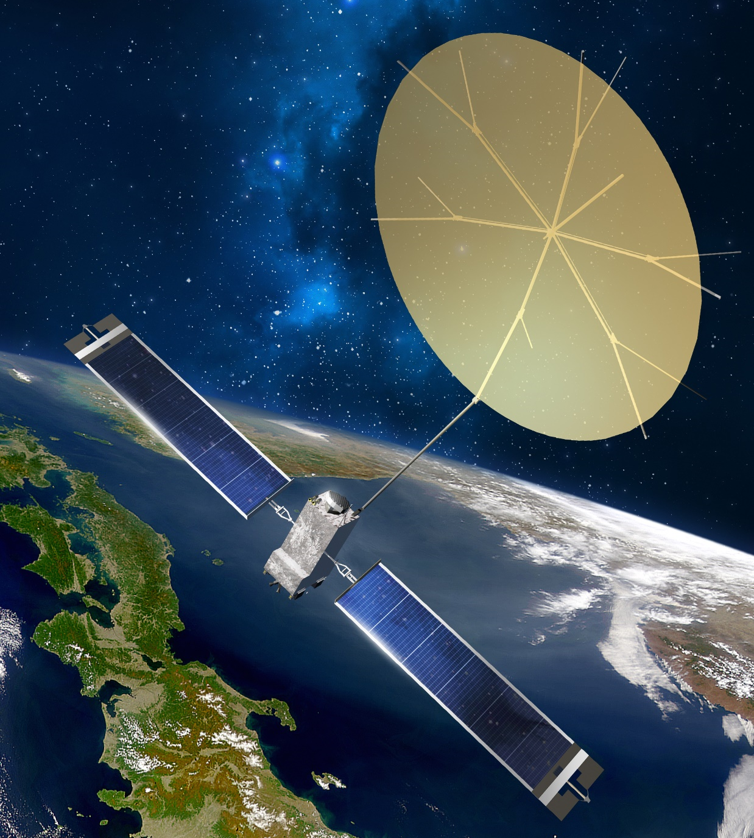 This also marked the 47th satellite manufactured by Lockheed Martin to be launched by Arianespace.

Riding in the lower position was GEO-KOMPSAT-2B for the Korea Aerospace Research Institute, or KARI.

Built and operated by KARI, the satellite will be placed into the 128.2° East Geostationary location and will rely on a single lithium-ion battery and chemical bipropellant for power and propulsion purposes once released from the top of the Ariane 5’s upper stage.

The satellite has a designed lifetime of more than 10 years and will see the fulfilment of a national program of the Korean government to develop and operate two civilian Geostationary satellites for meteorological and space weather monitoring as well as Earth and ocean monitoring.

The two main scientific payloads were provided by Airbus Defence and Space and Ball Aerospace and Technologies, respectively.

GEO-KOMPSAT-2B will operate in conjunction with its counterpart, GEO-KOMPSAT-2A — which is providing the meteorological and space weather monitoring part of the joint mission.