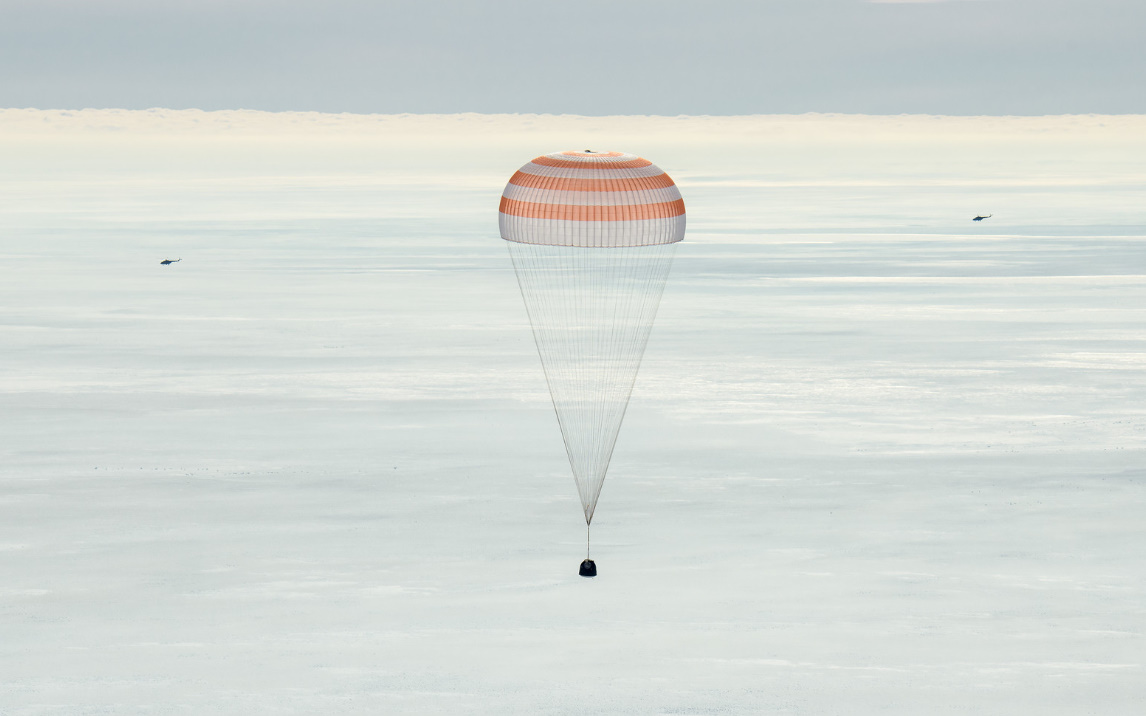 The trio undocked from the International Space Station aboard the Soyuz MS-13 spacecraft at 00:50 EST (05:50 UTC) before initiating a deorbit burn two and a half hours later ahead of a 04:12 EST (09:12 UTC) landing on the steppes of Kazakhstan.

Christina Koch launched to the International Space Station aboard the Soyuz MS-12 launch vehicle on 14 March 2019 from the Baikonur Cosmodrome in Kazakhstan.

At the time of launch, she was scheduled to perform a six-month mission, returning to Earth on the Soyuz MS-12 vehicle in early October 2019.

However, a variety of factors aligned to place NASA in the position of allowing one of its astronauts to remain aboard the International Space Station for close to one year.

Christina was the logical choice given her background and EVA/spacewalk training.

The decision, announced just one month after she began living and working aboard the Station for a few months, meant Christina would become the world-wide record holder for longest continuous time in space by a woman.

In fact, with a landing Thursday, Christina will have been in space 328 days, just 12 days shy of fellow NASA astronaut Scott Kelly’s record for single-longest continuous time in space by a NASA astronaut at 340 days.

This places Christina as the second-of-all-time for continuous time in space of any NASA astronaut.

The near-doubling of Christina’s original mission stems largely from the In Flight Abort of the Soyuz MS-10 spacecraft in October 2018, which had the precipitating effect of reducing the International Space Station’s permanent crew from six down to three people from October 2018 through March 2019.

The associated crew reshuffle to ensure adequate occupation of the Station among the international partners and various contractual agreements ended up shifting the quick sortie mission of spaceflight participant Hazza Al Mansouri of the United Arab Emirates.

His launch on Soyuz MS-15 meant someone who launched on Soyuz MS-12 would have to give up their seat for his return.

After consultation between the international partners, it was agreed NASA would get the extended missions and that Christina would give up her seat on Soyuz MS-12 to allow Hazza to return after a one-week stay aboard the orbiting outpost.  Christina would now instead return on Soyuz MS-13.

But Christina taking a return seat on Soyuz MS-13 meant that someone who had launched on that Soyuz would have to give up their return seat for Christina.

NASA therefore decided to extend Dr. Andrew Morgan’s flight from seven months to nine months so that Christina could take his return seat on Soyuz MS-13 while he remained aboard the Station until Soyuz MS-15’s scheduled departure in late-April 2020, taking the seat originally occupied by Hazza for launch.

In addition to the spaceflight participant element of the crew reshuffle, another large element had to do with the continued delays to the Commercial Crew launch capability from NASA.

The four seasons of the incredible Yellowstone Lake in @YellowstoneNPS. Spending 11 months in space means getting to watch your favorite places on Earth even as they change throughout the year. pic.twitter.com/tFxXe040S8

As it currently stands, NASA and the entire U.S. Operating Segment of the Station, which includes Canada, Europe, and Japan, will have to reduce their crew complement from four down to one starting in late-April 2020 until SpaceX can begin launching astronauts to the International Space Station in Quarter 2 (April-June) of this year.

By extending both Christina and Andrew’s missions, NASA was able to ensure a more seamless transition to the pending crew reduction, with the hope being that SpaceX will be able to launch an extended Demo-2 mission to the International Space Station shortly after the U.S. segment crew reduces down to one.

An extended SpaceX Demo-2 mission would maintain a three-person presence on the U.S. side of the Station when possible.

At present, NASA has not revealed a formal extension of Demo-2 from its planned week-long sortie, nor has an official target launch date been announced — though NASA and SpaceX were confident in an April to June timeline for the mission’s launch two weeks ago after SpaceX’s successful In Flight Abort test.

For Christina, this doubled time in space has allowed her to participate directly in 210 scientific investigations and perform six spacewalks outside the International Space Station for a total spacewalking time of 42 hours 15 minutes.

In terms of the science performed, Christina participated in a number of studies to support future deep-space missions, including research into how the human body adjusts to weightlessness, isolation, radiation, and the stress of long-duration spaceflight.

Particularly, Christina participated in the Vertebral Strength investigation, which better defines the extent of spaceflight-induced bone and muscle degradation of the spine, and the associated risk for broken vertebrae. 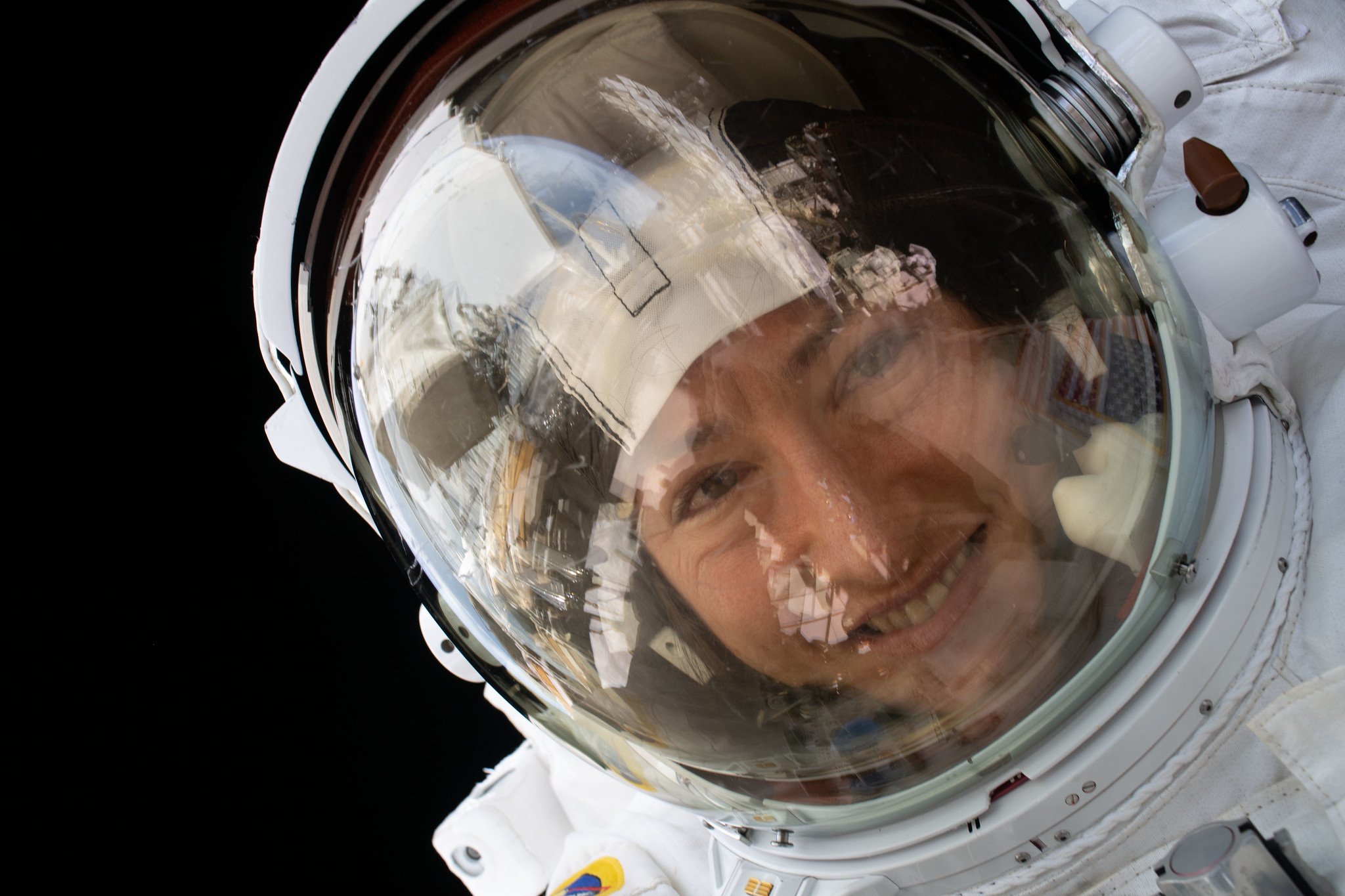 NASA astronaut Christina Koch is pictured during a spacewalk on 15 January 2020. (Credit: NASA)

According to NASA, “This timely endeavor is expected to provide insight into the development of future countermeasures, such as preventative medicine or exercise.  These results also could provide recommendations for limiting the amount of force astronauts are subjected to during launch.”

Christina’s year-long mission also provides excellent insight into how not just the human body but the female body in particular reacts and adapts to prolonged exposure to microgravity, something that has to be understood before more long-term and deep space missions to the moon and Mars occur.

“NASA has gathered vast amounts of data about astronaut health and performance during the past 60 years and has focused recently on extended durations up to one year with the dedicated mission of Scott Kelly, Peggy Whitson’s three long-duration space missions that together lasted 665 days, and now the extended-duration missions of both [Christina and Andrew],” said the agency.

“These opportunities also have demonstrated there is a significant degree of variability in human response to spaceflight, as well as the importance of determining the acceptable degree of change for both men and women.

“NASA has a rigorous training process to prepare astronauts for their missions, a thoroughly planned lifestyle and work regimen while in space, and an excellent rehabilitation and reconditioning program for them after they return to Earth.  Thanks to these measures, the human body remains robust and resilient even after spending nearly a year in space.”

After vestibule depressurization and system checkouts, the Soyuz MS-13 undocked from the Station at 00:50 EST (05:50 UTC) on Thursday, 6 February, to begin the two orbit process of bringing the trio home.

After leaving Station, Christina, Luca, and Aleksandr closed the hatch between the Soyuz MS-13’s Orbital Module (where the docking systems and hatch to the Station are located) and the Descent Module (where the crew sits for launch, reentry, and landing).

Two orbits after undocking, the Soyuz MS-13’s computers performed the craft’s deorbit burn at 03:18 EST (08:18 UTC) using an engine on the back of the Instrumentation and Service Module.

Shortly thereafter, the Soyuz reoriented itself and then separated into its three constituent parts – the Orbital Module, the Descent Module, and the Instrumentation and Service Module – as it flies northeast over northern Africa.

The Descent Module then plunged into the atmosphere over Egypt and the eastern Mediterranean Sea, engulfed in super-heated plasma created by friction between the spacecraft and the atmosphere.

During the plasma stage of reentry, communications were blocked — which is normal.

Once safely through the plasma stage of reentry, the Descent Module released its parachutes and began signaling recovery forces with a series of “beeps” that provide tracking information.

This landing time is based on a nominal reentry trajectory and profile.

Soyuz also had a backup trajectory available to it – known as a Ballistic Reentry – in the event an emergency is detected after the deorbit burn occurs.

This type of emergency reentry profile last occurred on back-to-back Soyuz TMA landings on the TMA-10 and -11 missions when the Instrumentation and Service Module failed to fully separate from the Descent Module.

When this occurred, the Descent Module’s computers triggered a ballistic reentry on both flights – a trajectory designed to get the crew through reentry as quickly as possible to maintain their safety.

The trajectory on ballistic reentries is much steeper, exerts higher G-force loads on the crew, and results in a landing hundreds of kilometers from the intended recovery zone.

In both the Soyuz TMA-10 and -11 cases, the ballistic reentry worked as intended with a safe recovery of the crew.