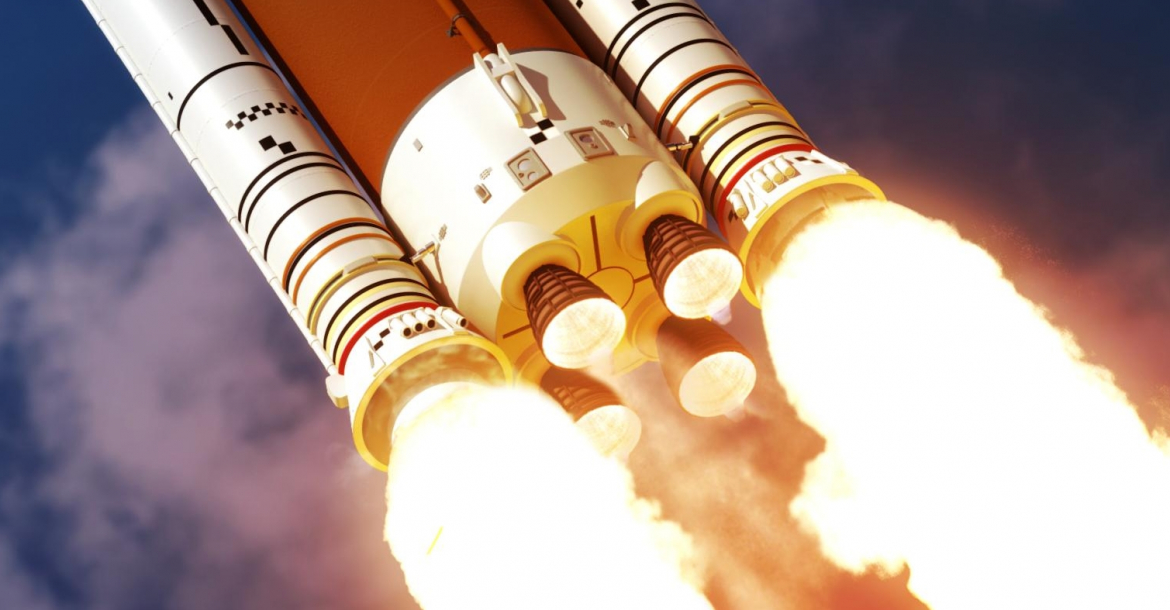 Preparations continue at the Kennedy Space Center in Florida for the first launch of the Space Launch System, or SLS rocket – NASA’s gigantic rocket the agency hopes to use to launch humans to the lunar surface and to the commercial-rocket constructed Lunar Gateway.

An important part of any rocket’s launch campaign, especially a maiden voyage, is the Launch Team undergoing numerous practice runs and countdown simulations of the launch campaign.

This month, under the direction of Charlie Blackwell-Thompson, Artemis 1 Launch Director, the Florida launch team simulated critical portions of the SLS countdown to ensure everyone is ready to handle any situation launch day throws their way.

The simulation occurred on 3 February inside the newly revamped Firing Room 1 at the Launch Control Center, located next to the Vehicle Assembly Building.

The practice countdown focused on the critical Terminal Count — the final portion of the countdown that begins when the clocks and systems come out of the Built-In Hold at T-10mins.

From there, the count continues through swing arm retractions, fuel tank pressurizations for flight, ignition of the four RS-25 liquid fueled Core Stage engines to T0 and the moment of Solid Rocket Booster ignition and liftoff. 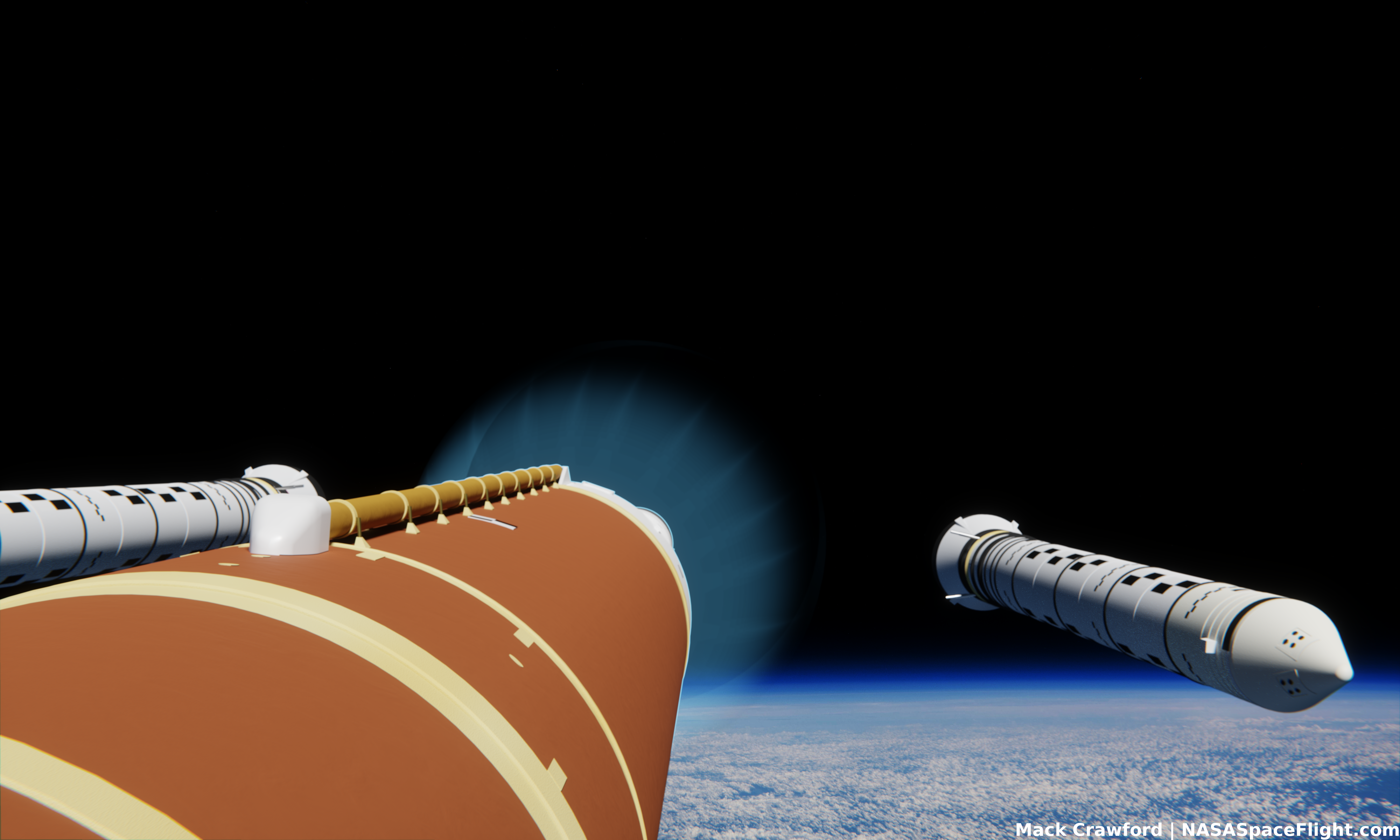 In all, SLS’s countdown is 45 hours 40 minutes long, about a day shorter than the Space Shuttle’s countdown.

The SLS count has two Built-In Holds — one before fueling operations commence and a 30 minute hold at T-10mins.

While anything can happen at any point in the count the launch team would have to react to, the critical T-10 minute to T0 terminal count is a complex and time-constrained period right before liftoff where last minute issues have to be identified, worked, discussed, and a path forward determined under extreme pressure for the team.

Especially when the given day’s launch window might result in very little time to solve an issue before having to launch or scrub.

Charlie Blackwell-Thompson is a veteran of such counts.  She served as the NASA Test Director and Assistant Launch Director at the end of the Shuttle Program when all launches were constrained to 5-minute Station launch windows.

Regarding the recent SLS terminal count simulation, Blackwell-Thompson said, “These are always great days as our team gets an opportunity to learn together.  Our team got to work through a variety of problems while also completing the work steps in the launch countdown to get to T-zero.” 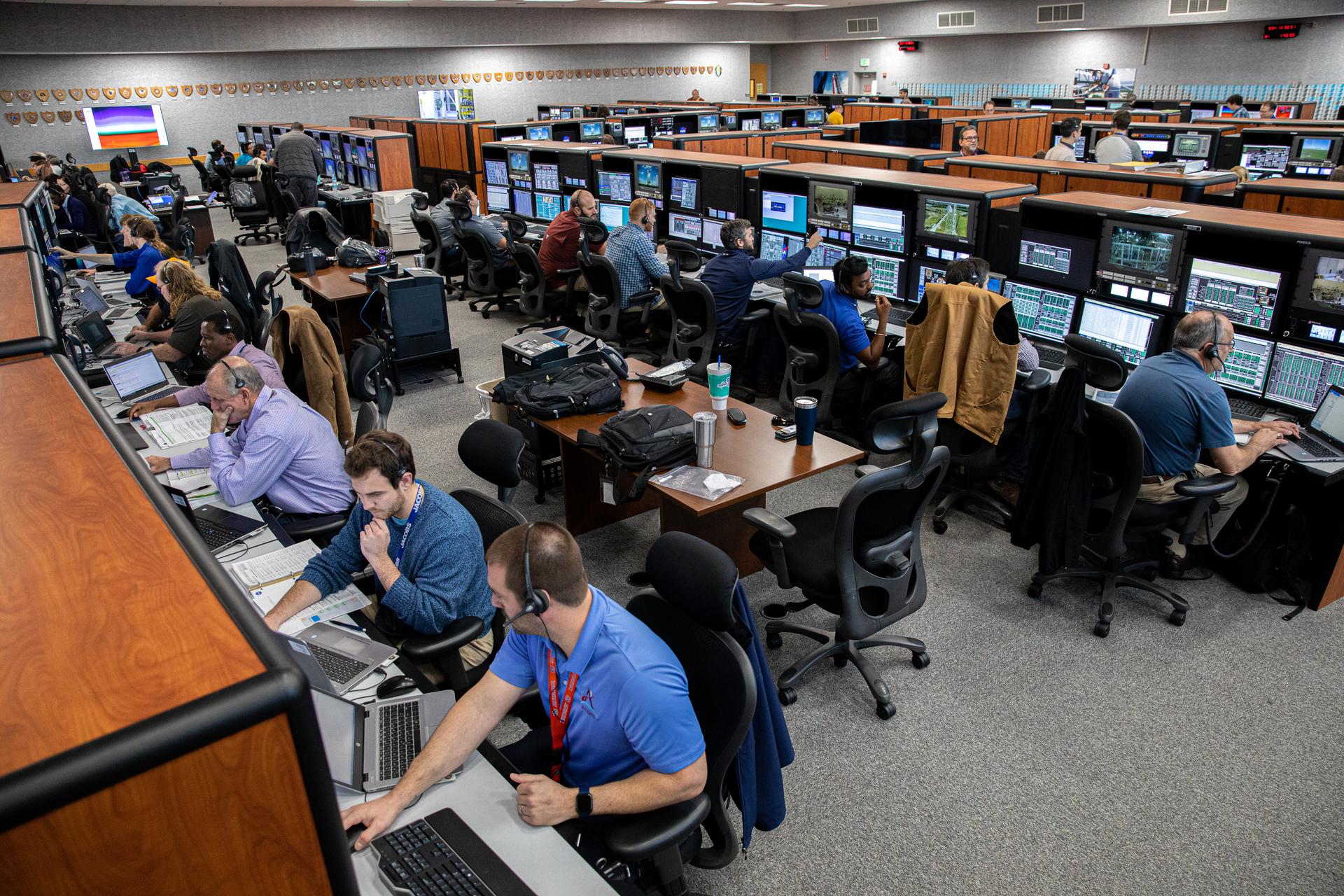 Artemis 1 launch team members seated at their consoles during a countdown simulation in Firing Room 1 on 3 February 2020. (Credit: NASA/Kim Shiflett)

These issues are devised by an independent simulation team — a small group who plans the anomalies and situations and when to “introduce” them in the count to the launch team.

While the Launch Director and NASA Test Director have some input on the types of issues to throw at their team, they too are kept in the dark — as they would be on launch day — of the specific issues and timing of those issues the sim planners will actually give them.

The launch team must then solve the issues in real-time with a ticking clock to meet the simulated launch window.

“Each time you do a sim, you learn something and grow as a team,” added Blackwell-Thompson.

Moreso, the sims allow the team to find actual issues with ground systems and software.

According to NASA, occasionally, an anomaly pops up that’s not engineered by the sim team.  When an actual problem is uncovered, managers and controllers will document it and collect any beneficial data to help understand and resolve the issue after the simulation. 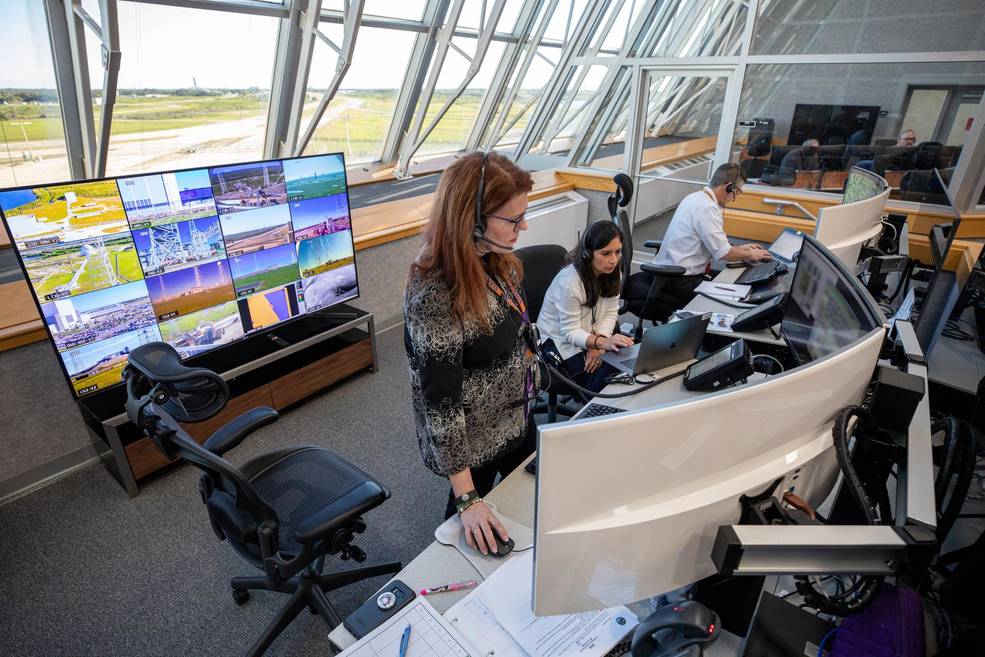 If necessary, a “sim anomaly” will be declared so the launch team knows it’s a real issue and not part of the exercise.

Once a sim is complete, the team remains on console to debrief on the day’s events and discuss any issues they have with how the sim unfolded or that they personally encountered.

“We do a team debrief on the net and talk every problem, what we did well, what we need to improve upon, and any changes to procedures or requirements,” Blackwell-Thompson said.

All of this will help the team be in top shape for the first launch of SLS and Orion on their uncrewed Artemis 1 test flight — which NASA is now publicly confirming will not happen this year.

The 20 February 2020 NASA press release regarding the KSC launch team’s performance of Artemis 1 countdown and launch simulations was the first NASA release to publicly confirm SLS will not fly this year, noting “NASA is preparing for the first uncrewed flight test next year of the agency’s powerful new rocket and spacecraft in development for the Artemis lunar exploration program.”

The previous NASA-provided No Earlier Than (NET) November 2020 launch date of Artemis 1 was always viewed as political in nature and not an accurate reflection of the rocket’s readiness.

To this end, the Kennedy Space Center is now actively planning for a NET 18 April 2021 launch, and the Marshall Space Flight Center in Huntsville, Alabama, has been given direction from mission planners to begin developing trajectory data for Launch Period 7, stretching from 18 April to 4 May 2021.

Trajectory analysis for Launch Period 7 has not yet begun and, according to the Flight Readiness Analysis Cycle, will not begin until July 2020.

At Kennedy, realigning to this new NET launch date includes shifting timelines for the rocket’s constituent component arrivals as well as stacking operations in High Bay 3 of the Vehicle Assembly Building.

At present, only the Interim Cryogenic Propulsion Stage provided by United Launch Alliance for Artemis 1 is at the Kennedy Space Center and in storage awaiting stacking.

The twin, five-segment Solid Rocket Boosters which have been completed and ready for shipment for well over a year at this point are in storage in Promontory, Utah, awaiting a NASA “need” date in Florida.

Thermal-Vacuum testing complete! Orion spent 6 weeks in vacuum subjected to temperatures ranging from -250 to 300-degrees Fahrenheit to simulate flying in-and-out of sunlight and shadow on the way to the Moon. Next up: electromagnetic interference tests! https://t.co/RBOU1PpuzY pic.twitter.com/e3NIyXvhyg

Orion and its European Service Module are currently at Plumbrook in Ohio undergoing vacuum and thermal testing as well as electromagnetic interference evaluations.

Moreover, the gigantic Core Stage is currently at the Stennis Space Center in Mississippi preparing for its Green Run full-duration hot fire test.

NASA has not revealed a target date for that test, but NASASpaceflight understands Stennis is preparing for that full-duration hot fire test No Earlier Than August 2020.

As of early-January, the Core Stage was not expected to arrive at the Kennedy Space Center from Stennis until January 2021.

Moreover, internal NASA discussions for several months now have revolved around a Spring or Summer 2021 launch campaign for Artemis 1 — with numerous centers discounting any realistic possibility of SLS launching in 2020.

Most of those notes continue to indicate a Summer 2021 “realistic” launch timeline, but make clear NASA has not given up on the Spring opportunity — which would match Marshall now receiving direction for launch and lunar trajectory planning for the 18 April to 4 May 2021 time frame.

Arianespace begins stacking Vega ahead of March Return To Flight