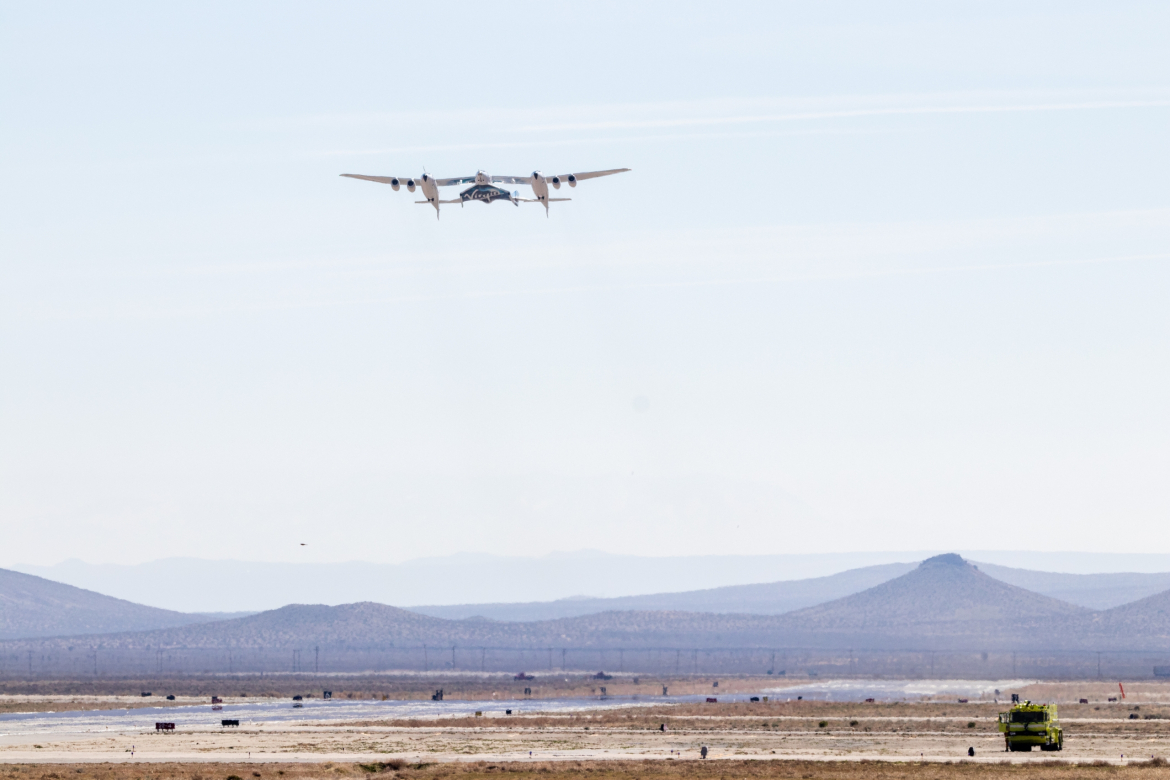 Carried by her mothership VMS Eve, Virgin Galactic’s VSS Unity has arrived at Spaceport America in New Mexico. The move from Mojave, California, signals the beginning of the end of SpaceShipTwo’s test campaign, moving ever closer to operational missions for paying customers.

The WhiteKnightTwo carrier aircraft and SpaceShipTwo spaceplane departed Mojave Air and Space Port on Thursday, conducting testing over California before turning east for the journey to New Mexico.

Mojave has been VSS Unity’s home since it began flight testing in 2016. The rigorous test campaign included four captive carry flights under VMS Eve that year, followed by seven glide flights from 2016 to 2018.

On April 5, 2018, VSS Unity fired its engine for the first time, conducting a powered flight up 25.7 kilometers in altitude. The flight was also the first time VSS Unity went supersonic, reaching a speed of Mach 1.87, or 1.87 times the speed of sound. 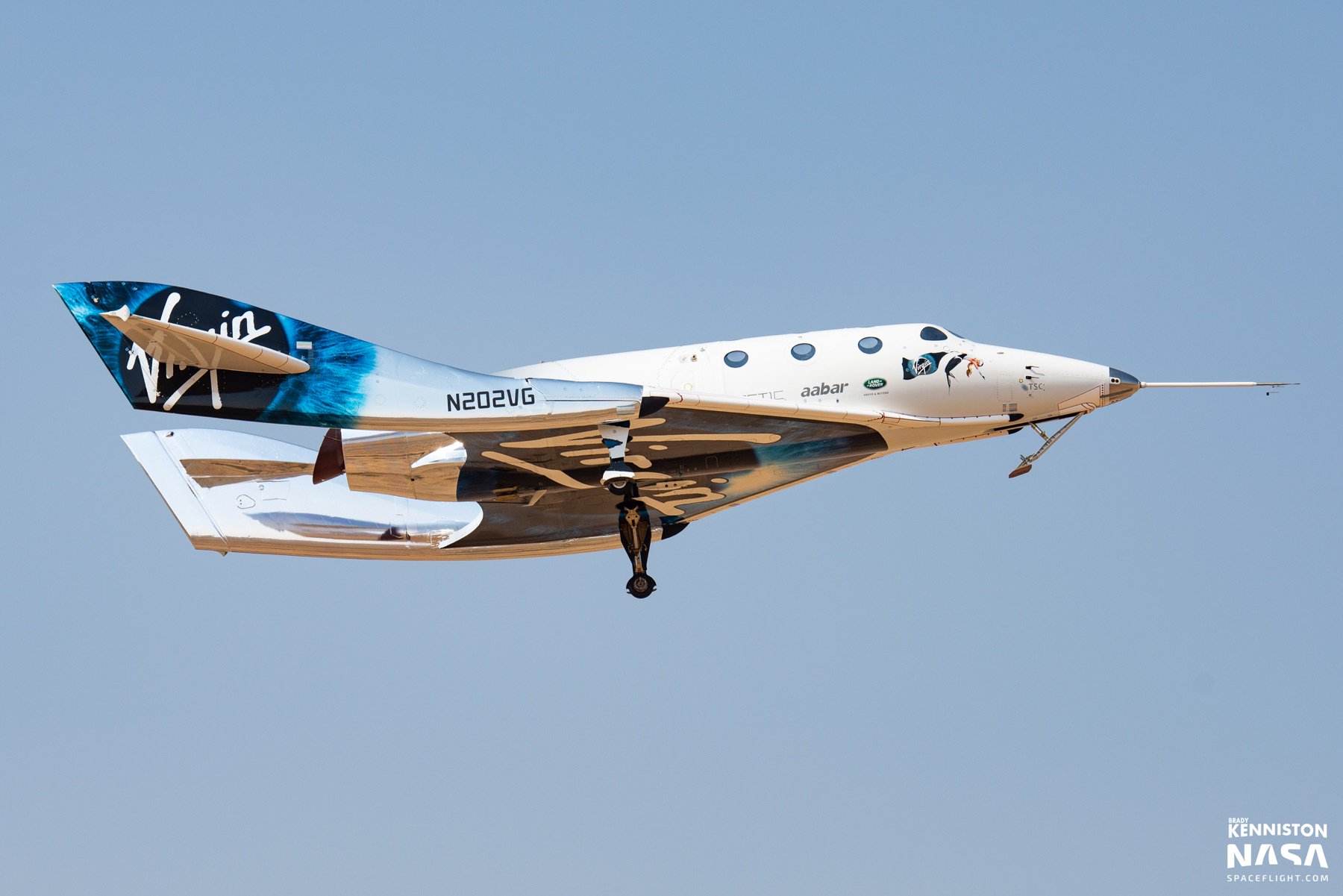 The fourth powered flight on December 13, 2018, accomplished the long-awaited goal of Virgin Galactic’s first trip to space. VSS Unity reached an altitude of 82.7 km, above the American definition of space’s boundary with Earth’s atmosphere at 80 km, and reached a peak speed of Mach 2.9.

The spacecraft’s crew, pilot Mark Stucky and Space Shuttle veteran Frederick Sturckow, became the first people to launch above 80 km from the United States since the final Space Shuttle mission in 2011.

VSS Unity made its second spaceflight, and most recent flight, on February 22, 2019. The vehicle was flown by pilots David Mackay and Michael Masucci, and reached an apogee of 89.9 km and a speed of Mach 3.04. Also on board was Virgin Galactic’s Chief Astronaut Instructor Beth Moses, who became the first person to fly as a passenger aboard SpaceShipTwo.

Just under a year later, VSS Unity has not made another flight since. That may soon change, however, now that the spaceplane is at its operational base at Spaceport America. The remainder of VSS Unity’s test flights will occur from New Mexico, followed by flights for paying customers and scientific research experiments. 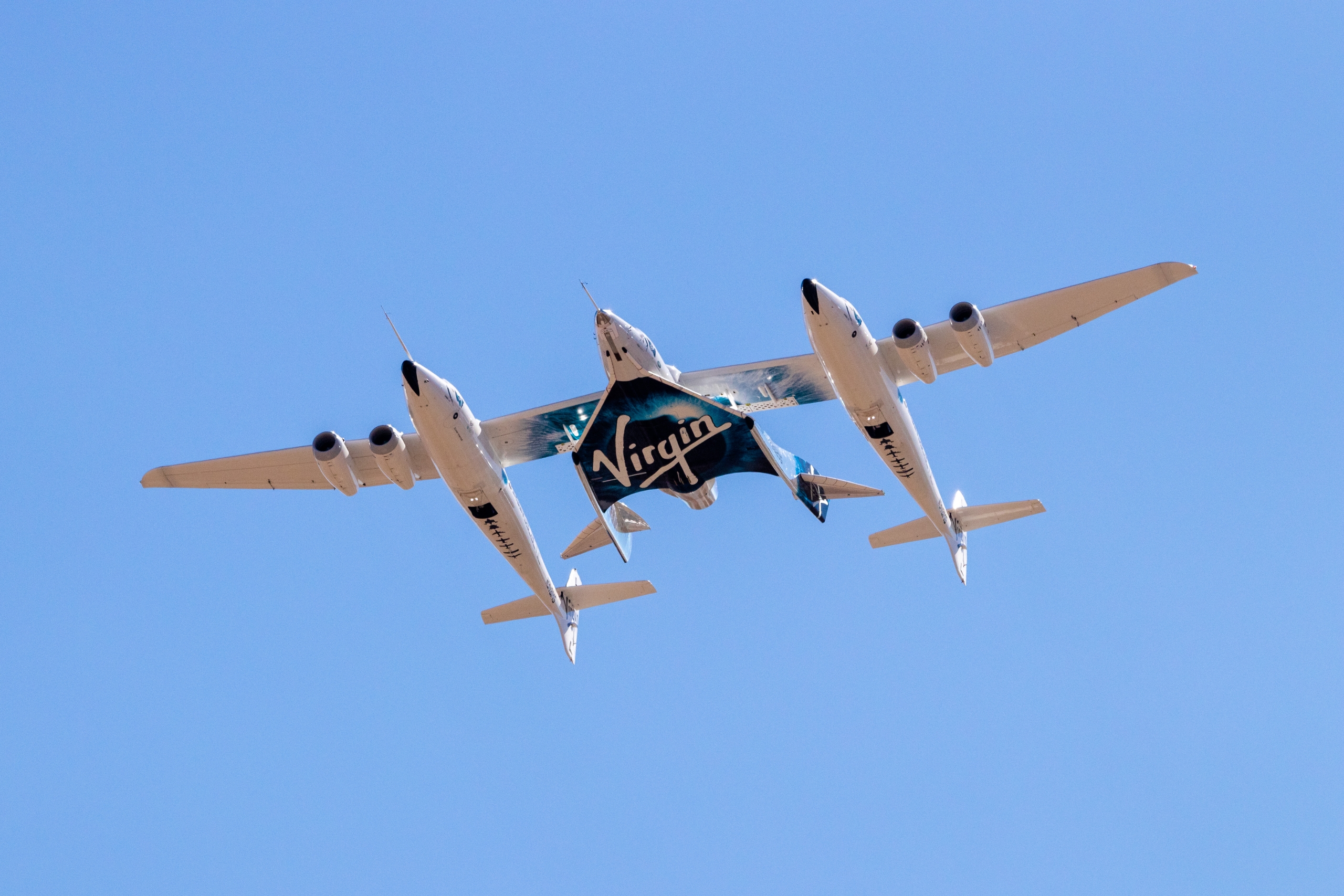 Virgin Galactic is not leaving Mojave. Their wholly-owned subsidiary, The Spaceship Company, will continue to construct and test SpaceShipTwo spacecraft and WhiteKnightTwo motherships prior to delivering them to New Mexico. Virgin Galactic share the spaceport with their sister company Virgin Orbit and their LauncherOne program, as well as Stratolaunch’s Roc aircraft and Northrop Grumman’s Pegasus-launching Stargazer.

Moving closer to commercial operations in New Mexico means building additional SpaceShipTwo and WhiteKnightTwo vehicles in Mojave. The Spaceship Company has now assembled all of the major structural elements of the next SpaceShipTwo spacecraft. A series of major build milestones culminated in the “Weight on Wheels,” when the spacecraft deployed its landing gear and supported its own weight for the first time. 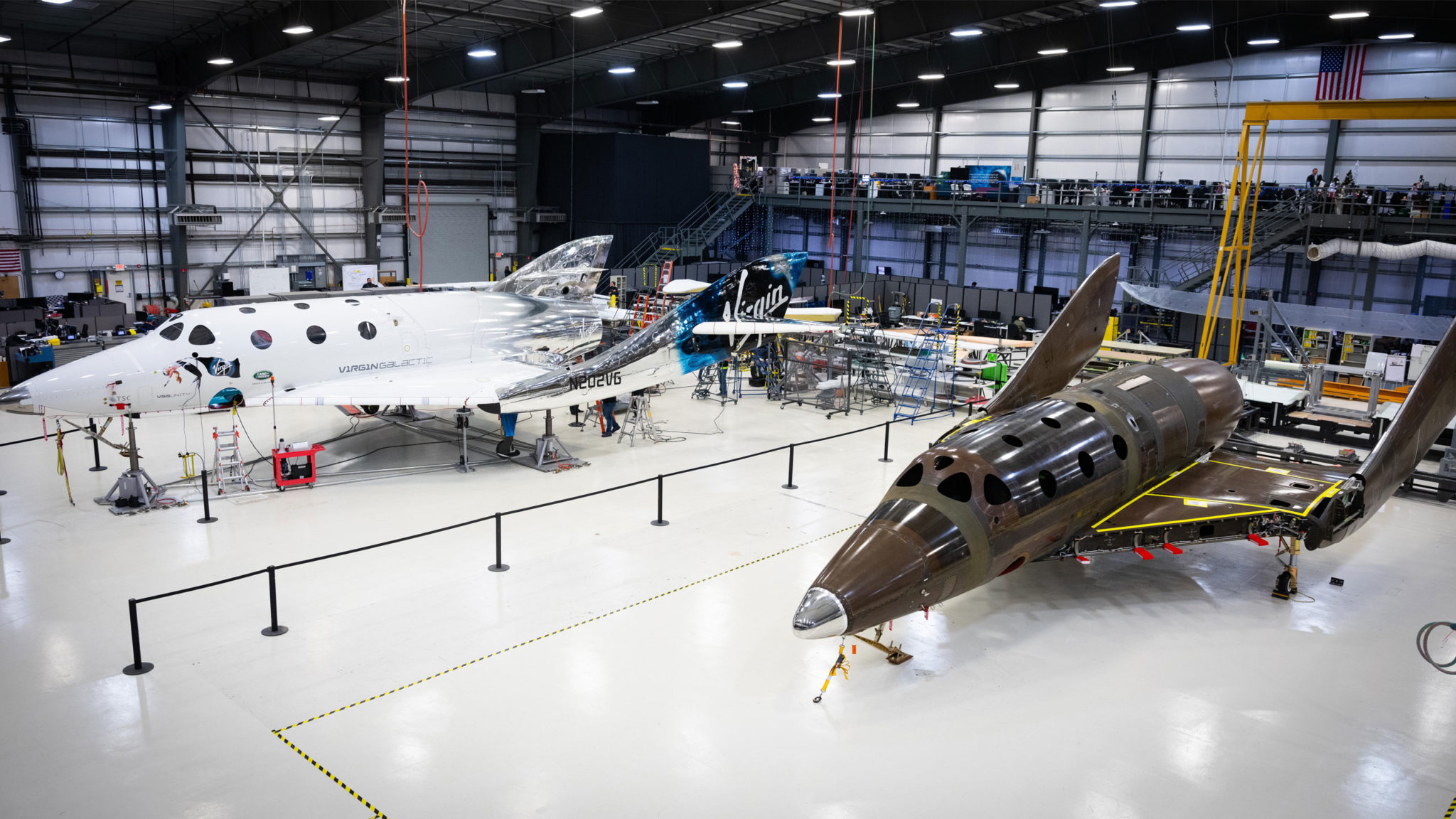 The next SpaceShipTwo vehicle resting on its own landing gear for the first time, next to VSS Unity in Mojave – via Virgin Galactic

This milestone was reached faster than with VSS Unity, thanks to more efficient manufacturing and assembly processes, as well as experience from building previous spacecraft. The newest vehicle, yet unnamed, is the third SpaceShipTwo built, after the ill-fated VSS Enterprise and the space-flown VSS Unity.

The new spacecraft will now undergo final structural closeouts and the connection of its flight control systems. These steps are a precursor to integrated ground testing and eventual flight tests, to be conducted in Mojave.

A third member of the fleet, and the fourth SpaceShipTwo ever, is also under construction. Over half of the parts for that vehicle have been fabricated.

Partnerships with Investors and Customers

While SpaceShipTwo vehicles are being constructed and conducting flight tests, Virgin Galactic has been securing partnerships to support its commercial operations. $20 million in investments from Boeing’s HorizonX Ventures organization are aimed “to broaden commercial space access and transform global travel technologies.” 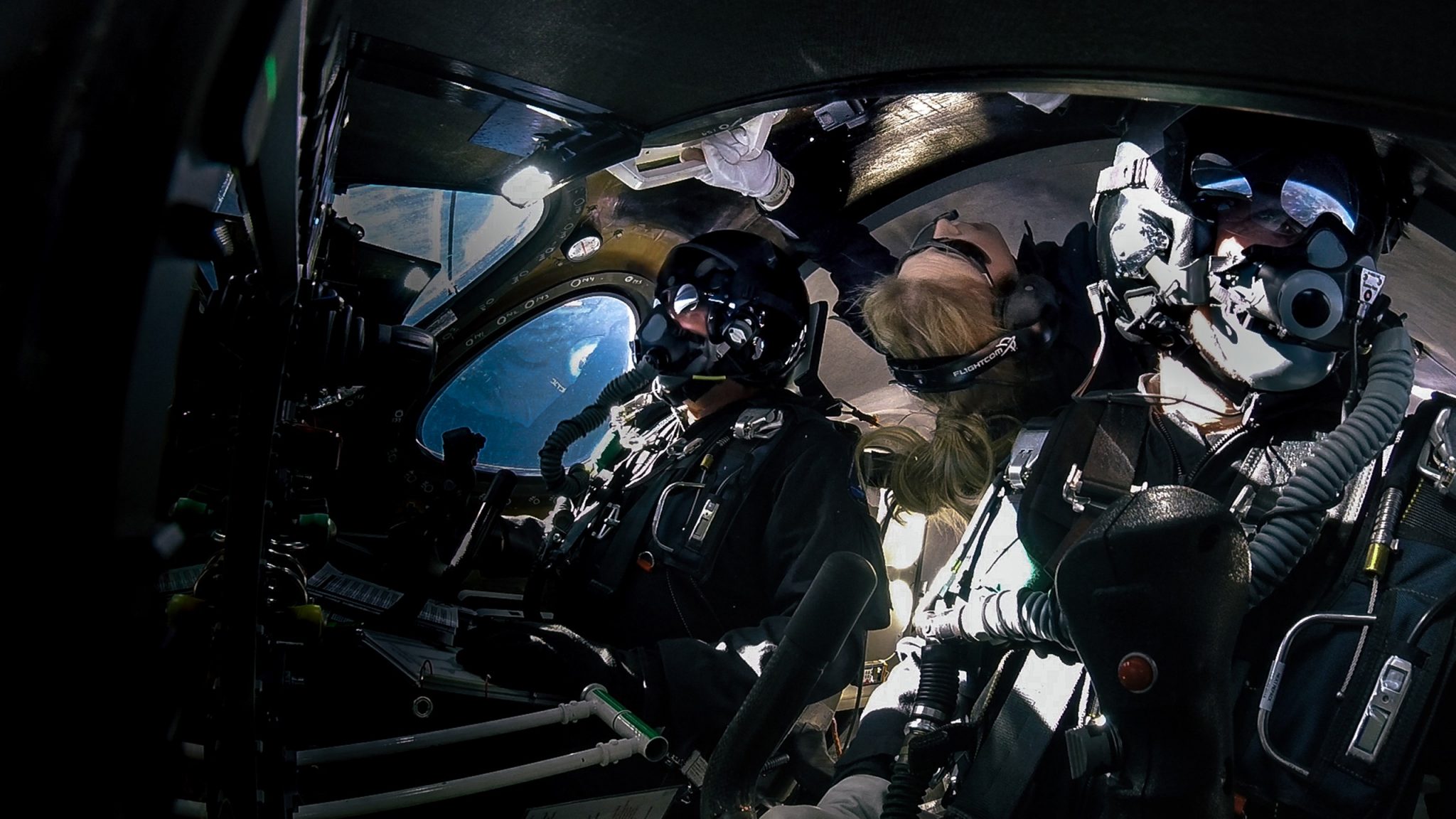 David Mackay, Michael Masucci, and Beth Moses aboard VSS Unity on its second spaceflight in February 2019 – via Virgin Galactic

Virgin Galactic has also signed a contract with the Italian Air Force for a crewed research flight. Three Italian payload specialists will conduct a number of research experiments during a suborbital spaceflight aboard SpaceShipTwo.  The crew will leave their passenger seats after engine shutdown and complete the experiments during several minutes of weightlessness.

The payloads are being designed by the Italian Air Force, Virgin Galactic, and the Italian National Research Centre. Topics of study include medical instrumentation to measure the biological effects of microgravity on the human body, and tests to help understand the chemistry of environmentally friendly fuels.

The mission is scheduled to fly as early as 2020, following the completion of VSS Unity’s flight testing at its new home in New Mexico.