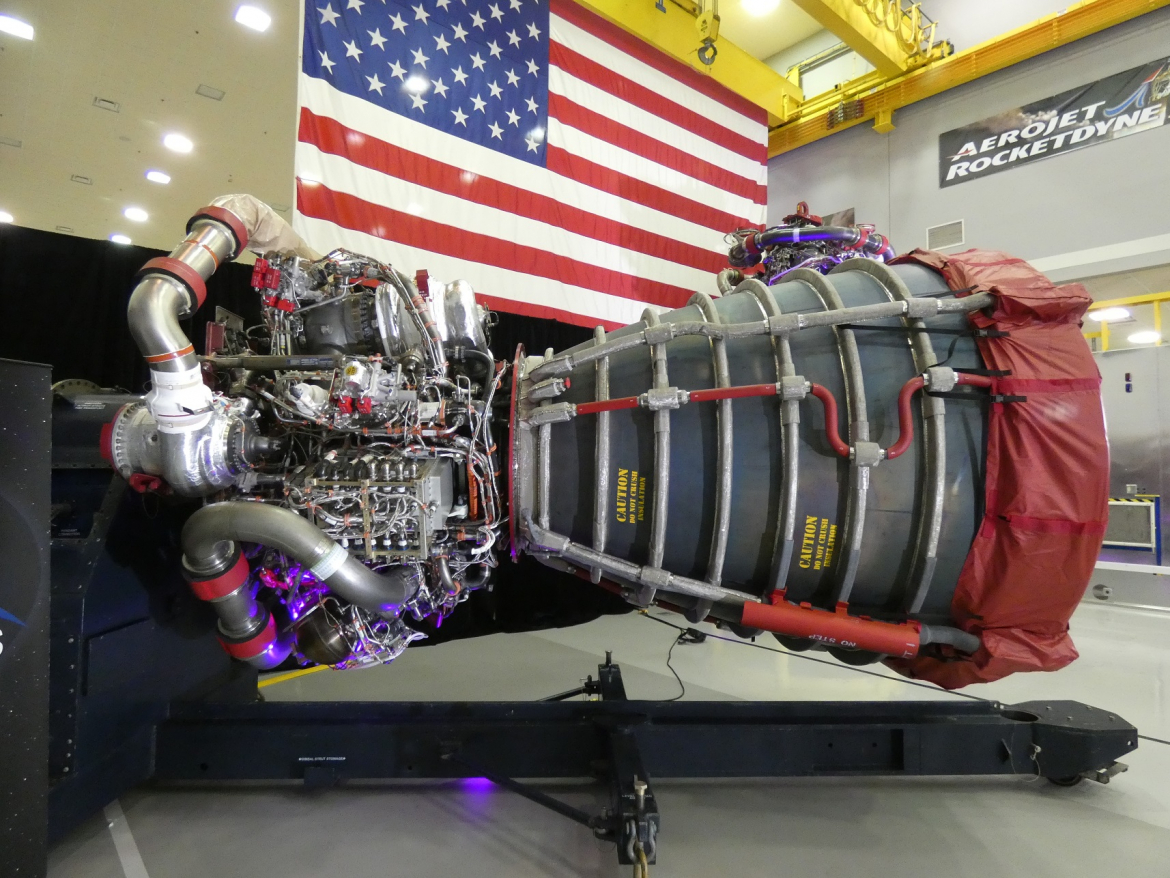 Aerojet Rocketdyne (AR) is delivering new RS-25 rocket engine hardware from its U.S. facilities to certify its new production process and is getting ready for the next phase of testing.  More than a decade after production was discontinued, the engine maker is setting up assembly lines for major engine components at facilities in California and Florida and working towards delivery of six new flight engines for NASA’s Space Launch System (SLS).

UPDATE: On May 1, Aerojet Rocketdyne were awarded a further $1.79 billion to add another 18 new engines.

The parts will be shipped to the AR facility at NASA’s Stennis Space Center in Mississippi, where the engines are fully assembled in and subsequently test-fired in the nearby, single-engine A-1 Test Stand. The second of four series of development test-firings is scheduled to begin in June on a ground test engine currently being retrofitted with over half of its major components constructed using modern manufacturing methods.

In addition to restocking engines for the expendable SLS Core Stage, a primary goal of the production restart program is to deliver new units of the high-performance engines for less cost while maintaining the reliability of the Space Shuttle Main Engine (SSME) design. While Aerojet Rocketdyne is re-establishing a production line to deliver new engines, they are also supporting the critical, first-time tests of the SLS Core Stage mounted in another test stand at Stennis.

Development engine 0528 (E0528), one of two Space Shuttle Program ground test engines inherited by NASA’s SLS Program, is being reassembled for a series of about a dozen hot-fire tests scheduled to begin in the middle of the year.

“Retrofit 2, that’s scheduled to start in June,” Doug Bradley, RS-25 Deputy Program Director for Aerojet Rocketdyne, said in a February 20 interview at their Canoga Park facility in the Los Angeles area. Bradley was formerly the “Chief of Chiefs,” the Chief Engineer of AR’s Advanced Space and Launch Systems business unit.

The upcoming Retrofit 2 test series is the second of four sets of test firings that will help certify that AR’s new manufacturing process produces new engines with the same form, fit, and function as the existing engines, which were originally built one to two decades ago. When the hot-fire series begins over half of the major components on E0528 will be new engine parts.

“There are seventeen new build/design components or assemblies to be tested and are all on the cert (certification) engine,” Bradley noted in a follow-up email. “There are actually more individual parts than that, but we categorize ducts, harnesses, etc. into groups.” 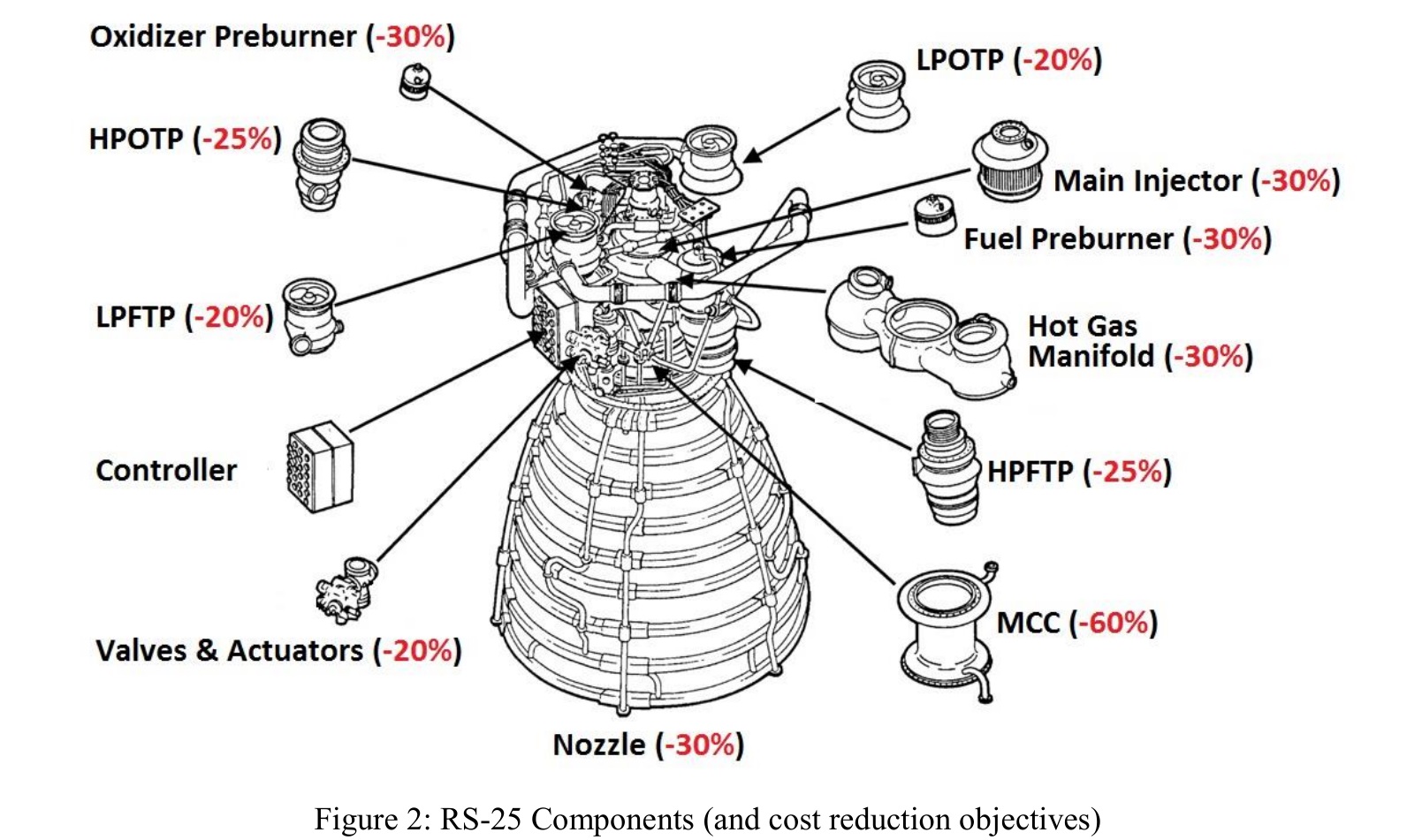 (Photo Caption: Several of the major RS-25 components along with their production restart cost reduction targets from a NASA presentation. Aerojet Rocketdyne is producing the components of new engines; the first parts are being used for the early phases of certification testing, followed by an all-new certification engine and six new flight engines.)

“The flight engines will be the same as the certification engine. Retrofit 3 engine has all changes except for the powerhead which only needs one certification series to be certified for flight. Retrofit 2 has nine of seventeen new parts and Retrofit 1 had two new components.”

Second units of a pogo accumulator assembly that is now 3-D printed and a main combustion chamber (MCC) using hot isostatic press (HIP) bonding to assemble its jacket and liner are being installed on E0528; those pieces were first tested in the Retrofit 1 series that ran from the end of 2017 to early 2019. Retrofit 2 brings in a larger set of major engine components to begin recertification testing, with new turbopumps, actuators, and instrumentation being retrofitted to E0258 after coming off restarted assembly lines.

“We just progressively get more and more hardware in there until finally the certification engine has got everything, it’s a full-up design,” Bradley explained. “But the Retrofit 3 is most everything as well.”

From 2015 to 2017 NASA and AR certified that the reusable Shuttle SSMEs, coupled with a new engine controller designed and built by Honeywell, can fly one last time on the expendable SLS under the inline rocket’s more demanding operating conditions. Rebranded as RS-25 “adaptation” engines, certification testing predominantly using the two ground test engines was completed with an acceptance test of flight engine E2063 in October, 2017.

Following that test, Aerojet Rocketdyne moved into testing the first parts using production restart manufacturing methods beginning in December, 2017. The Retrofit 1 test series was split into two halves called Retrofit 1a and 1b; Retrofit 1a first tested the 3-D printed pogo accumulator integrated with Shuttle-era hardware on E0528 and then Retrofit 1b tested the first new HIP-bonded MCC on E0525 bringing the pogo accumulator over to that engine.

The final Retrofit 1b test in late February, 2019, ran E0525 in a flight-equivalent eight-minute long test throttled at 113 percent of the original 1970s Shuttle rated power level (RPL) where 100 percent was 375,000 pounds of thrust at sea level and 470,000 pounds of thrust at vacuum. The first SLS launches that use adaptation engines will typically use a 109 percent RPL power setting, production restart engines will be throttled to 111 percent RPL, and for ground certification tests the development engines are run for periods at 113 percent RPL to demonstrate that the design and the hardware can safely and reliably operate with additional margin above the maximum power setting in flight.

The most recent single engine test was an acceptance firing of the final unflown adaptation flight engine; E2062 is scheduled to fly on Artemis 2 and following the test in April, 2019, it was refurbished and put into storage at Stennis. 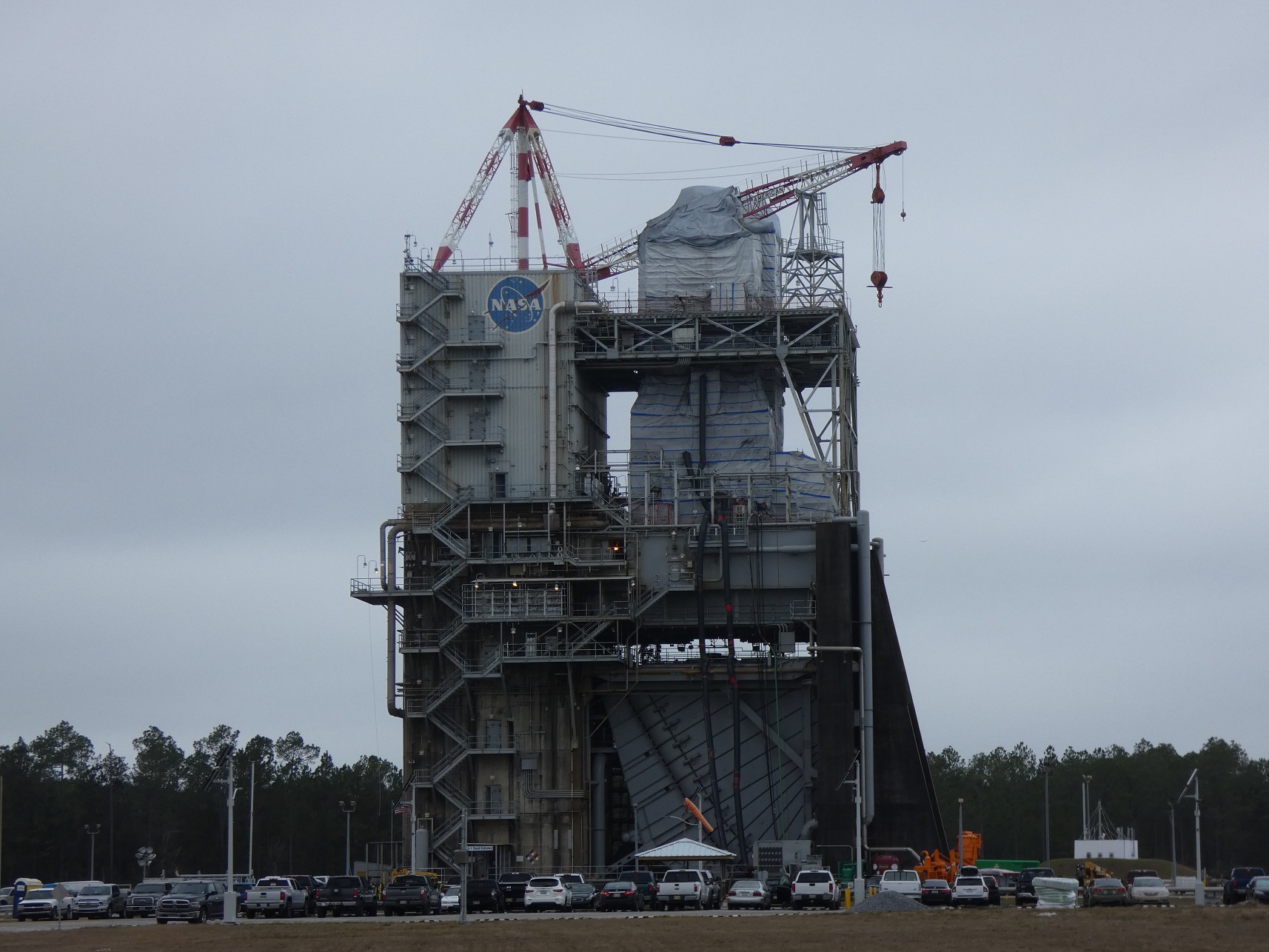 (Photo Caption: The A-1 Test Stand at Stennis Space Center on February 10. The propellant run-tanks were bagged for corrosion removal and repainting, one of the refurbishment projects going on there before single-engine RS-25 testing is scheduled to resume in June.)

The single-engine tests will resume in the A-1 Test Stand after over a year of inactivity. NASA took advantage of the planned testing downtime to perform maintenance work on the A-1 stand’s infrastructure.

“We’re doing a major refurb project on the run tanks,” Chip Ellis, NASA’s RS-25 Test Program Manager at Stennis, said in early February. “We don’t get a lot of opportunities because of the testing schedule where we can go in and do long modifications.”

“They were in dire need of a new paint job, get corrosion off of them, and we’ve had a down period here where we had enough time to go do that.” The single-engine test stands have their own propellant storage tanks and plumbing to stand in for a rocket stage; those were bagged for the refurbishment work.

“That’s all contained with a negative pressure vacuum system,” Ellis noted. “They’re blasting all the old paint off; the old paint was done back in the Sixties so it had hazards in it so we’re taking all the old, hazardous paint off, putting new paint on and so for our next test we’ll have bright, shiny new run tanks there.”

“We’ve got all kinds of small projects going on, that’s our largest project,” Ellis added about the A-1 stand maintenance. “The flame bucket deflector, we have a lot of lines that feed all that water to it, we’re going in and replacing all of those right now as one of our major projects going on.”

“From our gas house which is over on that side of the center we pipe high-pressure gas over to the stand, we’re reworking all of that so we’ve taken advantage of this downtime where we can go upgrade the systems that don’t get a chance to get upgraded a lot.”

The Aerojet Rocketdyne facility in California is located in the Los Angeles metro area in Canoga Park. The workplace was relocated in 2014 from its original, larger facility in another part of the city prior to several aerospace industry downsizing and merger periods.

“We used to build engines in the old factory here,” Bradley said. “At one point in time we were building engines at Stennis, KSC, and here, and that wasn’t real efficient.” Today, Canoga Park builds and assembles most of the engine components, but they are shipped to Stennis for final assembly and acceptance testing before delivery for vehicle integration.

“The big parts we call them welded assemblies because they’re basically welded up together,” Bradley explained. “A lot of our bolted assemblies we will get from suppliers; actuators, for instance, the hand that moves the valves they are made by Honeywell.”

“We have valves where we make some of the parts here and others other places. It’s really a different mix of what parts we get from suppliers, what parts we get from here. Our ducting, there’s ducts, that’s how the flow gets where it needs to go, so small lines and ducts, most of those we’ll make outside, we’ll have suppliers make those outside.”

Some of the RS-25 turbopumps are assembled at AR’s West Palm Beach, Florida, facility before being sent to Stennis for integration. “The major pieces are nozzles, MCCs, powerheads, those are real big pieces,” Bradley said.

“We have two low-pressure pumps, two high-pressure pumps, most of that hardware is made by suppliers but then we do assemble those, some at Stennis and some at West Palm Beach. Then there’s actuators, Honeywell actually makes them for us. Our controller, Honeywell makes that. Harnesses, running gear, the lines, that of kind of stuff, we’ll buy that but then all those pieces go to Stennis and they put all those pieces together. And they test it there.” 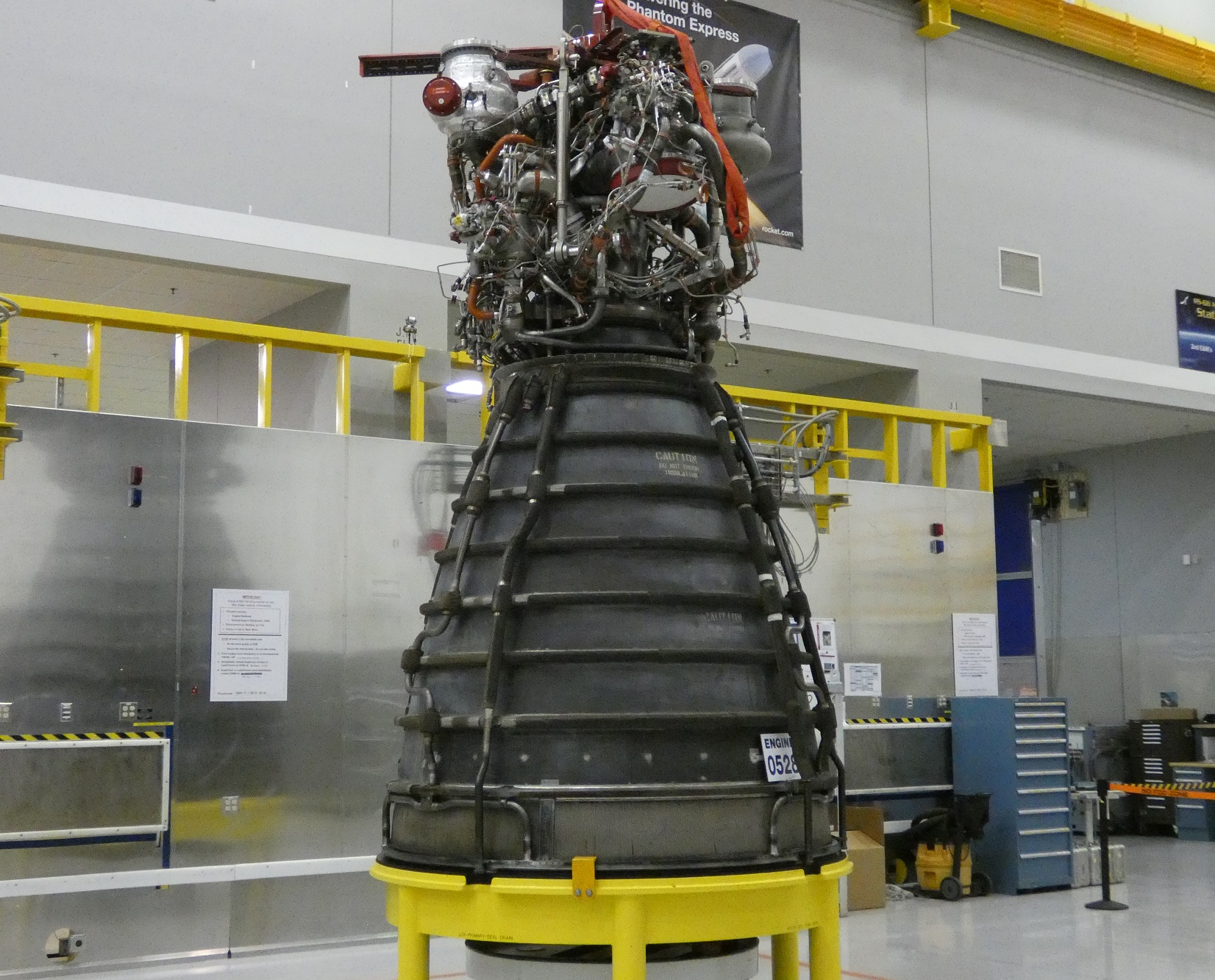 (Photo Caption: The partially disassembled development engine 0528 as seen at AR’s Stennis facility in July, 2018. The engine supported the Retrofit 1a series which tested the first 3-D printed pogo accumulator assembly. It is now being reassembled to support the Retrofit 2 series with about half of its major components replaced with newly-produced engine hardware.)

The goals of the production restart program are to re-establish the RS-25 production line and supply chain and to do so in a more cost-effective manner than for SSME units. By using modern techniques already developed in other engine programs, it is hoped to reduce the cost to build new engines and the time it takes to field them.

“That’s what we’re concentrating on, affordability,” Bradley said. “In the Shuttle days it was all reliability — you know you’re using them twenty-two times and they would become really cheap — so it was all about making them more reliable. We were successful and so now that we’ve got that reliability we want to maintain that and work on producibility.”

The new manufacturing methods, such as additive manufacturing (also known as “3-D printing”), allow engine designers to consider different approaches for clean sheet designs, but in the case of the SSME/RS-25, the intent was to maintain the existing design with its known reliability and extensive testing history.

“For the restart we took a challenge, thirty percent [cost reduction],” Bradley explained. “That’s a big chunk of the cost but we’re not going to sacrifice reliability so in order to do that you know your design is going to look similar.”

“Whatever seems reasonable for a reasonable amount of tests, ‘OK how much of a change can you make?'” he added. “That’s why this is a rather modest cert series and we’re getting one or two tests, we’re certified, instead of ten test series or something. In the Shuttle days we had some pretty onerous test series to certify that hardware. We tested like crazy.”

The SSME/RS-25 engine family accumulated over 1.1 million seconds of run-time across over 3200 starts between ground testing and Space Shuttle launches. In contrast to the two development engines (E0528 and E0525) used at the end of the Shuttle Program through today, SSME used a total of sixty-one development engines, some with up to sixty ground “hot-fire” tests. Fifty-one engines flew on Shuttle flights, with fleet leader E2012 flying twenty-two times.