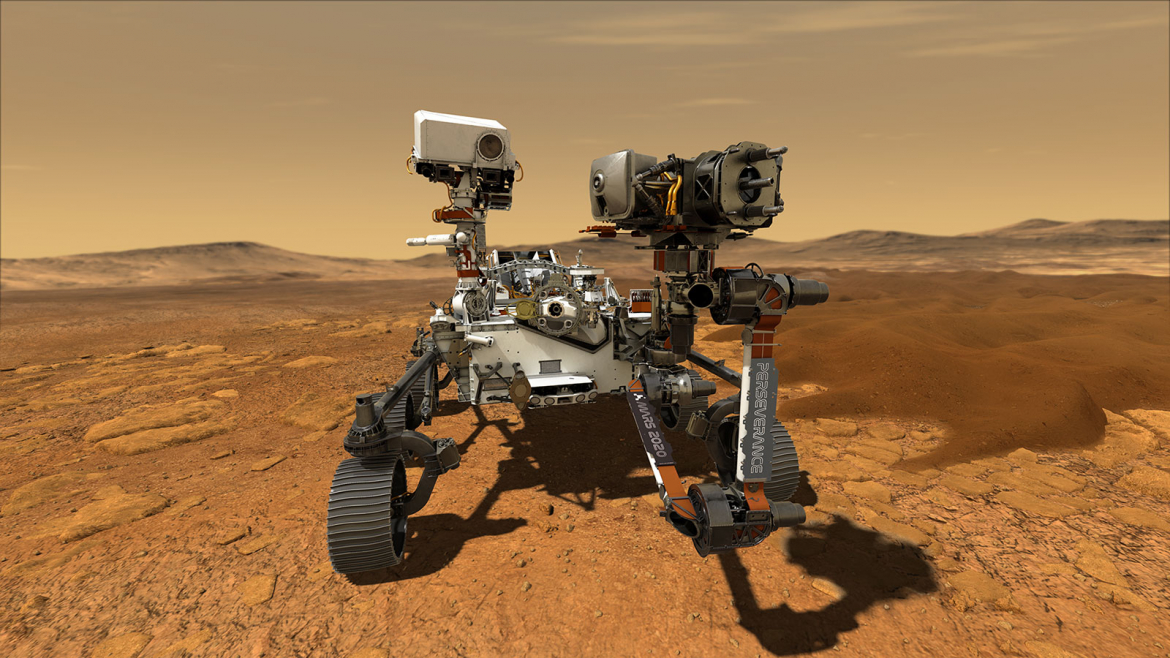 NASA has named its Mars 2020 rover, “Perseverance,” as it prepares for launch this summer. The name is a result of a nationwide contest, which accepted more than 28,000 essays from K-12 students, and pays tribute to continued exploration of the extremely challenging environment of the red planet.

The rover is currently at the Kennedy Space Center in Florida. It made the trip from the Jet Propulsion Laboratory to March Air Force Base in California, where it boarded a United States Air Force C-17 cargo aircraft for the trip to NASA’s Launch and Landing Facility, formerly known as the Shuttle Landing Facility. The spacecraft is currently undergoing processing in the Payload Hazardous Servicing Facility. 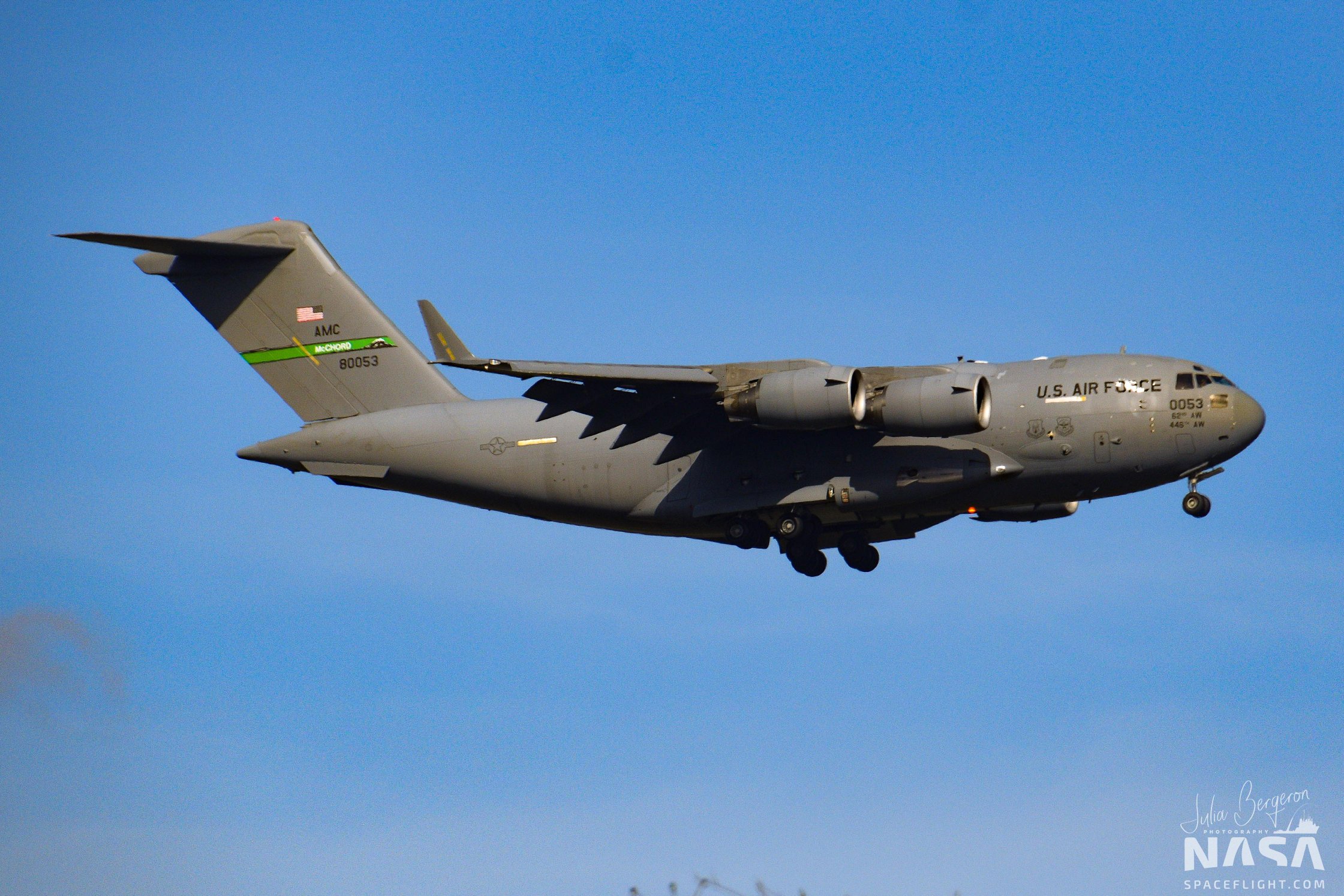 The rover joined the heat shield and back shell, collectively referred to as an aeroshell, which arrived at the Kennedy Space Center from Lockheed Martin Space in Colorado in December 2019. Throughout January, teams have performed testing of the aeroshell, reaching milestones that included center of gravity and moments of inertia measurements, as well as lift activities within the Payload Hazardous Servicing Facility.

When Perseverance makes its voyage to the red planet, it will bring another vehicle with it. For the first time, NASA will attempt to demonstrate heavier-than-air flight in the Martian atmosphere.

The Mars Helicopter flight demonstration is an autonomous, 1.8 kilogram helicopter, which will be deployed from Perseverance to the Martian surface after landing. As a technology demonstrator, the vehicle carries no scientific instruments, only a single high resolution color camera. NASA hopes the helicopter will overcome Mars’ thin atmosphere and long communications delays to Earth in order to prove flight on Mars is viable. A successful demonstration would pave the way for future vehicles carrying scientific equipment. 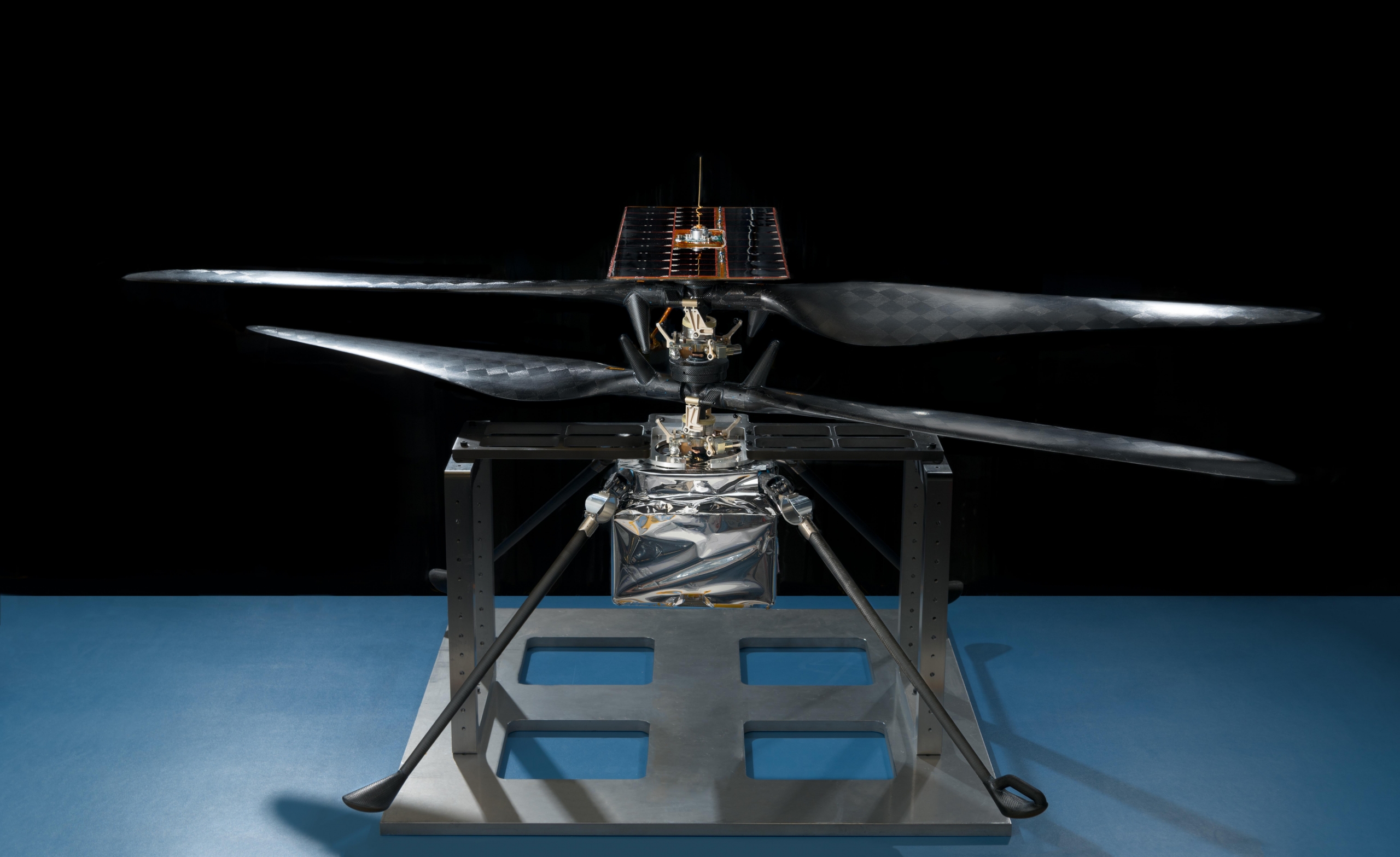 The Perseverance rover and the helicopter will launch together aboard a United Launch Alliance Atlas V rocket this summer. Liftoff from Space Launch Complex 41 (SLC-41) at the Cape Canaveral Air Force Station is currently scheduled for no earlier than 9:00 AM EDT (13:00 UTC) on July 17.

The AV-088 Atlas V rocket will fly in the 541 configuration, with a 5 meter diameter payload fairing, 4 solid rocket boosters, and a single RL-10 engine on the Centaur upper stage. This is the same rocket configuration that launched the very similar Curiosity rover to Mars in 2011. 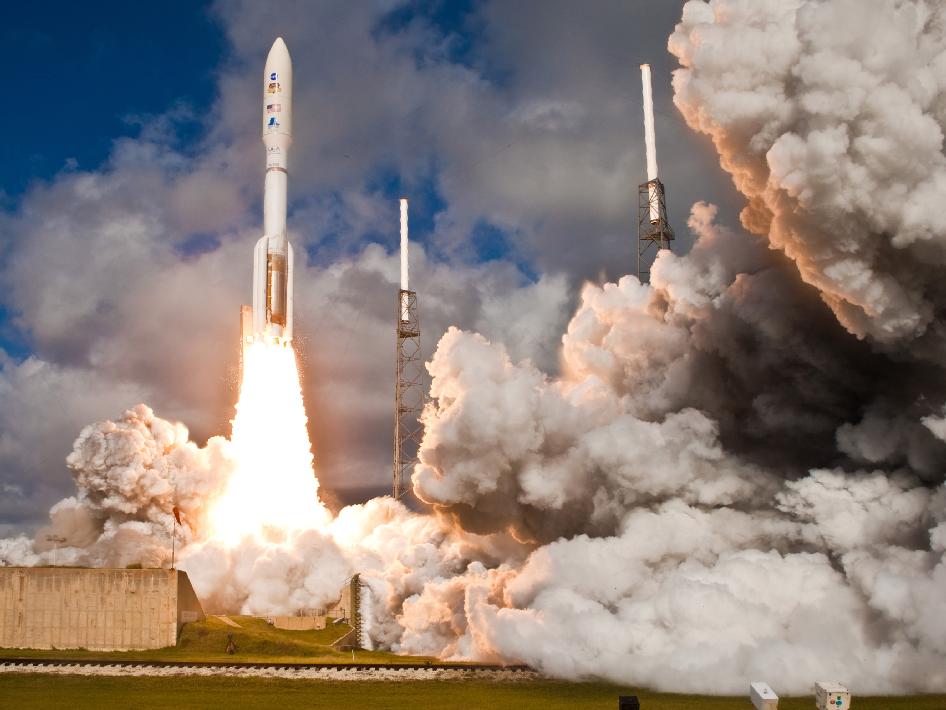 Atlas V launches Curiosity in 2011, using the same configuration which will launch Perseverance this year – via United Launch Alliance

After a seven month journey through interplanetary space, the rover is scheduled to land at Jezero Crater on February 18, 2021. NASA believes the crater was once home to an ancient river delta, which could have hosted organic molecules and other signs of microbial life. Landforms in the area are also estimated to be as much as 3.6 billion years old. Perseverance is planned to investigate these features on the Martian surface for at least one Martian year, or 687 Earth days.

NASA has been hoping to study this region of Mars for a long time, but believed landing at the site was too dangerous due to the high number of boulders present. Thanks to an upgraded vision system from Curiosity’s skycrane descent module, Perseverance will now be able to compare imagery captured during descent to maps stored onboard. The rover can then decide to divert to a secondary landing site with safer terrain if too many hazards are discovered at the primary landing site. This system was tested aboard a suborbital Masten Space Systems rocket in 2014.

Perseverance will join the Curiosity rover and InSight lander as NASA’s 3rd active mission on the surface of Mars. If successful, the mission will be NASA’s 8th successful Mars landing, and 5th Mars rover.

Perseverance is the name of the rover. pic.twitter.com/onH3fqofZN

Perseverance’s scientific instruments support a variety of scientific research goals. Assessing geological features, searching for signs of ancient Martian life, and characterizing the planet’s climate are all missions of the Perseverance rover. But NASA is also planning ahead towards even more ambitious exploration goals, and Perseverance is slated to play a key role.

A future mission to return samples of Martian rock and soil is currently under consideration by NASA, in partnership with the European Space Agency. Perseverance will identify and collect samples, and leave them at a designated location on the Martian surface in sealed tubes. A new spacecraft would land on the Martian surface and act as a launch facility to return the sample to Earth for in-depth analysis. This mission is currently in the conceptual phase. 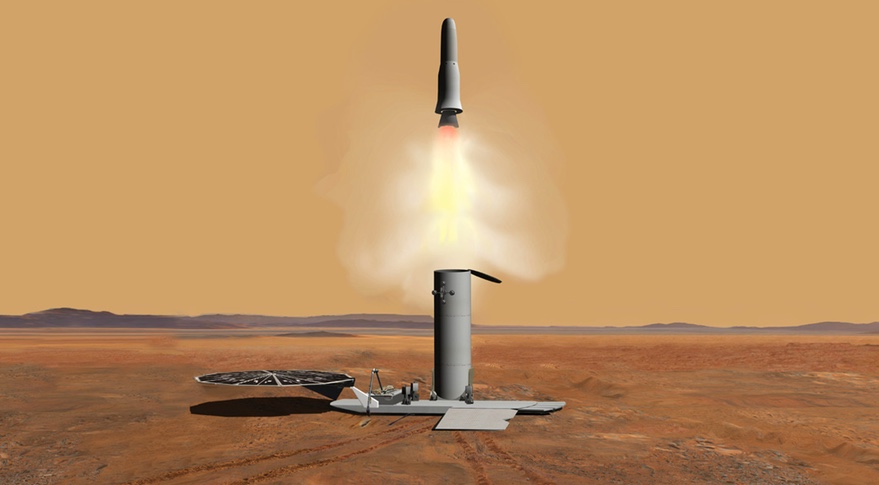 Other instruments aboard Perseverance look ahead further, to future human exploration of the red planet. Determining the habitability of the Martian environment and assessing natural resources and hazards for astronauts are at the core of Perseverance’s mission.

The rover’s payload consists of seven main instruments. One such tool is a next generation version of the Curiosity rover’s ChemCam, named SuperCam. The instrument uses a pulsed laser to vaporize small portions of rock into plasma, which is then analyzed by the camera to determine chemical composition. SuperCam will be utilized when a mineral deposit is unable to be reached with the robotic arm, or to identify target sites before deciding to drive the rover closer.

Particularly of interest are minerals formed in the presence of liquid water, such as clays, carbonates, and sulfates. The instrument features an upgraded artificial intelligence component from Curiosity to identify targets autonomously and point precisely at small rock features. This information will be used in identifying samples for potential return to Earth.

It also includes a microphone, which will be used to listen to the sound created by the laser hitting the target, in order to gain more information about molecular composition. The microphone element can also record the sounds of Mars’ atmosphere or the rover driving and moving its robotic arm. Two past attempts to land such a microphone on Mars failed, once aboard the Mars Polar Lander, which crashed on the Martian surface in 1999, and once on the successful Phoenix lander, when electronic issues prevented use of the microphone. 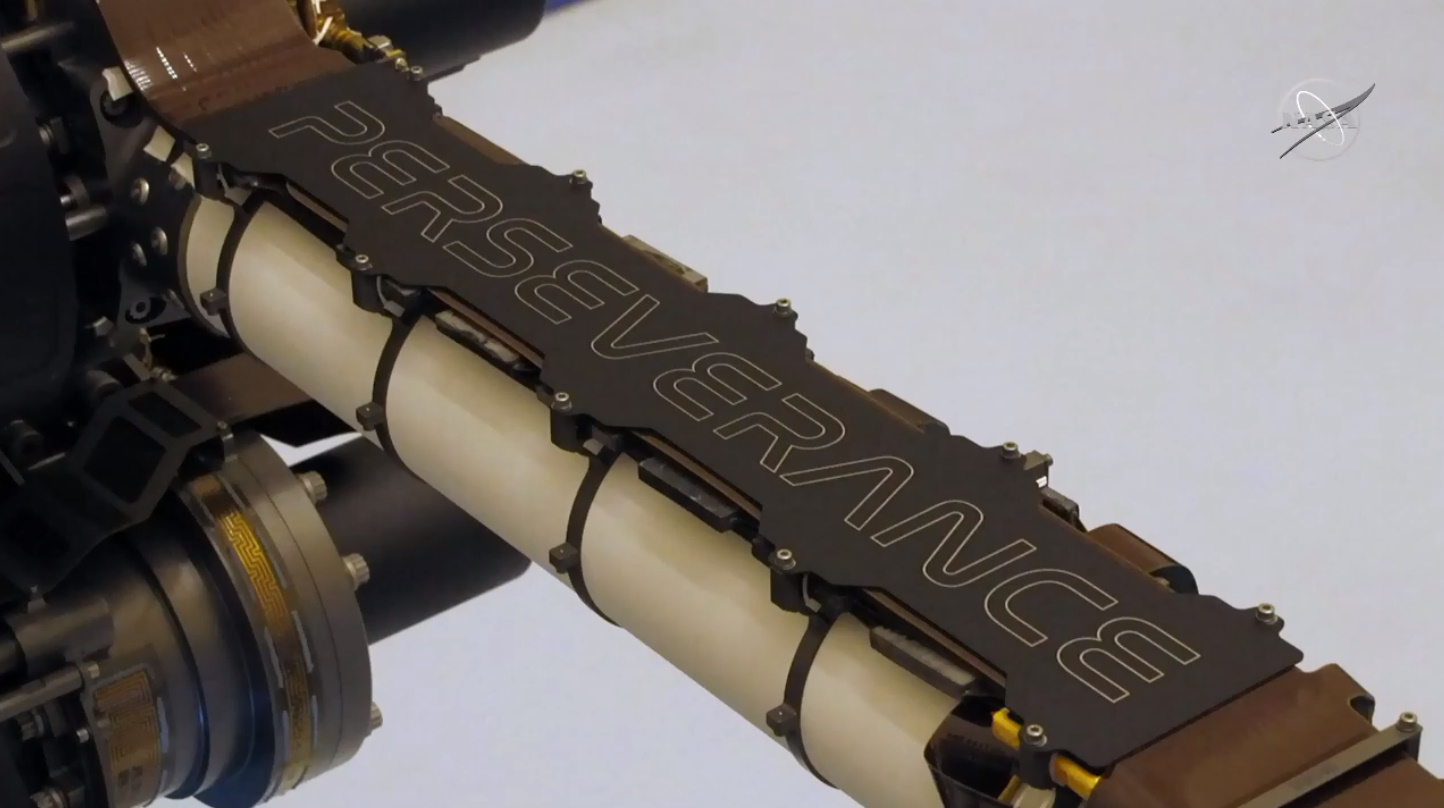 Like SuperCam, another instrument named Mastcam-Z is located on the rover’s mast. Mastcam-Z includes a zoom camera that can capture panoramic color and three dimensional photos, as well as high definition video, at high speed. The two megapixel camera will allow detailed examination of distant objects.

Another instrument onboard is the Mars Environment Dynamics Analyzer. MEDA aims to conduct weather measurements including wind speed and direction, temperature, and humidity. MEDA will also measure the amount and size of dust particles in Mars’ atmosphere. This experiment is important for protecting future astronauts on the planet’s surface with accurate weather forecasting.

Also part of human spaceflight planning is the Mars Oxygen In-Situ Resource Utilization Experiment, or MOXIE. On two hour intervals scheduled intermittently over the course of the mission, MOXIE will produce diatomic oxygen using carbon dioxide from Mars’ atmosphere. This demonstration hopes to inform future breathing air and rocket propellant production for human exploration. The size of the generator aboard Perseverance is significantly smaller than what would be required to support human crews, by an approximate factor of one hundred.

Further evaluation of Mars’ natural resources and geology will be accomplished using the Radar Imager for Mars’ Subsurface Experiment, or RIMFAX. Using ground penetrating radar, the instrument can see geologic features such as ice, water, and salt brines more than 10 meters beneath the surface. RIMFAX will conduct measurements about every 10 centimeters along the rover’s path.

The final two instruments both support further analysis of geological features on Mars. The Planetary Instrument for X-ray Lithochemistry (PIXL) will identify chemical elements using an x-ray spectrometer, and capture close-up photos of rock and soil textures. The Scanning Habitable Environments with Raman and Luminescence for Organics and Chemicals (SHERLOC) instrument will specifically target minerals altered by wet environments, which could harbor signs of past microbial life. SHERLOC also carries small pieces of spacesuit material in order to verify the instrument’s accuracy and study how the material withstands the Martian environment.

Perseverance’s arsenal of scientific instruments were thoughtfully selected to support NASA’s overarching human exploration goals. The data gained from the newest Mars rover will help scientists understand more about how planets form, and support safe and successful crewed exploration of the red planet in the coming decades.