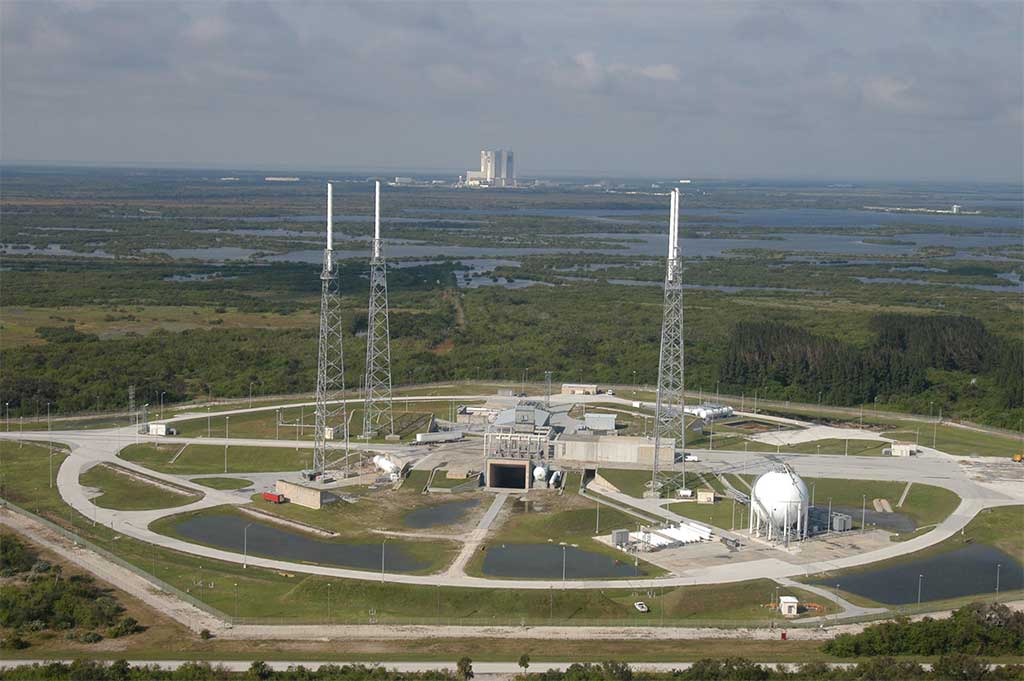 As world leaders grapple and struggle to control the coronavirus pandemic which leads to the COVID-19 disease, the world’s space organizations are also adopting various policies to help combat the spread of the illness and protect their workforces.

While business remains largely “as usual” in the United States arena, Russian authorities are taking added measures to protect the upcoming crew of the Soyuz MS-16 mission to the International Space Station, while China begins to resume launch operations and Europe shutters its spaceport indefinitely.

In a teleconference with reporters this morning, Brigadier General Douglas Schiess, Commander of the 45th Space Wing overseeing Patrick Air Force Base and the Cape Canaveral Air Force Station in Florida said the Wing itself was operating under three general principles:

Of note, the Brigadier General struck an optimistic tone, saying there are currently no Wing impacts to missions.

SpaceX has already been affected by the pandemic, with their upcoming SAOCOM-1B launch, which was planned for 30 March, now delayed indefinitely because of the payload customer and not because of SpaceX or the 45th space Wing itself.

That, coupled with the first confirmed COVID-19 case on neighboring Kennedy Space Center underlies the reality that the space sector in the United States will not escape the effects of the virus. 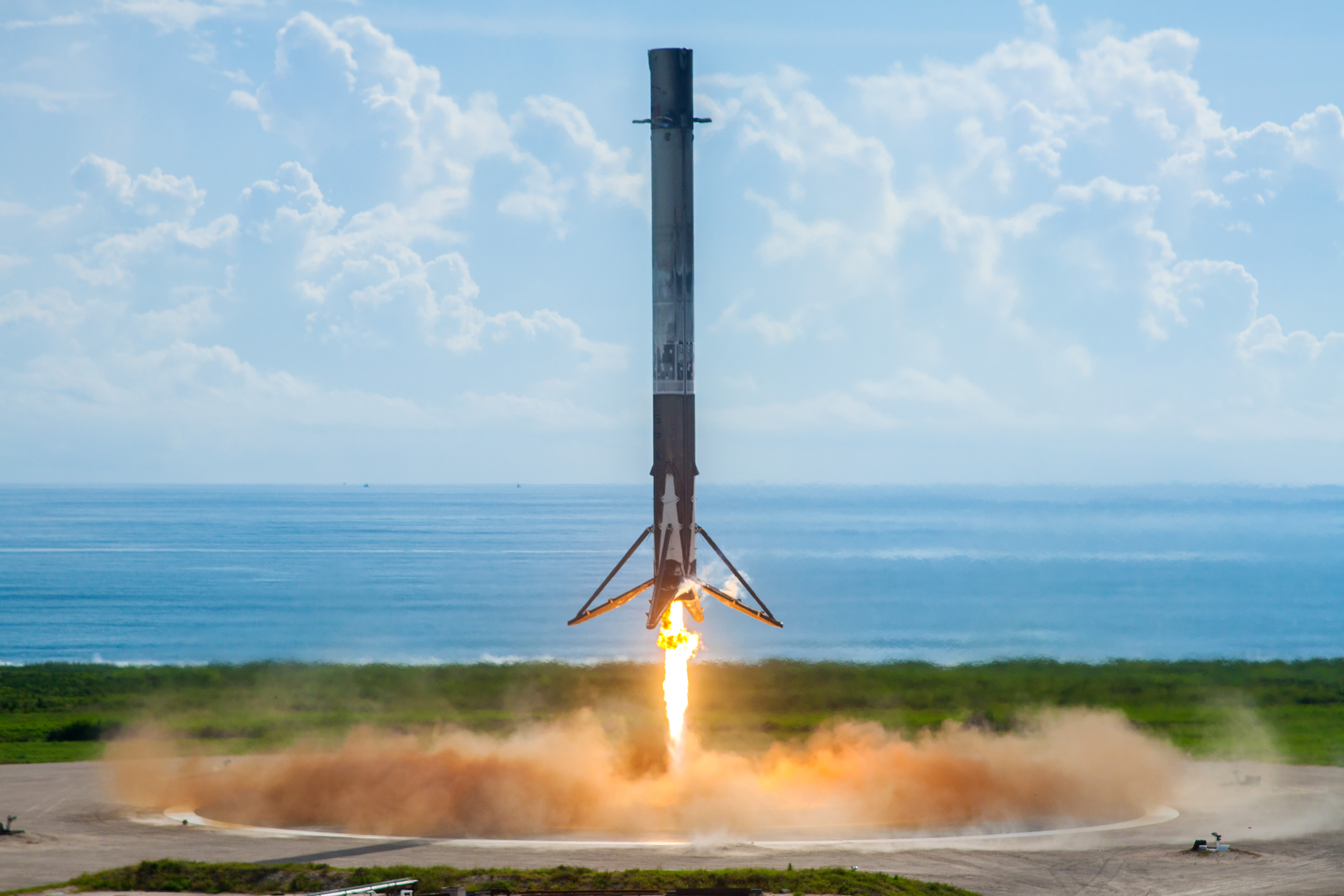 Brig. Gen. Scheiss emphasized the 45th Space Wing’s commitment to the protection of its personnel, noting that while over 300 people will be on base and on console working this week’s planned launch of the Advanced Extremely High Frequency 6 satellite on the United Launch Alliance Atlas V rocket, those personnel would be practicing social distancing in the control centers and that equipment would constantly be wiped down and sanitized.

The Brig. Gen. also emphasized that all console and duty training for launches has been suspended, with those personnel told to stay home and not come in.

Moreover, Brig Gen. Schiess stressed that the Wing has at least two sets of workers who will be swapped out on a mission by mission basis to ensure the protection of personnel and the ability to minimize the spread of the coronavirus on base while still supporting launches.

At present, there are no confirmed cases of COVID-19 at the Cape Canaveral Air Force Station or Patrick Air Force Base, though the Brig. Gen. did note that several base employees and airmen are/were in quarantine as they had exhibited symptoms of the disease.

Those tested have been negative for the disease, but there are still a few outstanding tests that have not come back from the lab as of Tuesday morning.

Additional responses taken by the Space Wing will have to be done in coordination with NASA and the Kennedy Space Center, which confirmed its first case of COVID-19 on Monday, 23 March.

Surprisingly, the Kennedy Space Center, as every other NASA Center did when a confirmed case of the disease became known, did not go to Stage 4 operations — which would suspend all work at the Center that was not related to the preservation of hardware and human life.

When asked specifically why KSC had not followed all other NASA centers and apparent NASA policy as discussed by Administrator Jim Bridenstine on social media, KSC Public Affairs said, “We received notification on Sunday, March 22 that a member of our Kennedy team has tested positive for coronavirus (COVID-19). 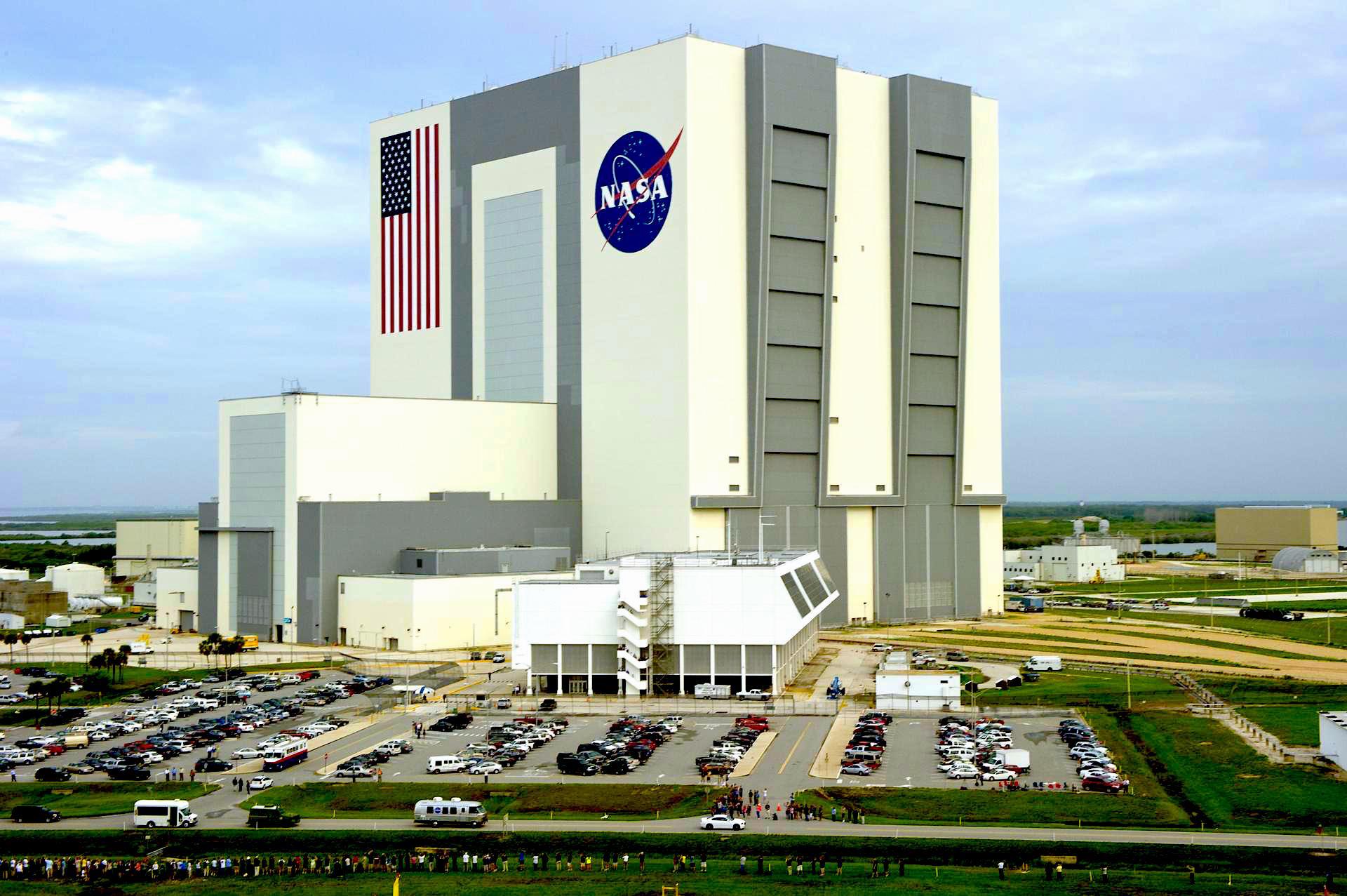 “This employee was last at the center more than 10 days ago. Based on the circumstances and elapsed time since the employee was on site, we believe it was acquired after they had started teleworking and there is no additional risk at the center from this person.

“The protection and care of the Kennedy workforce, their families and the entire Kennedy community remains our top priority during this uncertain time.”

At today’s media teleconference, when asked how the interconnected relationship between the Kennedy Space Center and the Cape Canaveral Air Force Station works, Brigadier General Schiess said he was in constant communication with Kennedy personnel and that while it is possible to close the respective lands between the two centers, no plan to do so is currently being worked.

The Brig. Gen. confirmed companies with assets on both the Cape Canaveral Air Force Station and Kennedy Space Center would likely be able to continue accessing their work areas on Kennedy should NASA decide to take KSC to Stage 4 while CCAFS maintains its current response status.

At present, contractors and military officers are still performing their on-site duties at the Cape Canaveral Air Force Station, and the 45th Space Wing is already at the maximum level of telework it can support.

Brigadier General Schiess also stated there would “have to be a significant population of operations personnel get sick to impact [the Range’s] ability to support a launch.”

Nonetheless, plans are in place for how launch operations would be disrupted should the situation worsen.

How do we prepare our astronauts for long periods of isolation?

The @Space_Station has hosted 170 long-duration missions — with the majority in the five- to seven-month range. These missions help us prepare for future missions to the Moon and Mars: https://t.co/rI48BuQ7Mp pic.twitter.com/GLVfanoatO

The exact execution of the plan would depend on how bad the situation gets and how quickly it deteriorates, but the basics are:

While the Kennedy Space Center has not changed its alert status despite a confirmed COVID-19 case, numerous other NASA centers have, grinding work on critical flight hardware and missions to a halt.

Most notably, the Ames Research Center, the Stennis Space Center, and the Michoud Assembly Facility are all at Stage 4 readiness with all hands-on hardware work suspended.

This will have an impact on NASA’s Artemis program and preparations to get the Space Launch System rocket ready for its debut flight next year.

The upcoming SpaceX Demo-2 mission, the first crew launch from the United States since the retirement of the Space Shuttle in July 2011, is likely to receive a mission-critical designation.

This would allow Bob Behnken and Doug Hurley to continue training and allow SpaceX technicians the ability to continue processing the Falcon 9 rocket and Crew Dragon capsule that will be critical in maintaining full ISS support and crew capabilities.

The Demo-2 crew mission is currently slated for No Earlier Than mid-May 2020, launching from LC-39A at the Kennedy Space Center.

Meanwhile, the Ames Research Center is keeping the agency’s supercomputing resources online, as well as the NASA IT Security Operations Center and in-flight spacecraft operations. 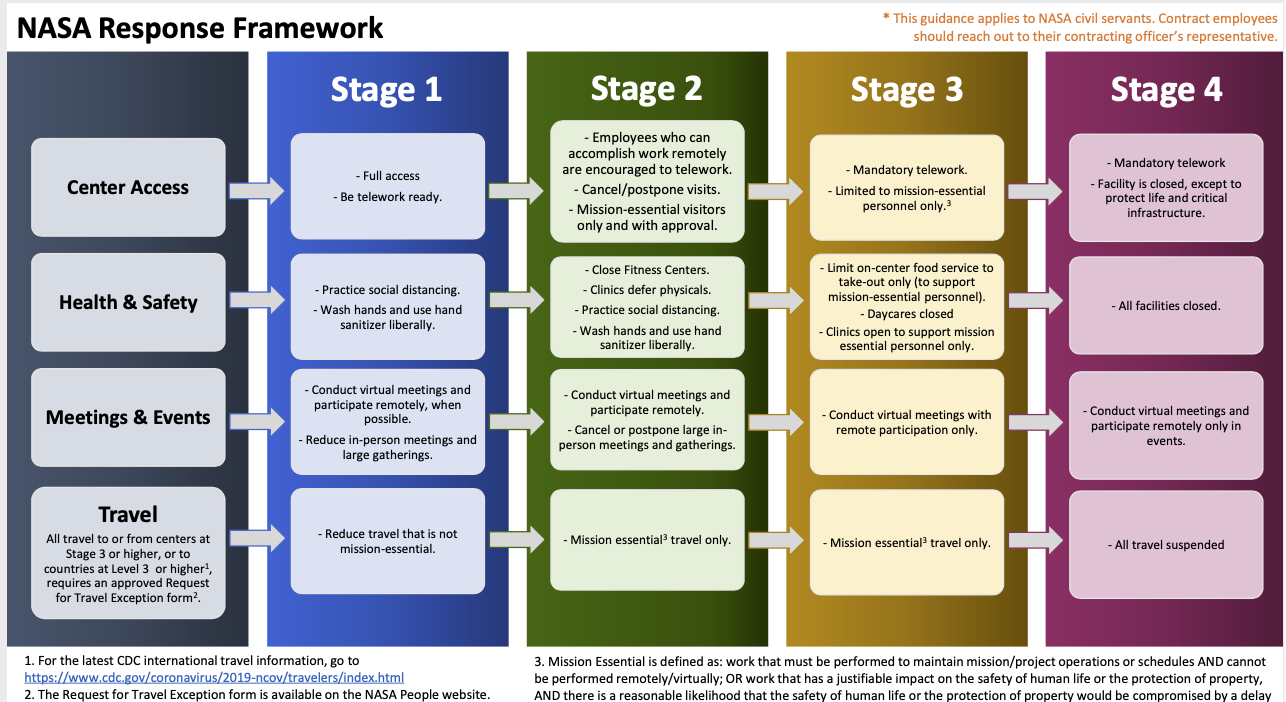 The NASA coronavirus response stages and their meanings. (Credit: NASA)

All work associated with supporting International Space Station operations continues.  Flight controllers are working in the Mission Control Center at Johnson Space Center in Houston, where a number of additional measures went into effect in early March to reduce the risk of exposure to the team.

NASA also is supporting mission-essential operations for all spacecraft.  This encompasses the Hubble Space Telescope and space communications network, as well as satellite missions that support the National Oceanographic and Atmospheric Administration and Department of Defense, including those that provide critical weather and GPS data.

As of publication at 13:00 EDT on 24 March, each NASA Center was at the following Stage of response:

While the pace of Russian launches has largely been unaffected thus far by the coronavirus pandemic, added precautions are being enacted by Roscosmos and NASA ahead of the scheduled 9 April 2020 launch of three new crew members to the International Space Station.

The mission, Soyuz MS-16, will launch two Russian cosmonauts and a single American astronaut up to the outpost.

According to a NASA Johnson Space Center spokesperson, “NASA and its international and commercial partners take steps to prevent the crew from bringing illnesses like the cold or flu to the International Space Station.  All of our crew must stay in quarantine for two weeks before they launch.”

This two-week quarantine ensures astronauts are not sick or incubating a virus or illness when they launch to the Station.

According to NASA, an extension of this two-week quarantine has not been considered and will not be in place for the Soyuz MS-16 crew; however, “As a result of uncertainties related to international travel and an effort to limit potential exposure to illness while transiting to and from Kazakhstan, NASA is sending a smaller number of team members to support launch.

“This core group of launch support staff and crew family members will abide by strict medical protocols while interfacing with crew during the standard pre-launch quarantine period.”

While the standard quarantine will remain in place, Roscosmos has implemented additional safety precautions, cancelling the traditional public events and outings for the crew that have been the tradition in the Russian human spaceflight program for decades.

Nonetheless, in quarantine, the Soyuz MS-16 crew will have the usual amount of contact with “pre-cleared by NASA flight surgeon” personnel at crew quarters at the Baikonur Cosmodrome.

Additionally, Roscosmos has canceled all media activities and rescinded media accreditation for the Soyuz MS-16 launch to limit the number of non-essential people traveling from around the world into Kazakhstan for the mission.

China was one of the first countries to see a coronavirus impact on its space sector, with numerous launches being delayed and postponed due to the nation’s response to the virus.

This Long March 2C launched earlier today carrying three YaoGan-30 wasn't in any hurry to get off the ground. pic.twitter.com/dMBnlYWjk7

The large scale shutdown of Chinese launch operations stemmed in part from the fact that numerous rocket production facilities are located in Wuhan Province, the epicenter of the outbreak as it was first discovered.

The normally robust Chinese launch schedule began with a salvo of three missions within nine days in early January, dropping off to only one launch in the entire month of February before beginning to ramp back up again in March with hardware and rockets that were largely already at their launch sites when the outbreak began.

The total, cumulative effect on the Chinese launch is not widely known — thanks in large part to the program’s overall secrecy.

ina has numerous, critical missions upcoming this year, including a test flight of their new crew capsule, an interplanetary mission to Mars, and a lunar sample return flight — all of which likely continued processing to some extent to meet their launch dates.

The European Space Agency’s response to the coronavirus and its space activities has by far been the most robust seen to date around the world, with the supranational agency shuttering its launch site in French Guiana indefinitely in addition to mandatory telework and closures of space centers around Europe.

Closure of the Guiana Space Centre had an immediate effect on three upcoming launches, two on a Soyuz and the highly anticipated return to flight of the Vega rocket.

The closure is likely to have knock-on effects on other European missions; however, the extent will largely be dependent on how bad the coronavirus outbreak becomes in the country of French Guiana – which directly affects how long the Guiana Space Centre must remain closed for the protection of human life.

Meanwhile, the exact effect the coronavirus outbreak will have on the Japanese and Indian launch markets is largely unknown. 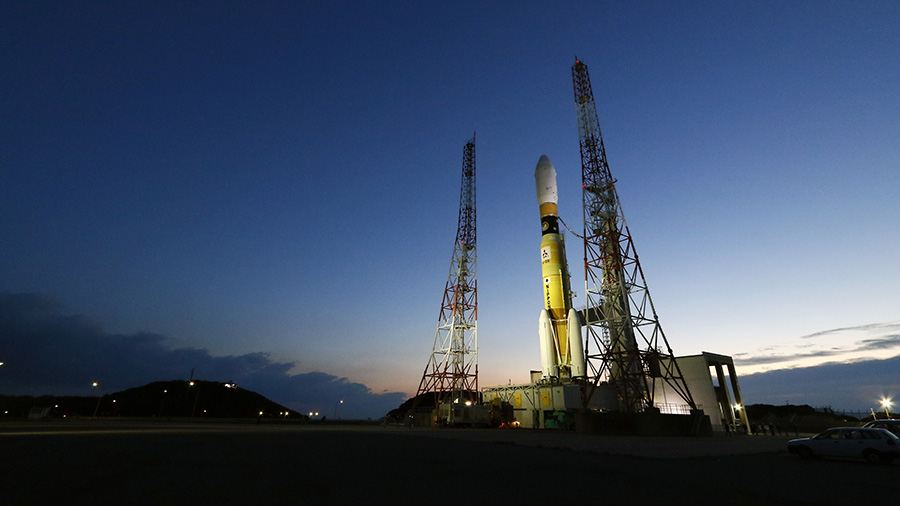 India was ordered to self-quarantine, measures that escalated rapidly today (24 March) with a mandatory nation-wide lockdown.

The Japan Aerospace Exploration Agency is — as of publication — targeting a May launch of their ninth HTV cargo resupply mission to the International Space Station.

Station cargo missions are likely to be exempted from any overall launch site closures or suspension of launch operations due to the critical need to keep the International Space Station fully stocked with supplies.