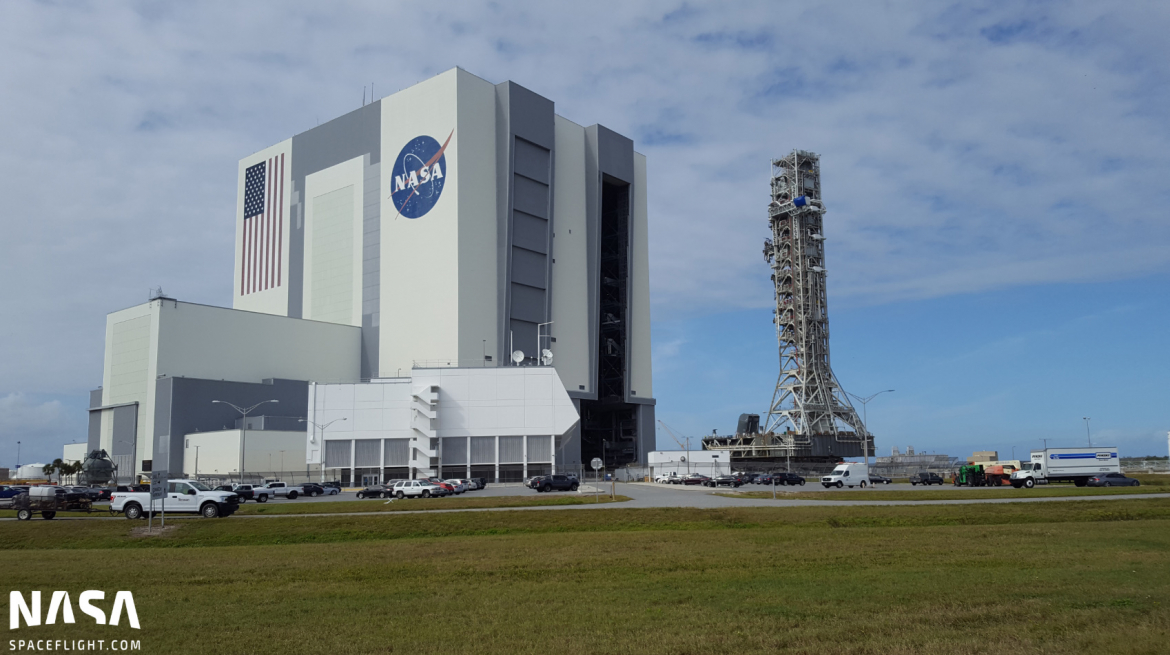 The Office of Inspector General (OIG) has published an extensive report on NASA’s use of two Mobile Launchers for its Space Launch System (SLS). With the completed Mobile Launcher -1 (ML-1) way over cost and schedule, the OIG has called on NASA to implement several recommendations for the construction of the second Mobile Launcher (ML-2) that is required for the slightly taller Block 1B version of SLS.

NASA has used MLs since the early days of the Space Program, allowing for integration inside a Vehicle Assembly Building and rollout to the launch pad.

The initial contract was awarded in 2008 for a Mobile Launcher to be used by the Constellation Program (CxP) to host Ares I launches.

The ML was also set to include a wild Emergency Egress System (EES) that was a literally a rollercoaster for pad crews or astronauts to use in the event of a serious anomaly with Ares I. The Rollercoaster won a trade study over alternatives such as a slide wire system that has since been implemented for the SLS version of the ML. 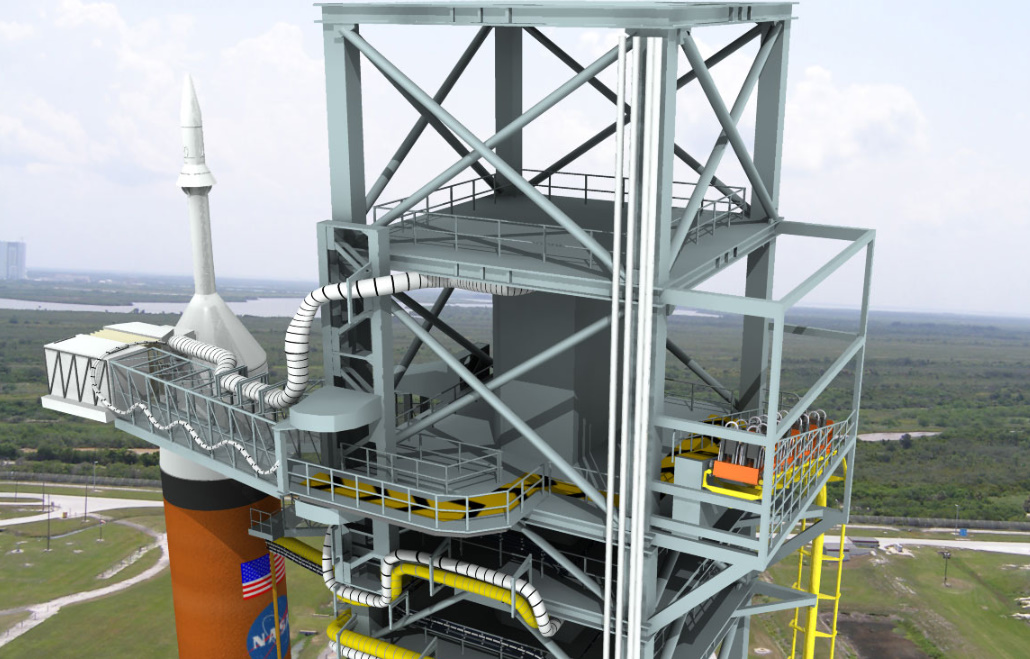 The Ares I rollercoaster EES – via NASA

The cancellation of the Constellation Program (CxP) resulted in the ML receiving its pink slip.

Parked up near the VAB, rumors of what would happen to the ML ranged from pulling the structure apart for scrap, through to a joke that was circulated throughout the KSC workforce claiming there was interest from Disney for turning it into an amusement ride. Ironically, Disney engineers had already worked with the KSC team for designing the EES.

It was then reassigned as the ML for SLS, which required major modifications to elements such as the launch mount and the array of umbilical arms. A major test campaign of the arms and umbilicals took place at the Launch Equipment Test Facility (LETF) inside the Kennedy Space Center grounds.

The OIG noted a cost of at least $927 million – $234 million for the development of the original Ares I ML base and tower and $693 million for SLS-related design and modification projects – has been spent on ML-1 to date. This has caught the attention of the OIG during its audit.

“NASA has greatly exceeded cost and schedule targets in developing ML-1. As of January 2020, modification of ML-1 to accommodate the SLS has cost $693 million—$308 million more than the Agency’s March 2014 budget estimate – and is running more than 3 years behind schedule. Looking ahead, the project faces a risk of further cost increases and schedule slippage,” noted the extensive OIG report.

The report cited numerous design errors during the outfitting of the tower, exacerbated by accepting unproven and untested designs from one of the project’s contractors. NASA confirmed ML-1 was “leaning”, although within acceptable tolerances and mitigation hardware has since been implemented. 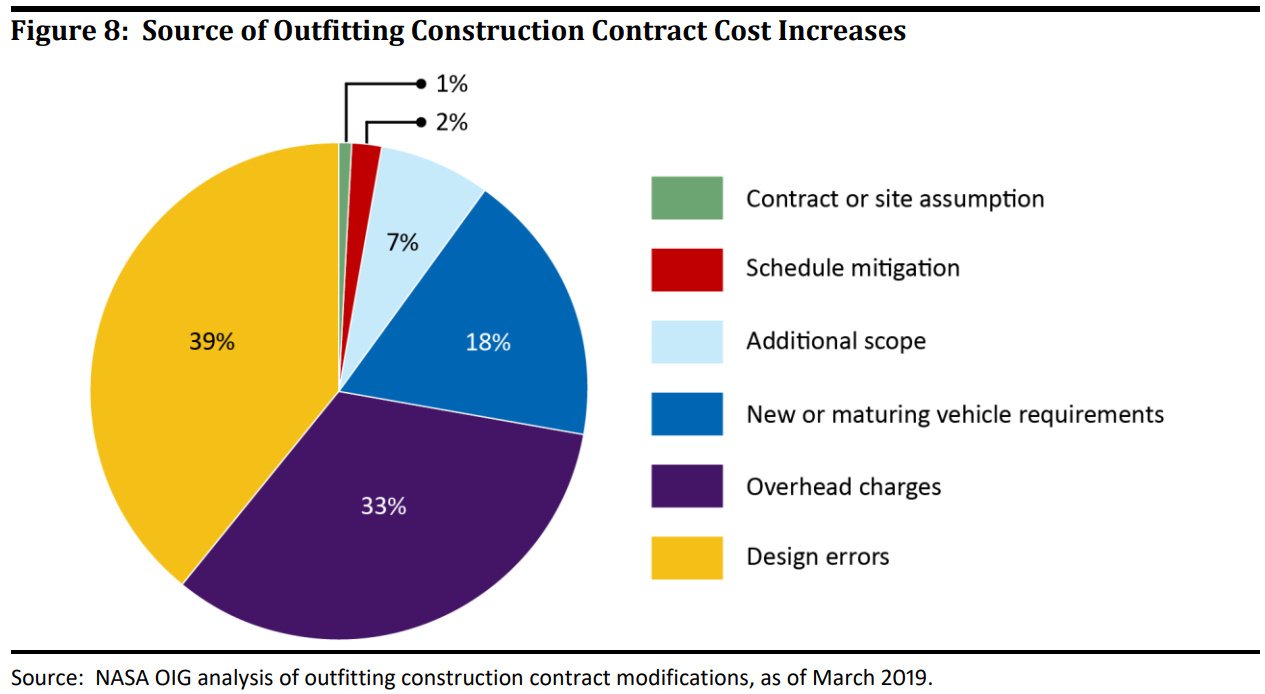 “Additionally, immature SLS requirements resulted in integration challenges that also contributed to increased costs and caused schedule delays. As a result of these issues, NASA incurred substantial unplanned costs for a system the Agency currently plans to use for three or four missions,” added the report.

Issues included problems with at least one of the contractors. The report noted Vencore was the original contractor for designing the ground support equipment to outfit ML-1 until 2017 when Kennedy chose not to renew the contract “due to Vencore’s overall performance”. NASA transferred the remaining design and testing work to industry stalwart Jacobs.

The actual SLS schedule is still under numerous stages of evaluation, although it is now highly likely the Block 1 SLS will fly at least four missions as cited by the OIG, potentially resulting in several missions with Block 1B initially being used only as a cargo launcher. The maiden launch of SLS – on Artemis -1 – is expected to settle on a Summer 2021 launch date.

The original option was to modify ML-1 once again, moving it from hosting Block 1 SLS rockets to the Block 1B. However, this would have taken several years to complete, during which time SLS would have been unable to launch any missions.

This issue was raised by the Aerospace Safety Advisory Panel (ASAP) in 2017 – noting concerns about a potential 33-month gap between SLS launches due to the time required to modify ML-1 to accommodate the larger SLS variants, namely SLS Block 1B and SLS Block 2, that were expected to incorporate the Exploration Upper Stage (EUS). However, the use of the EUS raises the height of the SLS 30 feet and would require significant modifications to ML-1. 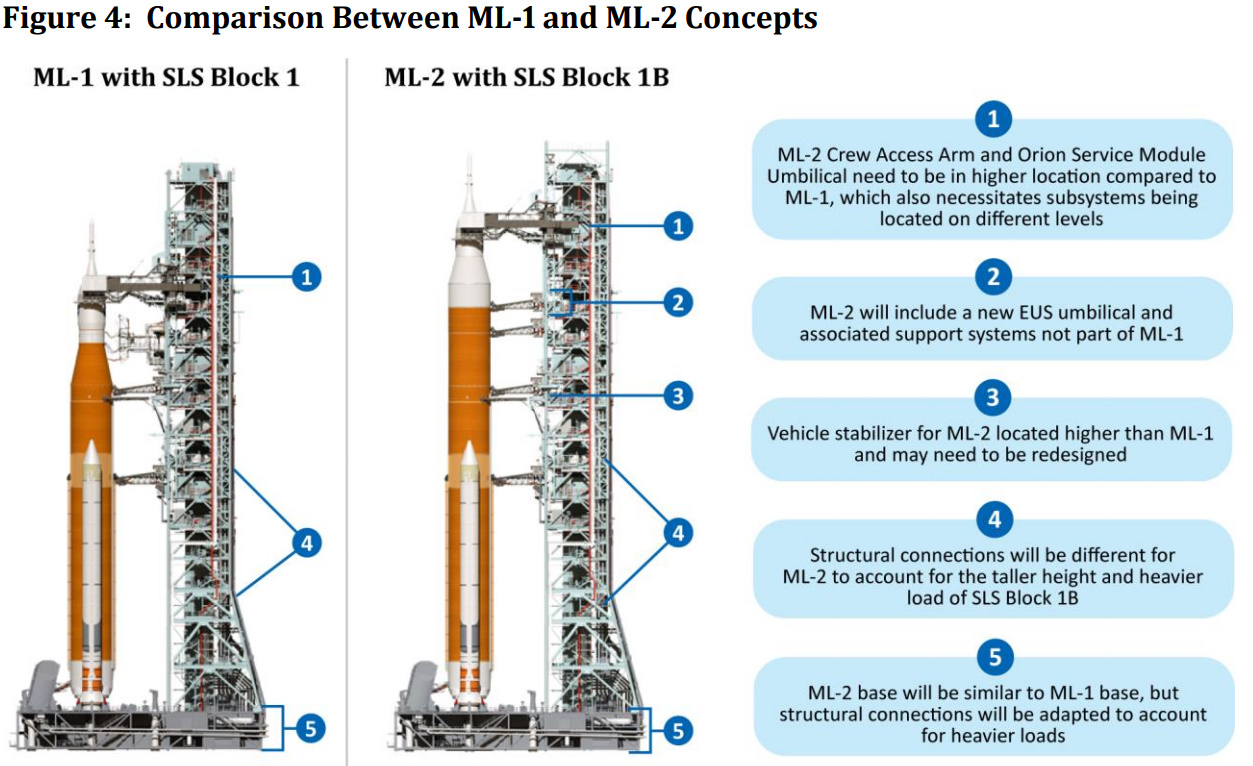 In addition to the 33 months required for modifications, ASAP concluded that modifying ML-1 would create potential safety risks given the expected rate of attrition of Kennedy’s ground and launch workforce over a 33-month inactive period, resulting in a loss of experience and knowledge.  Following this recommendation, Congress included $350 million in the Consolidated Appropriations Act of 2018 to construct ML-2 for SLS Block 1B.

The OIG has numerous recommendations aimed at avoiding some of the issues suffered by the development of ML-1.

“Looking to ML-2, NASA has taken positive steps to address lessons learned from the design and development of ML-1. Specifically, NASA is utilizing a single contract to both design and build ML-2 that the Agency believes will remedy a majority of the communication and integration issues that occurred during modification of ML-1,” added the report.

“Despite these positive steps, NASA is missing opportunities to improve project management and oversight of the $486 million ML-2 project.

The OIG is concerned the ML-2 schedule is “risky” due to expected vehicle load and interface requirements changes for the Orion and later variations of the SLS with already limited time for testing that could be further impacted by development delays. 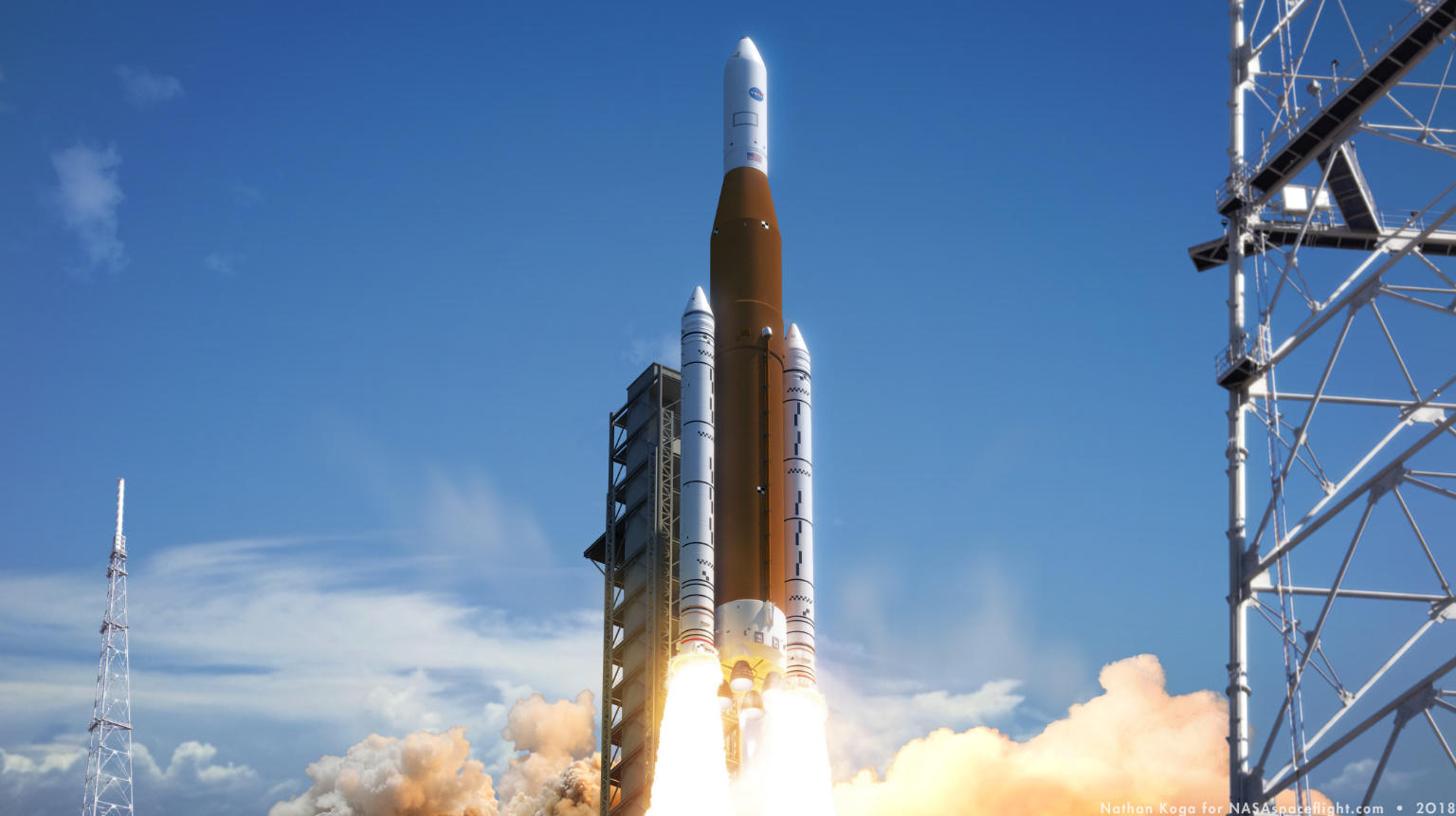 SLS Cargo launch from 39B – via Nathan Koga for NSF/L2

They are also concerned ML-2’s design-build contract structure utilizes award fees, which if implemented similar to the ML-1 project may limit the Agency’s ability to motivate the ML-2 contractor to improve performance and control costs.

“At the time of our audit, the ML-2 project had not finalized plans to (1) conduct life-cycle and milestone reviews with NASA’s senior management separate from the EGS (Exploration Ground Systems) Program, limiting the Agency’s ability to make timely adjustments to a project that has significant risk of cost and schedule increases, or (2) establish a project-specific Agency Baseline Commitment, limiting project visibility and NASA’s ability to make adjustments prior to providing additional funding.”

In total, the OIG made four recommendations to NASA to improve the potential outcomes of the ML-2 development.

These included a call to identify immature vehicle load and interface requirements for the ML-2 project and coordinate with appropriate offices to mitigate cost and schedule risks, to develop a process to ensure contractor performance ratings and related award fees for the ML-2 contract are consistent with established criteria and project outcomes, to ensure life-cycle and milestone reviews incorporate programmatic and technical risks and are conducted with the Associate Administrator for Human Exploration and Operations Mission Directorate and other senior Agency officials, and to require the ML-2 project to develop an Agency Baseline Commitment separate from the EGS Program.

“We provided a draft of this report to NASA management who concurred with these recommendations and described their planned remedial actions. We consider the proposed actions responsive and will close the recommendations upon completion and verification,” the report concluded.