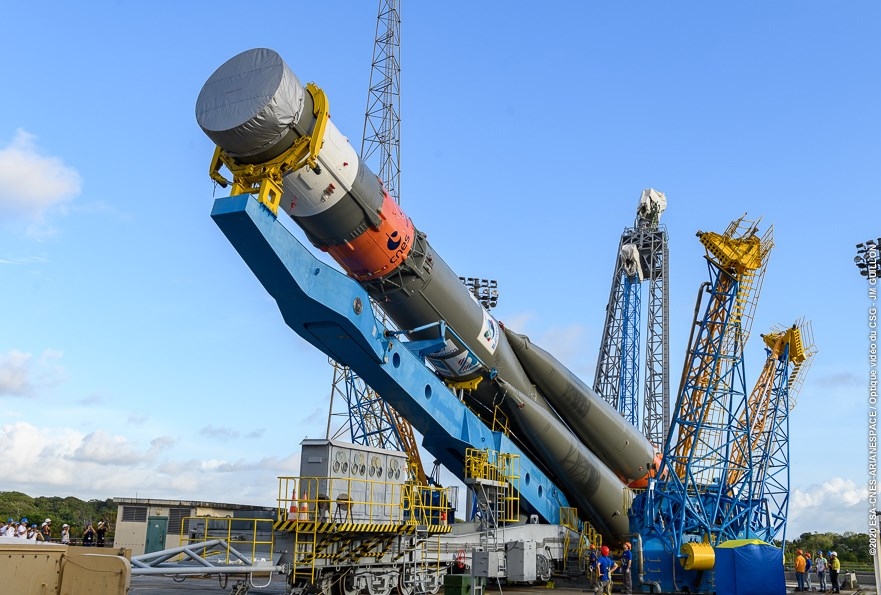 The launch of the Soyuz ST-A flight VS-24 carrying the Falcon Eye-2 satellite has been delayed from it’s March 6 launch date due to a malfunction on the Fregat-M upper stage. It is understood the mission will be delayed a month in total, with a preliminary launch target noted as April 6.

Falcon Eye-2 is the second reconnaissance satellite that has been built by Thales Alenia Space for the United Arab Emirates Armed Forces. The first satellite, Falcon Eye-1 launched on the 15th launch (VV15) of Arianespace’s Vega rocket on July 11, 2019. The launch began at ELA-1 at the Guiana Space Center in Kourou, French Guiana.

The first stage of Vega performed nominal. However, after first stage separation, the second stage – or the Z-23 – suffered an anomaly. The anomaly occurred around 2:11 minutes after liftoff, at an altitude of 60 Km and around 113 Km north of the Guiana Space Center.

In a video released by the Italian company Avio on Dec 6, 2019, the anomaly was due to a failure of the thermal protection system on the upper dome of the Z-23. This failure then allowed hot gas on the solid rocket motor to escape, which then led to a loss of the launch vehicle and the Falcon Eye-1 payload.

After around 9 minutes after liftoff,  it was obvious that a launch failure had occurred. “I would like to express my deepest apologies to our customers of the loss of their payload,” said Luce Fabreguettes, the Executive Vice President Missions, Operations & Purchasing, Arianespace.

The Soyuz ST-A, like other Soyuz rockets, was built by the Progress Rocket Space Centre in Samara, Russia. The first stage of the Soyuz ST-A has the RD-108A engine, while each of the four boosters have the RD-107A engine. The second stage runs on the RD-0110. 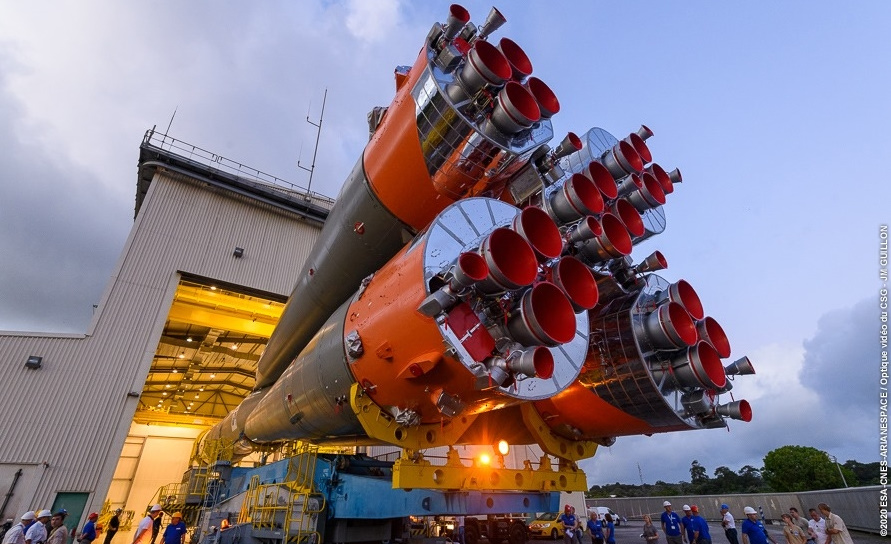 Arianespace photo of this Soyuz’s rollout

The segments and stages of the Soyuz ST-rocket were assembled inside an integration facility near the Soyuz launch pad at the Guiana Space Centre.

Unlike integration at Russian Cosmodromes such as Baikonur and Plesetsk, the Soyuz-2 vehicles that have a Fregat upper stage are integrated into the Soyuz booster in a mobile gantry at both Vostochny Cosmodrome and in Kourou. The launch gantry in Kourou looks similar to the one at Vostochny.

On March 2, the Soyuz ST-A booster was rolled out from the integration facility via rail to the Soyuz ELS (Ensemble de Lancement Soyouz).  The Soyuz ELS in Guiana is the first Soyuz launch facility built outside of the Russian Federation and Kazakhstan. 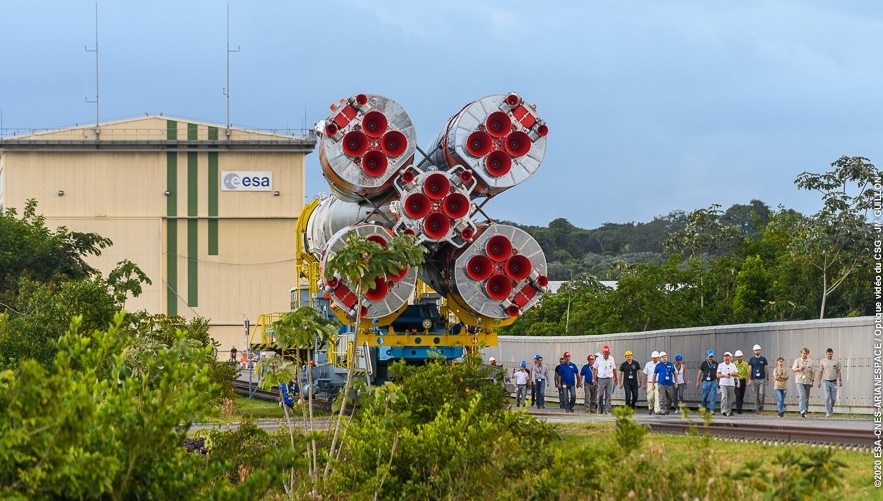 Construction of the Soyuz ELS began on Feb 27, 2007. This led to the first Soyuz launch from Kourou, which occurred on Oct 21, 2011. That mission launched two Galileo satellites for the European Space Agency (ESA) on behalf of the EC.

The Soyuz pads in both Vostochny and Kourou are very similar in terms of age. The Soyuz pad, Site 1S in Vostochny had its first launch in 2016.

The last Soyuz launch from Kourou was the launch of the Characterising Exoplanets Satellite or CHEOPS on Dec 18, 2019. The satellite is now in a Sun-synchronous Orbit.

Once at the launch pad, the Soyuz Booster was rotated to vertical. Then, the mobile launch gantry at the Soyuz ELS was rolled to surround the launch vehicle. This prepared the rocket for final checks and integration of the Fregat-M upper stage to the rest of the Soyuz ST-A rocket.

According to Anatoly Zak/ Russianspaceweb.com, the Fregat-M is built by the Russian company NPO Lavochkin (formerly OKB-301) and has been launched on both Soyuz and Zenit rockets. The Fregat is classed as an upper stage and has a single S5.92 engine that uses hypergolic fuels such as Unsymmetrical dimethylhydrazine (UDMH) and Nitrogen tetroxide (N2O4).

Since UDMH and N2O4 ignite on contact, the S5.92 engine does not have an igniter. However, hypergolic fuels are extremely toxic. Another Russian engine, the RD-275M also uses hypergolic fuels and is used on the first stage of the Proton-M rocket.

According to TASS, on March 5, engineers in Kourou carried out final pre-flight checks on the Soyuz ST-A rocket prior to the scheduled March 6 launch date. During the checks, an off-nominal malfunction was noticed on a circuit board, which was part of a heating unit on the Fregat-M. 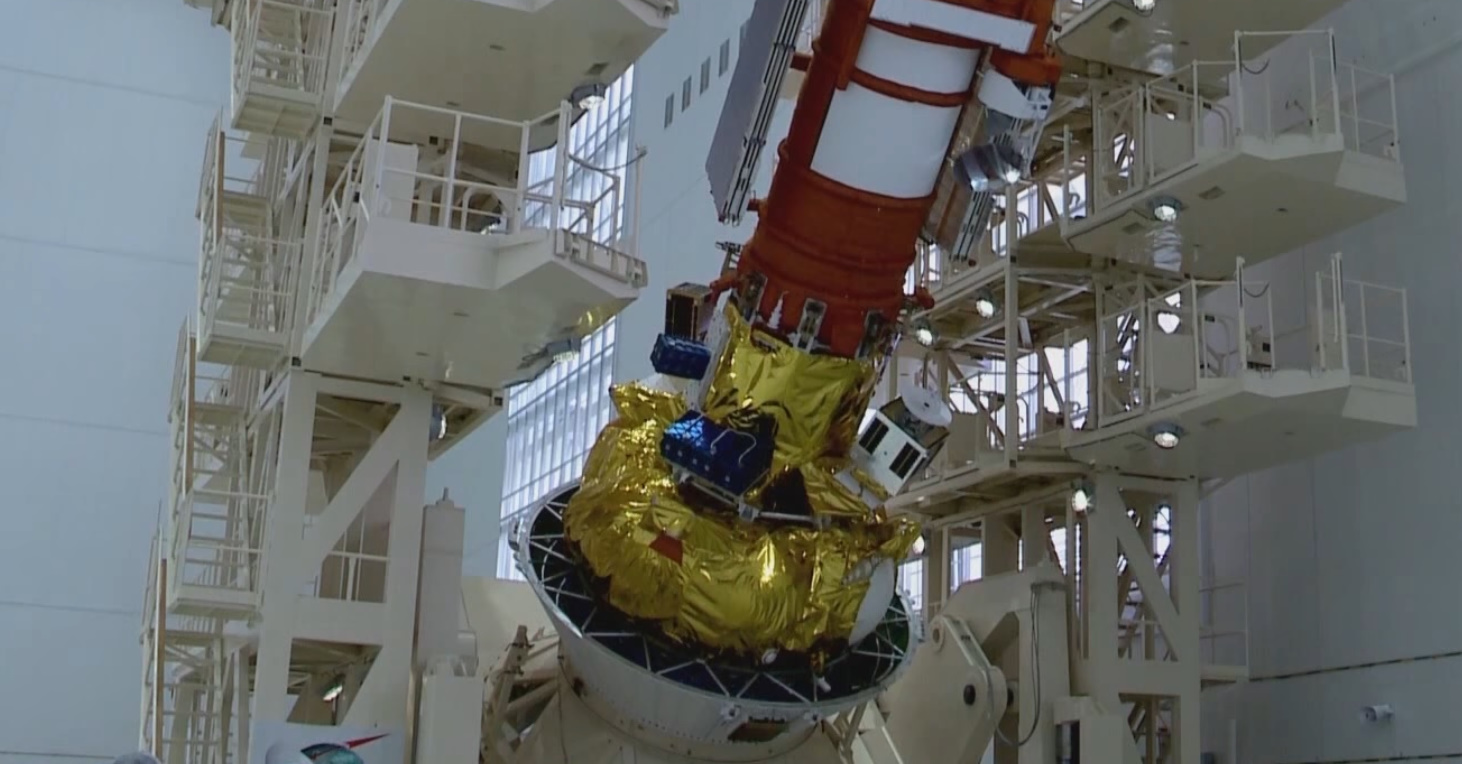 File photo of the Fregat-M

After noticing the issue, Russian engineers concluded that the issue could be fixed. However, the launch customer, the United Arab Emirates Armed Forces decided to err on the side of caution and replace the Fregat-M.

The Fregat-M that had the malfunction will be sent back to Russia, while the Fregat-M destined for the next Soyuz ST-A launch (VS-25) that is currently in storage will be used for the VS-24 mission instead. Once in Russia, the future of the specific Fregat-M is not certain.

The VS-25 mission will launch the CSO-2 satellite for France. However, the launch date is not certain due to the delay suffered by VS-24.

The decision to swap the Fregat-M for another one will push the launch of VS-24 to April/May. Due to this substantial delay, the Soyuz ST-A rocket itself will be removed from the pad between March 9 and March 10. The new launch date for the VS-24 mission is now April 6.