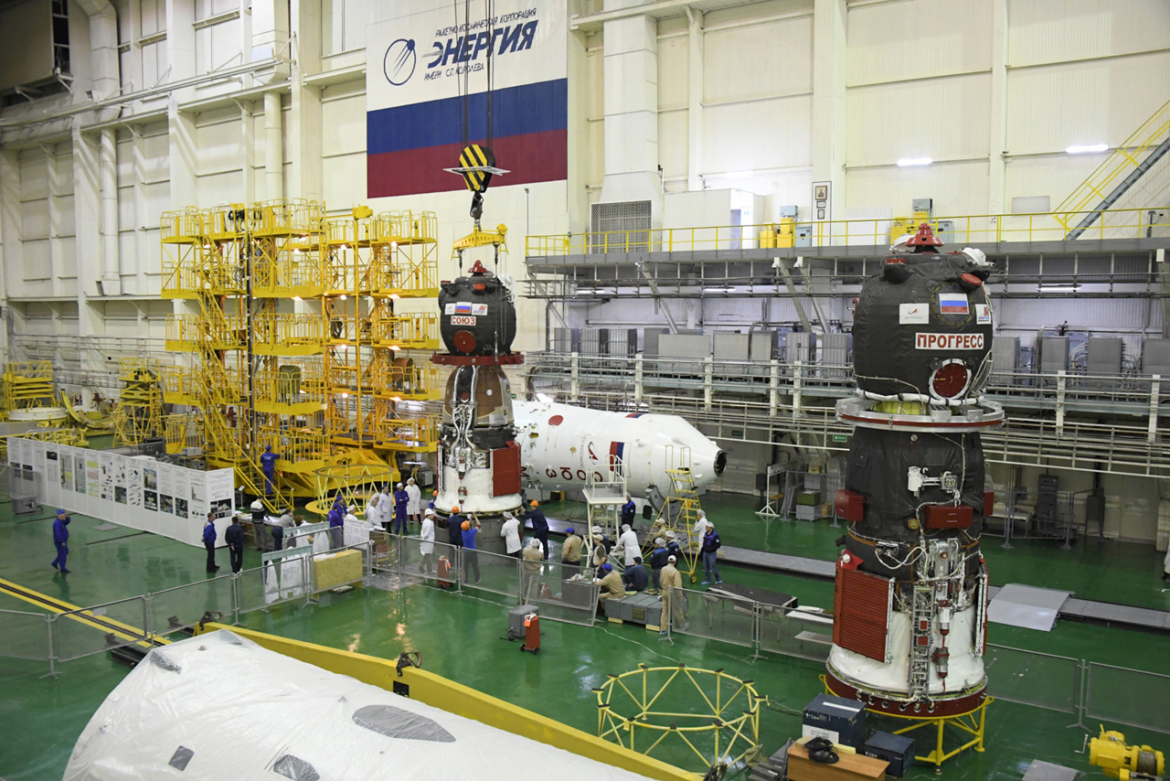 At the Baikonur Cosmodrome in Kazakhstan, Roscosmos and NASA are making preparations for the launch of Soyuz MS-16 and three new crewmembers for the International Space Station while working within new constraints due to the COVID-19 pandemic.

COVID-19, the disease caused by the Coronavirus, has spread around the world and is now a pandemic according to the World Health Organization.

The spaceflight industry is not immune to the pandemic, and some pre-launch traditions for normal Soyuz missions have had to be cancelled or modified, starting with the traditional media press conference in Star City.

Before their departure from Star City to the launch site (amongst a much smaller crowd to bid them farewell), both the prime and backup crews laid flowers at a monument for Yuri Gagarin, the first man to fly into space.

The prime crew for the mission includes cosmonauts Anatoli Ivanishin and Ivan Vagner, as well as NASA astronaut Chris Cassidy. 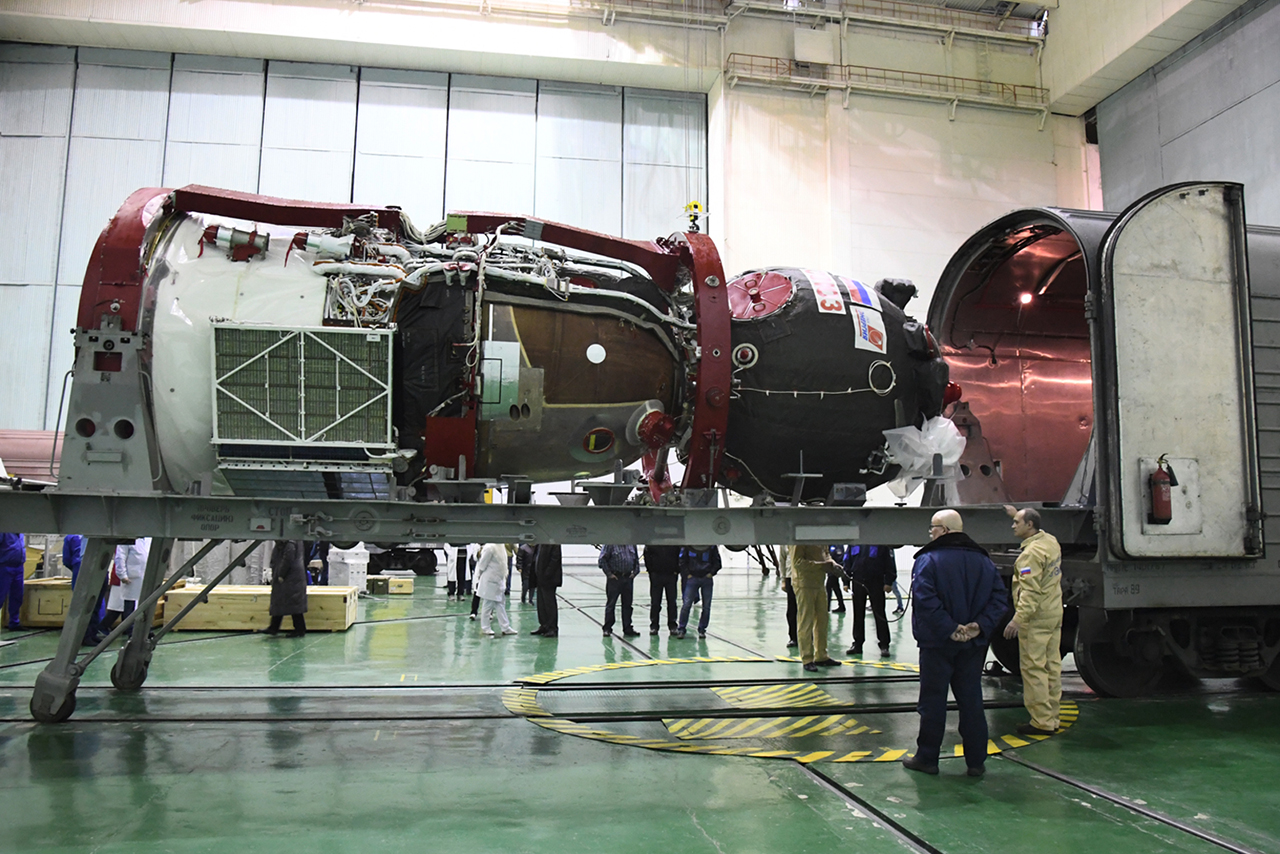 The backup crew for Soyuz MS-16 is made up of cosmonauts Sergey Ryzhikov, Andrei Babkin, and NASA astronaut Stephen Bowen.

Babkin had originally been assigned to the prime crew for Soyuz MS-16 with Nikolai Tikhonov and Cassidy; however, after Tikhonov injured his eye, Roscosmos changed the flight assignments for the mission.

For the Soyuz MS-16 spacecraft, the processing flow has been running per usual. On March 13, RSC Energia announced they had completed vacuum testing on the Soyuz spacecraft in Baikonur.

After this, technicians from both RSC Energia and CC Yuzhny turned their focus to the Soyuz spacecraft’s two solar panels, which are located on the Service module. In order for the test to occur, the panels had to be deployed and extended. Technicians also subjected the solar panels to powerful lights, which tested the solar cells on the panels. These checks and tests occurred inside of the Site 254 complex.

On March 24, both prime and backup crews for Soyuz MS-16 landed at the Krainy airfield, located at the Baikonur Cosmodrome, Kazakhstan. Both crews flew in separate Tupolev TU 204-300s, which were operated by Roscosmos.

Usually, Soyuz crews are met by large crowds upon arrival. However, like other traditions, this had to be cancelled over COVID-19 concerns. Nonetheless, the crew did meet the representatives of the state commission and other officials right after stepping off of the air stairs per usual. 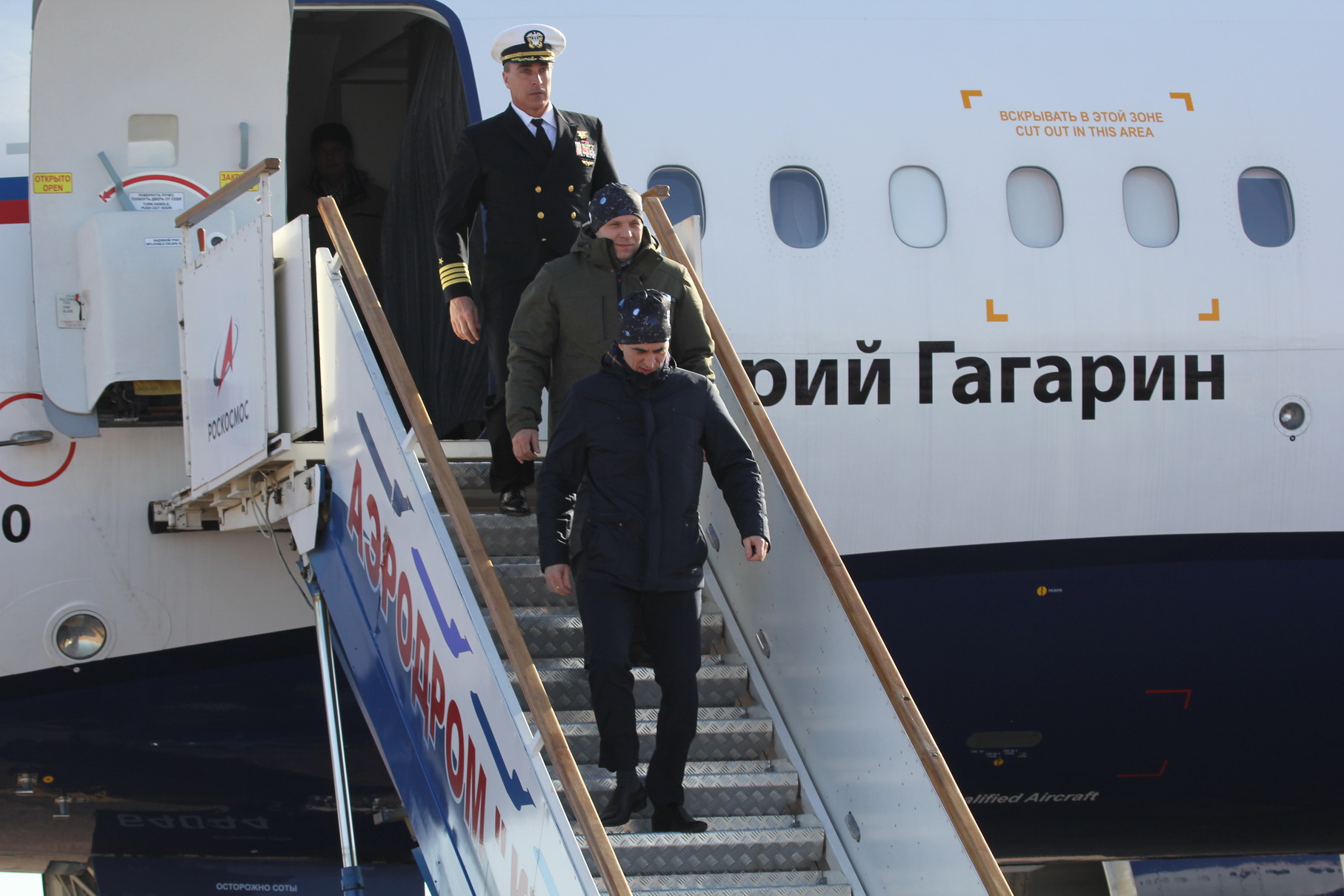 After this, the crew boarded a special bus and left the airfield for crew quarters, where they will be under standard quarantine until launch.

On March 25, the crews underwent fit checks in their Sokol launch and entry suits. These suits are specially tailored for each individual person. An astronaut or cosmonaut only wears their Sokol suits during the ride to and from the ISS inside the Soyuz.

The Sokol suit is designed to save the individual in the event of a cabin decompression and has been in use since Soyuz 12 in 1973.

They were introduced for use on Soyuz missions after the loss of Soviet cosmonauts Georgy Dobrovolsky, Viktor Patsayev, and Vladislav Volkov due to a cabin decompression event when the Orbital Module separated from the Descent Module on Soyuz 11 in 1971.

The same day they arrived at Baikonur, the crews had fit checks in the Soyuz MS-16 spacecraft. The serial number for this specific Soyuz is №.745.

The security measures in Star City are increased due to #Covid_19. The #SoyuzMS16 crew will skip some pre-launch traditions, they won’t visit the Red Square and Sergei Korolev’ House Memorial. At the training analysis sessions, the crew is behind glass. https://t.co/SDAkHXhkYS pic.twitter.com/ZeM2gkENQD

During the fit checks, the prime crew were able to climb into their Soyuz spacecraft and sit in the same seats they will occupy during the launch.

The crews entered the Soyuz spacecraft via a circular hatch on the Orbital Module. Then climbed down the top hatch on the Descent module. This is the same way that the crew will enter the spacecraft on launch day.

The Soyuz was enclosed in a yellow cage-like structure which provides access to different areas of the spacecraft while it is vertical in its testing, checkout, and integration facility.

The backup crew also did the same things that the prime crew did, enabling Roscosmos to switch the two crews in the unlikely event there is some sort of injury or another significant disruption.

In addition to visiting the Soyuz spacecraft and trying on their Sokol suits, the Soyuz MS-16 crew also had the chance to oversee the different clothing, hygiene kits, and other personal materials they will take with them to the ISS.

After crew tests were complete, Roscosmos and RSC Energia announced on March 26 they would commence fueling the Soyuz spacecraft.

The next day, the crew visited a tree planted by Yuri Gagarin, located in the Alley of the Cosmonauts. They laid flowers to remember the first man in space, as March 27 marked the 52nd anniversary of the death of Gagarin.

Per tradition, the crew then planted a tree in the Alley of the Cosmonauts.

Fueling of the Soyuz MS-16 spacecraft was completed on March 28. The Soyuz Descent Module’s thrusters run on Hydrogen Peroxide, which slowly degrades over time. The Soyuz’s main engine, which is located on the Propulsion Module, runs on Unsymmetrical dimethylhydrazine (UDMH) as the fuel and Nitrogen Tetroxide (N₂O₄) as the oxidizer.

In the coming days, the Soyuz MS-16 spacecraft will be encapsulated in the fairing/shroud. This will then be followed by the integration of the third stage and the launch escape tower. After this, the third stage will be integrated/mated to the rest of the Soyuz 2.1a rocket.

As a final COVID-19 safety measure, Roscosmos will not allow media and journalists to travel to the Baikonur Cosmodrome to cover the launch.

If all goes according to plan, Soyuz MS-16 will launch at 08:05 UTC on April 6. Once at the ISS, Ivanishin, Vagner, and Cassidy will meet NASA astronauts Jessica Meir, Andrew Morgan, and cosmonaut Oleg Skripochka, who are currently on Expedition 62.

Eventually, Soyuz MS-15 will land in Kazakhstan, leaving Ivanishin, Vagner, and Cassidy on the ISS. Cassidy will be the sole NASA astronaut on the US-segment of the ISS until mid to late-May when Doug Hurley and Bob Behnken launch on the Demo-2 mission for SpaceX’s Crew Dragon spacecraft and NASA’s Commercial Crew Program.