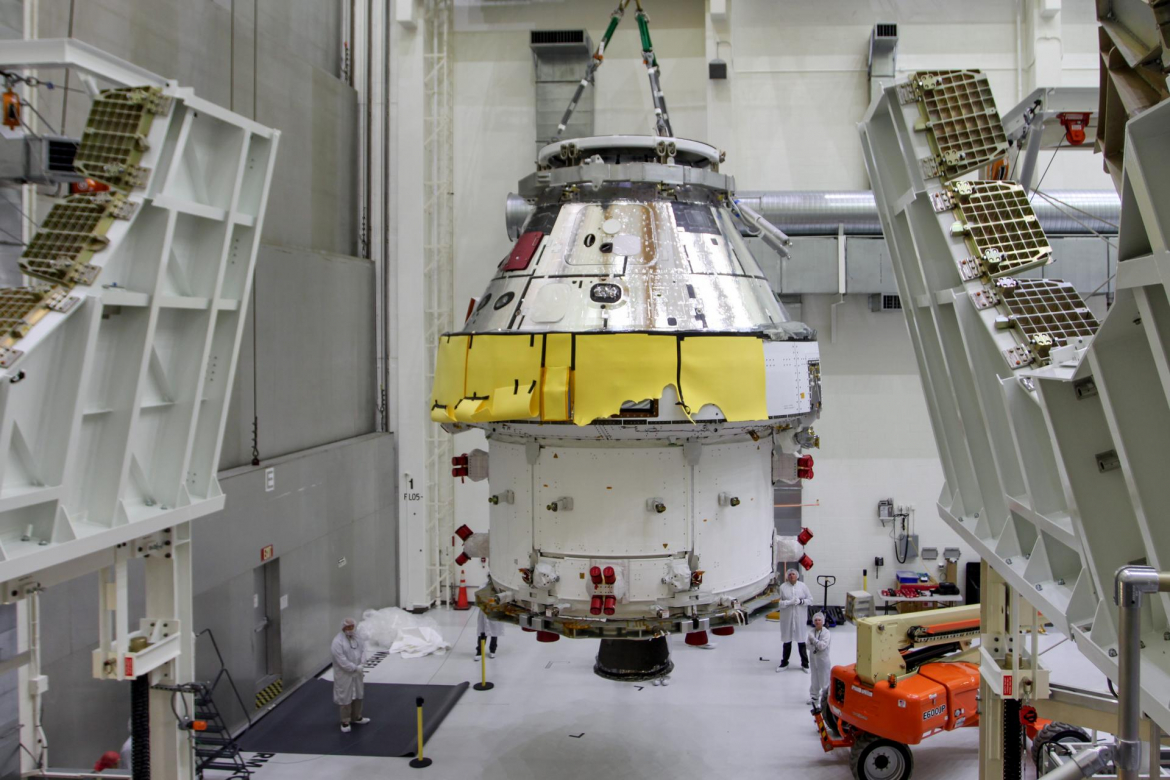 Following a March 25 flight home on the space agency’s Super Guppy cargo aircraft, this second Orion flight article was returned to the Armstrong Operations and Checkout (O&C) Building, unpacked and removed from its shipping container, and lifted back into the Final Assembly System Test (FAST) cell there. Orion prime contractor Lockheed Martin is continuing its Assembly, Test, and Launch Operations (ATLO) work on the spacecraft as NASA continues to evaluate how far to proceed with processing.

The uncertainty associated with the Artemis 1 launch date and with the current coronavirus disease 2019 (COVID-19) global health crisis is likely to keep the Orion spacecraft waiting for elements of its Space Launch System (SLS) rocket for some additional period of time. The SLS Core Stage for the mission is the critical path in the overall schedule to launch in 2021; while hands-on work is still permitted on Orion at KSC, in March it was suspended indefinitely at the Stennis Space Center in Mississippi where the stage is located for testing.

Orion was already ahead of the SLS Core Stage in the schedule and with the stronger public health precautions in effect at Stennis, the spacecraft would be ready for launch preparations in a few months as long as KSC remains open for essential work. Some spacecraft preparations for launch processing consume limited resources and NASA is consulting with Lockheed Martin on where to hold work and wait for more clarity on the SLS Core Stage schedule.

After being returned to its favored vertical orientation inside the O&C Building, the spacecraft was lifted back into the FAST cell on March 30. “Since we’ve been in the FAST cell our work now is to do post-flight inspections and testing,” Scott Wilson, NASA’s Production Operations Manager for the Orion Program, said in an April 8 interview.

The Orion was bolted into a horizontal shipping frame and covered with layers of packaging for the air trip back from Plum Brook Station in Ohio. “At the end of the testing the spacecraft is vertical up at Plum Brook and in order to ship it in the Guppy we have to move it to horizontal,” Wilson explained. “So we moved it out of the thermal vacuum cell up there, we put it on the “verticator” tool, rotated it horizontal, [and] put it into a shipping frame that supports it. 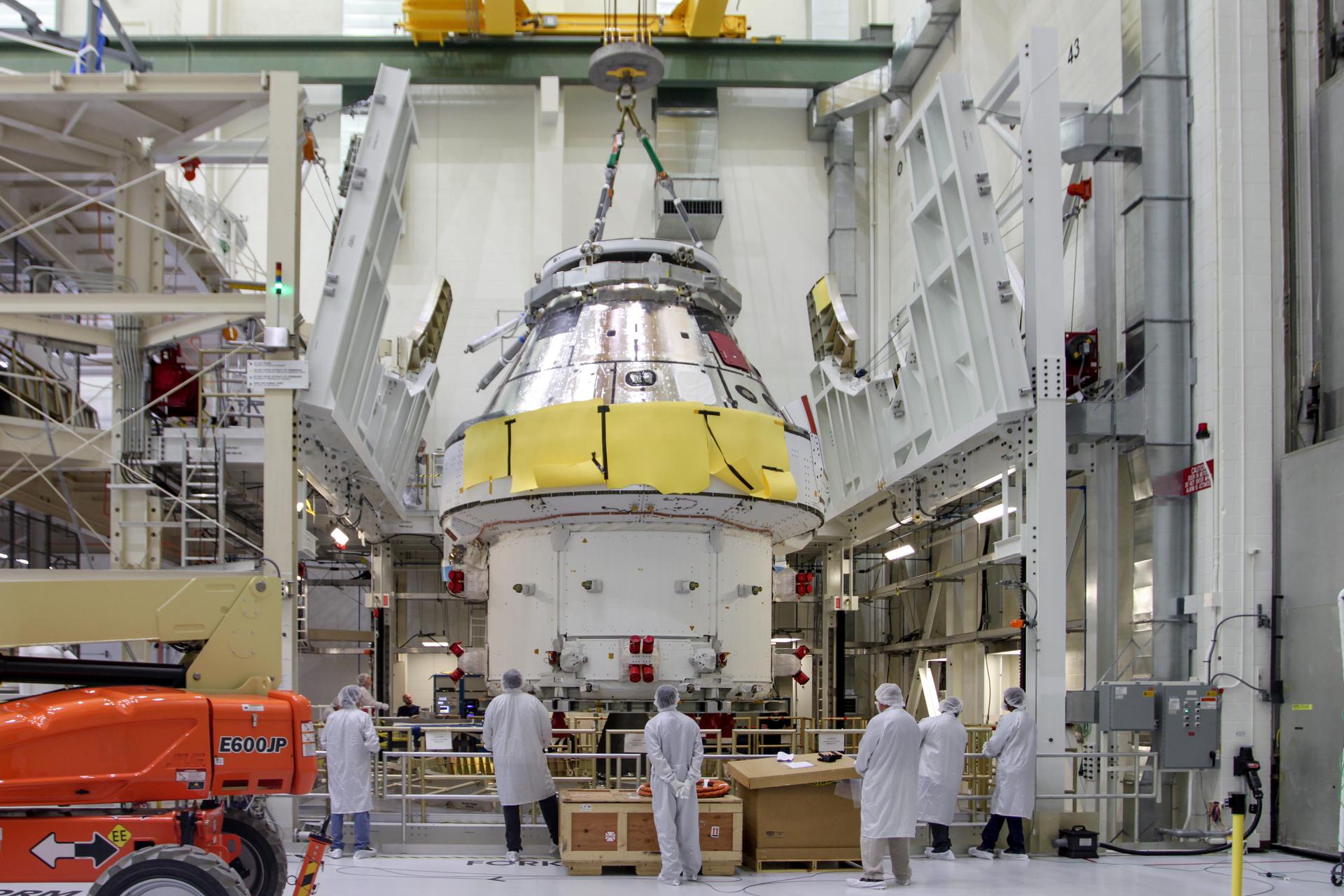 (Photo Caption: The Artemis 1 Orion Crew and Service Module (CSM) is lifted back into the FAST cell in the O&C Building at KSC on March 30. Lockheed Martin will complete final assembly in the cell and then prepare the spacecraft for hand over to NASA’s Exploration Ground System (EGS) program for launch preparations.)

“The spacecraft wasn’t really designed to be on its side nominally so this strongback supports it when it’s in the horizontal. That gets a soft cover put over the top of it, an environmental cover, and then what we call ‘boat wrap’ which is just if you’ve seen a boat transported down the highway it’s got that shrinkwrap over it, it’s kind of a double wrapping.”

The Super Guppy landed at KSC’s Launch and Landing Facility (formerly the Shuttle Landing Facility) on the afternoon of March 25 and the spacecraft was quickly moved back to the O&C Building. “We offloaded the day that we landed at the runway, brought it back to the O&C, and then once we’re in the O&C the operations kind of reverses the things I talked about at Plum Brook,” Wilson said.

“We take the boat wrap off, we take the soft cover off, we disassemble some of that shipping frame and then we rotate it back to vertical. And then, of course, we picked it up and put it back in the FAST cell.”

After a big move of a fragile package, the first item on the return work agenda was checking to make sure all that packaging prevented any damage during the trip. “The first part of those inspections we’re taking off some of the hardware like the outboard walls, which are the walls that are on the outside of the Crew Module Adapter (CMA), and we’re doing some inspections just to verify that everything was OK during shipping and test,” Wilson noted.

“We’ve also taken off the forward bay cover and we’re doing inspections in the forward bay area which is where the parachutes are and the CMUS (Crew Module Uprighting System) tanks, the tanks that fill the uprighting bags when we land and so we’re inspecting all those areas. That’s going on today.”

Wilson said the Lockheed Martin and NASA ATLO team will now run the back half of a before-and-after set of tests to check that the spacecraft behaves the same as it did before it left Plum Brook. “At Plum Brook, before we shut down we did a final test to make sure all the systems are working and then after shipment you want to do the same kind of test, to make sure that nothing has changed and you didn’t damage anything,” he explained. 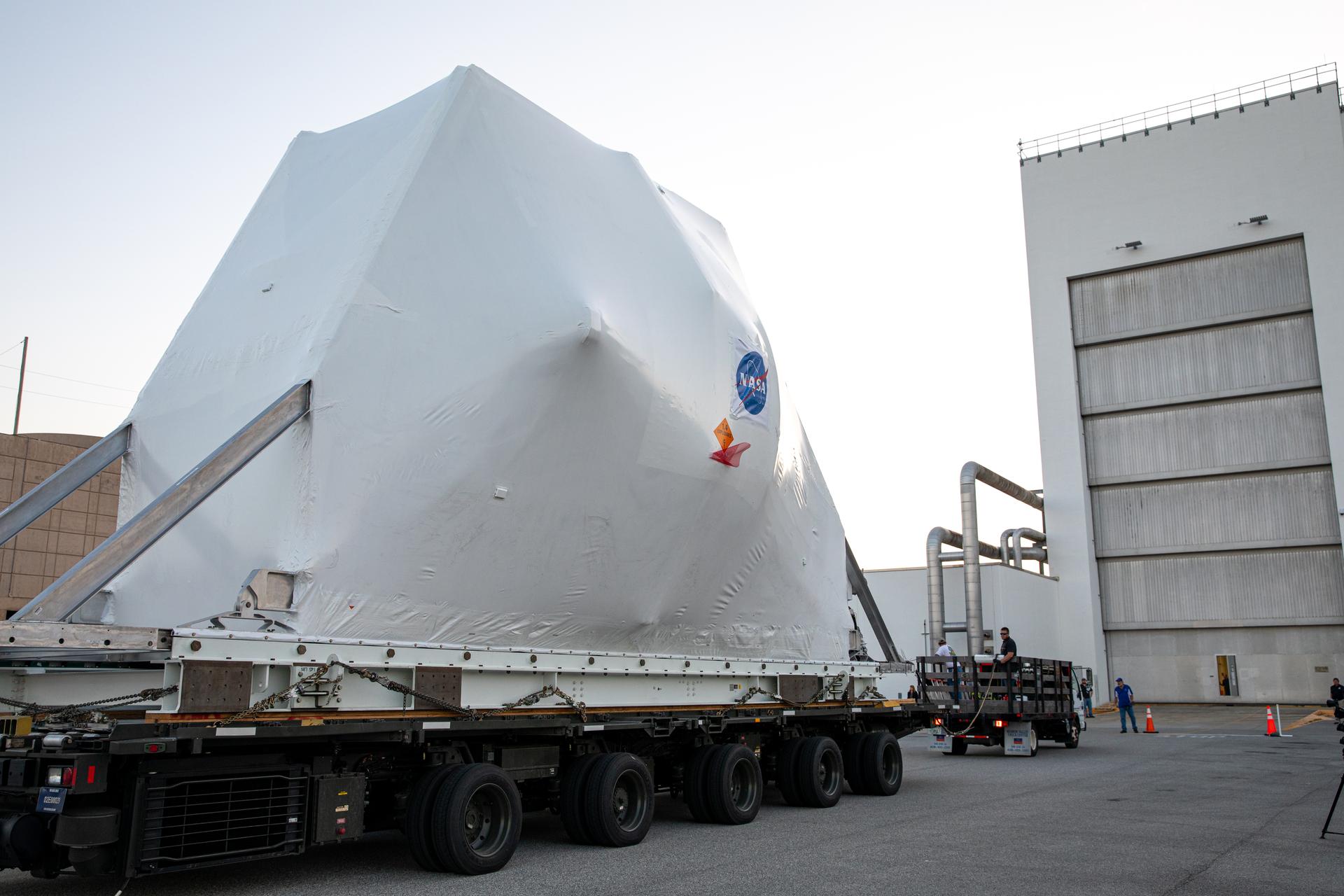 (Photo Caption: Inside its horizontal transportation container and packaging, the Artemis 1 Orion spacecraft arrives back at the O&C Building at KSC on the evening of March 25. It was flown from Mansfield, Ohio, to KSC earlier that day following four months at Plum Brook Station undergoing thermal vacuum and EMI testing.)

“We don’t believe we did but that’s always part of our post ship [process], so that’s the work that we’re getting ready to configure into. I think we’ll be starting that work either Sunday or Monday (April 12 or April 13) and that’ll be about a week’s worth of testing that will go on.”

The testing at Plum Brook was a first for the program. “I think we were all a bit nervous when we put a first-time spacecraft into a test like that and what you’re going to find and how it’s going to go but we’re really pleasantly surprised,” Wilson said.

Artemis 1 will be the Orion program’s second test flight, but the first with a functional Service Module; the Exploration Flight Test-1 (EFT-1) mission flown in December, 2014, tested a working, but uncrewed Crew Module with mass simulators for the Service Module. Instead of two Earth orbits riding on a Delta 4 upper stage on EFT-1, on Artemis 1 Orion will fly solo for the first significant period of time after SLS places it on a lunar transfer trajectory.

The spacecraft is expected to fly for almost four weeks, getting itself into and out of a distant retrograde orbit of the Moon before returning to Earth, but the mission could last close to six weeks depending on the time of year it flies. The spacecraft was set up in an in-space configuration at Plum Brook and Orion spent forty-seven days at vacuum in the chamber there, followed by two weeks of electromagnetic interference testing.

“Before we did the thermal vacuum test we had models that would predict how quickly the vehicle heats and cools in the vacuum environment when you have the thermal control systems up and so we learned that we can heat and cool the vehicle quicker than our models initially predicted,” Wilson explained.

“That’s not an anomaly it’s just understanding the performance of the spacecraft the first time that’s it’s ever been in that environment and so that data lets us do a couple of things. The first is now that we’ve got the real data for how the actual spacecraft performs, heats and cools, we can feed that back into our models and then those models will be used to help us with the onboard software [and] the active thermal control system.” 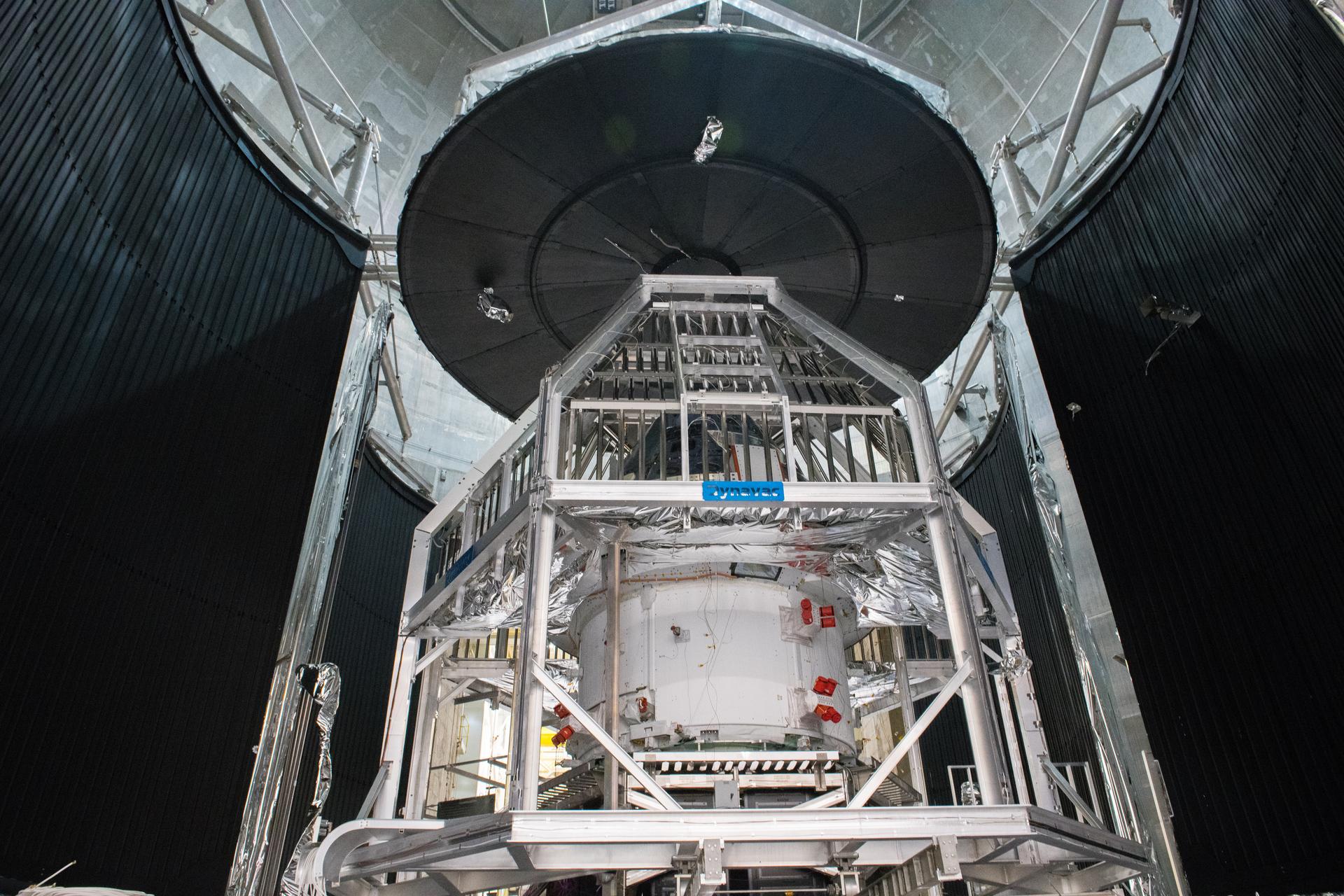 (Photo Caption: The Orion spacecraft in the thermal vacuum chamber at Plum Brook last December. The spacecraft was surrounded by a heat flux system to simulate in-space thermal conditions while its surroundings were at vacuum and a cryo shroud, seen here with its doors open. The system allowed different parts of the spacecraft to be heated externally by the heat flux system while the rest of the environment was chilled by the cryo shroud. The spacecraft’s own system of heaters was tested during cold stress conditions during thermal vacuum testing. Both hot and cold stress conditions were tested during the campaign.)

“It’ll help us better predict when to turn on heaters and turn off heaters or flow cooling through radiators and that sort of thing,” he added. “That’s probably the biggest thing that we learned there.”

“On the EMI/EMC (electromagnetic interference/electromagnetic compatibility) side of it we do two parts to that test,” Wilson continued. “First we powered up all the different systems on the spacecraft and did really kind of a self-compatibility check, make sure that anything that’s creating RF (radio frequency) energy isn’t interfering with other systems on the spacecraft and that went really well, no surprises there.”

“Then [for] the second part of that test we have external amplifiers, antennas that essentially blast RF energy at the spacecraft at various frequencies and energy levels to make sure that external sources aren’t going to interfere with the spacecraft and that went very well, too. The things we probably learned a little bit are around certain frequencies some of our communications stuff you get a little bit of interference but that’s a known condition, so this test was really meant to find out where the thresholds are.”

“We learned a lot about how the spacecraft performs, but that again was part of the test,” he added.