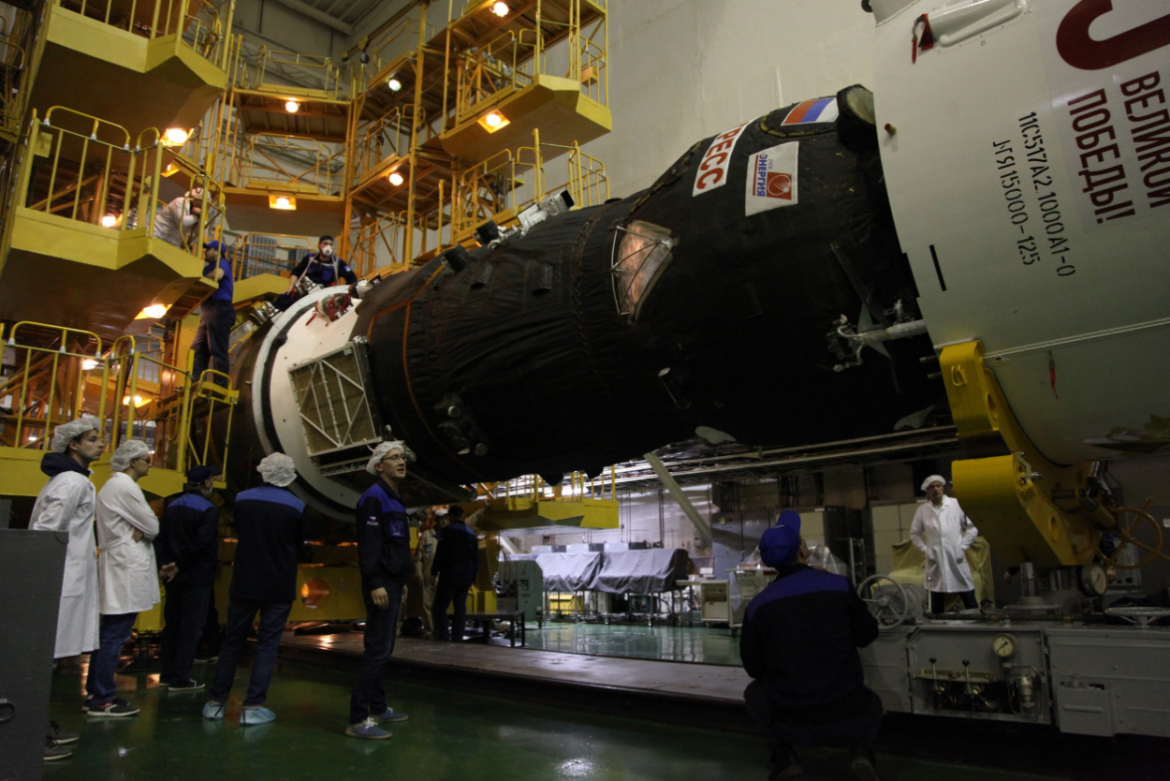 Preparations for the flight of Progress MS-14 are continuing inside its Baikonur facility. Work included checkouts of the vehicle’s solar array panels and fueling of the spacecraft. Roscosmos is targetting the launch of the resupply mission to the ISS on April 25.

The Progress (spelled “Прогресс” in Russian) spacecraft has been a workhorse resupply spacecraft for the Soviet and now Russian space program since its introduction in 1978. 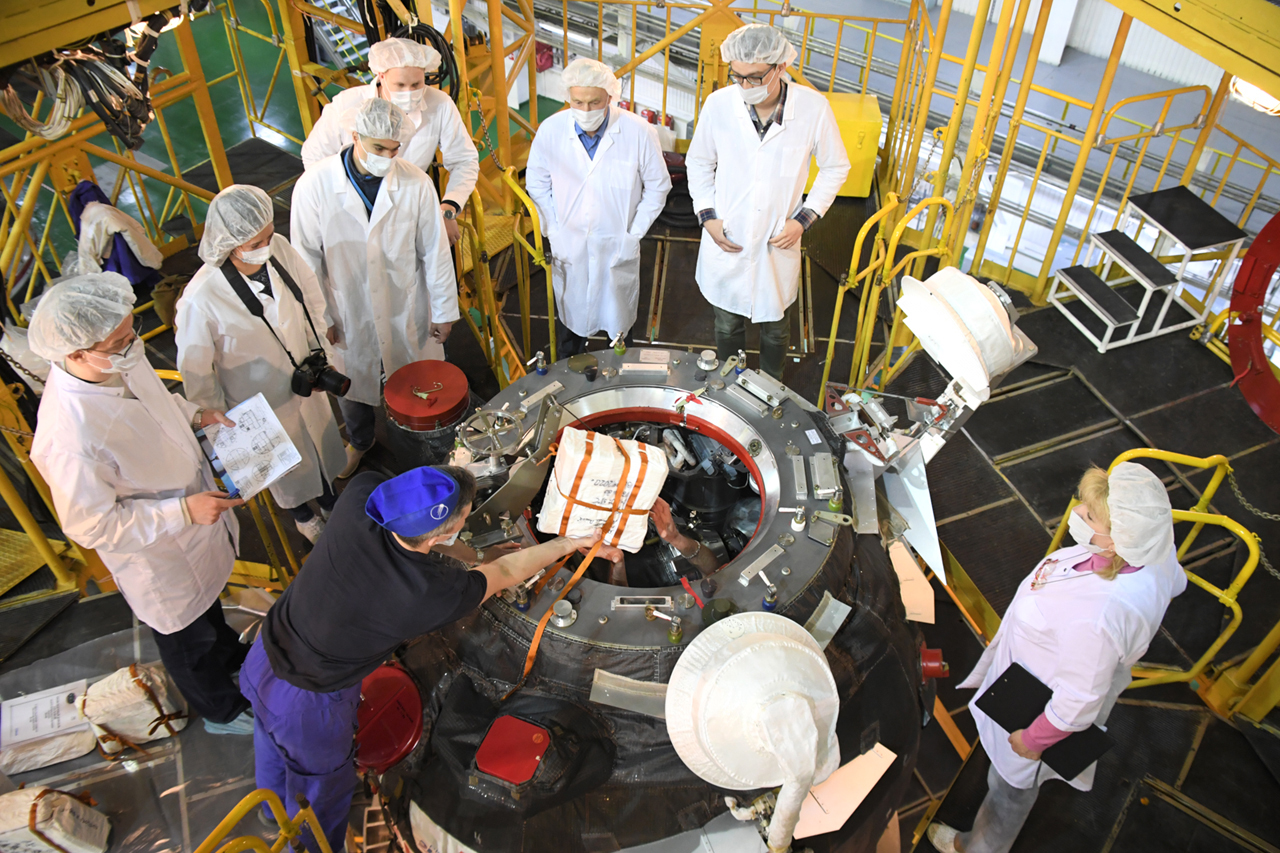 After fueling at the fueling complex, the spacecraft returned to the processing complex at site 254 in Baikonur. The next Progress spacecraft to launch after this one, Progress MS-15, is also being processed in the same facility.

According to Roscosmos, the Russian resupply craft is being filled with around 700 kg of gas and fuel, 1,350 kg of cargo, 420 liters of water, and the standard and necessary items like food and hygiene kits.

On April 16, Progress MS-14 was integrated with the transition compartment, which is designed to connect the spacecraft to the third stage of the Soyuz rocket during launch.

The Transition compartment also allows the fairing to be connected to the launch vehicle. The spacecraft is also protected from the aerodynamic loads and stresses during ascent in the atmosphere by the fairing. 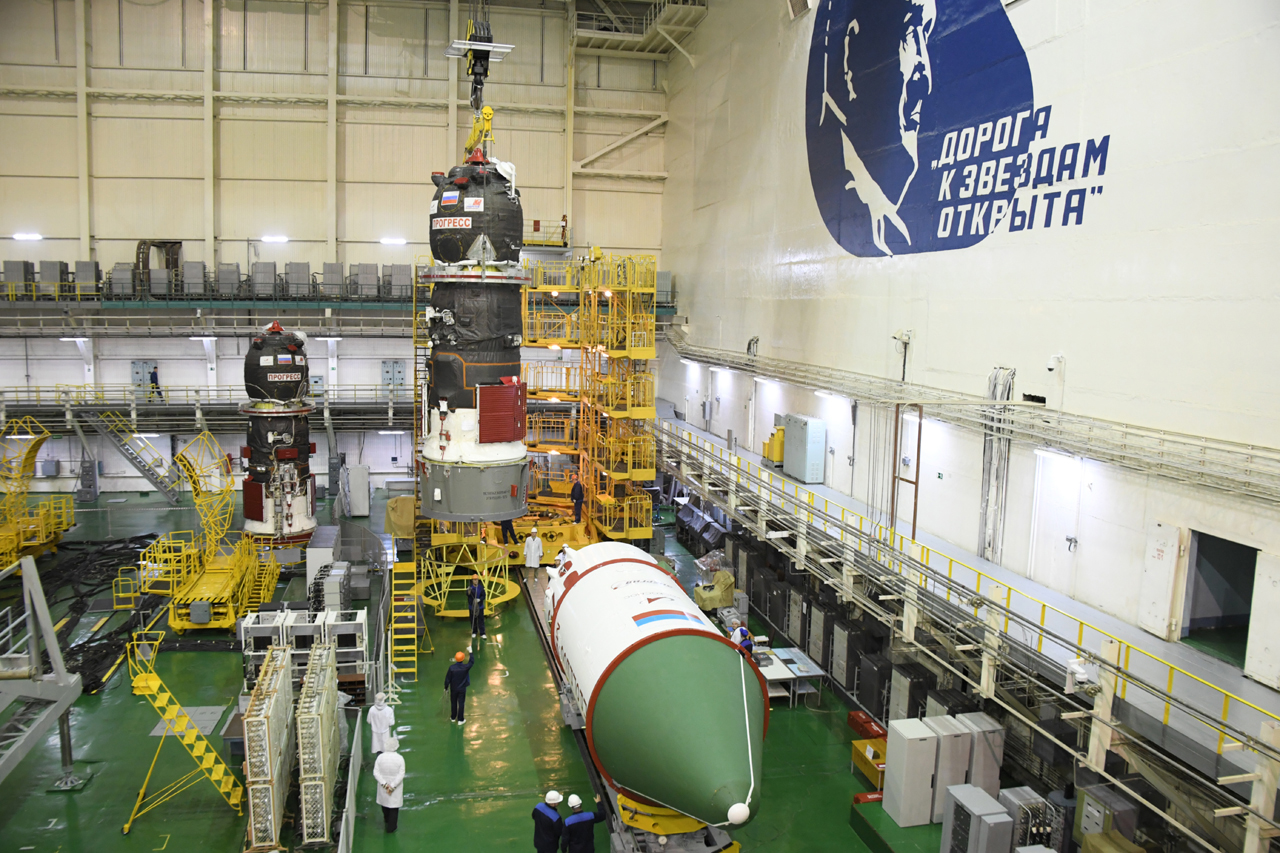 Another special set of items that will go to ISS will be special symbols to recognize the 75th anniversary of Russia’s victory in WWII over Nazi Germany, which invaded the Soviet Union. The Russians call their efforts over the Axis powers as the “Great Patriotic War.” The Russians often use their space missions to mark historical national events.

This individual Progress launch will also be significant because the Soyuz 2.1a that will launch Progress MS-14 has a special paint scheme to honor the anniversary.

“The Roscosmos State Corporation will dedicate this launch to the 75th anniversary of the Victory of the Soviet people in the Great Patriotic War of 1941-1945,” noted an outline from Roscosmos.

“In particular, the Soyuz-2.1a launch vehicle, which was called the Victory Rocket, will be marked with specialized symbols – the logo of the 75th anniversary of the Victory, images of the St. George ribbon and orders of the Patriotic War.”

An animation of the Soyuz 2.1a rocket with the special paint scheme. Photo Credit: Homem does Espaço.

This special paint scheme is one of the few 75th-anniversary commemorations for Russia which will not be affected by the COVID-19 Pandemic.

The Soyuz 2.1a rocket for the launch of Progress MS-14 is being prepared in another building. So far, the first stage boosters have been integrated with the second stage. 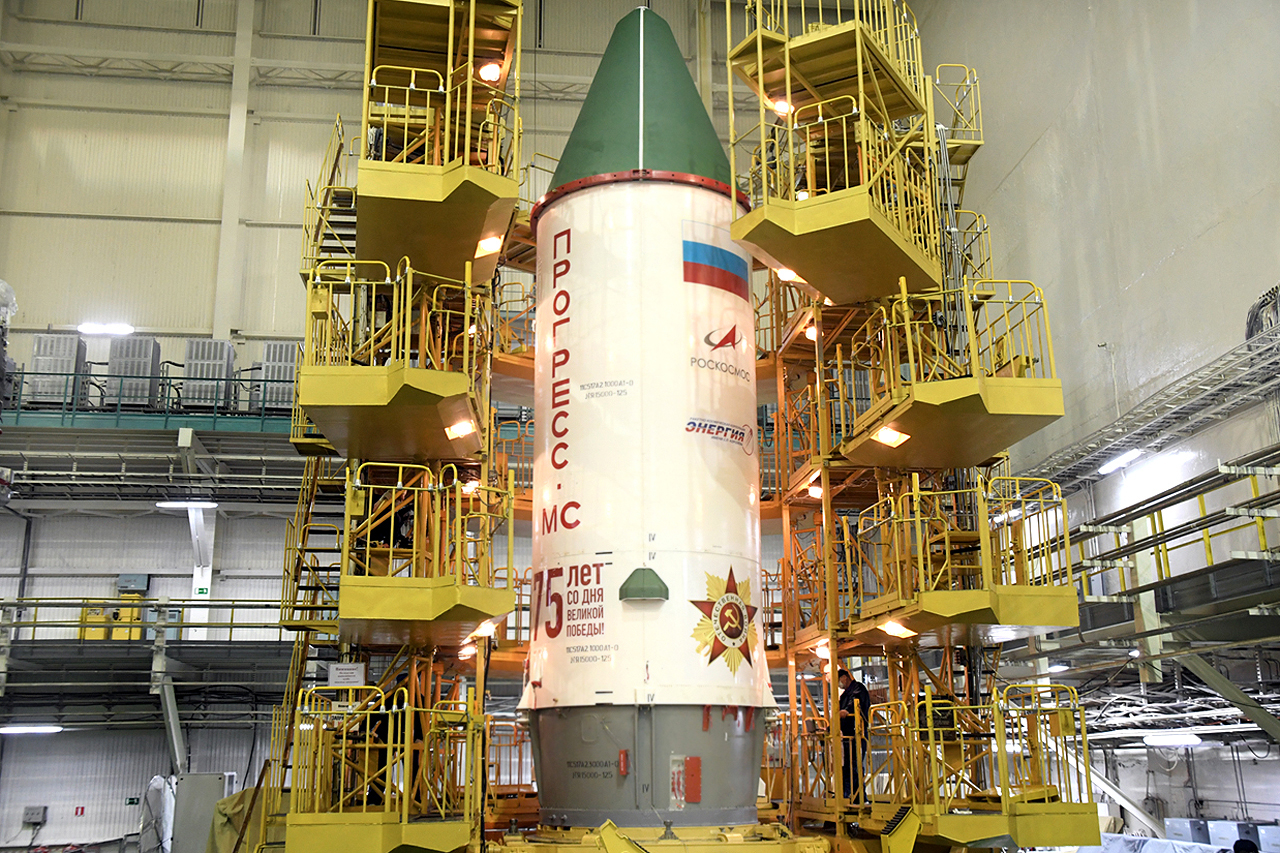 The Progress type of spacecraft was also the last spacecraft to launch on the Soyuz-U rocket. The last Soyuz-U launched Progress MS-05 into orbit on Feb 22, 2017 from Site 1/5 which is also known as “Gagarin’s Start.” The Soyuz-U is the longest-used rocket ever in history.

The last Progress spacecraft to depart the ISS was Progress MS-12. It spent 120 days docked to the Pirs docking compartment until November 29, 2019. Like all Progress spacecraft, it reentered the atmosphere and burned up over the Pacific Ocean filled with trash from Expedition 61.

Progress MS-13 is currently docked to the Pirs docking compartment and has been since December 9, 2019. It is scheduled to depart in July this year.

The spacecraft will launch from site 31/6 at the Baikonur Cosmodrome, located in the Republic of Kazakhstan. This launch comes as 2020 has been a busy year so far for the launch complex. So far, there have been two OneWeb launches and the recent Soyuz MS-16 launch.

Roscosmos has been consolidating all Soyuz and Progress launches from Baikonur on Site 31/6 since the decommissioning of Site 1/5 in September 2019 for the future Soyuz-2M conversion.

The spacecraft will then dock to the aft port of the Zvezda Service Module at 08:13 Moscow time. The aft port of Zvezda is the same port that Soyuz MS-15, (the last crewed Soyuz-FG launch) was docked to for 204 days until the departure of Oleg Skripochka, Jessica Meir, and Andrew Morgan on April 17.

Once docked to the ISS, Progress MS-14 will resupply the Expedition 63 crew which consists of NASA astronaut Chris Cassidy and Roscosmos Cosmonauts Anatoli Ivanishin and Ivan Vagner. Cassidy is currently the ISS Expedition 63 commander.

The next cargo the ISS crew will receive will be from the SpaceX Crew Dragon Demo-2 launch on May 27 with NASA Astronauts Doug Hurley and Bob Behnken.

Prior to workplace closures, SLS was making good progress ahead of opening missions