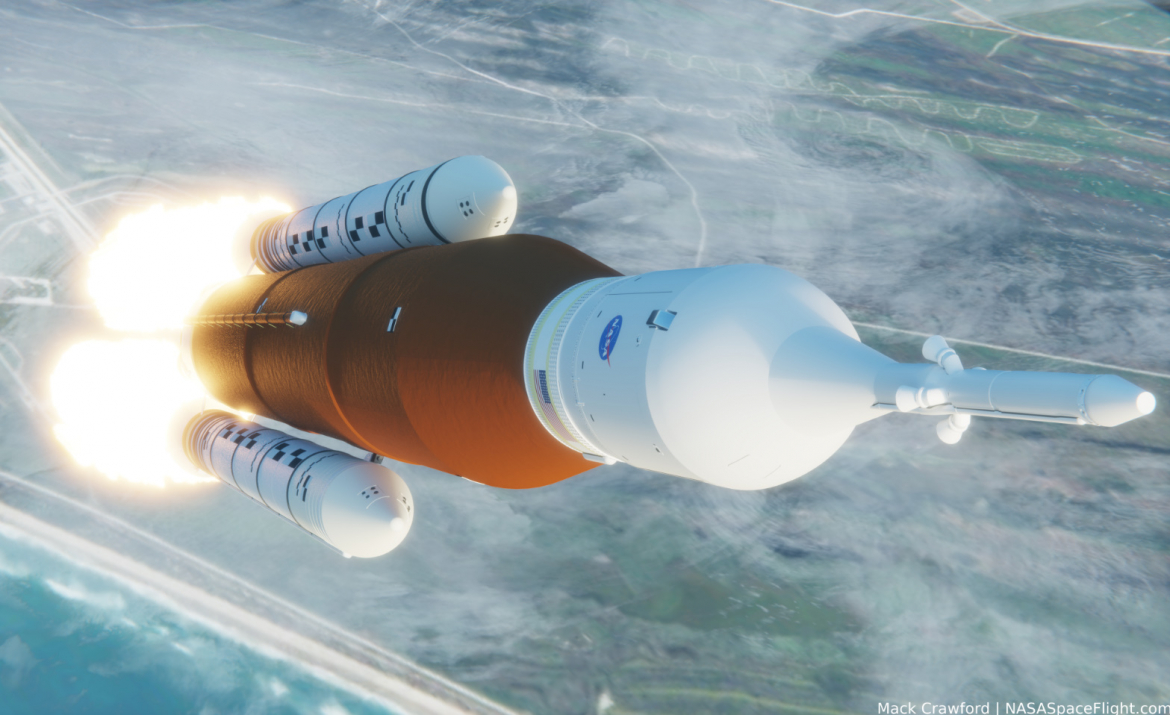 With key worksites closed and activity suspended to protect their workforce from the 2019 novel coronavirus disease (COVID-19), NASA’s Space Launch System (SLS) Program is working on what it can from home. The program’s headquarters at the Marshall Space Flight Center (MSFC) in Huntsville, Alabama, are closed in response to the uncontained virus outbreak.

The New Orleans area was especially hard hit by the outbreak and as a result of the situation the Green Run test campaign on the first SLS Core Stage at the Stennis Space Center in Mississippi was paused in mid-March, as was production of the second Core Stage at the Michoud Assembly Facility (MAF) in New Orleans at the same time.

The SLS Program and its prime contractors, Aerojet Rocketdyne, Boeing, and Northrop Grumman, are continuing other work around the program and around the country with almost the entire workforce working from home under the agency’s response framework, orders from some states, and guidelines issued by the U.S. federal government.

Assembly and processing work continues on booster and liquid engine hardware at contractor facilities from California to Utah to Florida, and development, analysis, and planning for upcoming missions and future designs are being done via telework.

NASA leadership is monitoring the COVID-19 situation and planning how they will gradually return SLS work from the home to the office.

As COVID-19 outbreaks were identified in isolated localities in the United States in February, NASA as an agency and across its portfolio of activities began planning on how to respond to the growing threat to public health. SLS is one of the larger agency programs; although it is headquartered at MSFC, it also has satellite facilities well beyond the center gates, offices at other NASA centers, and works with prime contractors and suppliers across the country.

“About a little over four weeks ago it became evident to me that we were moving into this situation with COVID-19 and I pulled my leadership team together to talk to them relative to where it looked like this was going to head,” SLS Program Manager John Honeycutt said in an interview on April 10. “Then I communicated my expectation that we all as leaders had an obligation to our team and even bigger than that really just socially we had the responsibility to do our part trying to minimize the impact.” 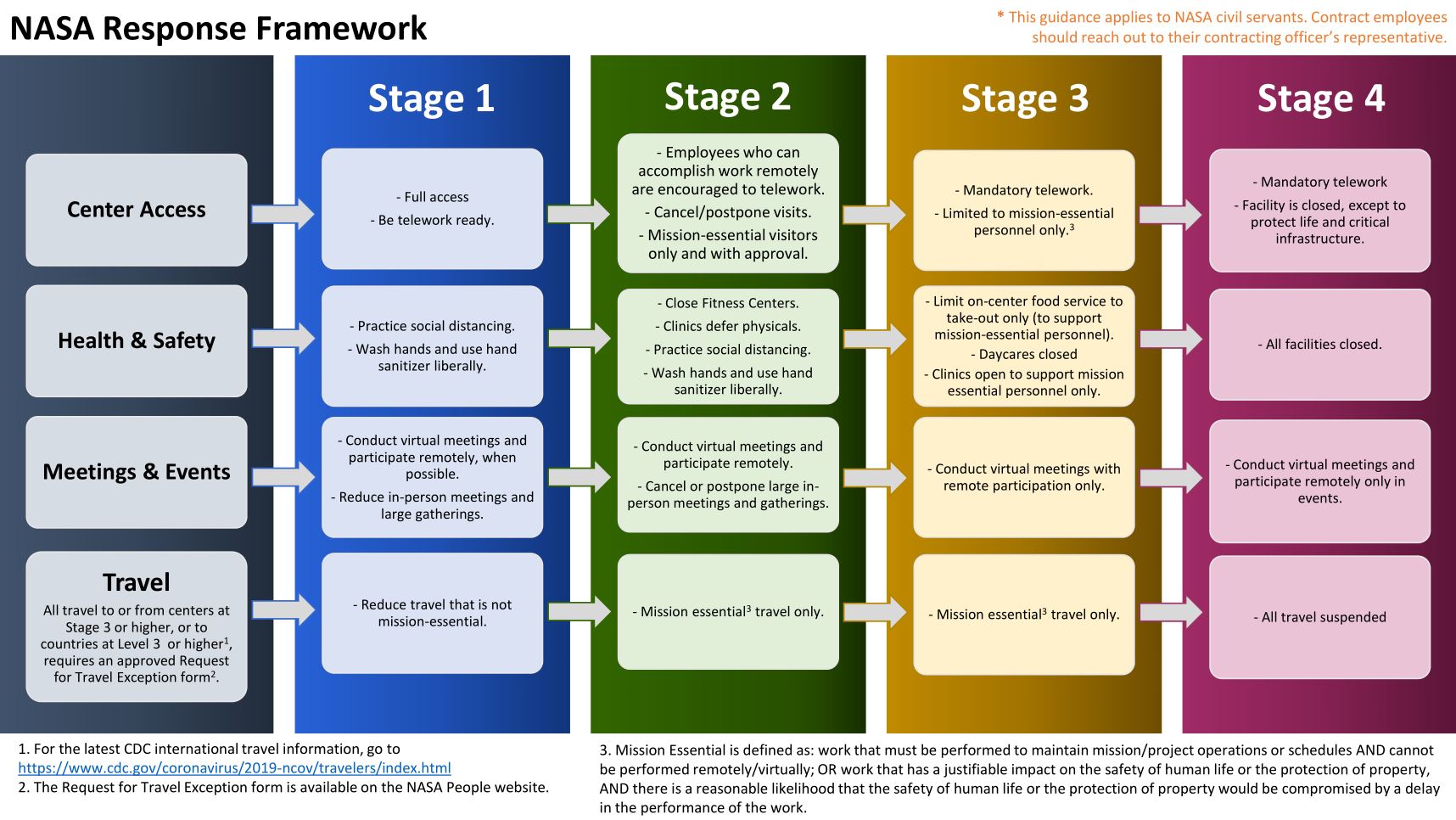 (Photo Caption: NASA’s COVID-19 response framework. Stennis and MAF followed the Ames Research Center as the first locations to move to Stage 4, where those sites are largely closed. MSFC moved to Stage 4 about a week later in late March.)

COVID-19 was declared a pandemic by the World Health Organization on March 11, but by that time the space agency had begun moving as much of its workforce as possible towards teleworking, holding an agency-wide voluntary telework exercise on March 6. MSFC began mandatory telework on March 14, moving to Stage 3 of NASA’s COVID-19 response framework after an employee tested positive for the virus. That followed the Ames Research Center in the San Francisco Bay Area, which had done the same on March 8 when an employee there tested positive.

“While we do not have any confirmed cases of COVID-19 at any other NASA center as of today, March 14, out of an abundance of caution, all other NASA centers are transitioning to Stage 2 of our response framework,” NASA Administrator said in a statement at the time. “Center directors have been in contact with their employees about this status change and steps moving forward.”

The situation and response to outbreaks across the country evolved rapidly in mid-March. Although not as large as the outbreak in the region in and around New York City, broad community spread of the highly-infectious virus was recognized in New Orleans and the surrounding metropolitan area around this time.

All NASA centers around the country were moved to Stage 3 late on March 17 and then two key locations of hands-on SLS assembly and testing work, the Michoud Assembly Facility (MAF) in the city and the Stennis Space Center not far east of there across the border in Southern Mississippi, moved to Stage 4 by the end of the day on March 19 due to the quickly escalating situation in New Orleans.

“For the most part the big impacts to us have been in the New Orleans area where MAF is and then South Mississippi where the Core Stage is in the stand at Stennis prepping for the Green Run test,” Honeycutt noted. “I think if you watch the news you see that area of the country has been impacted more so than any of the other areas where we do work.”

The first Core Stage is installed in the B-2 Test Stand at Stennis, in the middle of the program’s Stage Green Run test campaign ahead of the Artemis 1 launch, which would be the program’s first. Production of hardware for the second Core Stage was transitioning from structural assembly to integration and test at MAF in preparation for the Artemis 2 mission. 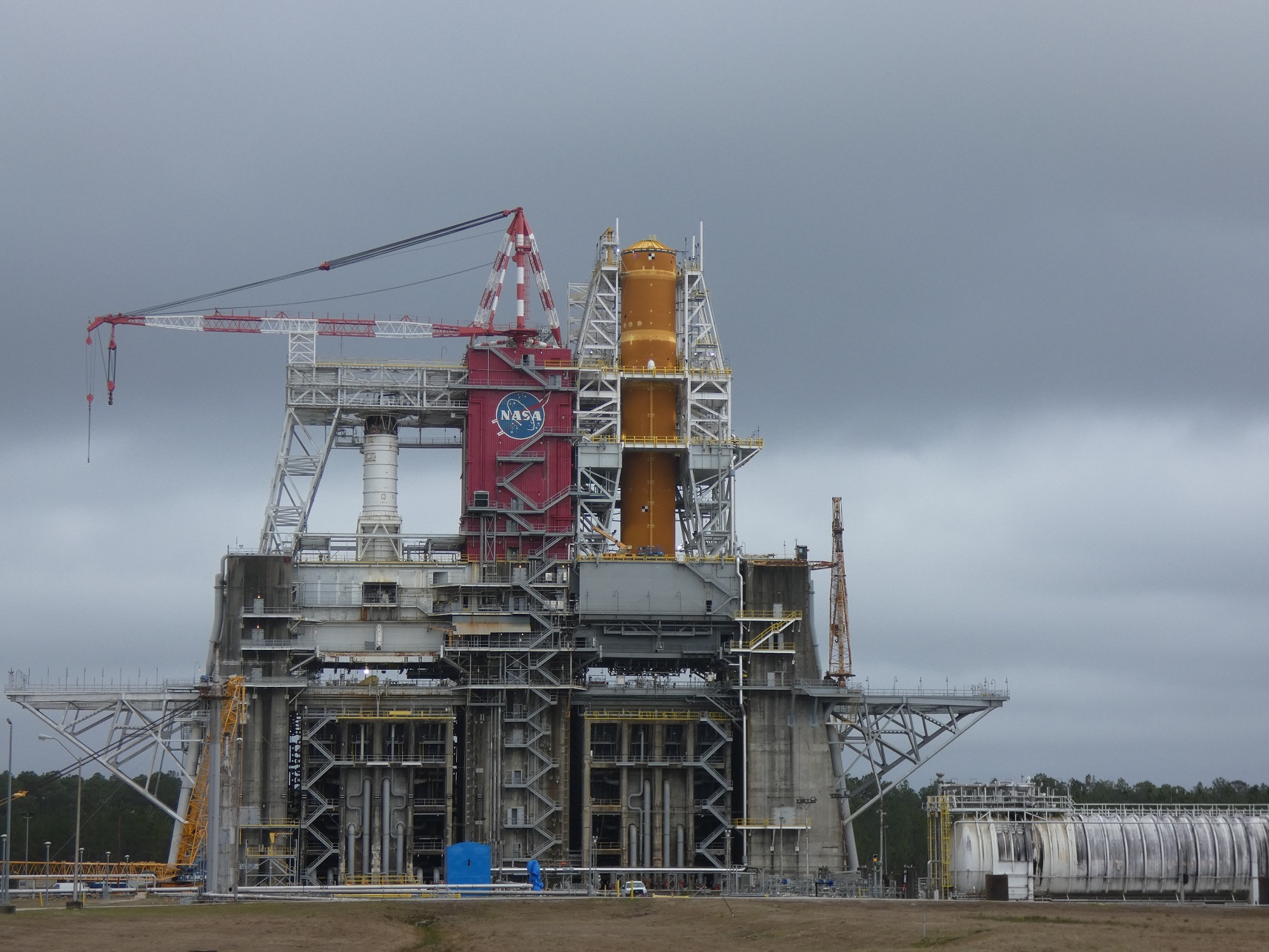 (Photo Caption: Core Stage-1 in the B-2 position at the B Test Stand on February 10. Hands-on NASA work on the stage and related work on the test stand for the Green Run test campaign is suspended; however, work in support of the U.S. Department of Defense continues in the B-1 position on the left. Aerojet Rocketdyne acceptance tests RS-68 engines for the Common Booster Cores (CBC) of United Launch Alliance’s (ULA) Delta 4 launch vehicle. Delta 4 Heavy missions are national security priorities and essential work to prepare for those launches continues.)

“NASA will temporarily suspend production and testing of Space Launch System and Orion hardware. The NASA and contractors teams will complete an orderly shutdown that puts all hardware in a safe condition until work can resume,” Bridenstine’s March 19 statement noted. “Once this is complete, personnel allowed on site will be limited to those needed to protect life and critical infrastructure.”

“We realize there will be impacts to NASA missions, but as our teams work to analyze the full picture and reduce risks we understand that our top priority is the health and safety of the NASA workforce.” With most states under “stay at home” orders and federal guidelines recommending similar social distancing measures extended through the end of April, the shut down of touch labor work at MAF and Stennis will extend well over a month and is likely to last longer.

“I think a lot of our team is so passionate about their work that they’re probably willing to accept more personal risk to make sure that we’re successful with the SLS Program and that’s one of the things that me and my leadership team have done is really look at how we’ve managed that during this period of time and really make it our top priority to take care of our people,” Honeycutt said.

“I’ve been really impressed with how the center got out in front of the COVID-19 situation and how we’ve been able to minimize the exposures and those numbers have been extremely low and that’s a tribute to the team,” he added. “I think you know how valuable our people are and folks that work in human spaceflight have a tremendous amount of capability and experience that’s unmatched across the world and so to me it’s very important to us to protect our people because they are the biggest asset that we’ve got and we’ve got to have them in a healthy situation from a physical and a mental standpoint for when we start rolling out of this COVID-19 situation.”

MSFC moved to Stage 4 of the response framework on March 27.