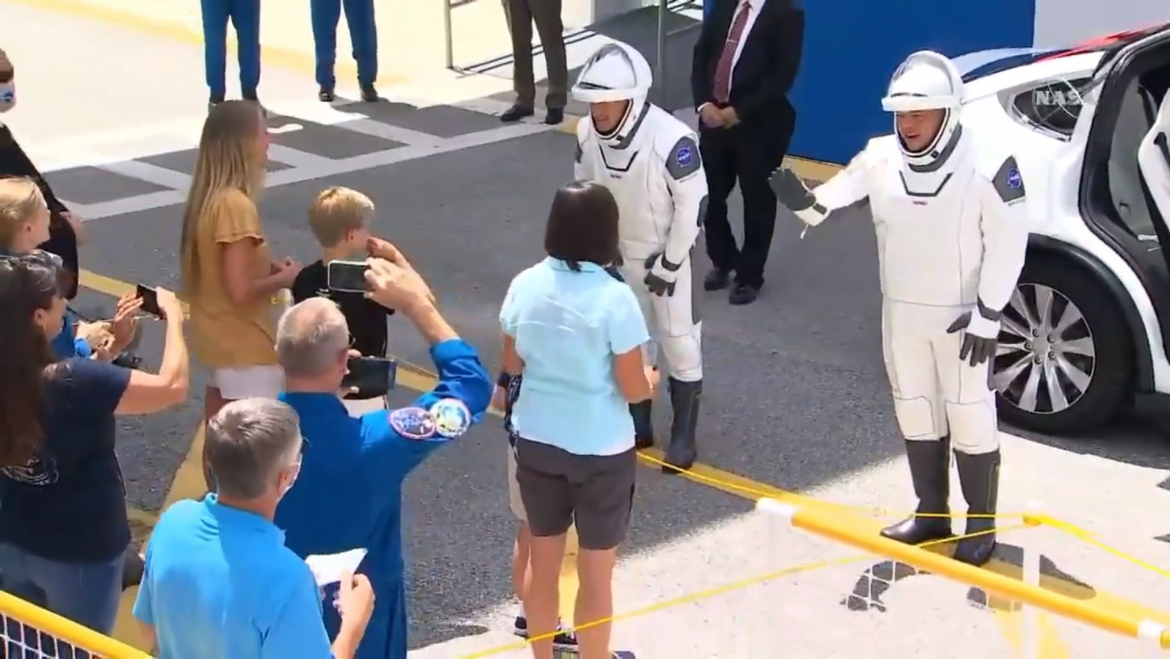 On Saturday, May 30, Douglas Hurley and Robert Behnken became the first astronauts to launch to orbit from the United States in almost nine years. Demo-2 was the first crewed launch for SpaceX, and the culmination of a decade of hard work in NASA’s Commercial Crew program.

20 years ago, Hurley and Behnken were just Bugs. That was the nickname given to the NASA Astronaut class of 2000, of which both Doug and Bob were members. Also in their class were Karen Nyberg and K. Megan McArthur, whom Doug and Bob would marry.

Doug and Bob were selected by NASA, in part, due to their extensive test pilot experience. After all, Hurley was the first United States Marine to pilot the F/A-18 Super Hornet, and Behnken had served as lead Flight Test Engineer for the 4th F-22 Raptor. But over the next two decades, Doug and Bob would be changed forever, into the crew that would fly the newest American spaceship.

Through their two years of training, Doug and Bob became best friends. After completing their evaluations, they eagerly awaited their chance to fly into space. They were first assigned as Astronaut Support Personnel, a group better known as the “Cape Crusaders.” These personnel were tasked with supporting launch and landing operations, including helping their fellow astronauts strap into their seats before launch, and help them out after landing.

In 2003, Doug Hurley was the lead Cape Crusader for the STS-107 mission. Space Shuttle Columbia and her seven crew were slated for a sixteen day research mission to orbit. The mission was long-awaited for, having endured two and a half years of delays before launch.

On January 16, 2003, Columbia stood at LC-39A at the Kennedy Space Center on what would finally be her launch day. The crew of STS-107, commanded by Rick Husband on his second spaceflight, walked across the crew access arm to board their home for the next sixteen days. As the lead Cape Crusader, Doug Hurley was waiting in the white room to help the crew aboard.

According to tradition, the commander of the mission would take the name patch of the lead Cape Crusader with him to orbit, returning the patch upon their return to Earth. As he strapped Commander Husband into his seat, Hurley wondered if Husband had forgotten. But as Hurley prepared to leave Columbia’s flight deck, Husband ripped Hurley’s name patch off of his closeout crew bunny suit, and placed it on the Commander’s side of the cockpit. 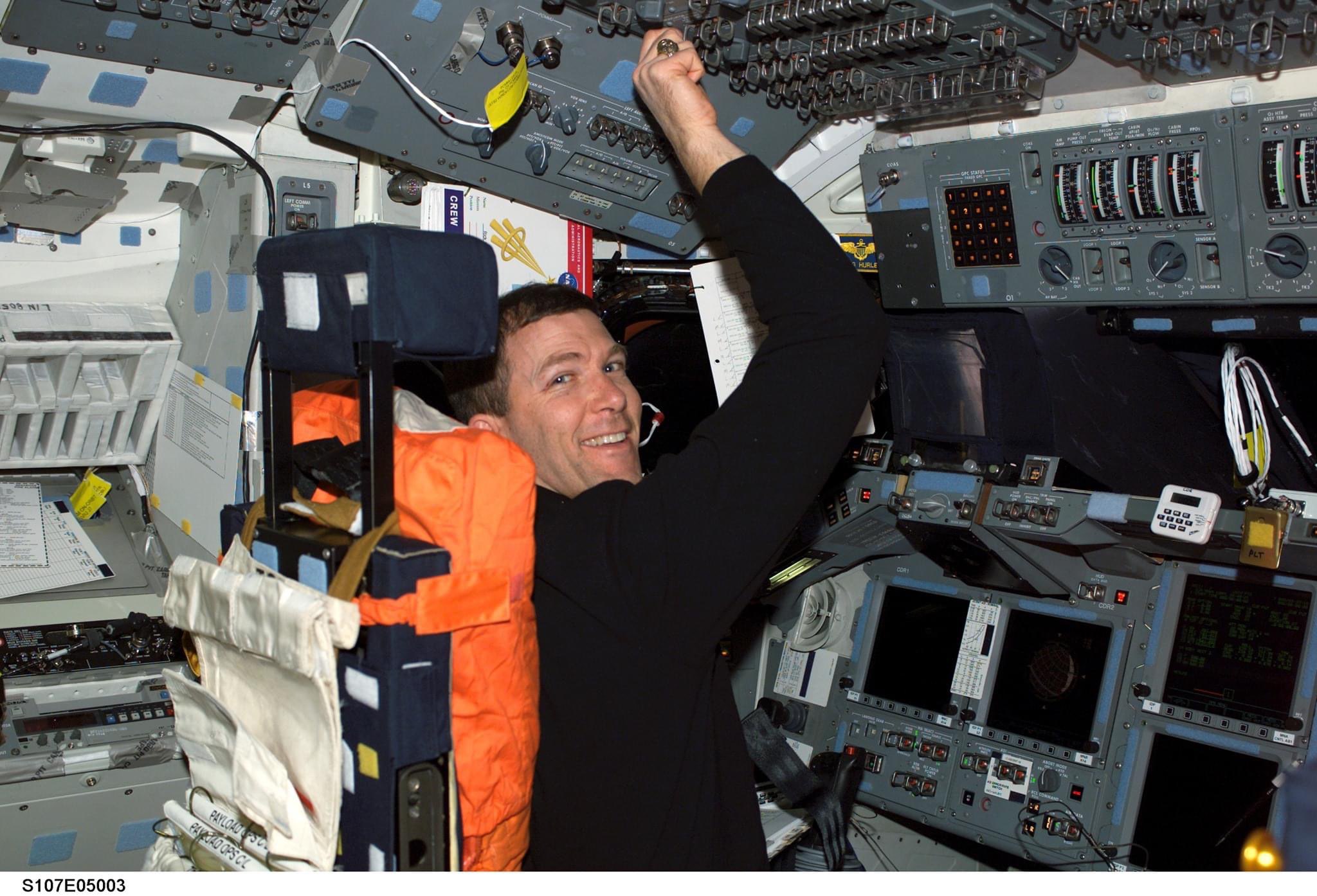 Rick Husband on the flight deck of Shuttle Columbia during STS-107. Doug Hurley’s name patch is visible above Husband’s elbow. – via NASA

In his Shuttle history titled Wheels Stop, Rick Houston narrates a message from Columbia’s pilot Willie McCool, just before Hurley left the cockpit: “I can’t wait for you to be sitting here like I am.”

Hurley and the rest of the closeout crew closed Columbia’s hatch, and departed the launch pad. At 10:39 AM, Columbia, her crew, and Doug Hurley’s patch lifted off to begin their final mission.

On the morning of February 1, 2003, both Hurley and Behnken waited at the space center’s Shuttle Landing Facility to help the crew out of Columbia after landing. The orbiter was expected to touch down on runway 33 at 9:16 AM. Other than a slight concern about fog, the weather at the landing site was good.

When the time of Columbia’s expected arrival came and went, Hurley stood with Kennedy Space Center director and Space Shuttle veteran Bob Cabana as he delivered the tragic news to the crew’s families. Hurley then went with Behnken to the hotel for the astronaut families in order to gather their belongings.

Hurley recounted that day to Houston. “That was excruciating to do that. You were packing notes to parents that the kids had written. I still, to this day, can’t imagine what that must have been like for those families to go through.”

“It has had a sustained and lasting effect on me personally. I don’t know how to explain what exactly it changed, but there was my life before February 1, 2003, and then there was my life after. I think there probably are a fair amount of people here who would be able to say that. Maybe it was youth, my loss of that. Or idealism. Something. It really did have an effect.”

Behnken made his first spaceflight in 2008, aboard Space Shuttle Endeavour, on STS-123. As a Mission Specialist, Behnken conducted three spacewalks to complete assembly of the Canadian Special Purpose Dexterous Manipulator, the part of the Space Station’s robotic arm better known as Dextre. Behnken returned to space in 2010, again aboard Endeavour, on STS-130, where he completed another three spacewalks to install the Tranquility and Cupola modules of the International Space Station.

Doug Hurley first launched to space in 2009, aboard Space Shuttle Endeavour on STS-127. During launch, insulation foam from the external fuel tank fell and struck Endeavour’s heat shield, the same danger which crippled Columbia. Post-launch inspections mandated on all missions after STS-107 revealed no significant damage, allowing Hurley to pilot Endeavour to a safe landing.

Hurley then piloted Space Shuttle Atlantis in 2011 on STS-135, the final flight of the Space Shuttle program, and the last crewed launch to orbit from the United States until Demo-2 on Saturday.

In 2018, NASA selected Doug Hurley and Bob Behnken to be the first crew for SpaceX’s Crew Dragon spacecraft. Demo-2, at its core, is a test flight, designed to ensure all of the spacecraft’s systems can support future crews travelling to and from the International Space Station. So it is fitting that the crew of Demo-2 is a pair of test pilots.

It is also fitting that the Demo-2 spacecraft’s commander, Doug Hurley, flew on the last mission of the Space Shuttle program, bridging the gap in domestic crew launch capability from the United States.

But perhaps the strongest case for Hurley and Behnken is their profound connection to the loss of Shuttle Columbia. In the wake of the Columbia disaster, the United States government mandated that the Space Shuttle fleet be retired as soon as construction of the International Space Station was completed. The job of crew transportation was to be passed on to commercial vehicles, designed to be, above all, safer than the vehicles that came before them.

Crew Dragon is exactly that. Following the completion of Demo-2’s Flight Readiness Review, NASA Commercial Crew Program manager Kathy Leuders announced that SpaceX had successfully met the 1 in 270 loss of crew requirement set for Commercial Crew vehicles. This is approximately three times safer than the post-retirement loss of crew estimates for the Shuttle program, around 1 in 90.

These increased safety factors are thanks to advancements such as Dragon’s launch escape system, capable of aborting from its Falcon 9 launcher at any point during ascent. But even with improved safety measures and designs, there is never zero risk in human spaceflight. A truth that Doug Hurley and Bob Behnken know all too well.

While boarding Dragon for the first Demo-2 launch attempt on Wednesday, May 27, Hurley was seen ripping a SpaceX closeout crew member’s patch off of their uniform, and placing it on the Crew Dragon control panel. The technician working with Behnken was also seen missing their name patch. In the end, no launch occurred on Wednesday, and the crew did return the patches to their owners. 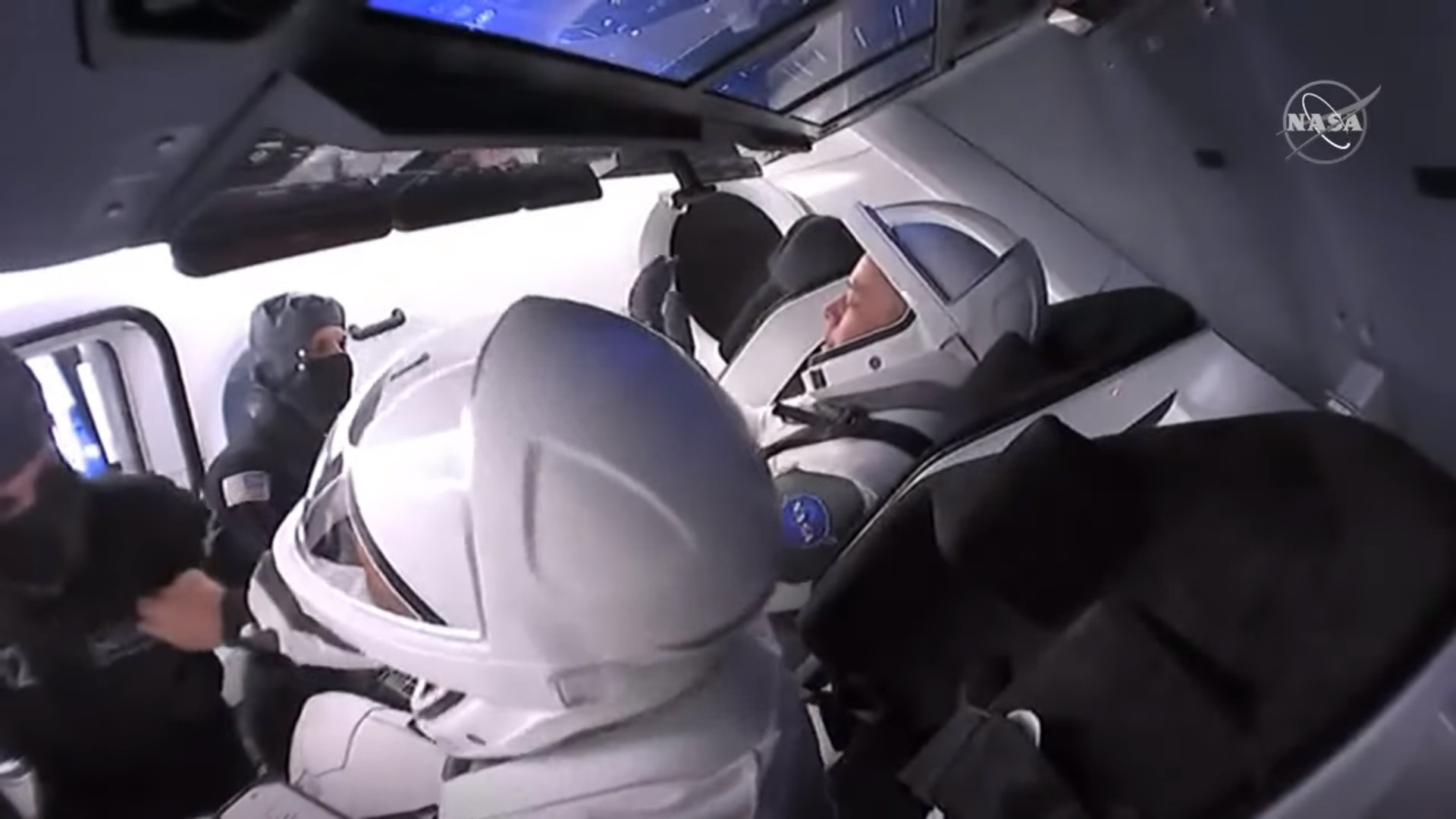 Upon hearing the call for a scrub, Doug told launch controllers on the ground, “It was a good effort by the team, we understand, we’ll meet you there.”

On Saturday, Doug and Bob repeated the tradition. This time, Dragon, her crew, and the stolen name patches, lifted off from LC-39A, beginning a heartfelt journey into history.

Once on orbit, the crew also revealed another tribute to the Shuttle program: the name of their Dragon spacecraft. Doug and Bob agreed to name their capsule after the orbiter that began both of their spaceflight careers: Endeavour.

Over the coming months, Doug Hurley and Bob Behnken will live and work in space. When their mission is complete, they will return to Earth aboard Endeavour. When they deliver those name patches back to their fellow team members, Doug and Bob will have carried on the Shuttle tradition, remembered the tragedy with which they are so closely connected, and paid tribute to the heroes who gave their lives for the betterment and inspiration of humanity.

Dragon Endeavour Docks to the ISS, Bob and Doug Capture the Flag