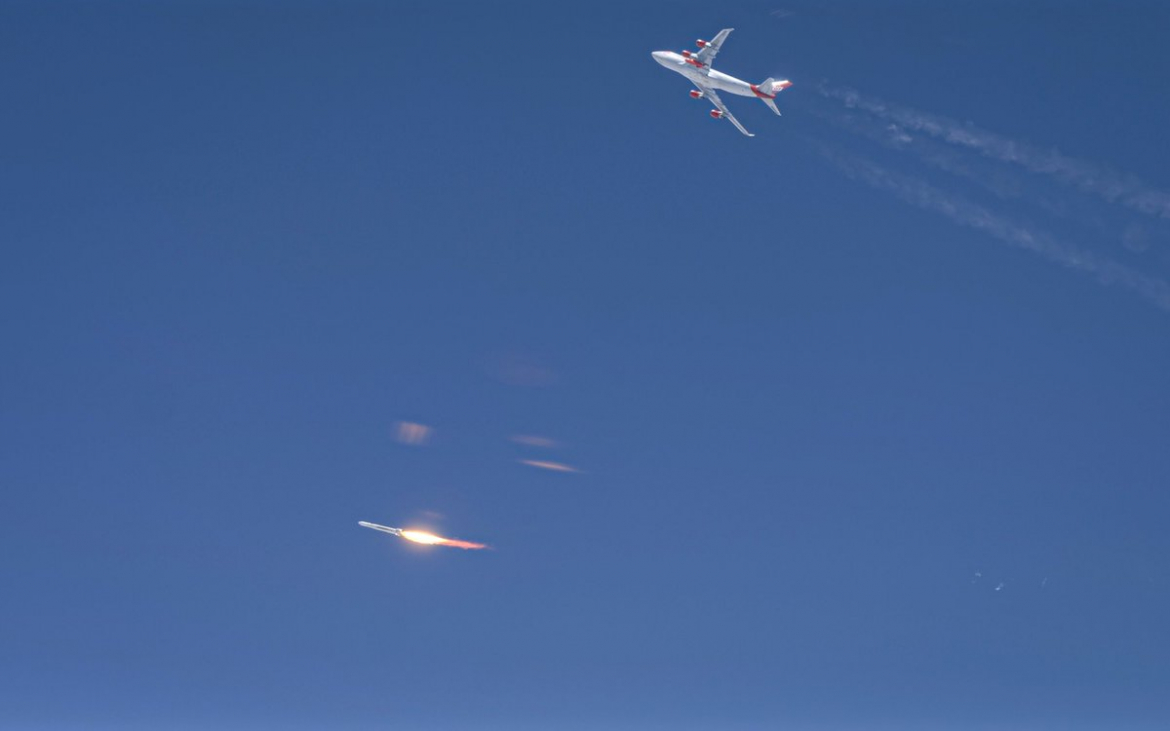 After years of development and testing, Virgin Orbit has conducted its first orbital launch attempt. The maiden flight of the air-launched LauncherOne rocket occurred on Monday, May 25, with the Cosmic Girl carrier aircraft taking off from Mojave Air and Space Port at 11:56 AM PDT (18:56 UTC) and releasing LauncherOne at 12:50 PM PDT (19:50 UTC). However, after release, the mission was terminated due to an anomaly shortly after first stage ignition. The Cosmic Girl carrier aircraft and all of the crew members on board have returned safely to Mojave.

The attempt was originally scheduled for Sunday, May 24, but operations were scrubbed due to a sensor issue. The rocket was fueled completely, and all other components of the countdown were proceeding smoothly prior to the scrub. Fuel was offloaded to address the sensor issue, which was resolved. The countdown was then recycled for Monday’s launch opportunity.

The LauncherOne rocket, intended to serve the small satellite launch market, was air-launched from the Cosmic Girl carrier aircraft while flying over the Pacific Ocean, in a window from 10:00 AM to 2:00 PDT (17:00 to 21:00 UTC). 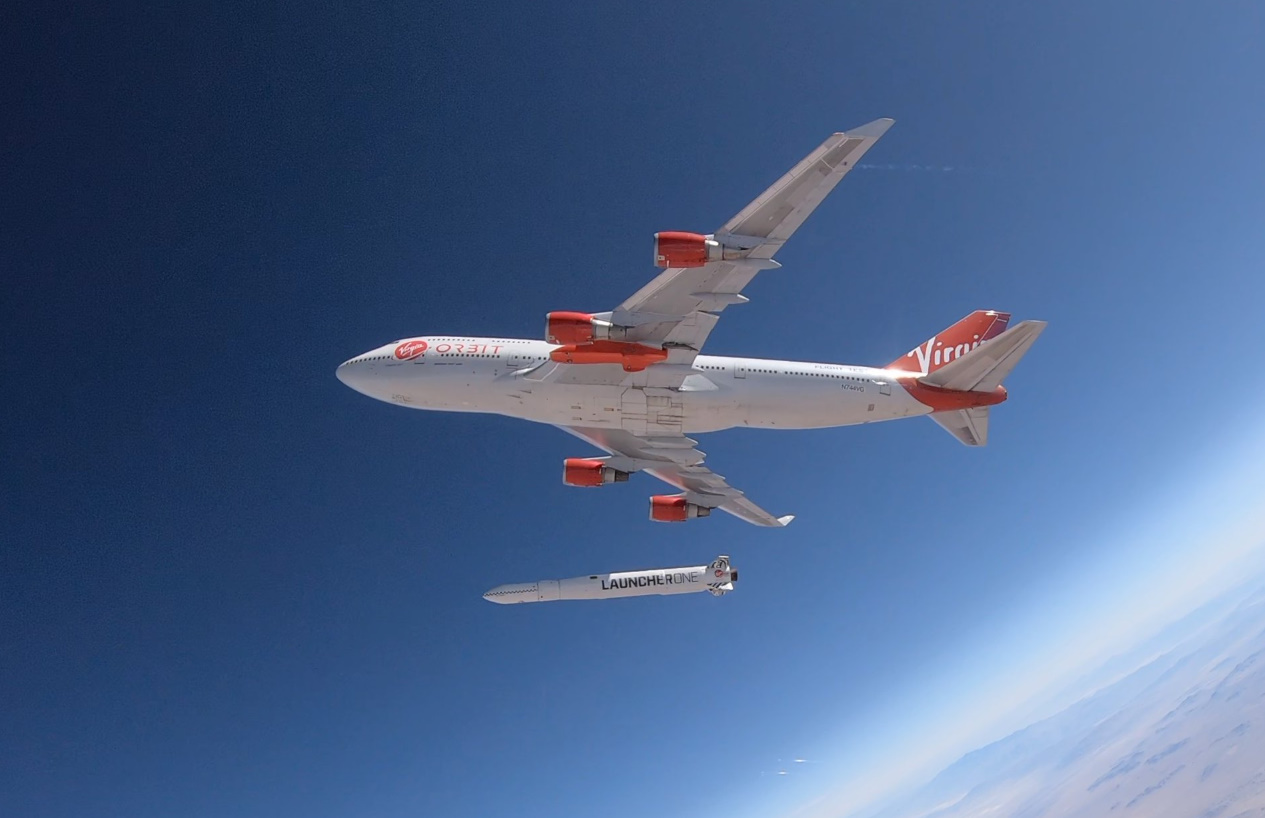 Onboard LauncherOne for the demonstration mission was only a mass simulator. This is commonly done on the first launch of a rocket in order to facilitate the same performance requirements as an operational launch, without risking an operational satellite on an unproven vehicle.

If LauncherOne had reached orbit on its first attempt, the mass simulator would have been deployed into a low enough orbit that the simulator will quickly decay and burn up in Earth’s atmosphere.

To reach that point, there are many previous steps that all needed to go perfectly for the rocket to reach orbit. The Virgin Orbit team is aware of the risks on a maiden flight, and are focused on gaining as much data and learning as much as possible from the flight.

In announcing the demo mission launch window, Virgin Orbit stated that they are “mindful of the fact that for the governments and companies who have preceded us in developing spaceflight systems, maiden flights have statistically ended in failure about half of the time.”

The mission to defy those odds began at the Mojave Air and Space Port in California, where both Virgin Orbit and former sister company, Virgin Galactic, have based their flight test operations. Virgin Galactic and Virgin Orbit split into separate companies in 2017.

While Virgin Orbit expects the majority of their missions to begin in Mojave, they have designed the LauncherOne system to operate from multiple launch sites. Other planned launch sites include the Kennedy Space Center in Florida and Anderson Air Force Base in Guam, as well as sites in England, Japan, and Italy. 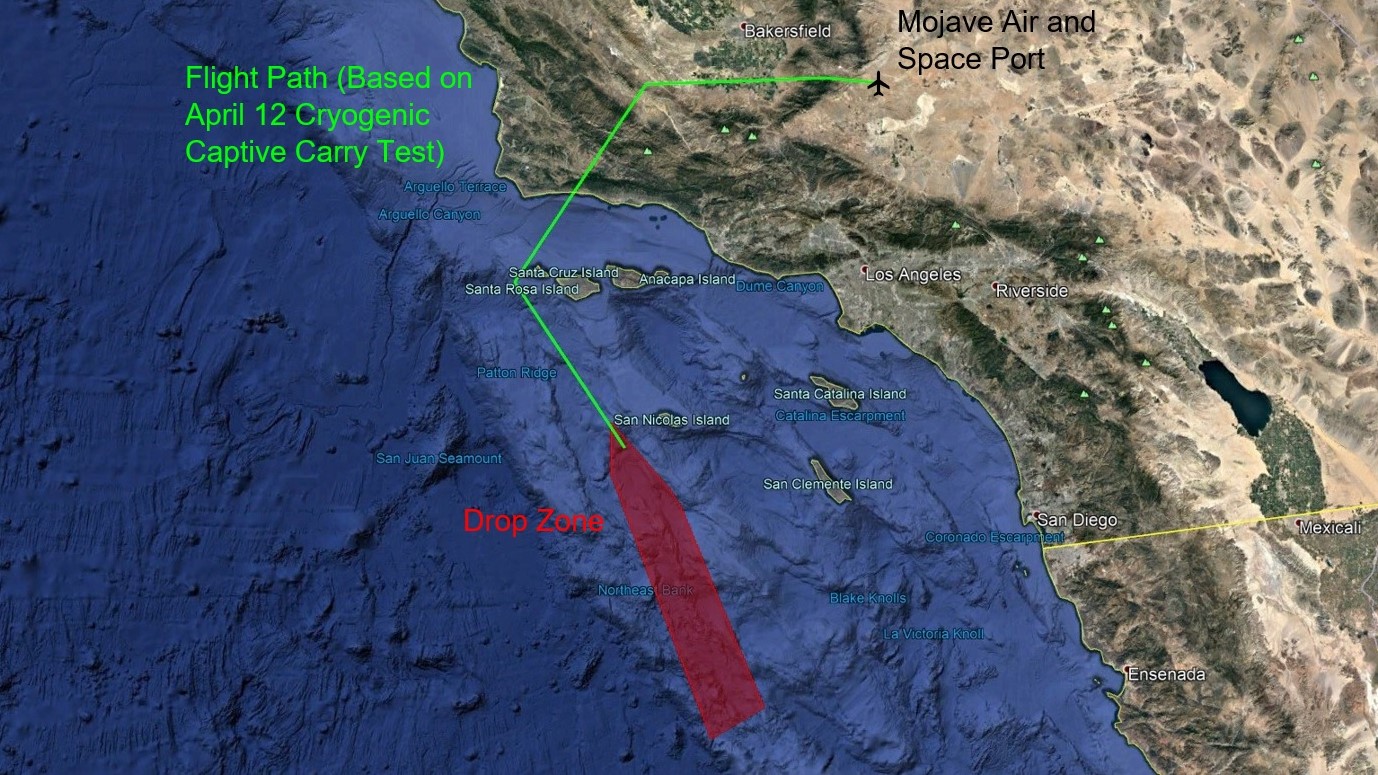 After takeoff from Mojave, Cosmic Girl flew west towards the Pacific Ocean. The Cosmic Girl carrier aircraft is a Boeing 747-400 that was previously operated as a passenger airliner for Virgin Atlantic. The aircraft was delivered to Virgin Orbit in 2015.

Cosmic Girl climbed to an altitude of 30,000 feet before turning south over the ocean towards the drop zone. The launch azimuth for the launch demo is approximately 163 degrees. This would have taken LauncherOne southeast from the drop zone, which is southwest of San Nicolas Island, off the coast of southern California.

Cosmic Girl and LauncherOne conducted one “cold pass” through the drop point to verify all systems were go for launch, including winds in the launch zone. Teams then initiated the terminal count autosequence. Once ready for release, the pilots of Cosmic Girl pitched up 27 degrees to climb to approximately 35,000 feet. At this attitude and altitude, LauncherOne was dropped from Cosmic Girl’s wing.

LauncherOne maintained stability after release, and we ignited our first stage engine, NewtonThree. An anomaly then occurred early in first stage flight. We'll learn more as our engineers analyze the mountain of data we collected today.

After five seconds of freefall, the first stage engine ignited to begin accelerating the vehicle towards space. However, shortly after first stage ignition, an anomaly occurred which resulted in flight termination.

The first stage is powered by the NewtonThree rocket engine, fueled by Rocket Propellant 1 (RP-1) and Liquid Oxygen (LOX). The NewtonThree engine produces 75,000 pounds of thrust. After approximately three minutes of powered flight, fuel levels deplete, and the first stage shuts down.

The first and second stages then separate, and the second stage engine ignites. Powering the second stage is a restartable RP-1 and LOX engine named NewtonFour, which delivers 5,000 pounds of thrust. After stage 2 ignition, the fairing which protects the payload during ascent separates from the rocket. 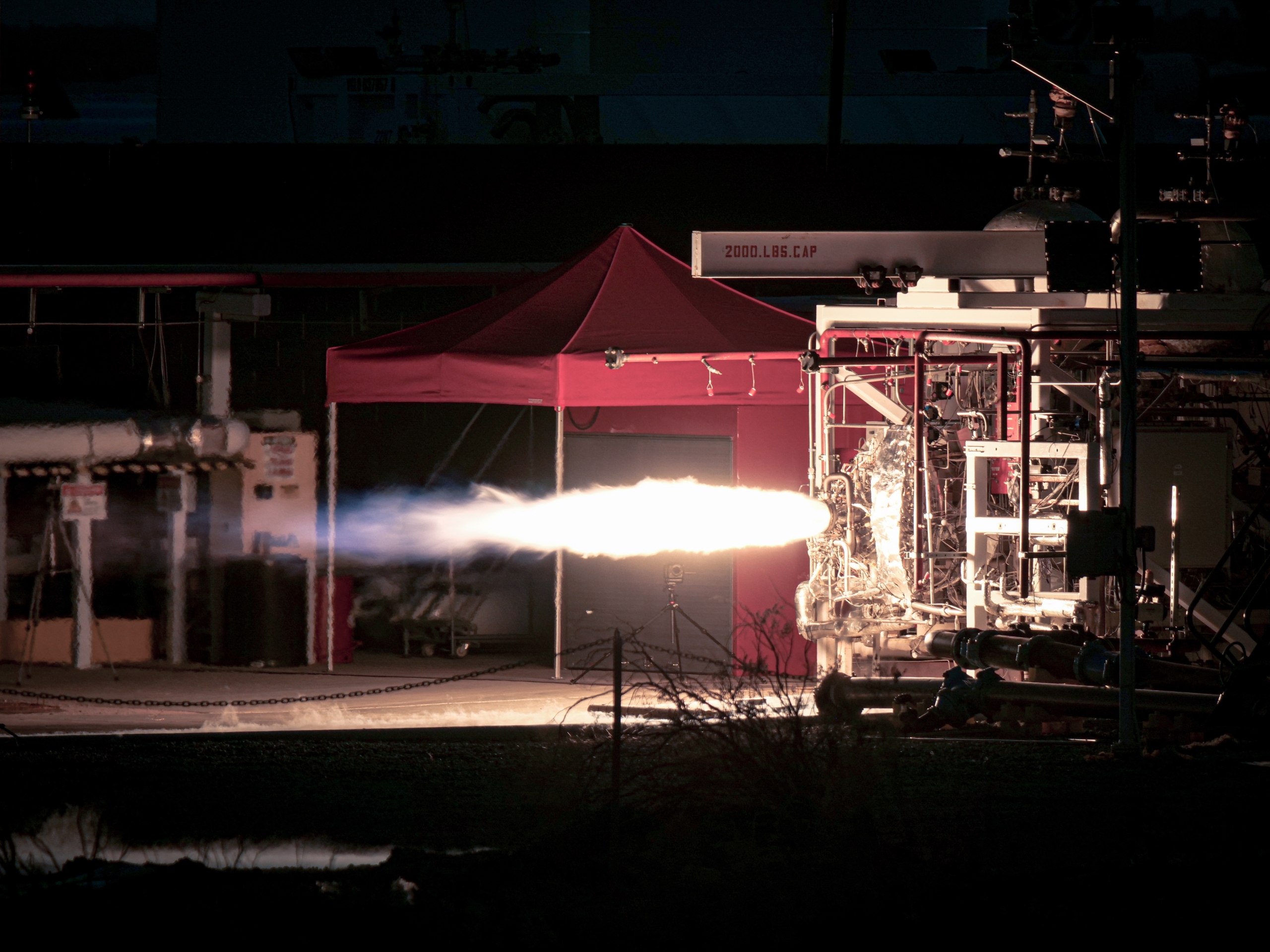 A test firing of the NewtonFour engine – via Virgin Orbit

If all of the previous phases of flight had proceeded nominally, then LauncherOne’s ascent would have concluded with the second stage shutting down in Low Earth Orbit. If the launch was successful, LauncherOne would have become the first orbital-class, liquid-fueled, horizontally launched rocket to reach space.

After payload deployment, the second stage of LauncherOne would have been deorbited to minimize space debris. The mass simulator payload on the launch demo would also have been deployed into a low orbit that would naturally decay due to atmospheric drag relatively quickly.

The LauncherOne system can deliver up to 500 kilograms of payload to an equatorial, 230 kilometer altitude Low Earth Orbit, and up to 300 kilograms to a 500 kilometer Sun Synchronous Orbit. With the addition of an optional third stage, LauncherOne can also deliver payloads to higher Earth orbits, the moon, or interplanetary destinations.

Virgin Orbit has already developed a growing LauncherOne launch manifest. One notable future LauncherOne mission is the ELaNa-20 mission for NASA, which will deliver 10 CubeSats to Low Earth Orbit. Other customers for future LauncherOne missions include the OneWeb satellite internet constellation and the United States military. With multiple launch vehicles progressing through production, including the next one currently readying for system-level testing, a second attempt to reach orbit may occur relatively soon.