At long last, mission to Neptune has decent chance of selection 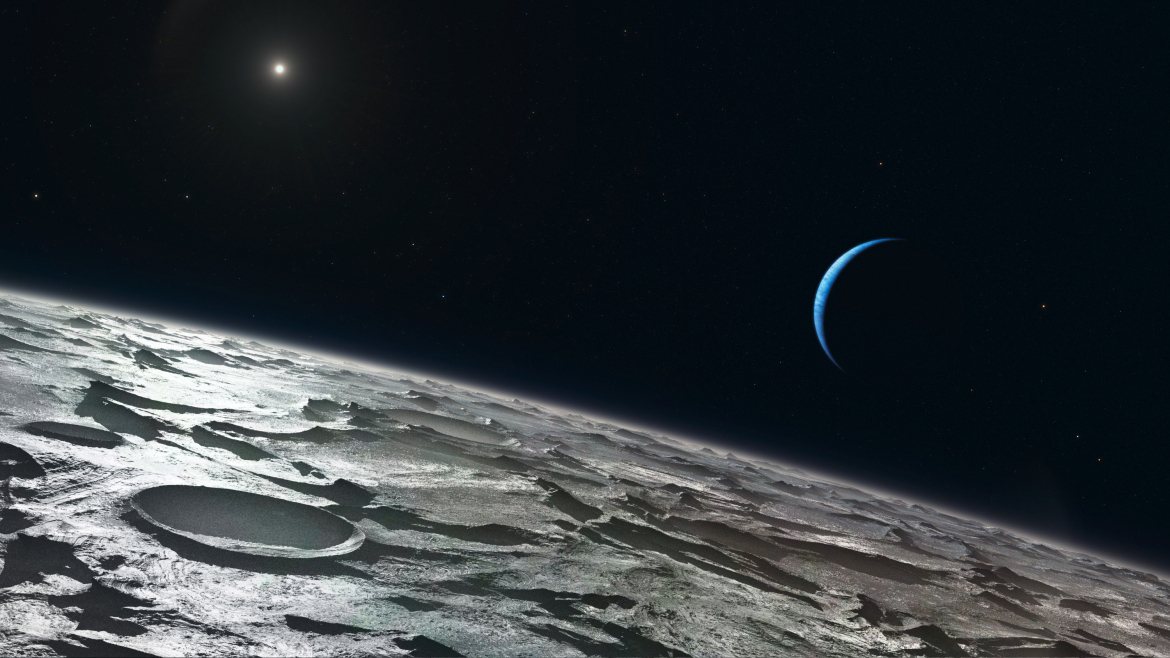 It was 24 January 1986 when Voyager 2 flew by Uranus on its never-ending outbound journey from the solar system.  Three and a half years later, on 25 August 1989, the probe flew past Neptune and became the only spacecraft to ever visit Uranus and Neptune.

After those flybys, the ice giants passed from space agencies’ immediate plans in favor of missions to Mars, Jupiter, Saturn, and Mercury that would largely help human exploration into the solar system.

But why haven’t we been back to Uranus and Neptune?  Certainly those planets are harder to reach than Mars, Jupiter, and Saturn.  But if three of Earth’s prominent space agencies (NASA, ESA, and JAXA) are willing to send three spacecraft on six year journeys just to reach and enter orbit of Mercury and only then begin their actual science missions, why not commit to such missions for Uranus and Neptune?

Part of the problem has certainly been constrained budgets from federal officials and a limited number of missions that can be successfully funded.  But that alone doesn’t explain why none of the proposed missions to the ice giants of our solar system since the 1980s have ever been approved.

The truth is somewhat a mix of two things:

To the first point, it’s not entirely untrue that Uranus and Neptune don’t fit into the larger goals of human expansion out into the solar system — at least right now.  And it’s true to say these ice giants hold no or very little funding appeal to some agencies.

It’s also fair to point out the numerous missions that have been proposed and the noted studies some of them have received.

From the beginning, the Uranus mission was seen as a long shot for immediate funding given the priority on Mars and Jupiter coupled with funding uncertainties, and that meant no realistic way for it to meet the two some-what optimal 2018 and 2020 launch windows and instead wait for the next round of windows in the late-2020s/early-2030s.

Presently, two concept studies of Uranian missions are known to exist within NASA: The NASA Uranus orbiter and probe mission from the Decadal Survey and OCEANUS (Origins and Composition of the Exoplanet Analog Uranus System).

The Decadal Survey orbiter and probe mission carries three profile options (one flyby and two orbital) with transit times to Uranus ranging from 10 years for the flyby mission to 15 years for the orbital mission concepts.

The mission would use optimal launch periods at the end of the 2020s with yearly, three week launch windows.

The second mission, OCEANUS, would require an 11 year transit to Uranus with launch realistically not feasible before 2030 because of trajectory and launch window constraints.

This showcases the other major issue with missions to the ice giants: the transit time to the planets.  Any mission that desires to orbit Uranus or Neptune must, by physics, travel at a slower rate than a probe that would simply perform a flyby. 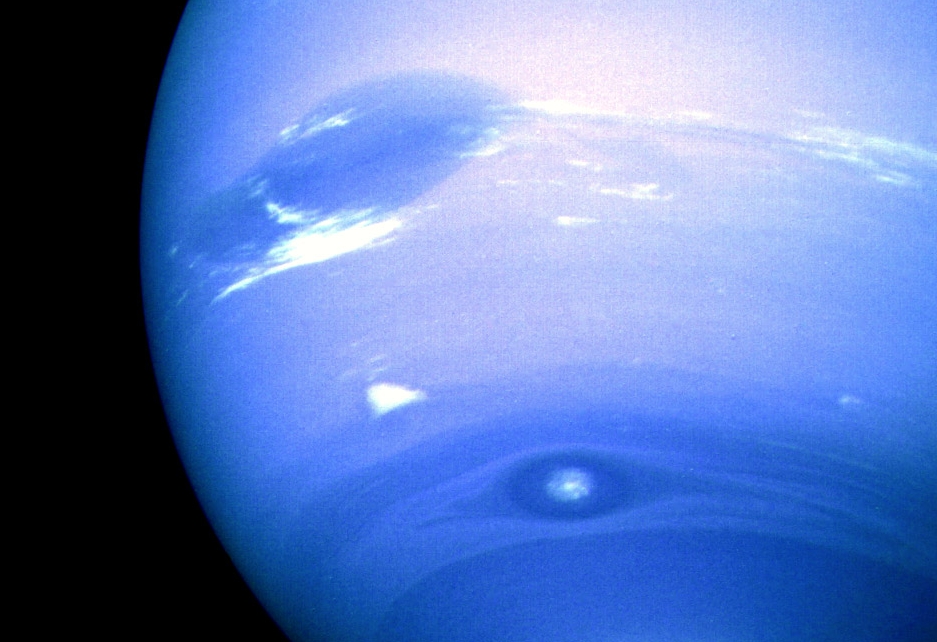 The Great Dark Spot (top) and the Small Dark Spot (bottom) on Neptune, seen by Voyager 2 on approach in August 1989. (Credit: NASA?JP)

But even these “optimal” windows pose challenges.

For example, even a 2030 launch of the OCEANUS mission would require two gravity assist flybys of Venus in 2032 and 2034, one Earth gravity assist in October 2034, and then a final Jupiter gravity assist to actually accelerate the craft in a manner that allows it to then slow down to enter orbit of Uranus in 2041.

That is a lot of complication and risk for a 1.5 Earth year, 14 orbit primary science mission.

And when a Neptune mission is considered, the challenges of navigating a spacecraft to the far-reaching ice giant become even more applicable, with a once-every-13-year launch window for near-perfect alignment with Jupiter to send crafts straight outward from the inner solar system (as New Horizons did in 2006), slingshot them around Jupiter, and get them to Neptune at flyby-only speeds.

The next such optimal launch window to Neptune opens in October 2025.

Trident, the best chance of getting back to Neptune:

Trident is a proposed mission under NASA’s Discovery Program and is one of four missions competing for at most two funding slots.

Like all previous Neptunian missions proposed before it, Trident is competing against missions to higher profile science targets, in this case a mission to Jupiter and two proposed missions to Venus.

The Trident mission would seek to utilize the optimal October 2025 transfer window to Neptune to send a spacecraft on a flyby mission of the ice giant with a specific focus on its icy moon Triton, which is believed to be a captured Kuiper Belt Object.

One of the things that makes this mission so tantalizing to NASA is its uniqueness in focus.

Specifically, the mission seeks to answer a series of questions about Triton, not Neptune, that have confounded scientists since Voyager 2 flew by the moon in August 1989.

That flyby revealed huge, dark plumes of icy material spraying out of Triton’s surface but provided no evidence for what the underlying mechanism triggering this cryovolcanism might be.

What’s more, Voyager 2 images of Triton revealed a young, icy landscape resurfaced over and over again with fresh material.  But what that material was and where it came from could not be answered by the Voyager 2 data.

This has raised the persistent question of how an icy moon so far from the Sun could still be active?  How is Triton’s interior warm enough to still drive this type of cryovolcanism?

Cryovolcanism itself has been an interest since a Jovian moon was shown to be highly active and after Cassini confirmed and directly sampled cryovolcanism ejecta material from the icy moon Enceladus around Saturn. 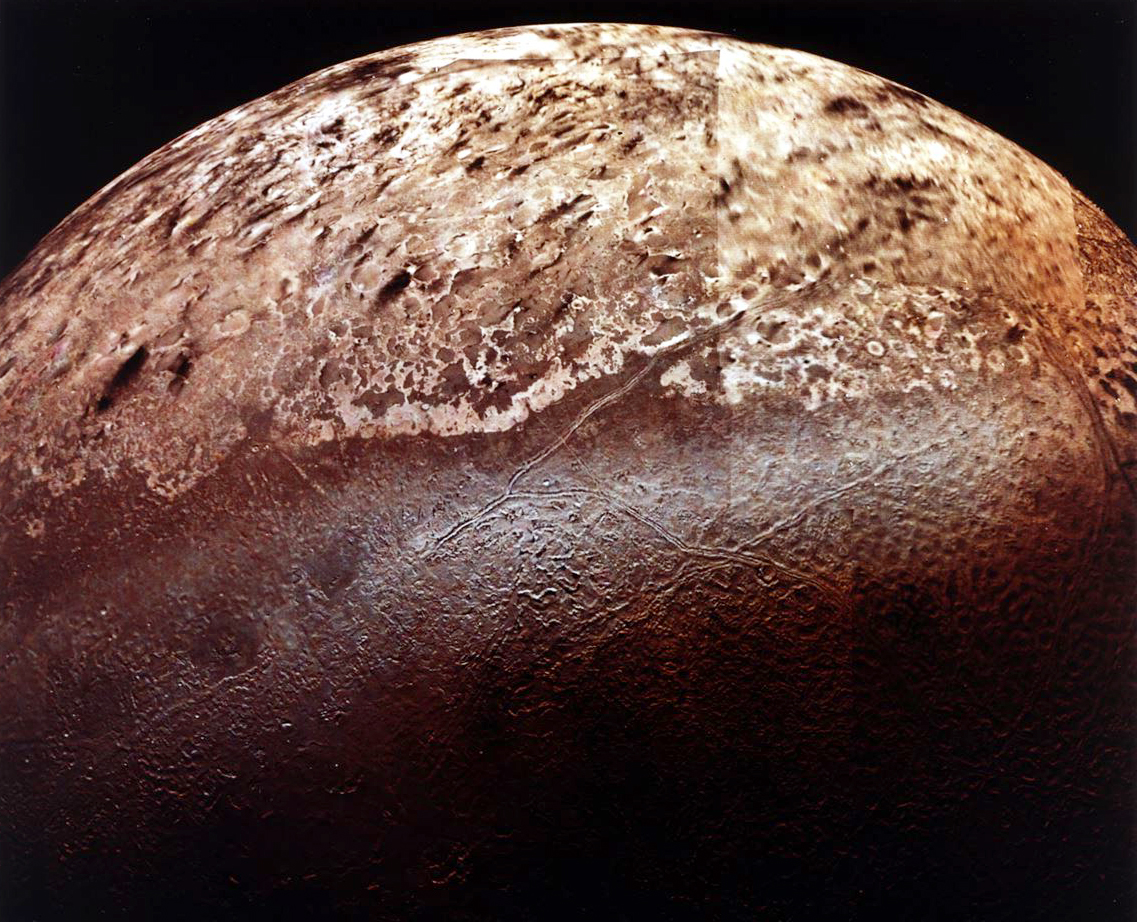 Triton’s bright south polar cap above a region of cantaloupe terrain, as seen by Voyager 2 in 1989. (Credit: NASA/JPL)

What’s more, New Horizons even found evidence of young ice replenishment formations on Pluto’s surface even farther out than Neptune and Triton.

In each of these cases, the underlying mechanisms for volcanism have proven unique. But what makes Triton a fascinating science target in this regard is that if the cryovolcanism is from a subterranean ocean, that ocean would have formed inside Triton after it was captured by Neptune.

Investigating this phenomenon now could help scientists understand where we might find water in the solar system and what bodies are more predisposed to having water than others.

Trident would also map the entire surface of Triton, using Neptune-shine to image the “dark side” of the moon not illuminated by the Sun during the flyby sequence and would carry instruments to measure the moon’s magnetic field to determine if an ocean lies inside, while other instruments would investigate the intense ionosphere, organic-rich atmosphere, and strange surface features, says NASA.

Moreover, Triton’s unusual atmosphere has an ionosphere that is 10 times more active than those on any other moon in the solar system.  Since ionospheres are usually charged by solar energy, and given Triton’s distance from the Sun, this is yet another fascinating and unanswered puzzle scientists seek to explore with the Trident mission.

“Triton has always been one of the most exciting and intriguing bodies in the solar system,” said Louise Prockter, director of the Lunar and Planetary Institute/Universities Space Research Association in Houston and Principal Investigator for the proposed Trident mission.  “I’ve always loved the Voyager 2 images and their tantalizing glimpses of this bizarre, crazy moon that no one understands”.

One thing definitively known about Triton is that it is a captured satellite and did not form naturally with Neptune because it is in a retrograde orbit, meaning it had to form elsewhere and have been captured later.

As Triton is only slightly larger than and has a nearly identical composition to Pluto, the largest-known Kuiper Belt Object, a leading theory is that Triton is a captured Kuiper Belt Object and — just like Pluto — was a binary pair when it encountered Neptune.

The binary was broken apart by gravitational interactions with Neptune, and Triton was captured while its binary was thrown off.

The Nice model, named after the city in France where it was developed in 2005, postulates that the gas and ice giants formed closer to the Sun than their current positions.  What’s more, the model says Uranus and Neptune formed in opposite locations from one another relative to their distance from the Sun, with Neptune being the seventh planet and Uranus the eighth.

The Nice model, the outer planets and planetesimal belt: a) early configuration, before Jupiter and Saturn reach a 2:1 resonance; b) scattering of planetesimals into the inner Solar System after the orbital shift of Neptune (dark blue) and Uranus (light blue); c) after ejection of planetesimals by planets. (Credit: AstroMark, Wikipedia)

As Jupiter and Saturn approached 2:1 resonance, their resonances caused their orbits to perturb and expand outward.  This then perturbed Neptune’s orbit and sent it outward toward Uranus, where the two eventually had a close encounter.

When it was flung out, Neptune plowed through what is now the Kuiper belt, scattered and sowed gravitational chaos through the region and sent thousands of small rocky bodies inward toward the Sun, an event that triggered the Late Heavy Bombardment that afflicted the inner solar system.

Over these millions of years, many Kuiper Belt Objects fell into a 2:3 orbital resonance (known collectively as the resonant bodies, of which Pluto belongs) with Neptune and, if Triton is a stolen Kuiper Belt Object as hypothesized, this would be the most likely period in which the moon was captured.

“Triton is weird, but yet relevantly weird, because of the science we can do there,” said Karl Mitchell, Trident project scientist at the Jet Propulsion Laboratory. “We know the surface has all these features we’ve never seen before, which motivates us to want to know ‘How does this world work?’

“As we said to NASA in our mission proposal, Triton isn’t just a key to solar system science — it’s a whole keyring: a captured Kuiper Belt object that evolved, a potential ocean world with active plumes, an energetic ionosphere and a young, unique surface.”