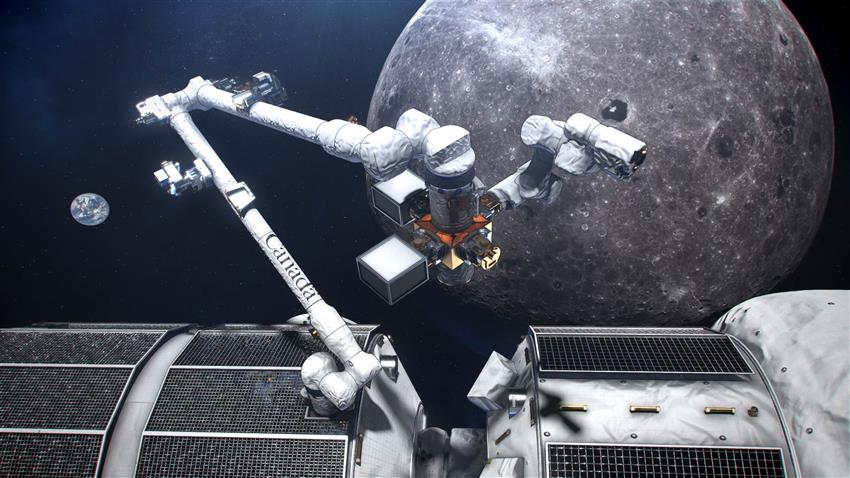 Canada is marching forward with its international partners to establish a permanent research installation near the Moon, the Lunar Gateway.

As it did for the Shuttle and Station programs before, the Canadian Space Agency, via a partnership with MacDonald, Dettwiler, and Associates, Inc., will build the next-generation robotic system: Canadarm3.

This smart robotic system will be Canada’s contribution to the US-led Lunar Gateway station for the Artemis Program, the next major international collaboration in human space exploration — which forms the cornerstone of Canadian space strategy.

“Our commitment to contribute Canadarm3 to the Lunar Gateway will generate high-quality jobs and economic benefits for Canadians,” said Navdeep Bains, the Minister of Innovation, Science, and Economic Development.  “Canada will continue to push the boundaries of human ambition in space exploration, and inspire generations of kids.”

The Canadian Space Agency has over 40 years experience in flagship space robotics programs, having contributed:

MacDonald, Dettwiler, and Associates, Inc. (MDA) will be the prime contractor for Candarm3.  Being at the center of a dynamic ecosystem of innovative small and medium-sized businesses and research organizations across the country, hundreds of Canadian companies are expected to be involved in the development of Canadarm3.

The arm’s development will also involve the application of the Industrial and Technological Benefits policy, ensuring the participation of the broader Canadian supply chain to help motivate investments in key industrial capabilities within Canada’s space sector.

Canadarm3 will be a smart robotic system that will include the next-generation robotic arm, a small dextrous arm, and a set of specialized tools and equipment.  It will be the most sophisticated robotic system ever developed, incorporating advanced artificial intelligence and cutting edge software.

Designed to be highly autonomous, Canadarm3 will be capable of performing tasks without human intervention, including the ability to maintain, repair, and inspect the Gateway, capture visiting vehicles, relocate Gateway modules, help astronauts during spacewalks, and enable science both in lunar orbit and on the surface of the Moon.

The autonomous function of the arm is vital as unlike the ISS Gateway will not be crewed continuously, and communication delays caused by its lunar orbit will prevent direct, real-time control of the arm from Earth.

Despite the built-in autonomy, flight controllers will still be able to remotely manipulate Canadarm3 from Earth (if needed).  Crewmembers on the Gateway will also be able to manually control the arm.

Show us your robots! Canada is a leader in robotics, and we’re going to build the new #Canadarm3. Comment with a 📸 of a robot you built or check out our future space robot for inspiration: https://t.co/cbxBAUKV7E. pic.twitter.com/rZdsqraEcU

At over 8.5 meters when fully outstretched, Canadarm3 is expected to weigh around 715 kg, far less than the 1,497 kg of Canadarm2.

Just like Canadarm2, Canadarm3 will have seven degrees of freedom, which is very similar to a human arm.  It will consist of three joints in the shoulders, one joint in the elbow, and three joints in the wrist.  Each joint will be able to rotate nearly 360 degrees.

Additionally, the arm will be equipped with force-moment sensors, which will provide a sense of “touch,” automatic collision avoidance system, and a 3D Vision sensor tool that will map objects around it.

Astronauts will also be able to repair the arm in space as Canadarm3 will be able to self-detach sections that can then be repaired inside the Lunar Gateway.

With an unloaded speed of operation of 10 cm/s, the arm will be able to move end-over-end to reach many parts of the outpost.

Unlike the four color-cameras on the Canadarm2, Canadarm3 will be outfitted with six 4K color-cameras: two 360-degree cameras on each side of the elbow, one swivel camera on each boom, and the final two on the arm’s “hands”.

“Canada is going to the Moon”

In February 2019, the Canadian government announced the investment of over $2.05 billion CAD over 24 years as part of Canada’s participation in lunar initiatives.  The announcement made Canada the first country and second international partner (behind the supranational European Space Agency, which is providing the service module for Orion) to directly participate in the NASA-led effort to return to the Moon.

“We’re stepping up. … Canada is going to the Moon,” announced Justin Trudeau, Prime Minister of Canada.

LEAP will also help conduct science experiments designed for lunar conditions and prepare for robotic and human missions.  It will also help demonstrate and advance innovative technologies in the fields of health, artificial intelligence, and robotics in lunar orbit, on the Moon’s surface, and in future deep space missions.

Artemis is an ambitious human space program to return permanently to the Moon.  It will land the first persons on the Moon since the 1972 conclusion of the Apollo lunar program.

Under the current plan, astronauts will be launched on the Orion spacecraft atop the Space Launch System (SLS) rocket.

A critical component of NASA’s Artemis Program is the Lunar Gateway, an in-development space station in lunar orbit intended to serve as a solar-powered communication hub, science laboratory, short-time habitation module, and holding area for rovers and other robots.

The Gateway itself will provide vital support for a sustainable, long-term human return to the lunar surface, as well as a staging point for deep space exploration.

While the Gateway project is led by NASA, it is meant to be developed, serviced, and utilized in collaboration with commercial and international partners, including SpaceX, Northrop Grumman, the European Space Agency, the Canadian Space Agency, and the Japan Aerospace Exploration Agency.

At this time, Russia is not officially part of the Gateway (though modules and options for their participation exist in concept), with Roscosmos opting to first determine their own lunar plans before deciding how to participate in the Gateway.

While the Gateway is planned to have many modules contributed by NASA and international partners, NASA has focused Gateway development on the initial critical modules required for a proposed 2024 human lunar landing.

The two main elements needed for that deadline are the Power and Propulsion Element (PPE) and the Habitation and Logistics Outpost (HALO) module. 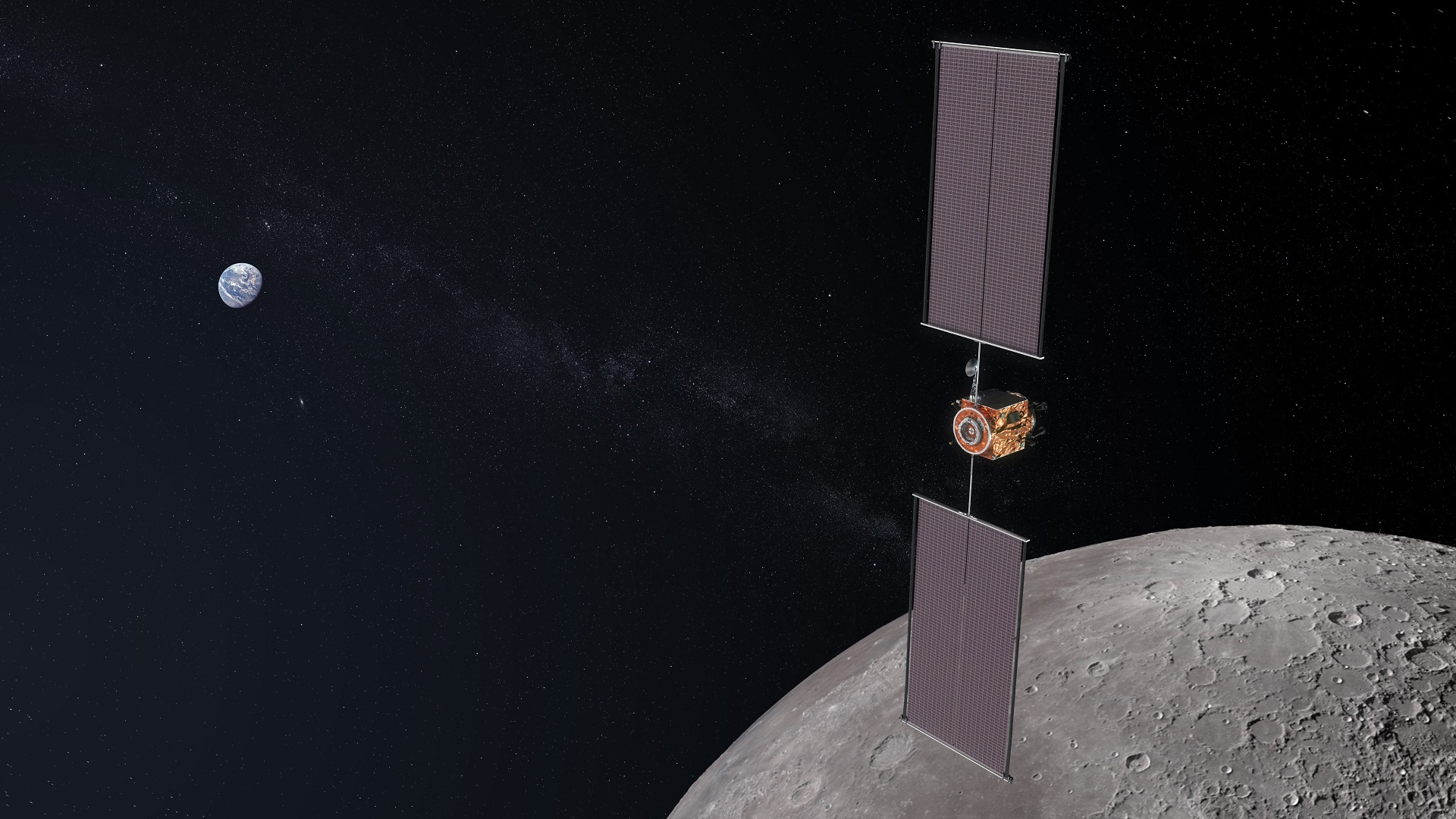 The Power and Propulsion Element of the Lunar Gateway. (Credit: NASA/Maxar)

The PPE is a high, 60-kilowatt solar electric propulsion spacecraft that will provide power, high-rate communications, attitude control, and orbital transfer capabilities for the Gateway.  Managed out of NASA’s Glenn Research Center in Ohio, it is being developed and built by Maxar Technologies.

The HALO module will be the living quarters for astronauts visiting the Gateway.  Its primary purpose will be to provide basic life support and environmental control as well as command, control, and data handling capabilities.

HALO will also have several docking ports for visiting vehicles and future modules, as well as space for science and stowage.

The Hab module is being developed and built by Northrop Grumman and is managed by NASA’s Johnson Space Center.

The PPE and HALO module are expected to launch no earlier than 2023.  No launch vehicle has been formally selected, but NASA has stated that SpaceX’s Falcon Heavy with an extended fairing is more than capable of launching the components.

The launch provider will be declared at the end of 2020 after NASA competitively procures the launch.