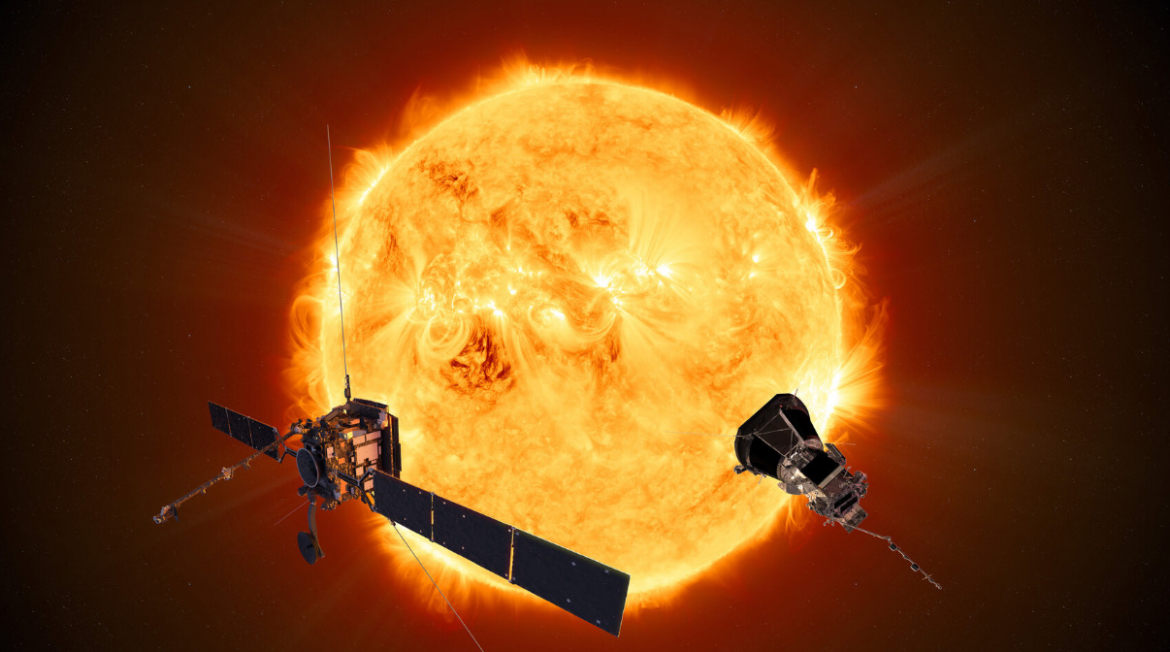 Two intrepid spacecraft are dancing with the Sun and making great progress toward the goal of learning more about our star. After NASA announced that Parker Solar Probe (PSP) had sent the “Status A” beacon after its fifth close flyby of the Sun, the European Space Agency (ESA) has announced that its Solar Orbiter has completed its first Perihelion.

PSP is the first spacecraft that can “touch the Sun” – specifically its atmosphere – and is the fastest human-made object.

After completing its fifth perihelion, which took place on June 7th, PSP sent the “Status A” beacon. This is the first message from the spacecraft after a five-day period where communications are not possible. The Status A beacon is the best of four possible status signals. It indicates that the Spacecraft is operating nominally and the instrument suites are collecting science. The mission operators at the Johns Hopkins Applied Physics Laboratory in Laurel, Maryland, received the beacon at 16:40 EDT on the 9th. 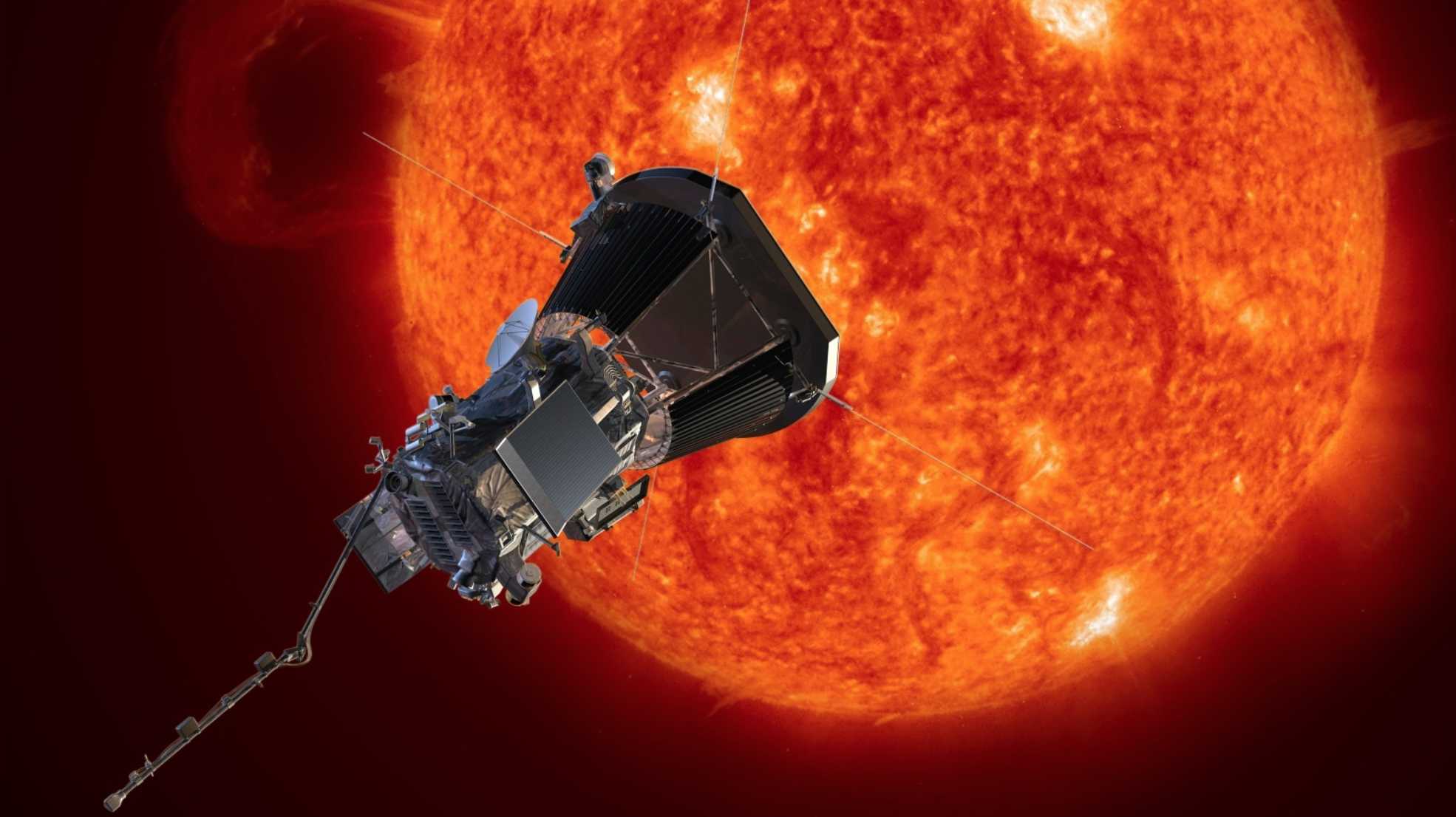 An artist’s depiction of the Parker Solar Probe as it dives toward the Sun for one of its close flybys into the corona. (Credit: NASA/APL)

On the fifth flyby, PSP matched its fourth flyby in terms of velocity and distance to the Sun – although it consisted of the longest observation campaign to date. The campaign started on May 9th, when PSP was at a distance of 62.5 million miles from the Sun’s surface. The campaign will last nearly two months and will end on June 28th.

This long campaign was spurred by PSP’s earlier observations, which revealed significant rotation of solar wind and solar wind phenomena occurring much farther from the Sun than previously thought. This earlier activation of science instruments allows the team member to cover a larger range of the solar wings to trave the evolution of the winds as it moves from the Sun.

“We have a real opportunity here to see what’s going on in these regions further from the Sun’s corona,” said Nour Raouafi, a Parker Solar Probe project scientist at the Johns Hopkins Applied Physics Laboratory. “While our primary goal is to understand the mysteries at the Sun’s corona and the ‘young’ solar wind closer to the Sun, there is evidence indicating very interesting physics to explore earlier in the orbit and link that to what occurs near the Sun. We have the capability to gather this data and see what it yields.”

The solar encounter will end on June 13th, after which PSP will begin traveling towards Venus for its third flyby of the planet. At its closest, the probe will fly only 516 miles above Venus’ surface. This will be the first flyby of Venus where PSP is heading away from the Sun, rather than towards it. The probe will witness a brief 11-minute solar eclipse, during which the four instrument suites will be active and collecting data. The encounter will use Venus to shed some of the probe’s orbital speed – allowing it to get much closer to the Sun on the sixth flyby.

The data from this observation campaign will be sent back to Earth between late June and mid-August 2020 and will be published in November 2020.

PSP launched on a United Launch Alliance Delta IV Heavy rocket with a Star-48BV upper stage on August 12th, 2018 at 03:31 am ET. Named after the living Eugene Parker – the first person to theorize Solar Winds – PSP is the culmination of 30 years of testing, studies, and development of new technologies. 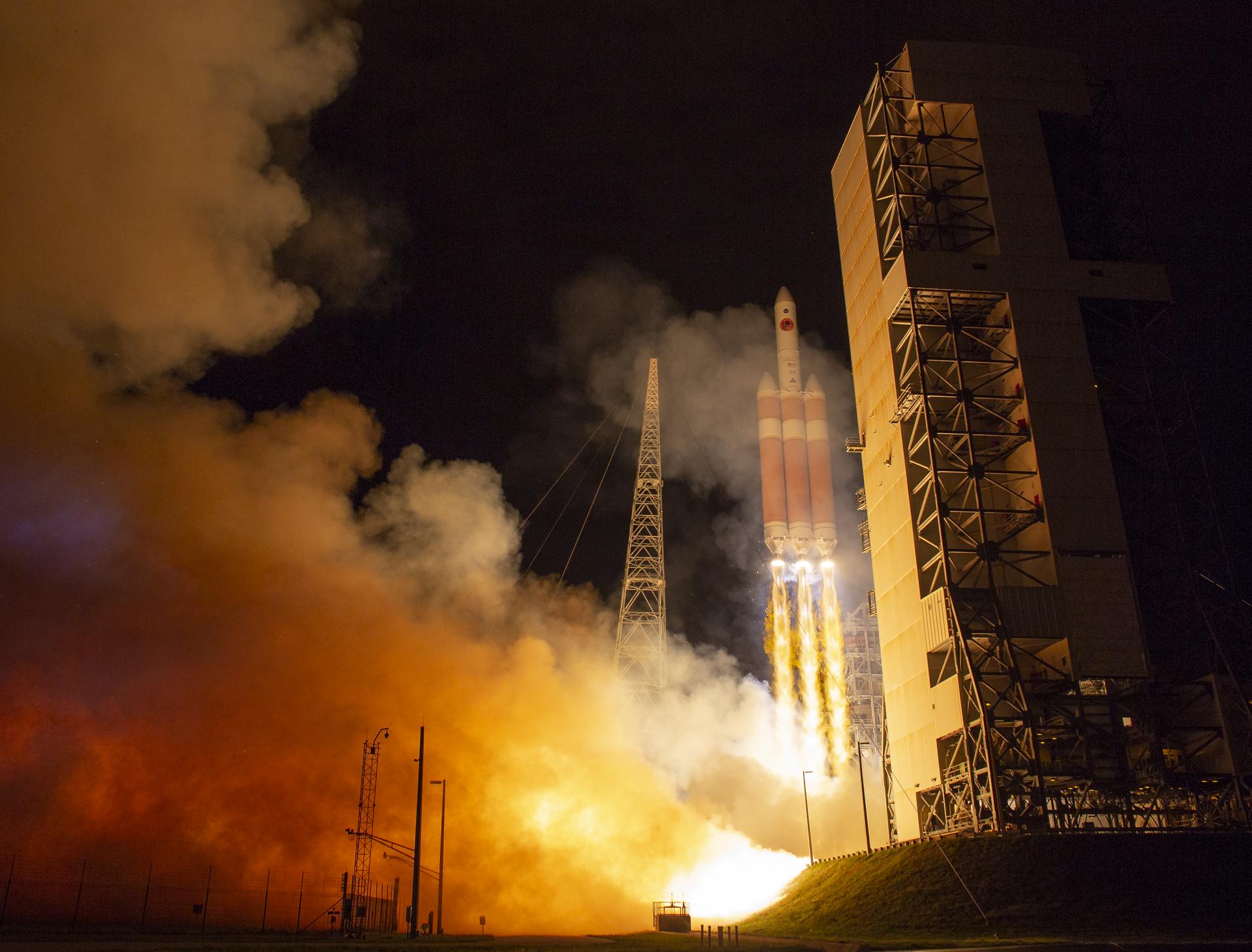 The probe is a relatively small spacecraft with a max weight of 685 kg, and a main spacecraft bus only 1 meter in diameter and 3 meters in height. Parker was built by the Applied Physics Laboratory (APL). Notably, PSP includes a 2.3 m diameter, 11.43 cm-thick carbon-composite heat shield that can withstand heat up to 1,377 degrees Celsius. This is to protect the spacecraft from the intense heat once it reaches its closest distance to the Sun –  3.83 million miles (6.16 million kilometers).

PSP has four major instruments that it uses during each flyby of the Sun. The Fields Experiment (FIELDS) instrument makes direct measurements of electric and magnetic fields and waves, Poynting flux, absolute plasma density and electron temperature, spacecraft floating potential and density fluctuations, and radio emissions.

The Integrated Science Investigation of the Sun (IS☉IS) instrument makes observations of energetic electrons, protons, and heavy ions that are brought to high energies in the Sun’s atmosphere and inner heliosphere, and correlates them with Solar wind and coronal structures.

Finally, the Solar Wind Electrons Alphas and Protons (SWEAP) counts the most abundant particles in the solar wind and will measure some of their properties such as velocity, density, and temperature. 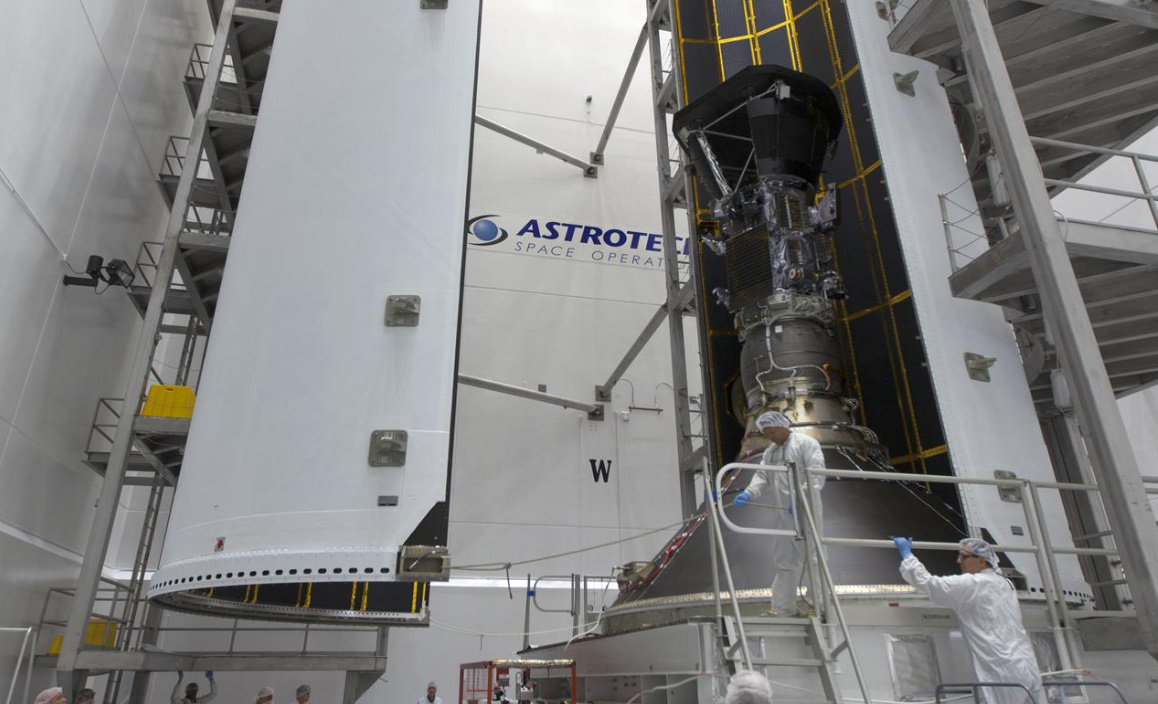 Since its launch, Parker has completed five close approaches to the Sun and two Venus flybys. Because of the gravity assists during the Venus flybys, PSP has become the fastest human-made object. The last spacecraft to hold that title was Helios-B, setting a record of 70 km/s (160,000 mph). Currently, Parker has achieved a top speed of 109km/s (244,255 mph), which is set during the fourth perihelion. Once PSP reaches its lowest perihelion of 6.9 million kilometers, it will reach a speed of 192 km/s (430,000 mph).

With PSP, NASA can study the Sun in ways never done before. Also, with the European Solar Orbiter getting ready to be put into operation, the Sun can be studied in even further detail.

In addition to Parker, NASA and APL have several other missions currently flying. These include the New Horizons mission, STEREO-A, Advanced Composition Explorer (ACE), and the Van Allen Probes.

Soon, the Double Asteroid Redirection Test (DART) mission will launch in late July 2021 aboard a Falcon 9 rocket. DART will then impact the Moonlet of Didymos to study asteroid diversion via an impact. In 2026, the Dragonfly mission will launch, sending a large drone to explore Saturn’s moon Titan.

United Launch Alliance will soon launch the Perseverance rover – piggybacked by the Ingenuity helicopter – on their Atlas V rocket on July 20th, 2020. The next Delta IV Heavy launch will be NROL-44, currently scheduled for NET August 2020.

PSP’s milestone was soon followed by ESA announcing that the Solar Orbiter has completed its first Perihelion around the Sun.

On June 15, 2020, the Solar Orbiter completed the first Perihelion. At a distance of 77 million kilometers, about half the distance between the Sun and the Earth, this is the first test of the spacecraft systems – its ten instruments and six onboard telescopes.

The telescopes will get close-up images of the Sun in unison for the first time, the closest images ever taken. These early observations can prove that Solar Orbiter’s telescopes are ready for future observation. The images will be released in mid-July.

“We have never taken pictures of the Sun from a closer distance than this. There have been higher resolution close-ups, e.g. taken by the four-meter Daniel K. Inouye Solar Telescope in Hawaii earlier this year. But from Earth, with the atmosphere between the telescope and the Sun, you can only see a small part of the solar spectrum that you can see from space,” noted ESA’s Solar Orbiter Project Scientist Daniel Müller.

Today is @ESASolarOrbiter's first perihelion (i.e close pass of the Sun), the first of many as it gets even closer. It's about 77 million km from the Sun's surface, half the distance between Earth and the Sun 👉 https://t.co/tC5nWKTCnS #WeAreAllSolarOrbiters, just not as close pic.twitter.com/gEdWfZTr2G

Our ultraviolet imaging telescopes have the same spatial resolution as those of NASA’s Solar Dynamic Observatory (SDO), which takes high-resolution images of the Sun from an orbit close to Earth. Because we are currently at half the distance to the Sun, our images have twice SDO’s resolution during this perihelion,” Müller added.

“For the first time, we will be able to put together the images from all our telescopes and see how they take complementary data of the various parts of the Sun including the surface, the outer atmosphere, or corona, and the wider heliosphere around it.”

Scientists will analyze the data from the four in-situ instruments that measure the properties of the environment around the Spacecraft. It includes the magnetic field and the particles making up the solar wind.

“This is the first time that our in-situ instruments operate at such a close distance to the Sun, providing us with a unique insight into the structure and composition of the solar wind,” noted Yannis Zouganelis, ESA’s Solar Orbiter Deputy Project Scientist. “For the in-situ instruments, this is not just a test, we are expecting new and exciting results.”

Solar Orbiter launched on an Atlas V 411 from Space Launch Complex-41 (SLC-41) on February 10, 2020. It has gone into a commission phase, which was completed on June 15. It will commence its cruise phase which will last until November 2021. After it ends it will begin the main science phase which will get it as close as 42 million Kilometers from the Sun’s surface, which is closer than the planet Mercury.

Solar Orbiter will reach its second Perihelion in early 2021. During the Main Science Phase, it will have a Perihelion of 48 million kilometers in early 2022.

In order to get to the orbit and inclination that the Science Phase needs it will need to do multiple Venus flybys. This orbit will allow Solar Orbiter to have a good look at the Sun’s poles. Studying the poles can help scientists have a better understanding of the behavior of the Sun’s magnetic field, which drives the creation of solar wind that in turn affects the environments of the Solar Systems.

The Solar Orbiter is currently 134 million kilometers from Earth, it will take about a week for the images from the perihelion to be downloaded via the ESA’s 35-m deep-space antenna in Malargüe, Argentina. The science teams will then process the images before releasing them to the public. The data from the in-situ instruments will become public later this year after calibrations for the individual sensors.

“We have a nine-hour download window every day but we are already very far from Earth so the data rate is much lower than it was in the early weeks of the mission when we were still very close to Earth,” added Müller. “In the later phases of the mission, it will occasionally take up to several months to download all the data because Solar Orbiter really is a deep space mission. Unlike near-Earth missions, we can store a lot of data on-board and downlink it when we are closer to home again and the data connection is much better.”

Solar Orbiter is not the only spacecraft that will get close to the Sun that the ESA operates. BepiColombo, which recently concluded a flyby of the earth, will reach Mercury on December 5, 2025.

Solar Orbiter will continue the legacy of the continued observations. With PSP both will help understand the Sun and provide images to areas of our Star never seen before.