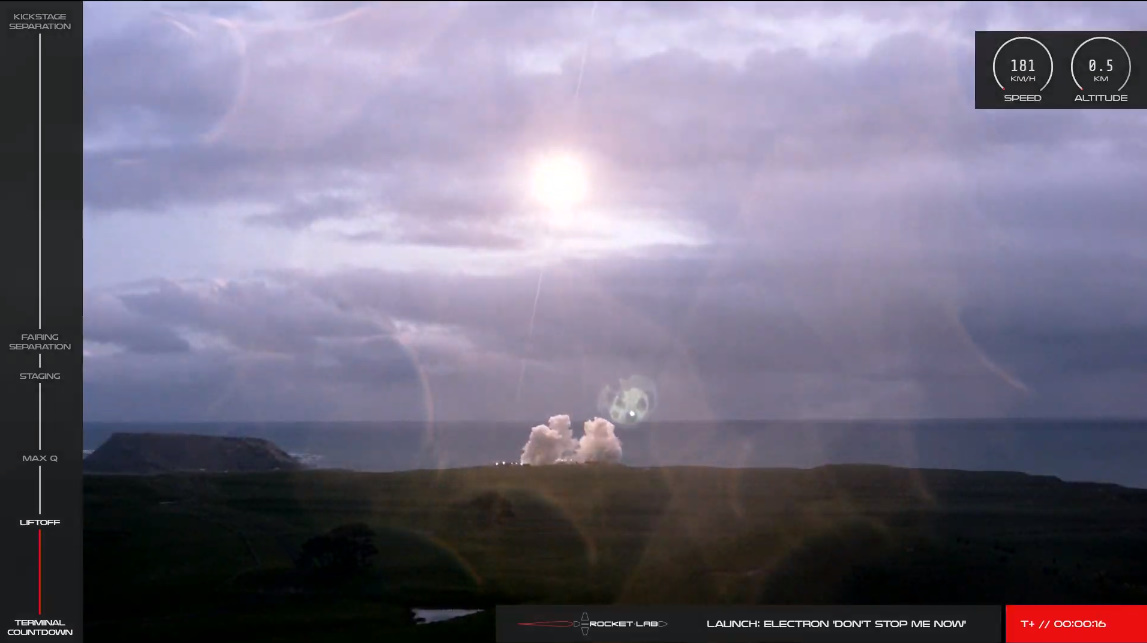 After a several week stand-down due to the global coronavirus pandemic, Rocket Lab launched its 12th Electron mission to date—a rideshare mission with payloads from NASA, the NRO, and the University of New South Wales. Following a weather scrub earlier in the week, the mission launched from Rocket Lab’s Complex 1 on the Mahia Peninsula in New Zealand on Saturday (local time – 05:12 UTC).

This mission is named “Don’t Stop Me Now,” according to Rocket Lab, “in recognition of Rocket Lab board member and avid Queen fan Scott Smith, who recently passed away.”

Once in orbit, Electron will deploy five payloads: ANDESITE, the M2 Pathfinder, and three satellites belonging to the U.S. National Reconnaissance Office.

ANDESITE (which stands for Ad-Hoc Network Demonstration for Extended Satellite-Based Inquiry and Other Team Endeavors) was developed by Boston University.

The satellite itself will deploy eight “pico-satellites” designed to resolve current densities at varying spatial resolutions in the near-Earth magnetosphere using measurements from Anisotropic Resistance Magnetometers, and relay information back to the central satellite. It is flying as part of NASA’s Educational Launch of Nanosatellites, or ELaNa program.

M2 Pathfinder is a collaboration between the University of New South Wales and the Australian Government. The mission will test communications architecture and other technologies, including the ability of an onboard software-based radio to operate and reconfigure while in orbit.

On May 7, Rocket Lab successfully conducted a wet dress rehearsal ahead of launch. During this process, the rocket is filled with fuel, simulating a normal countdown right up until engine ignition.

That's a perfect wet dress rehearsal done and dusted for our 12th Electron mission! We're excited to be back on the pad and launching soon for @NatReconOfc, @NASA, and UNSW Canberra Space. Stay tuned for launch window dates soon! pic.twitter.com/o8oM4fe5jO

The countdown began at T-6 hours when the road to the launch complex was closed. During the next few hours, Electron was loaded with rocket-grade kerosene (RP-1), and liquid oxygen. At T-2 hours, marine zones around the launch complex were closed, and the airspace surrounding the area was also restricted at T-30 minutes.

At T-18 minutes, the Launch Director conducted a go/no go poll of all launch operators in order to continue the countdown. Passing 2 minutes before launch, the team handed off control of the countdown to Electron’s onboard computers.

At T-2 seconds, the nine Rutherford engines on Electron’s first stage ignited and reached full thrust, a process that occurs almost instantly due to their electric-driven turbopumps.

Electron lifted off and began pitching downrange. After 2 minutes and 36 seconds of powered flight, the Rutherford engines on the first stage shutdown. Shortly after, the first and second stages separated, followed by ignition of the upper stage Rutherford engine. Fairing separation occurred 3 minutes and 12 seconds into flight.

Electron reached its initial parking orbit, at T+8:52, and the second stage shut off. 10 seconds later, the kick stage separated.

At T+51:34, the Curie engine on the kick stage ignited, followed by shutdown at 1 minute and 36 seconds later.

Finally, at around one hour after liftoff, all payloads were deployed from the kick stage, ending the mission.

During the previous Electron mission, the first stage experienced another successful reentry test. The rocket survived re-entry, or what Rocket Lab calls “the wall,” and successfully followed a nominal trajectory including a controlled roll for stability. Following this outcome, Rocket Lab began low altitude drop tests in mid-February in order to begin testing prototype parachutes, the last part of the system required for recovery of an Electron first stage.

For the time being, however, Rocket Lab is putting a pause on controlled reentry tests. The first stage for “Don’t Stop Me Now” is not equipped with any recovery hardware. According to CEO Peter Beck, the company is aiming for a full recovery on Electron’s 17th flight.

Rocket Lab opened their second launch pad, LC-2, in December 2019, and the Electron rocket assigned to the first mission from this launch site has arrived. The rocket was raised vertical on the pad, and multiple tests have been performed, including a “hot ignition test” of the first stage’s nine Rutherford engines. This mission is slated to launch sometime in quarter 3 of this year.

The payload of the next Electron mission from LC-1 is currently unknown, but Rocket Lab recently conducted a hot-fire test of the second stage for that mission.

Flight 12 is on the pad at LC-1 in NZ, another Electron is at the pad at LC-2 in Virginia, and the team just hot fired flight 13's 2nd stage. Busy times! #OpeningAccessToSpace pic.twitter.com/WAhlmBEG1y

After that, also from LC-1, the company will fly a dedicated mission for a synthetic aperture radar satellite built by Capella Space scheduled for sometime this summer.

The company is aiming for 12 launches this year, doubling its record of 6 from 2019.

Solid Rocket Boosters arrive at Kennedy for Artemis 1 and OmegA