Solid Rocket Boosters arrive at Kennedy for Artemis 1 and OmegA 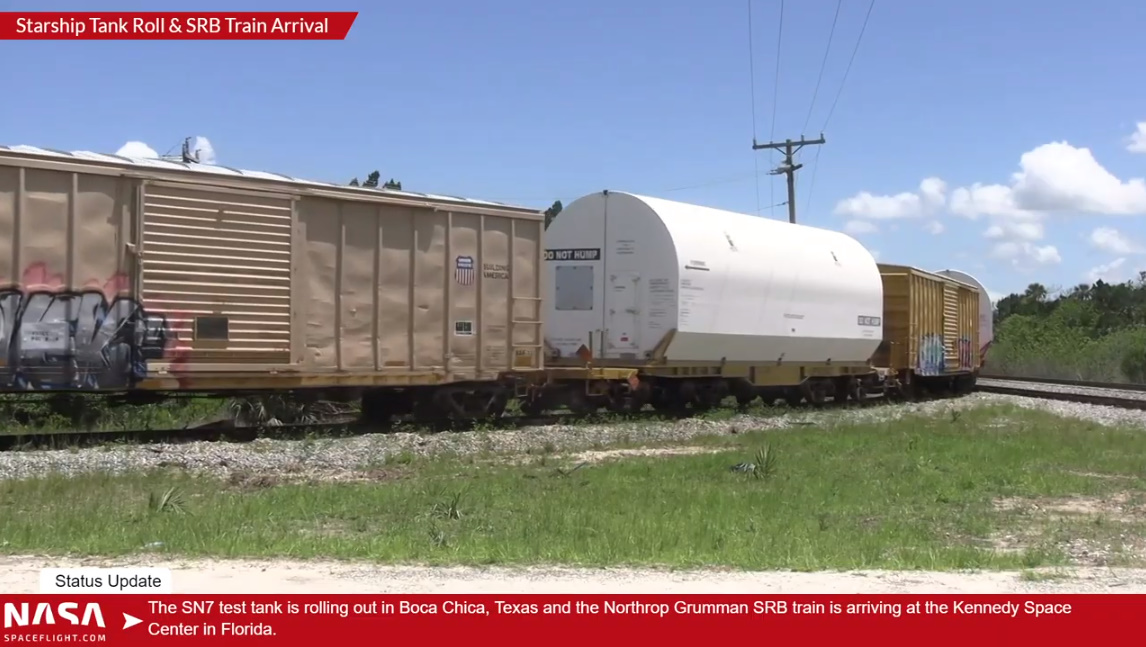 For the first time in ten years, Solid Rocket Booster segments have arrived at the Kennedy Space Center in Florida for flight operations.

Successfully completing the cross-country train trip were all 10 propellant segments for the Artemis 1 mission of the SLS rocket as well as inert Castor-series segments for the company’s upcoming OmegA rocket, both of which are scheduled to debut in 2021 with flights off of Pad 39B at the Kennedy Space Center.

The arrival marks the second major flight component for the Artemis 1 mission to arrive for stacking operations at the Kennedy Space Center following the Interim Cryogenic Propulsion Stage, which was delivered more than two years ago.

More so, it marks the first time since 27 May 2010 that Solid Rocket Booster segments arrive at the Florida Space Center.

Yet another connection to that previous human flight era, one of the Solid Rocket Booster propellant segments for the Artemis 1 flight flew on the STS-135 flight of Atlantis 10 years ago.

Of note, it is not the first time, however, Northrop Grumman has delivered solid rocket motors to Florida since the end of Shuttle as the organization is responsible for all of the solid rockets that have flown on the Delta IV Medium missions, the Orion Ascent Abort flight, and Minotaur IV missions.

Northrop Grumman will also, later this year, begin providing the solid rocket motors for the Atlas V as it moves away from the AJ-60As from Aerojet Rocketdyne to the GEM-63 boosters from Northrop Grumman. 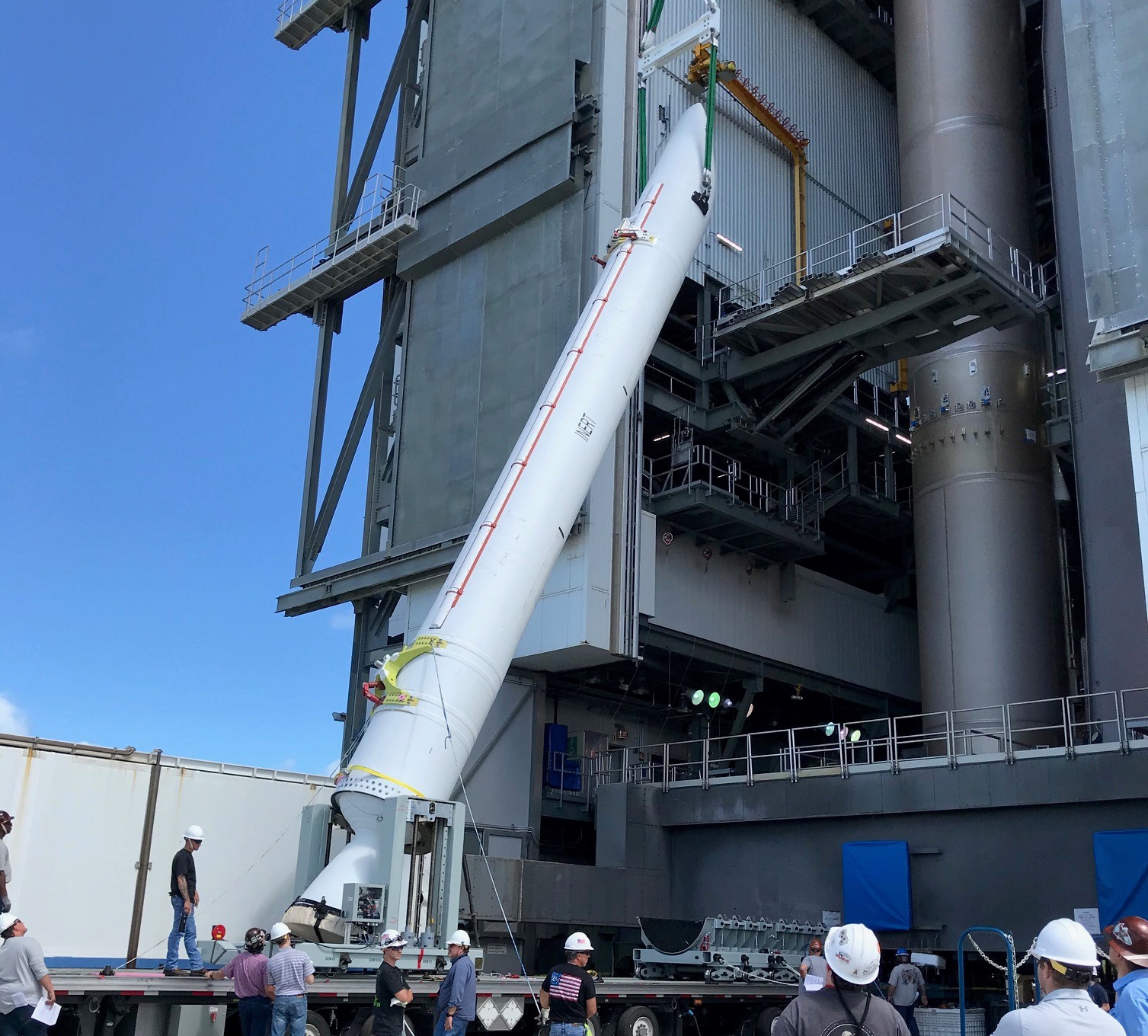 The pending switch to GEM-63 boosters has been a multi-year effort, with ULA and Northrop Grumman teams completing three days of booster mating and ground handling tests at the SLC-41 Atlas V launch pad in June 2019.

ULA has not publicly said on which mission this year the switch to the new boosters will occur, though only two options currently remain: the Atlas V 531 mission with three solid rockets that will launch a classified National Reconnaissance Office payload, or the Atlas V 511 (debut configuration) dual passenger mission for the U.S. Space Force.

The Perseverance Mars rover launch in July as well as upcoming Starliner missions will use the AJ-60A solids.

The switch to the GEM-63s for the Atlas V will make Northrop Grumman the almost exclusive provider of solid rocket motor technology to the U.S. rocket fleet.

What’s more, the arrival of Solid Rocket Booster segments for the Artemis 1 flight and inert Castor-series segments for OmegA handling and stacking validation marks the first time two different solid rocket motor series for two different rockets have been delivered by train at the same time.

After arriving at Jay Jay rail yard in Titusville, the train cars with the solid rocket segments were handed off from the Florida East Coast railroad to the Kennedy Space Center and then brought over a railroad drawbridge north of the Space Center out toward Playalinda Beach before making the southward turn toward the Vehicle Assembly Building and Complex 39 area.

Built for the Shuttle program, the Rotation Processing and Surge Facility is where Solid Rocket Booster segments undergo final preparations for stacking, including integration of the aft skirt to the lower segments, receiving and pre-stacking inspections, and then transfer to their transportation platforms.

For Artemis 1, the Solid Rocket Boosters will be the first element of the stack to take shape on the Mobile Launcher — with all 10 propellant segments being stacked before the nose cones, which contain, among other things, part of the booster separation system, are added as the final element.

Once the Solid Rockets are fully stacked, the Core Stage can then be brought over for mating operations before the Interim Cryogenic Propulsion Stage and the Orion spacecraft and its European service module are placed on top.

Currently, the Artemis 1 stacking schedule is somewhat unknown, with COVID-19 processing delays on the Artemis 1 Core Stage at the Stennis Space Center not yet fully understood in terms of their impact on the launch schedule.

What is becoming clear is that OmegA will likely beat the Artemis 1 SLS rocket to the launch pad for its inaugural mission.  According to Northrop Grumman, OmegA is on track for a spring 2021 maiden flight from pad 39B, placing it several months, at least, ahead of the Artemis 1 schedule at present. 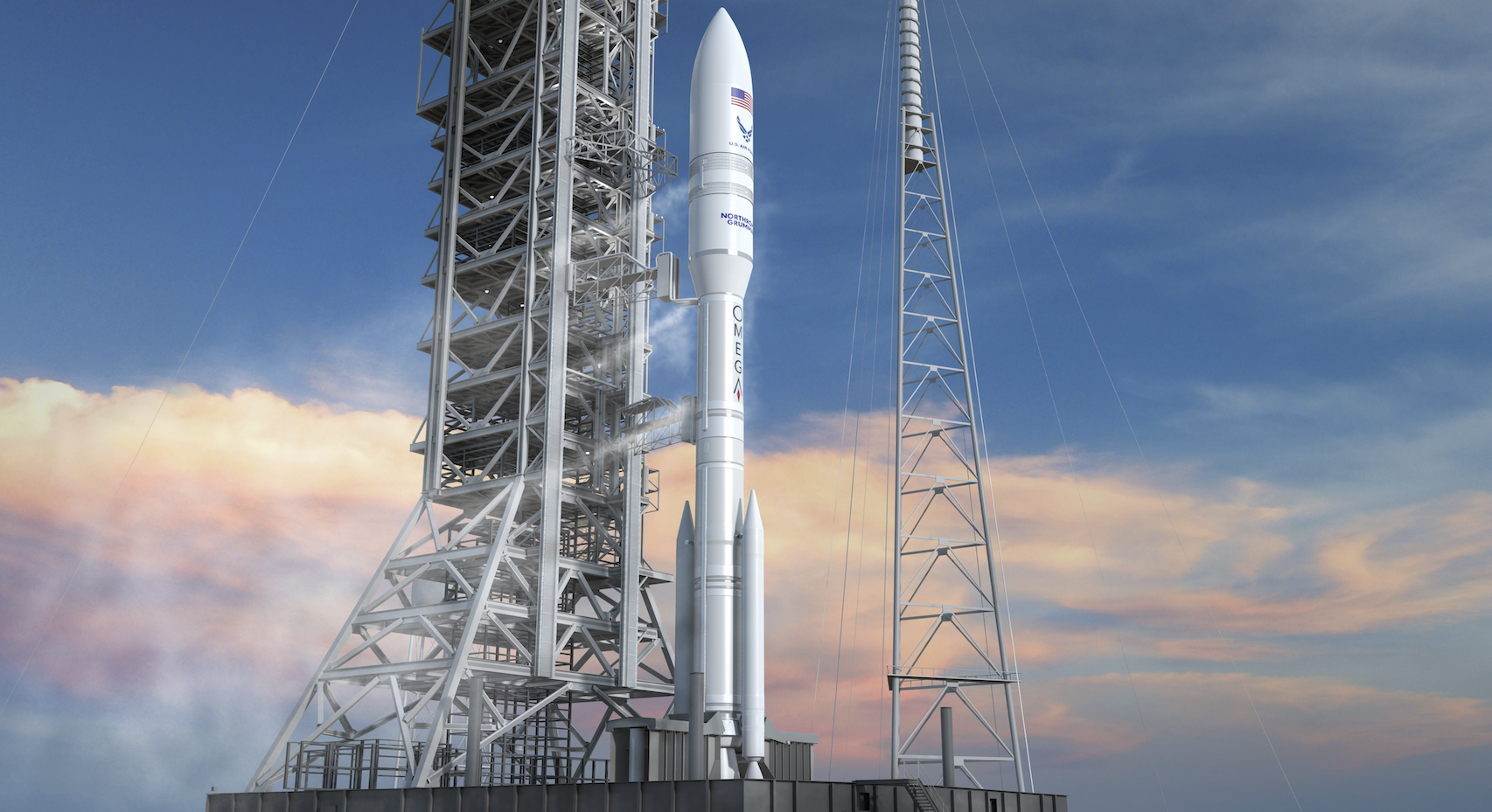 OmegA, on LC-39B, stands moments from liftoff on a mission for the U.S. Space Force. (Credit: Northrop Grumman)

OmegA launching before SLS and Artemis 1 marks a distinct change in NASA operations, as the U.S. space agency had previously refused to allow any rocket to launch off 39B before SLS made its maiden voyage.

In fact, Northrop Grumman was the only agency that took NASA up on its offer to share pad 39B.

However, repeated delays to the SLS program and the Artemis 1 mission have resulted in NASA abandoning the demand that SLS and Artemis 1 be the first launch off 39B since the pad ended its duties for the Shuttle and Constellation Programs in 2009.

Northrop Grumman confirmed to NASASpaceflight in an interview earlier this year that there were no issues in launching OmegA prior to the first SLS flight.

To this end, OmegA continues to march toward a debut flight in spring 2021, and the inert Castor-series solid rocket segments for OmegA that arrived today will go a long way toward validating ground handling and stacking operations for the rocket’s first (Castor-600) and second (Castor-300) stage boosters.

Meanwhile, after arriving at the Rotation Processing and Surge Facility, the Solid Rocket Booster segments for SLS will be offloaded and undergo receiving inspections and final preparations for flight and stacking operations.

The OmegA Castor-series booster segments will also be offloaded into the Rotation Processing and Surge Facility where Northrop Grumman employees and contractors will walk through the full series of steps to receive those segments, get them ready for stacking, and transfer them to the Vehicle Assembly Building.

Once in the VAB, the Castor-series inert booster segments will be attached to the overhead crane that services High Bays 1 and 2.  They will then be hoisted over the transom into High Bay 2 and stacked onto the modified Mobile Launcher.

The exact timing of these practice stacking operations is not currently known as the Mobile Launcher is still being refurbished and rebuilt from its Shuttle-era configuration into that needed for OmegA.

Northrop Grumman expects to have the Mobile Launcher in the VAB later this year to support those operations as well as stacking of the first OmegA flight vehicle in early 2021.

An overall goal of the OmegA program is to have the Castor-series solid rocket segments arrive at the Kennedy Space Center 30 days before the planned launch, greatly reducing the amount of storage and processing time required at the Florida Spaceport.