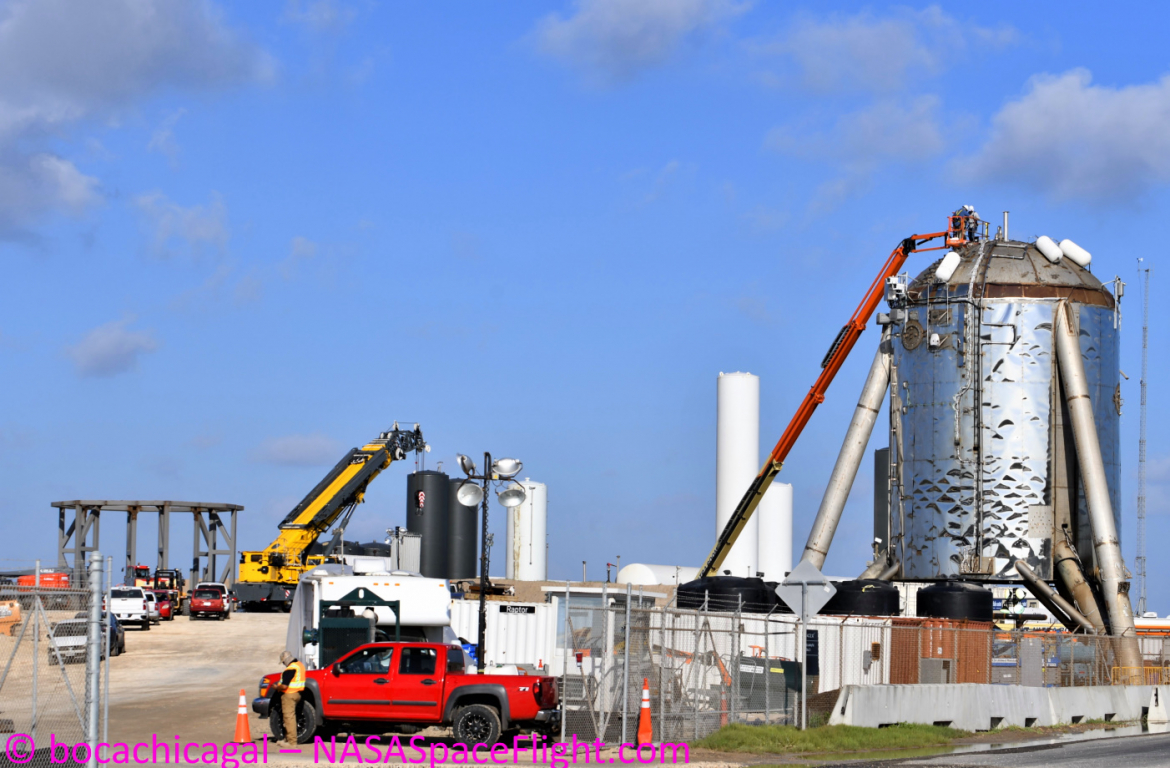 Following the May 29 explosive failure of the Starship SN4 prototype during a Static Fire test, SpaceX workers have been quickly making repairs to its Boca Chica, Texas launch facility. Starship SN5 is expected to roll to the launch site in the coming days in preparation for testing to begin on June 10.

The anomaly totaled the existing test stand used to hold down the vehicle during the testing milestones. On June 3, a replacement launch stand was installed at the launch site. SpaceX had already been working on a new launch stand before the May 29 accident – a factor that accelerated the recovery process.

The new stand appears to be similar in design to the original Starship launch mount. 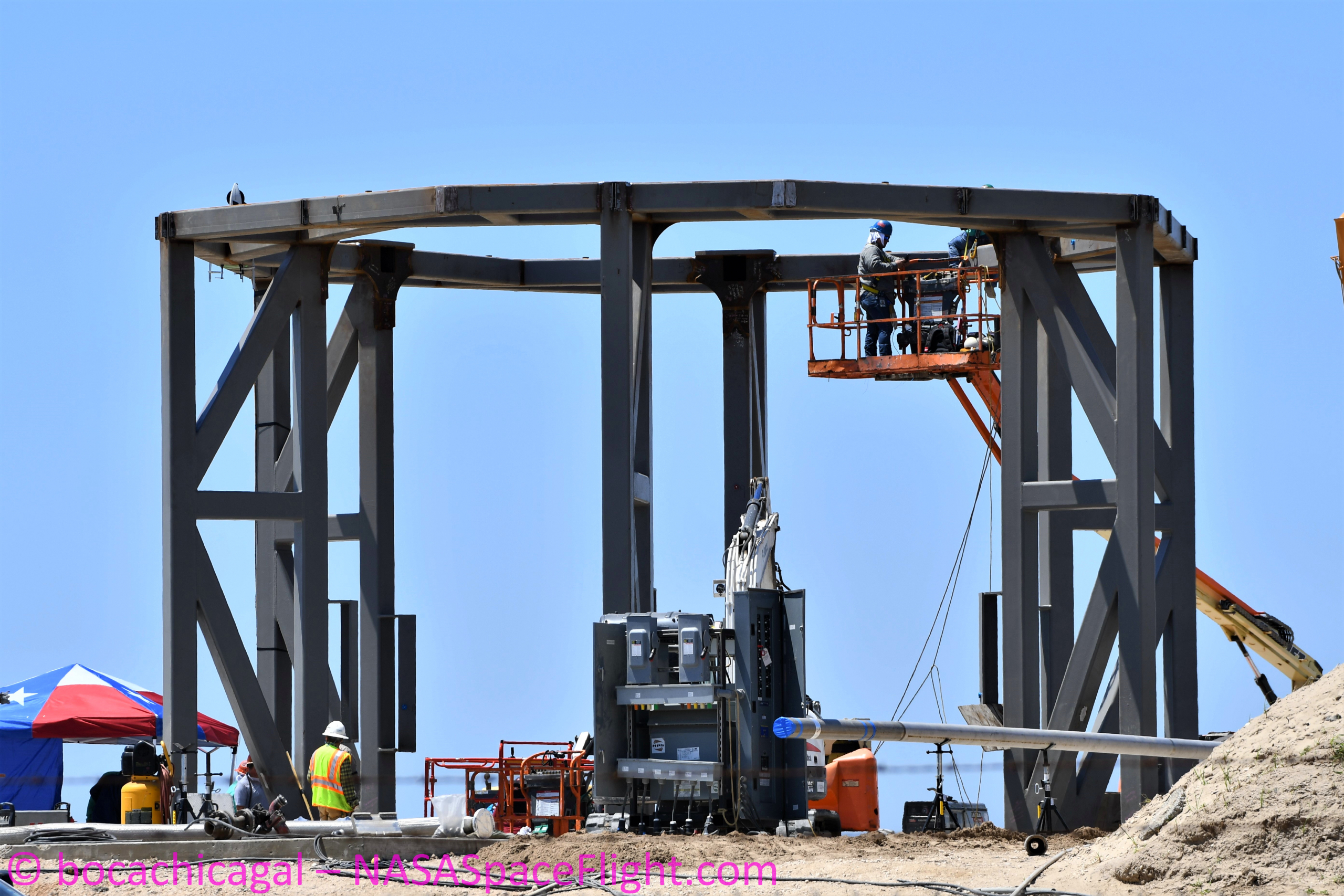 The new Starship test stand via BocaChicaGal for NSF

In the coming days, teams will continue to repair Ground Support Equipment (GSE) at the launch site. There was significant damage to GSE infrastructure due to the anomaly, but SpaceX will have the GSE repaired in time for testing to resume on June 10, per the latest notice of road closures.

While the Starship SN4 anomaly was dramatic, the required corrective action is not expected to be too complicated. Early indications were that an issue with the umbilical connections to the vehicle leaked significant quantities of propellant near the base of the vehicle.

It is understood that one of the test objectives of the May 29 static fire was to test disconnecting the umbilicals ahead of a planned 150-meter test flight scheduled for the following week. The umbilicals must be able to quickly detach when the launch vehicle leaves the pad.

During the testing of the quick disconnects, the system malfunctioned – spilling large amounts of propellant. This could be seen during NASASpaceflight’s live stream of the test.

The propellant eventually ignited, leading to a large explosion. It is not entirely clear what the ignition source was, but a still frame from the NASASpaceflight broadcast shows that the ignition occurred near the base of the vehicle. 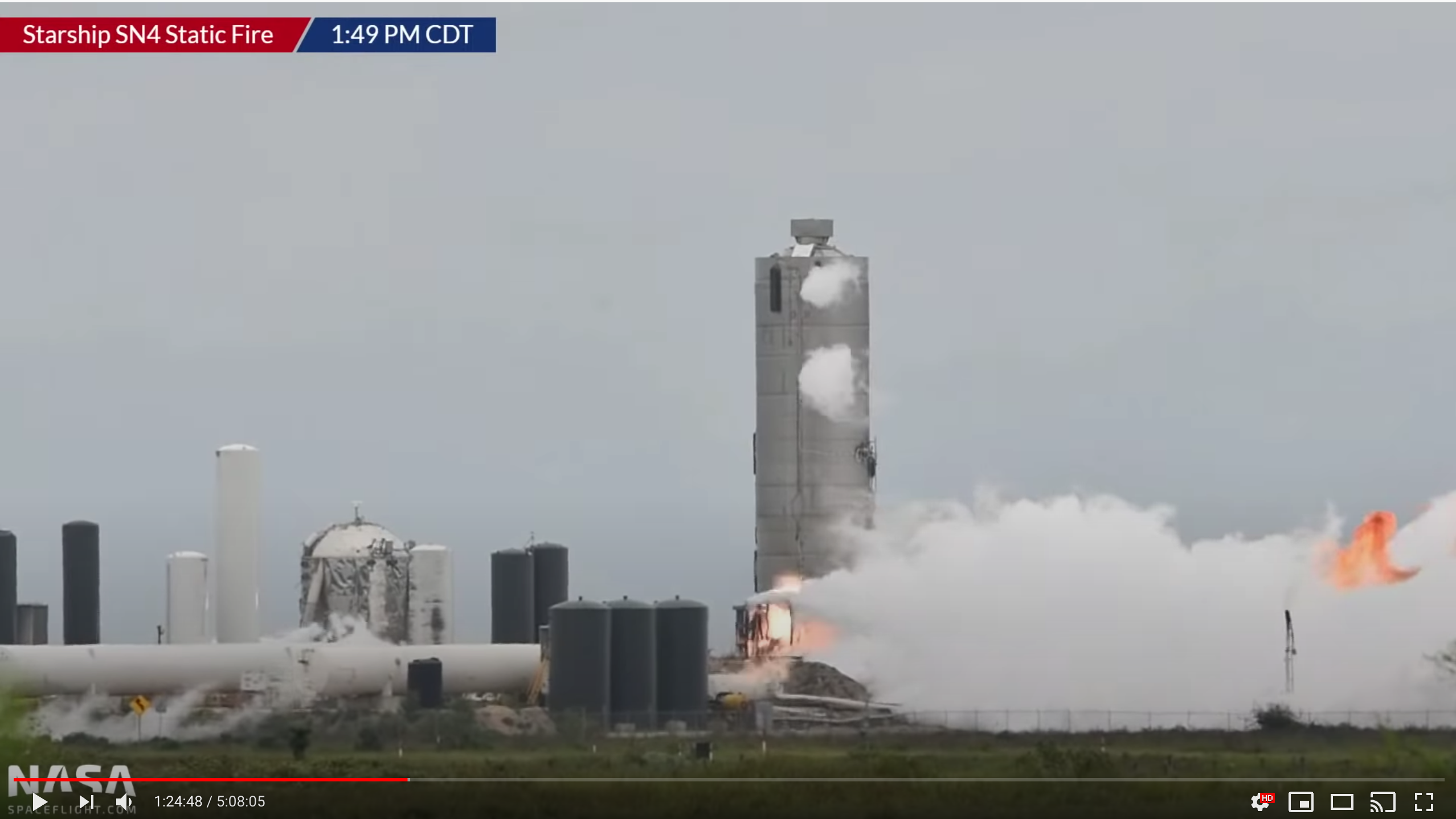 Notably, the structural integrity of Starship is not believed to be the cause of the accident. SpaceX has had issues with the prototypes collapsing under high pressure in the past. All of the previous full-scale prototypes failed cryogenic pressurization testing.

Including the May 29 test, SpaceX completed five static fires with Starship SN4. No previous Starship had even gotten far enough to have an engine installed. The Raptor engines performed well throughout testing, and the vehicle’s primary structure held strong.

If structural issues had been the cause of the recent anomaly, the flight-worthiness of SpaceX’s upcoming prototypes might have been invalidated. Starship SN5 is scheduled to roll to the launch pad on Monday, Starship SN6 is undergoing final assembly, and a Starship SN7 bulkhead has already been spotted.

It is unlikely that the quick disconnect issue will require significant changes to these vehicles – avoiding a prolonged setback for SpaceX. 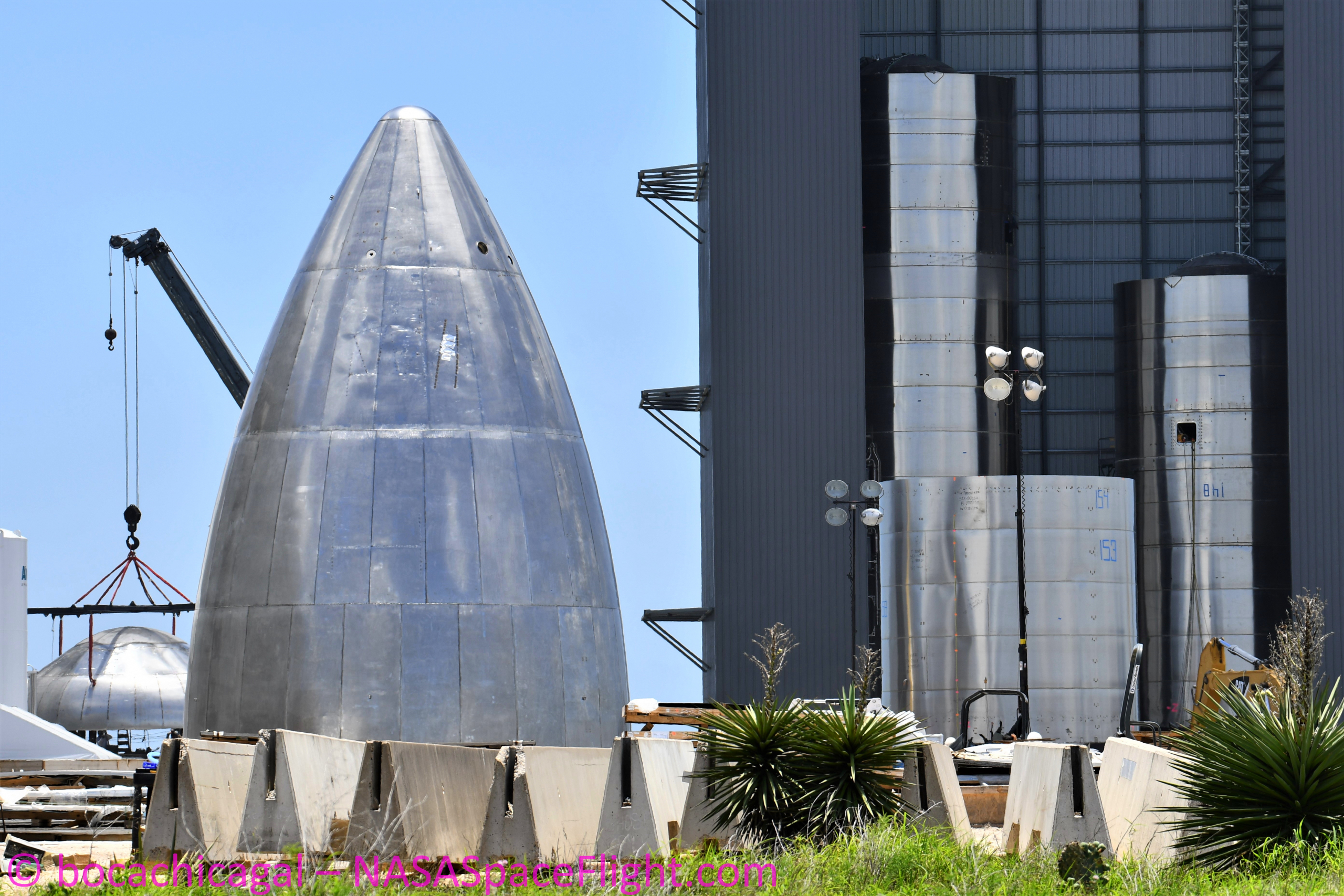 The lack of a significant design flaw with the vehicle will mean that the largest delay with SpaceX’s Starship testing flow will be the time required to repair the pad. The exact length of this process is not currently known, but Starship SN5 is expected to roll to the test stand within a few days.

Starship SN5 is now expected to be the first Starship to fly. Most likely, it will attempt the 150-meter hop test originally planned to occur with Starship SN4.

However, SpaceX had also been planning to install three Raptor engines and a nosecone on Starship SN5 as opposed to the single-engine and no nosecone on SN4. It remains to be seen if SpaceX will proceed with these plans in the wake of the SN4 anomaly, or if Starship SN5 will end up looking similar to SN4.

Whatever the case, Starship SN5 is currently scheduled to undergo proof testing starting as early as June 10, with a static fire following later next week. SpaceX will likely conduct a few static fires before attempting a flight test.

Based on FCC filings, it is believed that SpaceX plans to conduct a 150-meter hop, followed by a three-kilometer hop, and then a 20-kilometer hop. Not all of these flight tests will be done with Starship SN5 – with the higher altitude tests likely slated for later Starship prototypes.

Additionally, future testing plans are constantly evolving based on the results of past testing, meaning that there is no guarantee that those specific flight tests will occur.

SpaceX recently received an FAA launch license to conduct suborbital test flights from Boca Chica. This was one of the key bureaucratic hurdles that SpaceX had to clear ahead of its first flight tests. Now, it is just up to SpaceX to have the vehicle and associated infrastructure ready to resume flight testing from Boca Chica.

The launch provider has not conducted a test flight from the facility since August 2019, when the smaller Starhopper prototype successfully hopped to 150 meters.

While this extended timeframe from Starhopper’s final flight to the first flight of a full-scale Starship prototype is certainly not what SpaceX had first intended, Musk has stated that “spooling up the whole Starship/Raptor production line is really what matters.”