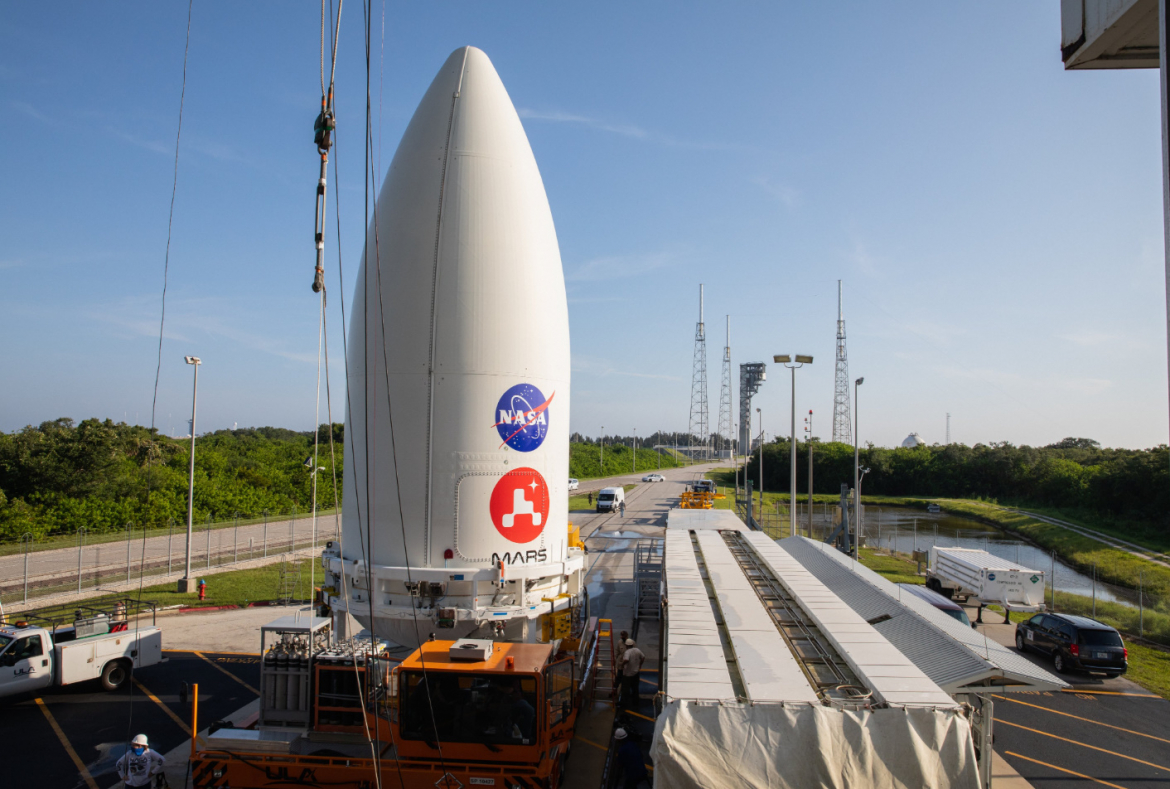 Launch of the Perseverance rover to Mars is nearly at hand, with United Launch Alliance entering into the final phase of pre-launch preparations for the payload and rocket.

But by far the most fascinating pre-launch element of this mission isn’t its processing flow but rather the ability for United Launch Alliance to “add” at least 10 days to the end of the overall launch period.

Processing of the Atlas V rocket for launch hasn’t gone as smoothly as teams would like, admitted Scott Messer, ULA Program Manager for NASA LSP missions.

“I’d say it’s been maybe a little rougher than I would have liked, but not uncharacteristic.  You know, almost every launch flow has some challenges that come up.  And this flow has not been any different than others in that regard.  We’ve dealt with a couple of different items that have obviously driven us to the 30th as opposed to the 17th originally.”

For one of those issues, the liquid oxygen sensor on the Centaur upper stage, Mr. Messer noted teams are still in their root cause evaluation and looking through every piece of data.

While a few potential corrective actions have been identified and are being considered, the bulk of the work still remains on firm identification of root cause.

“Every time we have an issue, we go through a pretty exhaustive activity to make sure we get to the root cause,” said Mr. Messer.  “[The team] will have a very extensive list of things that they’ll look through, probably about a hundred different possible options.”

Those corrective actions will not be identified and implemented in time for Perseverance’s launch, but are not expected to be an issue for the rest of the campaign. 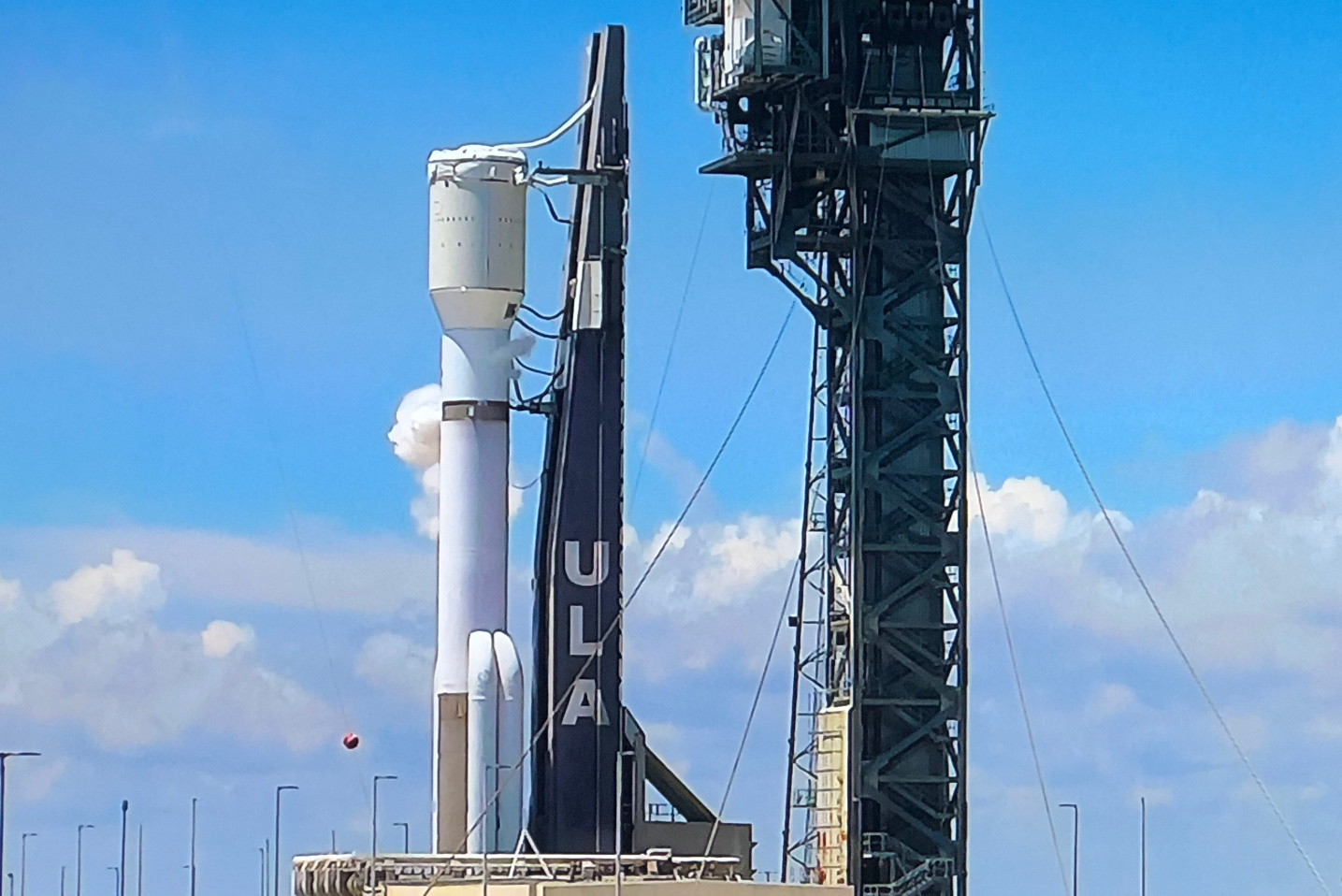 Moreover, the corrective actions are largely aimed not just at fixing the issue overall but at being able to identify such a sensor issue — should it recur — before getting the vehicle to the pad so that launch dates are not impacted.

In terms of what’s left in this processing flow, Mr. Messer noted the next major event is the installation of the MMRTG (Multi-Mission Radioisotope Thermoelectric Generator) nuclear power source onboard the Perseverance rover.

That event will take place inside the Vertical Integration Facility via payload fairing and aeroshell hatches that permit access to the rover by technicians while in the integration facility.

MMRTG installation will occur on Monday, 20 July before final vehicle closeouts commence on the 24th.

If the current plan holds, Atlas V will roll to its seaside launch pad at SLC-41 at the Cape Canaveral Air Force Station, Florida, on 28 July ahead of a planned 30 July launch to the Red Planet in a launch window that opens at 7:50 EDT (11:50 UTC).

Finding extra days in the window:

Most are familiar with launch windows.  There is a given chunk of time each day within a specific period of days or weeks during which a mission can launch — especially an interplanetary mission which has to launch in a brief period when Earth’s orbit aligns optimally with the target planet to permit an energy-efficient transfer.

We are most familiar with launch window constraints for flights to the International Space Station, which usually result in 10 minute, 5 minute, or instantaneous single-second launch windows on specific days based on the rocket being used.

In principle, the same is true with interplanetary missions — especially that last caveat of the overall launch period across weeks being defined — or bound — by the rocket chosen to launch the mission.

For Perseverance, that later part comes into play based on the capabilities of the Atlas V — some of which are unique to the vehicle.

Prior to fully entering the launch campaign this year, NASA said Perseverance’s launch period opened on 17 July and closed on 5 August.

Then, when ULA needed to move the launch to the 20th, NASA announced there were 10 extra days at the end of the window and that the total launch period to Mars for ULA now extended not to 5 August but to 15 August instead.

So how did ULA suddenly find 10 days that didn’t exist before in the launch period?

The answer: those days were always there… they were simply held back from the official window until all mass and engine performance elements of the flight were known concretely.

“When we begin an integration process, we make assumptions on what the vehicle weight is going to be.  So for example, you might have — and I’m just throwing out numbers — a Centaur upper stage with a predicted dry mass of 5,500 pounds,” said Ms. Patel.

At first, ULA also doesn’t know which Centaur is going to be used or what the thickness of the tanks on that Centaur is going to be (because there are variances allowed on each Centaur), so its exact mass cannot be known with precision until it is built.  Likewise, the precise efficiency of the RL-10 engine ULA selects for that single-engine Centaur is unknown at first.

Once all the hardware and the engine efficiency is known, ULA weighs the Centaur upper stage for some missions — like this one — to determine its precise mass.  Thereafter, ULA trajectory analysts go back and confirm the solidified performance of the vehicle against the entire window (including those days held back at first) and mission needs.

Those reviews usually show exactly what was thought beforehand, that the days held back from the original window are indeed good days to launch where all deliverables of the rocket meet the mission’s needs.

Only with this validation are the days at the end of the window officially added.

In this way, it can appear that extra days are found when in reality they aren’t.  They were always there as possibilities, but ULA and NASA wanted to withhold them pending final confirmation that they are in fact all viable days.

“This is fairly typical of interplanetary missions,” said Ms. Patel.  “In this instance, we had done some preliminary work to protect for the launch opportunity based on the capability of the launch vehicle as well as the energy states that [the Jet Propulsion Lab] needs to achieve to still make the mission.” 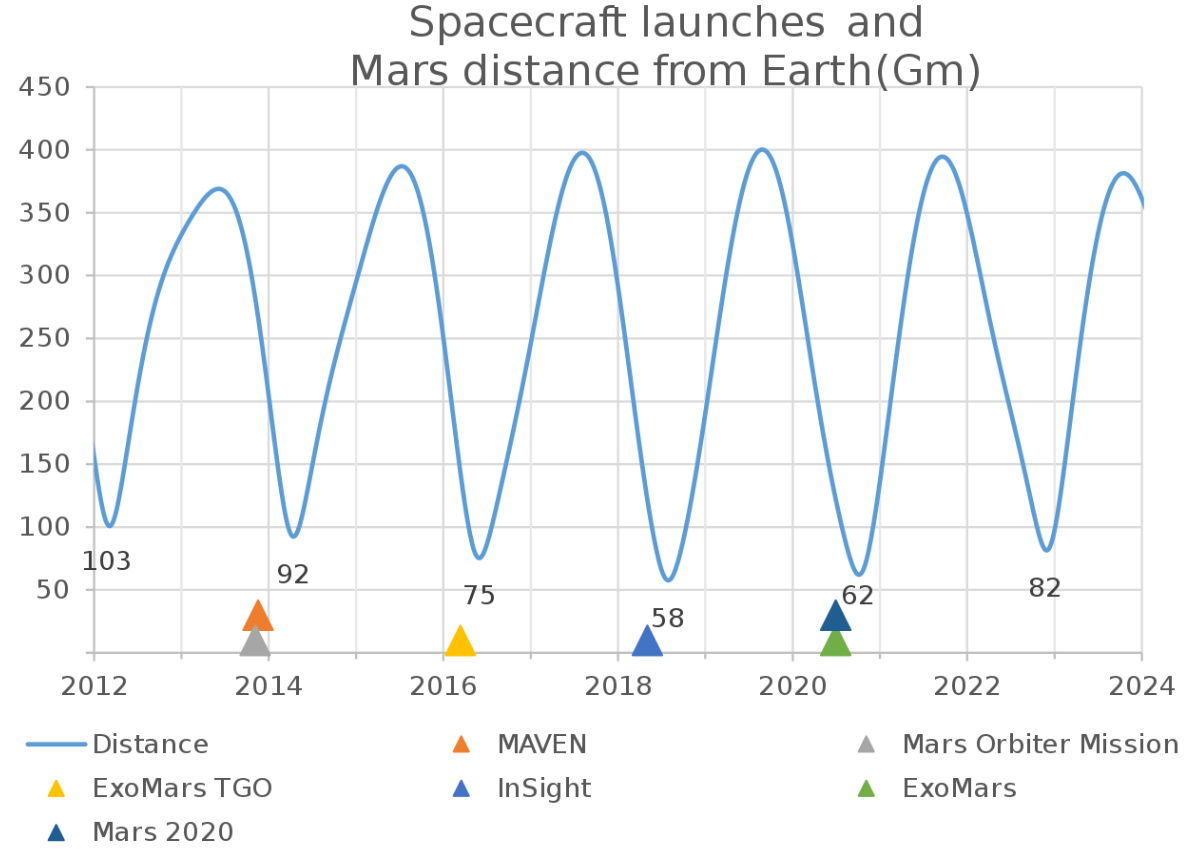 The cycles of Mars launch windows from Earth – via NASA JPL

Scott Messer added, “Every single planetary mission I’ve ever worked, and that’s quite a few over the years, we start with a shorter window, generally about 21 days, and then once we get on contract and begin the integration process with the spacecraft, we always have a little activity that goes to extend the window say 10 days.  Very similar to what we’ve done here.  So that’s pretty standard practice.”

Not only do the advantages given by Atlas V’s overall performance factor into the overall duration of the interplanetary launch period, but also to the discrete instantaneous windows that exist on each day of that overall period.

As with other interplanetary missions, the entire two-hour window each day will not be utilized by ULA.  Instead, single-second, discrete launch opportunities are created at each five minute interval in each day’s launch window.

And that comes down to the RAAN (Right Ascension of the Ascending Node) steering capability of the launch vehicle.

“For every mission, there’s an optimal time, but because of that RAAN steering capability, we can adjust the direction that we’re doing that second burn, and that allows us to increase that launch window duration on a given day,” said Ms. Patel. 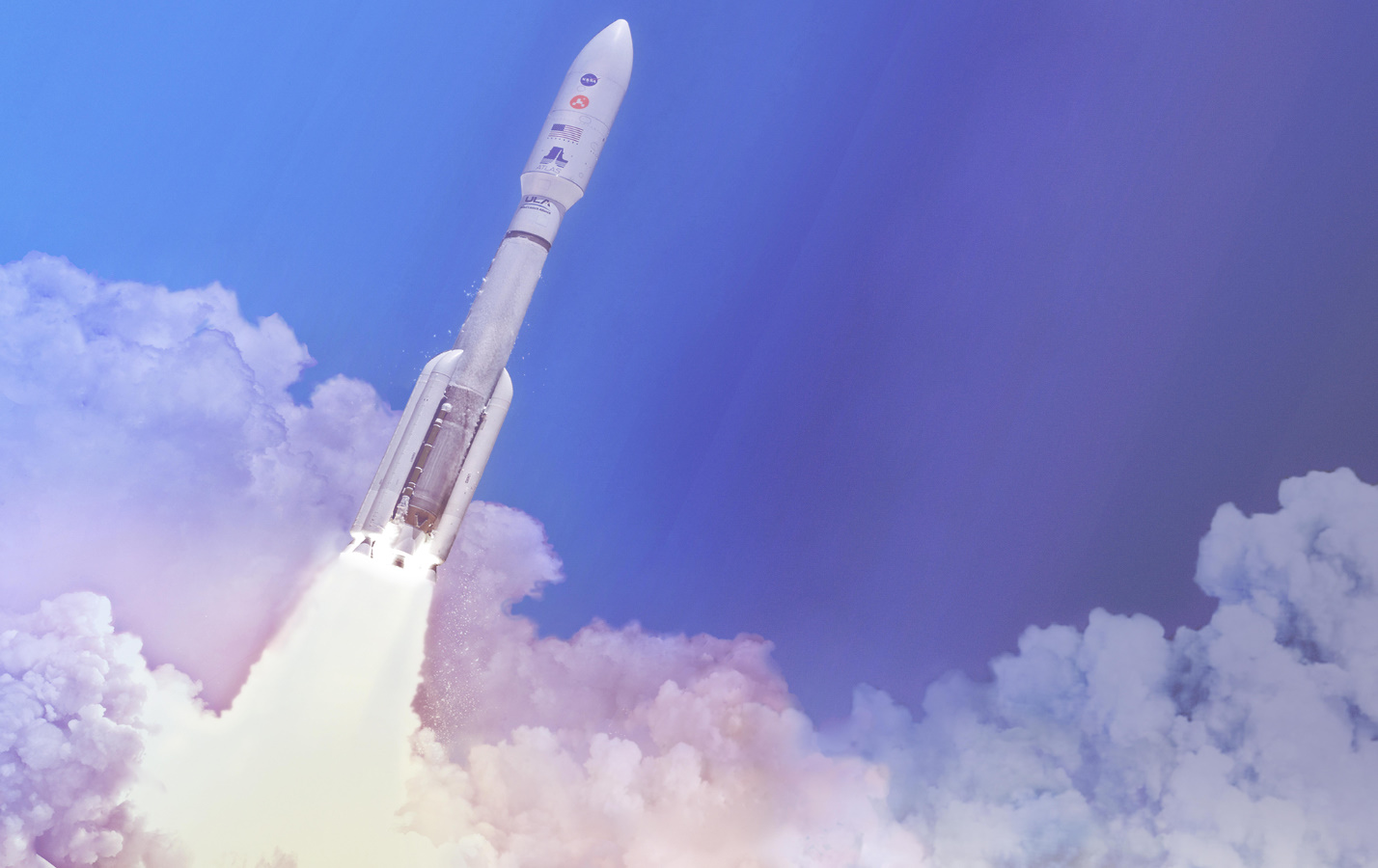 “But there’s [also] a point in space that we’re trying to achieve.  And so on a given day, if you’re trying to achieve that same location in space, you’re essentially shifting the trajectory.  And in this instance, we’re essentially shifting the coast duration, so we start the second burn at the optimal time, and then we’re using our RAAN steering capability and those types of things.”

“That’s what’s allowing us to adjust the trajectory across the window to hit that same point.  And then day-to-day, you have an energy requirement that’s a little different, so we target that across day-to-day as well.”

One other fascinating element to the trajectory work is that regardless of the day it launches, Perseverance will still land on Mars on 18 February after a successful launch and cruise portion of the mission.

This element of the trajectory design actually doesn’t come from ULA but from the Jet Propulsion Laboratory (JPL) and the mid-course correction maneuvers that will be performed along the way to precisely align the aeroshell to intercept Mars at a specific time at a specific point to enter the Martian atmosphere and descend for a landing at Jezero Crater.

“It’s more the JPL side of the trajectory design,” added Gaytri Patel. “They have their planned correction maneuvers along the way … to align the vehicle for their entry, descent, and landing.  So it’s really sort of on their side.”