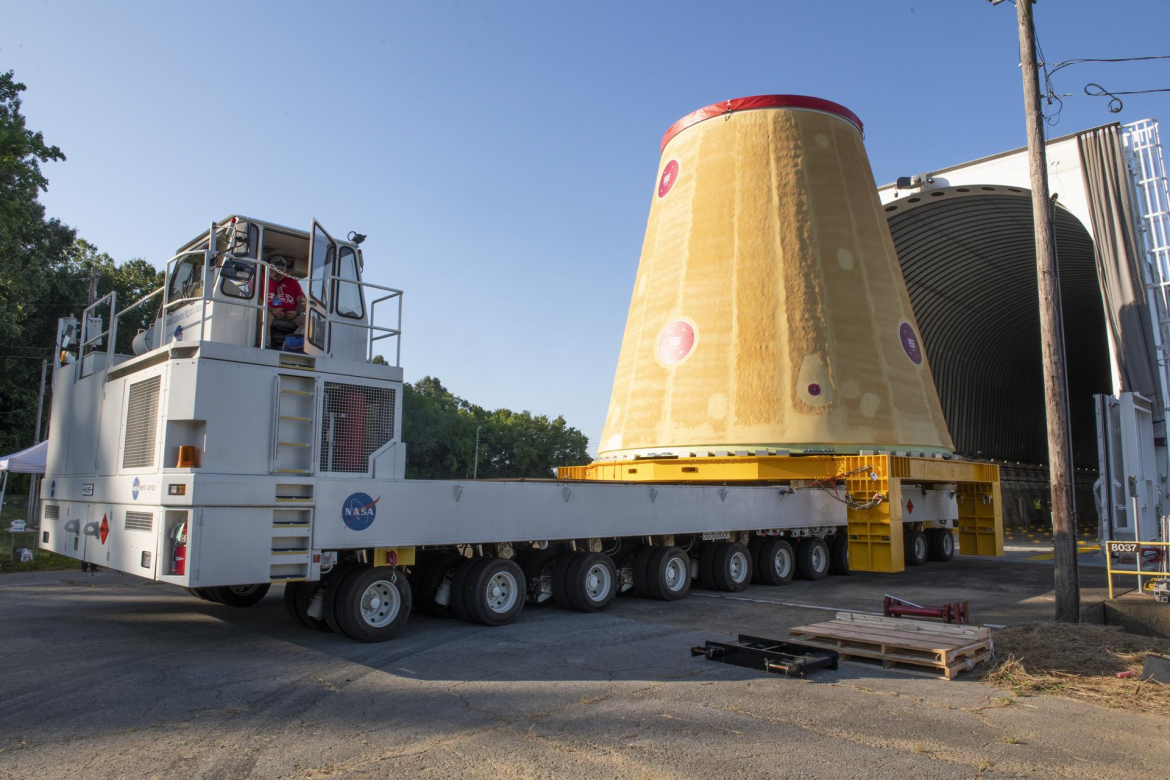 The interstage connector for the first NASA Space Launch System (SLS) vehicle was delivered to NASA in mid-July and is in transit to its launch site. The Launch Vehicle Stage Adapter (LVSA) was completed by Teledyne Brown Engineering at the Marshall Space Flight Center (MSFC) in Alabama and officially turned over to the agency for use on the Artemis 1 launch, tentatively scheduled for late 2021.

While the first flight LVSA unit was placed on NASA’s Pegasus barge and towed through U.S. waterways to the Kennedy Space Center (KSC) in Florida, work to weld the second LVSA structure is well underway at MSFC. Plans are to have the second unit ready for the Artemis 2 vehicle by mid-2022 and NASA has also placed orders for the long-lead raw materials necessary to build fabrication of a third LVSA.

Early on July 17, the LVSA was rolled out of its final integration site, Building 4649 at Marshall, to the agency’s Pegasus barge for the trip to the launch site. Tugboats moved the barge out to the Mississippi River and south to the New Orleans area, where the barge stopped at the Michoud Assembly Facility (MAF).

“The LVSA departed Marshall back on the 17th which was last Friday and so as of today [it] is on the Pegasus barge being transported down to KSC,” Keith Higginbotham, NASA LVSA manager for the SLS Program, said on July 23. “It arrived at MAF just today and they offloaded another element’s hardware.”

“They offload that today and they also put the spider assembly on the Pegasus as well and so that’ll be getting transported along with the LVSA down to the Cape. We’re scheduled to get to the Cape barring any weather delays probably about the second of August.” 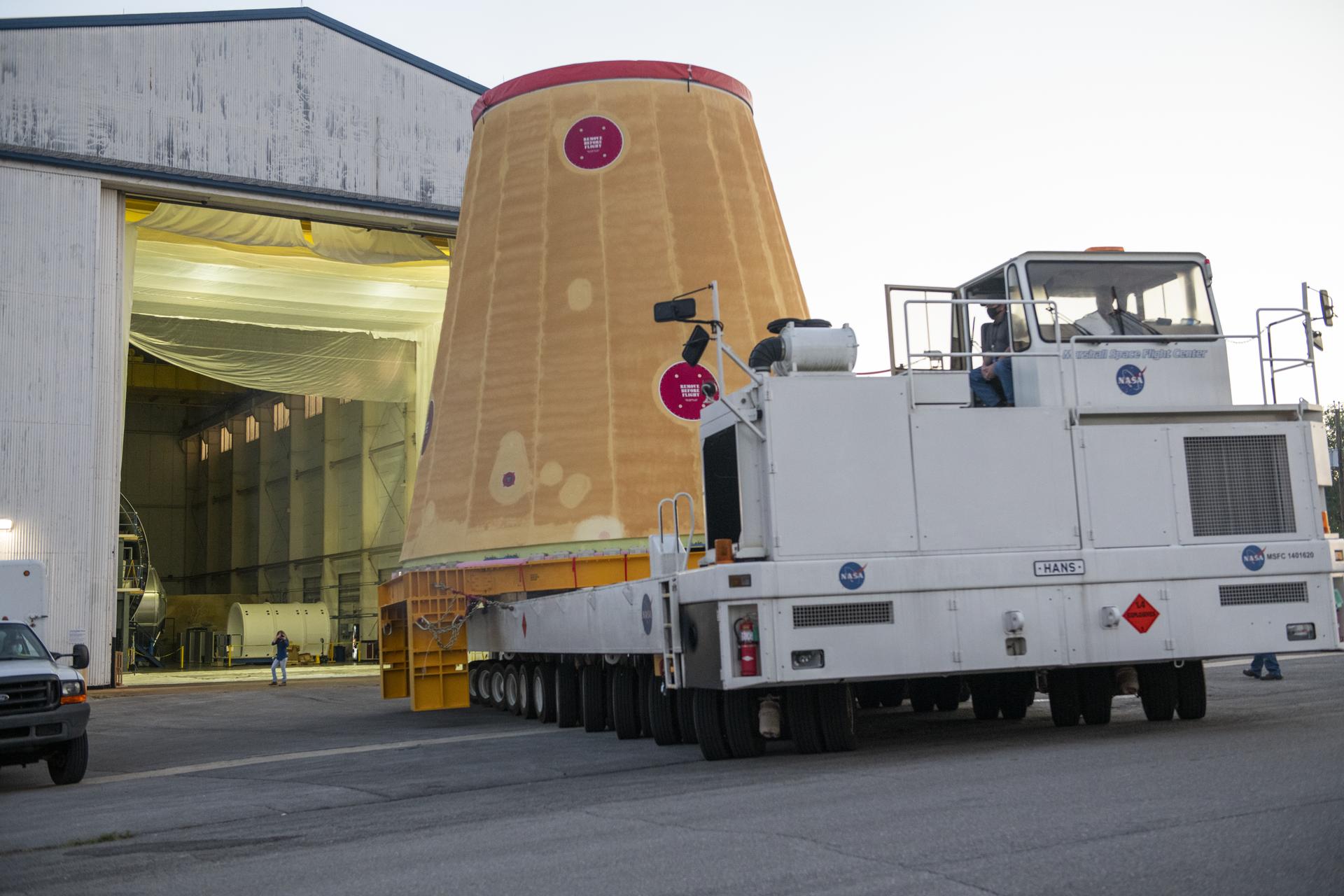 (Photo Caption: A transporter rolls the LVSA out of Building 4649 at MSFC on July 17. The adapter was transported to the Pegasus barge for shipment to its Kennedy Space Center launch site.)

The lift spider is a twenty-plus ton fixture that is attached to the forward end of Core Stages to help lift and rotate them from horizontal to vertical orientation and vice versa. It will be used at KSC to help mate the first Core Stage to the SLS solid rocket boosters (SRB) next year.

The other lift spider is currently attached to that first Core Stage as it goes through its Green Run test campaign at the Stennis Space Center in Mississippi. In addition to the lift spider, two of the self-propelled modular transporters (SPMT) used to move Core Stages outdoors on their horizontal transporter were also loaded on the barge at MAF, with the spider mounted on one of them. The SPMTs will eventually head back with Pegasus to Mississippi to pick up the Core Stage at the conclusion of the Green Run campaign for delivery to KSC.

After the exchange of secondary equipment at MAF, the barge was picked up by oceangoing tugboats and departed on July 24. From New Orleans, the route to the launch site goes through the Gulf of Mexico, south and around the Florida Peninsula, and then north up the east coast to Port Canaveral and eventually the Turn Basin at KSC.

On arrival, NASA’s Exploration Ground Systems (EGS) program at KSC will receive the LVSA for eventual integration of the first SLS vehicle for launch on Artemis 1. The element will be stored in the Vehicle Assembly Building (VAB) until those activities start, likely next year.

The timing of launch vehicle integration (also called “stacking”) on Mobile Launcher-1 (ML-1) depends on when the Core Stage arrives at KSC.  The SLS core will be the last major hardware element to arrive at the launch site for Artemis 1 and its delivery is dependent on completion of the ongoing Green Run testing.

For now, the LVSA will be parked in High Bay 4 of the VAB, which is a staging area for most SLS hardware prior to lifting into the High Bay 3 integration cell where ML-1 is set up. In the meantime, some practice exercises will be conducted while the LVSA is in storage.

“We have some additional ground support equipment like internal access platforms and a test stand,” Allison Mjoen, NASA EGS Operations Project Engineer, said. “We want to be able to run through getting our operational experience with the technicians and the engineers to use those platforms and there are some human factors assessments that’ll be associated with that as well.”

“Those are the platforms that we will be installing inside the LVSA once we’re stacked,” she noted. “So we’ll be doing preps like that as well to make sure our team is in good working order once we go into our integrated operation.” 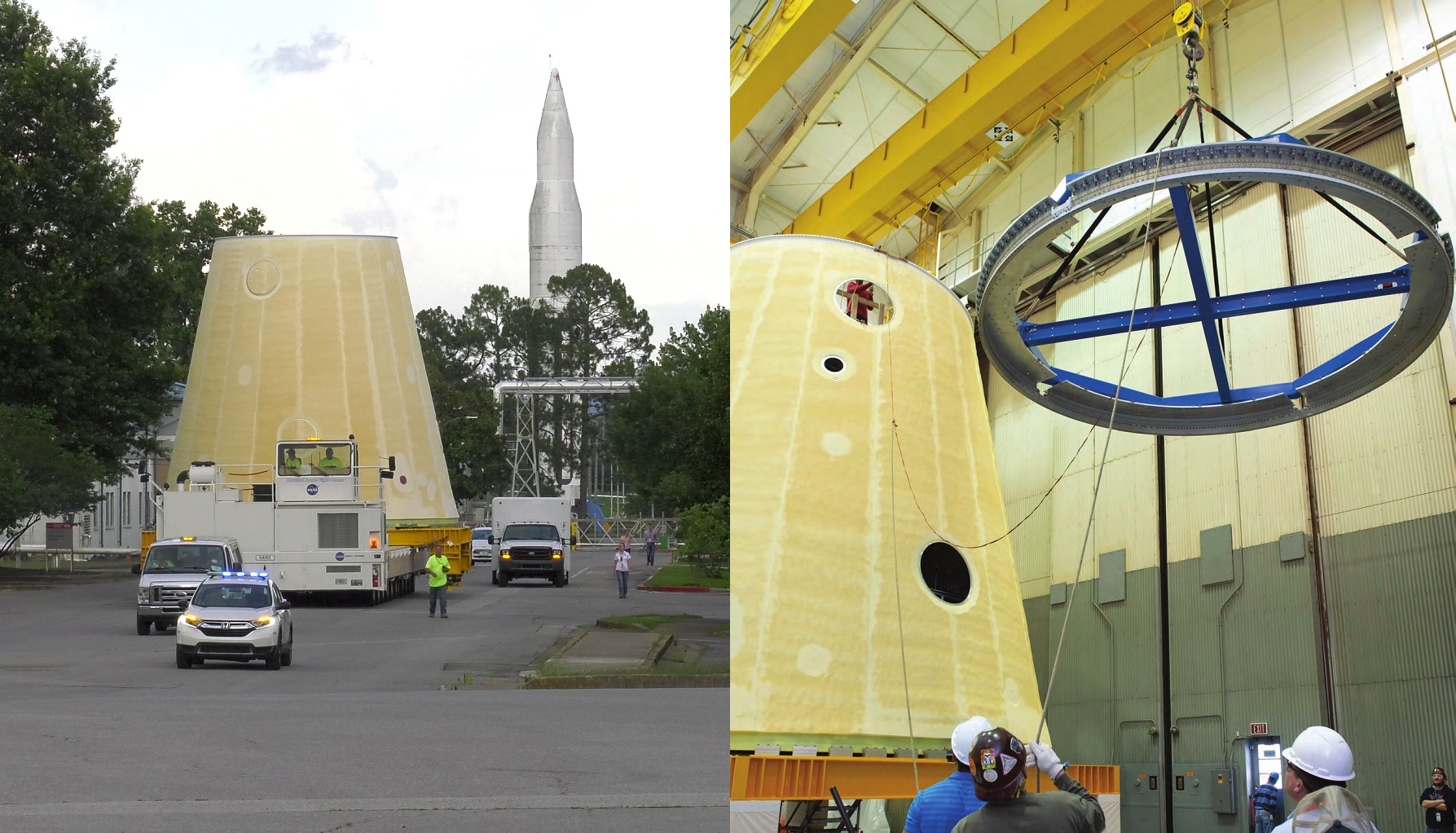 (Photo Caption: On the left, the LVSA was moved to Building 4649 at MSFC for final integration work in June, 2018. On the right later in 2018, a frangible joint assembly is lifted to be attached to the top of the adapter; the assembly will separate the ICPS upper stage from the LVSA during launch.)

The LVSA is part of the Integrated Spacecraft and Payload Element (ISPE) of the SLS Block 1 vehicle; in both Crew and Cargo configurations, it connects the Core Stage with the Block 1 upper stage, the Interim Cryogenic Propulsion Stage (ICPS).

The adapter is primarily a structural interstage connector, with the bottom bolted to the forward skirt of the Core Stage and the top attached to the hydrogen tank of the ICPS. Most of the upper stage including its single RL-10B-2 engine and stowed nozzle extension is enclosed by the LVSA during launch and ascent.

Following Core Stage main engine cut off (MECO), the LVSA stays with the Core and the ICPS separates from the top of the adapter. The adapter includes a separation system and a frangible joint assembly that is sandwiched by the ICPS and LVSA.

The frangible joint assembly instantaneously separates the upper stage from the LVSA at the appropriate time without generating any debris from the explosive detonation.

The outside of the adapter is covered with spray-on foam insulation (SOFI). In the case of the LVSA, the foam thermally protects the adapter and its contents from heating during ascent through the lower atmosphere. 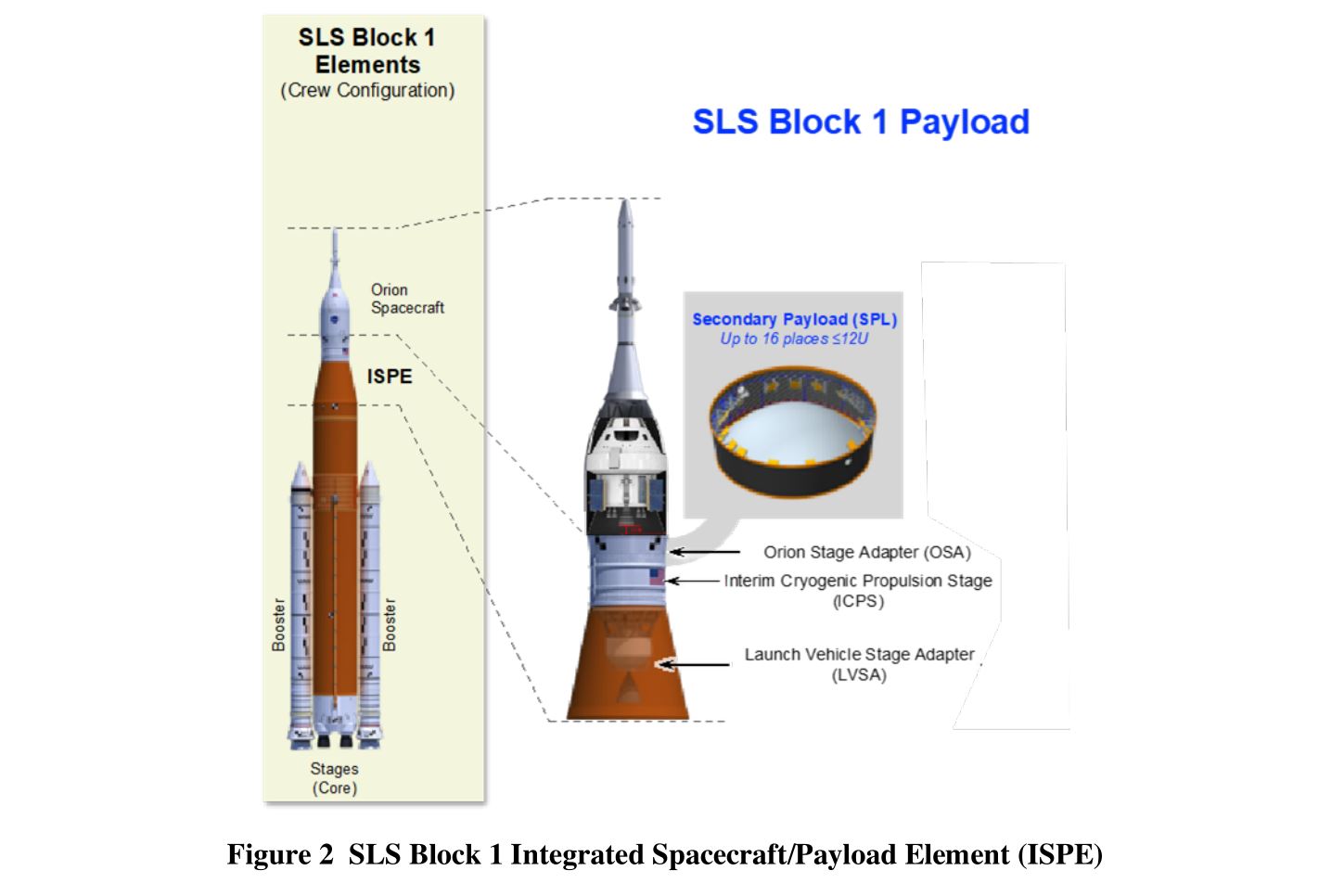 Although the adapter is mostly structure, it also includes electrical harnesses to connect the Core Stage flight control system below with the LVSA separation system, upper stage flight computers and the Orion spacecraft and crew above.  The vehicle is also covered with development flight instrumentation (DFI) for its first launch and all those sensors are connected to the Core Stage’s data acquisition system.

“ICPS will fit down in the volume of the LVSA, so you have some DFI that’s connected through our adapter that runs from top to bottom, so there’s some of that,” Higginbotham noted. “The other thing that I would mention is that we’ll have a couple of camera assemblies inside so that once the separation event occurs, the ICPS will go about its way and upon its departure from inside the LVSA there will be cameras that will capture that event as it occurs.”

The two cameras in the stage adapter are among several mounted around the launch vehicle that are wired into the Camera Control Unit (CCU) in the Core Stage’s intertank that will collect data from them during launch and ascent. From a few seconds prior to MECO to several seconds after, views from the LVSA cameras capturing ICPS separation will be relayed via telemetry to ground receiving stations.

There are also multiple circular access doors around the circumference of the adapter, which will be used during stacking operations at KSC. “Once we get ready to do the stacking [they] will allow us to go through those access doors with platforms [when] we actually do the mating,” Higginbotham said.

The Artemis 1 LVSA is the first flight unit produced by prime contractor Teledyne Brown Engineering but the second structure fabricated for the program. The first unit was the basic welded structure used in a structural test article of the ISPE elements.

“The first one that we built for the structural test article (STA) was basically more of a monocoque structure that didn’t have all the orthogrid patterns and stuff that we did [for the flight unit],” Higginbotham noted. “We took it up to limit and ultimate load so we qualified that the hardware will be able to fly with the requirements that you would have when you have people on board.” 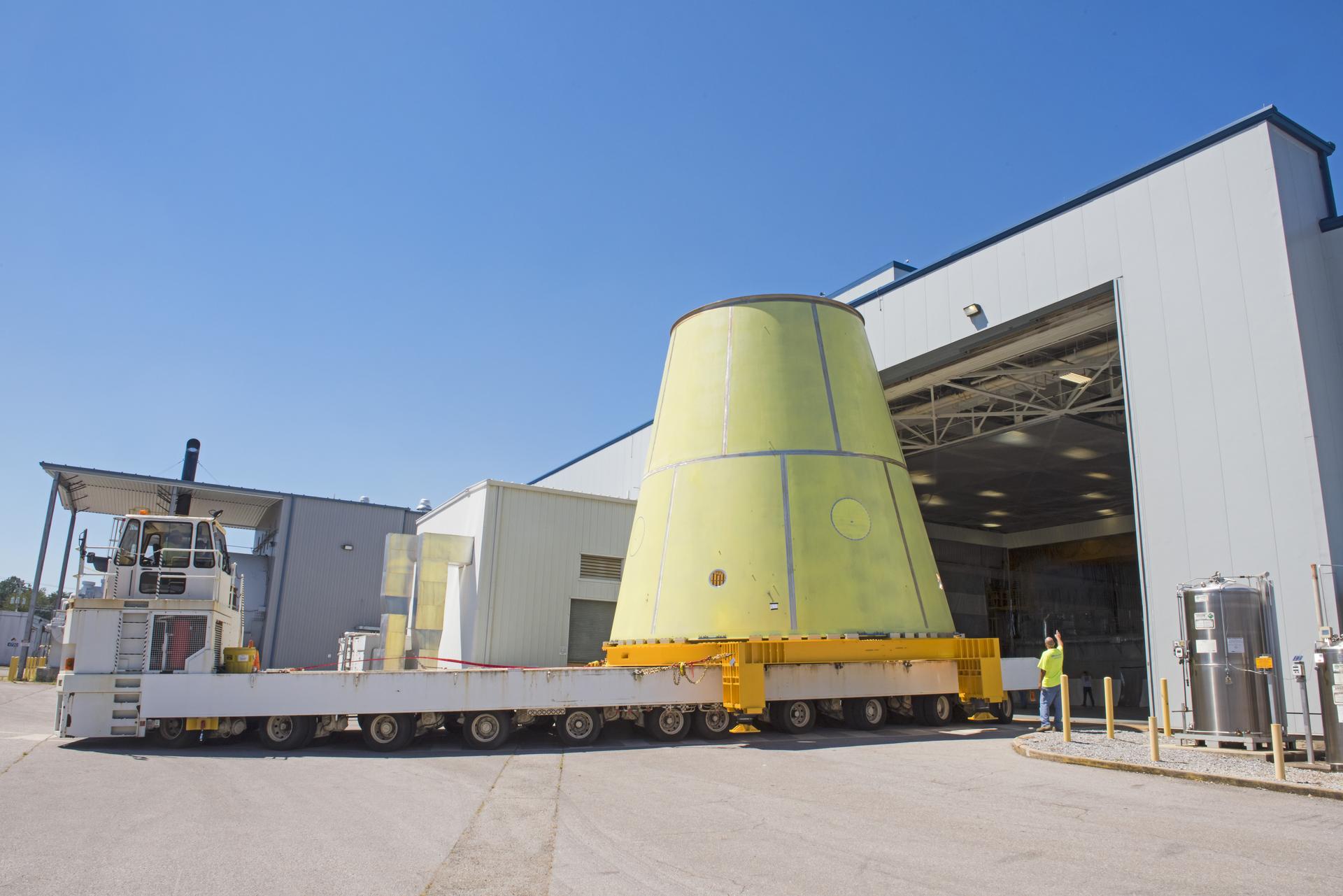 (Photo Caption: The welded LVSA structure for the first SLS launch is moved into Building 4707 at MSFC in August, 2017, for application of its spray-on foam outer covering.)

The first flight unit was welded in the same location, the Advanced Weld Facility in Building 4755 at Marshall. The structure is a tapered cone composed of sixteen panels and a ring at the top and bottom. The panels were manufactured by AMRO Fabricating Corporation in California before delivery to Teledyne Brown based in Huntsville, Alabama, area near Marshall.

“All the plates were machined and fabricated out there [at AMRO],” Higginbotham said. “They go through a proprietary bump-forming process that they use to make the panels for this kind of structure.”

“They shipped the panels to Teledyne where it goes through inserts and installations and then gets transferred out to Marshall.”

Following welding, the completed structure was transferred to Building 4707 at Marshall in August, 2017, for thermal protection system (TPS) application. The flight units are treated with primer for corrosion protection on the exterior before being sprayed with SOFI.

The LVSA was moved to Building 4649 at Marshall in June, 2018, for final integration activities in the high bay there.

“It was over in Building 4707 where the TPS was applied and finished, then it got transported over to Building 4649 where we did most of the final integration work,” Higginbotham noted. “So that was where the FJA, the frangible joint assembly, got installed and then it was about three or four months to outfit the rest of it with the pneumatic actuation system, which is lined all within the inner walls of the LVSA.”

“We had that, we had the remainder of the DFI sensor cabling that we had to install, we had the camera assemblies, and then the other major thing that I would mention is the acoustic blankets that we had to put on the inside, that was one of the final things that were installed inside.”

Higginbotham also noted that a hazardous gas vent assembly and Environmental Control System (ECS) vent assembly were also installed during final integration. As launch vehicle stacking is finally drawing near, the element was officially transferred from Teledyne Brown to NASA at Marshall for launch processing some time after delivery to KSC.

“We took the ownership when it vacates 4649 and it starts its trip down to the Cape, that’s when NASA takes over the hardware,” Higginbotham said.