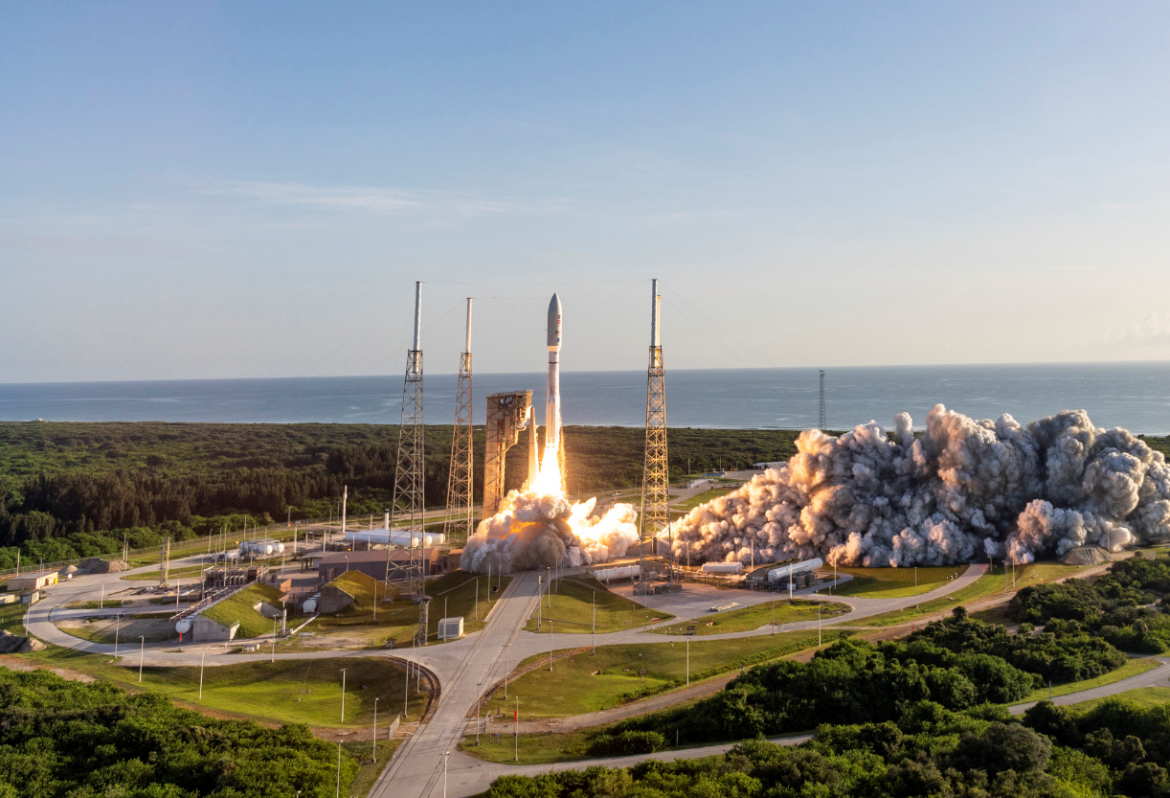 Liftoff of the third of our world’s three missions to Mars during the current interplanetary transfer window occurred Thursday, 30 July 2020 at the start of a two hour launch window that opens at 07:50 EDT.

Officially known as Mars 2020, the mission was formally announced by NASA on 4 December 2012 — just less than four months after the Curiosity rover’s technologically astounding landing in Gale Crater on Mars.

In fact, NASA sought to capitalize on the success of Curiosity and the overall science platform of that rover’s design with the Mars 2020 vehicle, incorporating lessons learned and expanding the new rover’s overall capabilities to include detection of the biosignatures of past microbial life as well as collection and bottling of Martian samples for future return to Earth.

These changes, along with the finalized suite of scientific instruments, brought Perseverance’s overall mass to 1,025 kg, heavier than Curiosity (at 899 kg).

Given the overall demand of the mission and its baseline from that of Curiosity’s, Perseverance carries a Multi-Mission Radioisotope Thermoelectric Generator, or MMRTG, that is in fact a backup to the one used for Curiosity. 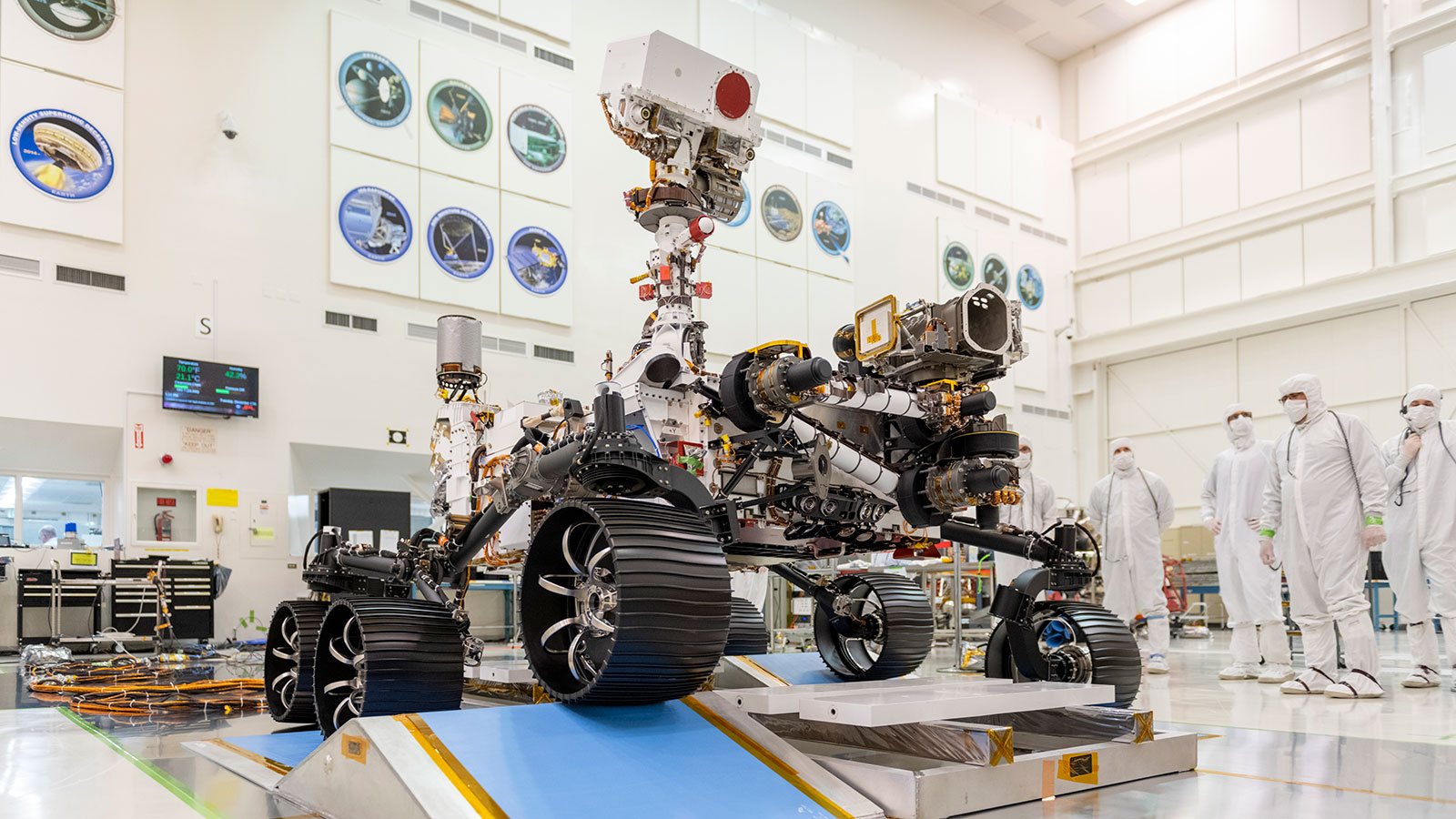 Perseverance undergoing final testing at the Jet Propulsion Laboratory before travelling to its launch site in Florida. (Credit: NASA/JPL)

The MMRTG — via the natural decay of plutonium-238 — will provide a consistent 110 watts of power as well as heat throughout the mission and offers a potential operational lifetime of 14 years for the rover.

Use of a nuclear power source allows science operations to occur at any time and during most seasonal conditions on Mars, including during the planet’s notorious dust storms — the last major one of which claimed the operational life of the Opportunity rover which relied on solar panels for power.

Perseverance is also equipped with two rechargeable lithium-ion batteries to aid operations during peak scientific demands, a few of which are predicted to exceed the maximum continuous output of 110 watts from the MMRTG.

Overall, seven scientific instrument payloads will draw power from the rover’s systems, including:

Mastcam-Z will provide Perseverance with its vision system, including the ability to zoom, focus, 3D image, and high-speed film distant terrain in detail.  According to NASA, the vision system of Mastcam can clearly observe a common housefly the length of a football (soccer) field away.

The Mars Environmental Dynamics Analyzer (MEDA) is a weather station that will monitor wind direction and velocity, local temperature and humidity, and the amount and size of dust particles in the atmosphere.

🚀 Tomorrow, we’re launching our @NASAPersevere rover to Mars. Perseverance will search for signs of ancient microbial life & pave the way for human exploration beyond the Moon.

Tag your questions with #CountdownToMars for a chance to have them answered in our launch broadcast! pic.twitter.com/RjWEBqxP2Y

MEDA is the latest of an ongoing series of investigations from the international rover, lander, and orbiter fleet at Mars to characterize martian weather patterns and develop accurate models — as future human habitats on Mars will rely on weather forecasts.

In the same theme, the Mars Oxygen In-Situ Resource Utilization Experiment (MOXIE) will examine ways to produce oxygen from Mars’ atmosphere for both life support and rocket propellant needs.

While carbon dioxide is abundant on Mars, accounting for 96% of the planet’s atmosphere, oxygen is not.  At just 0.13% concentration, oxygen is a rare commodity.

However, on Earth a biological example of the exchange of carbon dioxide from the atmosphere for a release of oxygen comes in the form of trees and the various flora of our planet.

MOXIE seeks to replicate that biological, life-sustaining process on a technological level, taking in carbon dioxide from the Martian atmosphere and producing oxygen.

Meanwhile, the Planetary Instrument for X-ray Lithochemistry (PIXL) will become the first instrument specifically tasked with finding signs of past microbial life on Mars.

The instrument will be able to identify the specific changes to textures and chemicals of Martian rocks left behind by ancient microbial life even if only present in the most minute quantity.

PIXL also comes equipped with a camera that will allow close-up, highly detailed imaging of rock and soil textures with clear resolution of objects the size of a grain of salt. 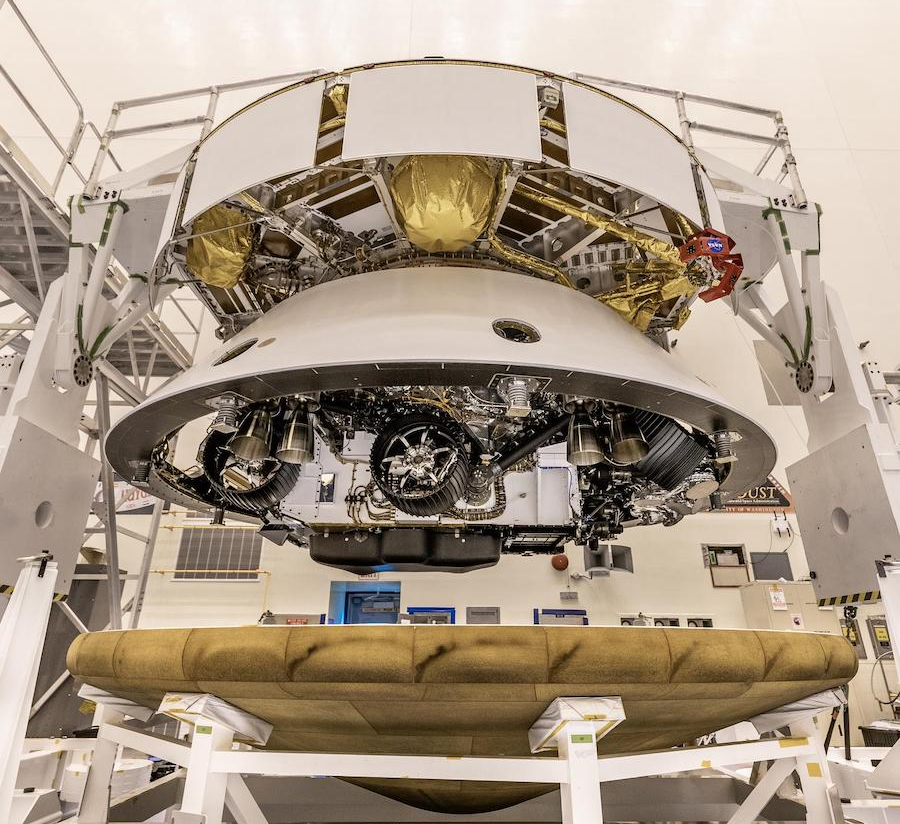 Perseverance and Ingenuity are buttoned-up for launch inside the aeroshell, which will transport them to Mars. (Credit: NASA)

Working partly in tandem with PIXL will be the Scanning Habitable Environments with Raman and Luminescence for Organics & Chemicals (SHERLOC) instruments, which will use a camera, spectrometers, and a laser to search for organics and minerals potentially altered by a water environment — thereby indicating a sign of potential past microbial life.

“Key, driving questions are whether Mars is or was ever inhabited, and if not, why not?” said Luther Beegle, Principal Investigator for SHERLOC.  “The SHERLOC investigation will advance the understanding of Martian geologic history and identify its past biologic potential.”

Likewise, SuperCam will also seek organics via a camera, laser, and spectrometers while also focusing on the atomic and chemical composition of rocks and soils that were changed over time by water.

Looking below the surface rocks, the Radar Imager for Mars’ Subsurface Experiment (RIMFAX) will use ground penetrating radar to reveal the internal structure of Mars in new detail.

This will mark the first time a NASA mission carries a radar instrument to the Martian surface; RIMFAX will be able to detect water, brine, or ice located more than 10 m (30 ft) beneath the surface.

Additionally, Perseverance’s robot arm, Bit Carousel, and Adaptive Caching Assembly will pick up, pack, and leave behind samples of the Martian surface scientists think worthy to return to Earth by a future Mars mission.

But it’s not just the instruments mounted to or used by the rover that are a highlight of the mission.  Perseverance also carries the Ingenuity Mars helicopter, the first-ever helicopter to be sent to another planet.

The helicopter itself is the scientific payload in that it is one of two experimental technologies flying to Mars on this mission.  The other is MOXIE.

Ingenuity will test the ability to perform autonomous powered flight operations through the Martian atmosphere and give scientists and mission planners invaluable data on how rotorcraft operate in another planet’s atmosphere.

This technology not only applies to potential future Mars helicopters that could ride along with flagship robotic missions or potentially help future astronauts explore difficult terrain, but also to the upcoming Dragonfly mission which will send a rotorcraft to Saturn’s moon Titan to fly a scientific laboratory around to different regions of the atmosphere-ed moon.

Designed to communicate directly with Perseverance, Ingenuity will never fly more than 1 km away from the rover.  Perseverance will then relay Ingenuity’s transmissions up to one of the satellites in Martian orbit which will in turn transmit the signal back to Earth.

Launch and cruise to Mars

After lifting off from Space Launch Complex 41 (SLC-41), the Atlas V performed a pitch and roll maneuver to put itself onto the proper azimuth, or compass heading, to move east-southeast away from the Florida launch center out over the Atlantic Ocean — passing just north of The Bahamas.

After the first 90 seconds of flight, the four solid rocket motors from Aerojet Rocketdyne burned out and separated a few seconds later, leaving Atlas V under the power of its singular RD-180 engine. 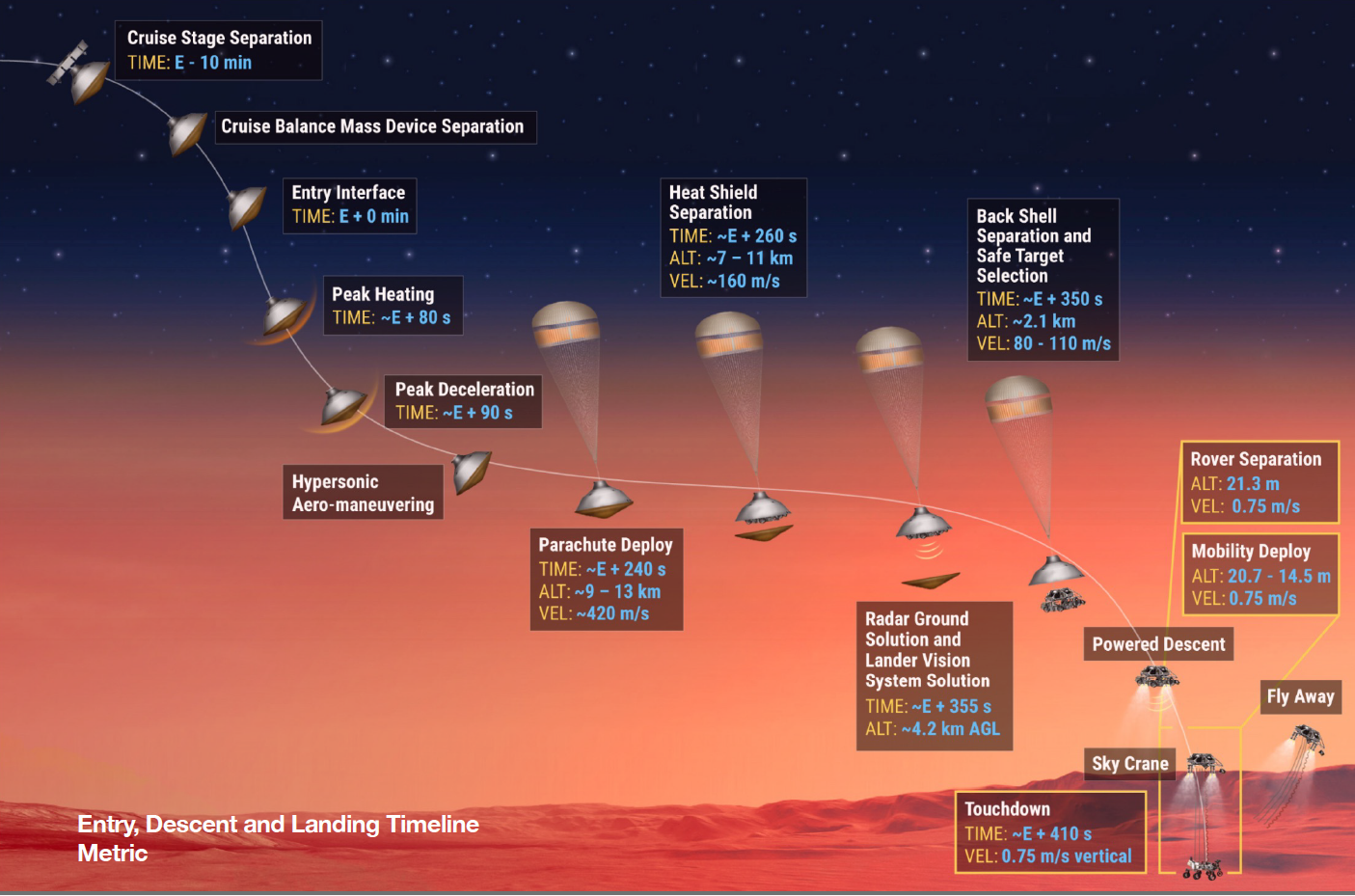 After Atlas V booster shutdown and separation, the single engine Centaur upper stage completed the task of hauling Perseverance into its initial Earth parking orbit of 167 x 250 km with a 29.1 degree inclination.

The approximately 8 minute long burn was designed to place the payload and Centaur upper stage into a heliocentric (Sun) orbit that almost perfectly intercepts Mars in February 2021.  Almost perfectly, but not quite — as the Trans Mars Injection burn is designed so the Centaur actually misses Mars when it flies by.

The cruise stage, attached to the aeroshell, therefore has to provide not just power, data, and communications, but also course correction capabilities to fine-tune the overall trajectory for a pinpoint intercept of Mars’ atmosphere in seven months time.

As it arrives at Mars for what is somewhat lovingly known as “The Seven Minutes of Terror,” the cruise stage was separate, and 10 minutes later Perseverance — safely inside its protective aeroshell — will slam into the Martian atmosphere heat shield first.

Atmospheric friction will do the first part of the job of slowing the vehicle down as plasma builds around the aeroshell for the first couple minutes of entry and temperatures reach 1,300° C (2,370° F).

Once the aeroshell exits the plasma stage of entry, a hypersonic parachute will deploy to slow the capsule even further before the heat shield drops away and the entire rover/helicopter assembly drops out of the aeroshell and free falls toward the Martian surface for a few seconds.

At this point, the Terrain-Relative Navigation system added to Perservance’s landing system from that used on Curiosity in 2012 will be active.

This new system uses a downward facing camera mounted underneath Perseverance that will rapidly take photographs as the vehicle descends.  Those photographs will be instantly fed into the overall landing system database and compared to orbital images of the target landing area.

For the first time, unseen hazards at the landing site can be detected and the onboard landing system can then divert the entire assembly away from a hazard and to a safer location.

The series of firing retrorockets will then slow the vehicle to a hover 20 meters (65.5 feet) above the Martian surface.

At that point, a sky crane winch will activate and lower Perseverance to the Martian surface after the rover’s legs successfully deploy and lock into place.

The winch cable will then be severed and the retrorocket pack will fly itself safely away for a crash landing.

The entire 6 minute 50 second Entry, Descent, and Landing sequence is automated with no allowances for error or time to manually correct once the sequence begins.

The distance between Earth and Mars on the date of Perseverance’s landing means that by the time controllers at the Jet Propulsion Laboratory receive the signal confirming the aeroshell has entered the Martian atmosphere, Perseverance will have already successfully landed or crashed onto the Martian surface.

Less than 24 hours to launch and the weather is cooperating with an 80% chance of favorable conditions. Alex Mather and Vaneeza Rupani, who named me and Ingenuity, are here to watch the launch from @NASAKennedy. #CountdownToMars

After landing, the rover’s computers will automatically switch from Entry, Descent, and Landing mode to Surface mode and begin a series of autonomous activities and checkouts for its first day on Mars, officially known as Sol 0.

A “Sol” is a single Martian day, lasting 24 hours 39 minutes 35 seconds, and will be the official time keeping designation used for the mission.