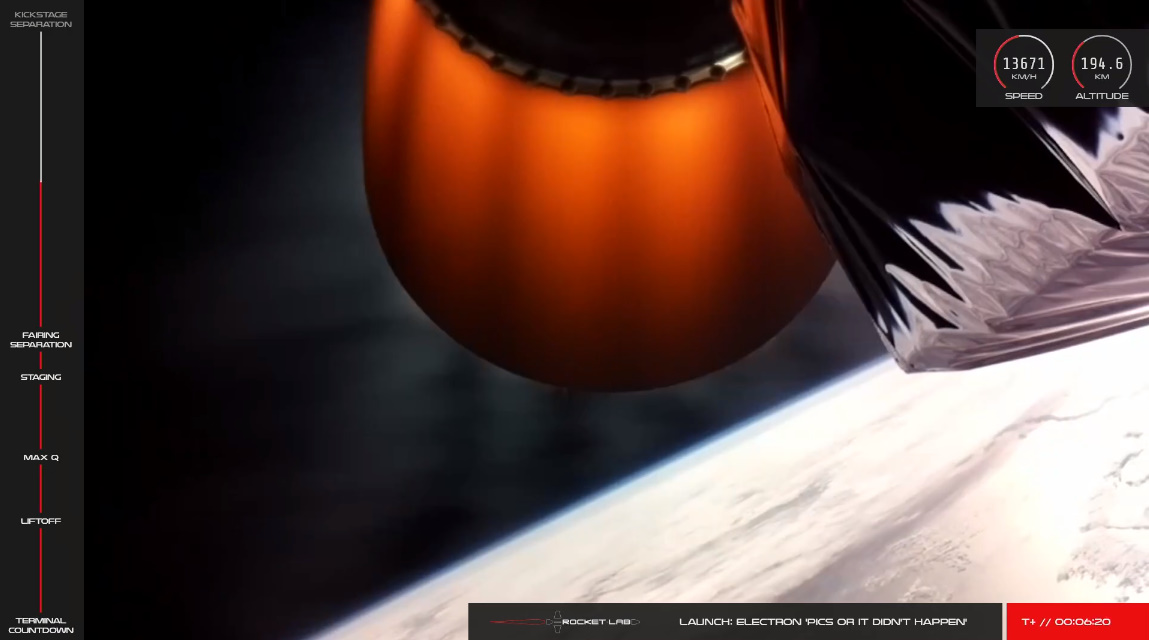 Nearly three weeks after the last flight of Rocket Lab’s workhorse Electron rocket, the California-based company performed the most rapid turnaround between launches to date with the launch of Electron Flight 13. However, the rocket failed during second stage flight. The mission – which featured seven small satellites as the payload – launched from Rocket Lab’s Launch Complex 1 Pad A at Mahia in New Zealand on Saturday, July 4 at 5:19 pm Eastern, 21:19 UTC (9:19 am NZT on Sunday, July 5).

For this mission, Electron lifted off with a total of seven payloads that were to be sent to separate destinations in low Earth orbit, with six out of the seven serving as Earth observation satellites. Because of this, Rocket Lab has christened the mission with the nickname “Pics Or It Didn’t Happen”.

An issue was experienced today during Rocket Lab's launch that caused the loss of the vehicle. We are deeply sorry to the customers on board Electron. The issue occurred late in the flight during the 2nd stage burn. More information will be provided as it becomes available.

The primary payload was the CE-SAT-1B spacecraft, which was procured by rideshare mission manager Spaceflight, Inc. and is the first mass-production remote sensing satellite built by Canon Electronics, Inc. CE-SAT-1B was to demonstrate Canon’s Earth-imaging technology, with multiple high-resolution and wide-angle cameras onboard the spacecraft to provide a resolution of 1 meter (3.28 feet) from a 600 km (372.8 mile) orbit.

This one is ready to fly! Check out Canon Electronics' CE-SAT-IB satellite that is onboard @RocketLab mission #PicsOrItDidntHappen. pic.twitter.com/JvjdaJVRFx

CE-SAT-1B was the second spacecraft built by Canon Electronics, with the first (CE-SAT-1) having launched as a secondary payload on an Indian Polar Satellite Launch Vehicle (PSLV) in June 2017. The satellite had an approximate launch mass of 50 kilograms (110.2 pounds).

Five other Earth-imaging spacecraft flew on the “Pics Or It Didn’t Happen” mission, with all five being SuperDove microsatellites manufactured and operated by Planet Labs. These satellites, which will flew under the designation “Flock 4e”, were equipped with new sensors to enable higher image quality and accurate surface reflectance values.

Each SuperDove spacecraft was outfitted with a five-element Maksutov-Cassegrain telescope and a 29 megapixel charge-coupled device (CCD) detector, thereby providing a wider field of view and greater image quality when compared to previous generations of Dove satellites. A SuperDove weighs in at around 5 kilograms (11 pounds) at launch.

We’re at L-9 days until the #PicsOrItDidntHappen mission and five @planetlabs SuperDoves are headed to LC-1 for integration! We deployed a Dove for Planet on our very first orbital mission in 2018, so it’s exciting to be launching the next gen spacecraft for them now. pic.twitter.com/L6sWViMl15

Planet Labs is no stranger to launching satellites on Electron rockets, with a “Dove Pioneer” spacecraft having launched on Electron Flight 2 in January 2018, also known as the “Still Testing” mission. The launch was successful.

The final payload to be launched on the “Pics Or It Didn’t Happen” mission was Faraday-1, built for and operated by British small spacecraft service provider In-Space Missions. The spacecraft itself consisted of a 6U CubeSat that is able to host small science payloads for start-up companies, institutions, and larger research and development groups who are looking for a low-cost method of transportation to low Earth orbit.

In addition to its hosted payload capabilities, Faraday-1 was to provide an in-flight demonstration of In-Space Missions’ own software-defined payload that will enable uploadable payload services on future missions. Four other satellites are currently under contract as part of the Faraday service, according to In-Space. 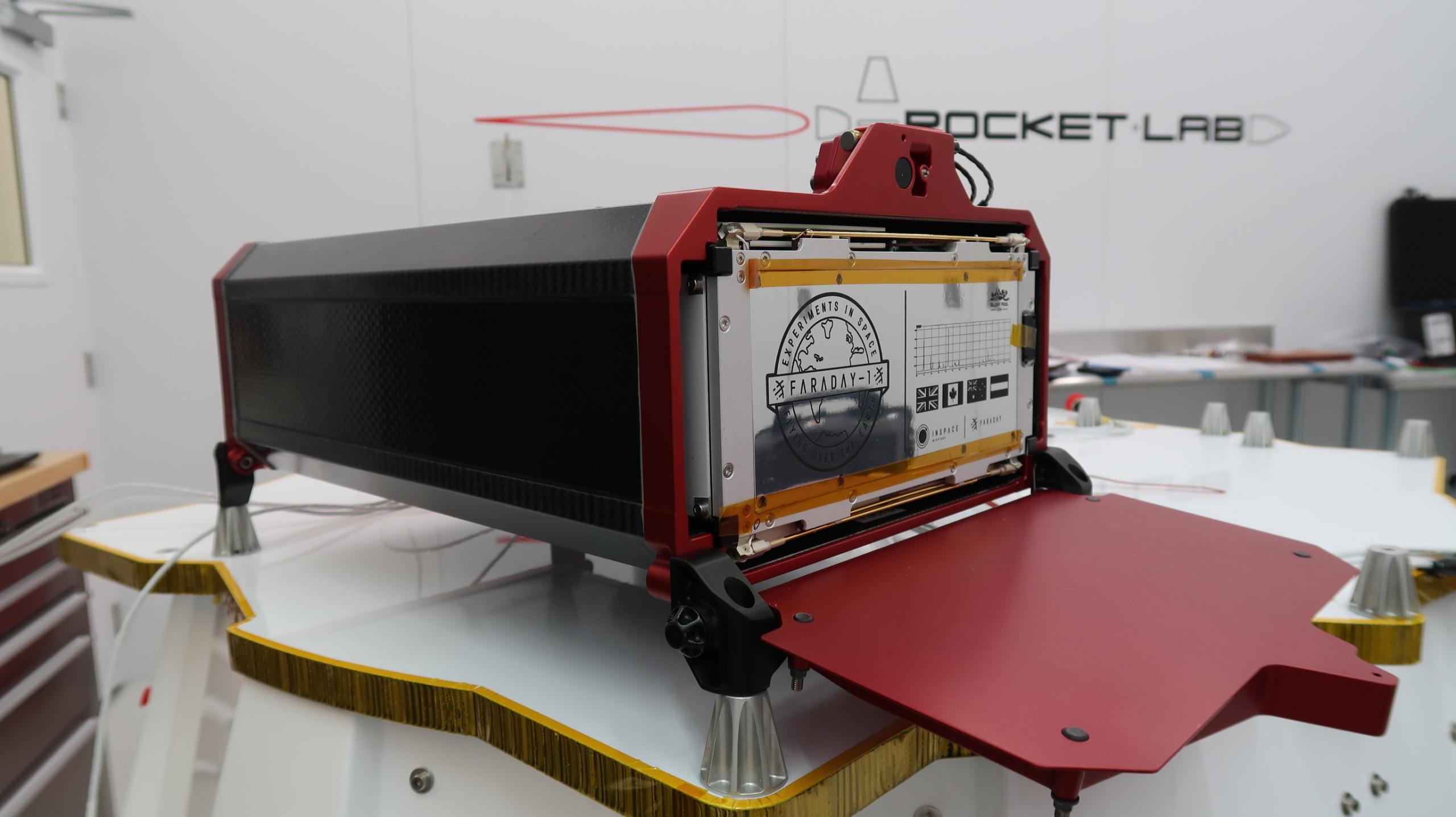 All of the payloads that flew on Electron Flight 13 were to be deployed into an approximately 500 kilometer (310.6 mile) Sun synchronous orbit, with an inclination of 97.5 degrees. Electron’s “Curie” kick stage – named for the additive manufactured Curie engine – was to assist in the safe deployment of each spacecraft into its target orbit after launch.

The launch took place out of Rocket Lab’s Launch Complex 1 Pad A, located at the Mahia Peninsula in New Zealand.

The countdown began 6 hours before launch, marked by the closure of the road to the launch site. This is done to ensure the safety of both vehicles and residents located near the area.

At T-4 hours, the Electron rocket was lifted vertical at Launch Complex 1 and filled with RP-1 fuel (a highly refined grade of kerosene). While this is taking place, all launch pad personnel left the pad area, and the pad was closed. Cryogenic liquid oxygen was loaded into both stages of the vehicle starting at the T-2 hour mark. 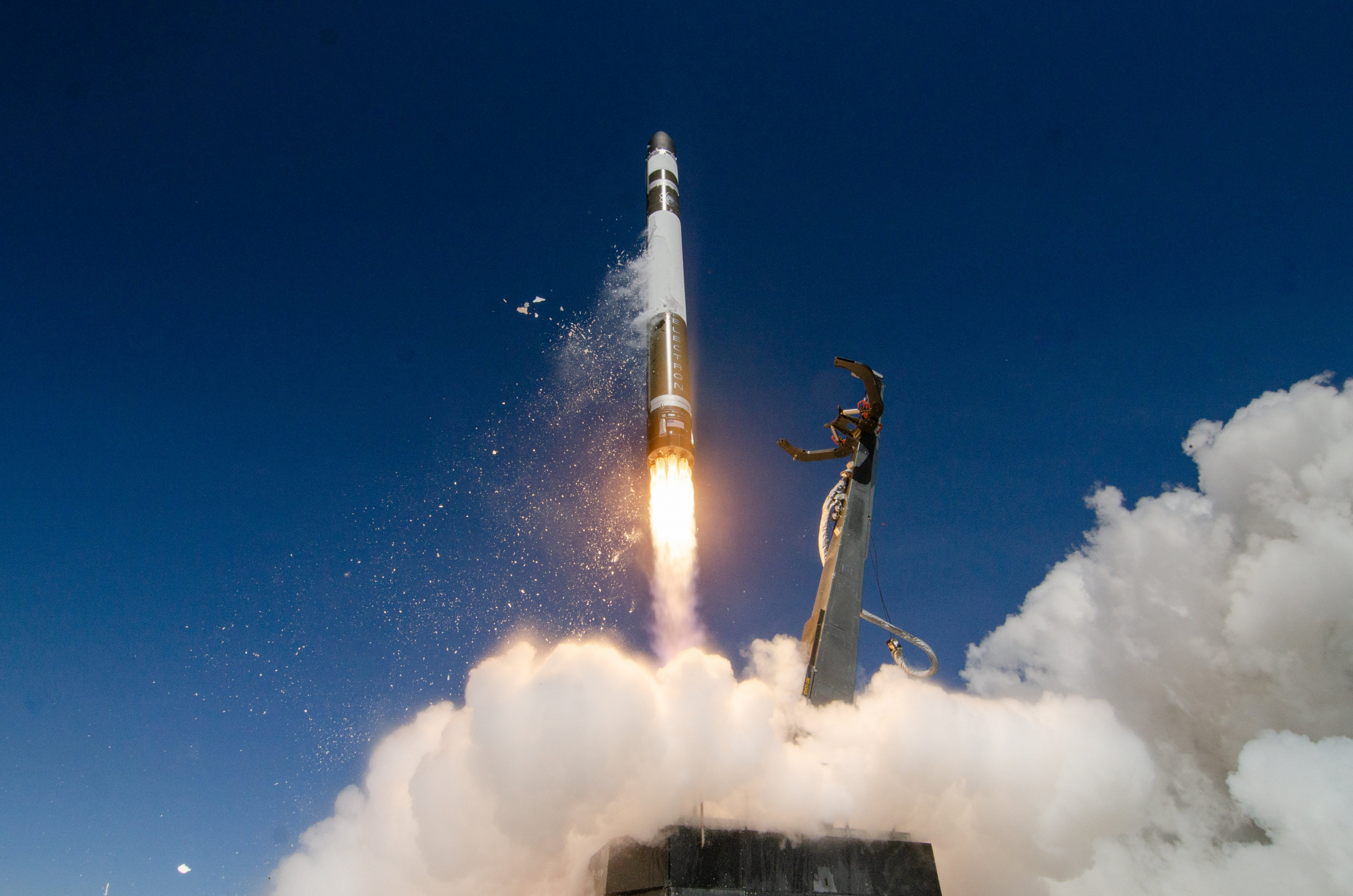 At T-18 minutes to liftoff, Rocket Lab’s launch director conducted a “go/no-go” poll of the launch team to verify that all of Electron’s vital systems are ready for flight. The launch team remained in control of the countdown up until the T-2 minute mark, at which point the rocket’s onboard flight computers took over and began the automated launch sequence.

The nine electric pump-fed Rutherford engines on Electron’s first stage ignited at T-2 seconds, with liftoff occurring at T-0 after a quick check of engine performance by the onboard computers.

These nine engines continued to burn until around 2 minutes and 35 seconds into the flight when all nine engines shut down simultaneously in an event known as MECO, or Main Engine Cutoff. Stage separation occurred approximately three seconds later, with ignition of the vacuum-optimized Rutherford engine on the second stage at around T+2 minutes and 41 seconds.

Payload fairing separation occurred at approximately 3 minutes and 14 seconds into the flight, thereby exposing the Curie kick stage and its payloads to the vacuum of space.

As the vacuum-optimized Rutherford engine continued to burn, the external batteries that power the engine’s electric turbopumps depleted over time, eventually becoming fully depleted and serving as excess mass. Once this happens, the external batteries are usually jettisoned overboard, and a separate battery system will start up in order to maintain a steady power supply to the turbopumps. This process is known as “battery hot-swapping”, and usually occurs at approximately 6 minutes and 30 seconds after launch.

This is the point at which the vehicle failed.

What we actually know is acceleration appeared to stop at +5:41 (thus thinking telemetry was lost – when it wasn't). There was a callout at T+6:30, "Initiating the SAP response plan. We don't know what SAP stands for, but clearly not a nominal situation. pic.twitter.com/snCMnRZDbP

The Vacuum Rutherford engine would have then continued to burn until T+9 minutes and 2 seconds when it would shut down in an event known as SECO, or Second Engine Cutoff. The Curie kick stage and its payloads would then separate approximately five seconds later.

A 2 minute and 27 second burn of the Curie engine was to begin at approximately 49 minutes and 39 seconds into the flight. This would have place the kick stage in the target orbit required for payload deployment, which was to take place approximately an hour after launch.

With a new Electron rocket built every 18 days, Rocket Lab was aiming to conduct monthly launches throughout the remainder of 2020 and into 2021, including the first launch from the company’s Launch Complex 2 at Wallops Flight Facility in Virginia (launching NET Q3 2020) and the launch of a NASA spacecraft to a near-rectilinear halo orbit around the Moon using an Electron rocket and Photon satellite bus (also set to launch from LC-2 NET 2021).

The impact of Saturday’s failure may impact on these plans.

Rocket Lab is also working on bringing its second pad at Launch Complex 1, also known as Pad B, online to facilitate a more rapid launch cadence from Mahia. Construction of the pad facilities and infrastructure is still ongoing, with completion scheduled to take place in late 2020.

Get ready for back-to-back missions from LC-1A & LC-1B. We’re proud to announce we’re launching a pair of missions for @NatReconOfc from our two separate pads at Launch Complex-1. This is responsive access to space in action for small sats. pic.twitter.com/0ekvTVE3He

Both pads at LC-1 will support the back-to-back launches of the RASR-3 and RASR-4 missions for the National Reconnaissance Office (NRO) as part of the Rapid Acquisition of a Small Rocket contract, in which the agency will explore new opportunities for launching small spacecraft through a rapid, streamlined approach. Both missions are currently scheduled to launch on Electron rockets no earlier than the spring of 2021.