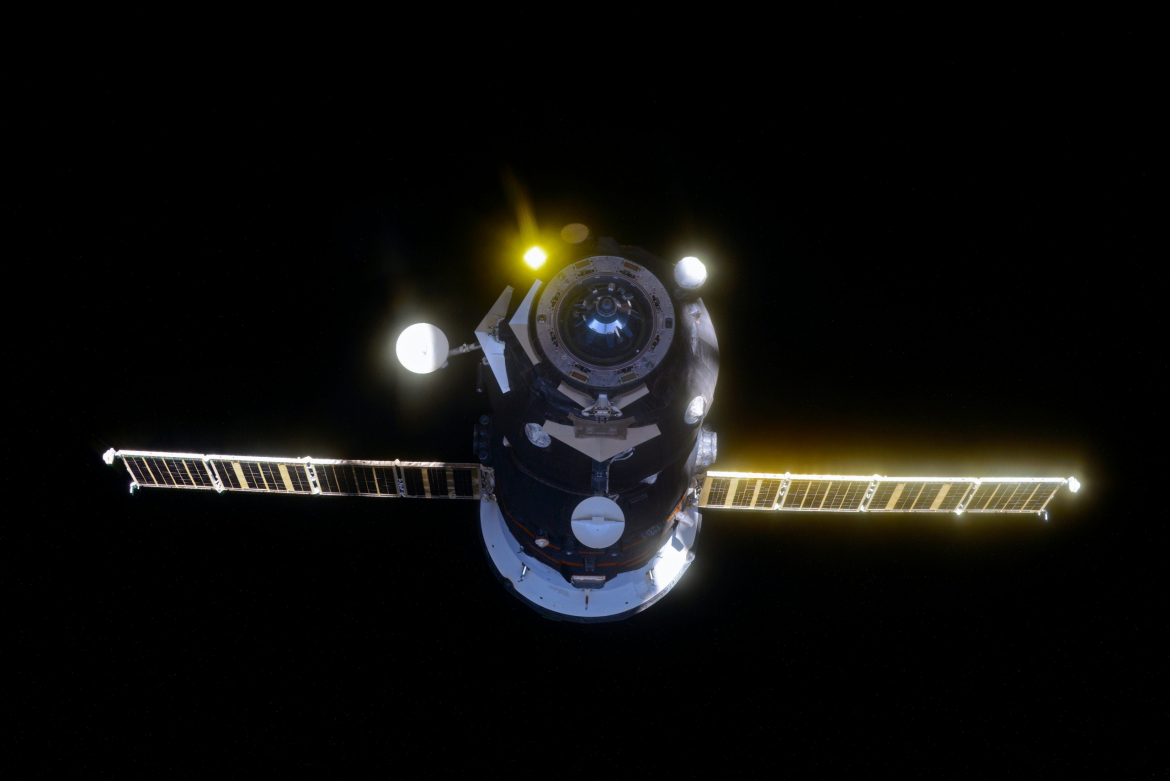 The Russian Federation’s state-owned space corporation, Roscosmos, has launched their latest resupply mission to the International Space Station.  The supply craft, Progress MS-15, lifted off at 14:26:22 UTC, or 10:26:22 EDT, on Thursday, 23 July from Site No. 31/6 at the Baikonur Cosmodrome, Kazakhstan.

The craft arrived and docked to the Station via its KURS-NA automated docking system.  However, a software issue created several tense moments and concern as Progress was off course and deviating from the flight plan while Russian controllers and crew did not hit the abort button to send the craft away from the Station.

The Progress MS-15 spacecraft will resupply the Expedition 63 crew with supplies and consumables as well as deliver new equipment to help trace the source of elevated benzene levels in the Station’s air.

The real-time air quality monitoring equipment launching on Progress MS-15 will “continue work to isolate the source causing higher than normal benzene levels in the Station’s atmosphere,” said a NASA spokesperson.  “Additional air filtering is already in place, and all detected levels have remained well below the threshold for any impact to crew.”

Additional items on board include shoes for one NASA crew member, KTOs (solid waste containers for toilets), EDVs (urine containers), one pretreat tank for the water recycling and potable water for the Russian segment of the Station, and two months worth of food.

Prior to the arrival of Progress MS-15, the Station has enough consumables/commodities to support a full crew compliment of six until the first quarter of 2021 — with food being the limiting commodity.  All consumables other than food are stocked to last (including reserves) until “at least the first half of 2021 if not farther,” noted NASA.

Getting Soyuz and Progress ready for launch

In April 2020, the Soyuz 2.1a rocket segments designated for the mission were offloaded from railway cars after arriving at Baikonur.  The Blok-A first stage arrived in two pieces (as usual), the liquid oxygen section along with the RP-1 kerosene tank and RD-108A engine. 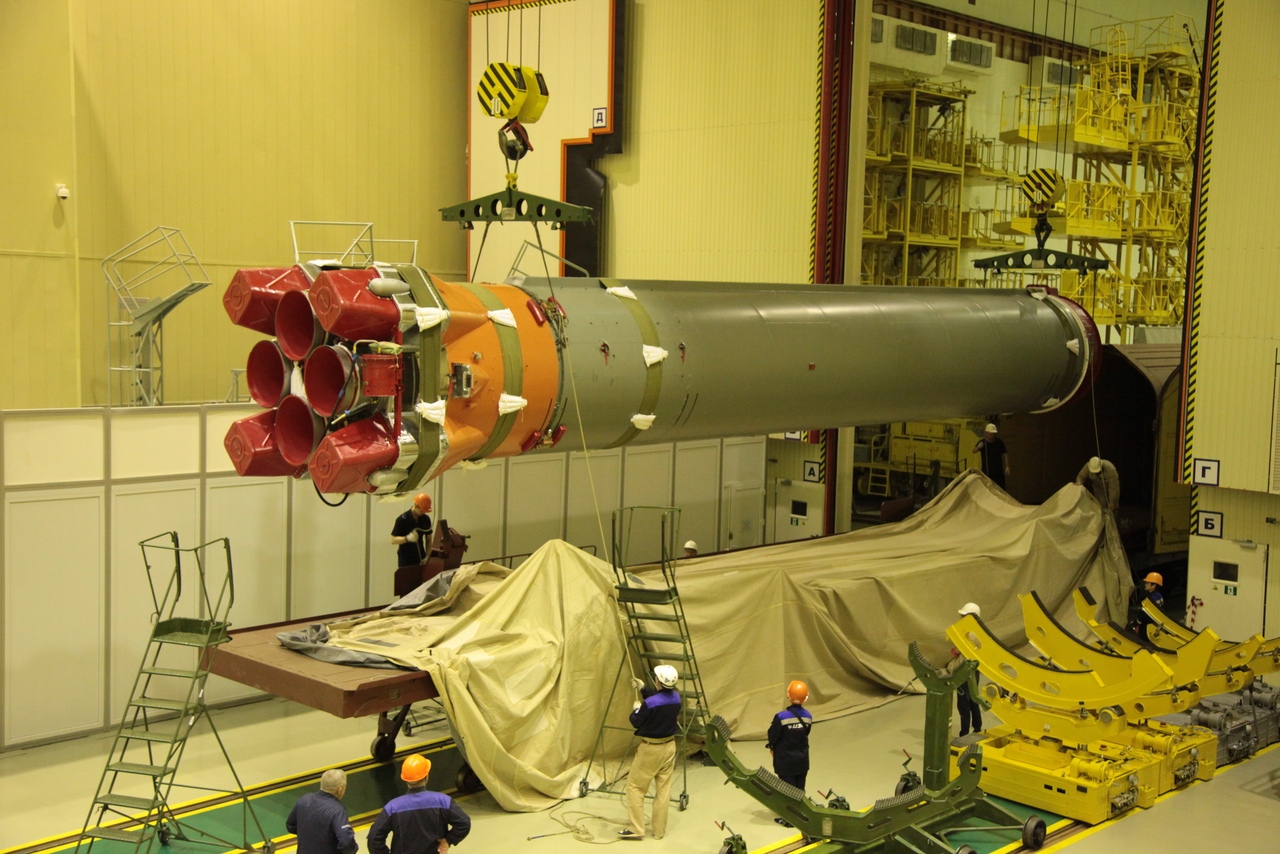 Meanwhile, at the assembly and testing complex, engineers from RSC Energia began powering up Progress MS-15 to prepare it for electrical, solar panel, and squid circuit checkouts to record the overall health of the craft.

The spacecraft then underwent testing inside the anechoic chamber until 23 June.  The chamber’s radar absorbing walls simulate the environment in space.  During the test, the Kurs-NA system was tested.

Kurs-NA is the updated version of the Kurs navigation system that was originally developed in the 1980s to replace the Igla system which was mainly used on the Salyut stations.  Soyuz TM-2 was the first spacecraft to use the Kurs system when cosmonauts Yuri Romanenko and Aleksandr Laveykin arrived at the Mir space station in 1987 for Mir EO-2.

On 30 June, RSC Energia announced that Progress MS-15 had completed leak tests at the vacuum chamber located at site 254.  Such vacuum tests are standard for both Progress and Soyuz spacecraft prior to launch vehicle integration.

In early July, the two sections of the Blok-A core stage on the Soyuz 2.1a rocket were bolted together and integrated.

On 6 July, Progress MS-15’s solar panels were once again tested, this time functionally, by shining powerful lights on them in the deployed position to validate their ability to generate electricity.

Specialists completed the general assembly of the Soyuz-2.1a rocket with the #ProgressMS15 spacecraft.

Two days later, specialists from Yuzhny (responsible for ground infrastructure) began preparations for launch at Site No. 31/6, which since Soyuz MS-15 in 2019 has been the sole operational Soyuz pad at the Baikonur Cosmodrome while the future of Site No. 1/5 remains in limbo.

On 13 July, Progress MS-15 was installed on the dynamic stand for final integration activities following fueling and filling of the onboard tanks with 420 liters of water and 600 kg of fuel for the Station itself.  While on the dynamic stand, the craft was loaded with all cargo elements.

On 16 July, the spacecraft was encapsulated inside the payload fairing and then loaded into a special railway car and transported to the integration and test facility where the Soyuz 2.1a rocket awaited.

The spacecraft was then integrated to the Blok-I second stage, which was then mated to the rest of the launch vehicle.

The fully integrated Soyuz 2.1a rocket then made the short journey by rail from the integration facility to Site No. 31/6 on 20 July.  Once at the launch pad, Soyuz 2.1a was raised to the vertical position, and the launch gantry towers were raised up to surround it.

Liftoff was timed to exactly 14:26:22 UTC (10:26:22 EDT) on Thursday, 23 July 2020 — the exact second that a liftoff would result in Progress MS-15 being delivered directly into the plane of the Station’s orbit at engine cutoff 8 minutes 46 seconds after launch.

After lifting off, the Soyuz 2.1a performed a pitch and roll maneuver to place itself onto the correct azimuth or compass heading for a launch to deliver it into a 51.6 degree inclination orbit.

The 51.6 degree inclination of the International Space Station’s orbit is directly related to where the Baikonur Cosmodrome is situated from a geopolitical, graphic, and crew rescue standpoint. 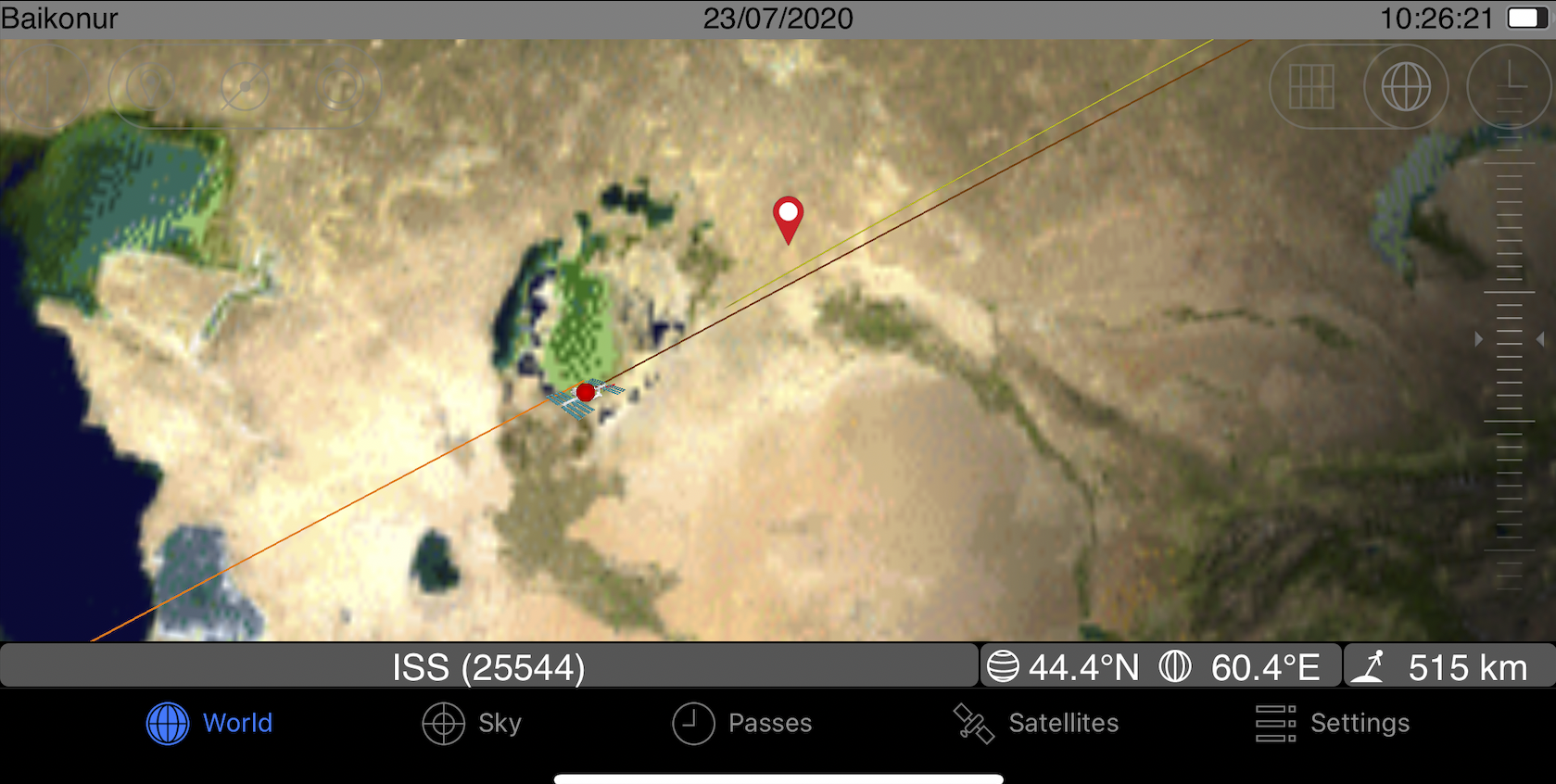 Location of the Station relative to the Baikonur Cosmodrome at Progress MS-15’s launch time on 23 July 2020. (Credit: GoISSWatch app)

Launching due east out of Baikonur would result in overflight of Mongolia and the People’s Republic of China during powered flight.  In an effort to avoid that and to place the rocket’s trajectory on a course that would only overfly Kazakhstan and the Russian Federation, a 51.6 degree inclination was chosen — same as for the Mir space station.

This trajectory for crewed missions also ensures that any In-Flight Abort lands in either Kazakhstan or Russia and not within another country’s borders.

For this launch, after pitching and rolling onto the proper azimuth, the Blok-A first stage and four side-mounted liquid fueled boosters, took the Soyuz 2.1a out of the dense lower atmosphere.  Just after two minutes into flight, the boosters separated and the Blok-A first stage continued firing until 4 minutes 45 seconds into the flight.

The second stage then delivered the Progress MS-15 vehicle into a circular 200 km orbit 8 minutes 46 seconds after liftoff.

From there, Progress MS-15 separated from Blok-I and immediately deployed its solar arrays and communication antennas, allowing the craft to communicate with the ground tracking station at the Vostochny Cosmodrome in eastern Russia.  That data allowed flight controllers in Mission Control Moscow to confirm the craft’s orbit and clear it for a super fast-track, two orbit, 3 hour 21 minute rendezvous with the International Space Station. 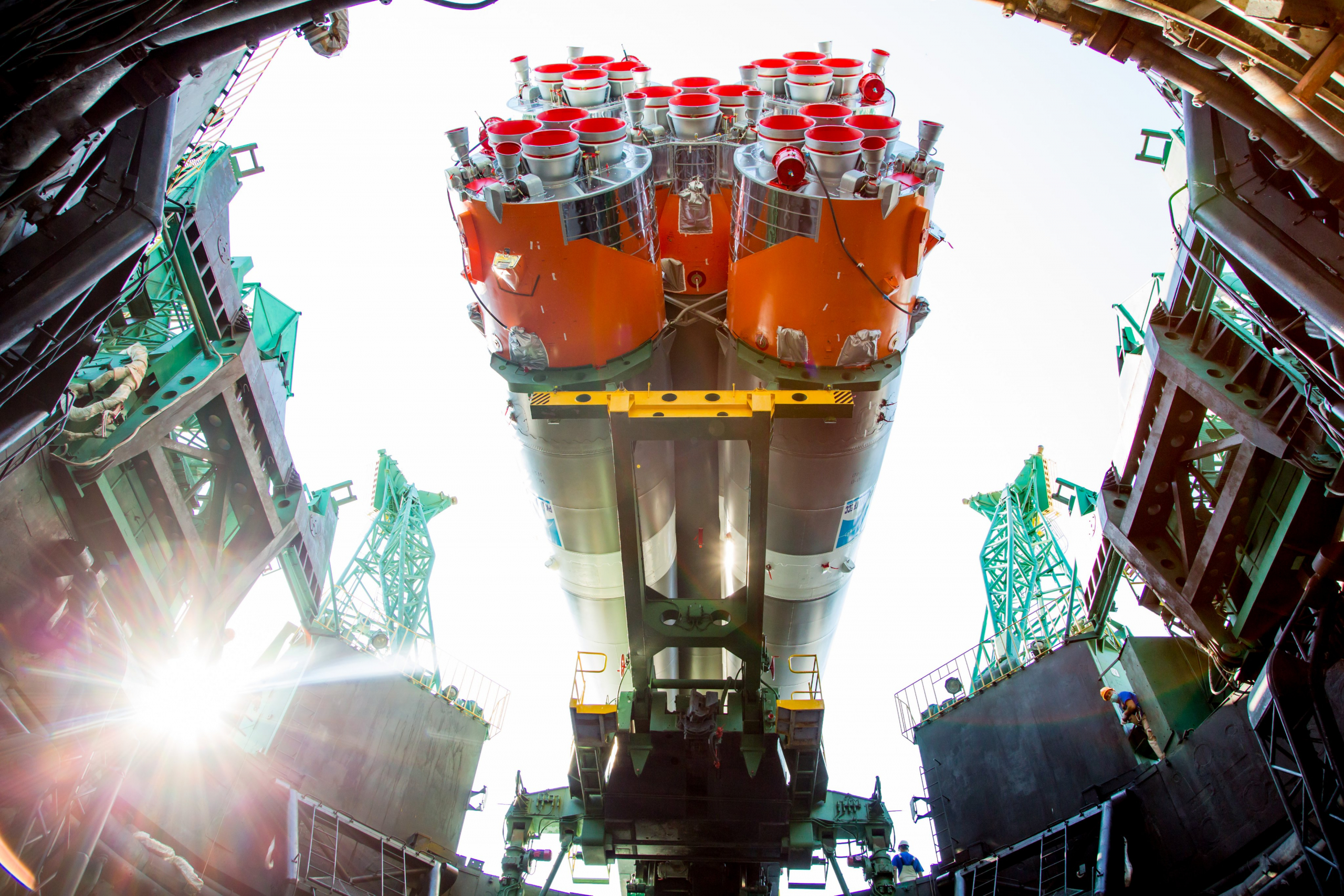 The Soyuz 2.1a rocket with Progress MS-15 arrives at Site No. 31/6’s launch stand at Baikonur. (Credit: Roscosmos)

While the docking was successful about one minute ahead of the timeline, a software malfunction caused Progress MS-15 to deviate from its planned flight trajectory and wobble wildly just 3 to 5 meters away from the Station.

Something that will need an explanation is why Roscosmos and the Russian crewmembers appeared to not follow safety guidelines and abort the vehicle away from the Station and why no one attempted to take manual control of Progress for its docking, again per safety guidelines.

Russia has been quite critical of SpaceX’s Crew Dragon and Boeing’s Starliner vehicles, saying their software and overall designs are not yet safe enough to commit to flying Russians aboard, yet Roscosmos itself has now encountered two serious automated software docking issues in less than a year.

Despite the drama and safety questions raised, Progress MS-15 did manage to perform an automated docking to the Pirs docking compartment.

Whoa, this one is going wrong. Standing by to take over on manual. Will be the TORU system. pic.twitter.com/co9sJikW9R

After relative motion between the two vehicles dampened out, a series of hooks and latches were driven to hard mate Progress MS-15 to Pirs.

Under the current plan, at the end of its mission in a several months time, Progress MS-15 will not perform the standard undocking and fly away from the International Space Station.

Instead, the entire Pirs docking compartment will be removed from the Station, with Progress MS-15 acting as a tug to pull that element safely away from the complex and down into Earth’s atmosphere for a destructive re-entry.

The Pirs docking compartment needs to be removed from the Station to make room for Russia’s long-awaited Nauka science laboratory, which will be berthed to the same location to which Pirs is currently mated.

Nauka itself is equipped with a docking port to take the place of Pirs for future Progress and Soyuz missions.

This current plan rests entirely on the Nauka module’s launch schedule and is subject to change per Roscosmos timelines, plans, and requirements.