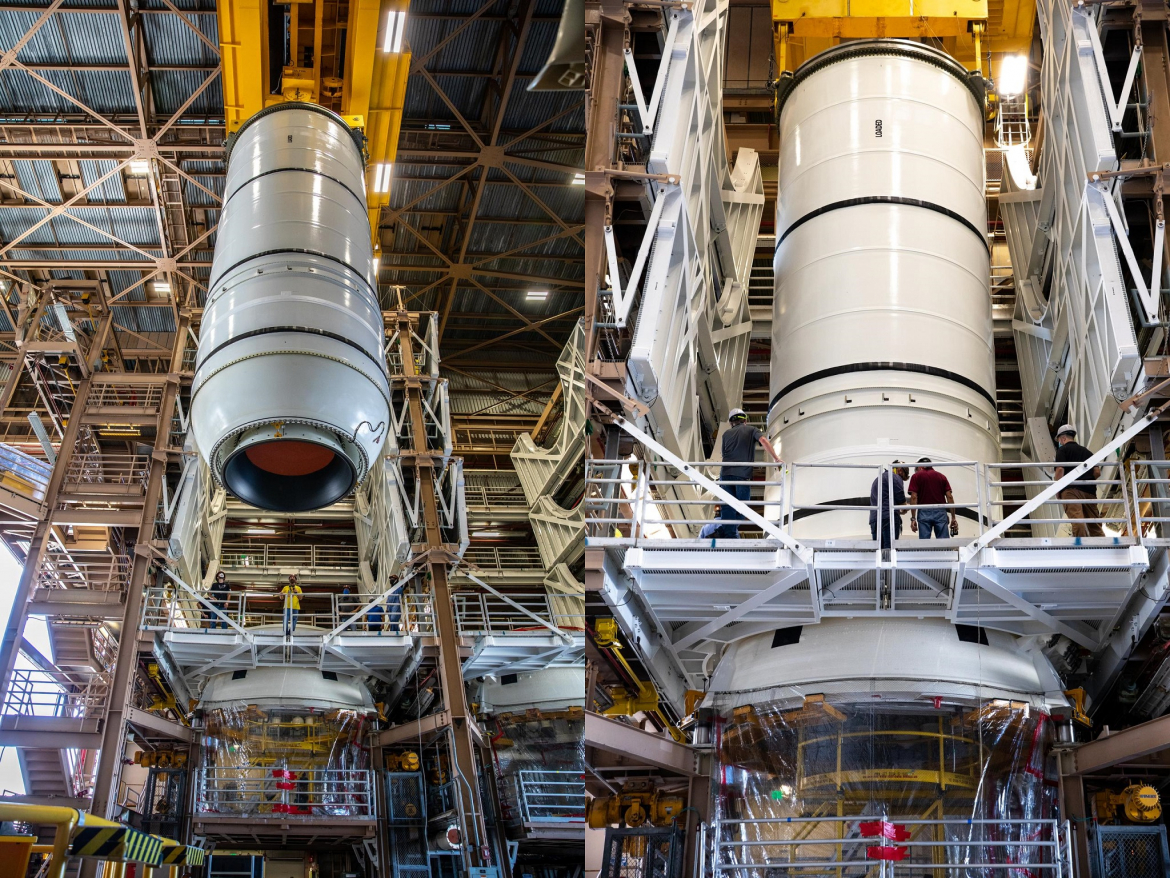 The connection of two of the major elements of the right-hand aft booster assembly continues preparations of Northrop Grumman booster hardware for the first SLS launch tentatively scheduled for late next year.

The two aft motors and two aft skirts were delivered to the Rotation, Processing and Surge Facility (RPSF) in mid-June to begin readying them for eventual stacking on Mobile Launcher-1 in the Vehicle Assembly Building at the Kennedy Space Center later this year. Following rail transportation from Utah, Jacobs and Exploration Ground Systems (EGS) removed the aft motors from their railcars, rotated them to a vertical orientation, and mated them to the aft skirts in build up stands in the RPSF.

Nozzle extensions, also known as exit cones, and other hardware will be added to the aft motor and skirt to complete build up of the aft booster assemblies so they are ready to stack by the end of the Summer. Roll from the RPSF to the Vehicle Assembly Building (VAB) for stacking will then wait until after the Core Stage hot-fire test at the Stennis Space Center in Mississippi, tentatively scheduled for this Autumn.

For build-up, the right-hand aft solid rocket motor segment for Artemis 1 was lifted into one of the build up stands where the bottom case of the aft segment was mated to the top of the aft skirt. The lift and mate on June 24 followed a week of initial offloading and receiving inspections after arrival of the ten solid rocket motor segments by train from their production facility in Promontory, Utah.

SLS Booster prime contractor Northrop Grumman delivered almost all the Artemis 1 Solid Rocket Booster (SRB) hardware to EGS in mid-June, with the two completed aft skirts transported from the Booster Fabrication Facility at KSC to the RPSF a few days before the motor segment train arrived in Florida.

The two SRB exit cones were delivered to EGS late in 2019; all that remains to be delivered for the boosters are the forward assemblies, which are nearly complete and being closed out for handover in the Booster Fabrication Facility.

The ten motor segments compose the two, five-segment solid rocket motors (RSRMV) at the heart of the SLS Boosters. The RSRMV is an evolution of the Space Shuttle Reusable Solid Rocket Motor (RSRM) design; originally selected to be the first-stage of the Constellation Program’s Ares I Crew Launch Vehicle, after Constellation was cancelled the design was adopted for SLS in 2011. The Shuttle RSRM had four segments: the forward, forward-center, aft-center, and aft segments. The RSRMV adds an additional center-center segment in the middle of the motor.

Processing of the boosters in the RPSF began with the two aft segments. The two boosters are being assembled by combining the ten motors with the two sets of aft skirts, exit cones, forward assemblies, and other hardware.

Most of the assembly is done during stacking operations on the Mobile Launcher in the VAB, but several of the major booster elements are part of the aft booster assemblies, and those are integrated in the RPSF as a prerequisite to start stacking. 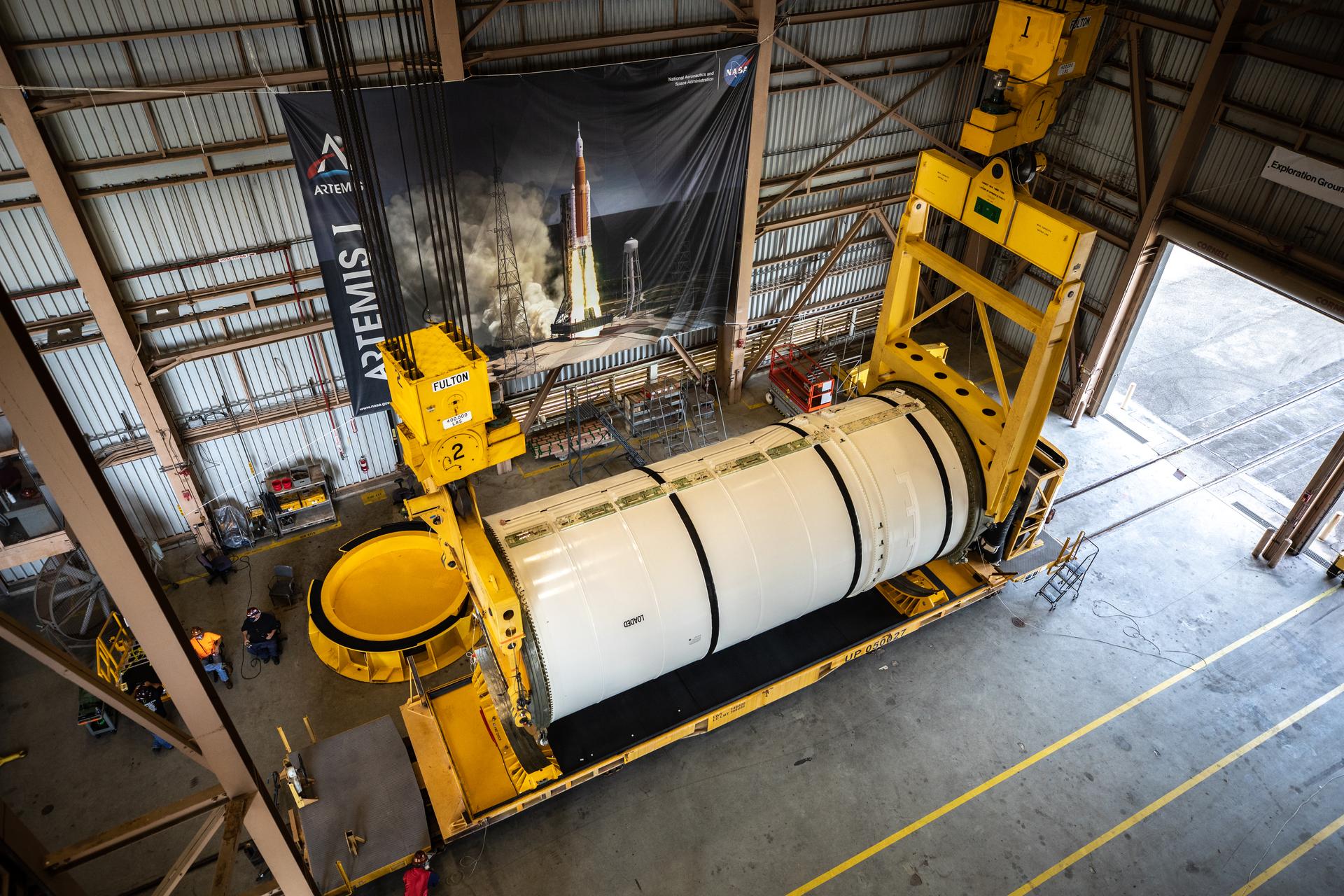 (Photo Caption: Two overhead cranes in the Rotation/Processing Building of the RPSF begin lifting the right aft motor segment off its transportation railcar on June 19. The train from Utah with all ten Artemis 1 solid rocket motor segments arrived in Titusville on June 12 and the segment cars were moved onto KSC on June 15. Processing started with the right aft motor car the next day.)

“We preposition the aft skirt; we then mate the aft segment to the skirt, and we go through a series of operations to make it the aft booster assembly by installing things like the Core Stage attach ring. We have some [Development Flight Instrumentation] that we need to install, we have cable harnesses we need to run, thermal curtain installation on the bottom of the aft skirt,” Jeffrey Angermeier, EGS Flow Director, explained in a recent interview.

The RPSF is composed of four buildings in an area just north of the VAB outside the crawler-transporter tracks. The work to prep the segments for stacking is performed in the Rotation/Processing Building. “If you think about the footprint in the rotation building, there are kind of four permanent structures that we have,” Angermeier explained.

In addition to the Rotation/Processing Building, the RPSF includes two Surge buildings, or garages, for storing motor segments ready for stacking, along with a support building.

Following arrival of the motor segment train, the cars with the two aft segments were detached and moved to the Rotation/Processing Building for Jacobs and EGS to begin their work. The two aft booster assemblies are staged in the build up stands there, with the aft skirts set up there first.

While the aft skirts were being staged in the build up stands, the aft motor segment railcars were rolled into the Rotation/Processing Building one at a time for offloading. The clamshell shipping cover was removed from the railcar and then the covers bolted onto both ends of the segment were removed. 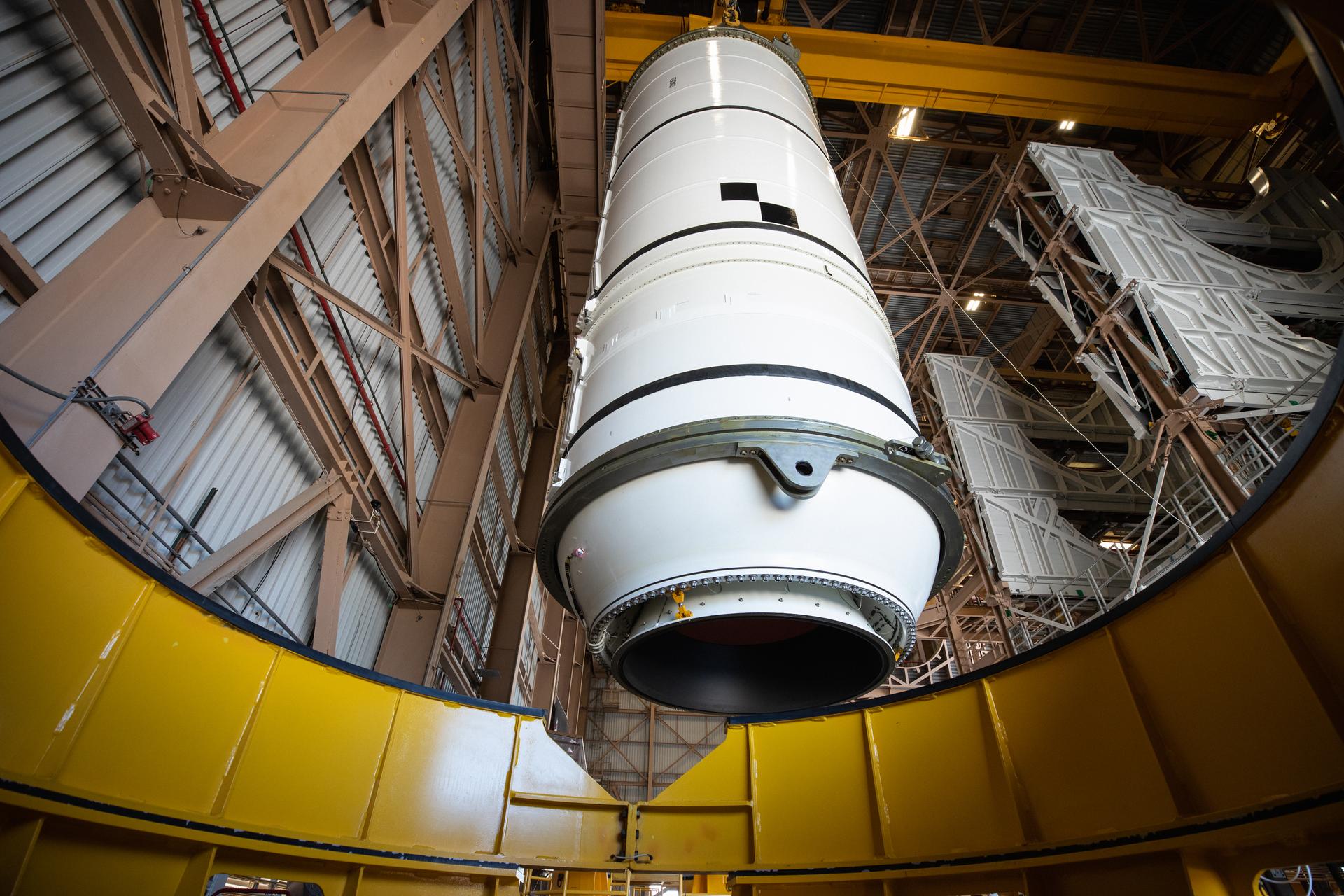 (Photo Caption: The right aft motor segment is moved towards its inspection stand pedestals on June 23. The segment was first rotated from its horizontal orientation for shipping to vertical for processing at KSC.)

Following initial inspections, two overhead cranes were attached to the forward and aft ends of the motor for the breakover operation, where the segment was offloaded from the railcar and rotated. “After you lift it off of the railcar, you go from horizontal to vertical,” Angermeier said.

“Then you’ll position the segment on top of a pedestal. We have a pedestal that is used for the aft motor segments, then we have pedestals that we can use for all the other segments.”

In addition to connecting the aft motor, aft skirt, and exit cone, a lot of work goes into integrating electrical, mechanical, and thermal protection systems for the aft booster assembly.

Angermeier further outlined some of the work after the aft motor segment is attached to the aft skirt. “One of the first things that we do is we will install the aft exit cone,” he said. “We received one in November and one in December of 2019, so they’ve been here ready.”

“We will attach that exit cone, we’ll do a leak check, and then we’ll close out the joint and we’ll do things like if there’s any painting of bare metal and there’s a nozzle sealant application and the cure we have to do with that.” The aft skirt also houses the booster’s hydraulic thrust vector control (TVC) system, and the two hydraulic actuators will also be attached to the full-length nozzle.

“Once we get done with that, then we get into the Core Stage Attach ring installation,” he continued. “That is the structural ring that goes around that aft motor segment that we will use to attach to the Core Stage.” 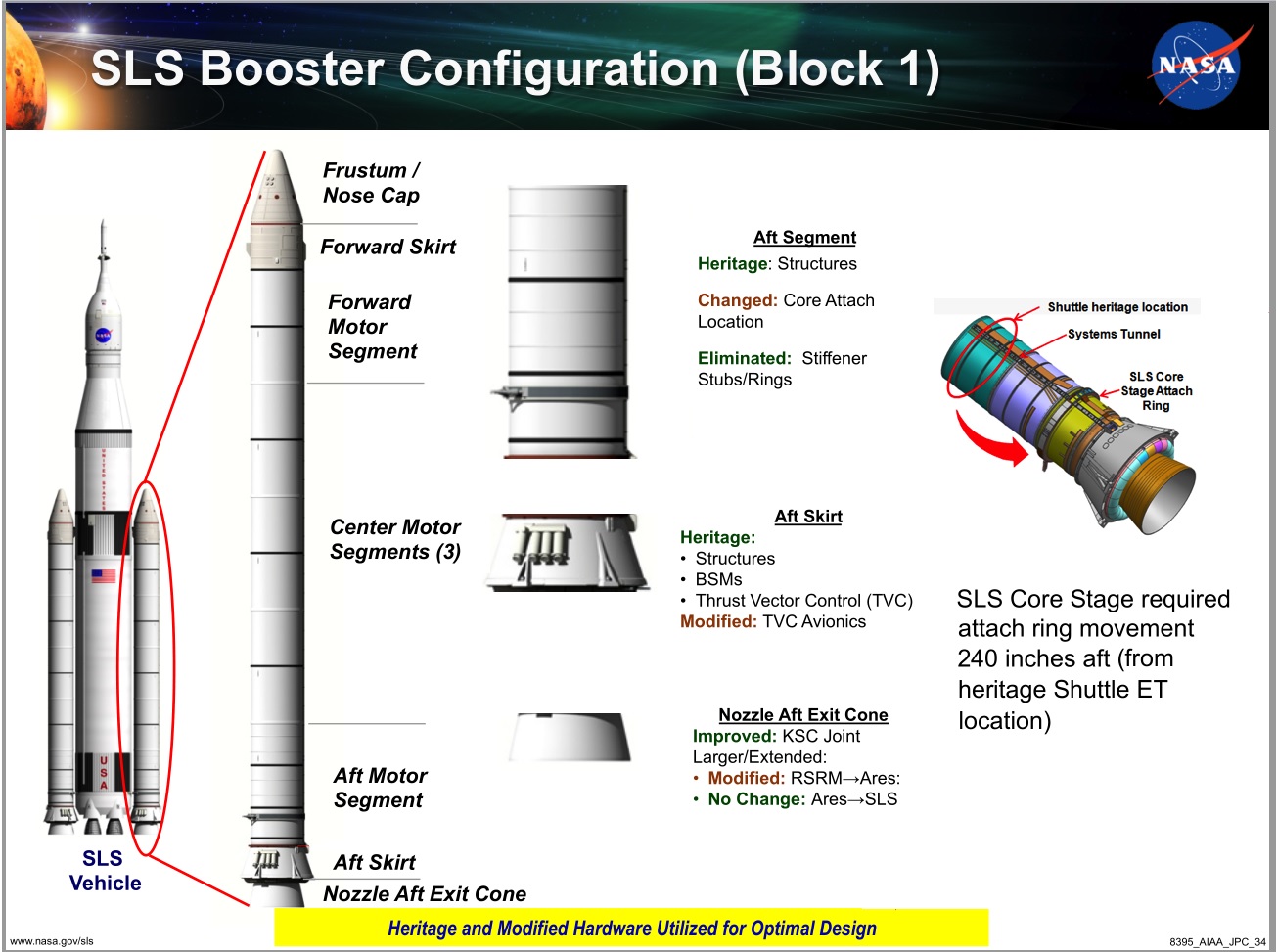 (Photo Caption: Composite slide graphics from a NASA presentation showing the SLS Booster configuration and aft booster assembly elements.  Some of the changes for the aft assembly elements made from the heritage Shuttle hardware and design to Ares I to SLS are also highlighted.)

“What we will do is we will install the struts; there’s three struts on each side. You have the upper, the lower, and the diagonal struts, so there will be a total of six, three per each booster. And that’s how you’ll attach the boosters to the lower part of the Core Stage.”

Each of the two SLS Boosters attach in two locations to the Core Stage. At their aft end, they are bolted to a structural ring built into the barrel of the Core Stage’s engine section; at their forward end they attach to either side of a thrust beam that runs through the middle of the intertank.

In contrast to the aft assembly for the four-segment Shuttle boosters, where the attach ring was located at the top of the motor segment, for the SLS five-segment boosters, the ring is located twenty feet lower on the aft segment, closer to the aft skirt. The inline SLS configuration has the nozzles for the liquid engines and solid motors close together compared to the Shuttle orbiter that was side-mounted farther above the exit plane of the boosters.

“In parallel with that, we’re working underneath installing the thermal curtain.  Also on the bottom part of the aft skirt, we have our ground umbilical plate that provides all the electrical feed from the ground up through the booster. We install the ground plate up to the flight plate; we install that in the Rotation building.”

In addition to connecting electrical cabling for operational and development flight instrumentation laid out all over this first flight vehicle, Angermeier noted that the ordnance lines to explosively separate the boosters from the Core Stage during launch will also be connected.