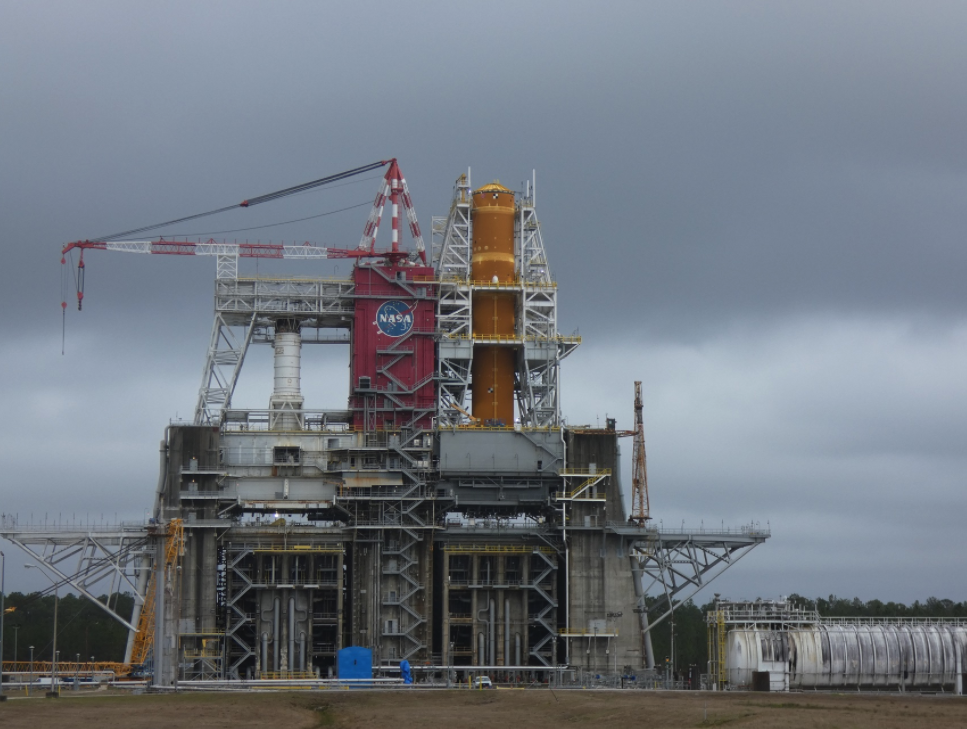 Boeing is getting ready to conduct the next phase of the Green Run test campaign for NASA’s first Space Launch System (SLS) Core Stage. The second and third test cases were recently completed in the B-2 Test Stand at the NASA’s Stennis Space Center in Mississippi.

The NASA and contractor teams running the Green Run campaign continue expanding integrated system checkouts, bringing up all previously verified equipment in the next phase of tests that will validate the stage’s propulsion and mechanical systems.

Health checks of computer systems on the new rocket stage and in the refurbished test complex were first run in late June, followed by a verification of safing routines last week. The computer health tests and ground system command and control safety verifications were the second phase of the Green Run campaign that began with arrival of the first Core Stage at the B Test Complex in January.

A total of eight test cases will be performed over the course of this year, iteratively building up to the seventh and eighth tests: the SLS Program’s first propellant loading of a Core Stage followed by an inaugural eight-minute, flight-duration firing while held down in the stand.

NASA's Green Run test series for the SLS rocket's core stage is an important step toward safely launching SLS and @NASA_Orion beyond Earth's orbit forward to the Moon for the agency’s #Artemis program. LEARN MORE about the test campaign >> https://t.co/AUlshoRg5s

Test case three was completed in early July, which ran through safing routines and their primary and emergency command paths.

“There’s a series of safeguards we have that we need to test ,and we call this our safing checks,” John Cipoletti, Launch Team Lead and Green Run Deputy for Boeing, said in February. “There’s a way for the Stage Controller to command the vehicle to shut down, and there’s two paths for that.”

Boeing’s Stage Controller is a computer system that conducts the Green Run tests of the Core Stage. It interfaces with the stage flight computers and software directly and provides interfaces to the test control team for the systems of the stage and the test stand.

“We’re going to make sure both paths work. And then there’s an emergency command that we can send from the stand through the vehicle if we lose communication with the vehicle through its downlink and downlist and uplink, and that’s a hard line. And we’ll check to make sure that that hard line works so that we have all of our emergency safing in place. And that’s our safing check procedure.”

Test cases two and three were the first performed with Core Stage systems powered up in the stand. The test team at the Stennis Space Center in southern Mississippi was kept away from work for two months beginning in mid-March due to the COVID-19 pandemic.

A deliberate, phased return of essential personnel began in mid-May to complete preparations for the second and third test cases. “Prior to the COVID shutdown, we had gotten within five days of finishing up that amount of work,” Mark Nappi, Boeing Green Run Test Manager, said in late June. “Then of course we had the shutdown. We were shut down for nearly sixty days, came back and finished up that little bit of work, and then got into a place where we could start powering up.”

Another week was lost during power up test preparations when Tropical Storm Cristobal passed over the area in early June, forcing a work stoppage at Stennis.

From here, the plan is to continue with a normal pace of work to finish the Green Run campaign this year. 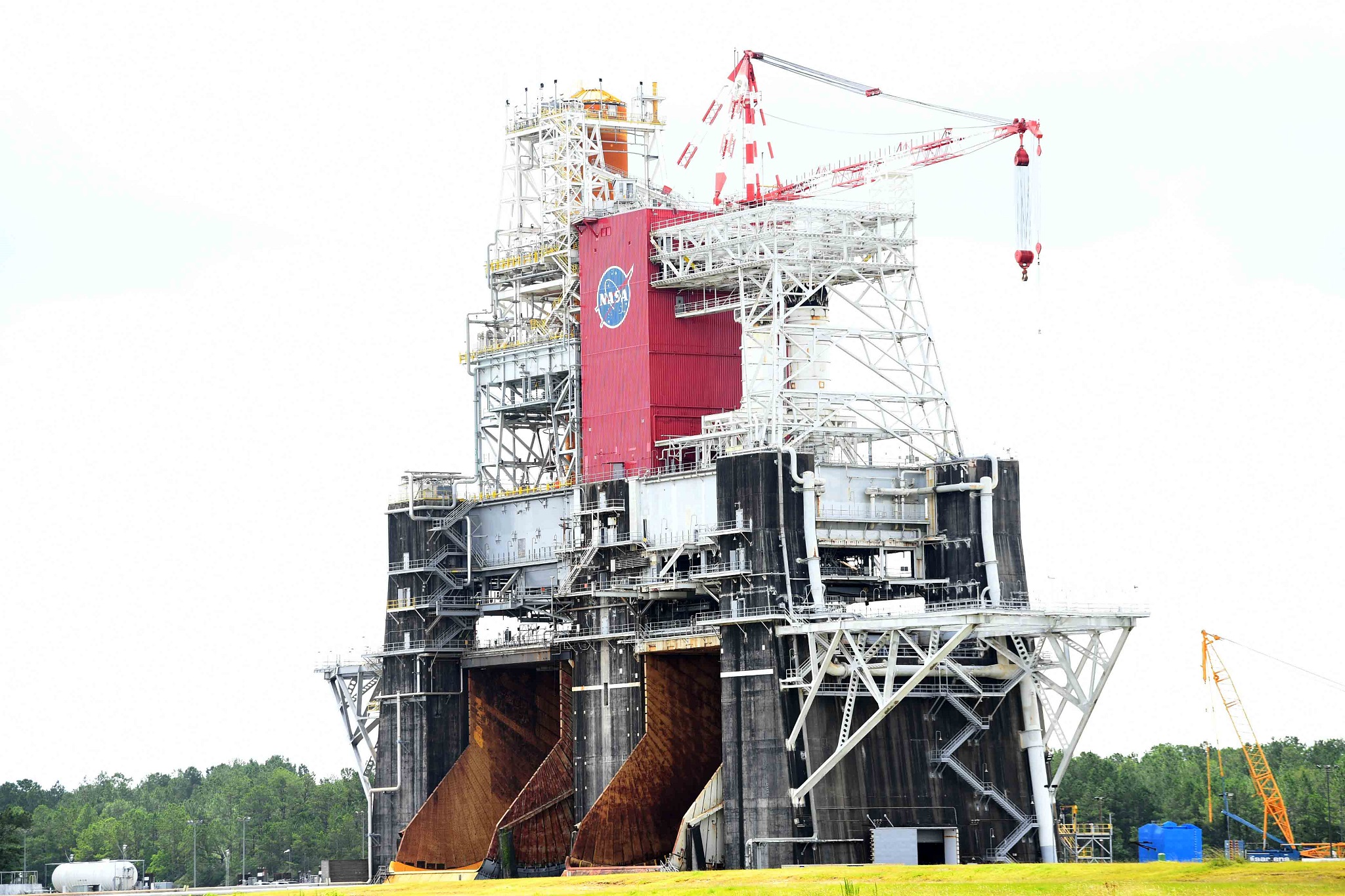 B Test Stand at Stennis Space Center on June 23; B-1 position foreground, B-2 background. Credit: NASA/SSC.

“We re-forecasted our schedule based on coming back to work on May 14th, and then taking thirty days to get to power up, and then being able to run somewhat nominally. And we ended up with a Wet Dress [Rehearsal] at around the end of September and then the hot-fire would be around the second week or so of October.”

The Wet Dress Rehearsal (WDR) is test case seven, a countdown tanking test of the stage. During the countdown for the WDR, the stage will be loaded with liquid oxygen and liquid hydrogen propellants, a first for the SLS program.

The hot-fire is test case eight; at the end of the hot-fire countdown, the stage will be test-fired for a planned eight minutes to culminate the campaign.

The COVID-19 situation around the United States continues to keep most of NASA’s workforce away from their workplaces. To continue work with new safety protocols, Boeing reduced the size of the team of essential personnel working on site at the space center, with the remainder supporting remotely.

“Back in the December/January time-frame we were going to be maxing out at about three-hundred fifty to four-hundred people, and that’s about where we were when we started getting close to test case two back in March,” Nappi noted. “Since we’ve had the stand down, we restricted the number of people and really have gotten every belly button approved to come in through senior NASA and Boeing management.”

“We’ve been very careful in calling them essential personnel. We’ve got about two-hundred forty people right now.” Social distancing is being practiced where possible and personal protective equipment (PPE) is used.

“Going into the engine section for example, you can barely maintain six feet,” Nappi said. “It’s just not enough room in there, and if you’re working on a component, two people have to be very close to each other. So we’ve instituted all of the PPE needed once you get within six feet.”

“We are allowing the normal [personnel] load for confined spaces inside all of our volumes, and when they can’t maintain six feet, [they] wear PPE and we do a lot of cleaning. It does cut down a little bit on your productivity when you’re cleaning so often, but the team has gotten that pretty standard.”

Some of the supporting personnel is teleworking, which makes keeping everyone on the same proverbial page more difficult. “That’s probably our biggest frustration is not being able to be more personal with some of the meetings that we conduct; however, we do have all of the normal teleworking capabilities at our fingertips,” Nappi said.

“At this point we’ve been able to maintain our schedule and get the responses that we need, it just takes a little longer.”

While the team is split into shifts working around the clock, some extra time is required to maintain the necessary cleaning protocols. “The way we do shifting right now is that we have our team come in early, they work to a certain point, they stop, they clean, there’s a half hour break, the next shift comes in, they clean and then they start work,” Nappi explained. 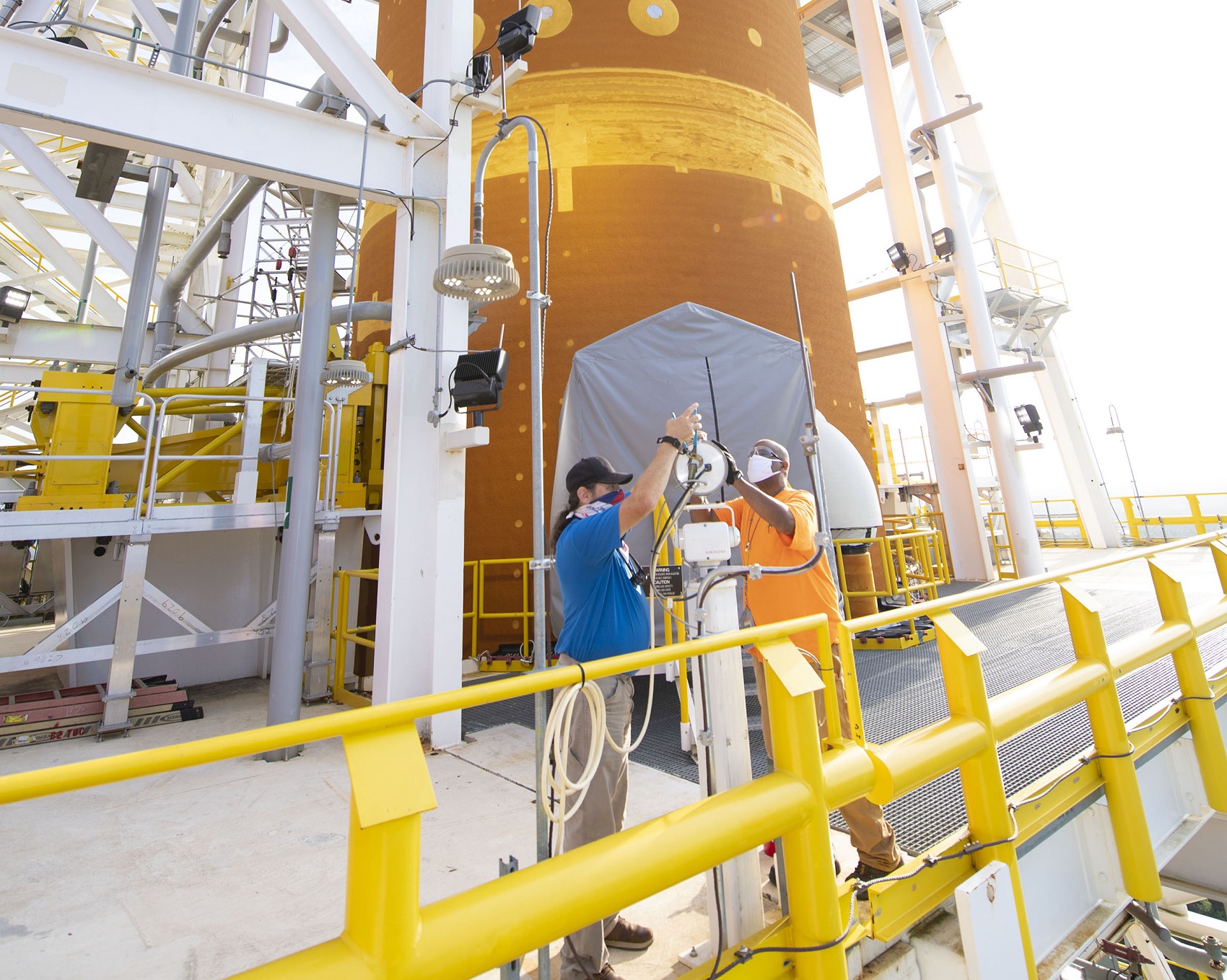 “So we have not adjusted our schedules for any of that. We’ve said we’re going to maintain our schedules, and we may be working a few more hours to account for it ,but there have been no major disruptions schedule-wise yet. We’re [working] 24/7 with the exception of some critical skills. We have to closely watch their hours and if need be give the team time off.”

“There’s these bars that we lay into the schedule to account for that. And yes, that schedule still has those bars laid in. And I will tell you that we are eating it up as we go. We are very close to our predictions.”

The eight test cases in the Green Run campaign can be divided into phases, with the phases and the individual tests building on each other. Over the course of the campaign, all the systems on the stage and the test stand will be iteratively activated, and the tests will verify their operation and inter-operation.

The first phase was mostly preparation for powered system checkouts, opening with the modal test.

At the time, there was one left over production task to complete on the stage and verification and validation (V&V) testing of the Stage Controller ground computer system was still being performed offsite. A modal test of the dormant stage was performed on January 30 shortly after the stage was initially bolted into the stand.

After test instrumentation dotting the outside of the stage was connected to a data acquisition system, the B Test Stand derrick crane lifted the stage several inches off the stand’s hold downs. With the stage suspended on the crane, a Boeing technician used a hammer to ring the structure, hitting the yellow “lift spider” fixture attached to the top of the stage.

This generated data on the resonant frequencies of the structure of the essentially completed stage. Similar tests were performed on the lift spider and individual Core Stage structural elements, and a future Integrated Modal Test will be performed on the Artemis 1 vehicle after it is assembled at its Kennedy Space Center launch site.

The data is used to help refine analytical modeling of how the vehicle structure resonates in flight, which is used as a part of the rocket’s guidance software to manage navigation and loads.

After this, the rest of first phase of the campaign focused on connecting the stage into the stand infrastructure. Fixed platforms were lowered around the stage and internal access kits were installed inside to finish securing the liquid hydrogen (LH2) propellant lines in the engine section that run from the bottom of the stage’s LH2 tank to the inlets of all four RS-25 engines and that connect up the fill and drain line to allow propellant to be loaded and unloaded through a Tail Service Mast Umbilical (TSMU) on the outside of the engine section. 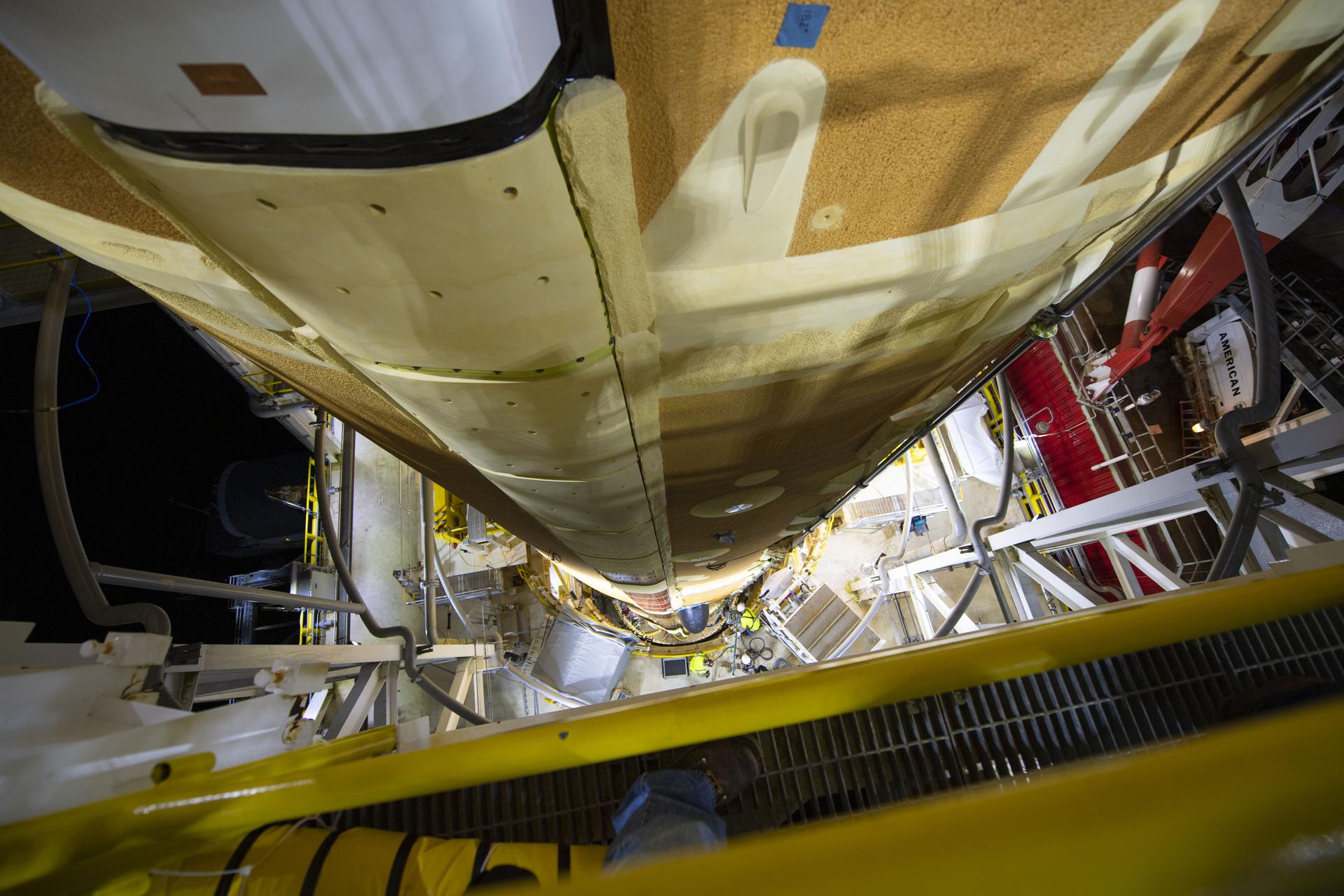 A unique view looking down the Core Stage as it undergoes its Green Run test campaign on the B test stand at Stennis. (Credit: NASA/Stennis Space Center)

With the computer systems up and running and the connections to safely shut down activities if an anomaly requires it now verified, those systems will be used by the test team to command and monitor the upcoming phase of tests.

Test cases four and five will checkout all the propulsion systems on the stage that can be tested in unfueled conditions.

The following phase is the most critical of the test campaign, building to the hot-fire test that is the eighth and last test case.

Separate software updates for the Core Stage flight computers and the Stage Controller systems will be loaded ahead of test case six, a “dry” countdown dress rehearsal.

Maxar making progress with Power and Propulsion Element for Gateway