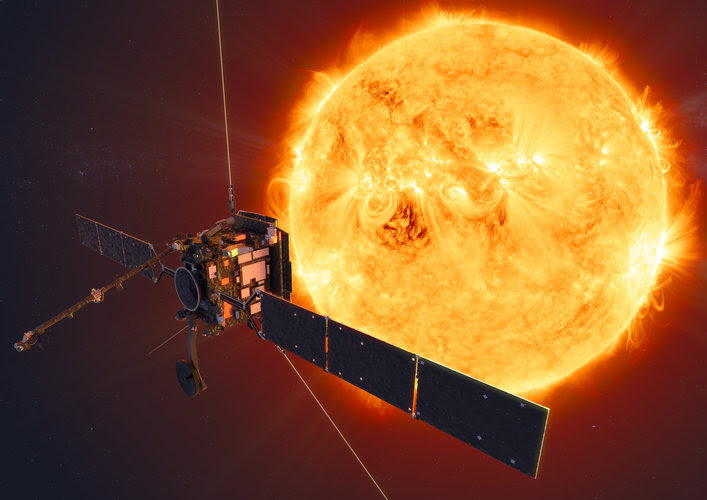 The European Space Agency (ESA) and NASA have released the first pictures and preliminary findings captured by the Solar Orbiter, including intriguing glimpses of “campfires” near the solar surface that could shed new light on one of the biggest solar mysteries scientists are eager to learn more about.

Numerous other scientific areas of intrigue were also revealed to heliophysicists thanks to the images themselves — which are the closest ever taken of the Sun. These areas include the Zodiacal light and the Sun’s magnetic field lines.

While NASA’s Parker Solar Probe is currently much closer to the Sun at 6.11 million kilometers (3.8 million miles) as compared to Solar Orbiter, which is 77 million kilometers (47.84 million miles) away from the Sun, the NASA-ESA joint mission is the nearest probe with sensors facing the Sun and the closest with cameras that can capture our closest star at extreme proximity.

“These amazing images will help scientists piece together the Sun’s atmospheric layers, which is important for understanding how it drives space weather near Earth and throughout the whole solar system,” said Holly Gilbert, NASA project scientist for the mission at NASA’s Goddard Space Flight Center in Greenbelt, Maryland.

The closest pictures revealed a phenomenon that was not observable before, named the “campfires”. They are omnipresent, miniature solar flares near the surface of the Sun.

“We didn’t expect such great results so early,” said Daniel Müller, ESA’s Solar Orbiter project scientist. “These images show that Solar Orbiter is off to an excellent start.” 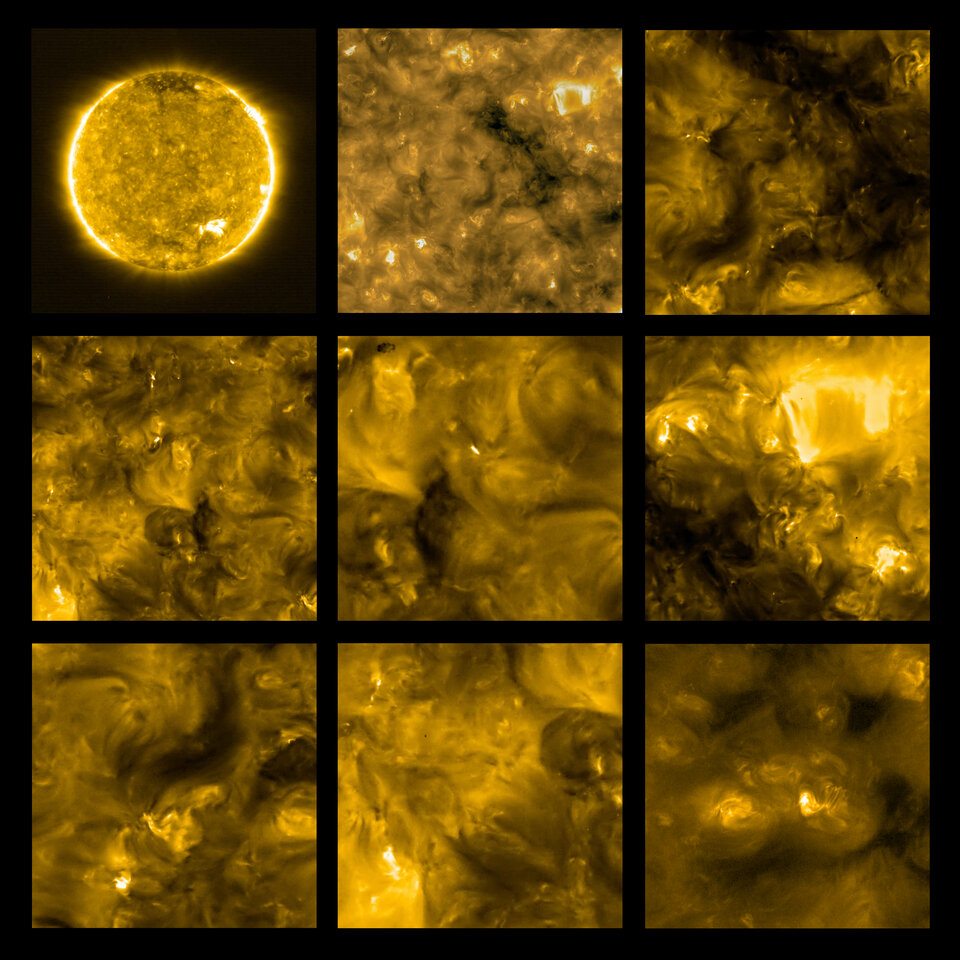 The campfires shown in the image above were captured by the Extreme Ultraviolet Imager (EUI). One of six remote sensing instruments aboard the solar orbiter, it is designed to take high-resolution images of the lower layers of the Sun’s atmosphere, known as the Solar Corona.

The pictures were taken during Solar Orbiter’s first perihelion, the point where the probe is closest to the Sun in its current elliptical orbit.

“The campfires are little relatives of the solar flares that we can observe from Earth, just a million or billion times smaller,” says David Berghmans, the Principal Investigator of EUI at the Royal Observatory of Belgium, Brussels, Belgium. “When looking at the new high-resolution EUI images, they are literally everywhere we look.”

Although it is not known yet whether the campfires are tiny versions of big flares or they are driven by different mechanisms, it is possible these miniature explosions — known as nanoflares — could be contributing to one of the most mysterious phenomena observed on the Sun which has perplexed solar physicists for over 70 years: coronal heating.

“These campfires are totally insignificant each by themselves, but summing up their effect all over the Sun, they might be the dominant contribution to the heating of the solar corona,” says Frédéric Auchère, the Co-Principal Investigator of EUI at the Institut d’Astrophysique Spatiale in Orsay, France.

The solar corona is the outermost layer of the Sun’s atmosphere that extends millions of kilometers into outer space. Its temperature is more than a million degrees Celsius, which is orders of magnitude hotter than the surface of the Sun, measuring at a mere 5,500℃. 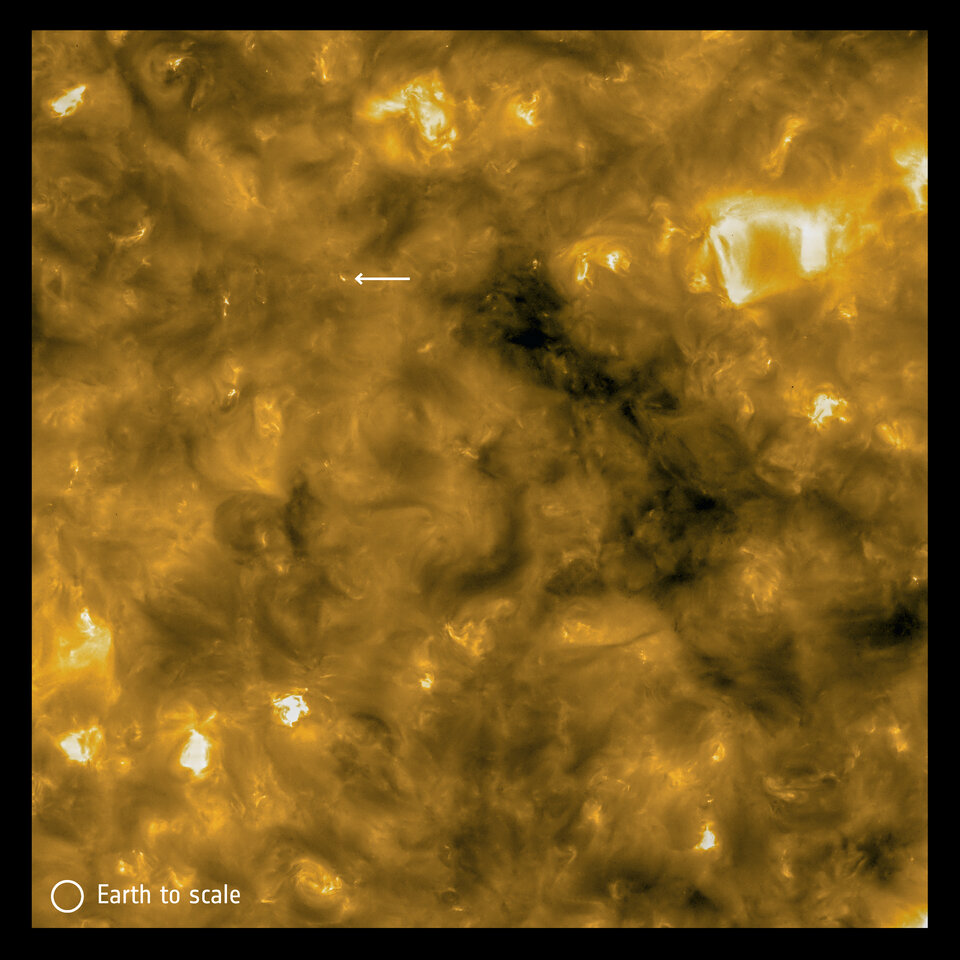 One of the newly found campfires in an image from Solar Orbiter’s Extreme Ultraviolet Imager with respect to the scale provided for the size of Earth. (Credit: Solar Orbiter / EUI Team, ESA & NASA)

This phenomenon is known as coronal heating. Even after decades of studies, the physical mechanisms that heat the corona are not fully understood, but identifying them is considered to be the “holy grail” of heliophysics.

To know for sure, scientists need a more precise measurement of the campfires’ temperature. Fortunately, the Spectral Imaging of the Coronal Environment, the SPICE instrument, also on the Solar Orbiter, does just that. “So we are eagerly waiting for our next data set,” said Frédéric Auchère. “The hope is to detect nanoflares for sure and to quantify their role in coronal heating.”

Another instrument onboard Solar Orbiter, the Solar and Heliospheric Imager (SoloHI), captured images of the Zodiacal light, sunlight reflecting off the interstellar dust. Since it is very faint as compared to the bright face of the Sun, SoloHI had to reduce the Sun’s light to one-trillionth of its original brightness to capture it.

“The images produced such a perfect zodiacal light pattern, so clean,” said Russel Howard of the Naval Research Laboratory in Washington D.C., who leads the SoloHI team. “This gives us a lot of confidence that we will be able to see solar wind structures when we get closer to the Sun.”

NASA and ESA also released preliminary data from the Polar and Helioseismic Imager (PHI) that maps and makes high-resolution measurements of the magnetic field lines on the surface of the Sun — especially the poles.

Designed to monitor active regions on the Sun and areas with strong magnetic fields which can give birth to solar flares, the instrument will transmit what is considered more valuable data later in the mission as Solar Orbiter gradually tilts its orbit to 24 degrees above the plane of the planets, giving it an unprecedented view of the Sun’s poles.

But the data scientists have already gathered from PHI confirms the instrument is working as expected. 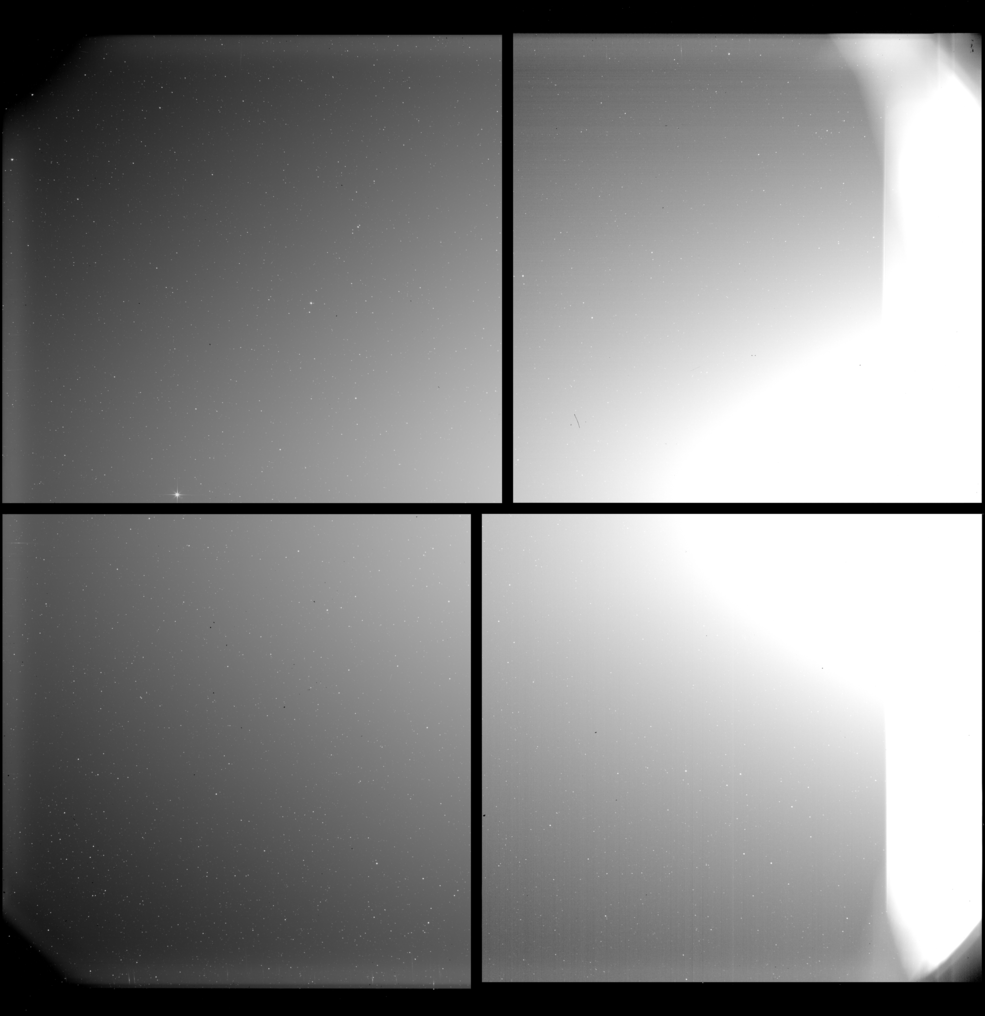 The zodiacal light as seen by SohoHI. Mercury is also visible as a bright dot on the upper-left. The straight bright feature on the very edge of the image is a baffle illuminated by reflections from the spacecraft’s solar array. (Credit: Solar Orbiter / SoloHI Team, ESA & NASA, NRL).

“The magnetic structures we see at the visible surface show that PHI is receiving top-quality data. We’re prepared for great science as more of the Sun’s poles come into view,” said Sami Solanki, PHI’s principal investigator at the Max Planck Institute for Solar System Research in Göttingen, Germany.

One of the instruments, named the Solar Wind Analyzer (SWA), returned an initial data set indicating the presence of heavy ions — such as carbon, silicon, iron — in the solar wind from the inner heliosphere, which is a vast, bubble-like region of space which surrounds and is created by the Sun.

Implications due to COVID

Getting these results was no simple feat, especially during the Coronavirus pandemic, which caused mission control at the European Space Operations center in Darmstadt, Germany, to close down completely for more than a week.

Animation showing the Polarimetric and Helioseismic Imager’s view of the Sun’s surface, observations that allow the investigation into the Sun’s interior via the technique of helioseismology. (Credit: Solar Orbiter / PHI Team, ESA & NASA)

The staff was reduced to a skeleton crew as all but essential personnel worked from home.

“The pandemic required us to perform critical operations remotely — the first time we have ever done that,” said Russel Howard.

Teams were able to bearly complete commissioning, the early phase of technical verification where each sensor is initialized for the first time to make sure it’s working as expected, just in time for Solar Orbiter’s first close solar pass.

Solar Orbiter is a Sun-observing satellite developed by the European Space Agency and operated in cooperation with NASA. It addresses a central question of heliophysics: How does the Sun create and control the constantly changing space environment throughout the solar system?

The probe will conduct detailed observations of the inner heliosphere — a giant bubble of charged particles and magnetic fields blown outward by the Sun that stretches more than twice the distance to Pluto at the nearest edge — and perform close observations of the Sun’s poles, which have never been observed before.

There are 10 sensors aboard the spacecraft, with both access to and protection from the solar environment, for remote sensing and in situ observations.

Solar Orbiter will travel as close as 42 million kilometers (26 million miles) from the Sun, inside the orbit of Mercury, to measure the magnetic fields, waves, energetic particles and plasma escaping the Sun while they are in a pristine state before being modified and mixed in their long journey from our solar system’s star.

The craft was launched on 9 February 2020 aboard United Launch Alliance’s Atlas V 411 rocket from SLC-41 at the Cape Canaveral Air Force Station, Florida.

Using upcoming gravity assists from Venus and Earth, Solar Orbiter will gradually lift itself out of the ecliptic plane of the solar system, ultimately reaching an angle of 24 degrees above the Sun’s equator (33 degrees for the extended mission).