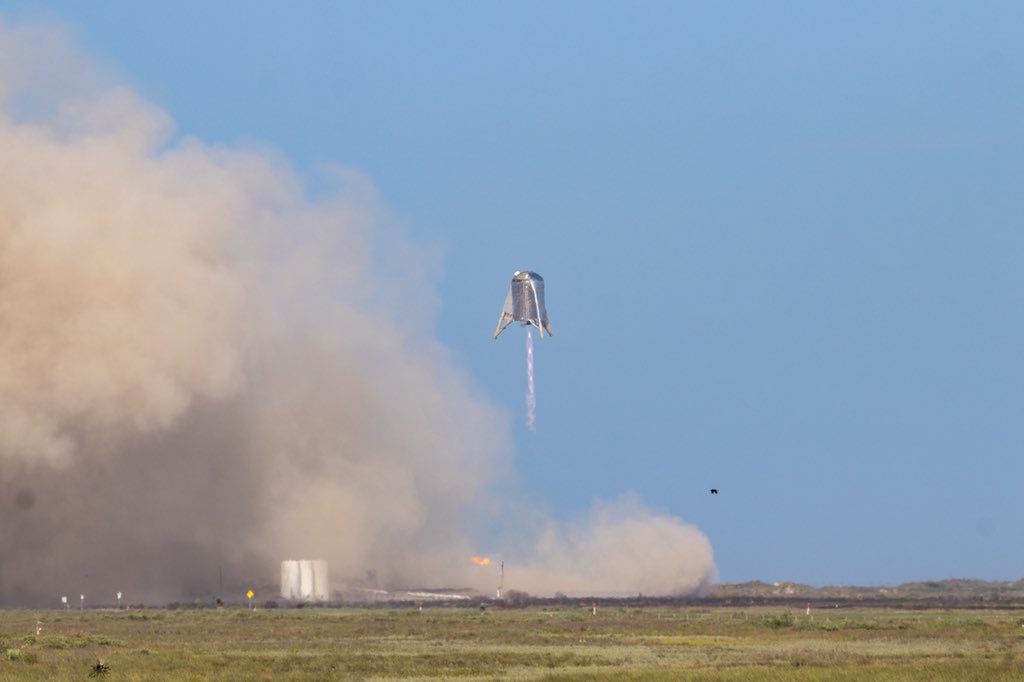 Starhopper was the first SpaceX vehicle to use its new launch facility in Boca Chica — located east of Boca Chica Village and near the beach on the Gulf of Mexico — and served as the first in-flight test article for SpaceX’s next-generation Raptor engine, a full-flow, staged combustion cycle engine that runs on liquid oxygen (LOX) and liquid methane (CH4).

SpaceX currently tests Raptor engines at its test facility in McGregor, Texas, where the company has made great strides past Raptor’s initial teething pains, issues that were not unexpected with the development of one of the world’s first orbital and in-space methalox engines.

Texas is not new to spaceflight. The first privately funded rocket, the Conestoga 1, launched from Matagorda Island, Texas, on Sept 9, 1982. That flight was launched by Space Services Inc. of America (SSIA).

The first mention of a potential SpaceX launch facility in south Texas came in 2012. The company was interested in launching Falcon 9 and Falcon Heavy flights out of the proposed private launch facility.

Preliminary work began at the site in 2014, specifically on the test stand. A mound of dirt for the site was built between 2014 and 2015 before major construction at the stand began in 2018. By then, the Boca Chica launch site was no longer a future Falcon 9/Falcon Heavy site but was instead the future site for the Big “Falcon” Rocket or BFR — now named Starship/Superheavy.

Some of the earliest sections of the tank farm, currently used to fuel SpaceX test vehicles, were built around July 2018. This activity was part of SpaceX’s preparation for Starhopper testing.

The tank farm is part of the ground support equipment for SpaceX testing, with the vertical tanks holding liquid methane (or liquefied natural gas) and the horizontal tanks containing liquid oxygen.

To protect sensitive equipment and the fuel farm from the hazardous operations and potential damage from a failure, a deflector was built out of dirt between it and the test area.

Construction of Starhopper itself began in late-September 2018 and continued until the spring of 2019.  Notably, as with most Boca Chica work, the ship was built outside in the elements, not in a sterile facility.  The first Raptor engine for Starhopper, SN2, arrived at Boca Chica on 11 March 2019 and was installed for testing operations on the 15th of the month.

Preburner testing on Raptor SN2 took place on 25 March, after which a week-long series of wet-dress rehearsals, tank testing, and additional preburner tests occurred before the 3 April static fire the cleared Starhopper and its first Raptor for a one-meter hop test that occurred on 5 April.

For that first hop test, Starhopper was firmly tethered to the ground.

Soon after, the SN2 Raptor was taken off Starhopper, never to be seen again. For two months, no significant testing took place, while SpaceX continued to build a new control center, add more tanks to the launch site, and construct Starship MK1.

On 1 June, Raptor SN4 was delivered to Boca and integrated to Starhopper. For the next two days, engineers performed SN4 fit checks and thrust vector control (gimbal) checks on the engine to confirm operating parameters and pneumatics from Starhopper. After the test, SN4 was taken off Starhopper and trucked off, also never to be seen again.

With the Raptor engines still undergoing testing at McGregor, Starhopper waited another month for Raptor SN6, arriving 10 July 2019. The next morning, SN6 was integrated to Starhopper, starting a week of engine testing in preparation for the static fire.

Today is the 1 year anniversary of Starhopper’s 150m hop. Still some of the most fun I’ve ever had, shooting one of the coolest things I’ve ever photographed/witnessed. Mmm methalox mach diamonds. @NASASpaceflight pic.twitter.com/Z3lEjvraZ1

On the evening of 16 July, the green light was given for the static fire test and Starhopper once again roared to life, this time for a five-second static fire. Shortly following the test, a fireball surrounded Starhopper, starting several fires that were quickly extinguished.

The fireball was caused by a methane vent that became stuck open, spewing the flammable material into the air. The fireball only caused very minor damage. The static fire, however, was considered a success even with the fireball, and after another week of testing and repairs, SpaceX was ready for a much higher hop to 20 meters.

A few hours after the CRS-18 launch scrub on 24 July, SpaceX attempted to hop Starhopper.  Everything proceeded relatively smoothly given the nascent status of the design.  Raptor SN6 ignited on command, but an abort was quickly and safely triggered due to higher than expected chamber pressure within the engine.

A few hours later, SpaceX made another attempt at the hop, but this was also scrubbed due to issues with the liquid methane.

After the abort and scrub, engineers and technicians found plumbing issues that needed to be fixed ahead of another attempt.  The issues were corrected, and SpaceX once again gave the green light for the hop.  After Raptor ignited, Starhopper was held down for five seconds, allowing for engine health checks before the vehicle was released for flight.

Starhopper reached its designated target height of 18-meters and was briefly visible through the exhaust. Starhopper than hovered at 18 meters before the Raptor was throttled down to allow the craft to ease back to the ground after a 22-second flight.

The test was successful, and SpaceX began preparations for a larger 150-meter hop that would also see Starhopper translate over to a dedicated landing pad away from its launch stand. 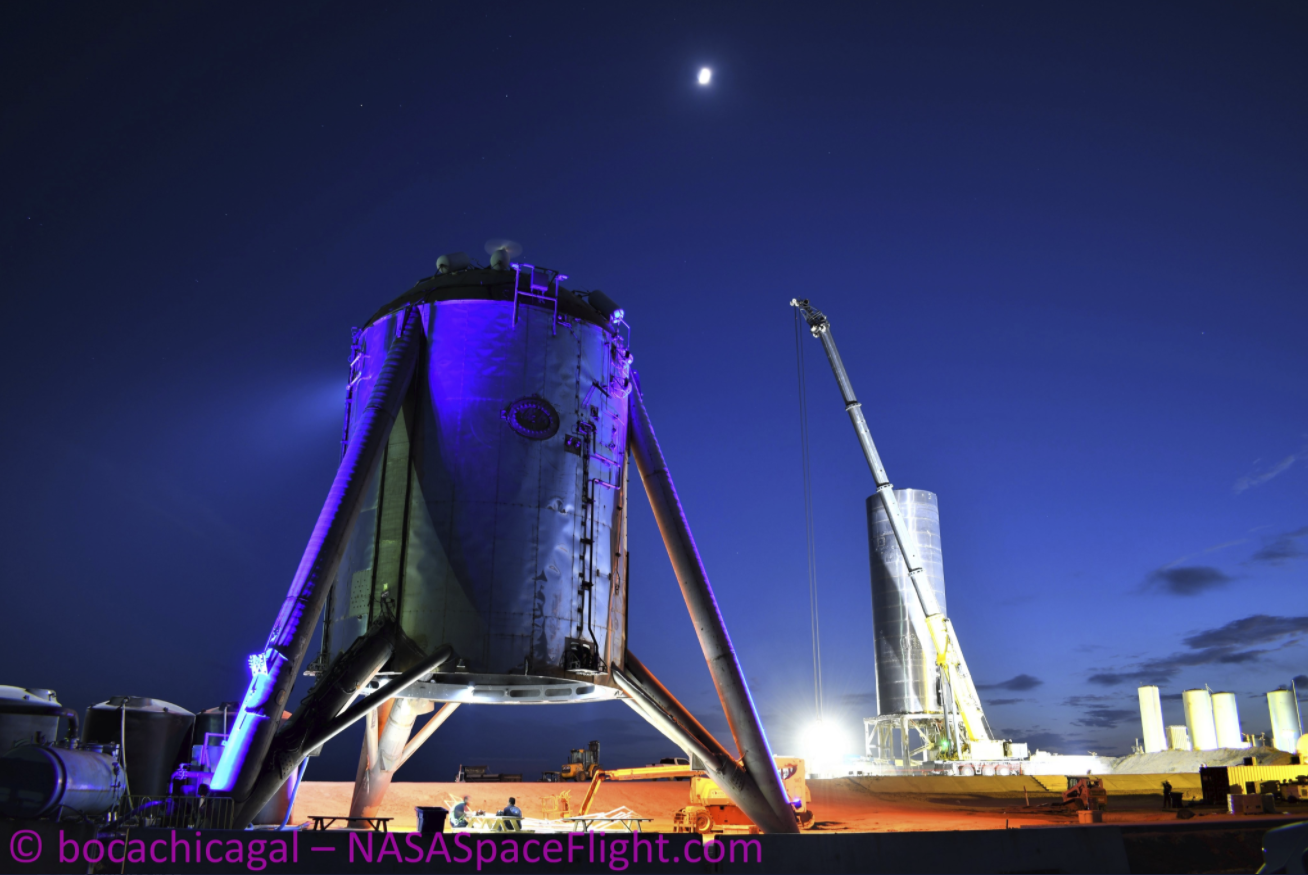 On 26 August 2019, SpaceX attempted the 150-meter hop. However, an abort at T-0 was triggered when the Raptor engine’s igniter suffered an issue.  The component was replaced, with SpaceX moving the hop attempt to 27 August.

Starhopper once again came to life, with a five-second hold down for engine health checks, before slowly rising off its mount and reaching 150-meters. After approximately 20 seconds of flight, Starhopper began to descend to the ground. At 57 seconds, it landed on the landing pad, completing what was to be its final flight.

While the flight was a success, a few issues were noted.

At T+45-50 seconds into the flight, the Raptor’s exhaust started to turn orange. While not known at the time, this was likely caused by a failure, with the plume noticeably turning fuel-rich with an orange glow.

A premature, last-second engine cutoff caused Starhopper to land harder than expected, and a COPV (Composite Overwrapped Pressure Vessel), which in part provided pressurization to the propellant tanks, flew off the vehicle.  The hard landing also caused damage to the concrete the landing pad.

After the successful test, Starhopper was retired and Raptor SN6 was taken off the vehicle. It was also never to be seen again.

Starhopper would later be moved from the landing pad to near the gate at the test site. Its fate was uncertain for some time, with some noting that Starhopper would be converted into a Raptor Engine test stand.

Starship MK1, the first full-scale Starship prototype, was experienced a failure during a cryogenic test on the test stand in November 2019, with SpaceX CEO and Chief Designer Elon Musk revealing that MK1 “had some value as a manufacturing pathfinder, but flight design is quite different.”

Throughout the winter of 2019-20, SpaceX continued to develop and perfect various Starship prototypes, refine their welding techniques as well as materials used for Starship’s construction.  This trail and test process led to Starships SN1, SN2, and SN3 all encountering different but highly illuminating failures during pressure testing that led to the more robust design debuted with Starship SN4 and slight rework of ground procedures.

Starship SN4 became the first Starship prototype to pass cryogenic proof tests on 26 April 2020, after which it underwent numerous static fire tests and tests in preparation for a planned 150-meter hop. Not long after a successful static fire on 29 May, SN4 exploded on the test stand due to a failure of the fuel umbilicals from the ground support equipment.

The SN4 explosion severely damaged the test stand area but largely spared the tank farm. Crews cleaned up SN4 debris and dismantled the test stand before building a new one. The new and current test stand, which is located in the same location that the previous stand once stood, has more equipment than the previous one — including an updated water suppression system.

On 1 July, Starship SN5 completed its cryogenic proof test and preparations were made to the pad to configure it for static fire operations, which occurred on 27 July using Raptor SN27. This paved the way for SN5’s 150-meter hop on 4 August.

SN5 successfully made its hop and landed on the landing pad between the Superheavy launch pad and the test stand similar to what Starhopper flew.

After passing the cryogenic test, SN6 had its static fire test using Raptor SN29 on 23 August. It will soon take flight no earlier than Saturday, 29 August.

The long-awaited Superheavy launch pad — from which orbital Starship missions will launch — began to take shape around 7 July, and just a week later the rebar of the foundation began to rise above the ground. The pad is located east of the test stand and closer to Boca Chica Beach.