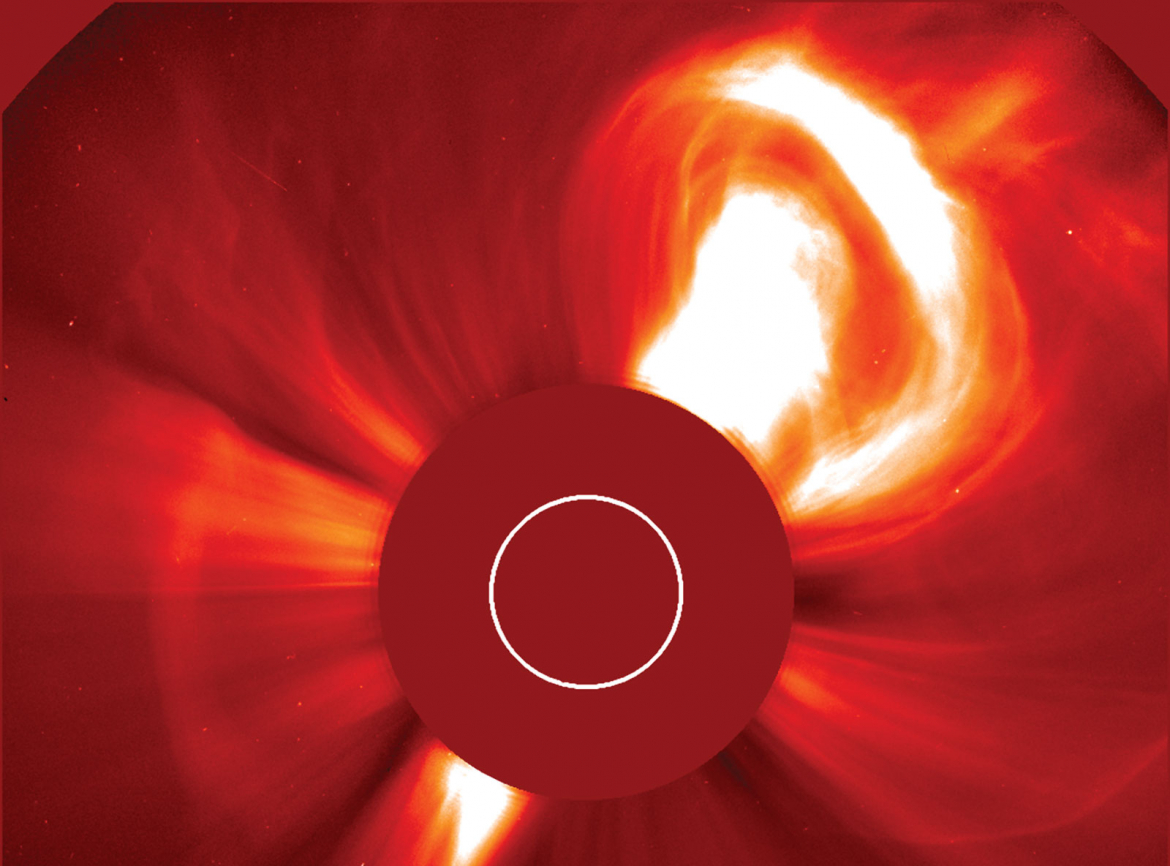 On 28 August 1859, a series of sunspots began to form on the surface of our stellar parent.  The sunspots quickly tangled the Sun’s magnetic field lines in their area and produced bright, observed solar flares and one — likely two — Coronal Mass Ejections, one major.

The massive solar storm impacted our planet on 1-2 September 1859, causing widespread disruption to electrical and Telegraph services and spawning auroras visible in the tropics.

Officially known as SOL1859-09-01, the Carrington Event as it has become known colloquially showcased for the first time the potentially disastrous relationship between the Sun’s energetic temperament and the nascent technology of the 19th century.

It also resulted in the earliest observations of solar flares — by Richard Carrington (for whom the event is named) and Richard Hodgson — and was the event that made Carrington realize the relationship between geomagnetic storms and the Sun.

Coming just a few months before the solar maximum of 1860, numerous sunspots began to appear on the surface of the Sun on 28 August 1859 and were observed by Richard Carrington, who produced detailed drawings of them as they appeared on 1 September 1859.

The same day that the sunspots appeared, strong auroras began to dance around Earth’s magnetic lines, visible as far south as New England in North America.  By 29 August, auroras were visible as far north as Queensland, Australia, in the Southern Hemisphere. 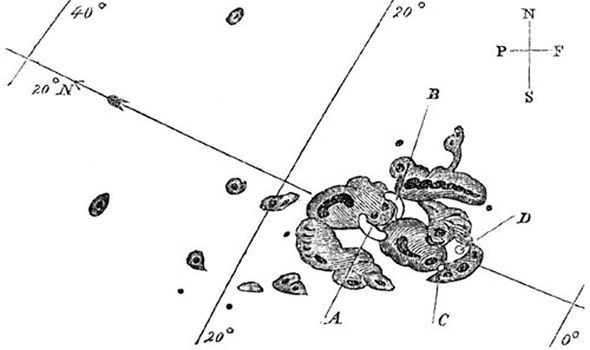 Richard Carrington’s drawings of the sunspots of 1 Sept. 1859, including notations (“A” and “B”) where the solar flare erupted from (“A”) and where it disappeared (“B”). (Credit: American Scientist, Vol. 95)

At the time, the link between auroral displays and the Sun was not yet known, and it would be the Carrington Event of 1859 that would solidify the connection for scientists not only due to observations performed by Carrington and Hodgson but also because of a magnetic crochet (a sudden disturbance of the ionosphere by abnormally high ionization or plasma — now associated with solar flares and Coronal Mass Ejections) recorded by the Kew Observatory magnetometer in Scotland during the major event.

On 1 September, Carrington and Hodgson were observing the Sun, investigating and mapping the locations, size, and shapes of the sunspots when, just before noon local time in England, they each independently became the first people to witness and record a solar flare.

From the sunspot region, a sudden bright flash, described by Carrington as a “white light flare,” erupted from the solar photosphere.  Carrington documented the flare’s precise location on the sunspots where it appeared as well as where it disappeared over the course of the 5 minute event.

What neither could know at the moment is that a major Coronal Mass Ejection (CME) had just erupted from the surface of the Sun and was headed straight for Earth.

The major CME event traversed the 150 million km distance between the Sun and Earth in just 17.6 hours, much faster than the multi-day period it usually takes CMEs to reach the distance of Earth’s orbit.

Follow-up investigations over the last century and a half point to the auroral displays of the 28 and 29 August 1859 as the clue for why the 1 September CME traveled as fast as it did.  It is now widely believed and accepted that a smaller CME erupted from the Sun in late August and effectively cleared the path between Earth and the Sun of most of the solar wind plasma that would normally slow down a CME.

By the time the 1 September event observed by Carrington and Hodgson began, conditions were perfect for the massive storm to race across the inner solar system and slam into Earth within just a few hours.

Late on Aug. 16, the Sun released a B1-class solar flare, the second smallest and a relatively common class of flare. The activity occurred in an otherwise quiet area of the Sun. Images from our SDO show the flare in 3 different wavelengths: https://t.co/GbHpIJLxTY pic.twitter.com/BBPoBpXthk

When the CME arrived, the Kew Observatory’s magnetometer recorded the event as a magnetic crochet in the ionosphere.  This observation, coupled with the solar flare, allowed Carrington to correctly draw the link — for the first time — between geomagnetic storms observed on Earth and the Sun’s activity.

Upon impact, telegraph systems across Europe and North America, which took the brunt of the impact, failed.  In some cases, telegraphs provided electric shocks to operators; in other cases, their lines sparked in populated areas and — in places — started fires.

The event produced some of the brightest auroras ever recorded in history.  People in New England were able to read the newspaper in the middle of the night without any additional light.  Meanwhile, in Colorado, miners believed it was daybreak and began their morning routine.

The strength of the Carrington Event is now recognized in heliophysics as a specific class of CME and is named after Richard Carrington.

Historical evidence in the form of Carbon-14 trapped and preserved in tree rings indicates that the previous, similarly energetic CME event to the one in 1859 occurred in 774 CE and that Carrington-class Earth impact events occur on average once every several millennia.

Still, lower energy CMEs erupted from the Sun and impacted Earth in 1921, 1960, and 1989 — the latter of which caused widespread power outages throughout Quebec province in Canada.  These three events are not considered to have been of Carrington-class strength.

However, a Carrington-class superstorm did erupt from the Sun on 23 July 2012 and narrowly missed Earth by just nine days, providing a stark warning from our solar parent that it is only a matter of time before another Carrington-class event impacts Earth.

Coming shortly after the 2012 near miss, researchers from Lloyd’s of London and the Atmospheric and Environmental Research agency in the United States estimated that a Carrington-class event impacting Earth today would cause between $0.6 and $2.6 trillion in damages to the United States alone and would cause widespread — if not global — electrical disruptions, blackouts, and damages to electrical grids.

Cascading failures of electrical grids, especially in New England in the United States, are also particularly likely during a Carrington-class event.  Power restoration estimates range anywhere from a week to the least affected areas to more than a year to the hardest-hit regions.

Electronic payment systems at grocery stores and gas stations would likely crash, electric vehicle charging stations — that rely on the power grid — would likely be unusable for some time, as would ATMs which rely on internet and/or satellite link to verify account and cash disbursement information. 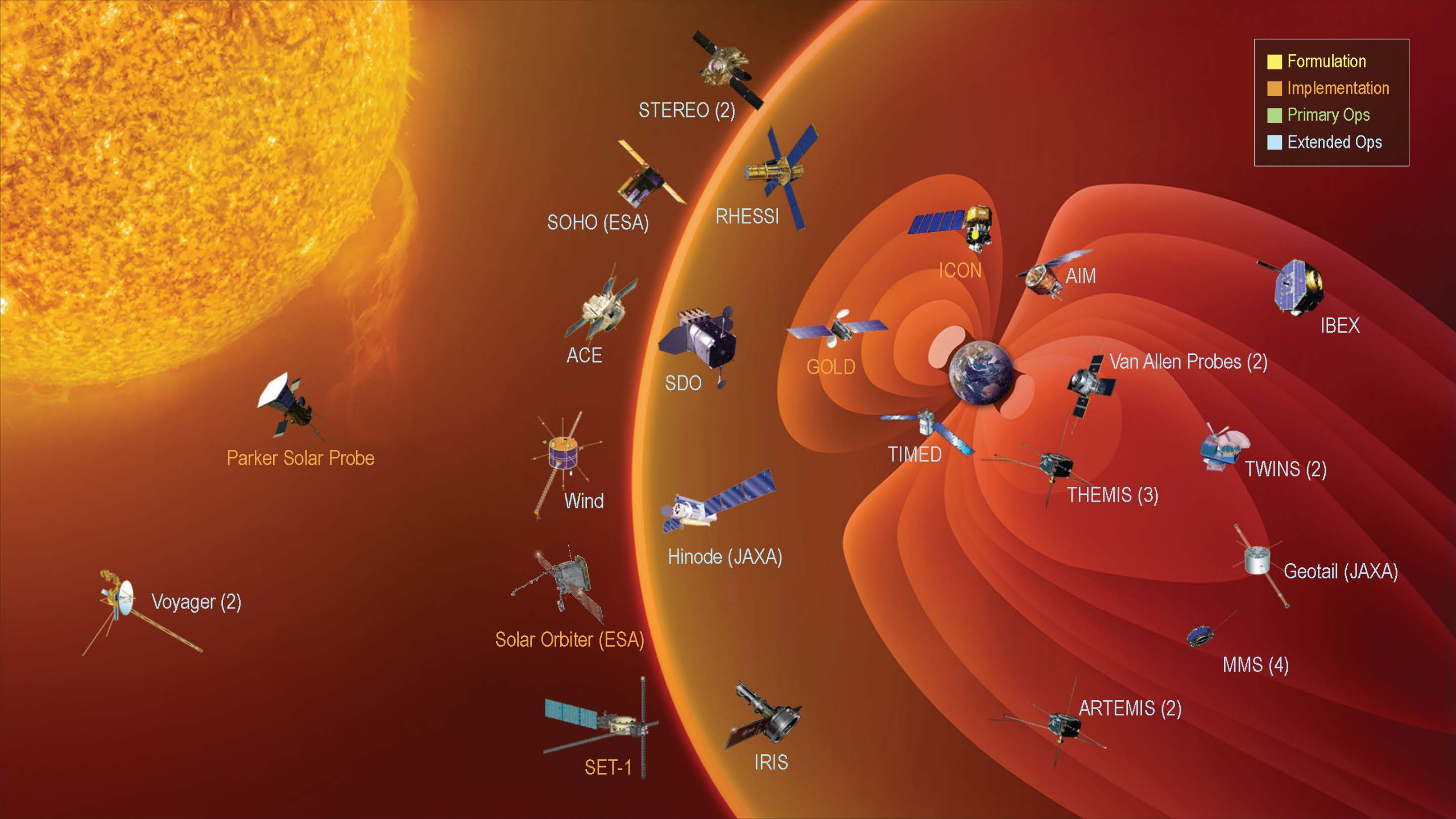 The world’s heliophysics fleet of spacecraft that keep constant watch on the Sun. (Credit: NASA)

Television signals from satellites would be majorly disrupted, and satellites, too, would experience disruptions to radio frequency communication, crippling GPS navigation.

Planes flying over the oceans would likely experience navigation errors and communications blackouts as a result of the disrupted satellite network.

Astronauts onboard space stations would either seek shelter in a radiation-hardened modul or, if enough time permitted and the CME event was significant enough, enter their return spacecraft and come home.

The question of exactly how to best protect astronauts on the Moon or at destinations farther out in the solar system is an on-going discussion/effort.

Unlike 1859, however, today, we have an international fleet — including the Solar Dynamics Orbiter, SOHO, the Parker Solar Probe, and the European Space Agency’s (ESA’s) Solar Orbiter — of vehicles constantly observing the Sun and seeking to understand the underlying mechanisms that generate sunspots, solar flares, and Coronal Mass Ejections, which while linked to one another do not automatically follow each other.

Understanding the underlying mechanisms that trigger CMEs and how severe they would be is a key driving force for heliophysicists.  But even with the current fleet in space, all scientists can really do at this moment is provide — at best — a multi-day warning that a CME has occurred and is heading toward Earth.

Simply having a multi-day warning would give us time to shut down power stations and transformers, stop long-haul and transoceanic flights, and basically hunker down and wait for it to pass.  The best we could do now is simply try to minimize the damage.

It would take a large financial and time and workforce commitment to preemptively rebuild power grids and communications systems in a way that they could fully withstand a Carrington-class CME, and that is something governments around the world have shown little to no interest in doing.

Still, the Parker Solar Probe from NASA is literally diving into the solar corona to try to unlock the mystery of how Coronal Mass Ejections form and accelerate to incredible velocities as they leave the Sun. What’s more, ESA’s Solar Orbiter mission is attempting to complement that data by looking at the Sun and observing it from an orientation never before possible.

But a harsh truth remains: 161 years after the Carrington Event, the world is still not prepared for a large-scale solar storm and what it would do to us.

The nine day near miss of the 2012 Carrington-class event should have been a major wake-up call, especially given technological advancements and our dependence on it for everyday life.

But its warning does not appear to have been heeded as well as it should have.

(Lead image: A Coronal Mass Ejection erupts from the Sun on 2 December 2002 as seen by the Solar and Heliospheric Observatory — SOHO)