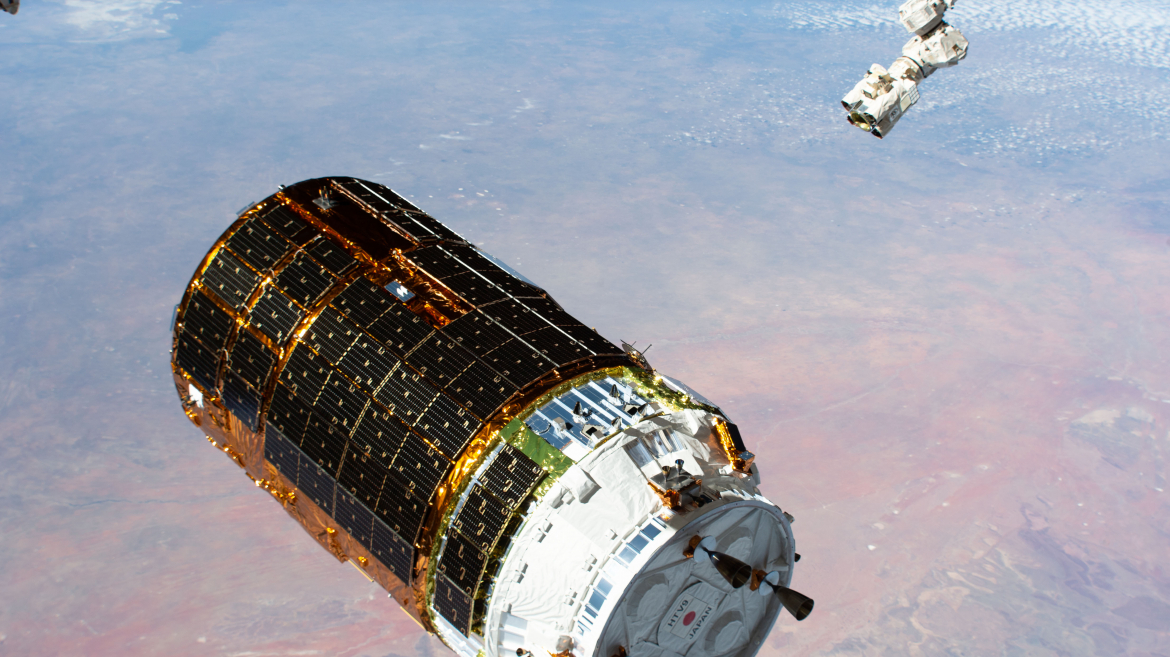 The golden cargo resupply vessel will now spend its remaining days free-flying in low Earth orbit before performing a final burn to end its mission with a fiery reentry into Earth’s atmosphere.

The H-II Transfer Vehicle was developed by JAXA as part of the agency’s contribution to the International Space Station program. Like many Japanese spacecraft, it has two name — with its alternative name being Kounotori, or “white stork”.

The HTV-9 or Kounotori 9 mission concludes a series of resupply missions to theStation flown by JAXA’s HTV over a nearly 11-year period. This mission marked the ninth visit to the orbital laboratory by an HTV spacecraft. Following its retirement, the enhanced next-generation HTV-X series of cargo resupply vessels is expected to begin launching on the newly-designed H3 rockets in the near future.

The first Kounotori spacecraft launched to the ISS in September 2009, arriving at the outpost seven days afterwards and departing in October after a 43-day stay. Seven more HTV spacecraft followed it with successful missions to and from the Station, with HTV-9 marking the ninth and last visit. 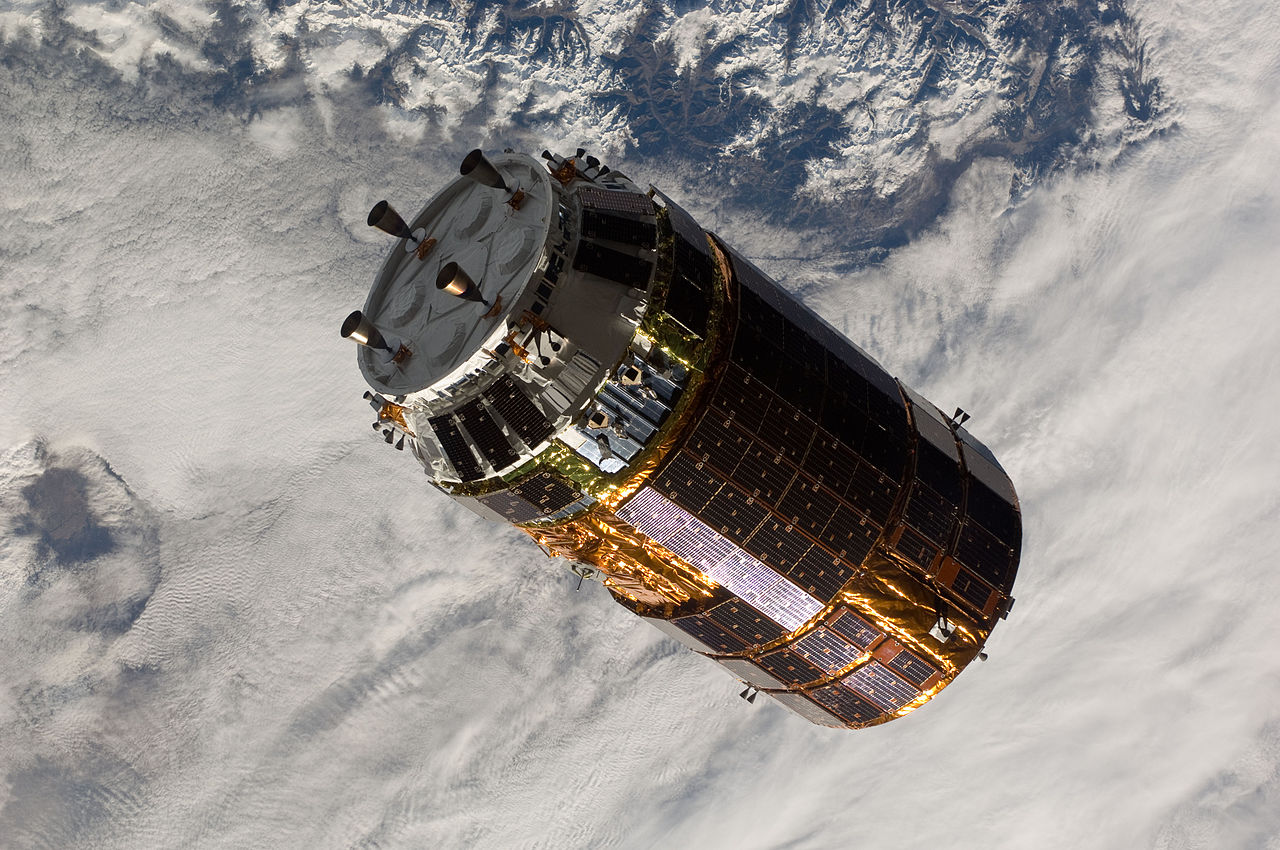 Like the eight spacecraft that journeyed to the International Space Station before it, the Kounotori 9 vessel was built by Mitsubishi Electric. It stands at 10 meters (33 feet) in length, measures 4.4 meters (14 feet) in diameter, and is outfitted with four HBT-5 thrusters – built by IHI Corporation – which burn monomethylhydrazine (MMH) and mixed oxides of nitrogen (MON-3 — which consists of 3 parts nitrogen monoxide to 97 parts dinitrogen tetroxide). Twenty-eight smaller thrusters are used to provide attitude control and maneuvering capability.

LAUNCH! JAXA H-IIB launches for the final time with the last HTV cargo vehicle (The H3 rocket will take over with HTV-X vehicle).

The HTV-9 spacecraft began its mission atop the final Mitsubishi Heavy Industries H-IIB rocket, which successfully launched from LA-Y2 at the Tanegashima Space Center on May 21 local time (May 20 UTC). After a four-day chase, HTV-9 rendezvoused with the ISS, was captured by Canadarm2, and then was berthed at the nadir – Earth-facing – port of the U.S. Harmony node module.

HTV-9 delivered approximately four tons of supplies and experiments to the orbital complex, including a series of new lithium-ion batteries that were used to upgrade the Station’s electrical power systems. The new-technology batteries were installed through a series of EVAs, or spacewalks, along the far port truss of the Station, conducted by NASA astronauts Robert “Bob” Behnken and Chris Cassidy in June and July 2020, respectively.

Kounotori 9 remained berthed until August 18, as the Station crew unloaded its cargo and replaced it with material and hardware to be disposed of — including eight of the outpost’s old batteries.

Following the loading of disposable cargo into the HTV-9 spacecraft, the vehicle and ISS hatches of the Common Berthing Mechanism (CBM) — a port on the U.S. Operating Segment (USOS) of the Station that connects two habitable elements — were closed.

Following CBM vestibule depressurization, 16 bolts that held the Kounotori 9 spacecraft to the Station were removed in four stages of four bolts. This officially marked the detachment of the vehicle from the ISS.

Over the following few hours, the Station’s robotic arm maneuvered HTV-9 to the release position around 10 meters (30 feet) below the Station. Canadarm2 was controlled by ISS commander Chris Cassidy of NASA, with Ivan Vagner of Roscosmos serving as his backup.

After a period of around 90 seconds following release, the Station crew sent the retreat command to HTV-9 — which initiated the departure sequence burns.

In total — per the official timeline — four departure burns were called for, known as ISS Departure Maneuver (IDM) -1 and -2, followed by Descending Maneuver (DSM) -1 and -2. With the completion of these burns, ISS and HTV-9 integrated operations officially came to a close.

The Kounotori 9 spacecraft will spend two more days orbiting the Earth before conducting a series of burns to ensure that it re-enters the atmosphere over an unpopulated region of the Pacific Ocean. HTV cargo vessels were not designed to be recovered, so the mission will end with a fiery and destructive reentry.

Following its demise, JAXA will officially retire the H-II Transfer Vehicle program in favor of the improved HTV-X cargo resupply vessel, which aids in design simplification and cost reduction efforts. The first HTV-X spacecraft is currently set to fly on an H3 rocket no earlier than 2022.

Following the launch of Kounotori 9 in May, Mitsubishi Heavy Industries retired their medium-lift H-IIB launcher after nine successful flights in order to shift their focus towards preparing the H3 for its maiden flight.

The H3 utilizes a series of new LE-9 first stage engines and is capable of delivering approximately 7,900 kilograms (17,400 pounds) to a geostationary transfer orbit in its most powerful configuration. The first H3 rocket is slated to launch the Advanced Land Observation Satellite 3 (ALOS-3) spacecraft to a Sun synchronous orbit no earlier than the end of the 2020 Japanese fiscal year.

With the departure of HTV-9, the International Space Station is now preparing to support the passing of the torch between the Expedition 63 and 64 crews, starting no earlier than October 14 with the launch and arrival of the Soyuz MS-17 spacecraft. NASA astronaut Kate Rubins, along with Roscosmos cosmonauts Sergey Ryzhikov and Sergey Kud-Sverchkov, will serve as part of the Expedition 64 crew.

One week after Soyuz MS-17’s arrival, Chris Cassidy, Ivan Vagner, and fellow Russian cosmonaut Anatoly Ivanishin will enter the Soyuz MS-16 spacecraft, depart the orbiting laboratory, and return to land in the steppes of Kazakhstan under parachute, thereby bringing the Expedition 63 mission to an end.

After safely returning Crew Dragon Endeavour and NASA astronauts Robert “Bob” Behnken and Doug Hurley from the ISS on August 2 (thereby marking the completion of the SpaceX Crew Demo-2 mission), NASA and SpaceX are now pressing towards the launch of SpaceX Crew-1, which will serve as the first operational crew rotation mission for the Hawthorne-based company and their Crew Dragon spacecraft.

NASA astronauts Mike Hopkins, Victor Glover, Shannon Walker, and JAXA astronaut Soichi Noguchi will make up the prime crew for the mission, which is currently scheduled to launch from historic Launch Complex 39A at NASA’s Kennedy Space Center in Florida no earlier than October 23.